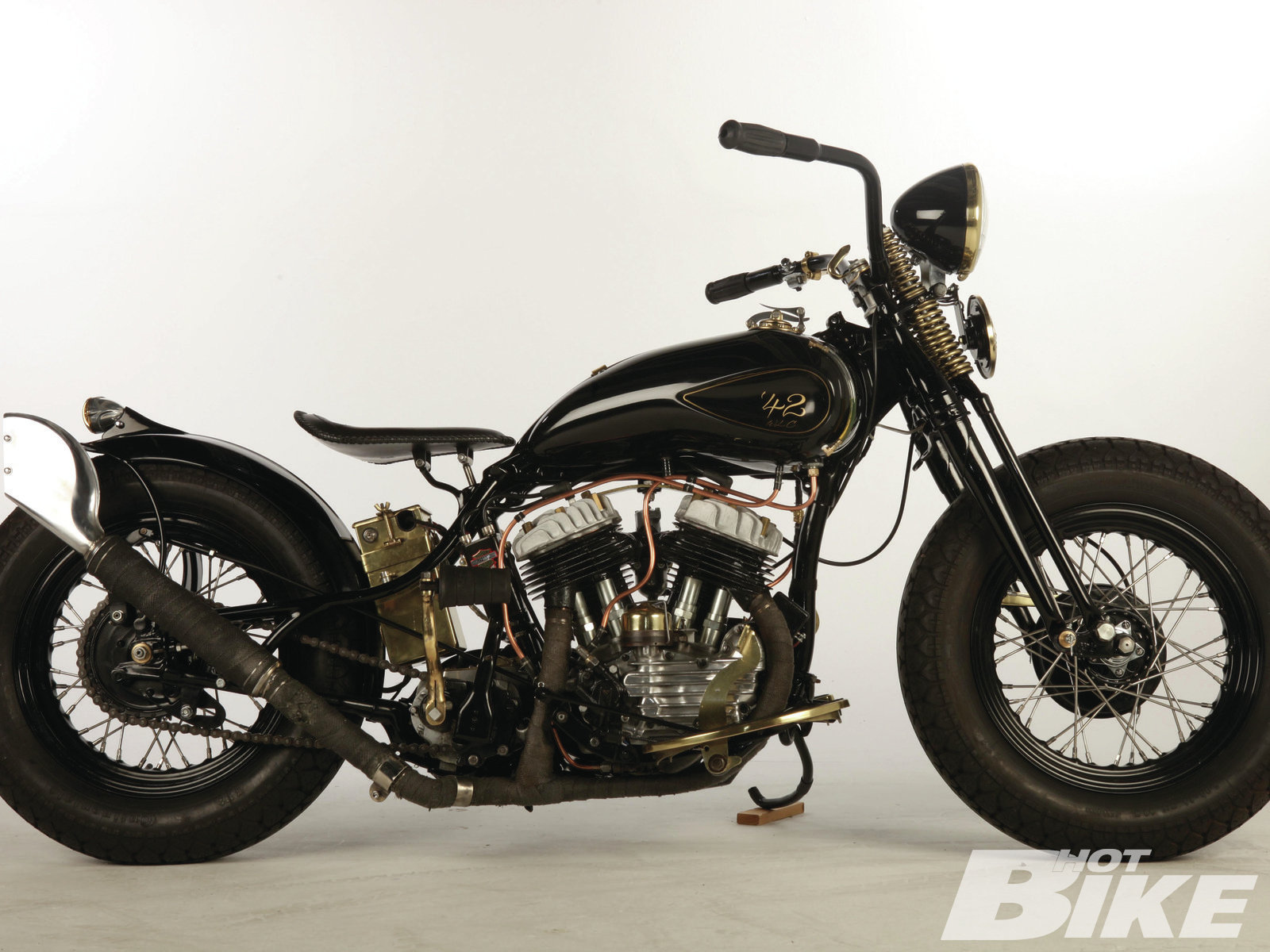 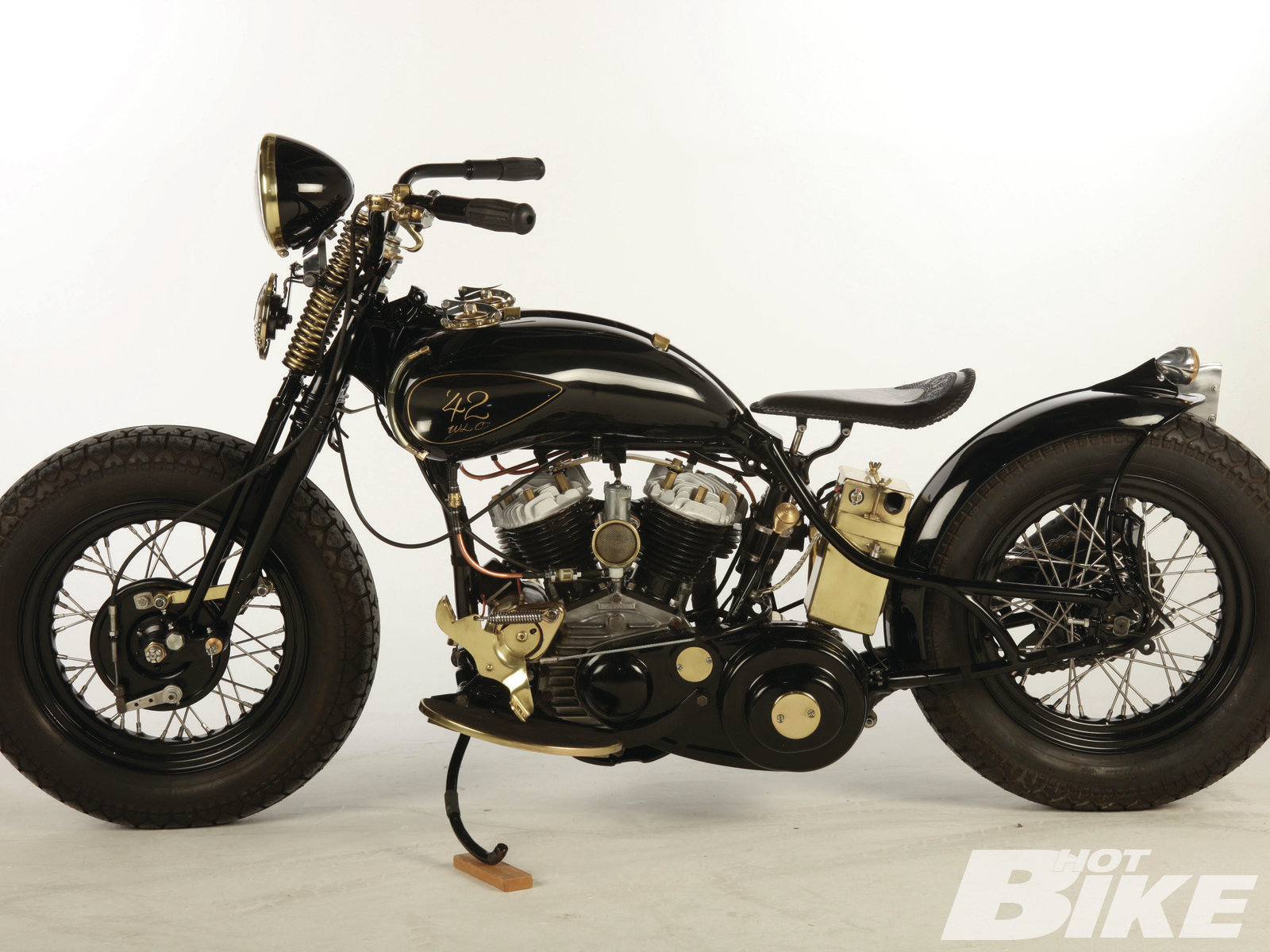 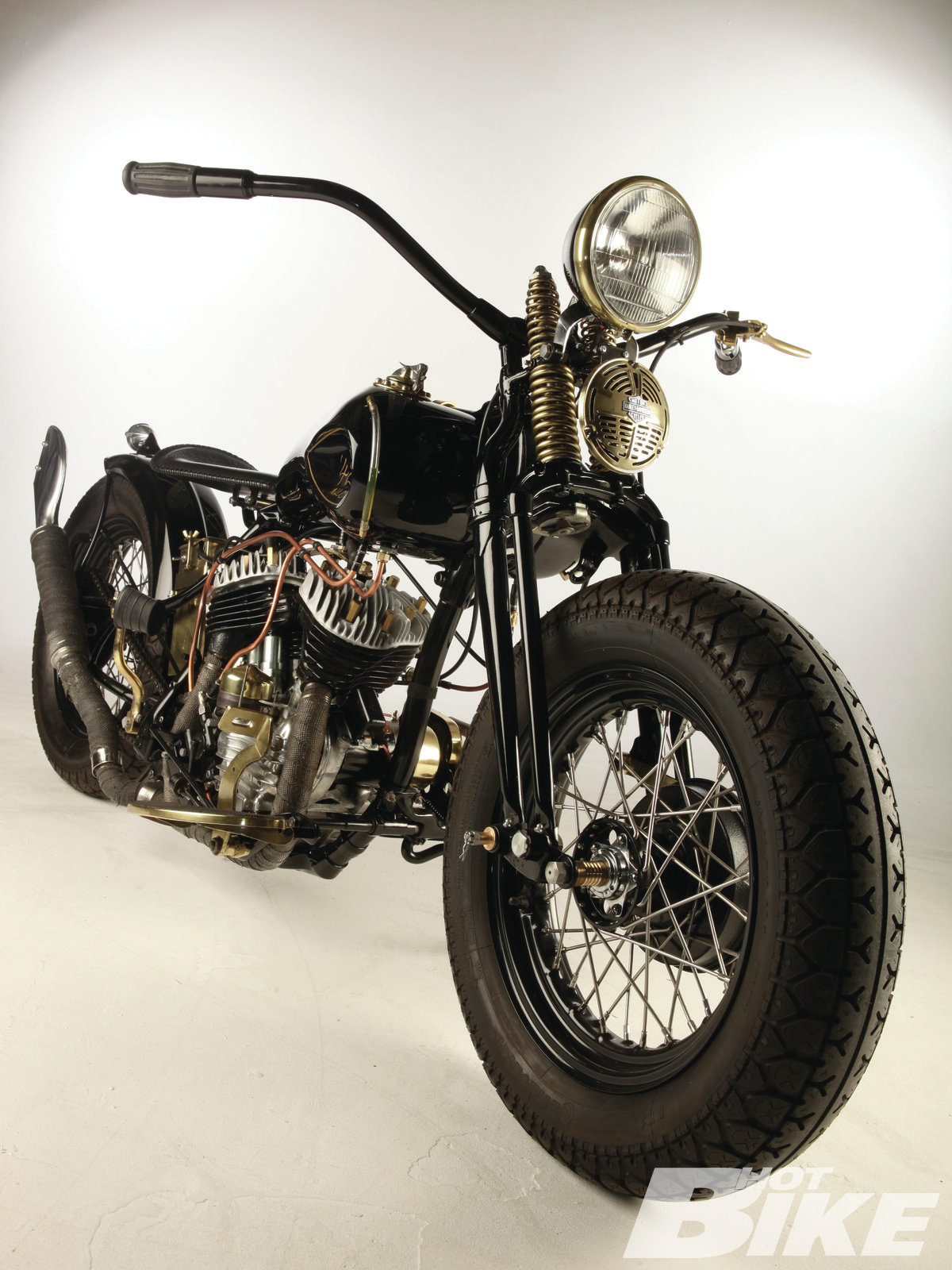 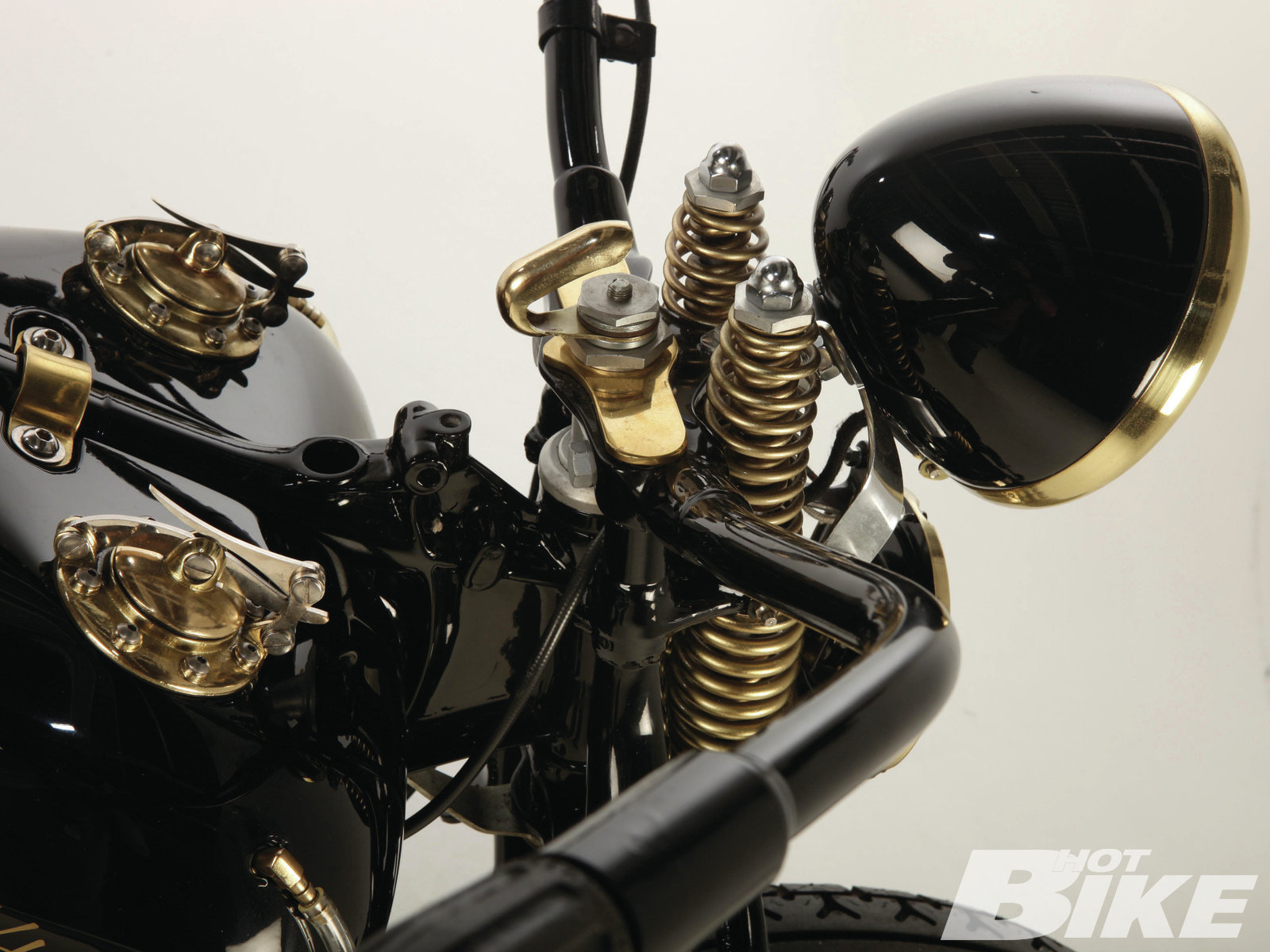 Crime Scene Choppers’ filler caps look right at home on the two-piece “petrol” and oil tanks. Rear lighting is from Crime Scene, but the headlight is original ’42 H-D with a conversion to 12-volt for modern power. 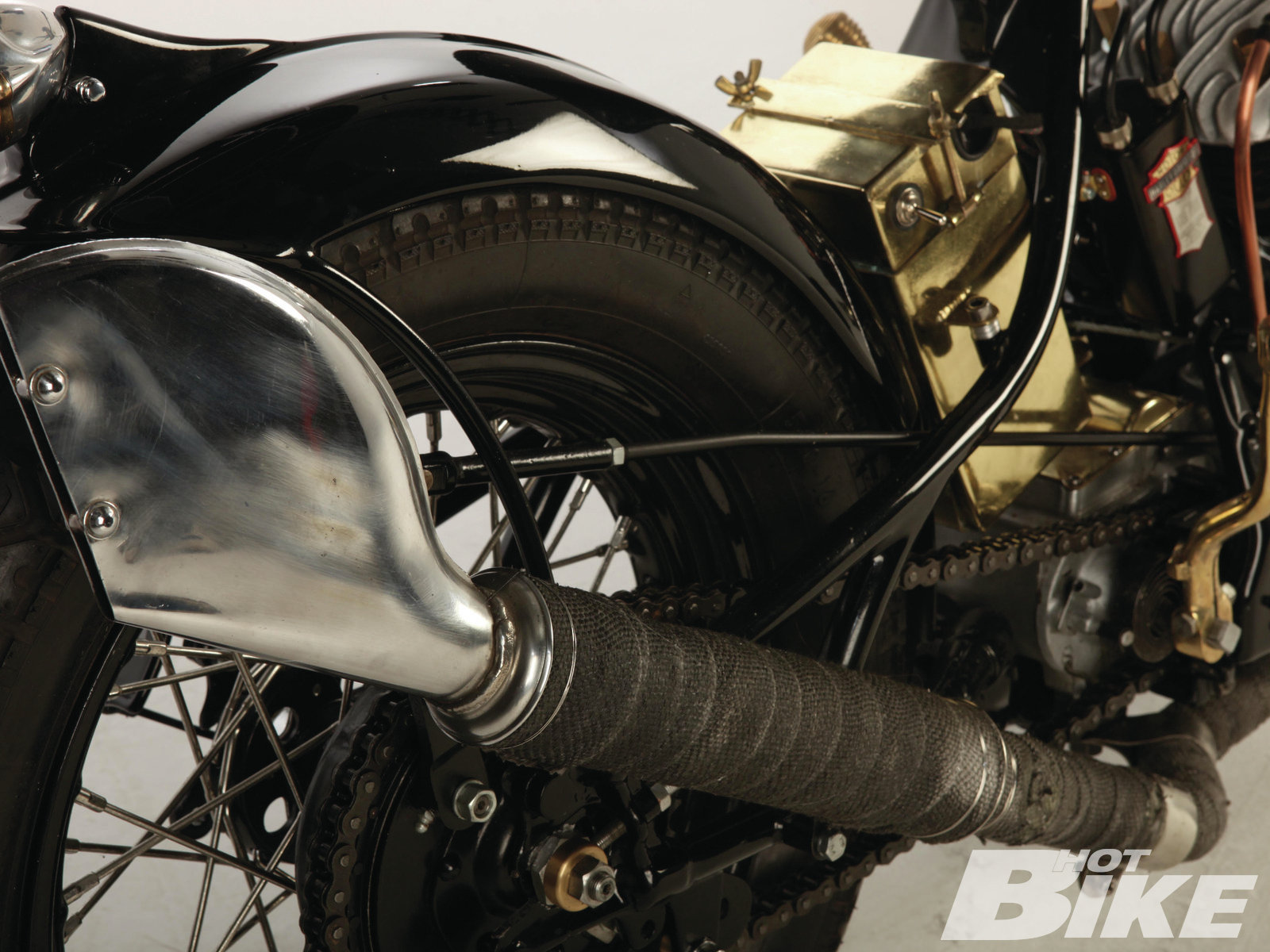 Most builders would have built their own or sought a reproduction exhaust for a project such as this. Nick decided to embrace the 70-year-old original exhaust and wrap the pipes to hide the blemishes. It’s not perfectly original though. Nick kicked the rear of the pipe up to add a touch of flair. 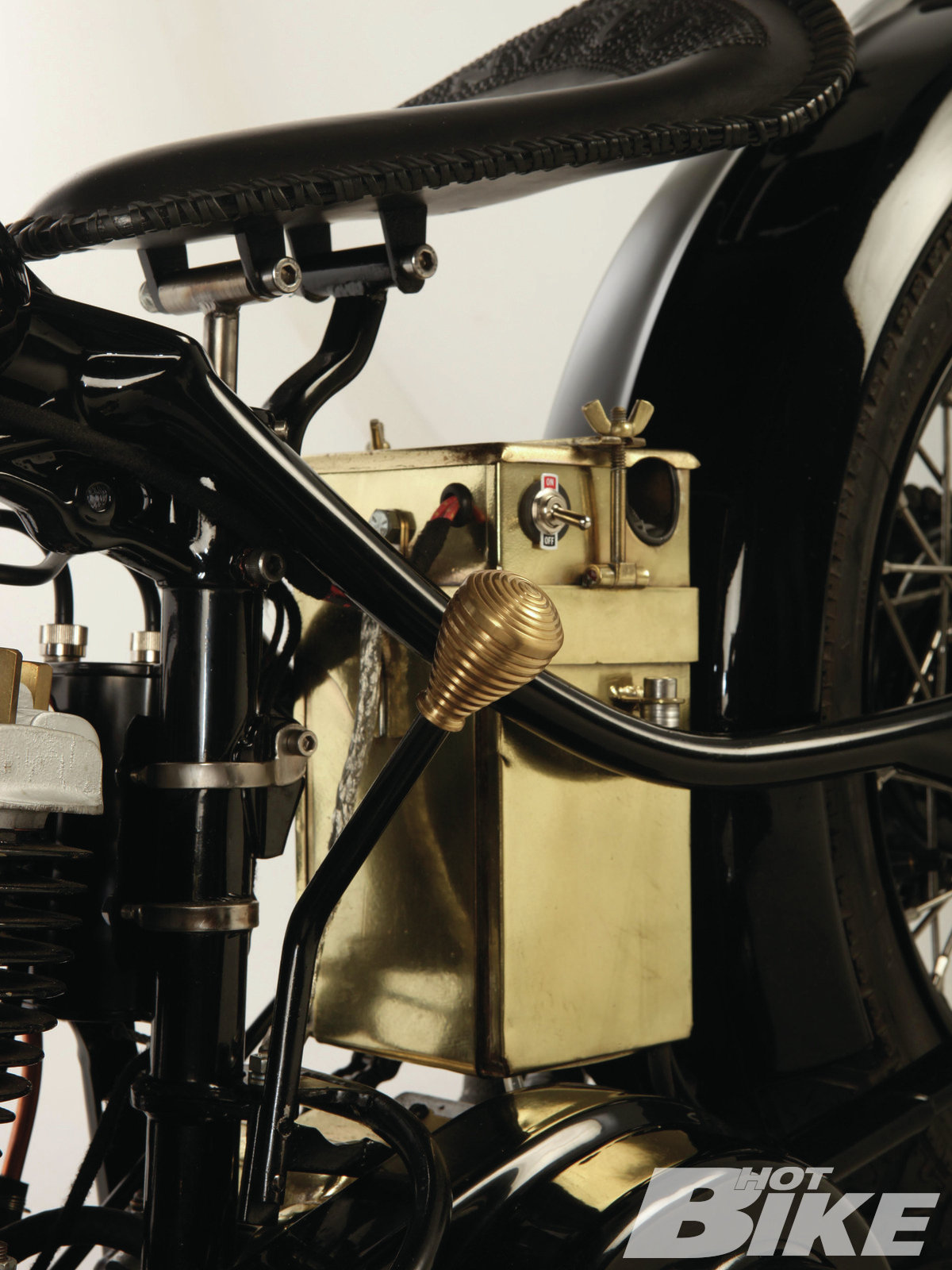 To hide the battery, a brass enclosure was created to better flow with the heavily modified rear frame legs. A simple on-off switch energizes the ignition prior to kicking the 45-inch Flathead to life. The owner-built seat pivot rides on a spring buried in the original seat post. It’s said to be a very comfortable design. 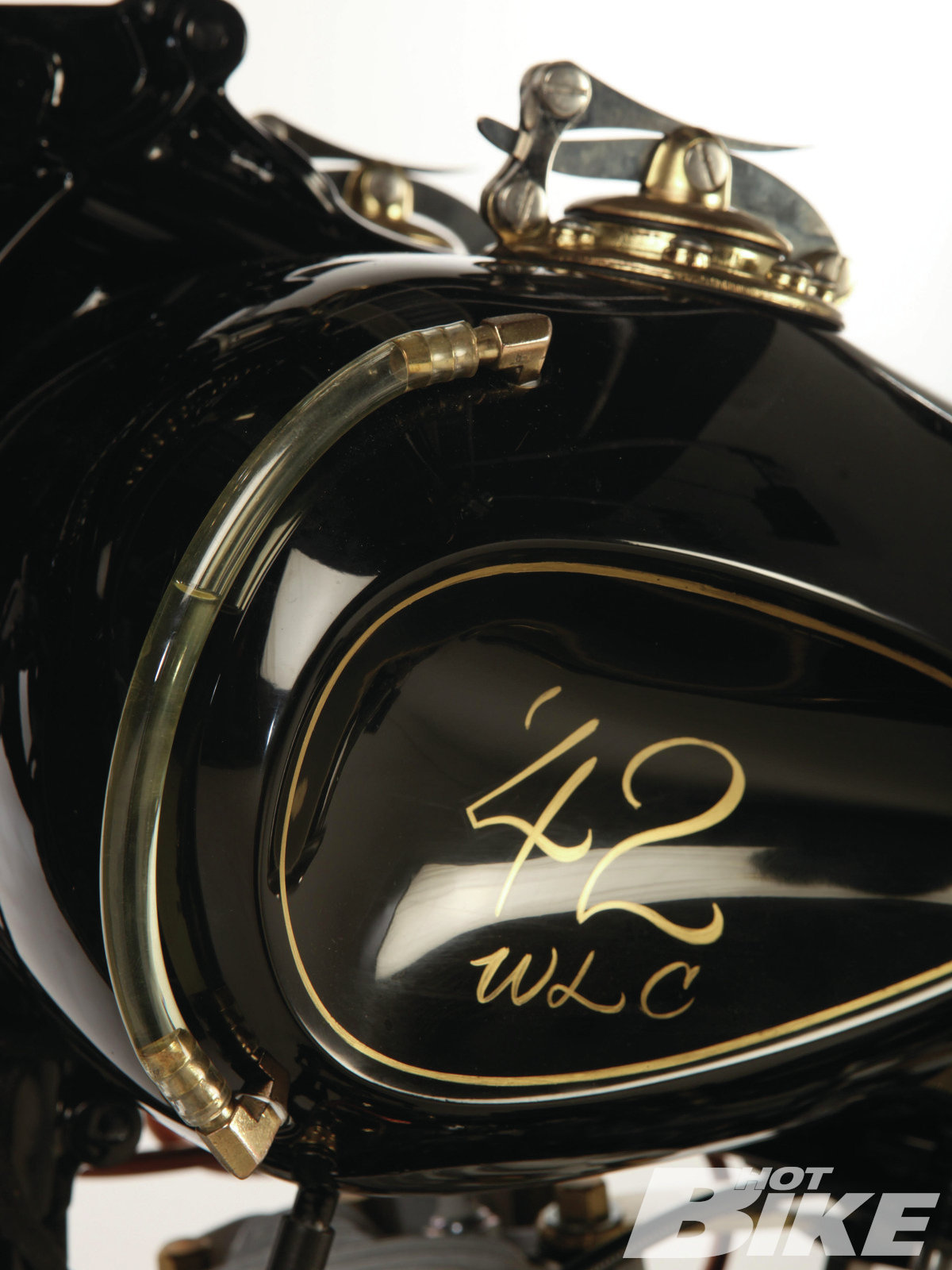 So many amazing stories have been brought to light over the decades, chronicling the elusive “barn find” that it would seem nearly impossible that any more could exist. Time has taught us many lessons and none are more prevalent than the fact that history repeats itself. Of course, given enough time, anything is possible, but the story behind this ’42 Harley-Davidson WLC seems hardly able to see a sequel. A genuine barn find makes for a good enough story, but a WWII Harley covered in Honda bits and stashed in a barn in rural Devon, England? Well that just has a nice twist to it.

Builder Nick Gale tells us, “I found it whilst visiting a relative 10 years ago. I got to talking to a local farmer whilst walking my dog one night and he told me he had an old bike his father had purchased in 1945 from a Canadian soldier at the end of the war (WWII). He told me he thought it was a Harley, and I could buy it if I wanted. The bike had stayed in the barn from 1945 until 1981 when the farmer decided to customize it and get it running. Looking over the bike, it had 18-inch wheels front and back from a Honda, an old Honda petrol tank, Honda fenders, a Suzuki headlight, handlebars from an Ironhead Sportster, a hand clutch, and a huge Vincent sprung seat. The farmer had painted the entire bike yellow, including all the nuts and bolts.” Nick goes on to say that the bike had long-expired UK registration and after inspecting the engine, forks, and frame ensuring they were correct, he sealed the deal for the equivalent of $1,200. “Once home, I got the bike running and was pleased to see there was no knocking sounds, no smoke, and as with all ’42s, once on the road, no brakes either.”

The drop seat idea came about when we cut the back off.

To prepare the Harley for its reincarnation, it was stripped to nothing and thoroughly gone through bolt by bolt. Two NOS 16-inch wheels were purchased to replace the Honda wheels and the first snafu was encountered. Rolling the front wheel under the springer forks was easy enough, but the farmer had heated and bent the rear of the WLC’s frame to make room for the Honda wheel to fit. With more than one “friend” telling him to scrap it, Nick decided to keep the original frame and just get a little funkier with the build. In his words, “The drop seat idea came about when we cut the back off.” We used all the original pipe work and decided to shape the backbone too. And the frame was born. The hardest part was making the seat plunger to enable us to use a new seat lowered by a good few inches from stock. It took four hours with a club hammer to release the old seat post that had been welded in.” From here the story goes stale. After acquiring the bike in 2001 and getting the frame into shape, customer needs prevailed and the old H-D was boxed up and shelved for another day. That day did not come for another 10 years. In early 2011 the boxes were opened up and readied for work again.

Breaking open the 45-inch engine revealed another whirlwind find. To Nick’s delight, the inside was like new and with the crank split, the original 70-year-old grease spilled out. Checking closely showed completely unmarked internals with matching numbers. After putting the entirely stock 750cc Flathead back together, the Amal carburetor was rebuilt and topped with a brass velocity stack. The rest of the engine received brass accents over fresh paint and all oil and fuel lines were created with hand-bent copper tubing. The bike came with a battered and dirty clamshell exhaust. To hide 70 years of abuse, the pipes were wrapped to hide the blemishes and a bend allows the pipe to kick up a bit for added style. Nick says, “The gears are changed by a small shifter we made and still runs the mouse trap clutch. All brakes and clutch mechanisms are original as are all the switchgear, levers, and cables. All parts were sourced as original or new old stock to do what H-D intended 70 years ago. The bike starts first or second kick and even the hill brake works…sort of.”

Bodywork was kept minimal and carries an original look, but that’s where the similarities stop. The rear fender began life as a Triumph piece that was adapted with a custom set of struts and backed with a Crime Scene Choppers taillight. Adding some across-the-pond flair, the license tag is designed to look like an old English pub sign. What would you expect from any self-respecting English bike builder? Looking deeper into the “petrol” tank, it becomes clear some extra effort was done. Nick designed and built the unit in two interlocking parts similar to the original but with a little more flair and a curve more in line with the frame modifications. Fluid caps for both the gas and oil are from Crime Scene Choppers. Setting atop the heavily massaged seat pivot is a one-off leather seat designed by Colne Creek Moto. The seat rocks off the frame mounts to a spring inside the old seat post tube. All the rest of the parts are original ’42 Harley WLC or new old stock.

A deep black finish was applied to all the exposed metals with gold accents painstakingly applied by hand. Within two days of its six-week transformation, the ’42 WLC was shown at the South of England Rally and came home with its first trophy as winner of the Best Professional Category. Two weeks later it made an appearance at the 25th anniversary of the Bulldog Custom show winning Best Classic. After sitting in boxes for 10 years, Nick realized that if he didn’t find the time to do something with the Harley, it would be subject to another 10 years of sitting there. It went from a must-do project into a labor of love, and then turned into an obsession. Nick sums it up best, “It is a joy to ride once you get used to it. I, for one, love it to death!”