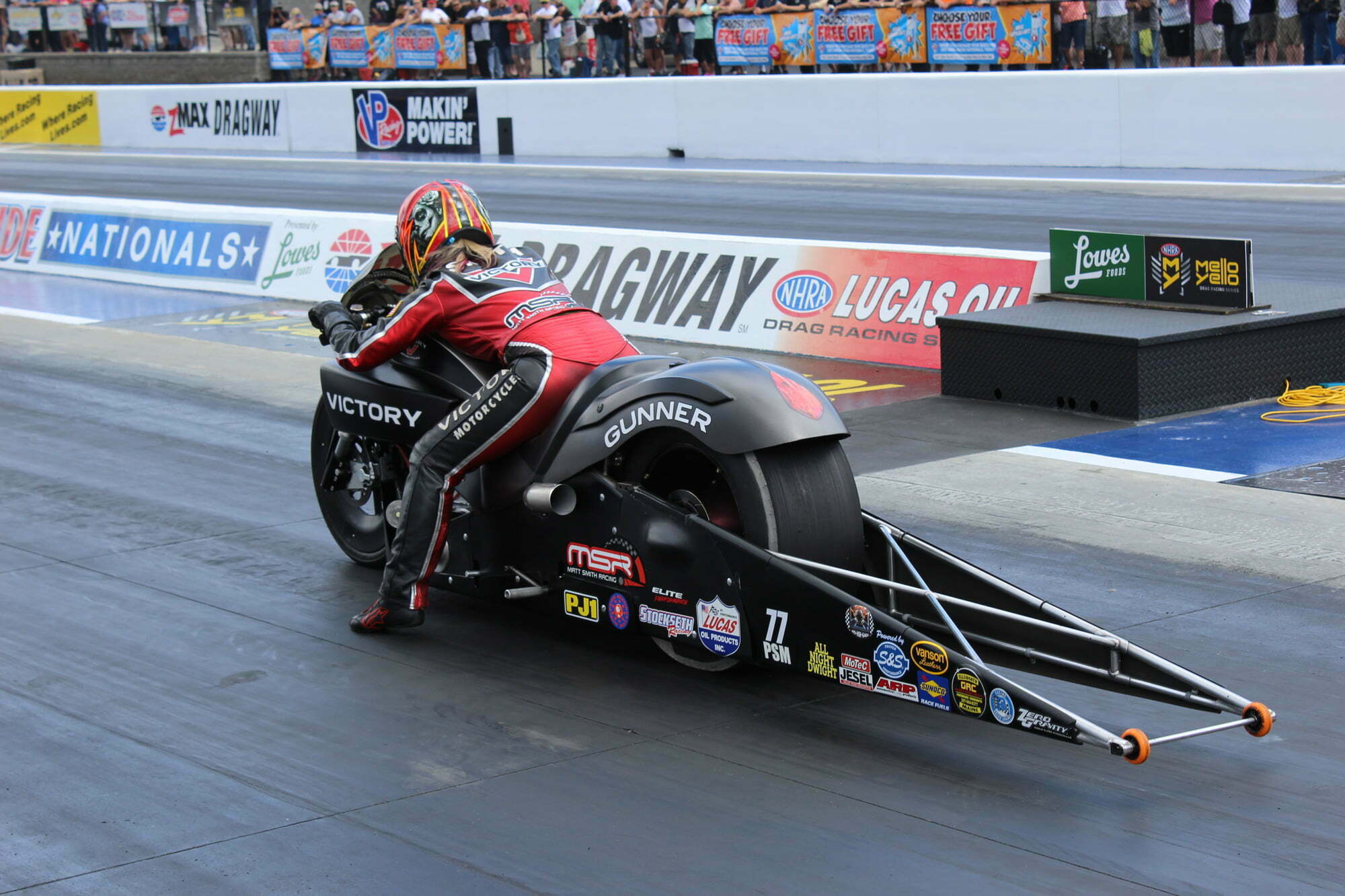 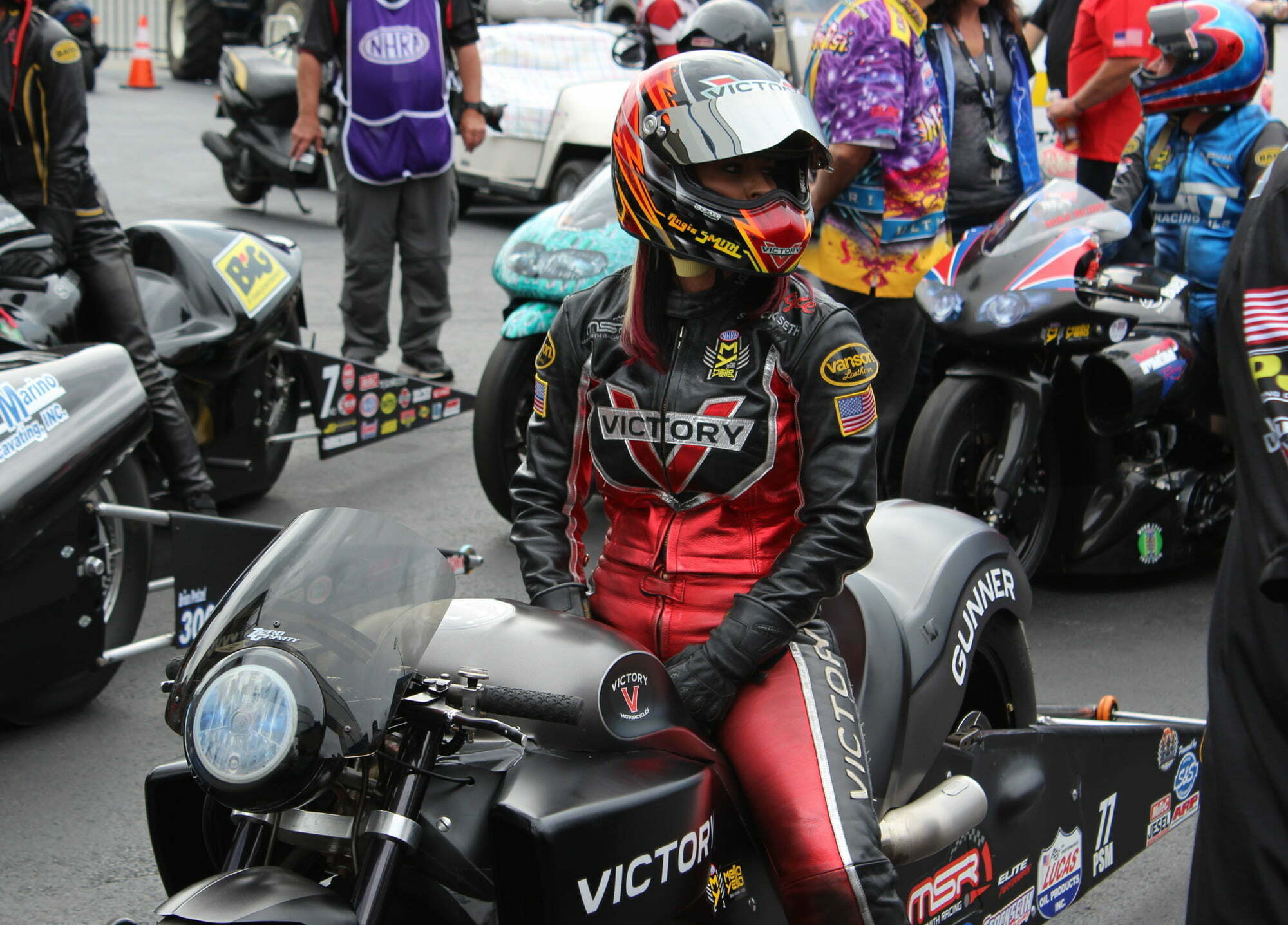 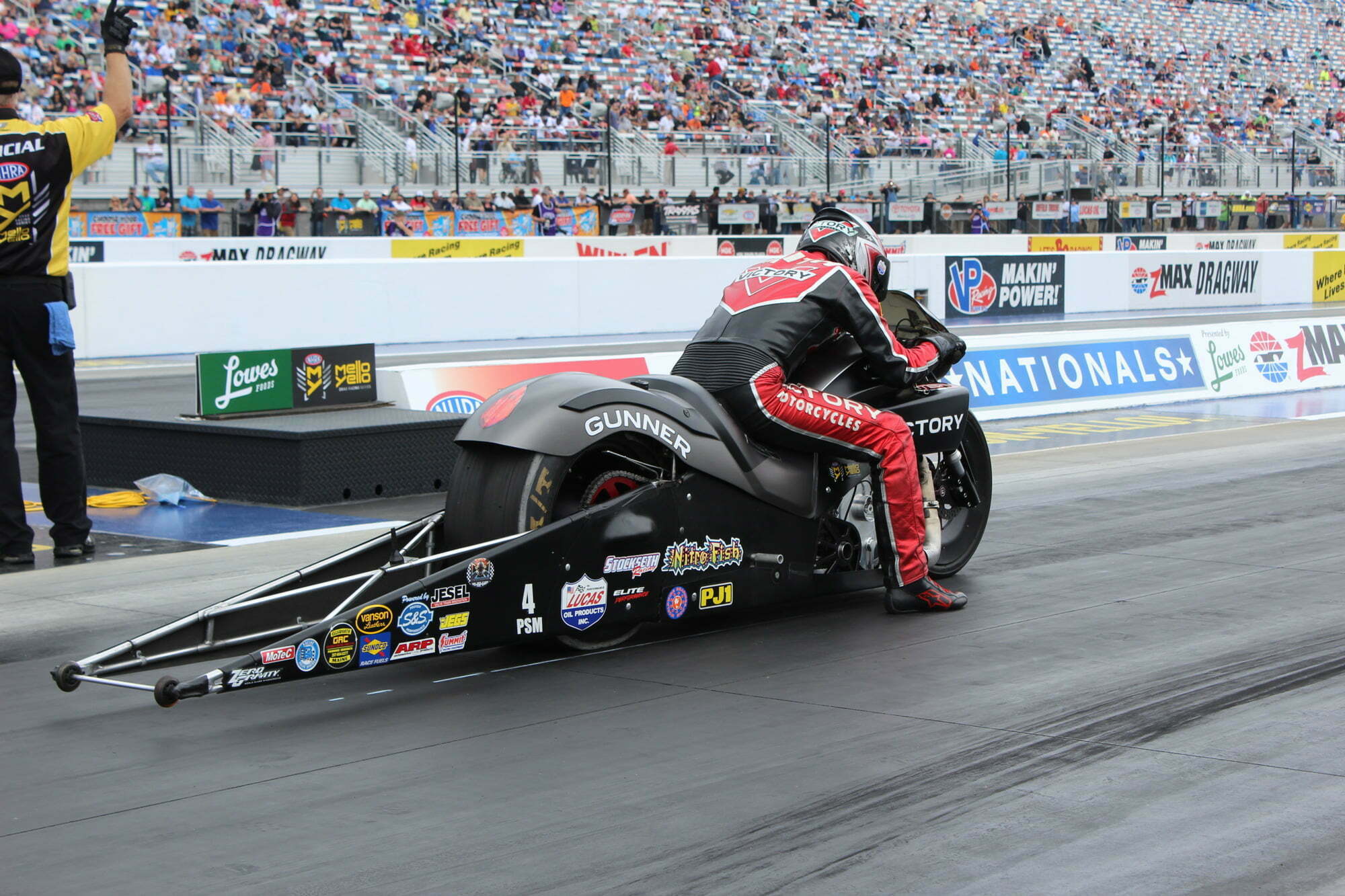 The unique Four-Wide Nationals at zMax Dragway had four bikes battling each other during each pass. Rather than two riders side by side reacting to one Christmas Tree start, there were four riders responding to two separate Trees.

While Angie Smith retired her Victory Gunner following the final qualifying session on April 23, Matt Smith continued through the field and – as the quickest Pro Stock motorcycle in Saturday’s qualifying – found himself in the next day’s Four-Wide final round. Elimination Round 1 saw him roar down the dragway in a time of 6.844 sec. at 195.03 mph and move into Elimination Round 2, where he covered the quarter mile in 6.850 sec. at 195.00 mph. Then, in the Final Round, lined up against Andrew Hines, Eddie Krawiec and Chip Ellis, he launched late and watched Hines pull away for the win. 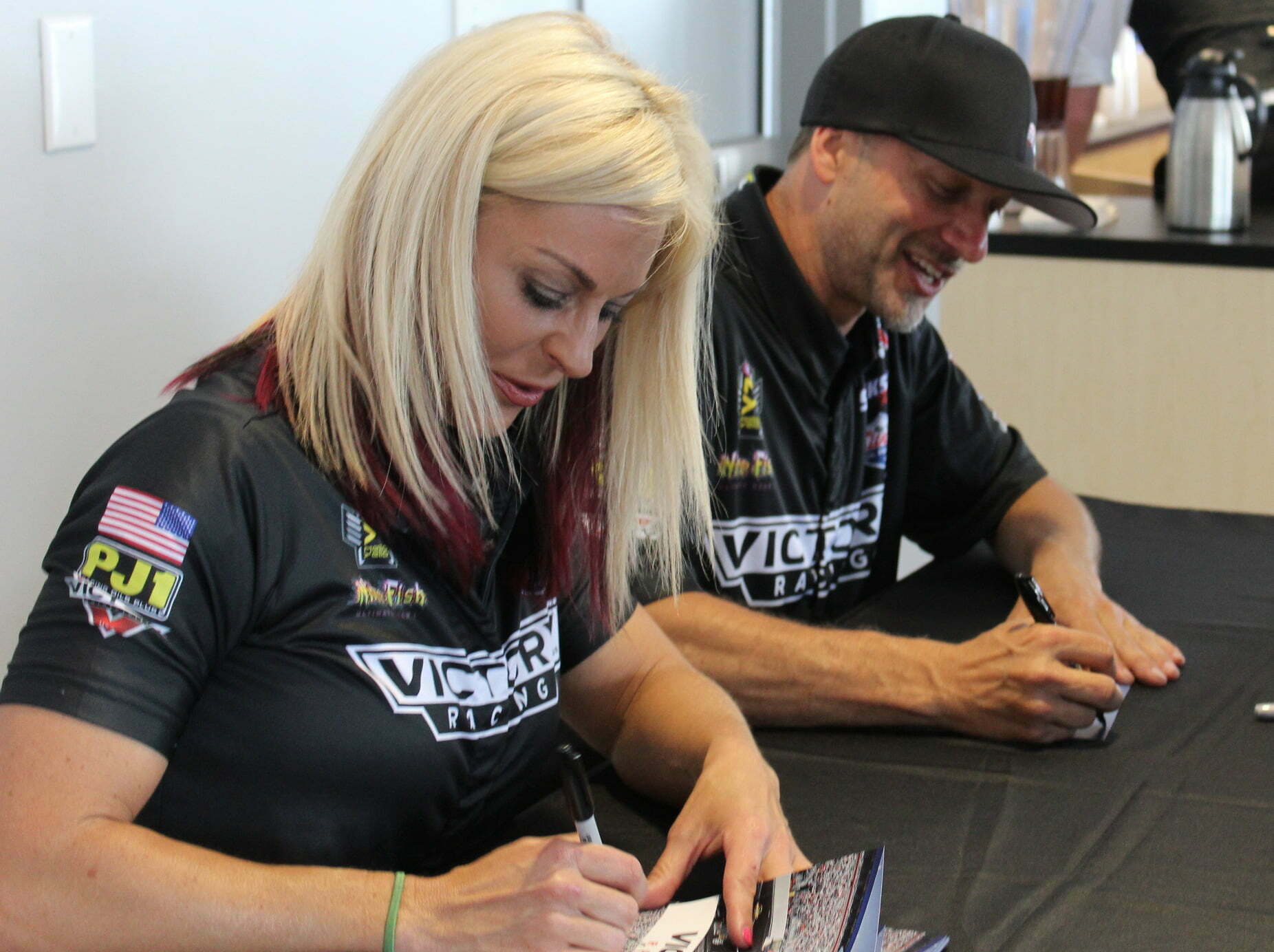 “We came into Sunday in the No. 2 spot and thought we had a good shot at winning this thing, and we did – it’s just unfortunate that something broke in the clutch,” Matt says. “I let the clutch go, and the bike didn’t move. It shows up in my reaction time, which was really late. We’ll get back home, put another clutch in it, and be ready to go to Atlanta and see if we can win there.”

Angie Smith’s run in the final qualifying session likely would have been quick enough to get in the field, but her time was not officially recorded. “It was just a freak deal,” she says. “I pre-staged, and when I staged the bike, I guess I staged it too shallow. The vibration from the bike backed it out of the beams, and I didn’t get a time. 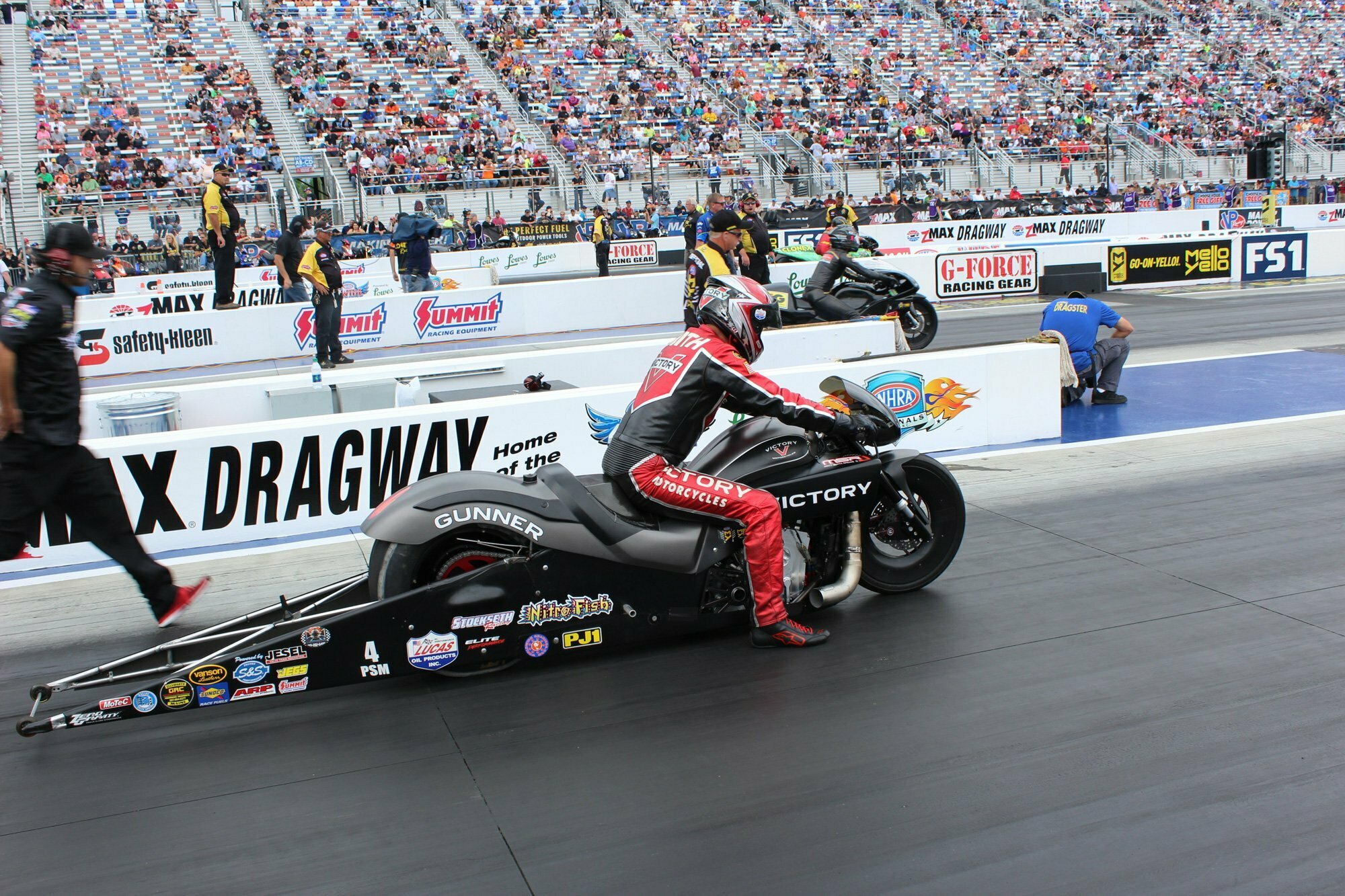 “We stage these bikes as shallow as possible to get the best e.t., so it’s like a double-edge sword. Fortunately or unfortunately, this is the first time in my racing career I’ve gotten burned. It happens.”

“While Angie had an unlucky mishap, Matt’s results this weekend show that Victory Racing’s Drag Race Team has the power to run at the top,” says Alex Hultgren, Marketing Director for Victory Motorcycles. “We’re only two rounds into the second season of the program, so we’re looking forward to what the coming races will bring.” 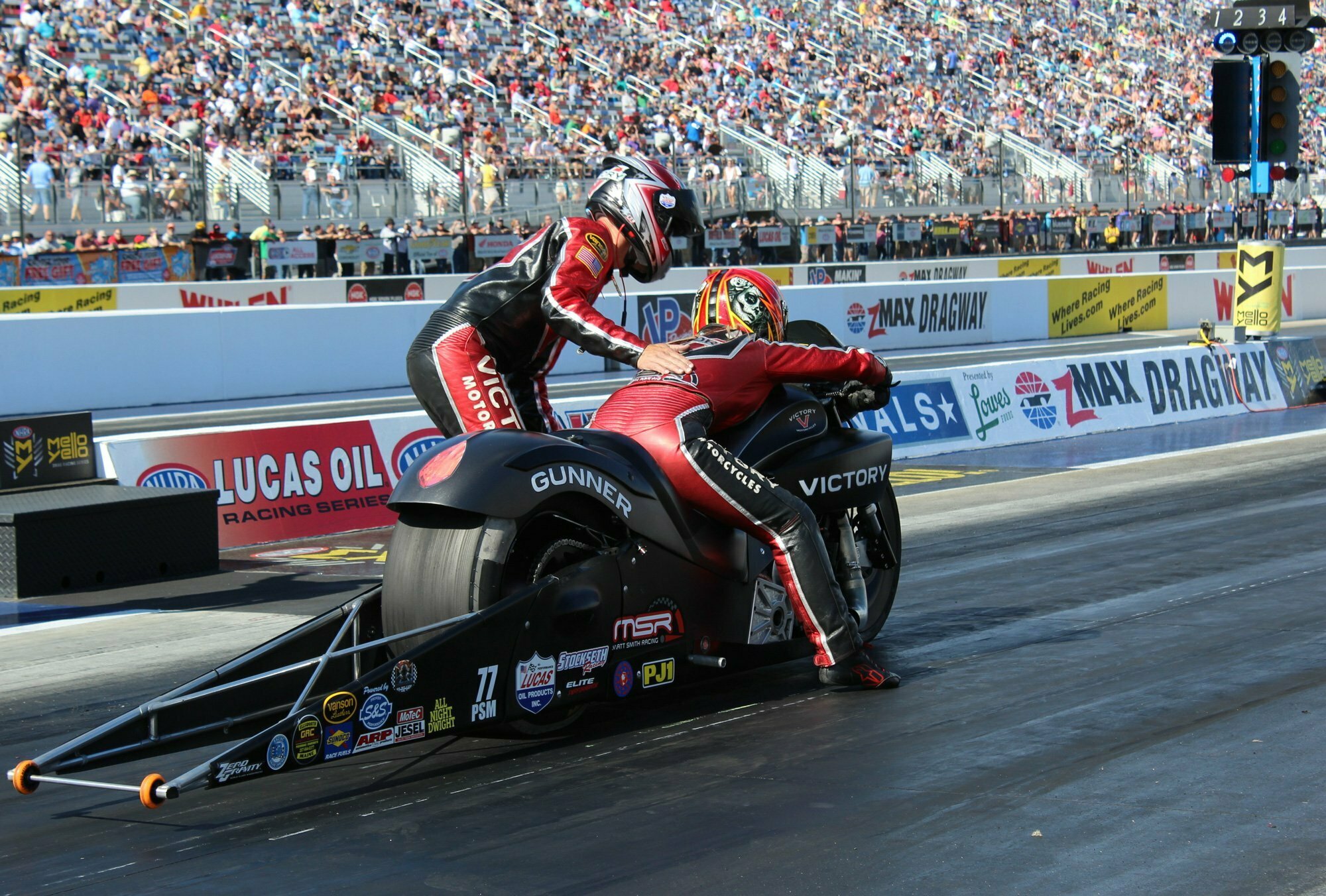 The next of the 16 stops in the drag race schedule brings riders to the Summit Racing Equipment NHRA Southern Nationals in Atlanta, Ga., on May 13. Race attendees can meet the fan-friendly Smiths and their Victory Gunner drag bikes in person, as NHRA racing allows visitors to get close to the action to experience the raw power of the Victory Racing Team in the heat of competition.