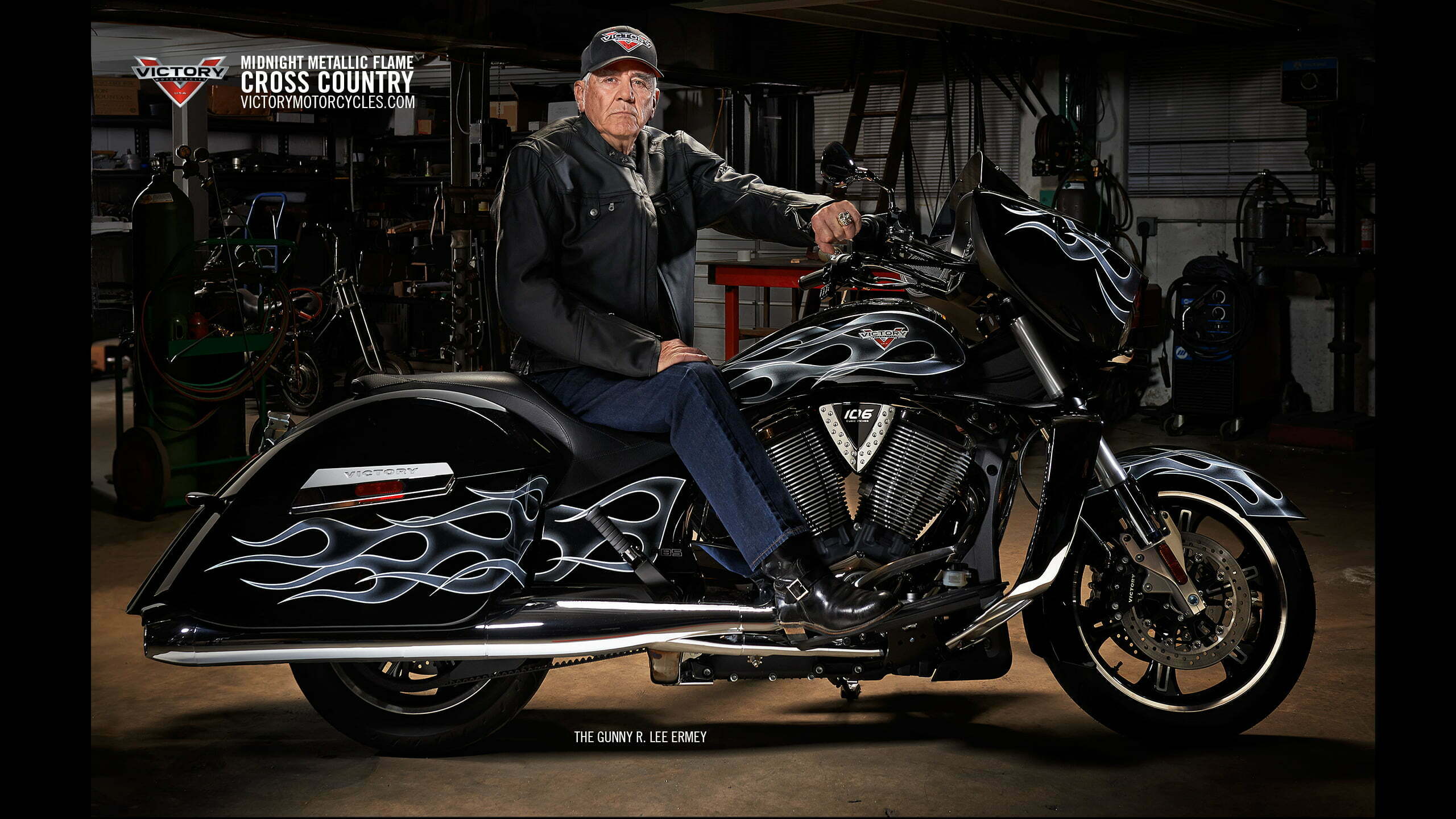 R Lee Ermey gets into game face for Sturgis.

“Everybody knows that the Black Hills motorcycle rally in Sturgis is the biggest party in the world,” says Victory Motorcycles General Manager Rod Krois. “This year we are proud to deliver all the performance and excitement that Victory motorcycles deliver to our customers every day, and we invite all riders to experience modern American muscle for themselves.”

Below are highlights of the action Victory Motorcycles, America’s most innovative and aggressive motorcycle manufacturer, has planned at the Sturgis Motorcycle Rally. Motorcycle enthusiasts are invited to join us, burn some gas and enjoy the party in Sturgis and the Black Hills.

Stop by Victory Motorcycles’ display on Lazelle Street beginning Saturday Aug. 6 to see the entire line of 2017 Victory motorcycles, make a run on dueling dynos, check out stunt shows, custom bike display and new Made For Victory accessories, slip in to a Slingshot, or pick up some apparel you forgot to pack.

Rally attendees will have a chance to ride the entire line of 2017 Victory Motorcycles, including the Victory Octane, High-Ball, Magnum X-1 and Cross Country Tour, as well as ride models outfitted with the new “Made For Victory By S&S” Stage 2 Kit.

Looking for apparel or Made For Victory accessories? Need parts or service? Planning a new motorcycle purchase? Roll over to Rice Victory Motorcycles in Rapid City to fulfill those needs, enjoy some BBQ and demo the latest Victory models. Visit with The Gunny on Wednesday afternoon, and pick up exclusive branded IAVA and Victory items. Rice Victory is also the exclusive location for your official Sturgis 76th Victory Owners Patch.

Join The Gunny and fellow veterans in a VetTogether. Driven by a growing member base, VetTogethers help build camaraderie between veterans and their supporters within a community by fostering a stronger peer network and keeping conversations going with monthly events. Attendees will receive an exclusive IAVA/Victory Swag Bag. Sign up for the VetTogether HERE.

Calling all Victory owners: You’re invited to the official 2016 Sturgis Victory Motorcycle Owner’s Event. It’s going to be a full throttle day starting at 2 p.m. at the Sturgis Dragway, where you’ll have the opportunity to rip down the 1/8-mile track to compete for the quickest time. When not white-knuckling it down the track, catch a world-class Victory Motorcycle stunt show with Tony Carbajal and Joe Dryden, meet the Victory Motorcycles NHRA Drag Team of Matt & Angie Smith, and talk with Zach Ness, Rick Fairless and Aaron Colton, among others. Once the dragway festivities conclude, owners will enjoy an escorted ride to the legendary Sturgis Buffalo Chip for a catered reception. All Victory Owners who pre-register are guaranteed a ticket to a performance by award-winning country singer Miranda Lambert at the Sturgis Buffalo Chip that evening. This is the owner’s event you don’t want to miss! Sign up HERE.

It’s grasshopper season in South Dakota, so stop by the Polaris Spearfish Paint Facility from 11 a.m. to 2 p.m. on Friday Aug. 12 to get your bike detailed to look like it just rolled off the production line. Victory owners must pre-register HERE for the Rub & Buff.

Take a gander through our latest Sturgis info or visit the official website for more info.