Motorcyclists with a mission 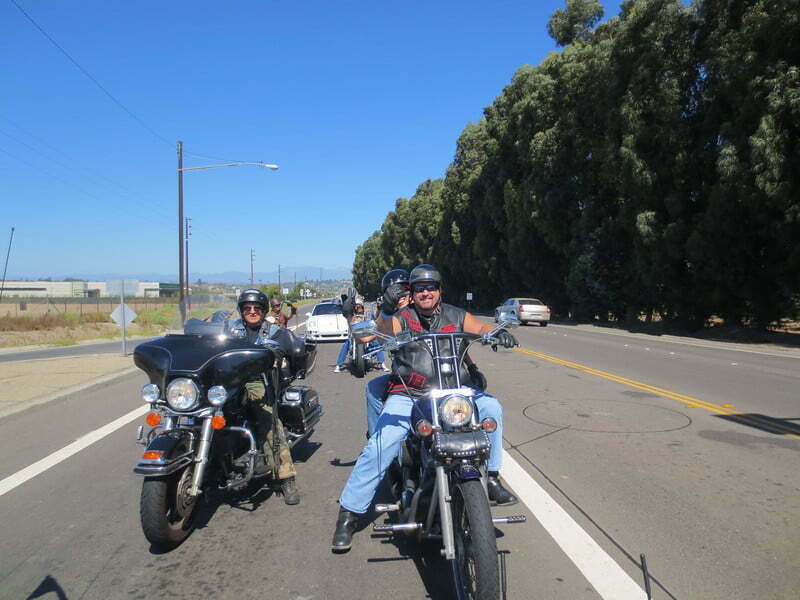 “It’s something I’d been wanting to do for years,” says Holtan, who spent three months at the Grossman Burn Center in 1990 after an automobile accident killed his best friend and left 40% of his body covered in third and fourth degree burns.

When burn survivor Trevor Holtan and US Marine Corps Captain David Kuntz each separately approached the Grossman Burn Foundation and Firefighters Quest for Burn Survivors in the summer of 2014 about starting a motorcycle benefit ride in Southern California, it was more than just a coincidence — it was meant to be.

Holtan, who rides a 2000 special construction Harley-Davidson ‘Franken-bike’, first brought the idea to a friend and Glendale Fire Station’s Battalion Chief, whose efforts with Firefighters Quest had been helping raise funds for burn survivors and their families for almost 20 years. A few years later, at a BBQ fundraiser at the West Hills Medical Center, Holtan formally presented the idea to the Grossman Burn Foundation and Firefighters Quest. 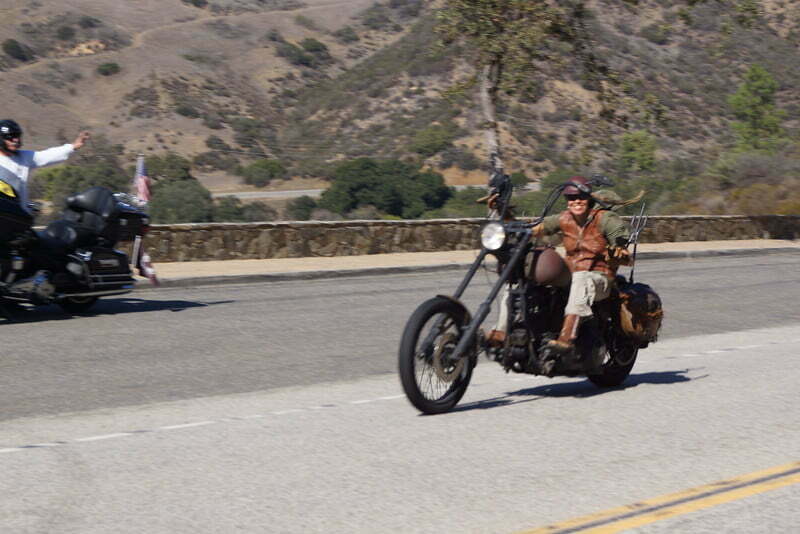 “I figured, what would’ve been the point of having gone through this hellish experience? To do nothing would have been a waste of the life I had been given a second chance at. I needed to find a purpose that would make it all worthwhile. I didn’t know how and I didn’t know what, but I loved riding motorcycles.”

“Coincidentally, and very fortunately,” recalls combat veteran and Motor City native David Kuntz, “Trevor had been speaking to people at the Foundation as well about doing a Burn Ride. So it all came together right at the same time.”

Kuntz, who left active service in 2012 and rides a 2011 Harley Davidson Rocker C, had been assigned as the motorcycle safety officer in his Reserve unit. Knowing that many reservists are also firefighters, and having heard through a friend that the Grossmans had gone overseas to help deployed troops that were burned in combat, Kuntz immediately wanted to get involved with the organizations’ efforts and proposed the idea to the Foundation’s chair. 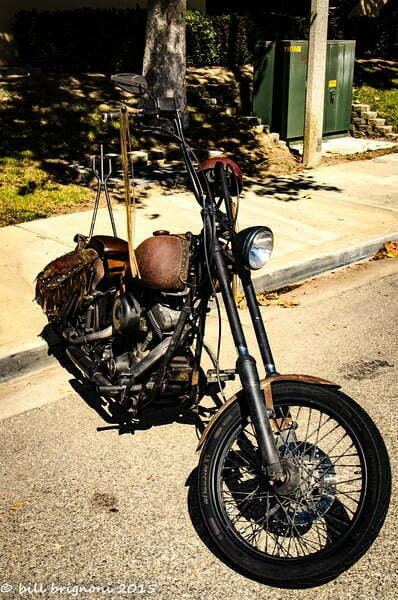 “That happened to be the first meeting of the SoCal Burn Ride and where I first heard that another gentleman – David – had brought the idea to them as well just shortly before that.”

“It’s one of those things,” Holtan reflects, “you never think that it could happen to you or someone you love and then, next thing you know, it does, and your whole life changes in that moment. And you’re left dealing with the aftermath of all the financial costs and treatment, the after care, physically, mentally, emotionally… Those were the darkest years of my life.

“Knowing how hard it is to go through all that – being in a hospital, having the scrub baths, the ‘feeling different than’ and the expenses, and everything that goes along with it, I realized that that’s something I could do to give back to the community. So the whole idea of the SoCal Burn Ride is to raise money to help the survivor and the family be able to transition back into their regular lives without having to worry about the additional costs associated with it.”

In just under three months, on Sunday, September 28th, 2014, a dedicated committee, including the two co-founders and members from the GBF and Quest, with a team of volunteers, officially held the first annual SoCal Burn Ride. Motorcycle riders, volunteers and supporters from all over Southern California came out to make the poker run from Calabasas to Ventura, while many local businesses and organizations contributed to the raffles and auctions and community leaders joined in for the ceremony afterwards. 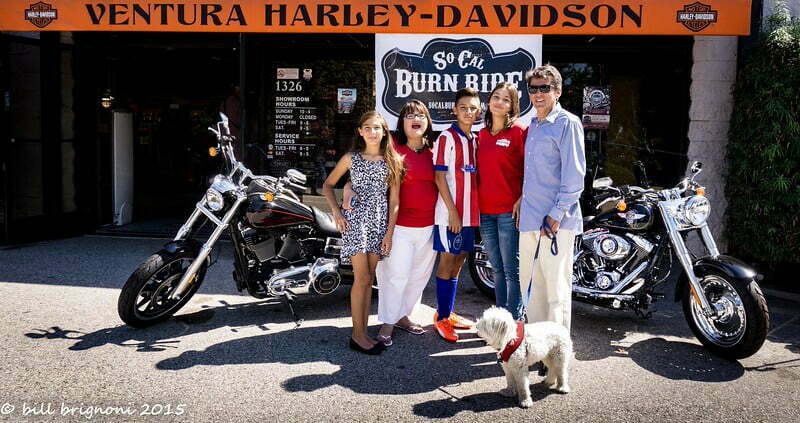 “The work they had been doing really hit home to me,” says Kuntz. “The most common thing that people think about when a loved one gets deployed is the worst case scenario – being killed. A lot fewer people think about something short of that, which is sustaining some sort of injury which is now going to mean a lifetime of recovery, possibly a lifetime of pain, a lifetime of constantly adjusting and trying to get comfortable with who you are now. And leading up to deployment, I spent some time thinking about the fact that that was a very real possibility for me.”

The following October, the second SoCal Burn Ride attracted even more support to the cause, helping to raise funds and awareness for burn survivors as well as bring the motorcycle community together again for a cause that has impacted the lives of many individuals like Trevor Holtan.

As he explains, “the whole goal is to bring awareness and to raise money for burn survivors, as a lot of their after-care treatment isn’t covered by insurance. It also provides support programs where you can meet other burn survivors and know that you’re not alone and be able to talk to somebody one-on-one and be able to say ‘hey, ya know what, I’ve been through that too.’ So I mean, it all sounds like fun, as far as the ride goes, but the root of it is to try and help people get through some of the toughest times in their lives.”

This year’s ride, scheduled for October 8th, begins at the West Hills Medical Center and will end at the iconic Sagebrush Cantina in Calabasas where Pink Floyd tribute band “Which One’s Pink?” will play and prize winners will be determined. As ridership is expected to increase substantially, service organization involvement, as well as vendor and sponsorship opportunities have also expanded considerably. All inquiries are met with enthusiasm by members of the SoCal Burn Ride committee, dedicated to furthering the mission of the event’s beneficiaries. 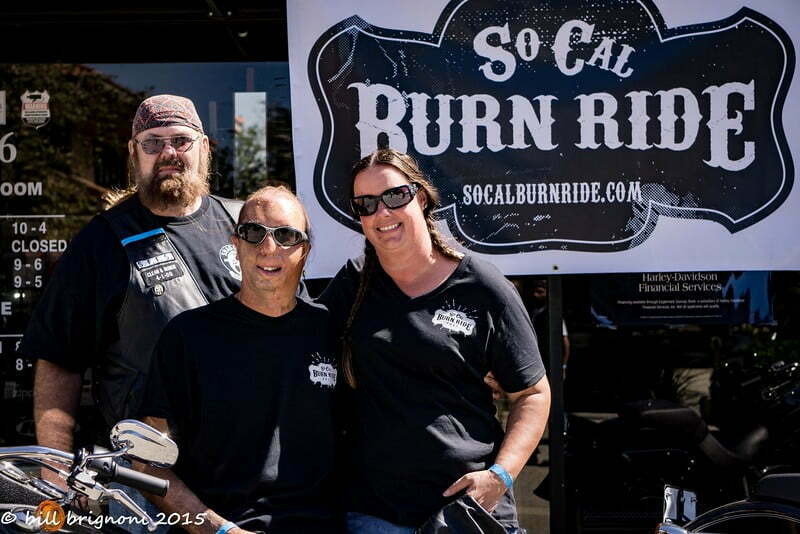 “We had realistic expectations given the timeline we had, but we were pretty blown away with what we were able to accomplish,” says Kuntz. “We were happy with it, happy enough that we said, ‘absolutely – we’re gonna keep this going’.”

“There are countless stories from survivors telling about how the Grossman Burn Foundation and Firefighters Quest for Burn Survivors have helped them turn what would have been their greatest tragedies into their greatest triumphs,” says Kuntz. “Both of the foundations have allowed me to be a part of something that’s incredibly powerful and deeply impacts peoples’ lives for the better. Aside from that, I’ve gotten to meet a number of burn survivors like Trevor and they’re some of the strongest people you could ever imagine. They give me a great, great deal of inspiration and I draw a lot from that – it’s something I wasn’t expecting when I first got involved with this, and as I got more involved with the ride and the foundations, it’s something that has really impacted me on a personal level quite a bit. It’s been a life changing experience for me and I’m really thankful for it.”

“Where I’d like to see it go from here,” adds Holtan, “is I really wanna see it grow. We’re called SoCal Burn Ride for a reason: not because we ride Calabasas and Ventura, I wanna hit all of SoCal. And the only way we’re gonna be able to do that is with your help. We need other people to spread the word, we need people to wanna get behind us and help financially back us so that we can get out there and get big and put on an event that everybody’s gonna wanna come to.”

To join Holtan and Kuntz on the ride to benefit burn survivors or learn how you can help the SoCal Burn Ride, go to www.socalburnride.com or email [email protected] All are welcome and support is greatly appreciated.

Check out our latest custom bikes.