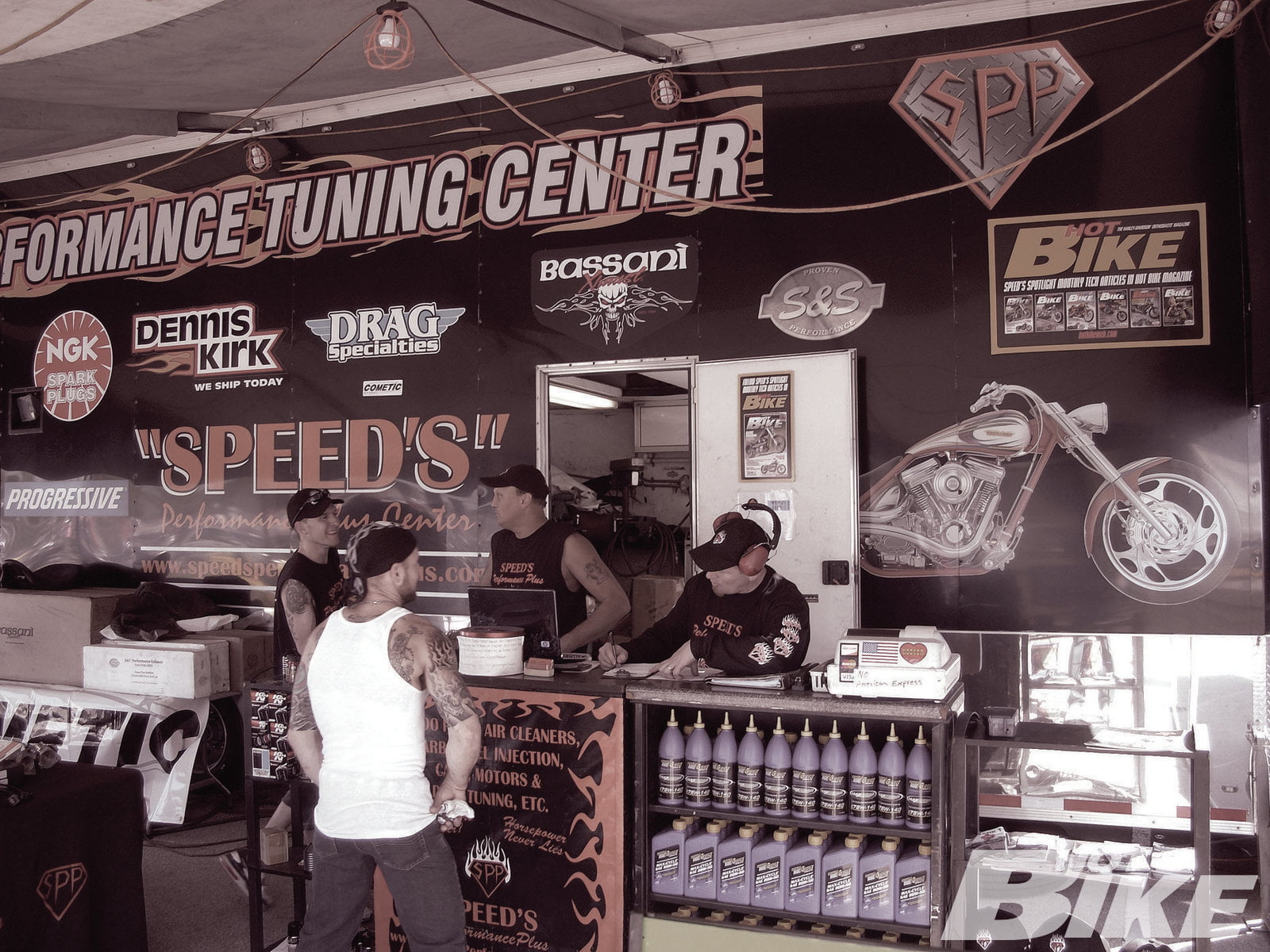 Everyone knows the benefits of a dyno tune when the goal is maximum horsepower. But times have changed. These days fuel mileage has become a huge issue. Filling up a Harley with a tank full of 93 octane is a $25 or $30 hit, something that hasn’t escaped anyone’s notice or wallet. “More and more riders are coming up to us at the events asking to increase their fuel mileage,” Jason Hanson, one of the tuning gurus at Speed’s Performance Plus says. “When a gallon of gas was under a buck that wasn’t a concern. A fill up was $5. That’s no longer the case.” So tuning for performance with fuel efficiency has become very much a part of the SPP package. And that dyno, so useful to dial-in power, has become more important than ever.

Now, before rolling that bike up onto the dyno for an efficiency-tune, there are a number of things any rider can do to help the fuel-mileage situation. First of all it’s important to keep track of your fuel mileage to know exactly where you stand. Optimally you should be getting somewhere between 40 and 50 mpg, regardless of the motorcycle’s displacement or modification. “My own big-inch bike, a seriously hopped-up 114, gets 42 mpg,” Jason says. Besides knowing your MPG baseline there are a few other things to check out pre-dyno tune. Number one here is maintaining a squeaky-clean air filter. “That’s huge,” Jason adds. “And a fresh set of Iridium-tipped spark plugs is important, too.” So are properly inflated tires, the alignment of the wheels, the elimination of dragging brakes or anything else that could impede easy rolling down the road. Get all that squared away and you’re well on the way to maximum MPG, which can be dialed-in on that dyno.

Carbureted bikes? Dyno tuning is just about mandatory to squeeze out fuel mileage here. Trying to optimize a carburetor’s efficiency without the help of a dynamometer and its air/fuel analyzing equipment is just a trial-and-error crapshoot. Without actually seeing what those changes in jet size, needle height, and idle-mixture screw adjustments are producing, and where the changes are happening, it’s all a guessing game. You’re hoping for the best as you make the changes. Put that bike up on the dyno though, and you’ll see exactly what’s happening with that air/fuel mixture and how it can be manipulated in the cruising ranges where it’ll make the most difference and do the most good for MPG.

“When a gallon of gas was under a buck that wasn’t a concern. A fill up was $5. That’s no longer the case.”

Tuning for fuel mileage with an EFI bike, as you’d suspect, is lots more precise. “I have way, way more adjustability here,” Jason says. Using that Power Commander, adjustments in the air/fuel ratio are made at 250 rpm increments at every throttle position, idle to wide open. “It’s almost like custom tuning at every MPH in every gear,” Jason explains. “After I’ve built a performance map specifically for that motorcycle, I can go back into the cruising ranges, 2,000 to 3,500 rpm at throttle positions from just off idle to roughly 40 percent, then lean the mixture back to optimize the fuel use in the areas where most riders spend most of their riding time.” At those engine speeds and throttle positions the bike will be out on the highway with good airflow hitting the engine, too, helping to cool it down and offset any extra heat stemming from a slightly leaner mixture. Significantly, you’ll note the air/fuel mixtures in the power ranges have been left completely alone, still set for maximum performance when that throttle gets cracked open hard and fast.

This EFI economy picture gets even better if AutoTune is added in on top of that Power Commander. “It’ll take fuel mileage tuning another step,” Jason goes on. “By going into that same cruising range, 2,000 to 3,500 rpm, but now doing it in the AutoTune program, I can tell the AutoTune to set the air/fuel ratio for maximum mileage and it’ll be an even finer tune because with AutoTune it will constantly be re-tuning itself to that optimum-mileage AFR we want.”

Dyno tuning for fuel efficiency isn’t free, but it’s cost effective. If you can pick up two, three, four, or maybe even five MPG and you do any amount of riding, the savings at the pump will more than offset the price of setting things right here. Stop by and talk fuel economy with performance with Jason, Jamie, or any of the Speed’s Performance team next time they’re at a nearby event. The schedule’s all on their website. And these days, rest assured, you won’t be the only one asking for more Smiles Per Mile.