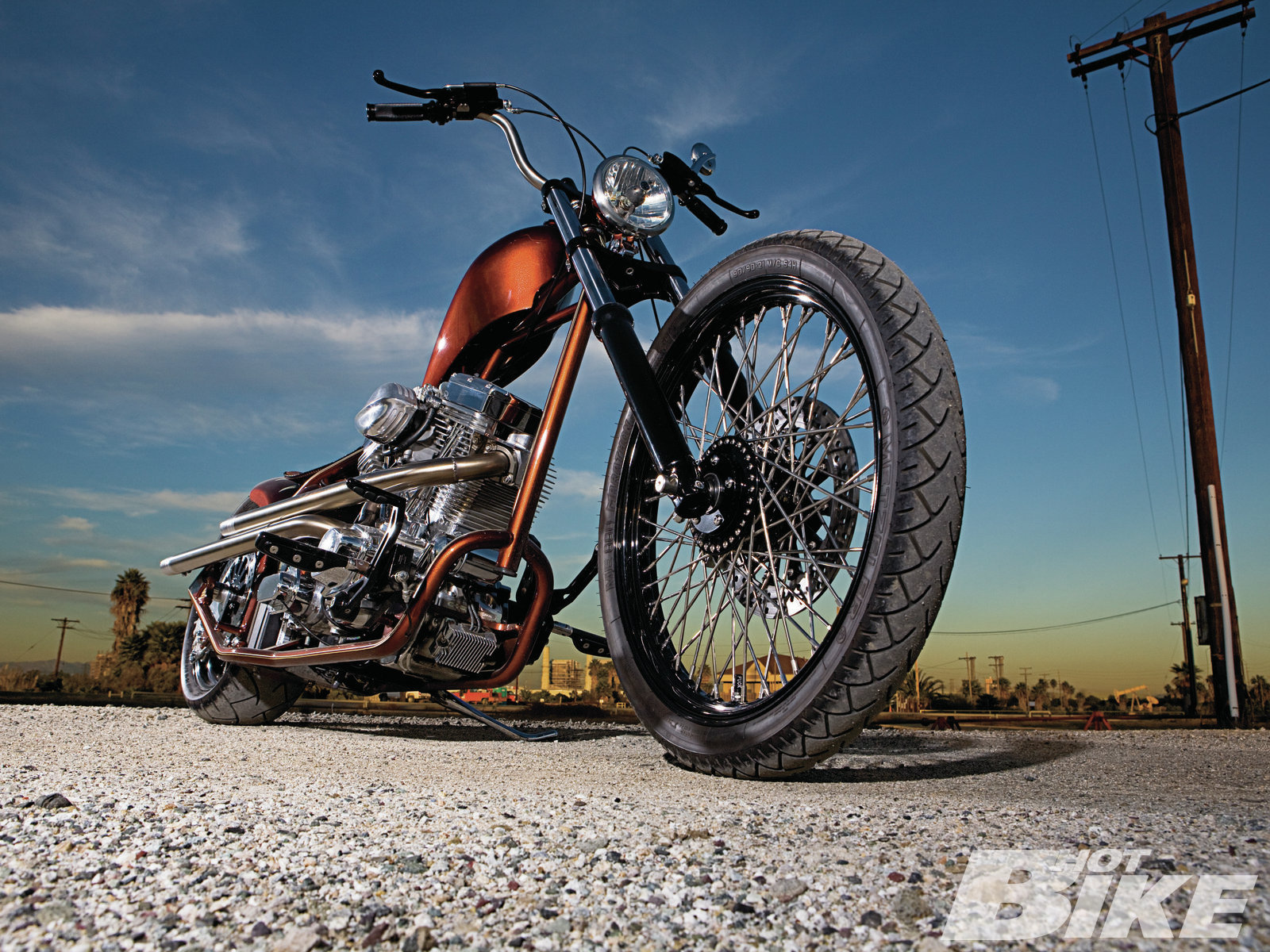 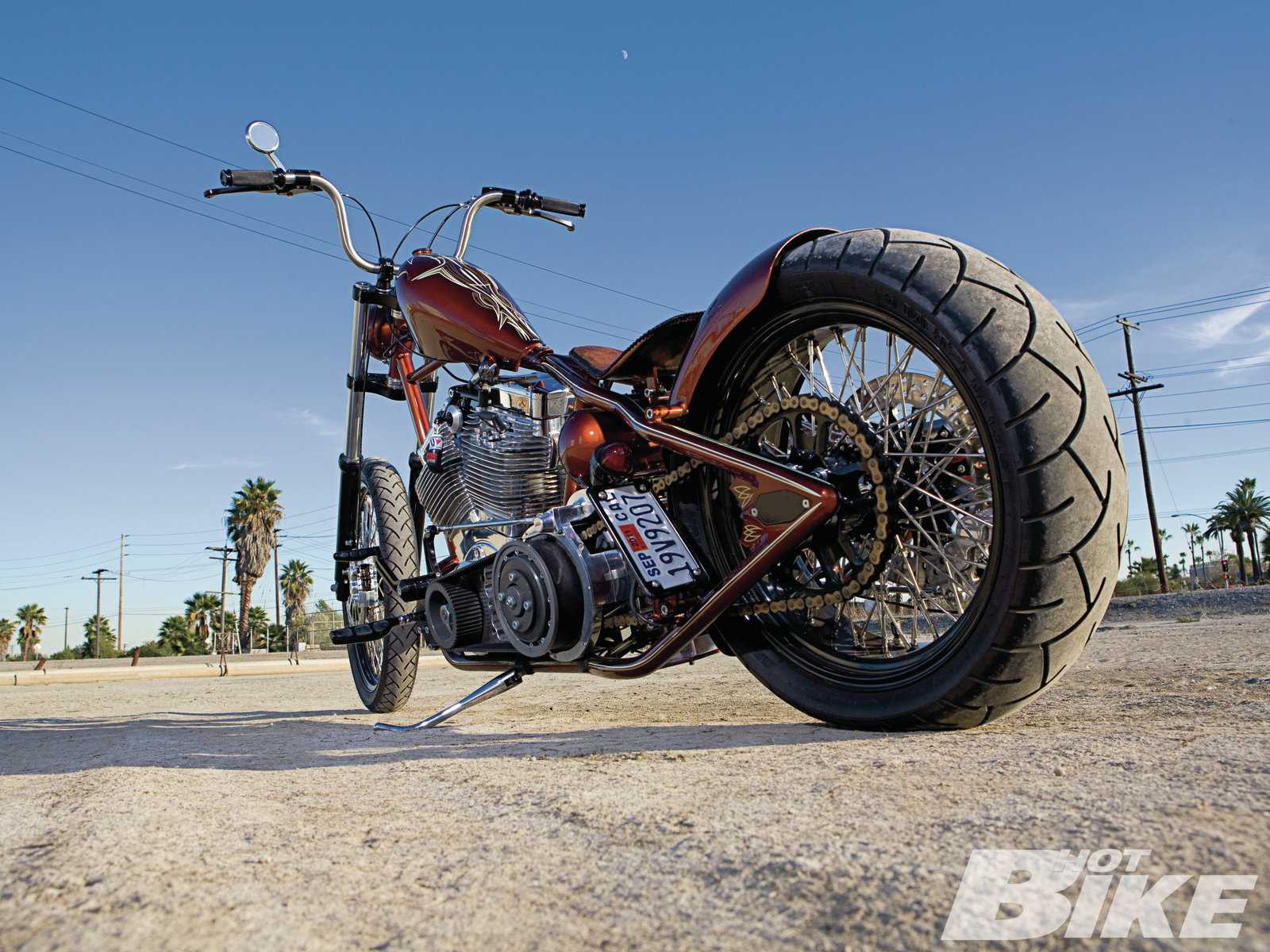 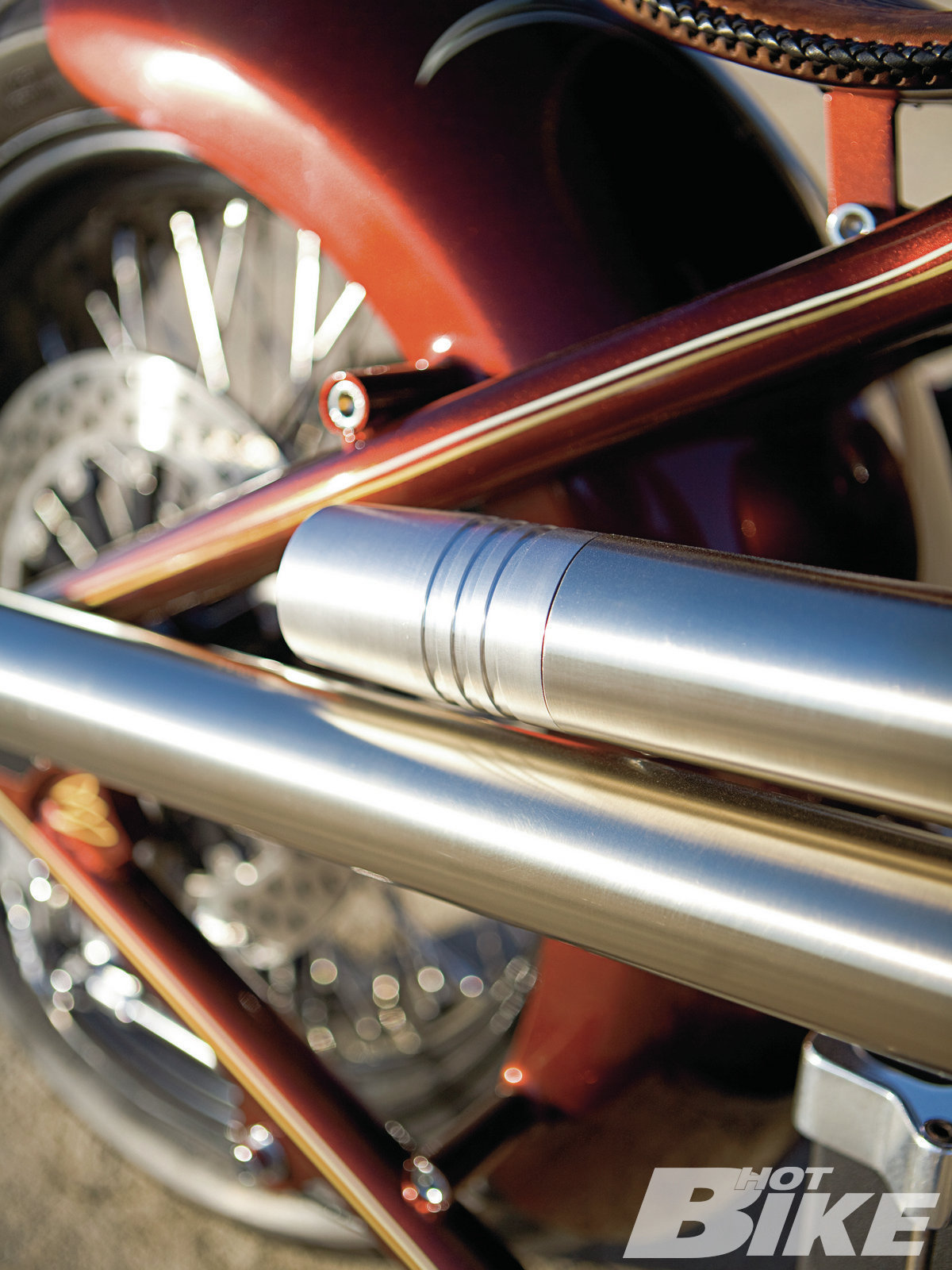 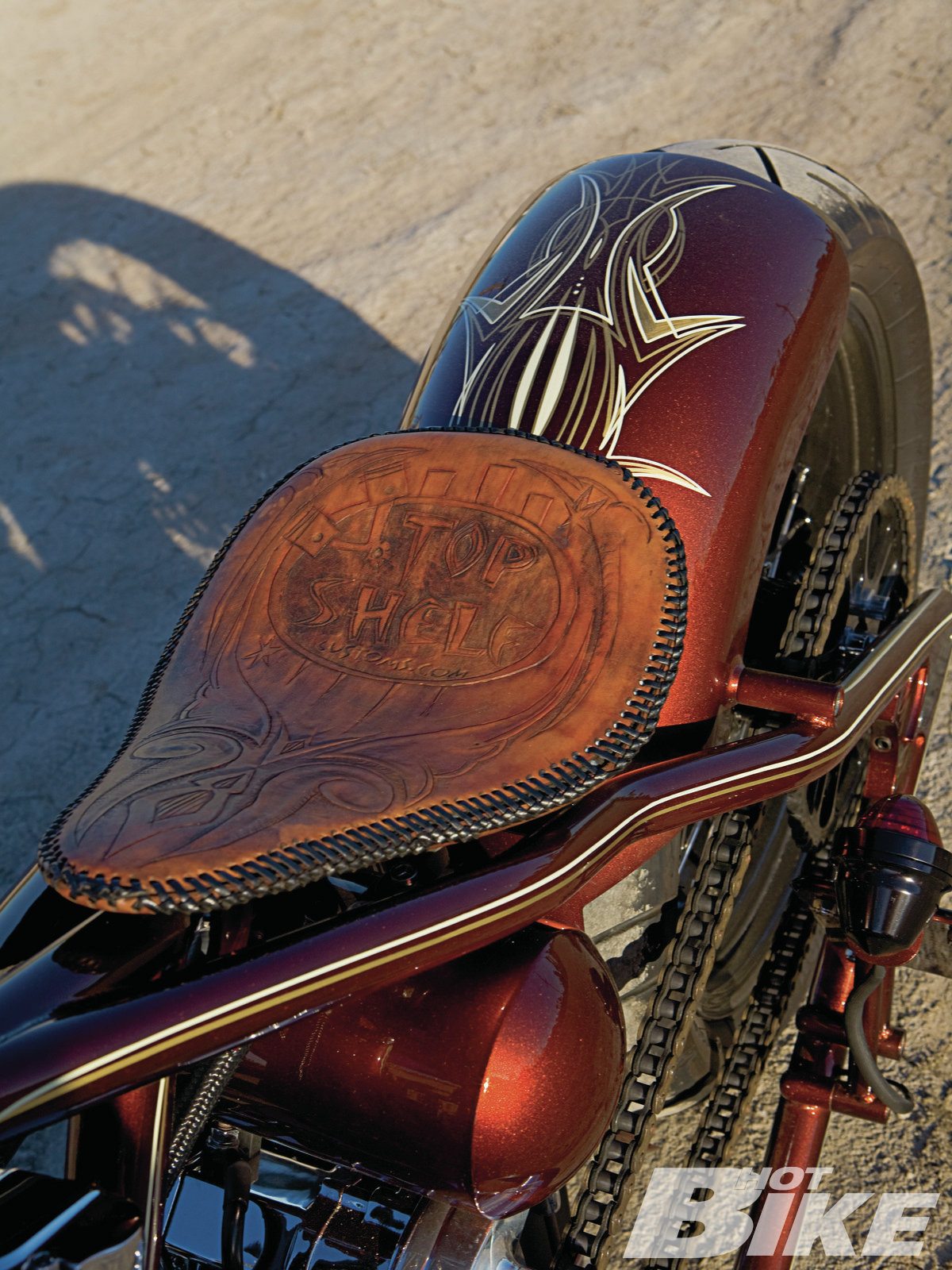 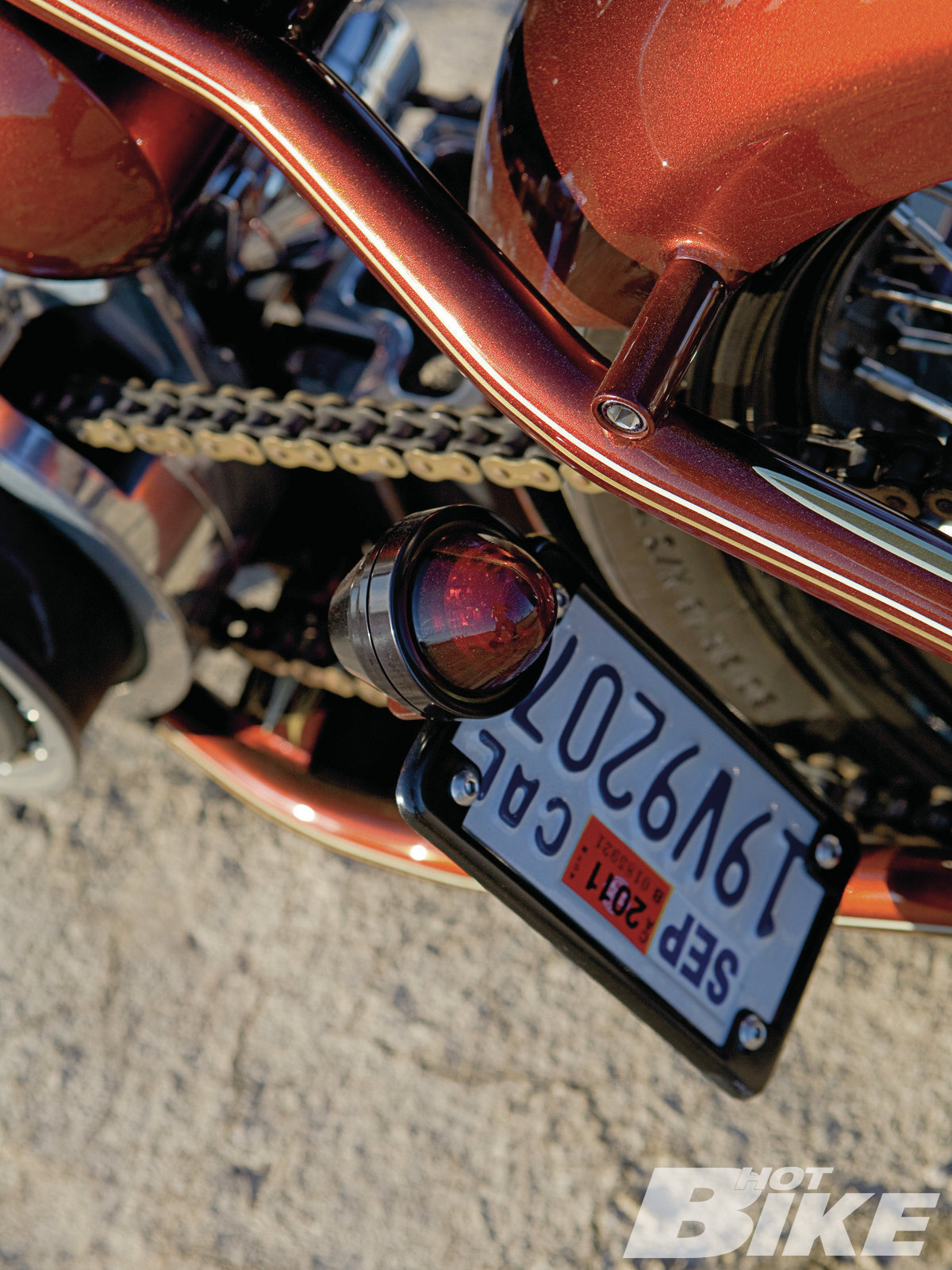 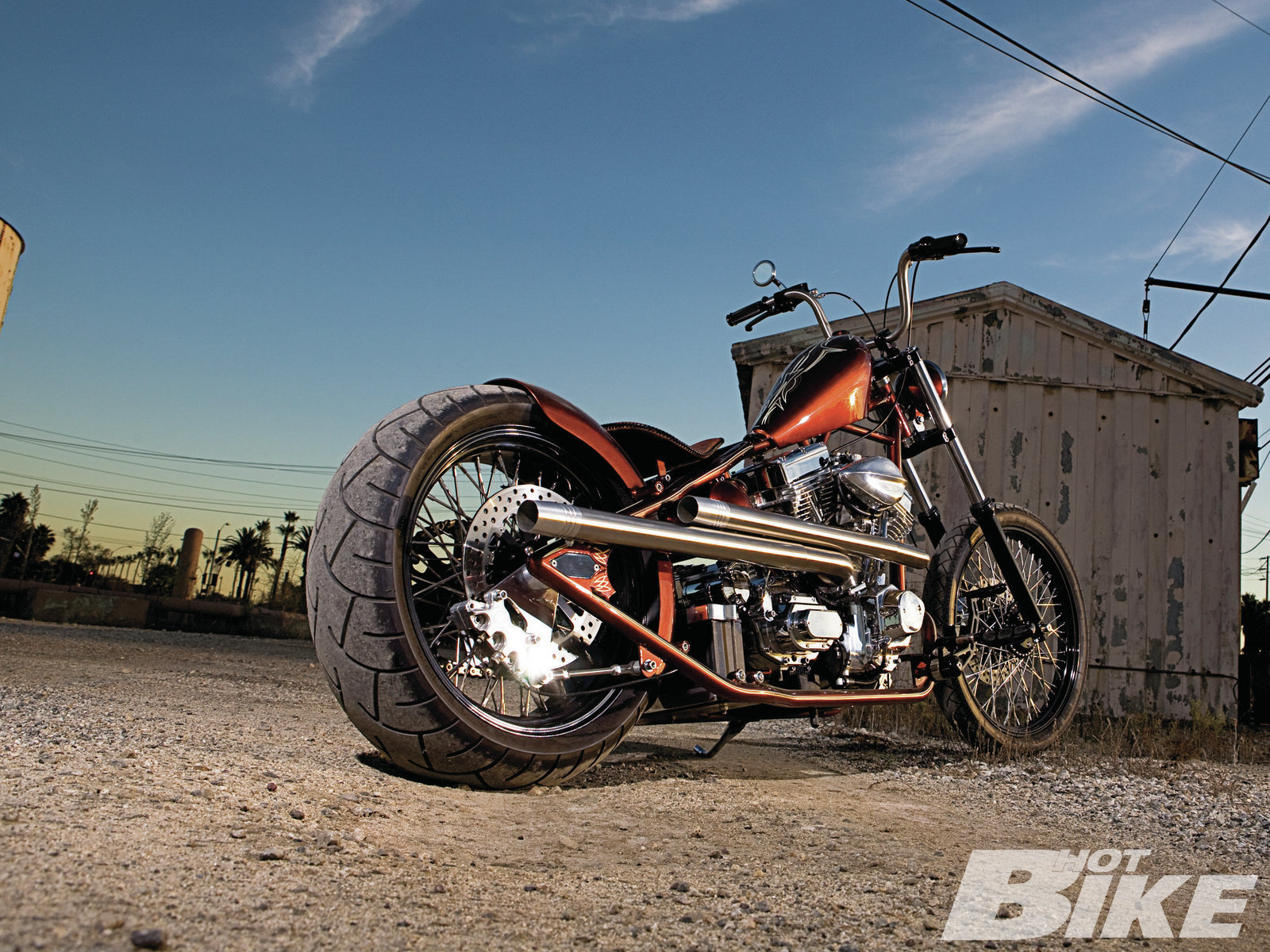 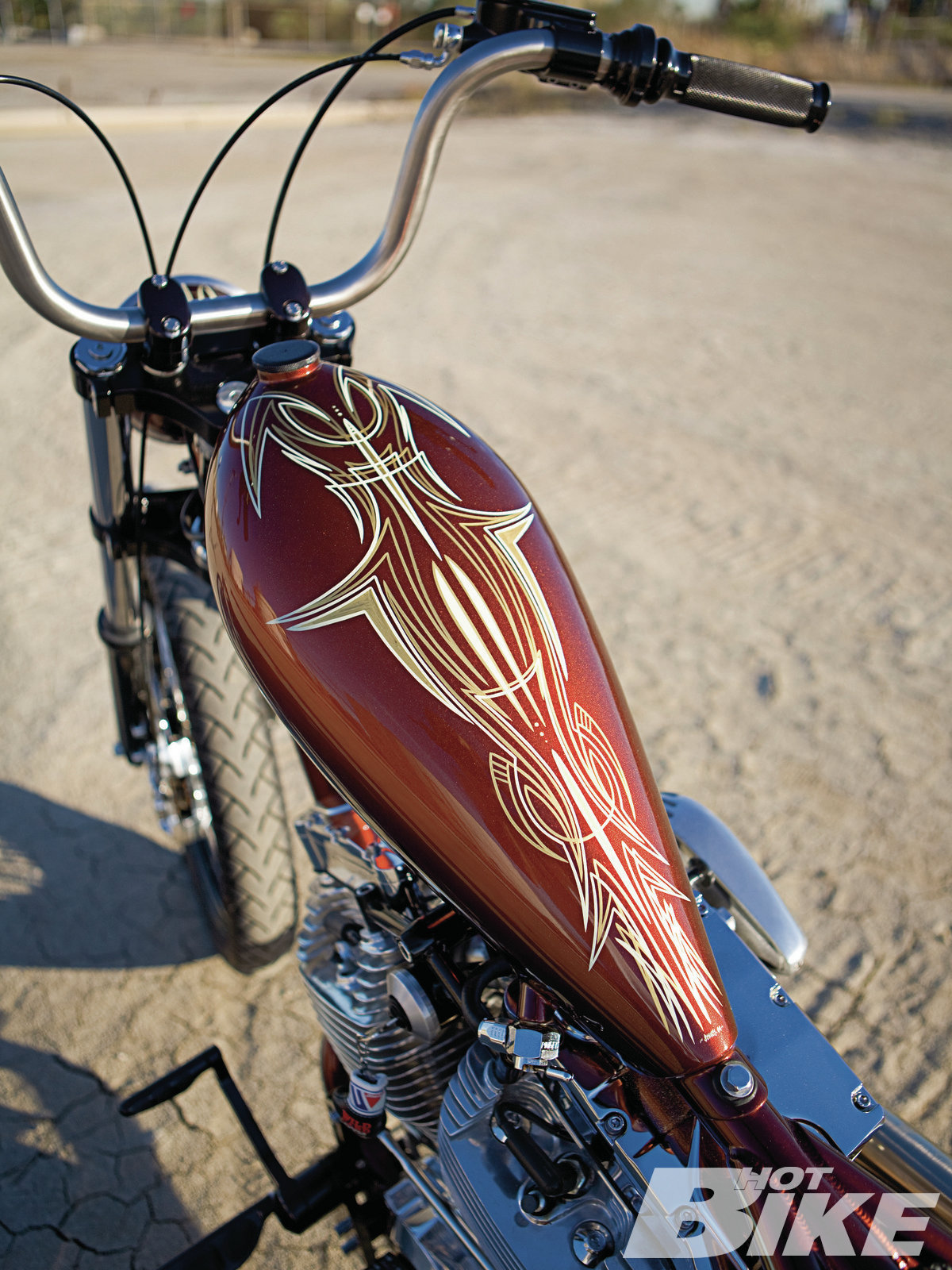 “It was time for Al to get his raked-out taste of the highlife, so he put pen to paper and with the guidance of Barry they both built this stellar cycle.”

On the outskirts of Huntington Beach, California, on Bolsa Chica Road lies a place known as Top Shelf Customs. Since 2003 Barry Lacour and his right-hand man, Al Raposo, have been building some solid retro-styled choppers for legions of SoCal riders, but not this bike. It was time for Al to get his raked-out taste of the highlife, so he put pen to paper and with the guidance of Barry they both built this stellar cycle.

Starting the build was a custom-built single-downtube frame by Anthony at Chassis Design that was raked 35 degrees. The frame was also designed to have the backbone stretched 2 inches out and 1 inch up. A set of Chassis Design narrow trees hold the 39mm Showa forks in place and add that old-school look.

When it came time to power the bike, a fully polished Ultima 120ci motor was used with a Mikuni 42mm carb topped off with a Goodson air cleaner. To spit out the gasses, Top Shelf fabbed a set of stainless exhaust pipes with aluminum tips. The powerplant shifts via a Harley-Davidson five-speed transmission kept in check with a beautifully polished BDL 2-inch beltdrive.

Such a big-inch motor needed a meaty tire out back to keep the power on the ground, but nothing too extreme. Al went with a Metzeler 200 tire wrapped around an 18-inch 60-spoke wheel from DNA. Up front, a 21-inch 60-spoke DNA wheel was also shod in Metzeler rubber.

Al is a rather big fella, so a set of forward controls was a must. Since Top Shelf is an authorized Performance Machine dealer, a set of PM’s classic foot controls in black were used. Up top Al also used a set of PM Contour controls, which were bolted to a set of Top Shelf’s SST Short bars, Shorty risers, and Smasher grips.

The seating surface started out as a hand-pounded solo pan by James Geirman and was then covered with hand-tooled leather by Swap Meet Carl.

The sheetmetal is the perfect combination of old and new. The Sean Gibbsmade tank along with a West Coast Choppers rear fender and struts set the look of the bike off really well. Once the tank and fender were mocked up and proved to be a winning pair, Taylor Schultz of Schultz Design sprayed them, along with the oil tank and frame in Floating Turd Brown mini-flake. Taylor then broke out the 00 Mack brush and topped them off with hot-rodstyle pinstripes.

Getting personal bikes built between customer’s bikes isn’t ever easy, but Barry and Al made it happen with plenty of late nights and early mornings. In three month’s time it was Al’s turn to throw a leg over one of Top Shelf’s nicest creations. It must have been a special day for Mr. Raposo because this time he got to bring it home and pay the over-inflated California registration on it. HB