It’s not really a race, but Thunderbike has nevertheless grabbed the holeshot on customizing Harley-Davidson’s newest Softail, the FXDR 114. Harley unveiled the FXDR three months ago and it seems that Thunderbike was paying close attention because the German dealership was one of the first to market with aftermarket goodies for the hot-rod cruiser.

As we know, the 2019 Harley-Davidson FXDR 114 rolls with a Milwaukee-Eight 114, an inverted fork, and dual front discs, providing a solid nucleus. Thunderbike’s changes are subtle but smart, targeting the most likely areas FXDR owners are going to want to change up first. 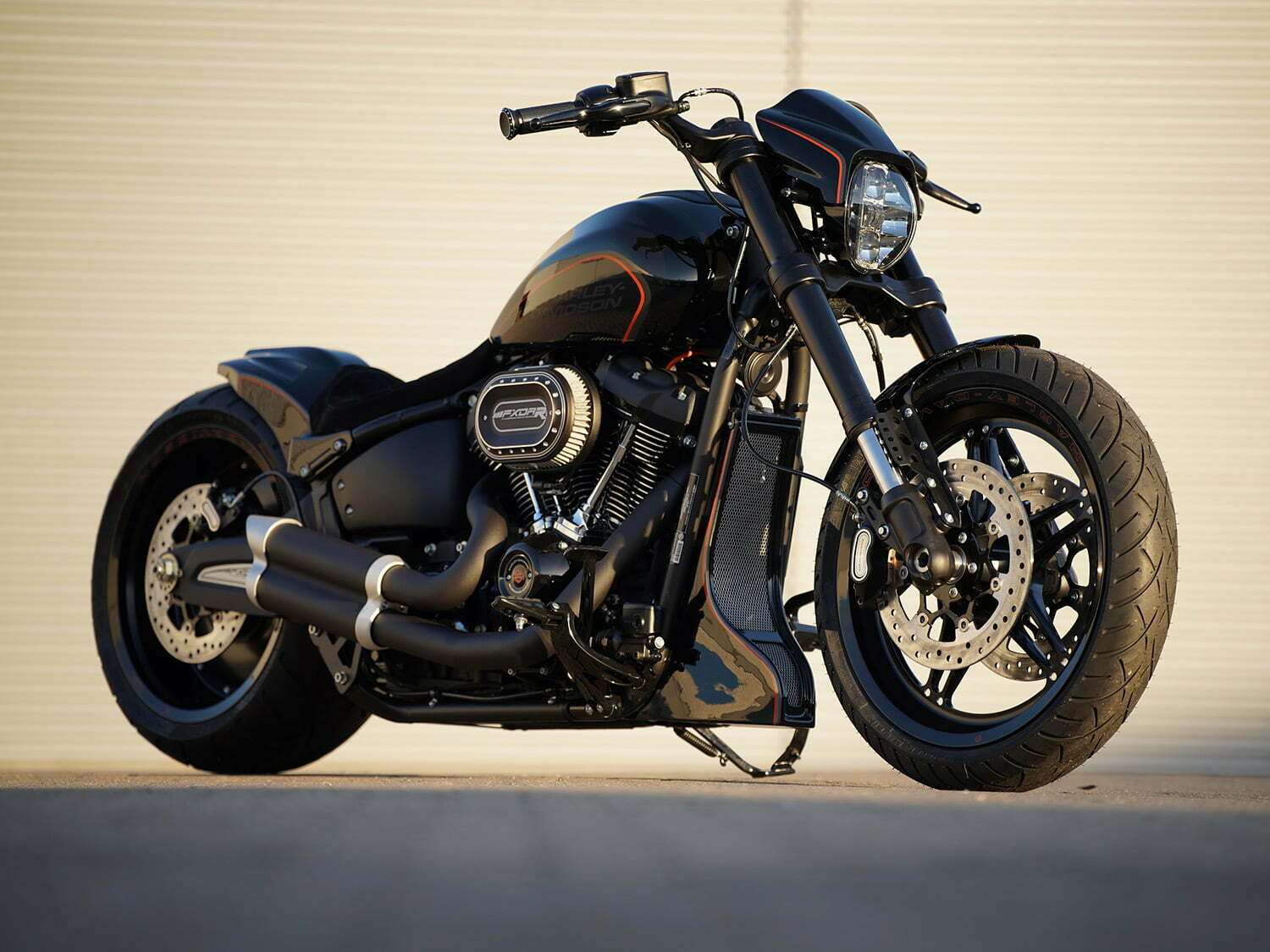 The 2019 Harley-Davidson FXDR 114 rolls with a Milwaukee-Eight 114, inverted fork, and dual front discs, which is a great place to start but there’s always room for improvement.

That includes tidying up the back end. While the stock tailsection is sporty, the license plate mount flanking the back tire and the debris deflector over it look like an afterthought. Thunderbike cleaned it all up by chopping the tail and dropping it to hug the bigger 260mm tire. This also moved the seat down and back, making room for a new diamond-stitched seat. Tiny LED brake light and turn signals are frenched into the tail, which also offers a much cleaner look than the stock trio of lights above the license plate. Thunderbike also made a side-mount license plate bracket to relocate the metal to the left side of the bike, leaving the FXDR’s ample backside prominently displayed. If you’ve got it, flaunt it! 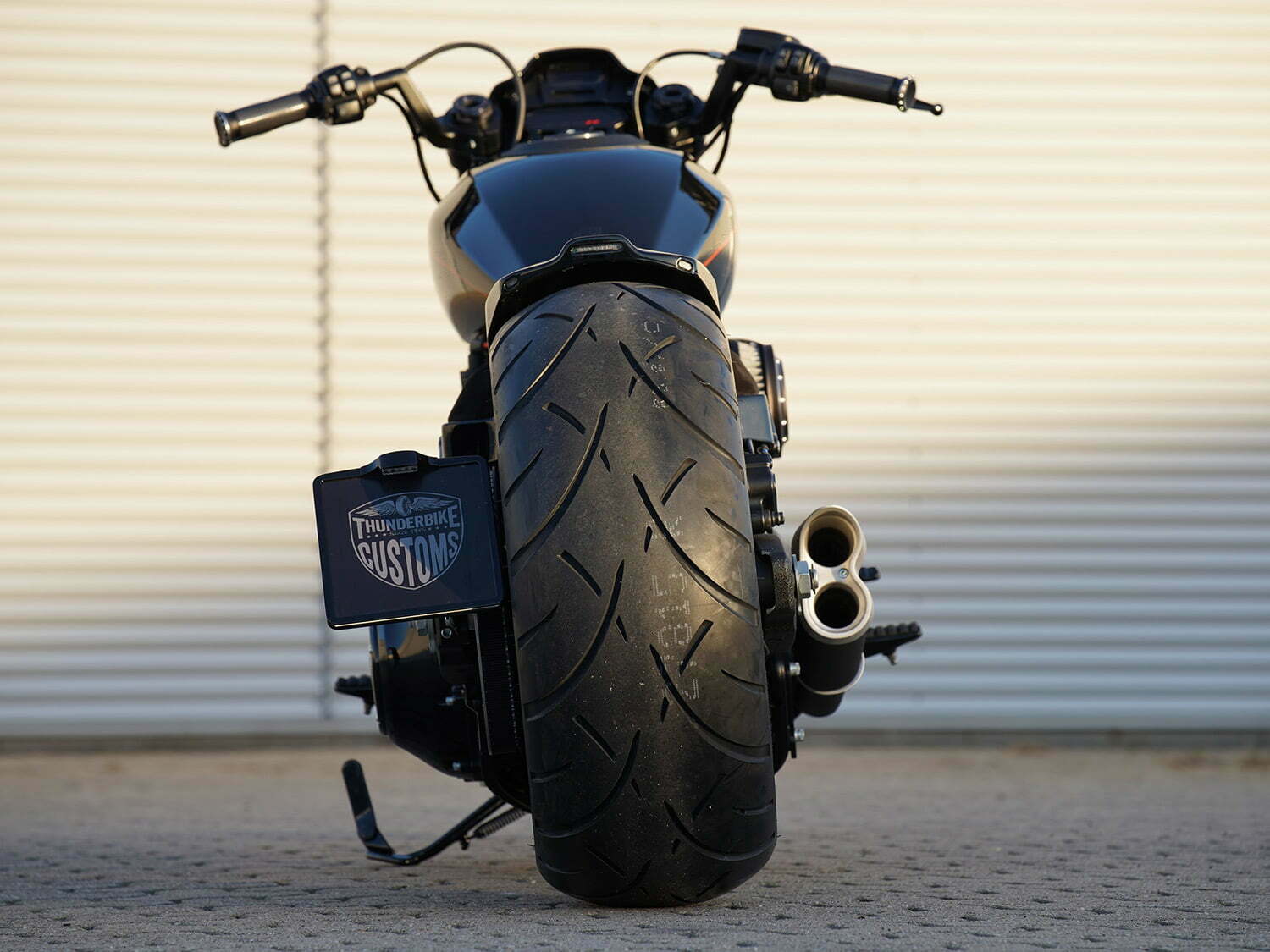 Tiny LED brake light and turn signals are frenched into the tail for cleaner look. Thunderbike’s side-mount license bracket exposes the FXDR’s beefy backside for all to appreciate.

The rear of Thunderbike’s FXDR (which they call “Destruction”) saw more than aesthetic changes. The stock rear monoshock was also swapped out for one of the company’s air ride systems.

“It’s a new air ride, because we needed more lowering for a flat, drag bike look. The front is also 50mm lower. Parts are in production,” said Martin Mix, head of eCommerce for Thunderbike. In order to squeeze in that air ride system, the dealership had to relocate the ignition coil, but looking at it from curbside, you’d never realize all that work had been done beneath the seat. 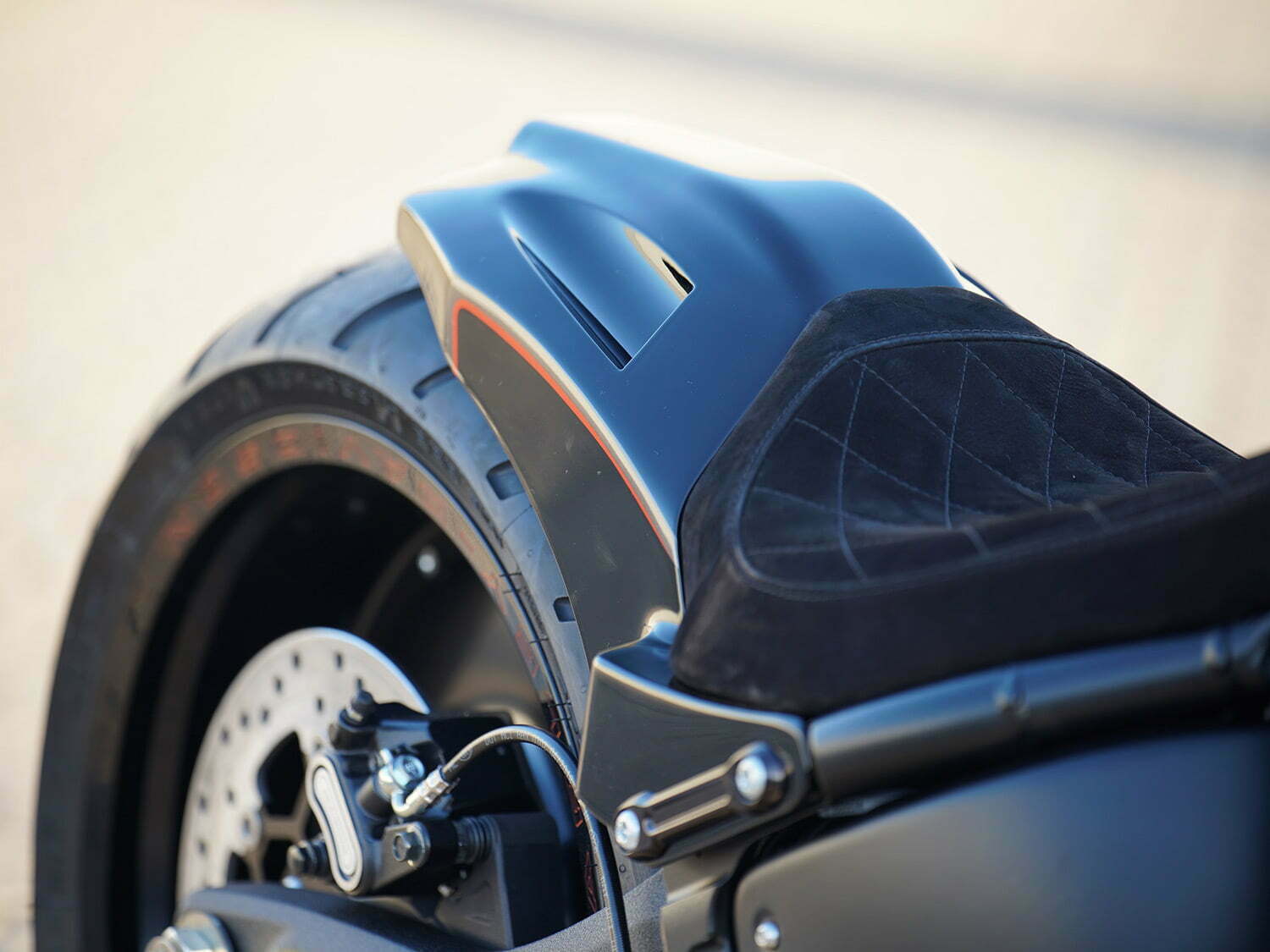 Thunderbike cleaned up the back end by swapping in their shorter GP-style fender over the bigger 260mm tire. The new diamond-stitch seat also ends up sitting lower.

On the front end, Thunderbike worked up a new fender and chin spoiler for the FXDR, with the spoiler more pronounced than before. On the other hand, a little farther up the fork, the Motogadget m.blaze Pin turn signals are much smaller than the stockers. The only other mod to the front is the addition of Thunderbird Satin Grips to the bars, punctuated by bar ends with the same design as the air cleaner cover.

While the stock Harley Destroyer-inspired airbox undoubtedly shovels extraordinary amounts of air into the big Milwaukee-Eight, it’s a huge honking system for a streetbike. Thunderbike’s new Oval Airbox opens up the look of the left side and feels more natural for Harley’s latest V-twin. Thunderbike’s Grand Prix staggered exhausts are routed more directly and are a bit more compact than Harley’s 2-into-1 arrangement, another move that cleaned up the bike’s pipe-side appearance. 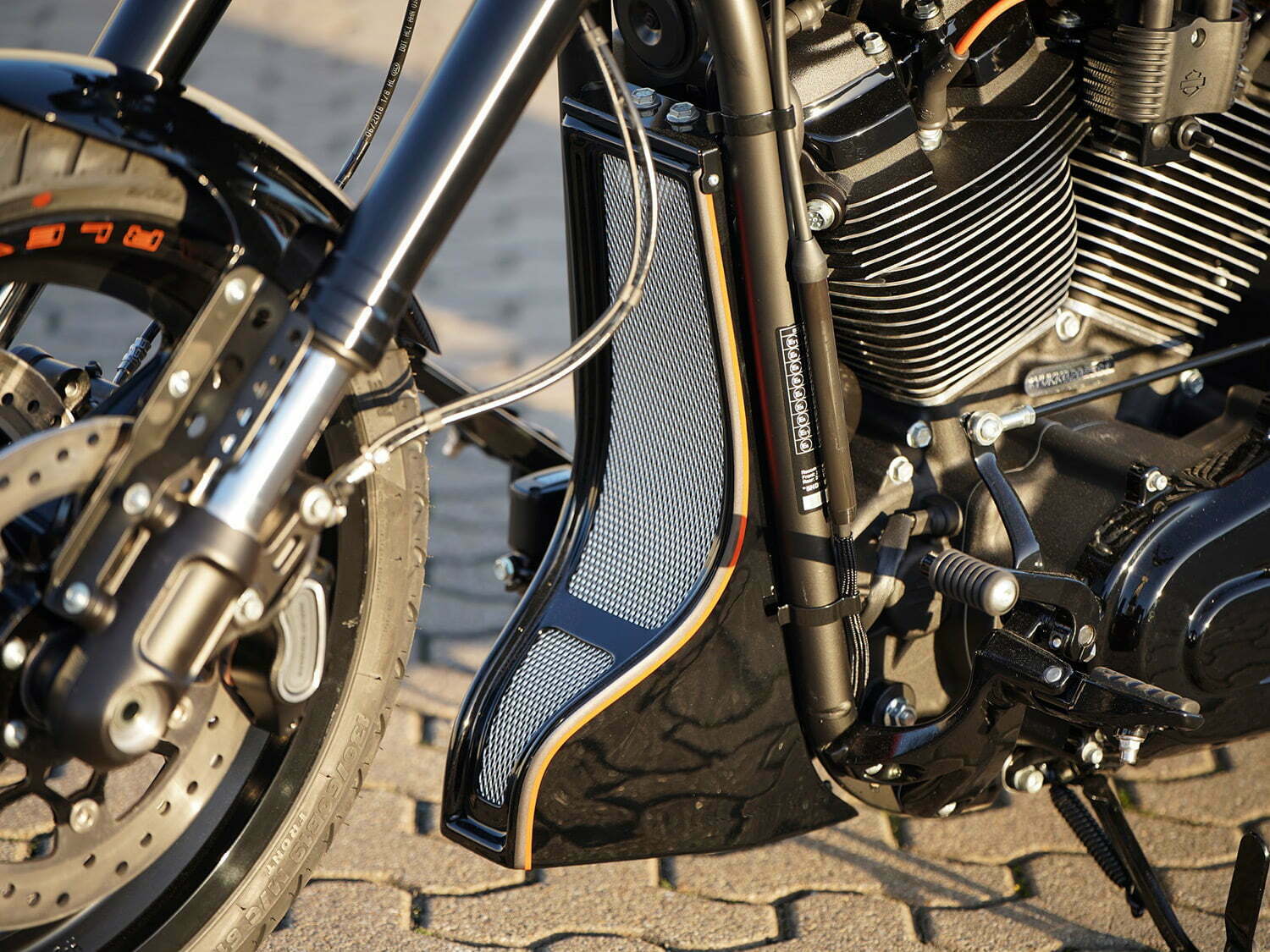 A new fender and chin spoiler occupy the front end…

“In the end, the FXDR provides a really good base for conversions,” Thunderbike says. While they’ve got a jump on the competition in aftermarket parts for the 2019 FXDR 114, the crafty Thunderbike bunch undoubtedly has more in store for the stompin’ Softail. 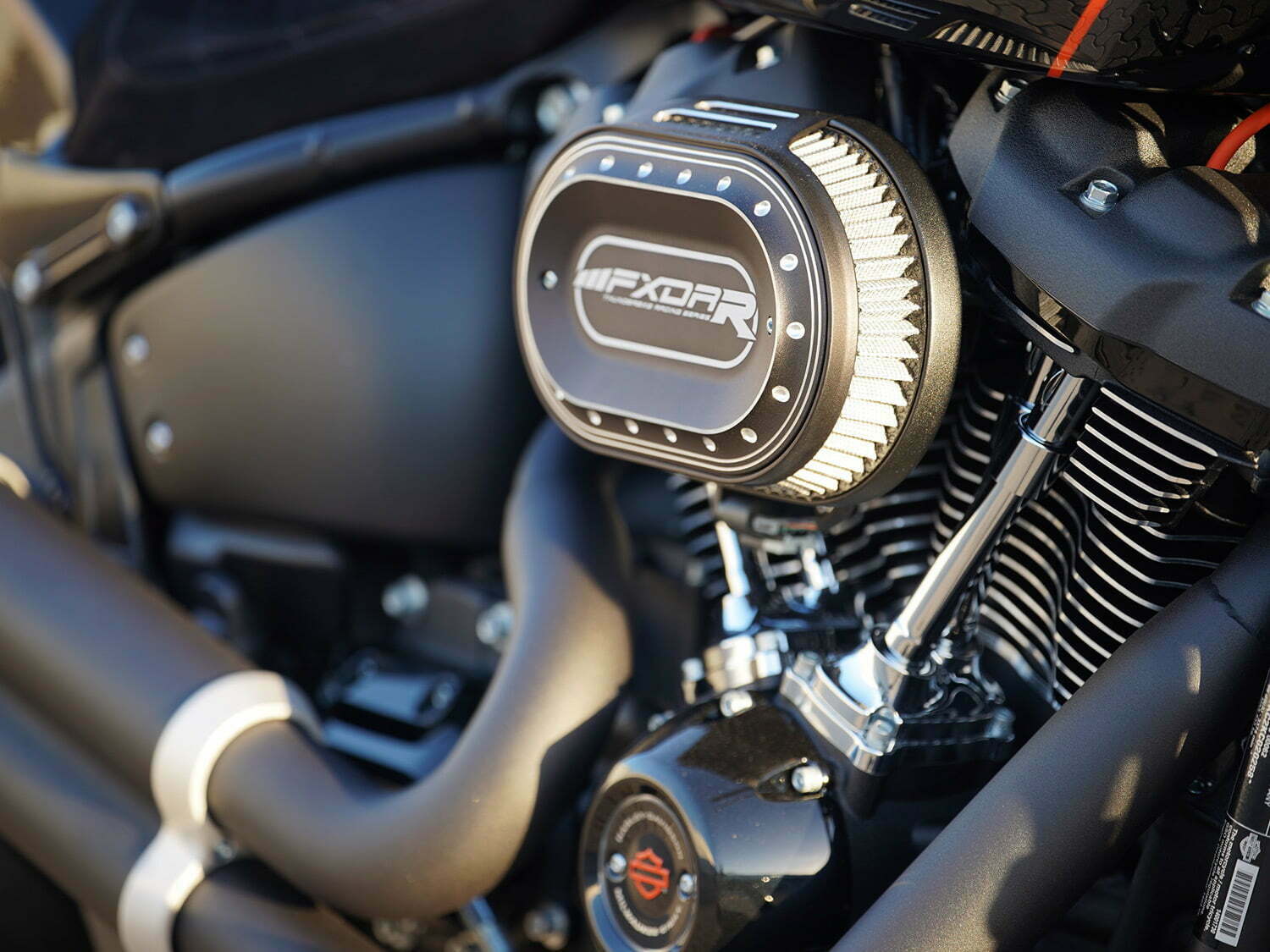 …while Thunderbike ditched the huge stock airbox in favor of its Oval Airbox for a more open, natural look. 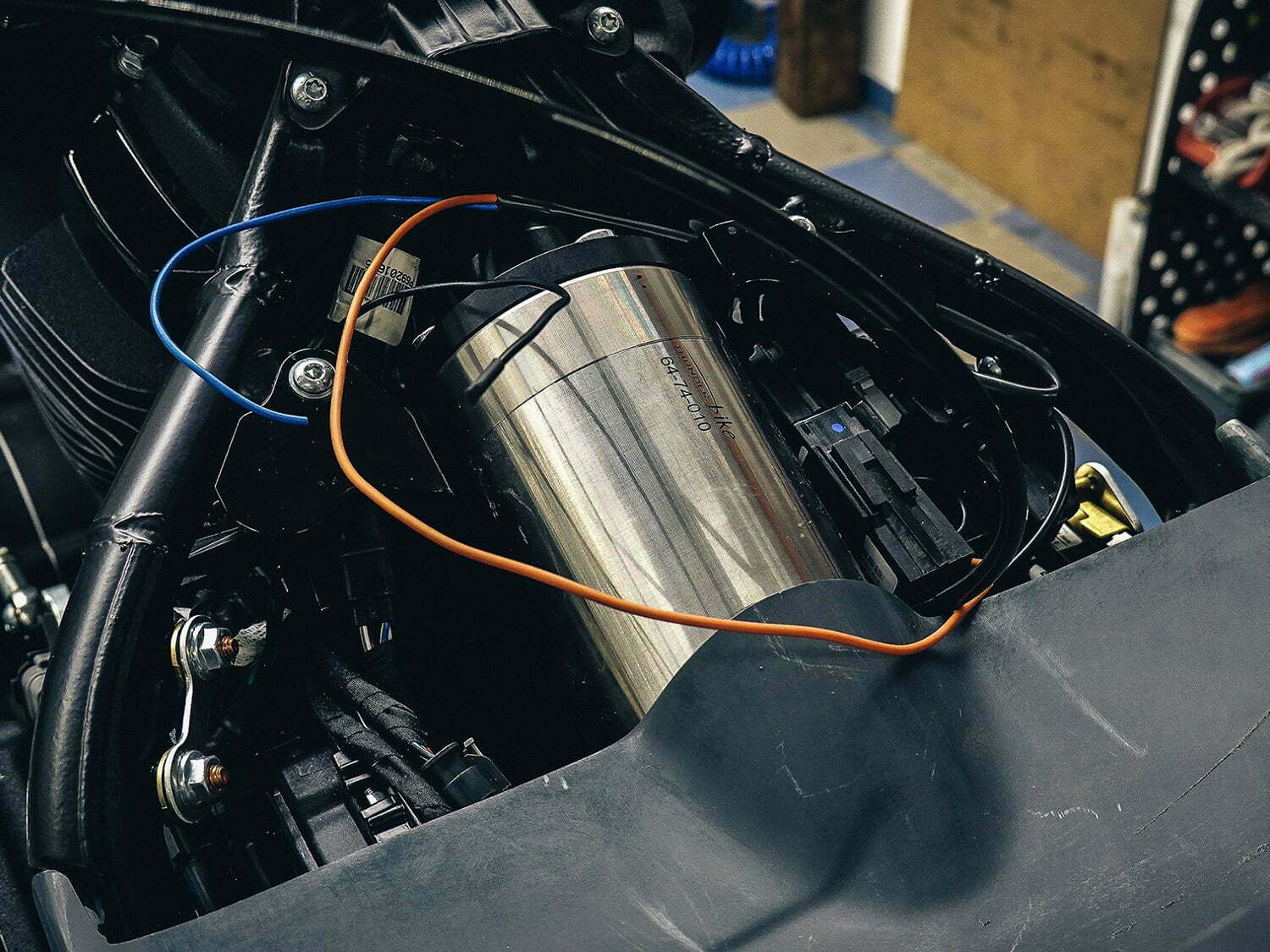 The rear monoshock was also swapped out for a Thunderbike air ride system for a lower, more drag bike look. To make room for the air system, the ignition coil had to be relocated. 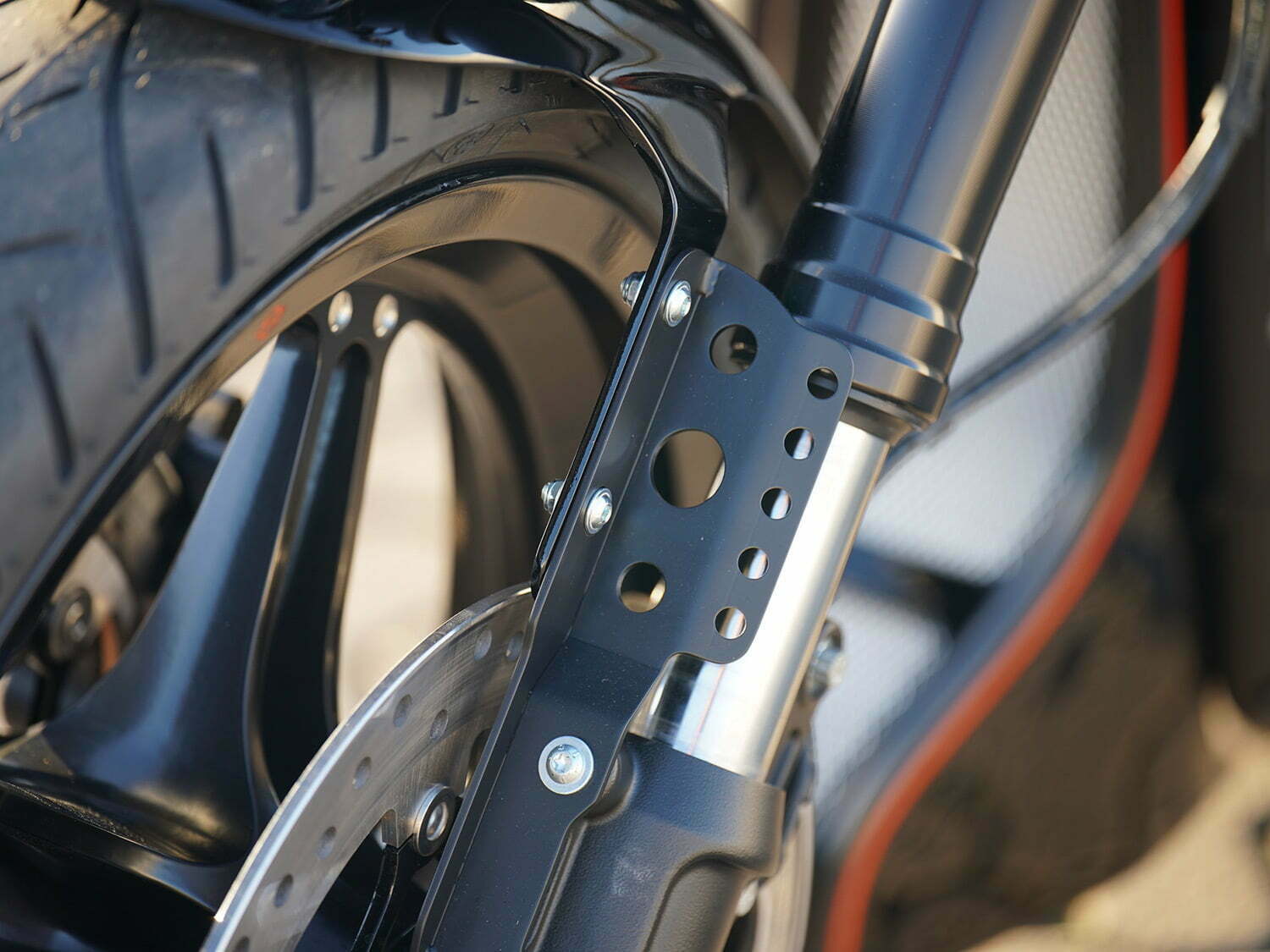 Of course, new fender brackets had to be designed to complement the new fender. 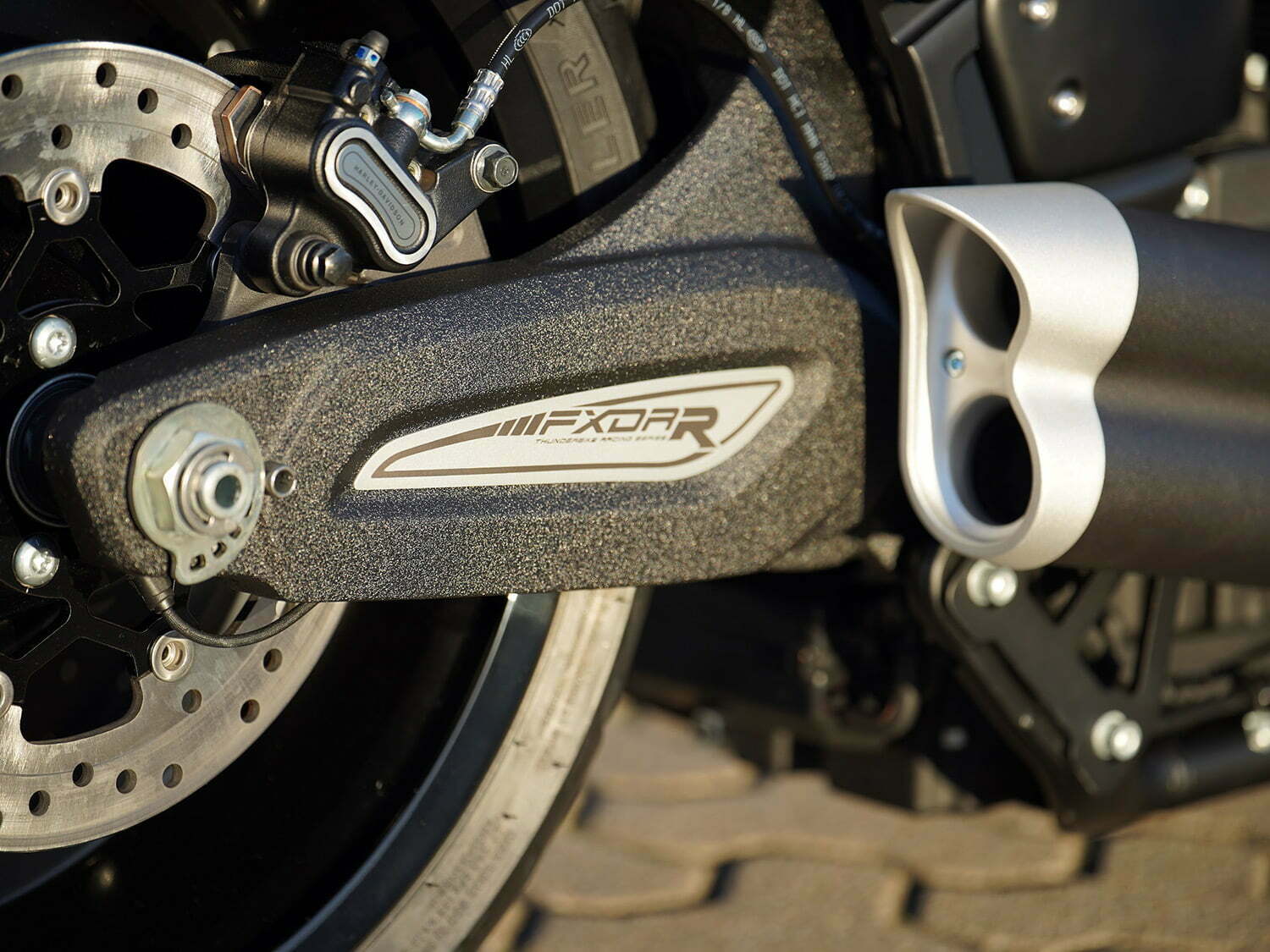 Thunderbike’s Grand Prix staggered exhausts (and tips) are cleaner and more compact than Harley’s 2-into-1 arrangement. 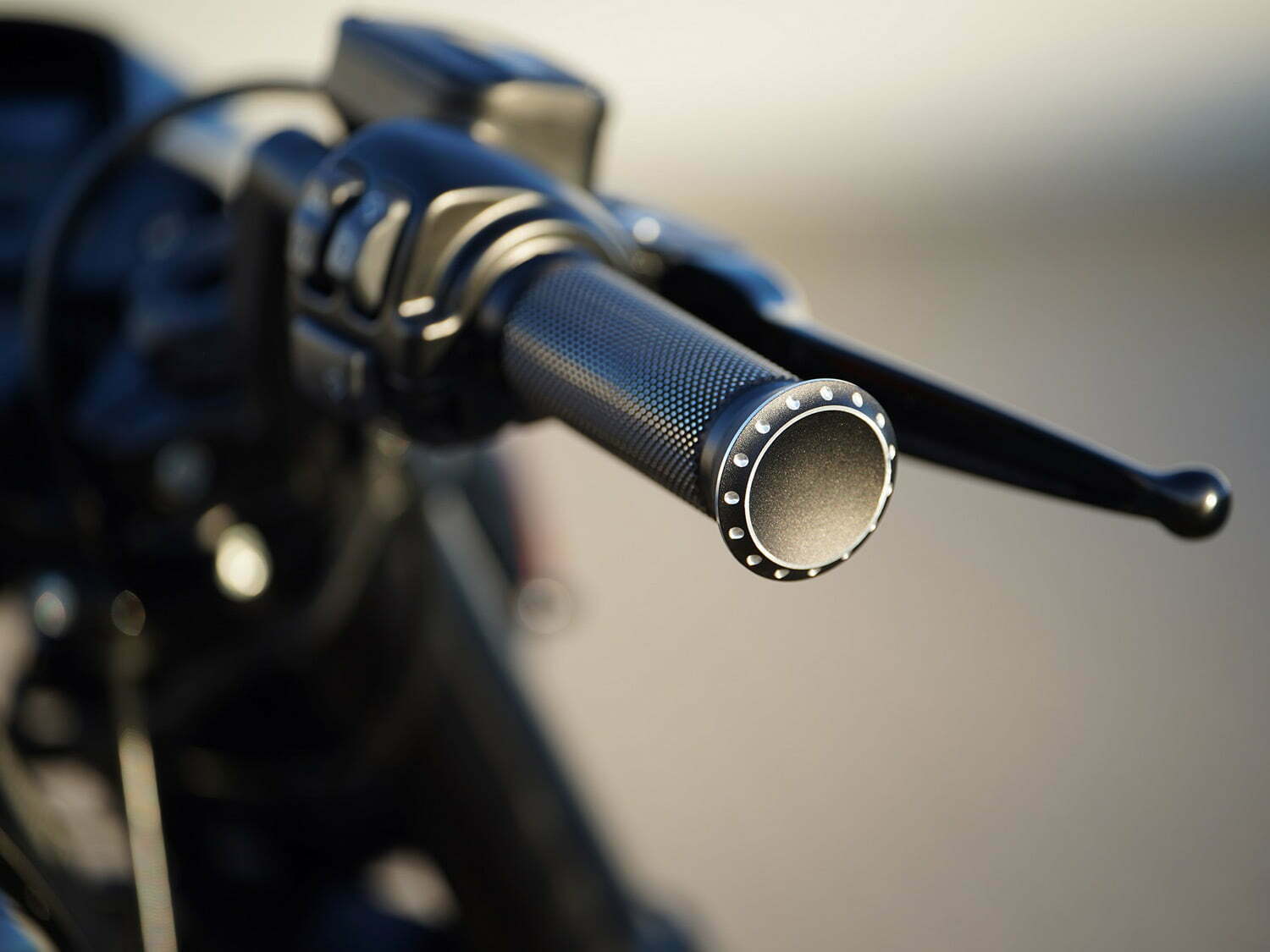 Clean but distinctive Thunderbike Satin Grips cover the ends of the bars, and riff on the air cleaner cover design.