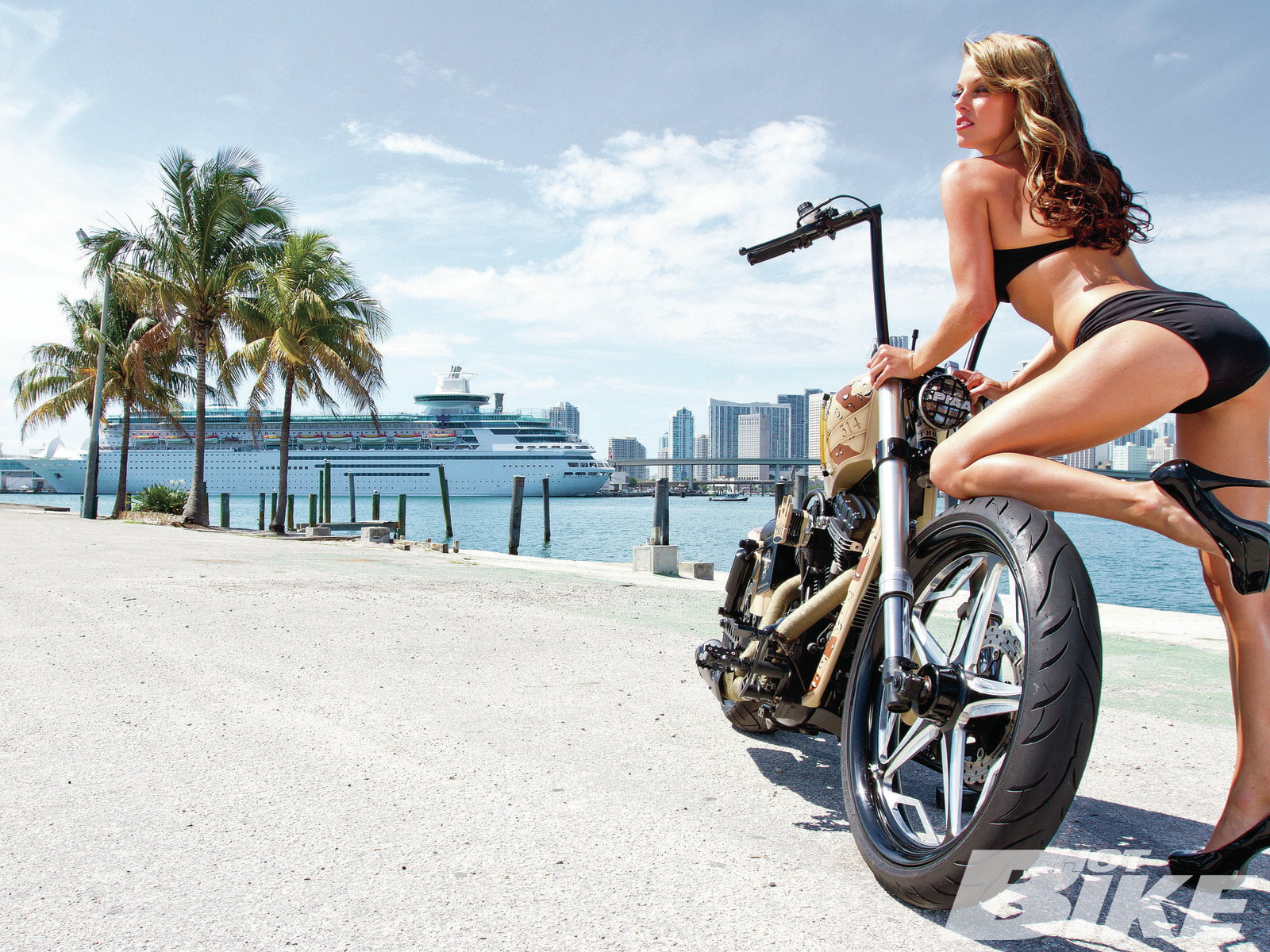 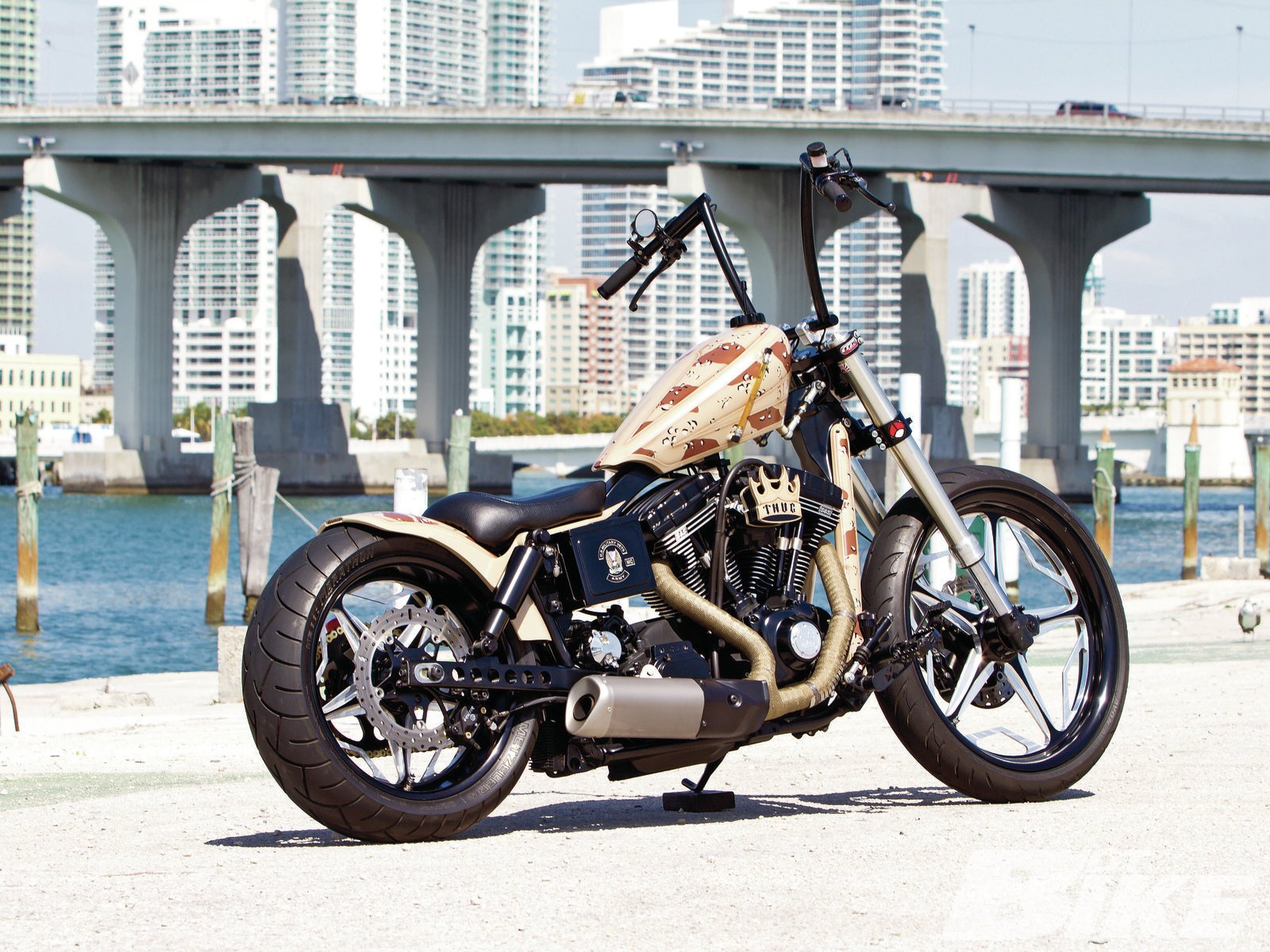 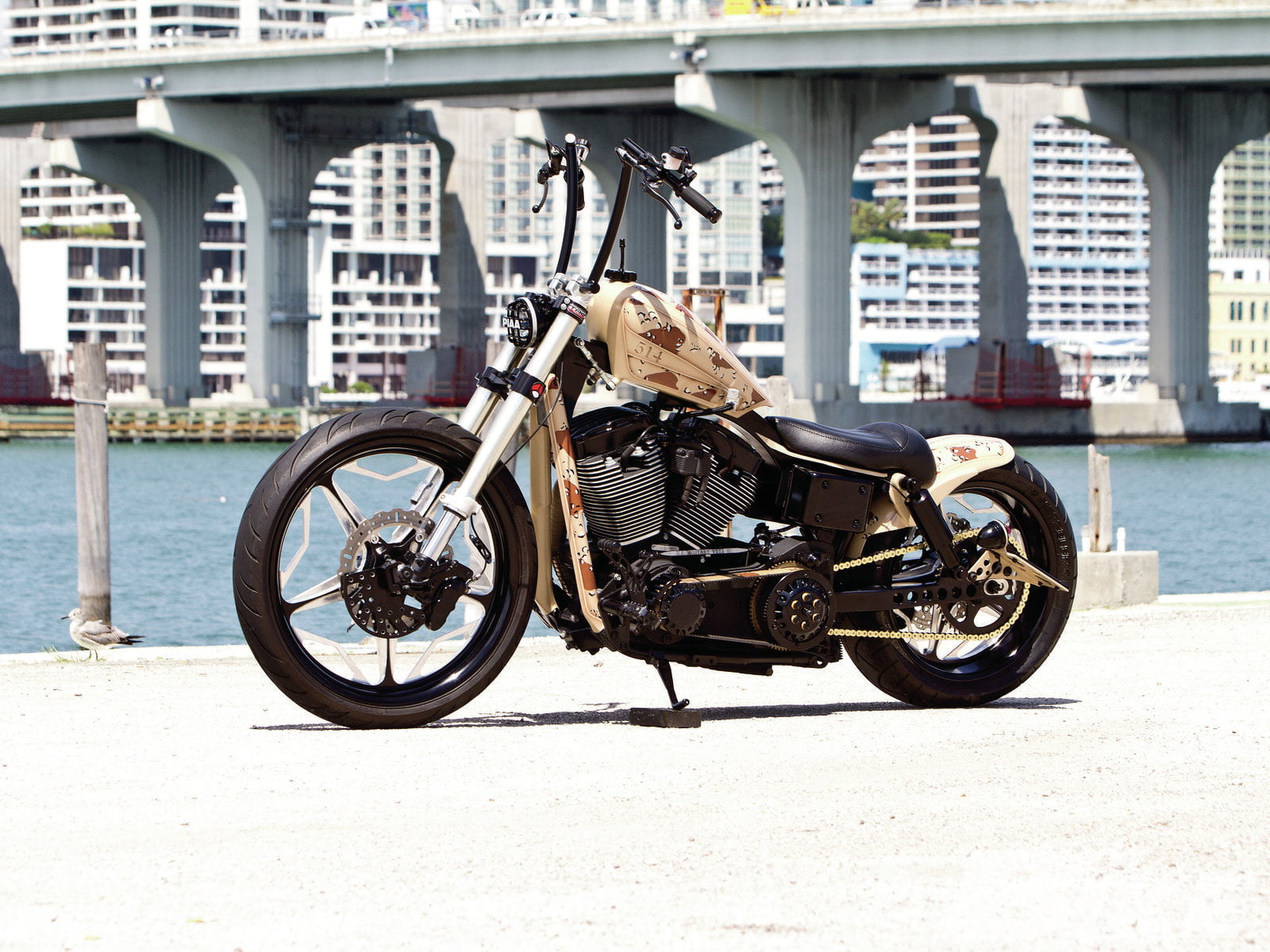 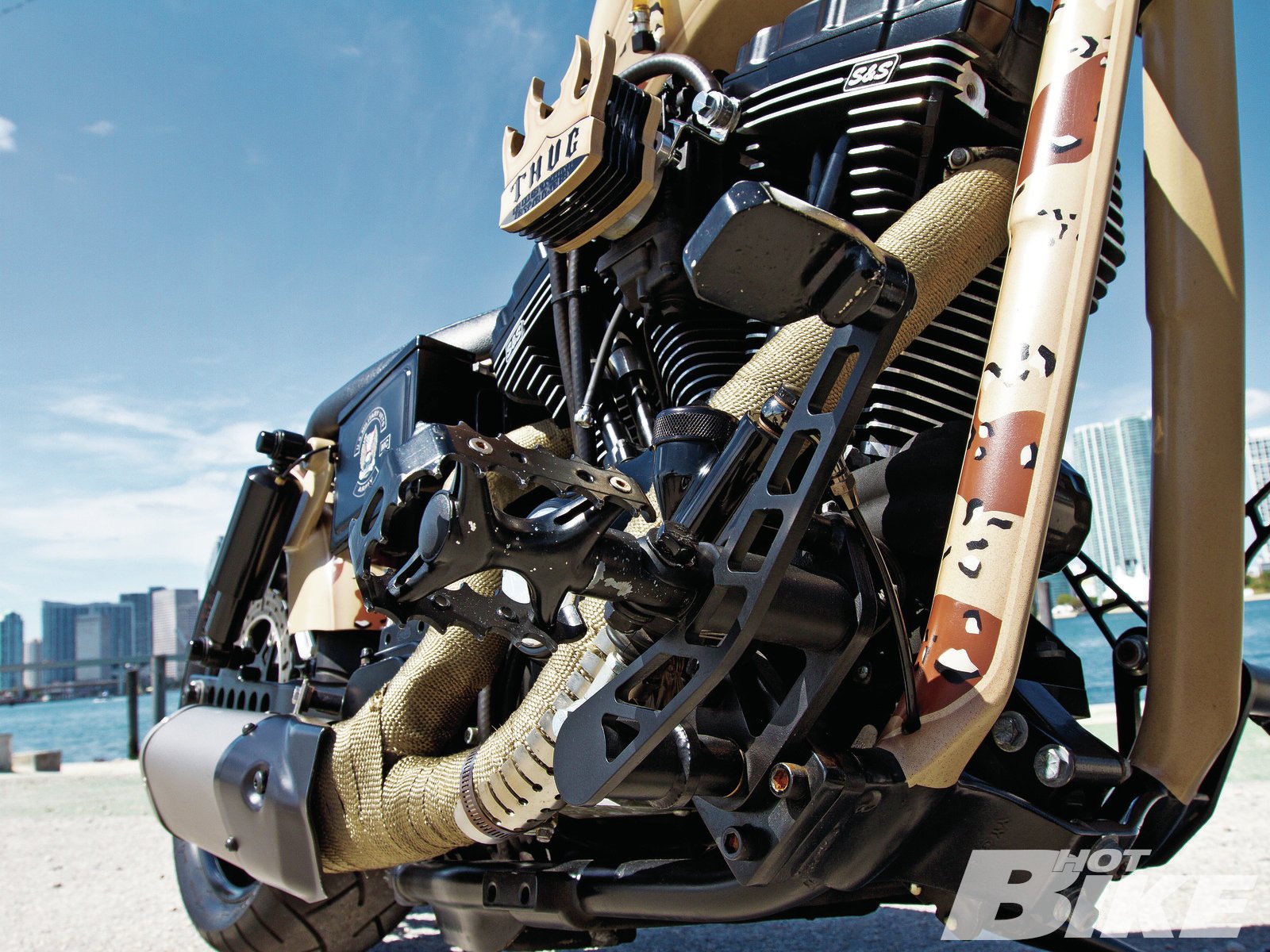 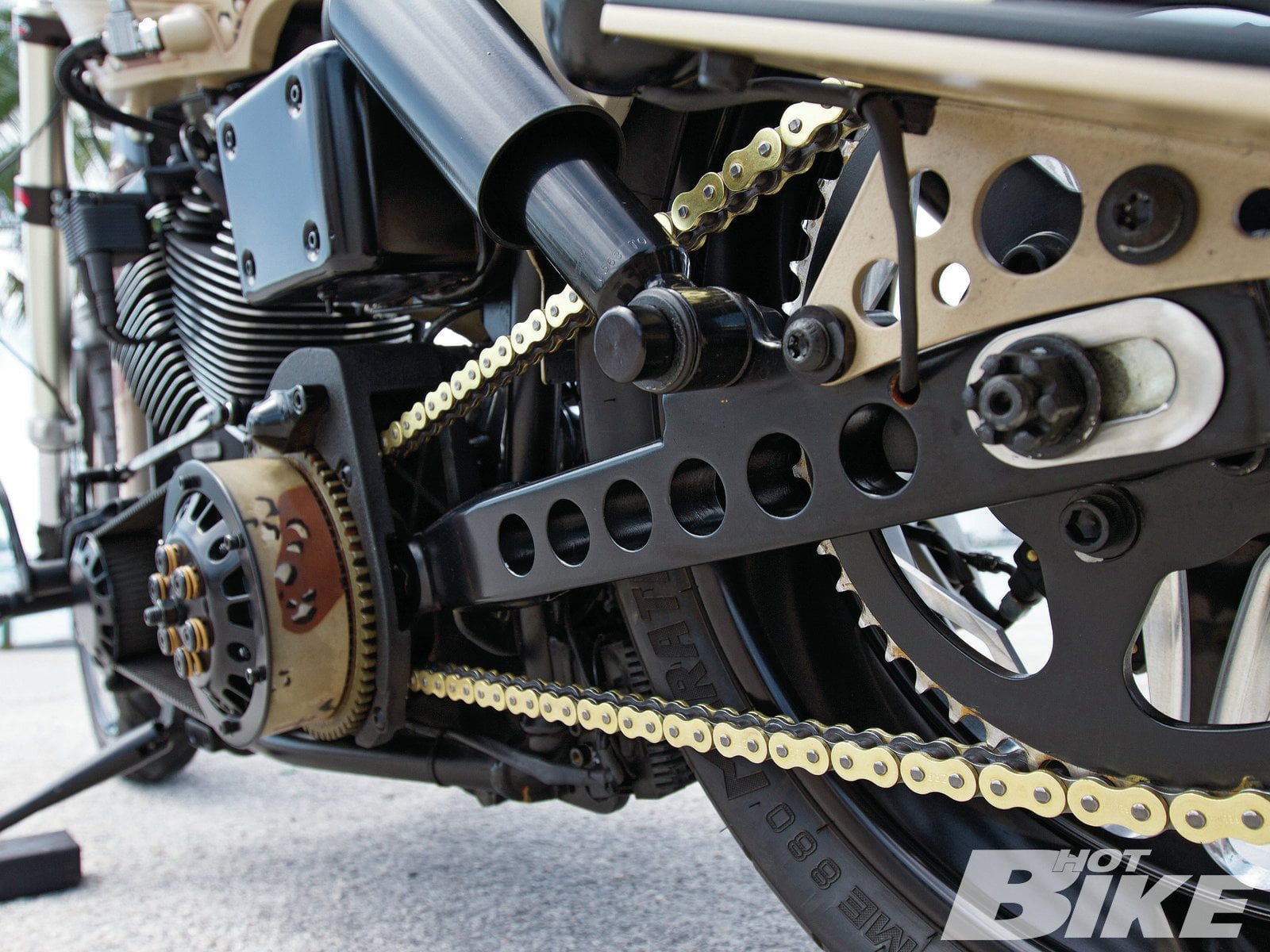 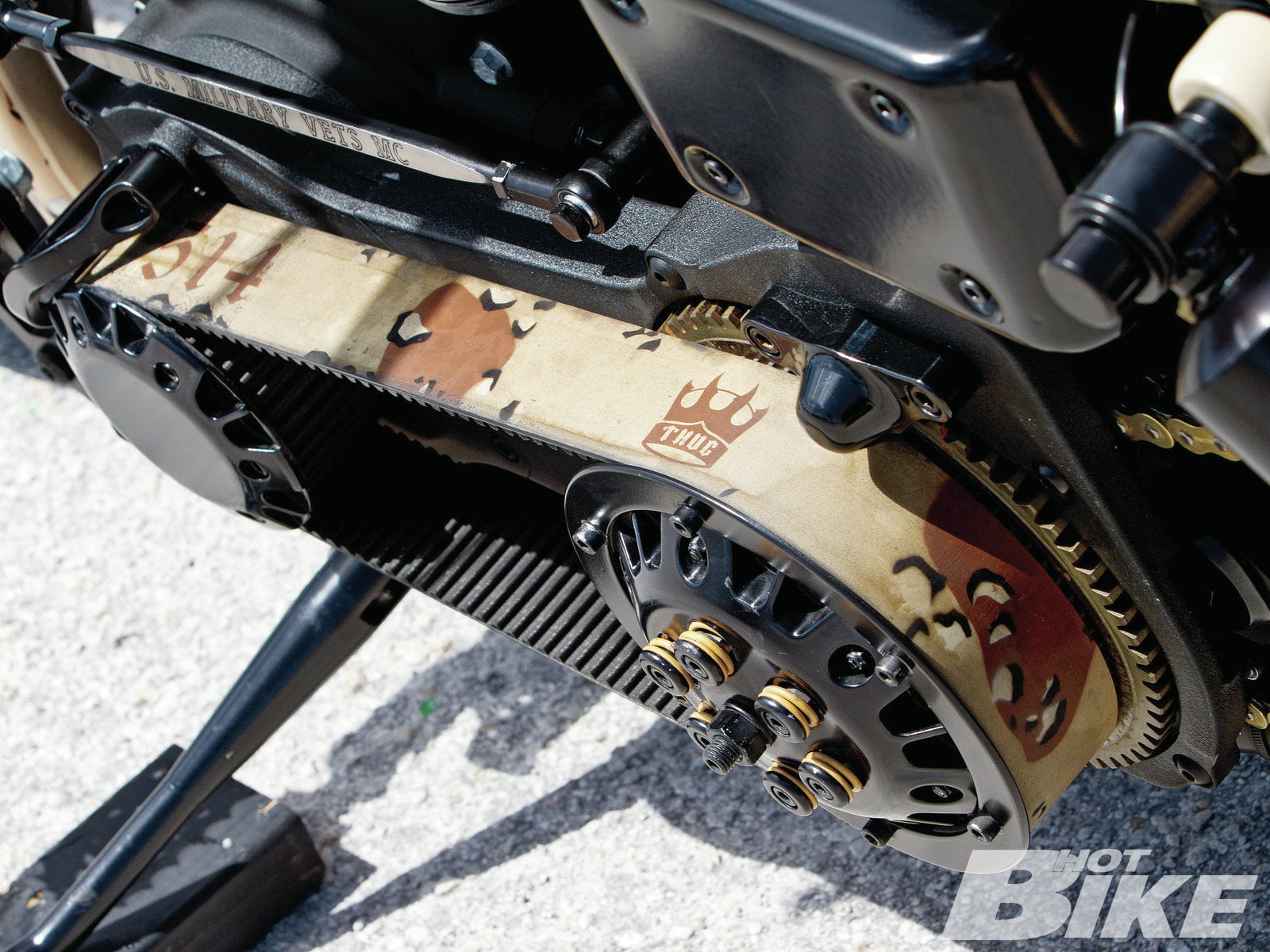 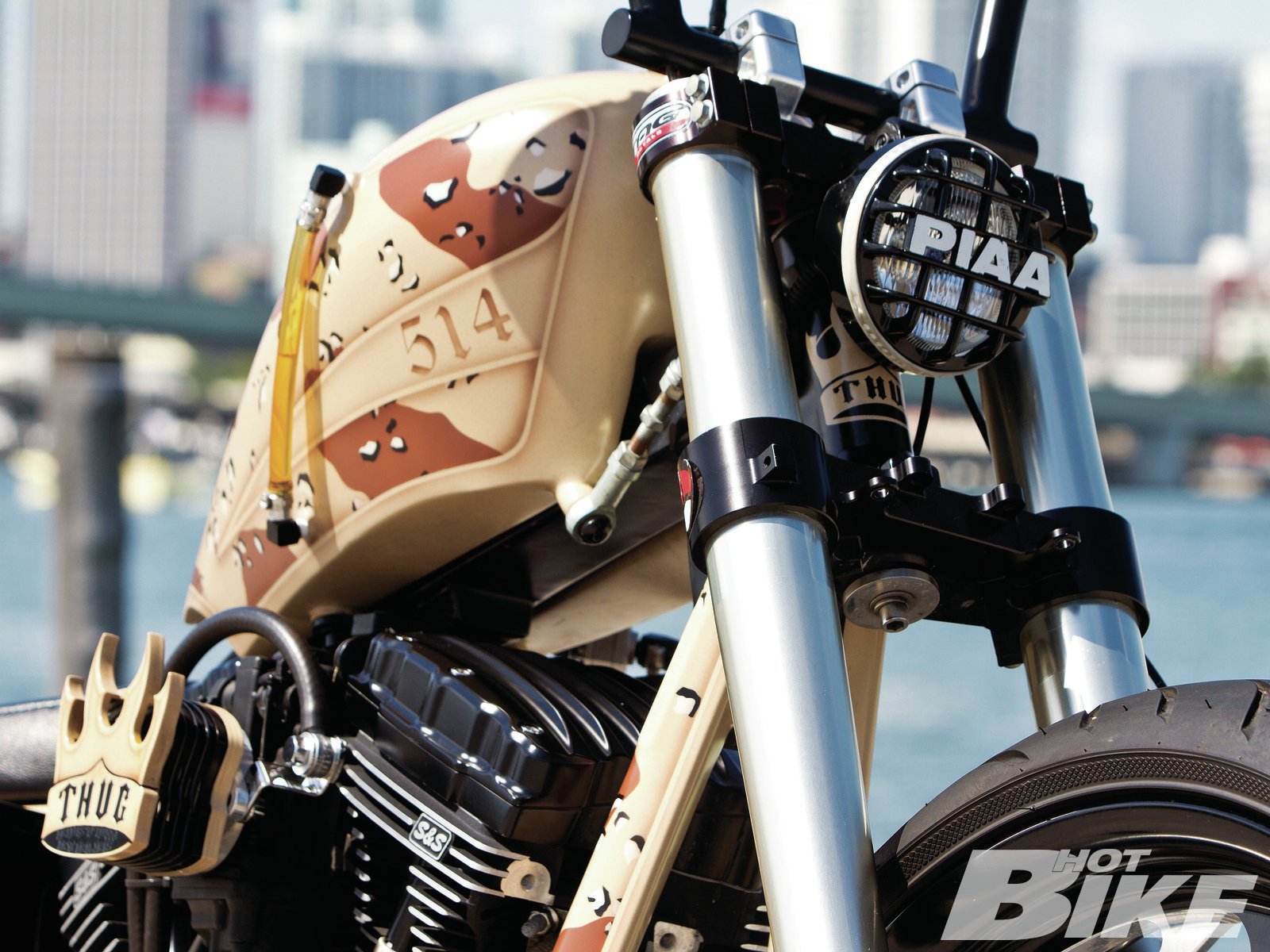 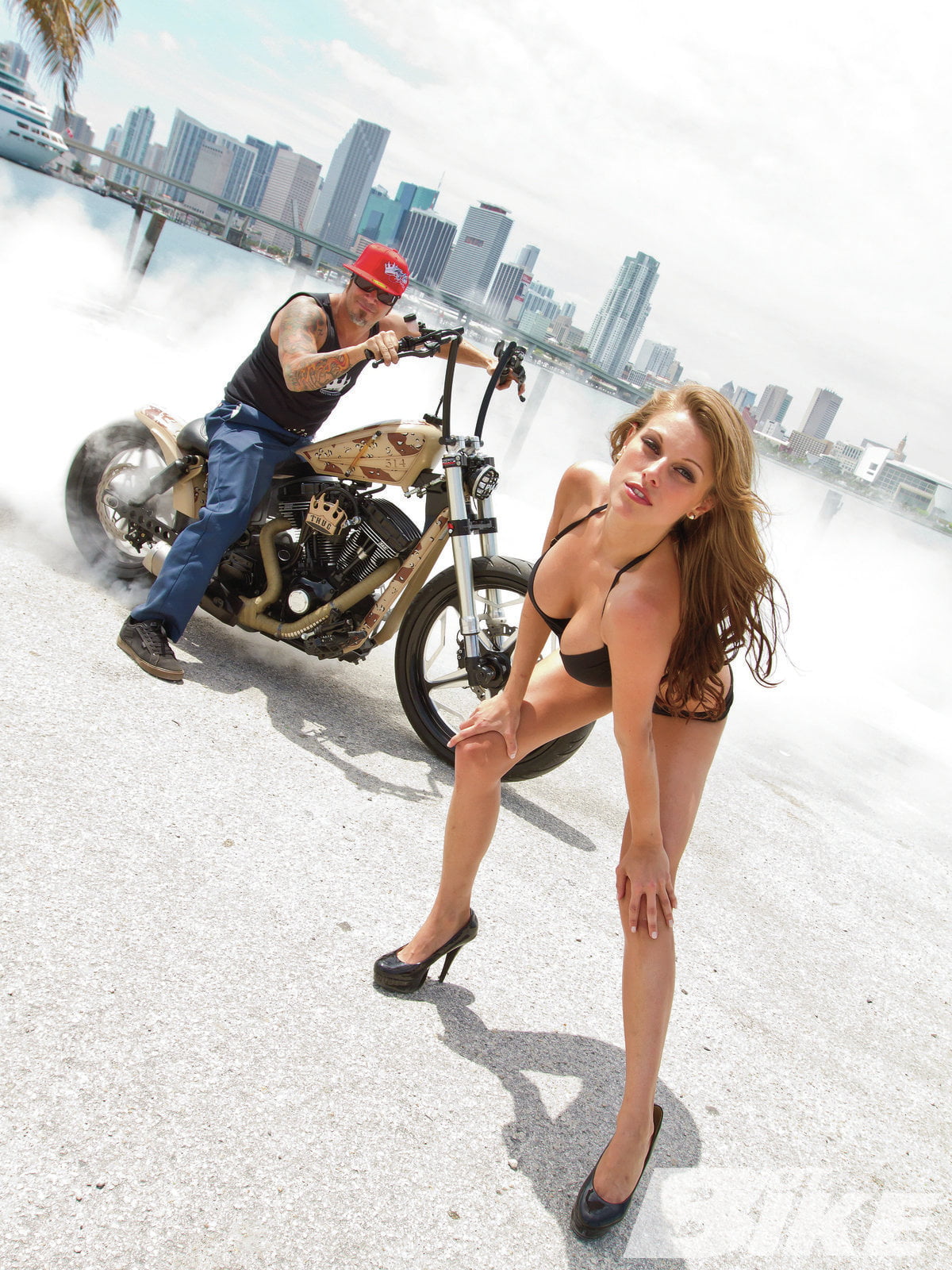 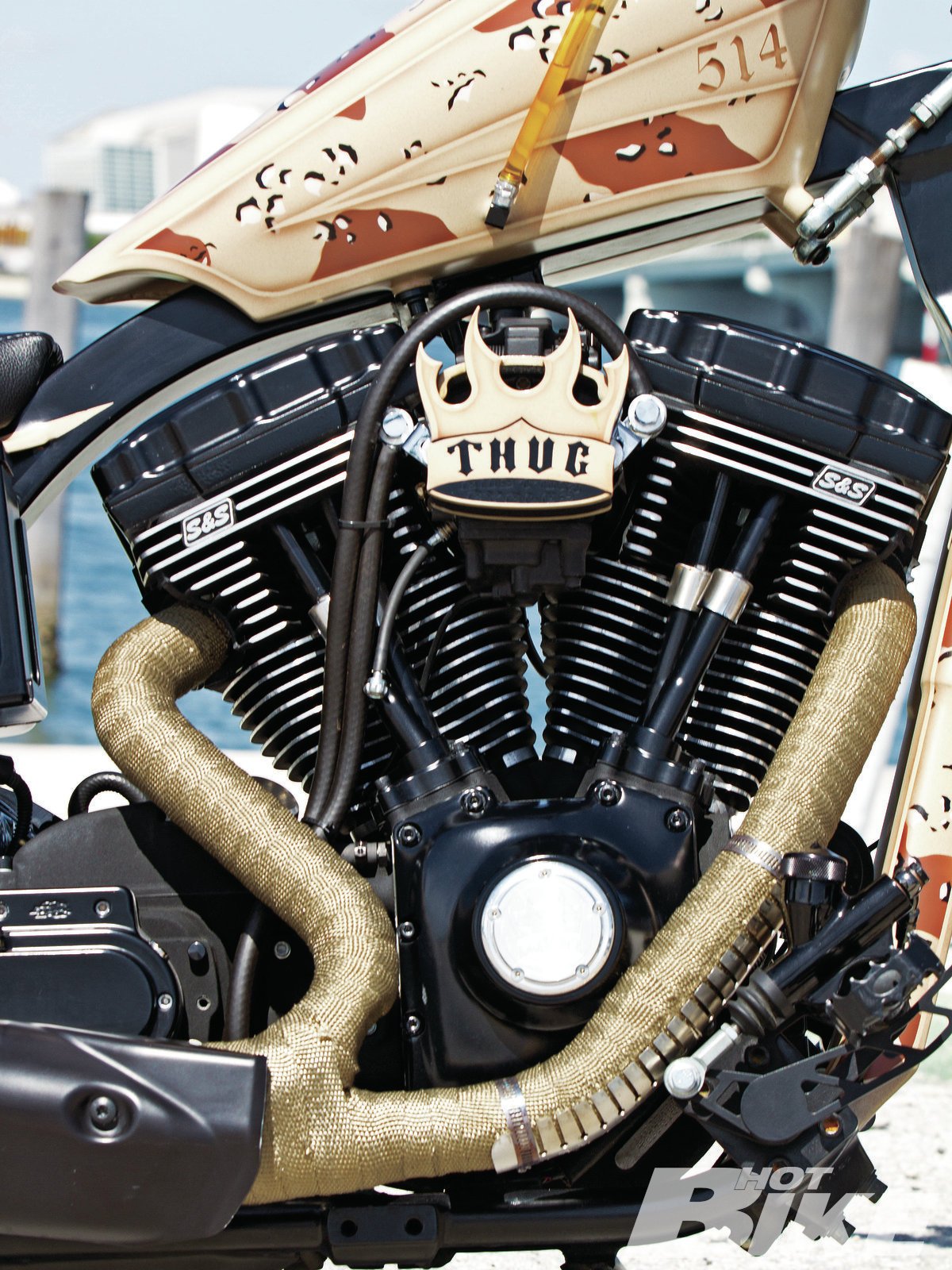 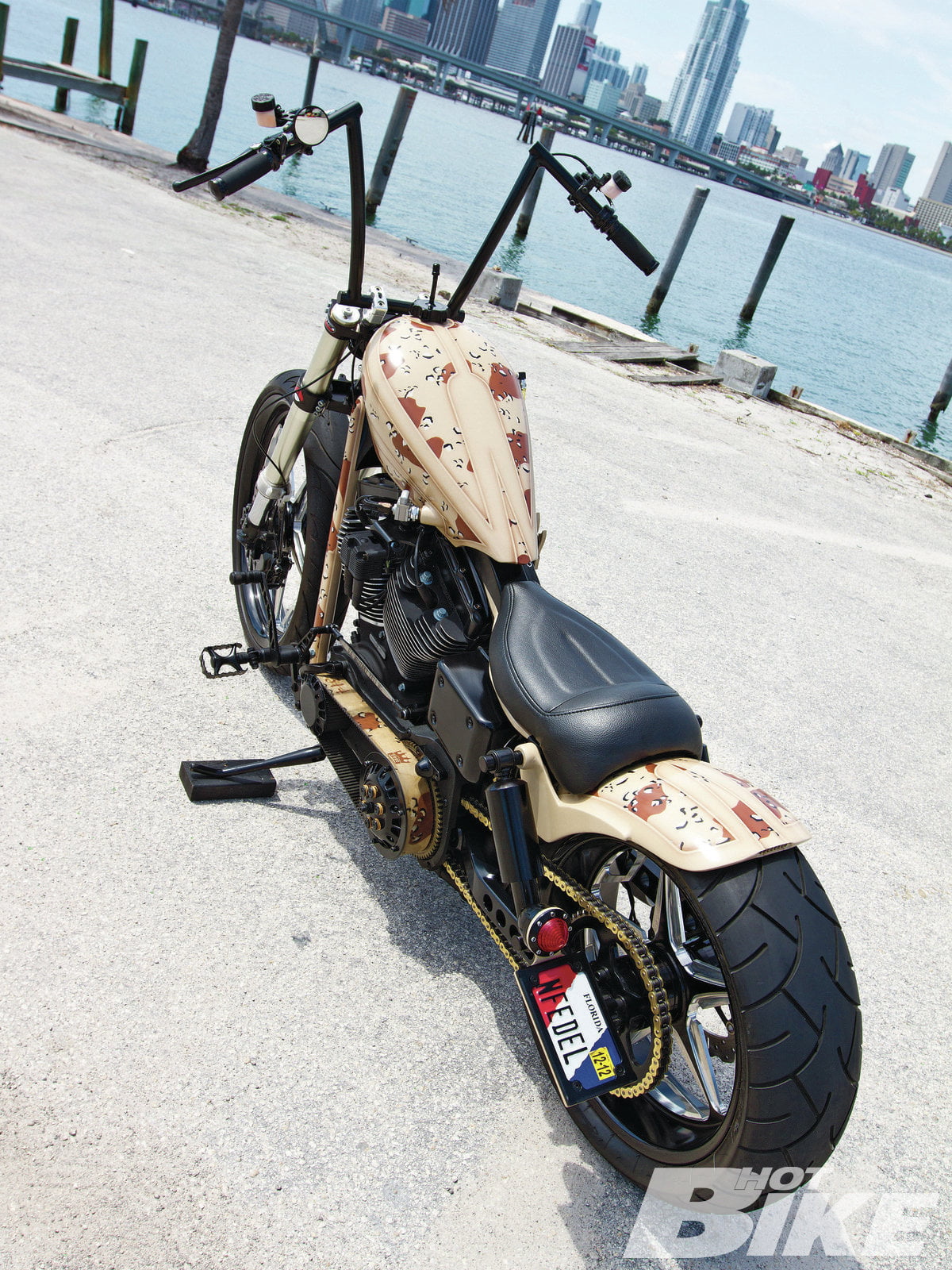 Bike builders and women have a lot in common. In order to get them to do what you want, often the best way is to say it can’t be done. Usually when faced with the challenge of something seemingly impossible, the floodgates of imagination and ingenuity are open wide and the impossible becomes possible. When Greg Calvis approached his childhood friend Tom Keller of Thugs Cycles to build him a small bar hopper to jump around the town, at first it started off like a usual build. They added a few parts here, which became a little more there and before they knew it, everything was torn apart and they were in the middle of creating a full-blown custom. “Over the course of the next three months it started with bars and ended up being a frame off job with everything in boxes,” explained Tom.

For both Greg and Tom, the great white whale that couldn’t be caught was fitting a 200 rear tire on a ’99 Dyna frame. For years, the critics said it couldn’t be done without a blowtorch and plenty of cutting. “Seeing most of the other shops’ builds, Greg wanted something different than the typical bobbers he had be coming across. He wanted something unique that would stand on its own merit and he felt the Dyna was the perfect bike to be the donor. After being told by so many people that you couldn’t fit a 200 tire on that frame without an offset, we set out to prove them wrong.”

And so they did. But first they attacked the motor adding flow and ported S&S; heads, RSD rocker boxes, and a woods cam all breathing through a custom Thug air cleaner and exhaust that appears to have parts from a Yamaha R6. Five stars wheels were added as rollers with some trick Brembo brakes to slow that beefy motor back down. And finally after much talking, thinking, and planning a 200-rear tire was fitted inside the frame just to prove it could be done.

The paintjob is the most unique part of the bike and the theme was an easy choice, as Tom explained, “The owner was a Desert Storm Army veteran and is a member of the US Military Vets MC and wanted it to be part of his history. Because of the tricky desert camo look, the paint was handed off to Be Unique, which in a short time, pulled a work of art.”

When the dust settled and paint dried, the two stepped back to see what they had created. And despite its camouflage exterior, there’s no blending in with the crowd with this chopped, hacked, wide-stance Dyna. Never say never again. HB