Resurrecting The Spirit Of The XLCR 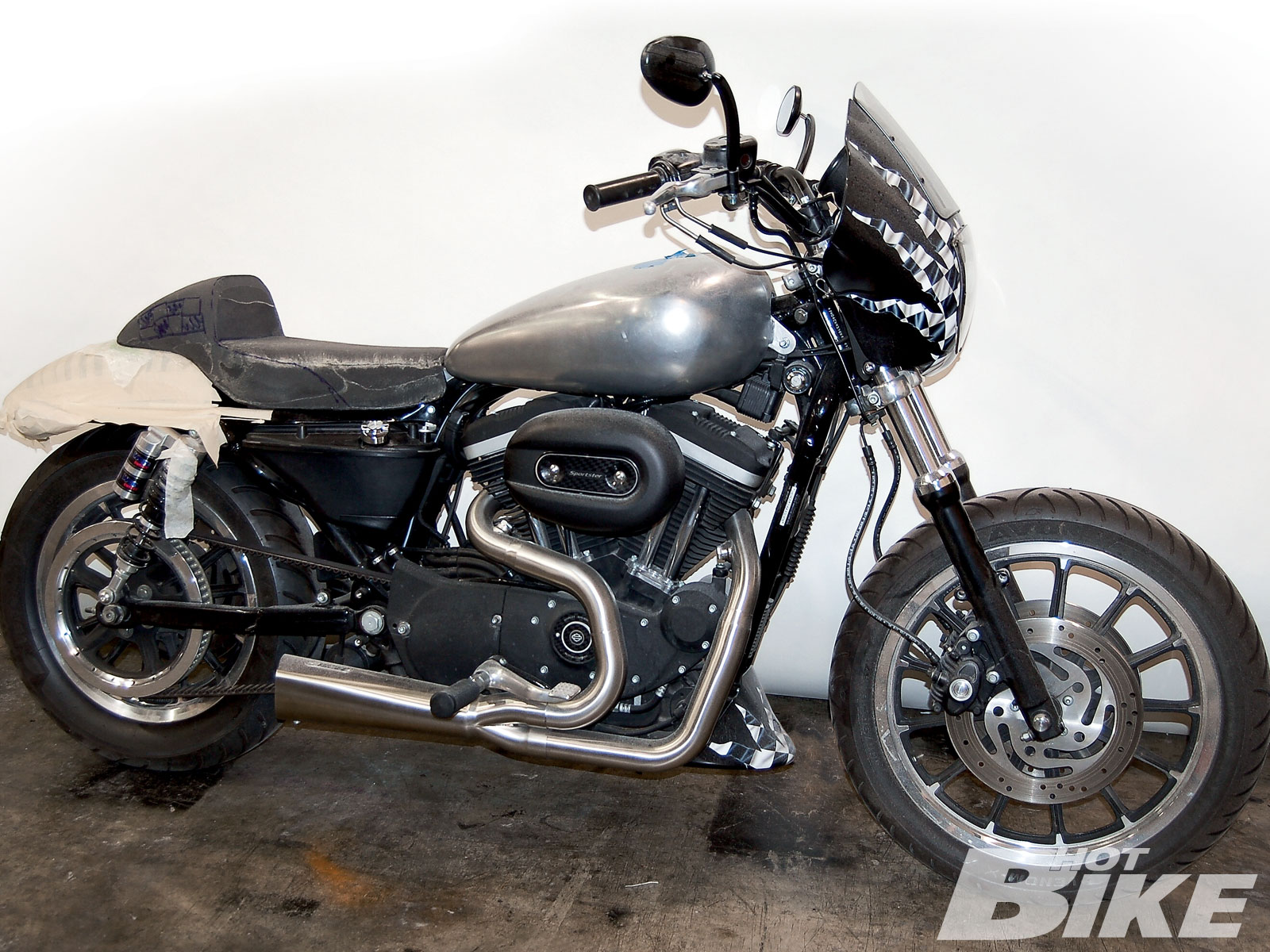 Here’s the XLRCR part way through its transformation. 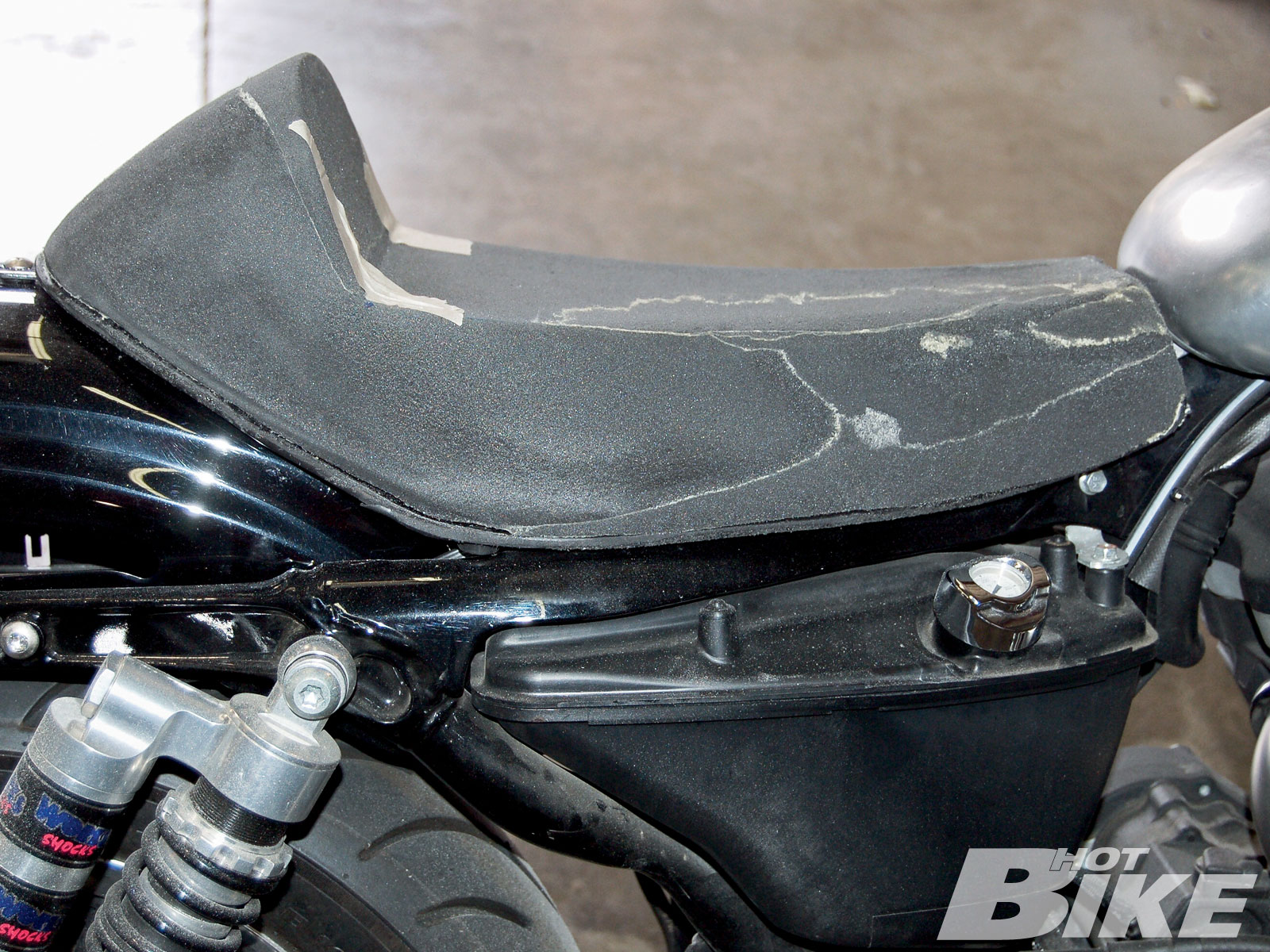 01. The prototype seat was too short, front to rear. Saddlemen said no problem, and set out to make it longer. 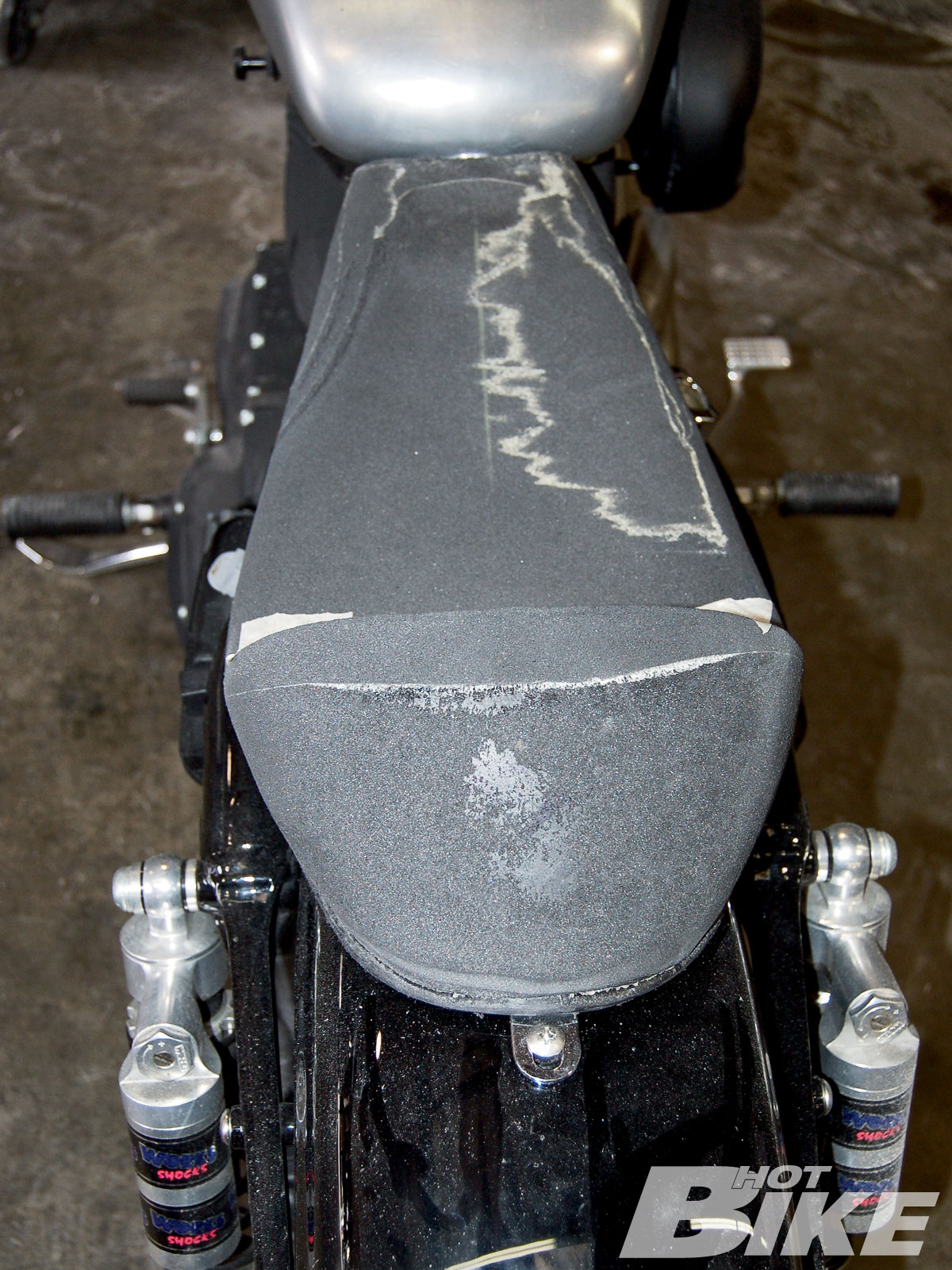 02. This top view shows the taper that I wanted. It was perfect. The taper makes it easy to lean from left to right while cornering. 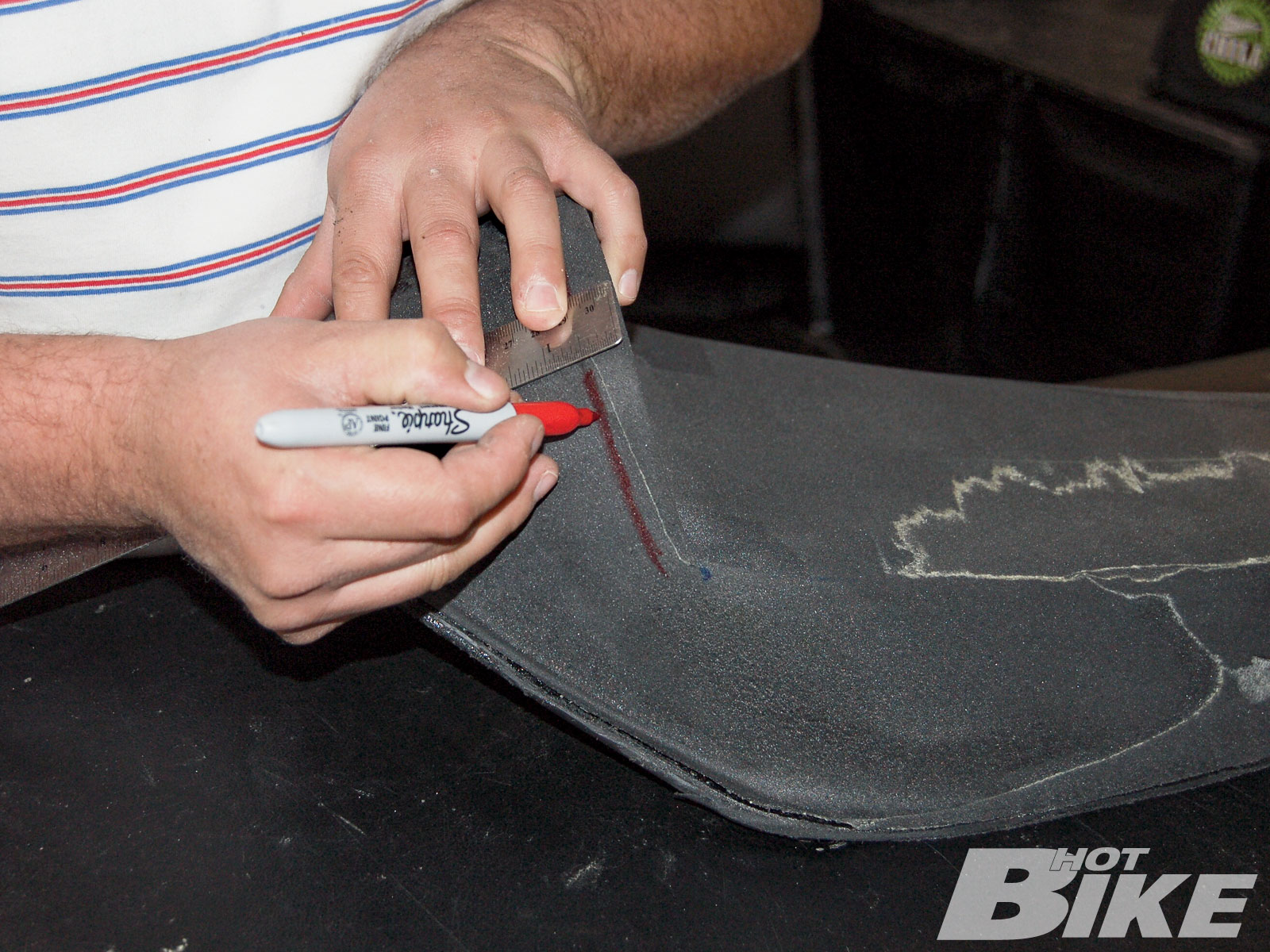 03. I decided to make the rear hump slightly smaller, so the section was marked to be trimmed. 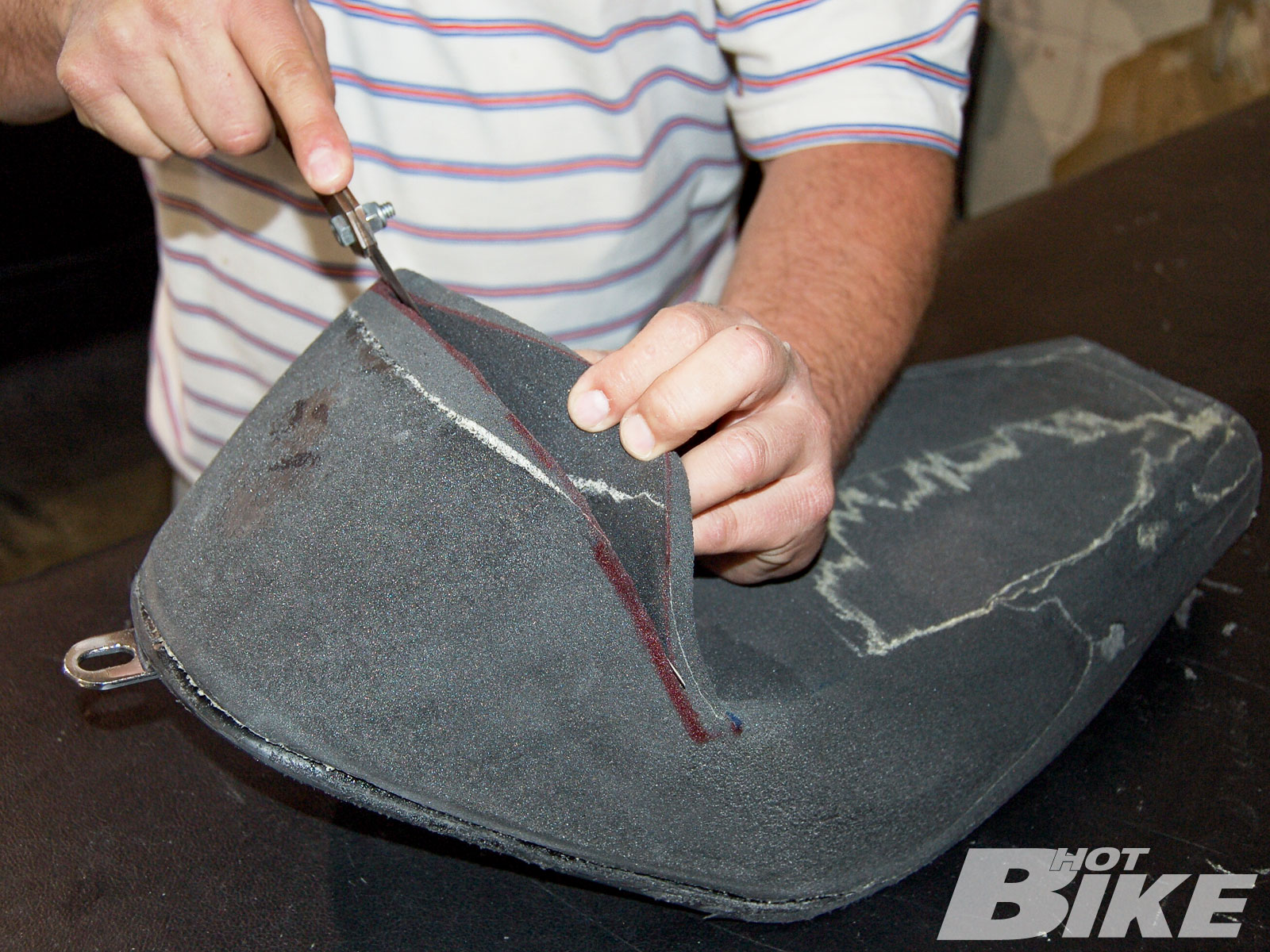 04. The sharp razor blade cut through the foam like a hot knife carving its way through butter. 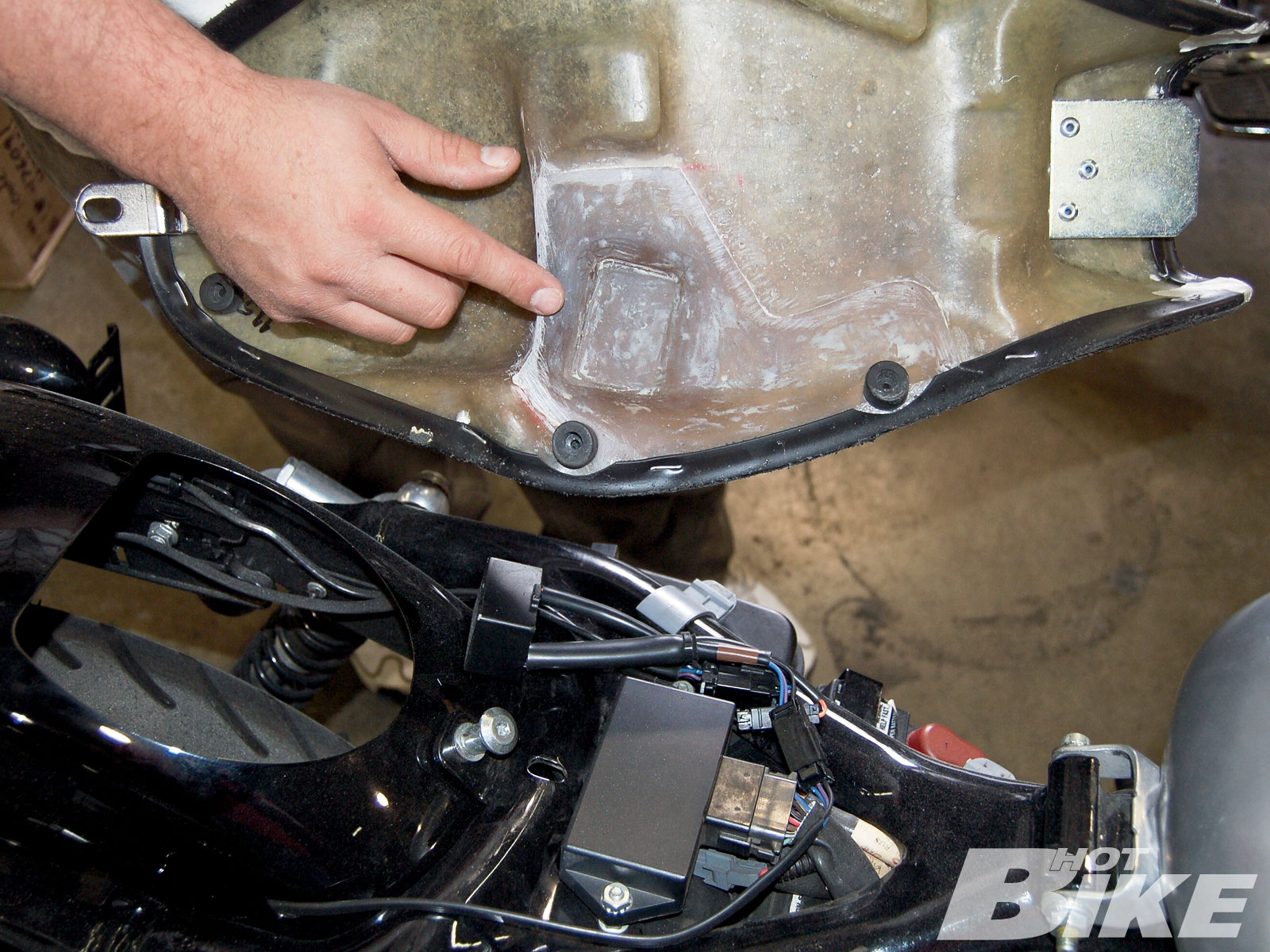 05. The hand-formed seat pan has recessed areas for the bike’s electrics, and uses the stock mounting fixtures. 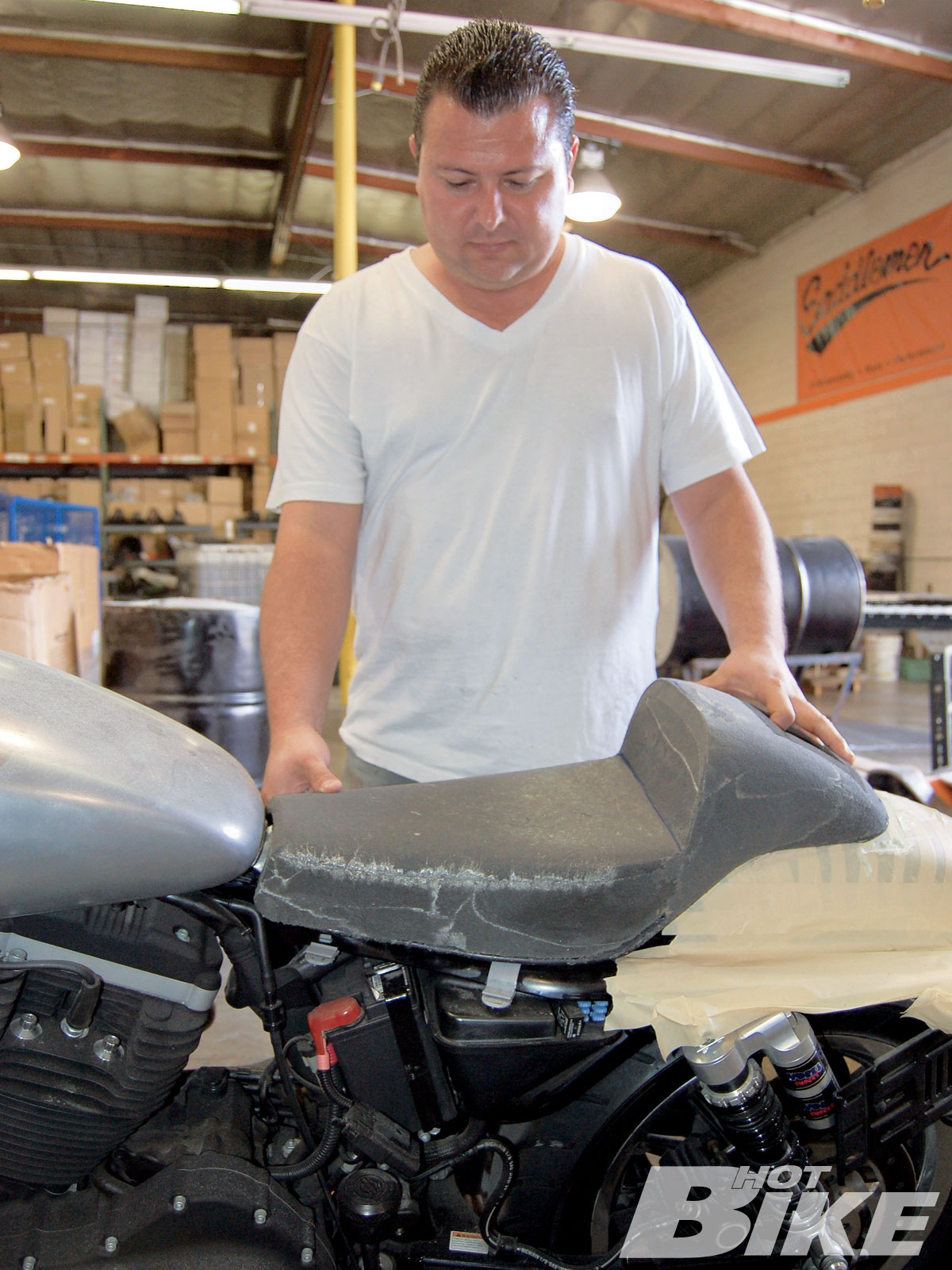 06. The revised custom seat was fit onto the bike and the foam was marked to get an idea where the cover’s seams would be placed. 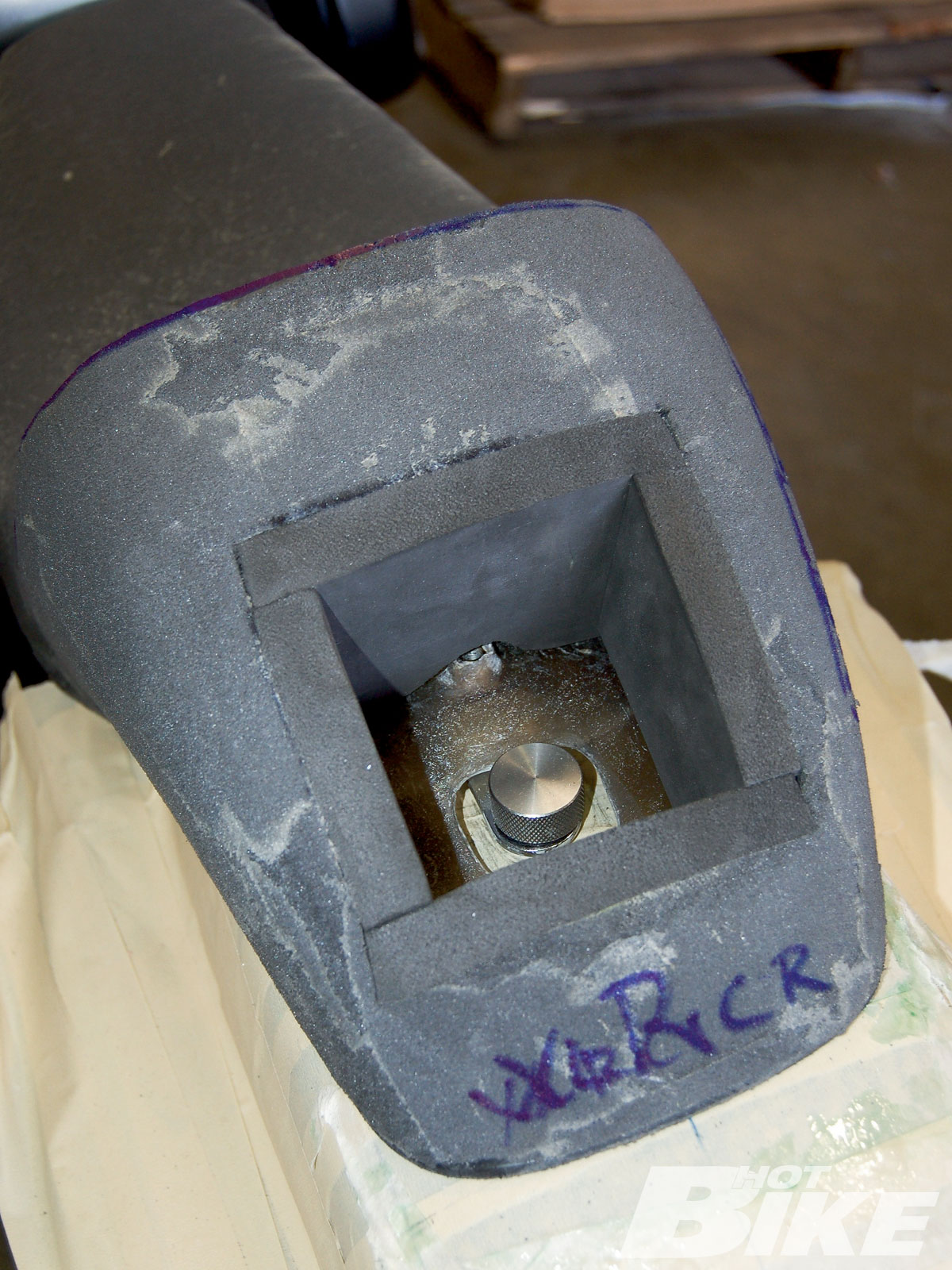 07. Saddlemen put an access hole in the seat for the Sportster’s seat screw so it’s hidden, yet easy to reach. The access hole also makes a handy stash pouch for the bike’s registration, too. 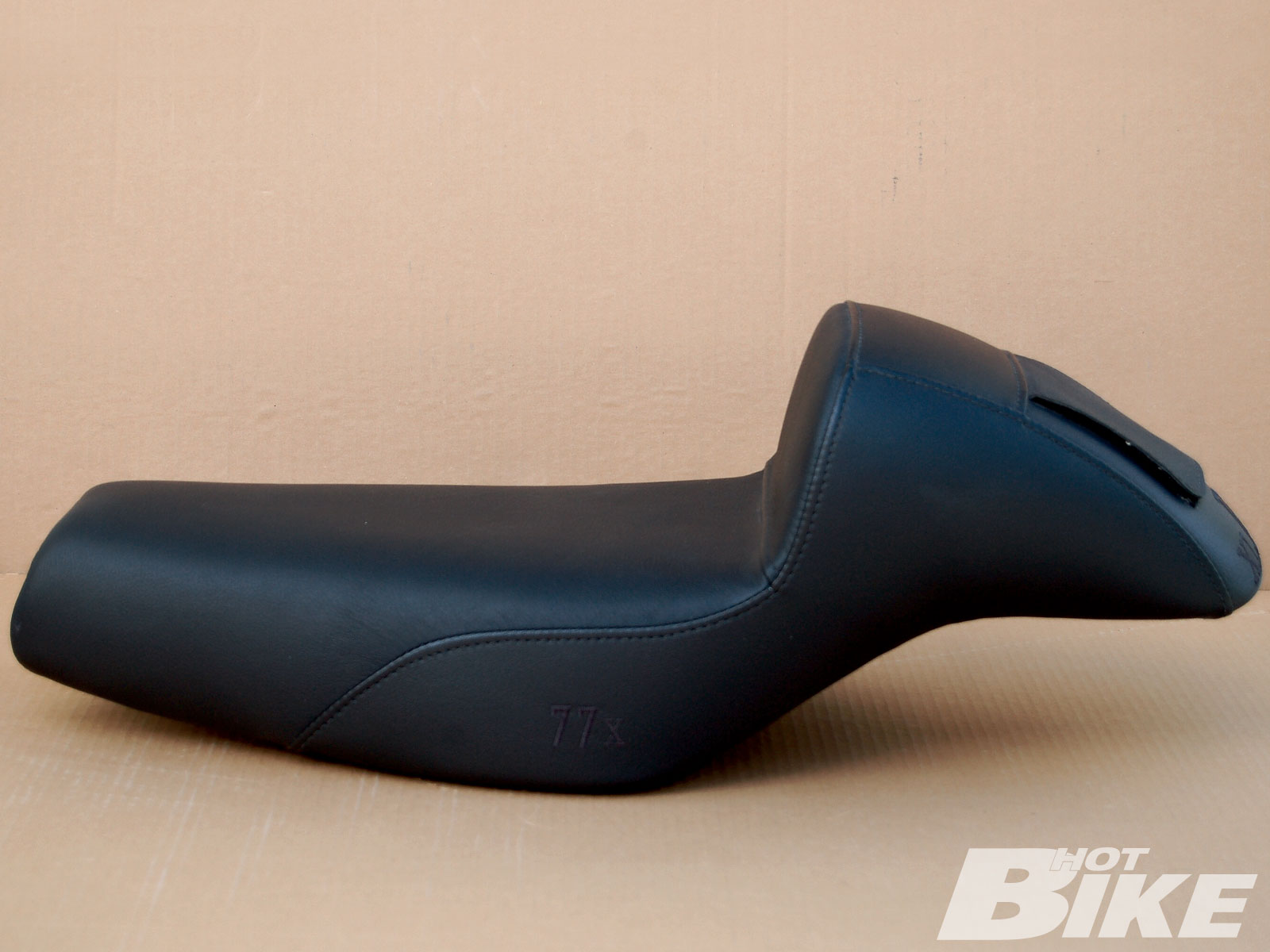 08. Here’s the finished seat. There’s also a gel insert for comfort, and the bottom is covered similar to the company’s production seats. 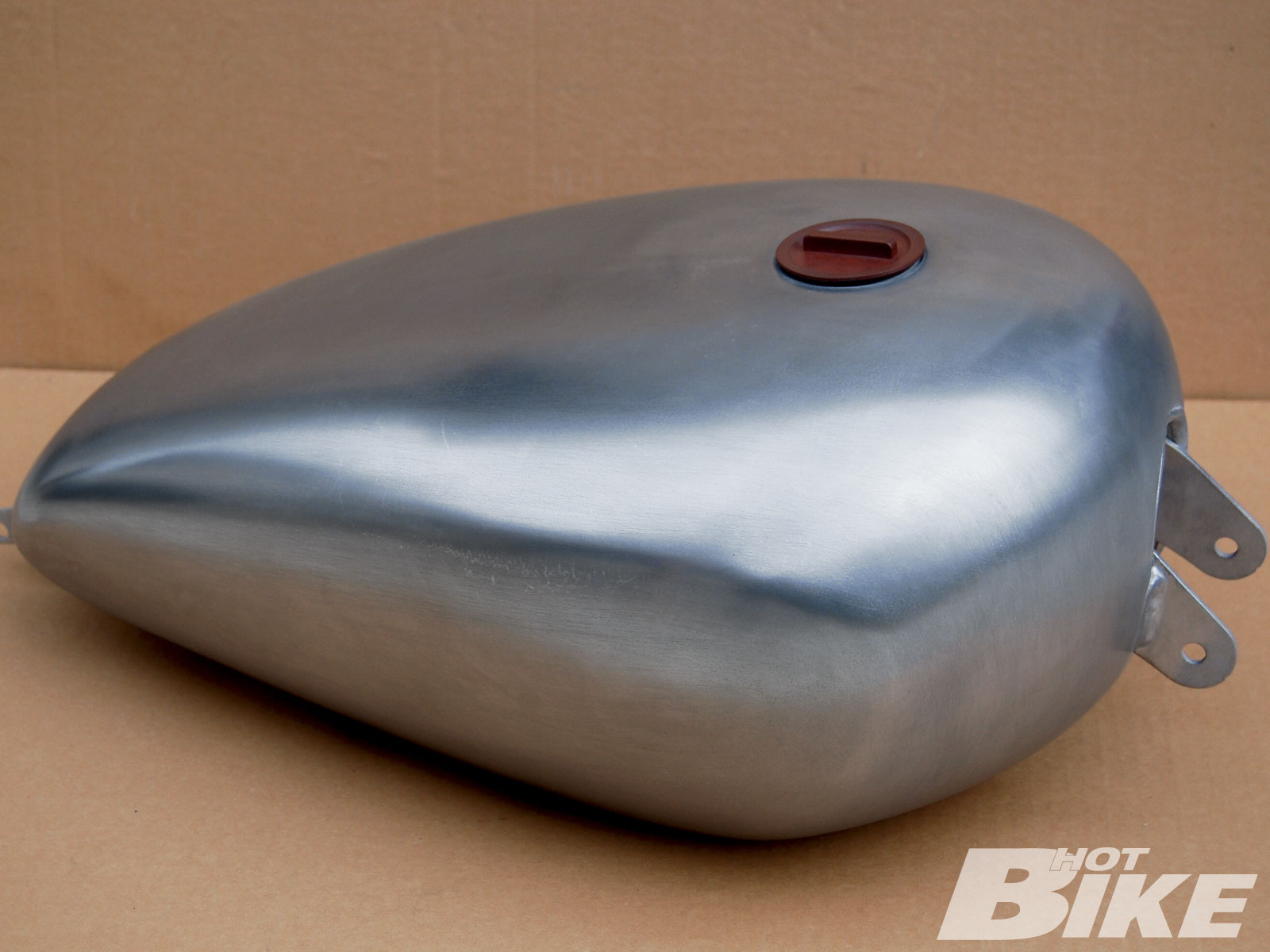 09. To give the XL Custom gas tank the look of an alloy tank, I had H.M. Elliott treat it with aluminized coating. 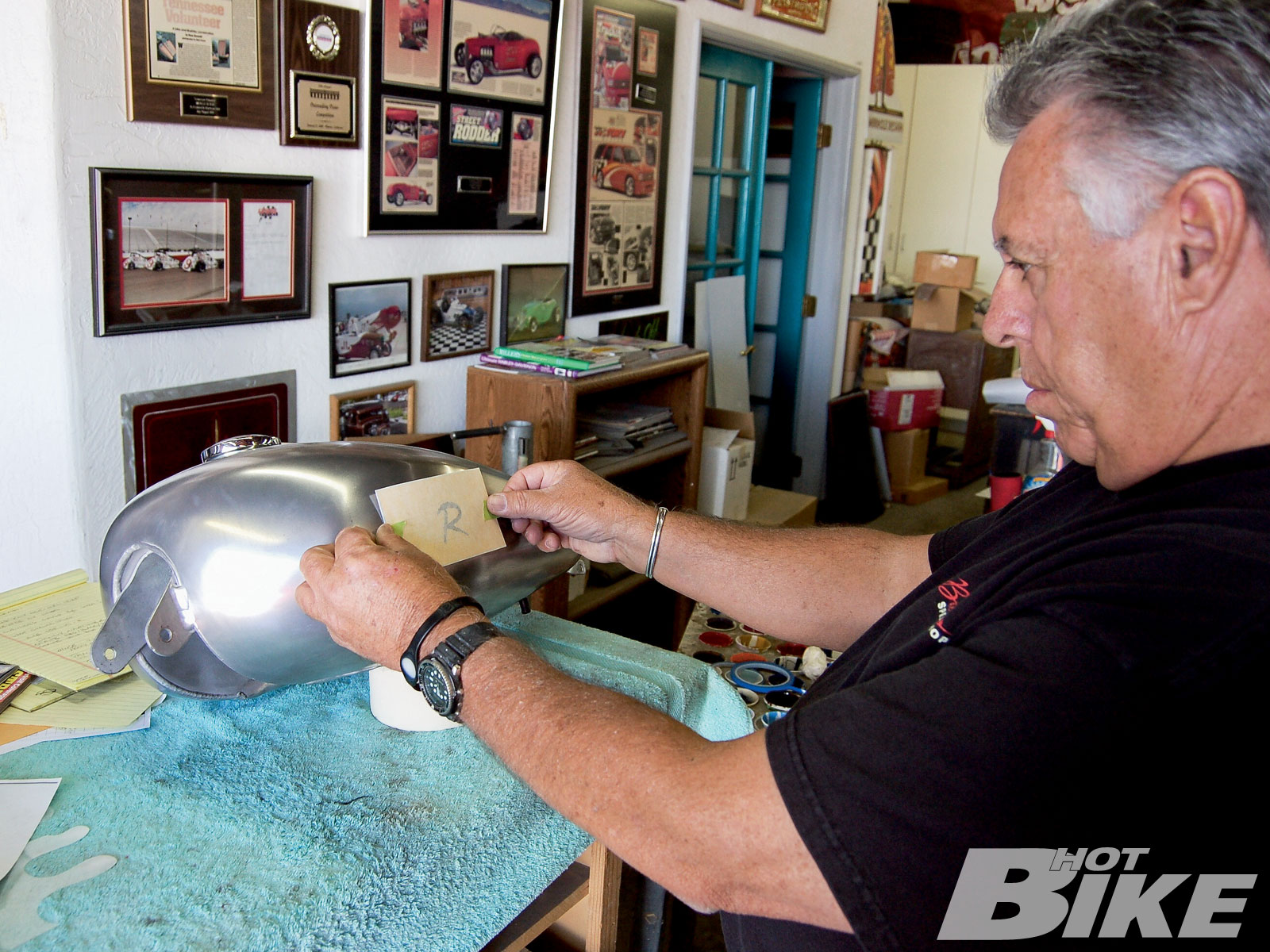 10. Phil Whetstone sized some sample graphics that we considered to dress up the “alloy” gas tank. 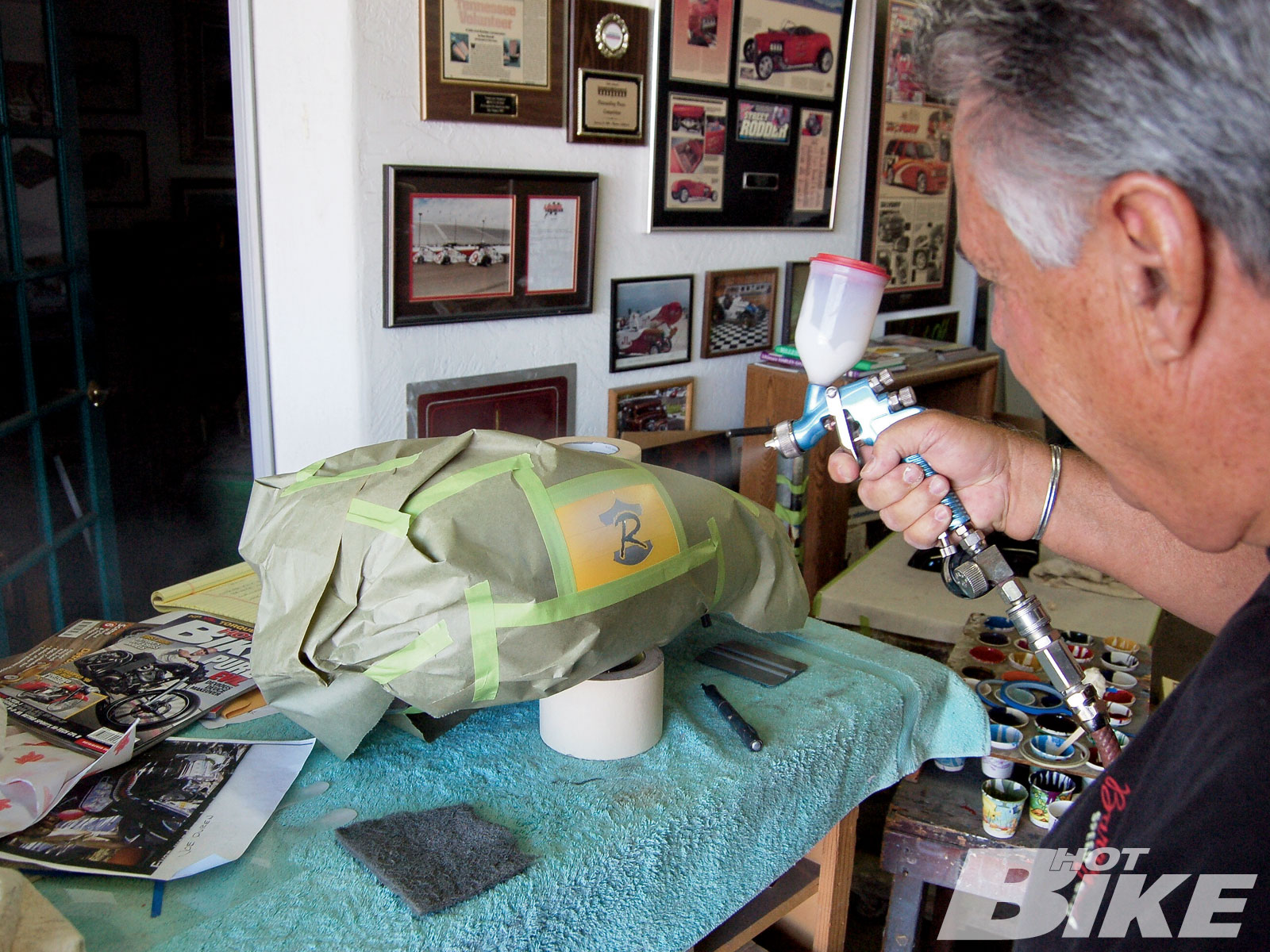 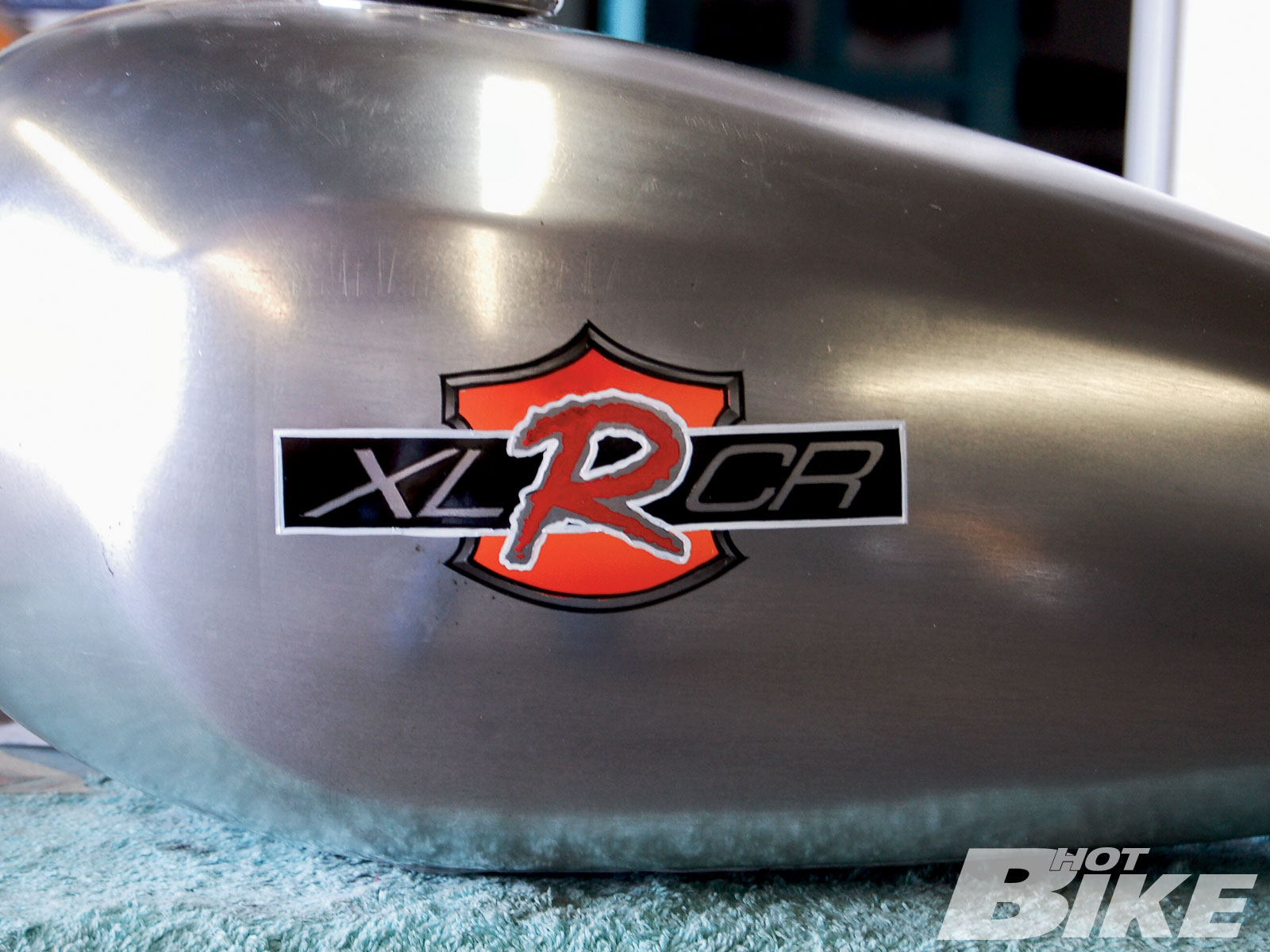 12. Close, but no cigar. This graphic looked good on paper, but after Phil applied it, we both decided it wasn’t right. See what we came up with next issue. 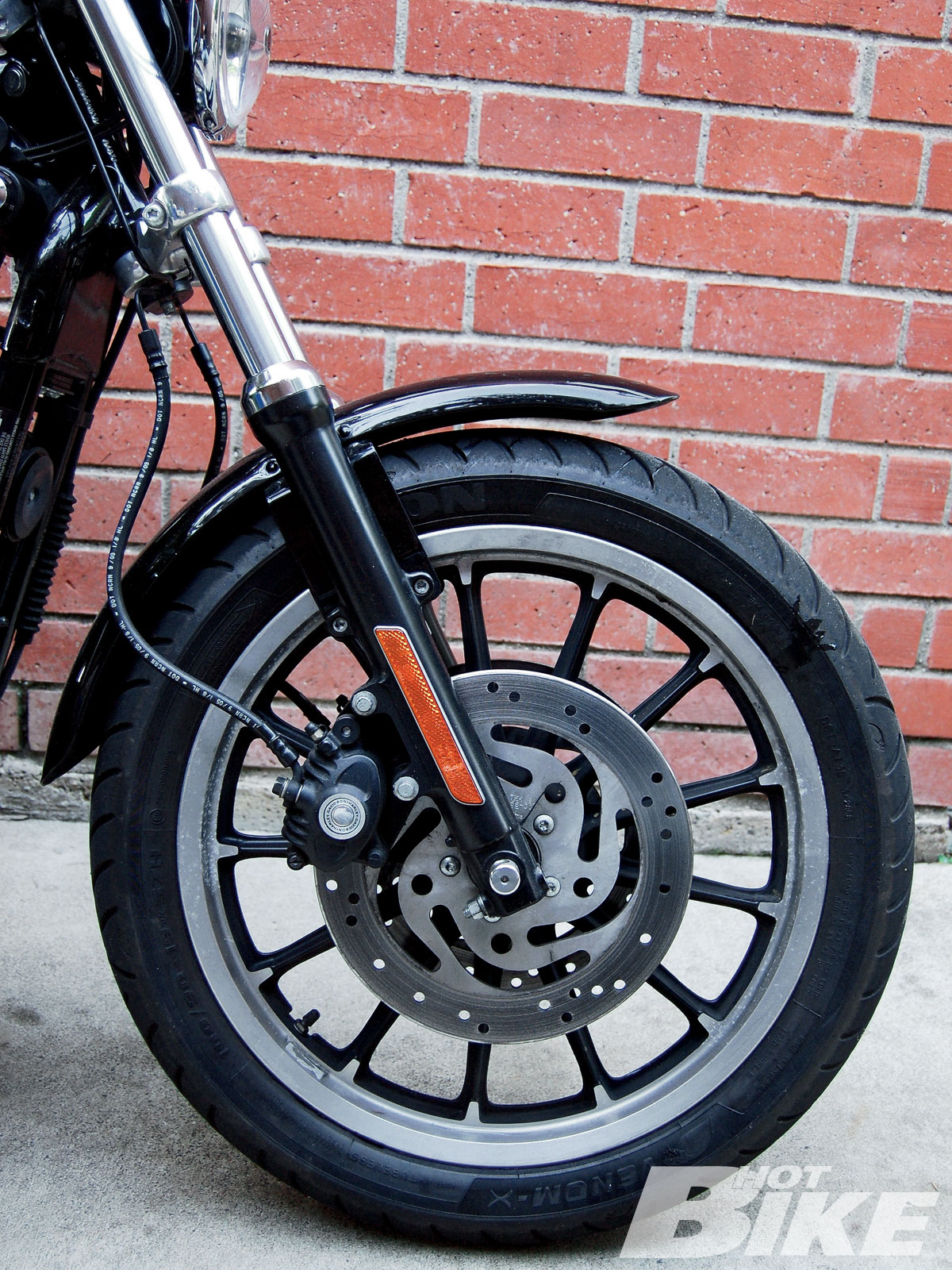 13. Stock Harley fenders don’t fit tight enough to the tire, so I set out to give XLRCR’s front fender a new fit. 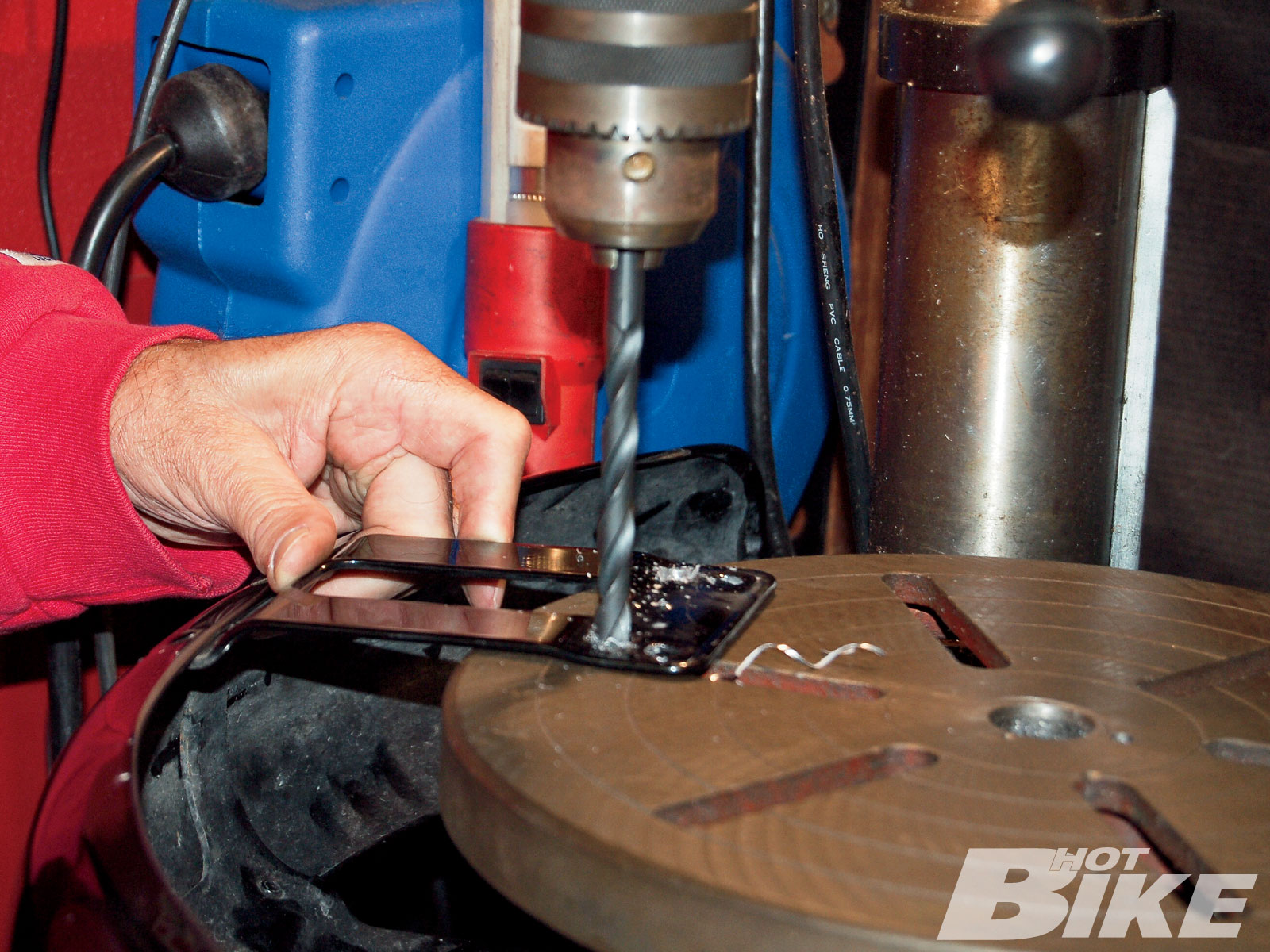 14. After measuring and marking, holes were drilled slightly above the existing fender-mount holes. 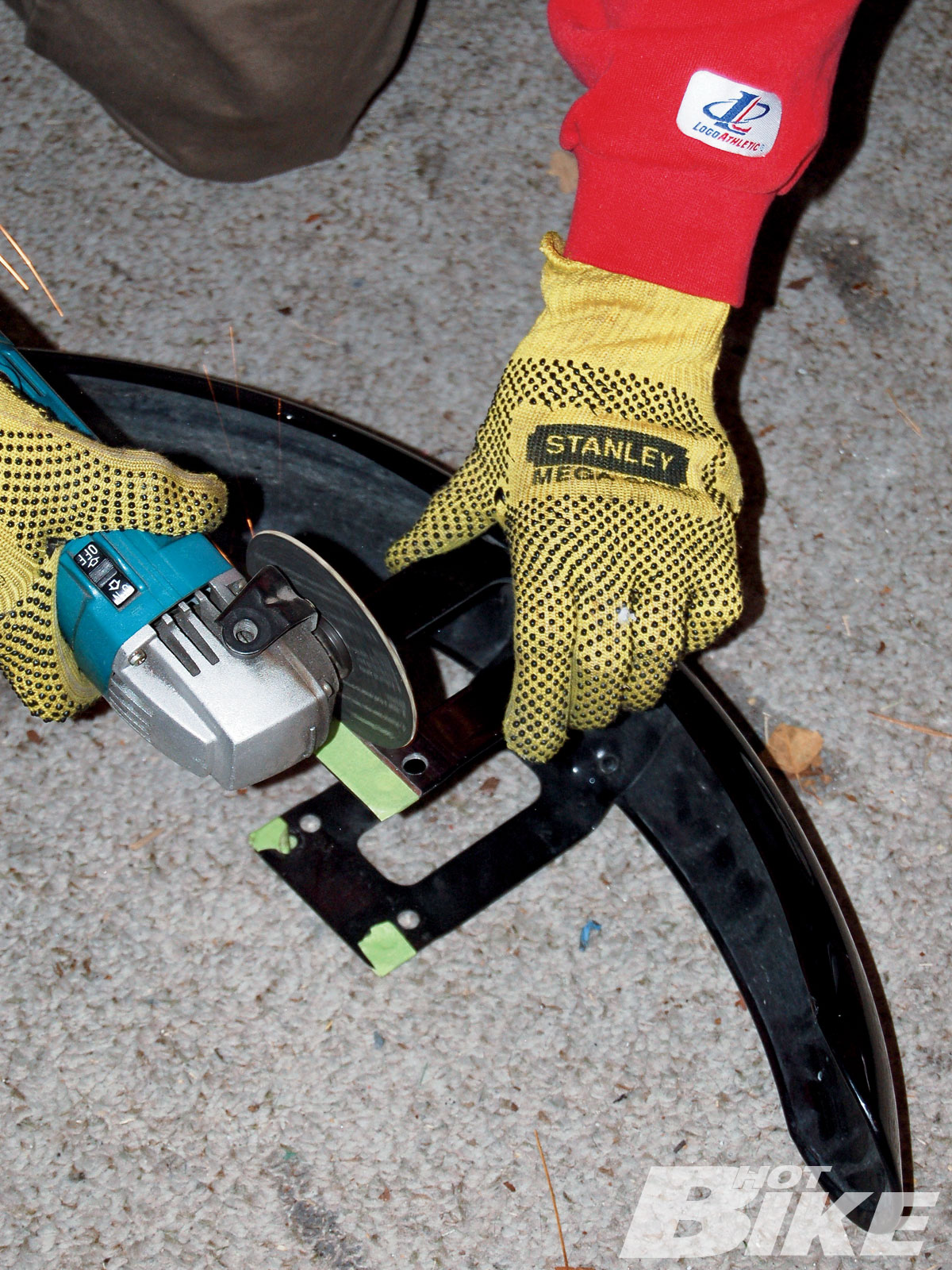 15. A straight line was then drawn between the old holes and the new marks, and the excess metal was cut off and the burrs were ground off before final prep for paint. 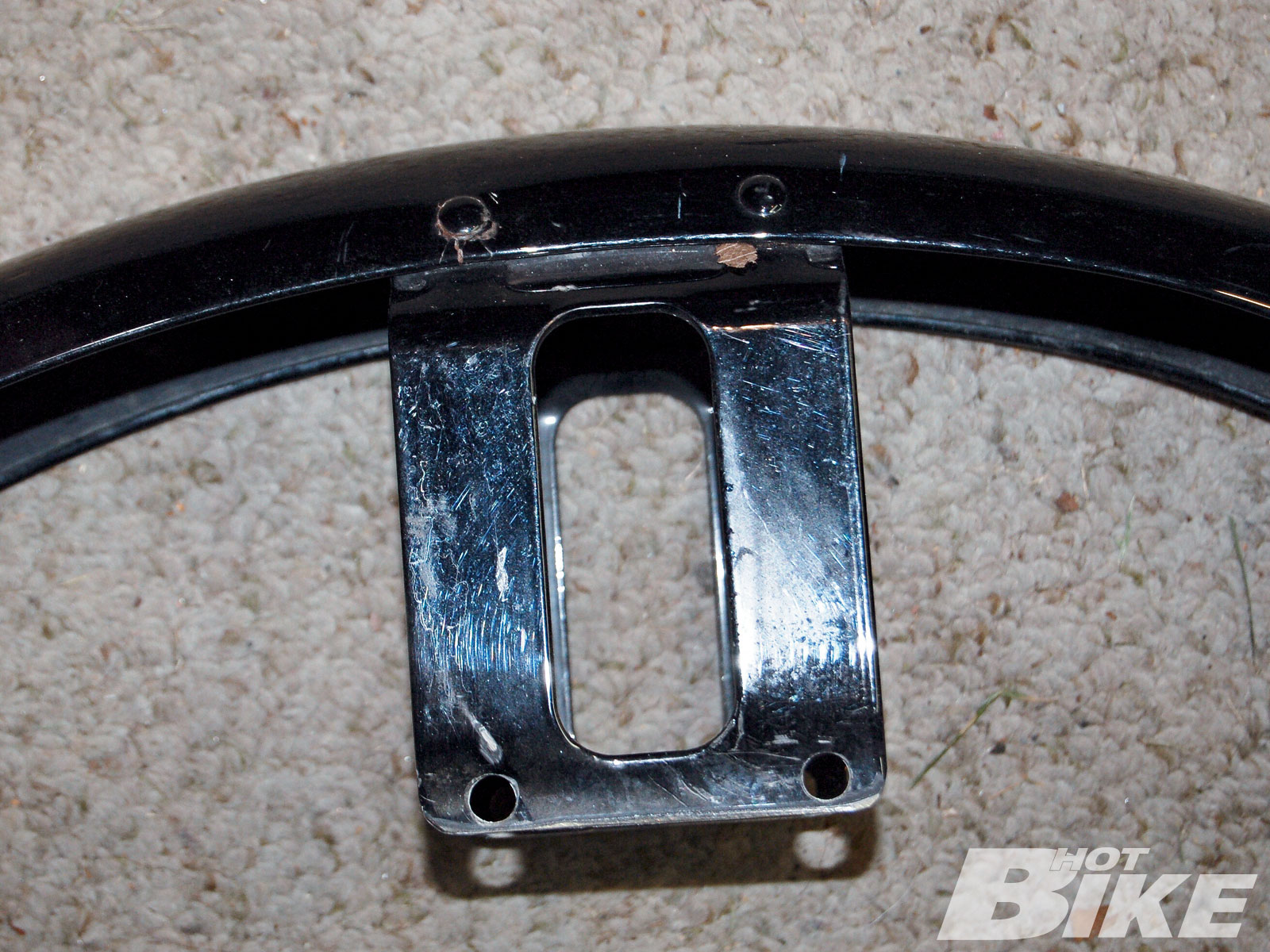 16. The modified section is shorter than original so that the fender will sit closer to the tire for a cleaner look. 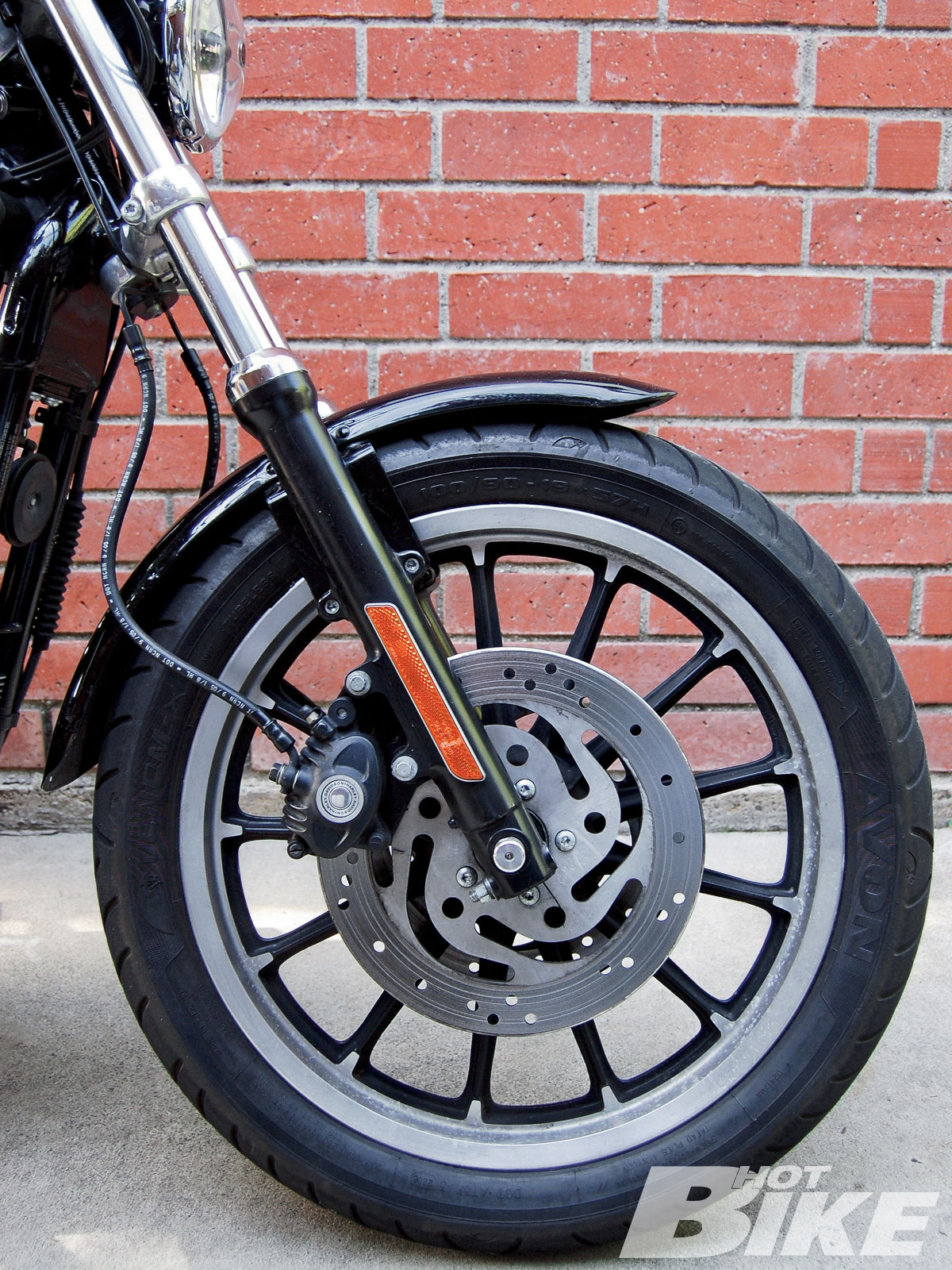 17. Ideally the fender would fit even closer, but the fender’s radius contrasts too much with the tire’s profile. That’s pretty much it for the mods and fabrication. Next issue we’ll show you the final outcome of the XLRCR.

Last issue we launched Project XLRCR, a concept that pays homage to the ’77 XLCR that Willie G. designed. We focused on the XLRCR’s chassis, using new components to improve the ride and handling. And thanks to Patriot Suspension Genesis fork springs, Works Performance Pro Piggyback shocks, and Avon Venom tires, we achieved our goal. Now it’s time to address the bike’s key component: styling.

Because this is a tribute bike to the XLCR, our Y2K edition needs to retain the original spirit of the ’77 model. Retro underlines the theme (and explains the additional R in the name), so our concept must share the same styling DNA as Willie G.’s original. That, of course, means a quarter fairing atop its fork. The solution, as with a majority of the new body ware, was found in Harley-Davidson’s Genuine Motor Parts & Accessories catalog, in this case the Detachable Quarter Fairing Kit (PN 57070-98). The quick-detach feature also helps give the XLRCR a multiple look. When I remove the fairing-an easy enough task-the XLRCR acquires a whole new character. More about this as we get deeper into part two, and when I show you the finished bike next issue.

I’ve always been a fan of alloy gas tanks on café racers, but most of those shiny fuel cells are expensive. However, I figured a way to make a poor man’s alloy tank. For this I selected the XL1200 Custom’s teardrop-shaped gas tank to replace the 883R’s peanut tank. To adapt the tank for the carbureted 883R engine, my friend Tommy Leonardo Jr. fabricated an adaptor plate to seal the big hole required for the Custom’s EFI fuel pump. Another buddy, Brad Von Grote, welded the plate to the tank, and a Pingel petcock regulates fuel to the Keihin carb.

For the gas tank’s faux alloy appearance I called on my friends at H.M. Elliott to see if they could treat the tank’s outer surface with the same aluminized treatment applied to exhaust systems. No problem, they said, and for good measure they gave the 4.5-gallon tank a double dose for extra thickness. The result is a finish that mimics the appearance of alloy.

Satisfied with the aluminized coating, I sent a spare front fender and Nightster belt guard to H.M. Elliott, too. I figured that by removing the detachable fairing, and replacing the painted fender and belt guard with the coated pieces, the bike (hopefully) would take on a whole new appearance. It was part of that multiple styling treatment I referred to in the beginning. You can decide for yourself when you see the final product.

I also wanted to loosen up the bike’s styling in the rear. The bulky XL rear fender had to go. The solution was to mount a Nightster rear fender, taillight combo and side license plate fixture in its place. Result: a less cluttered appearance to XLRCR’s hindquarters.

This cleaner rear fender assembly allows the custom-made Saddlemen café racer seat to especially stand out. Miguel Martinez, one of Saddlemen’s more experienced seat builders, oversaw that part of the project, and he pretty much read my mind in terms of the particular shape I wanted the seat to have.

I enjoyed the same success at Rock & Roll Custom Paintworks when we mapped out the paint scheme. I told Randy Morton that I wanted black with checkered flag graphics. “I want it cool looking, but it also needs to mimic a ‘factory’ paint scheme,” was all I could give for direction, explaining that this custom bike is also a styling exercise to resurrect the XLCR. In short, I didn’t want the paintjob to be too flashy and, in my opinion, what R&R; delivered was spot on.

All that remained for the crew at Lifestyles Cycles was to put it all together. Next issue we’ll show you the fruits of our labor and give a full report on how XLRCR performs.