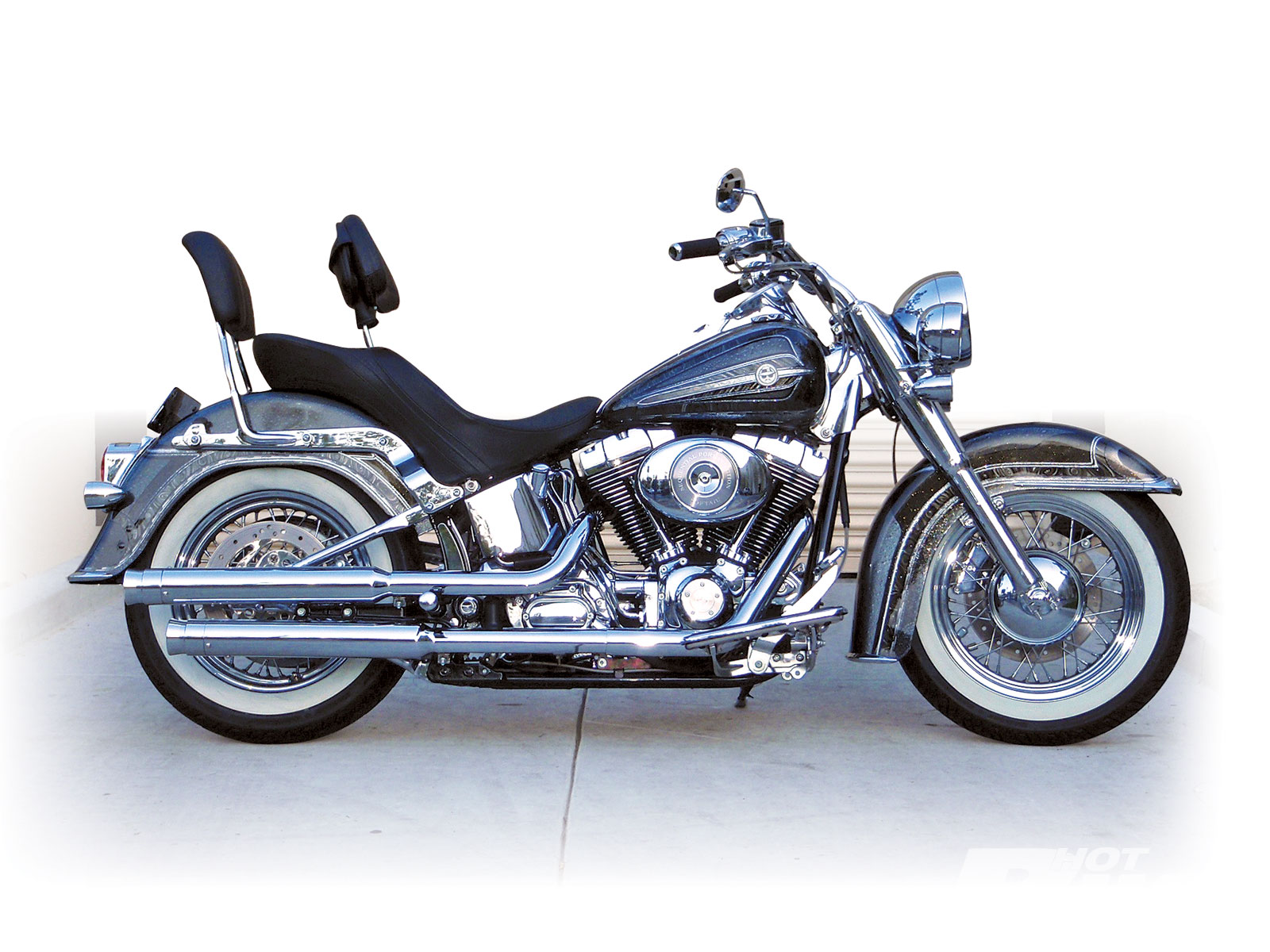 01. Here’s the boss’s bike. It’s an ’05 Deluxe that was used by our sister publication, Lowrider, as a display bike at the various car shows. Aside from a custom paintjob, the bike was pretty much stock before we added a Saddlemen Seat, Rush Mufflers/Tips, and an H-D Sissybar 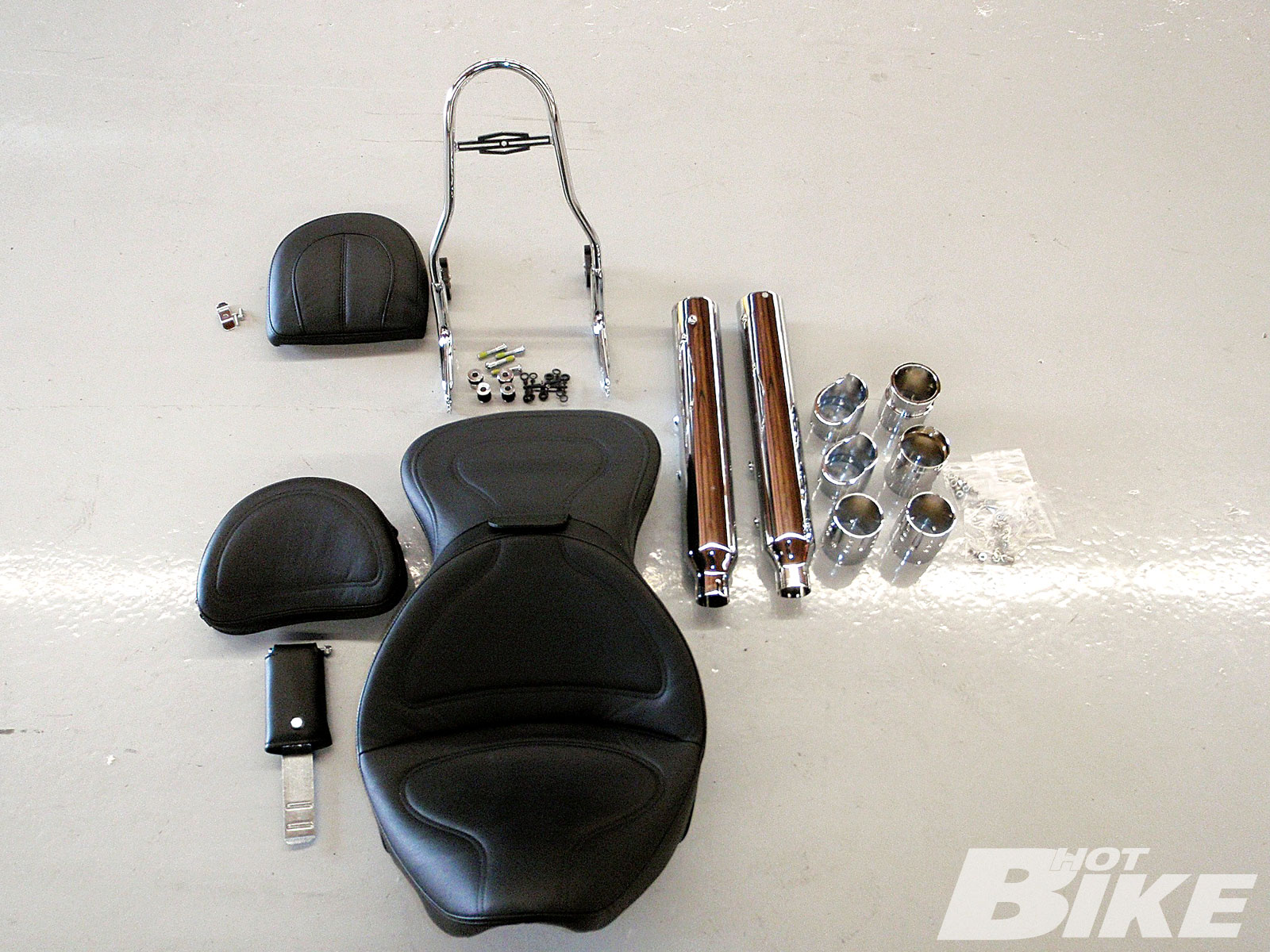 02. Here are all the parts we would be installing. On the right you can see the Rush mufflers. As we mentioned, these are the company’s Tip Compatible mufflers, which allow you to choose from more than a dozen different tip styles to dress up your pipes. The tips go for $59.95 each and come with the mounting hardware. We weren’t sure which our boss would like, so we got our hands on three different styles. 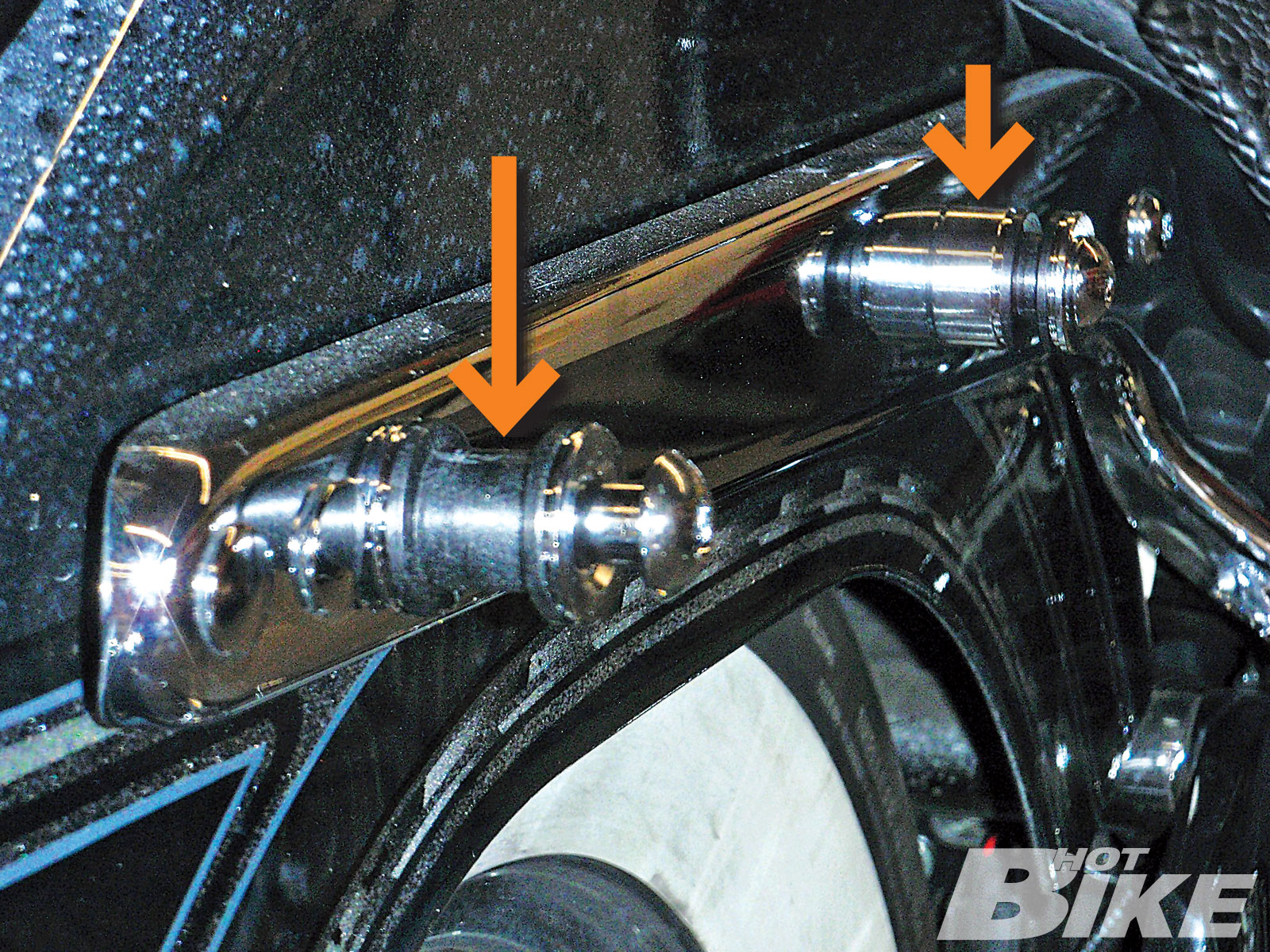 03. We started the swap by removing the two stock rear fender strut bolts on each side of the bike and replaced them with the detachable docking hardware (arrows). The kit comes with bolts that are pre-coated with threadlocker and the bolts are longer than stock to fit through the detachable mounts. 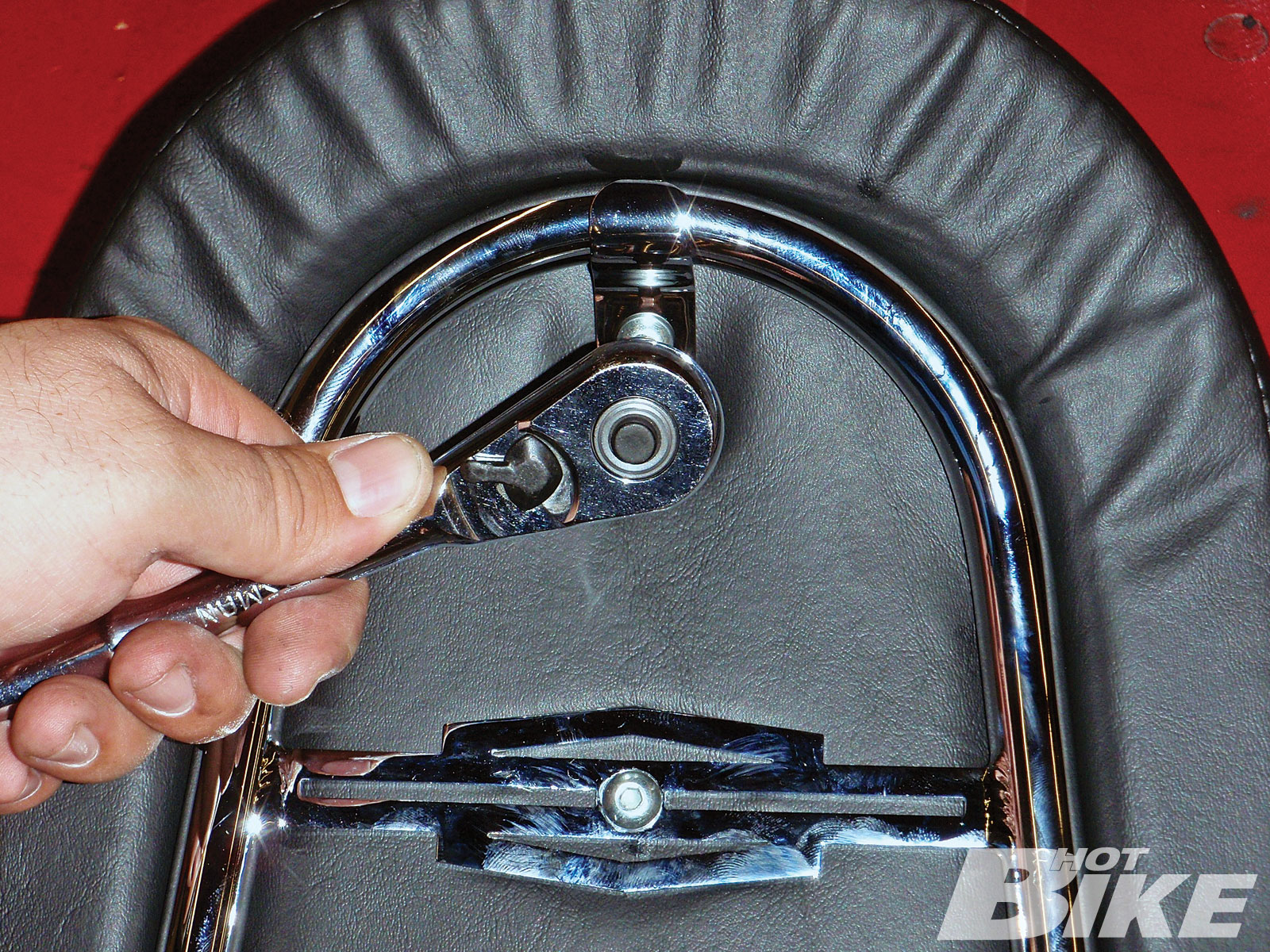 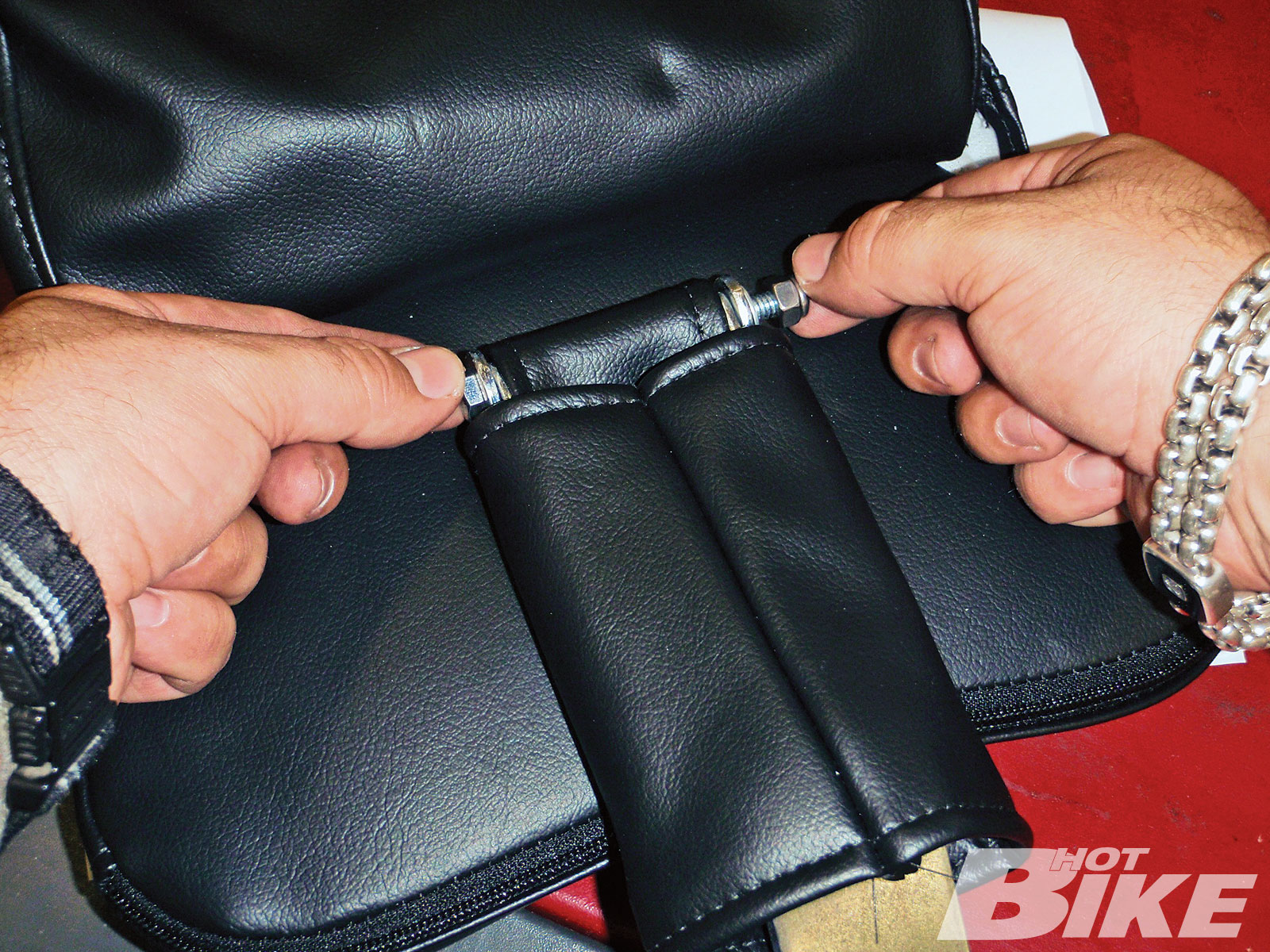 05. The Saddlemen Driver backrest comes in two pieces: the backrest and the mounting bracket. The two were secured together with a bolt through the top of the bracket and the middle of the backrest. 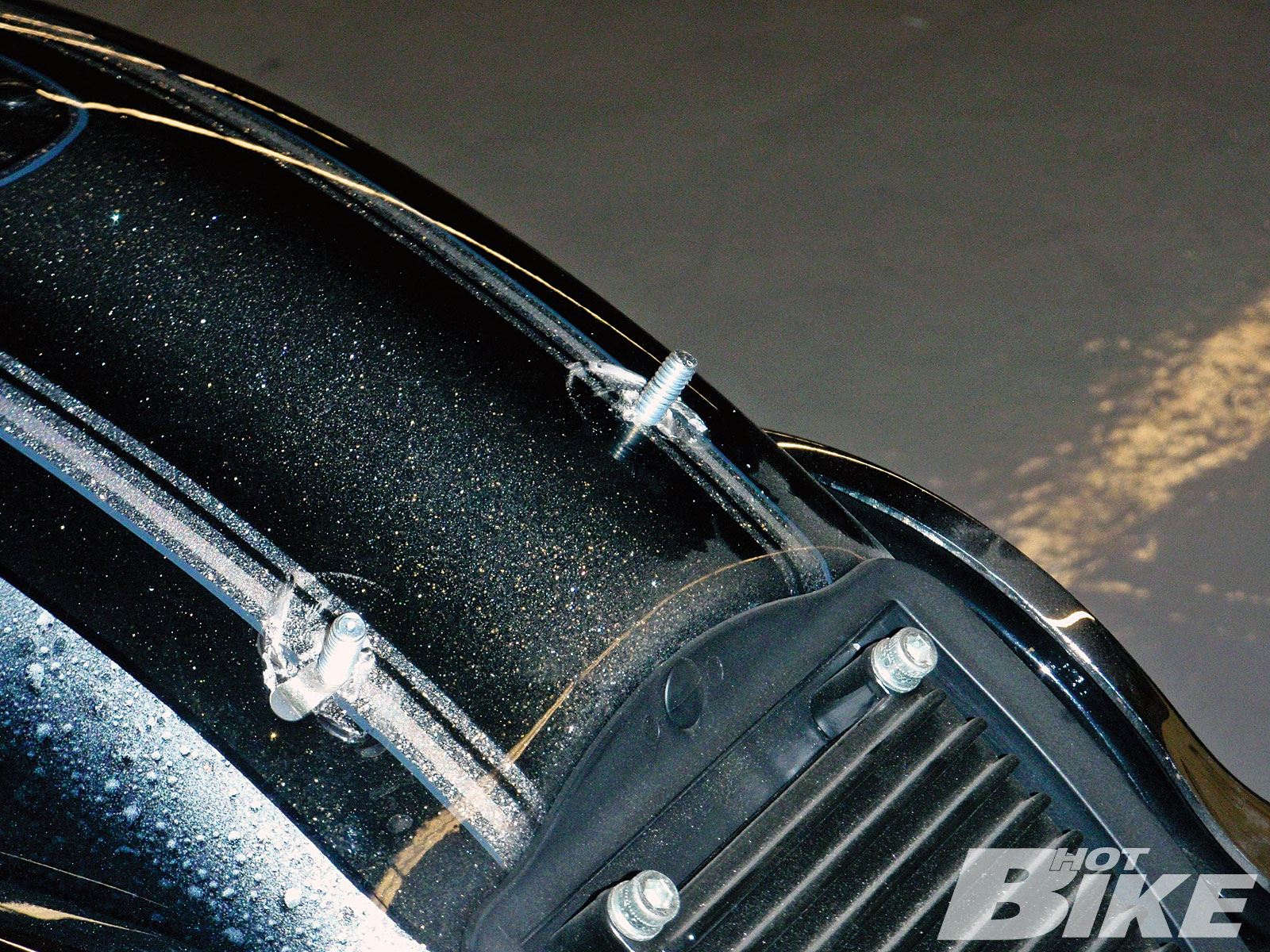 06. Next, we removed the stock seat and the bracket that holds the back of the seat. The rear bracket mounts from underneath the fender and has two bolts sticking up to secure the seat. Needless to say it’s much easier to remove the bracket than install it. 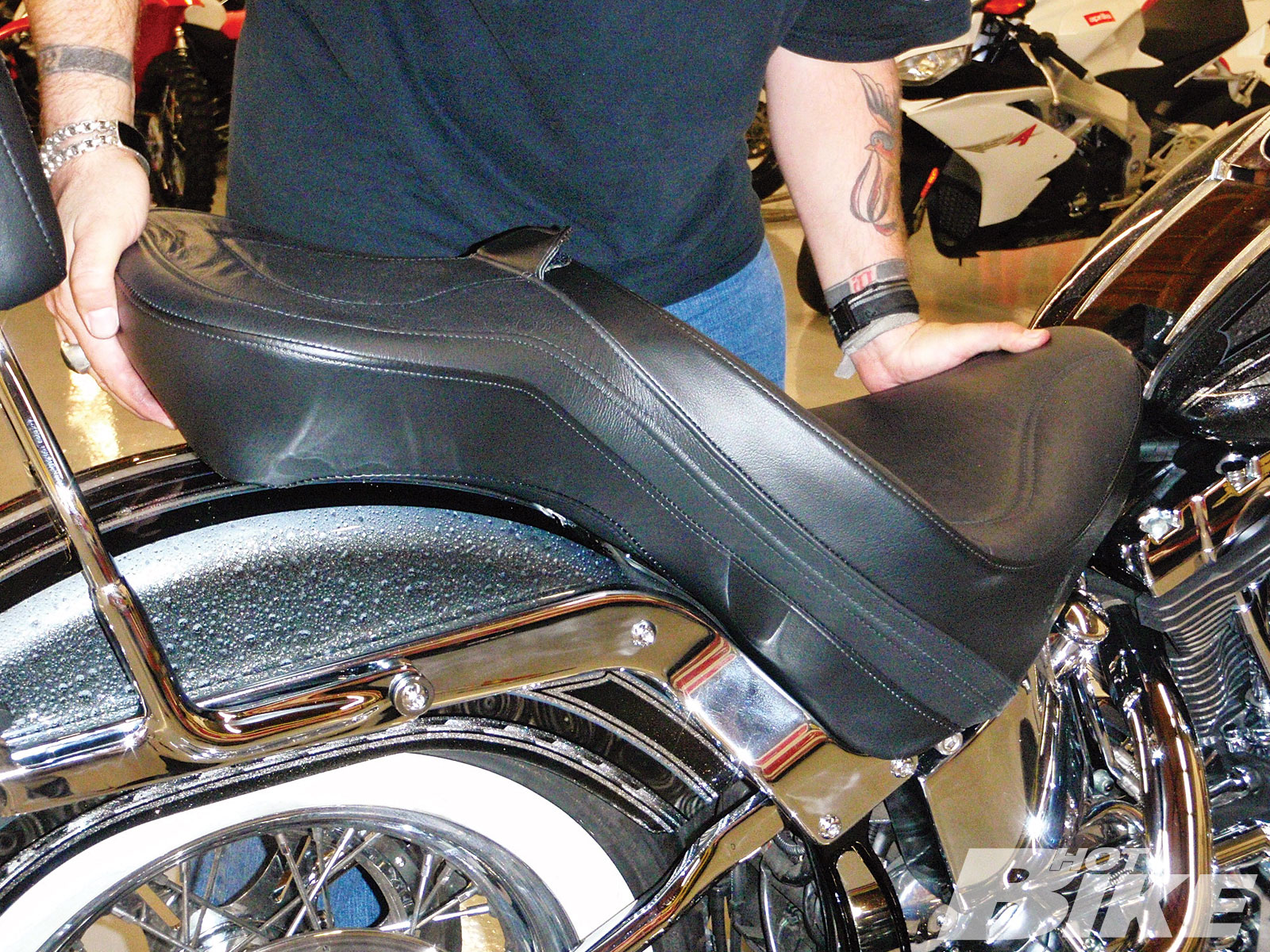 07. We then installed the detachable sissybar, followed by the seat. Saddlemen offers this seat in leather or vinyl. We went with vinyl because it’s easier to maintain (no leather care products needed): just clean with water, it’s more elastic, and will hold it’s shape better over time. The deep, wide bucket seats along with Saddlemen’s progressive density foam and SaddleGel in both seats will provide long-distance comfort. 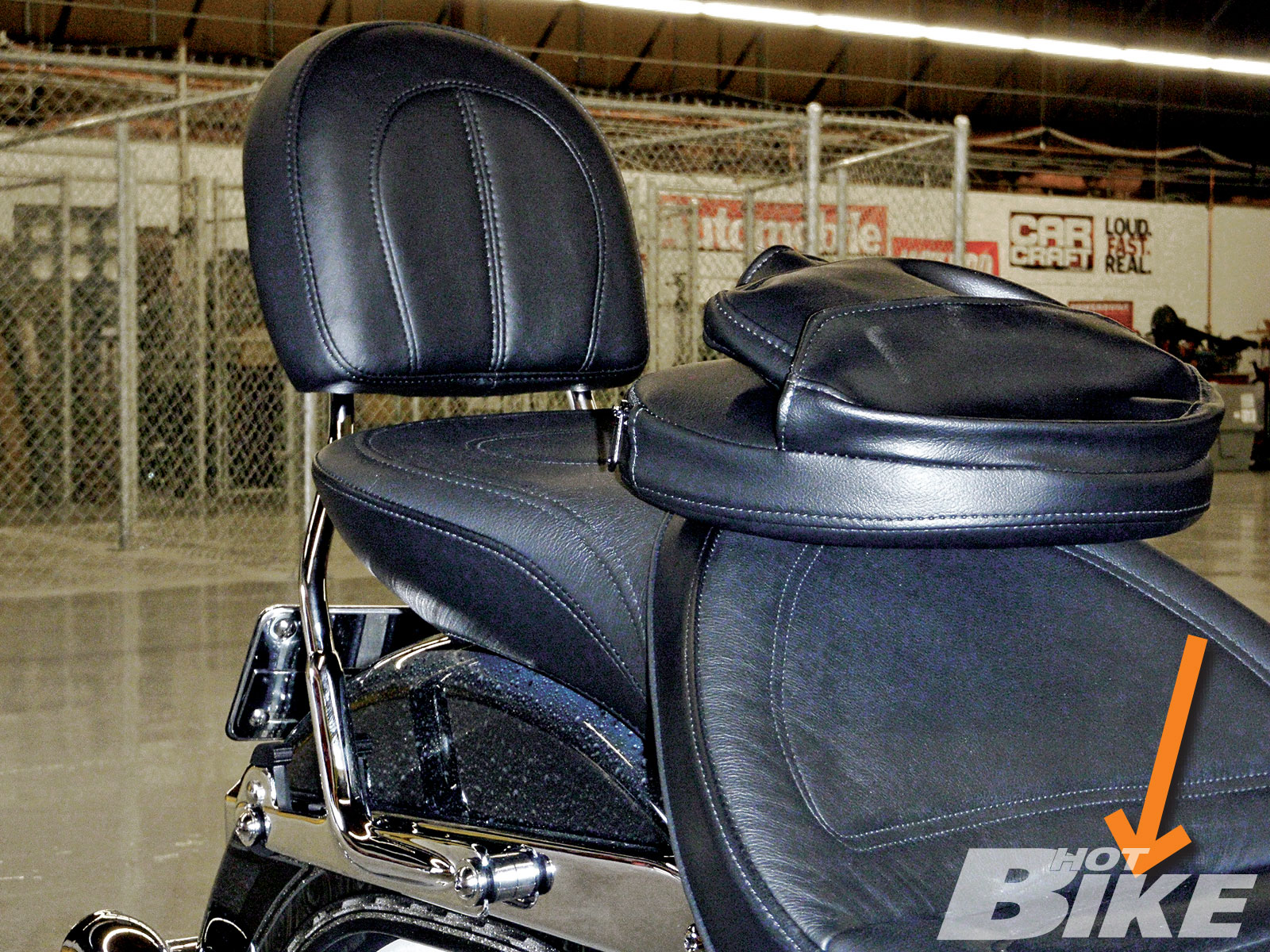 08. The rear of the driver seat has a Velcro flap that covers the mounting slot. The backrest just slides in place and locks in, but can still be easily removed. The backrest can be adjusted to tilt slightly forward or back, and the padded section folds forward so the passenger can get on and off the bike easier. The Explorer has a Split Cushion design in the driver seat (arrow), which according to Saddlemen, separates the seat surface from the lumbar support eliminating the “hammock effect” by conventional seating and solves the annoying problem of repositioning constantly for a better riding position. 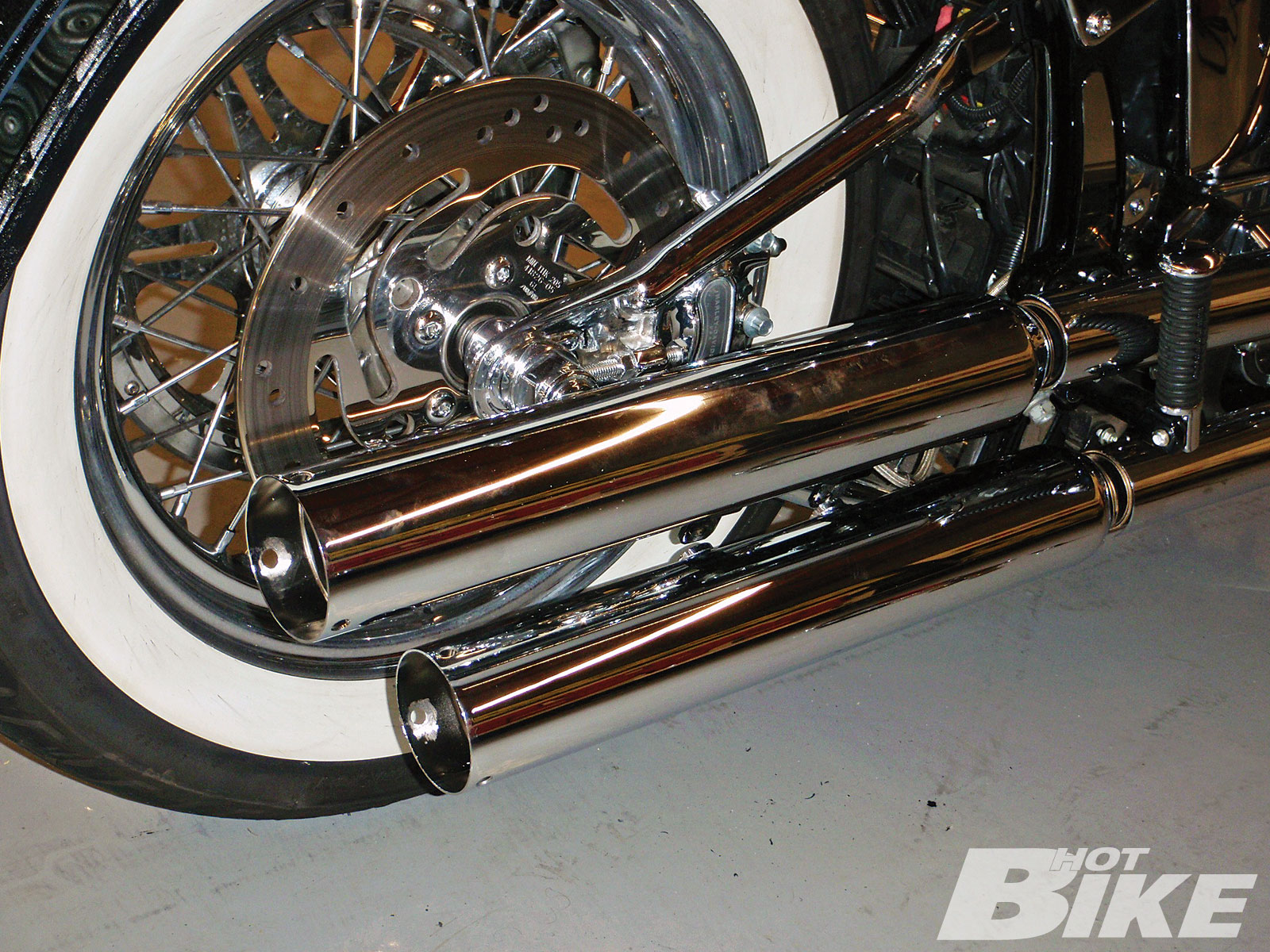 09. Next we installed the Rush mufflers. Rush offers these mufflers in chrome or black with four internal baffle options ranging from 1 1/2 inches to 2 1/4 inches. According to Rush, the sound of the 1 3/4 baffle is slightly above stock and the 2 1/4 baffle is its most aggressive and deepest/throatiest, but not as loud as straight pipes. We went with Rush’s suggestion of the 2-inch which is a good overall baffle with a nice mellow tone. 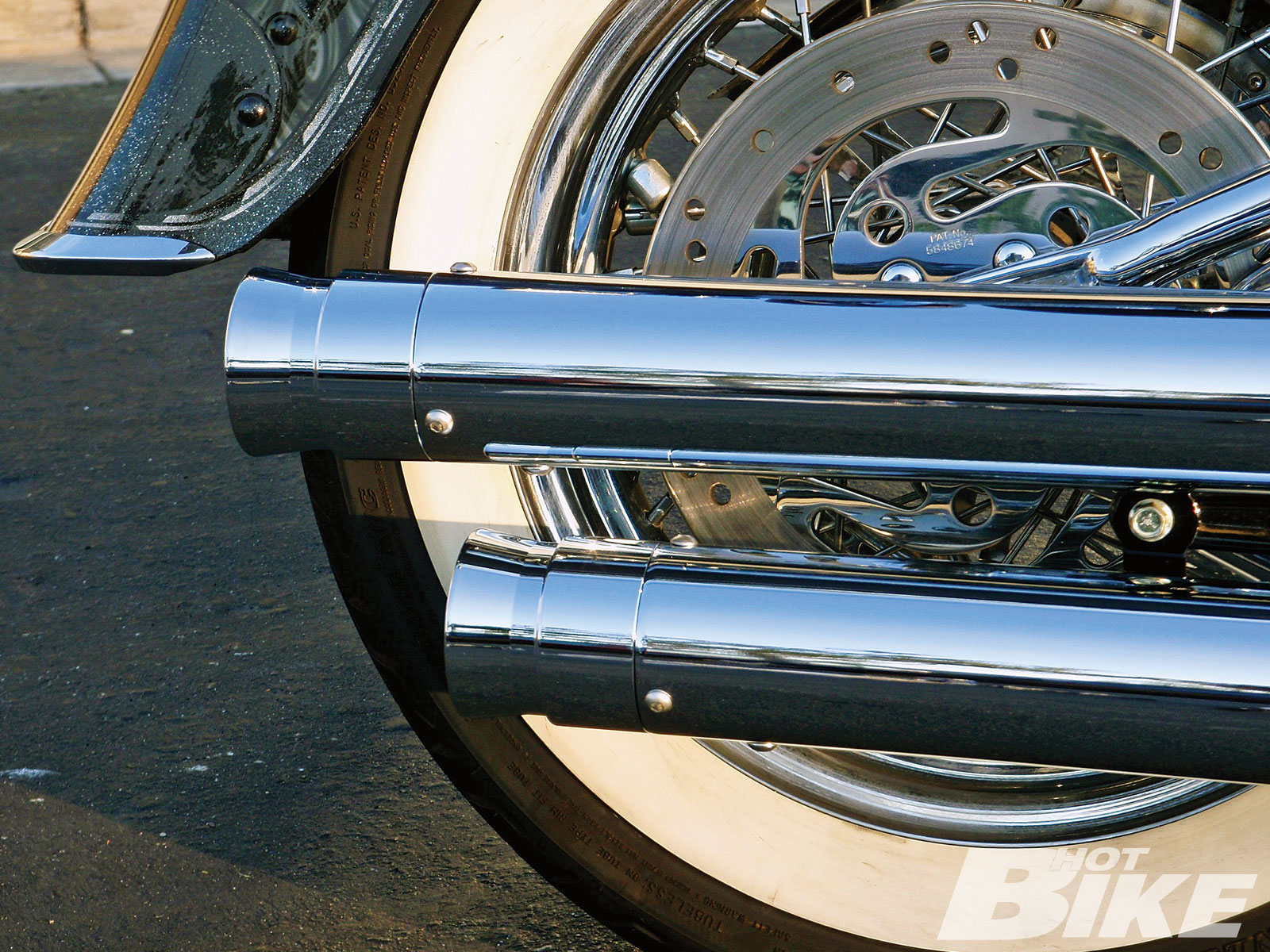 10. We then installed each tip to see which the bossman liked best. We started with the Flared End with Solid Band. 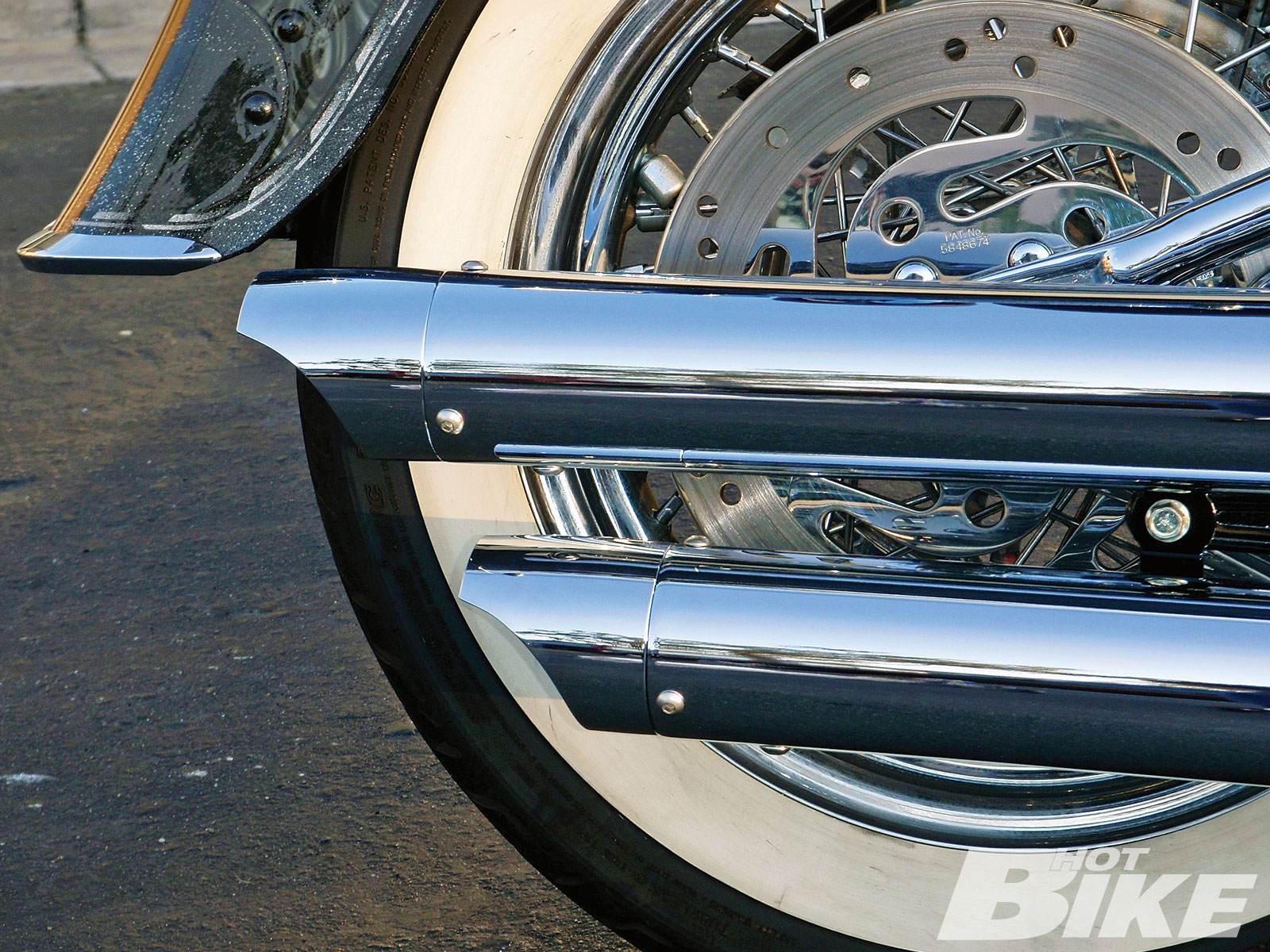 11. Followed by the Visor. This tip has various mounting options, so the visor can be mounted (up as seen here), sideways, or down. 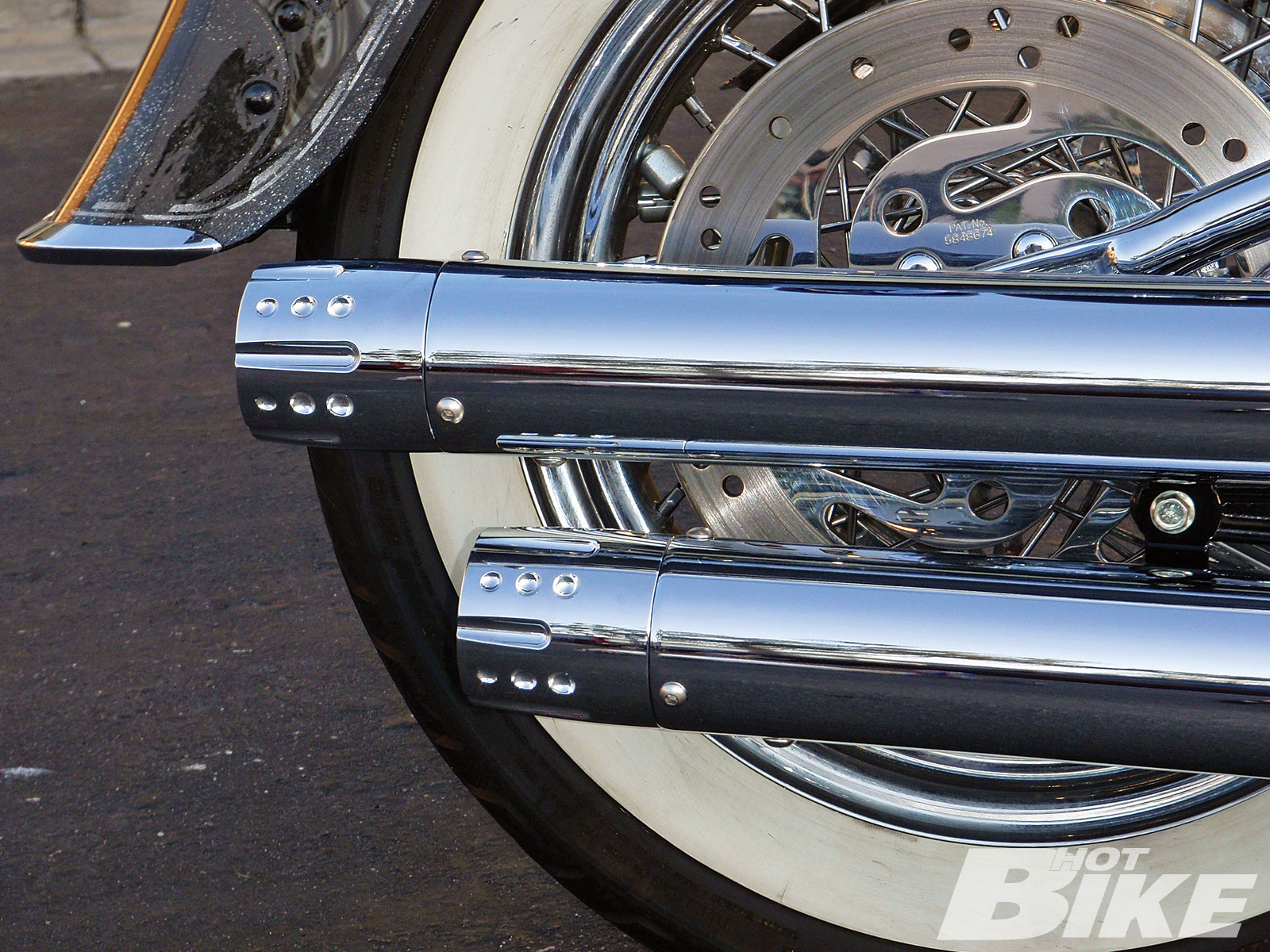 12. Lastly we installed the Tapered with Alternating Horizontal Grooves and Dimples. 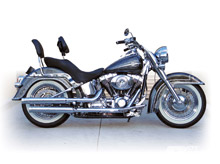 13. The boss liked the Flared tips. As you can see, now he’s ready to hit the long coastal stretches of SoCal with his gal. He’ll be riding in comfort and with a little more bark. As for whether we came out heroes or zeros? Well, so far we’re still here. To get an idea of what the mufflers sound like check out hotbikeweb.com.

Swap
Remember the old saying “When E.F. Hutton talks, people listen”? Well, around our offices, it’s “When the big wigs talk, people listen.” And a few months back one of our higher-ups mentioned he was looking for a couple things for a Softail Deluxe he’d just bought. In particular he was interested in a two-up seat (the original passenger pad that came on the Deluxe was nowhere to be found), a sissybar/backrest for his better half, and he wasn’t happy with the puttsy sound coming out of the stock pipes.

We quickly stepped up to the plate and made a suggestion on some parts. The first of which was a Saddlemen Explorer Seat with Driver Backrest ($639.95), a Harley One-Piece Detachable Sissybar Upright ($259.95) Tall Backrest Pad with Softail Deluxe Pattern ($79.95), and the detachable Docking hardware ($39.95). For a deeper and more powerful sound, we suggested a set of Rush Racing Products’ Tip Compatible Slip On Mufflers ($335.95).

We suggested these parts because we knew everything was reasonably priced, quick and easy to install, and provided the looks, sound, and comfort he wanted. Next, came the make-it-or-break-it line, it was our job to install everything. If we could install everything with no issues or scratching his paint, and he liked the set up, we’d be heroes. Screw up his bike or he hates everything we installed, and we’re zeros. No pressure, right?