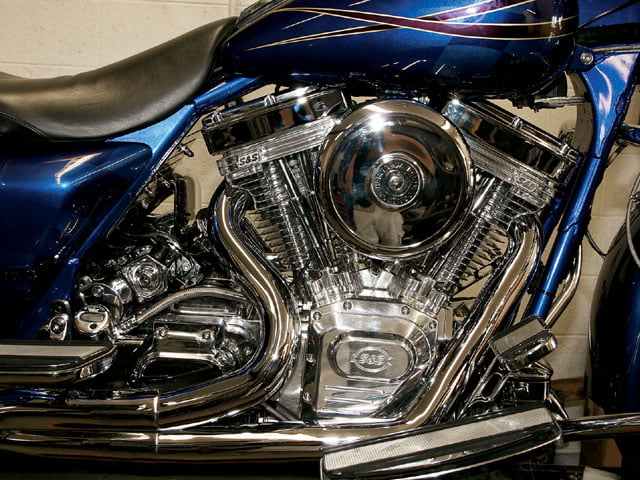 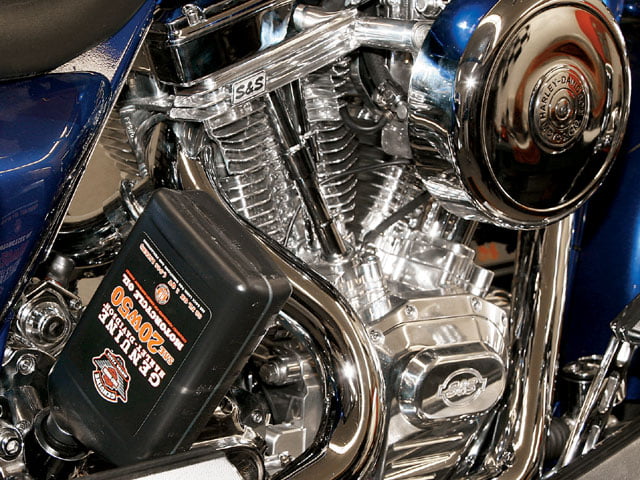 2. The oil tank is topped off with break-in oil during pre-start procedures. Despite differences of opinions about using a petroleum- or synthetic-based oil during engine break-in, one fact cannot be denied: Petroleum-based oil is much more economical to use than synthetic. Petroleum-based oil is also highly conducive to the break-in process, since the objective is to gently wear in parts to achieve proper mating. 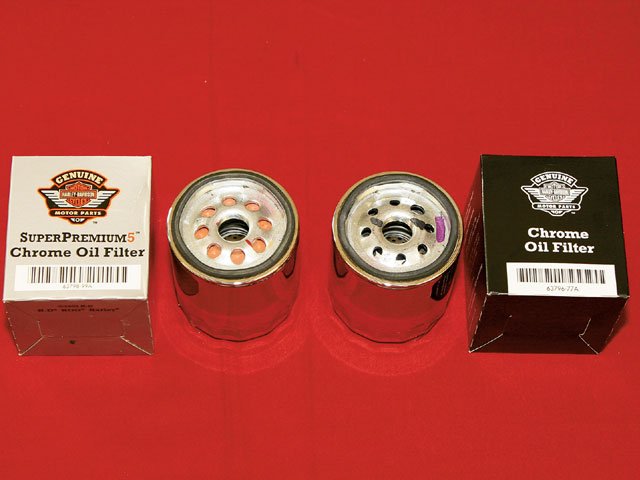 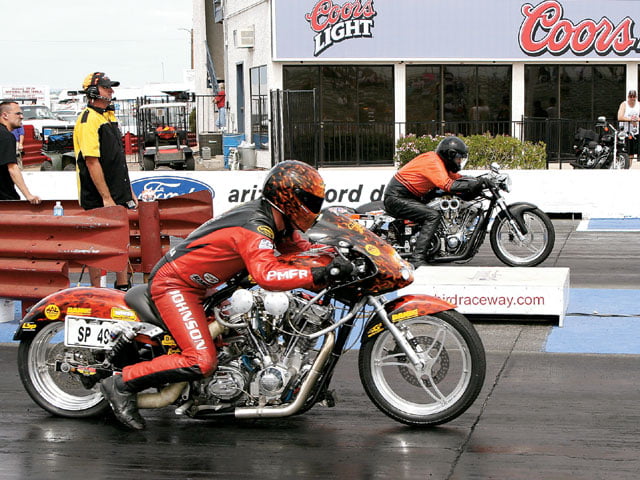 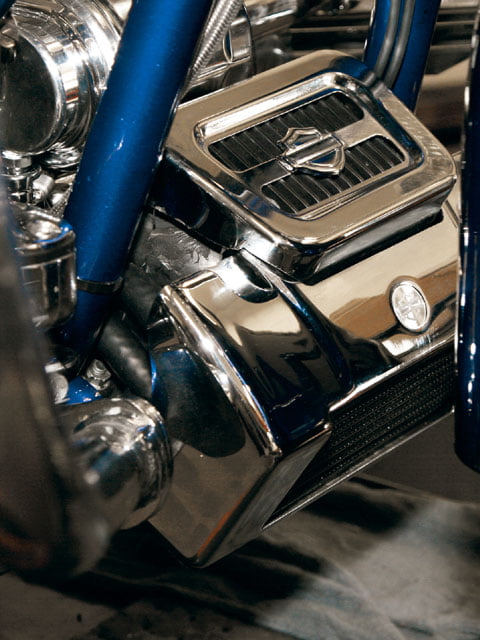 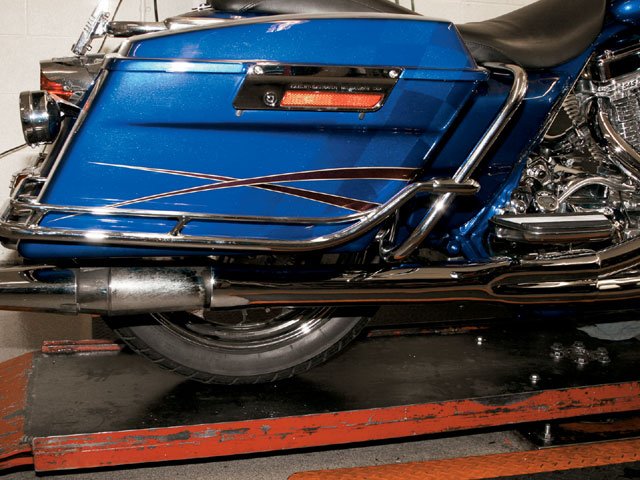 In last month’s issue of HOT BIKE, we discussed the critical importance of engine break-in and highlighted procedures that should be followed. For this month’s installment, we asked five major companies (one motorcycle manufacturer, three aftermarket engine suppliers, and one high-performance engine builder) to provide their insight into the clouded world of engine break-in. Although engine break-in procedures between manufacturers are similar, routines do vary. Each manufacturer has its own preferred techniques, philosophies, and methods for breaking in an engine. The following is a summary of what we were told. For additional information, refer to the manufacturer’s owner’s manual for the specific engine model.

Harley-Davidson not only builds complete motorcycles, it also sells complete remanufactured and new engines. When buying a new motorcycle from the factory, break-in procedures normally begin with the run-in phase. However, when buying a new or remanufactured engine not installed by an authorized dealership or professional shop, all four phases of break-in will be your responsibility. Keep in mind, however, that H-D factory technicians run the engine for a short time before shipping.

H-D recommends a 500-mile break-in period for all its motorcycle models and engine designs, including remanufactured and new engines. Engine oil and filter should be changed at 1,000 miles, 5,000 miles, and every 5,000 miles thereafter.

Pre-Start
When installing an H-D remanufactured or new engine, verify that the engine’s oil tank and all oil lines are clean of debris.

Initial Start-Up
All H-D engines, including those shipped with new motorcycles or purchased through a remanufactured or new-engine program, are “hot tested” (started up and checked out) by factory technicians before being shipped.

Run-In
During the first 50 miles, keep engine rpm below 4,000 (5,000 rpm for the V-Rod) in any gear. Do not lug the engine by running or accelerating at very low rpm, or operating at high rpm longer than needed for shifting or passing.

Up to 500 miles, vary engine speed and avoid operating at a steady engine speed for long periods. Engine speed up to 5,000 rpm (7,000 rpm for the V-Rod) in any gear is acceptable.

Drive slowly and avoid fast starts at wide-open throttle until the engine has warmed up. Avoid lugging the engine (running it at very low speeds in higher gears).

Follow-Up
Follow-up procedures are performed by an H-D dealer during the 1,000-mile Regular Service Interval maintenance.

Kendall Johnson Customs builds custom one-off motorcycles, one of which was featured on the Discovery Channel’s Great Biker Build-Off. The company also specializes in building large-displacement, high-horsepower street and racing engines. Kendall and his family also race gas-powered Harleys in the All Harley Drag Racing Association (AHDRA). Some of KJC’s bikes run in the 8-second bracket at more than 150 mph in the quarter-mile.

KJC engines, both street and race, are fabricated one at a time to precise hand-fitted tolerances, so break-in procedures vary slightly from other manufacturers. Kendall’s process includes several heat cycles and 100 break-in miles. The engine’s oil and filter are changed after 100 miles. Then the engine is good to go.

A high-quality 20W-50 petroleum-based oil is recommended during the first 1,000 miles. Either petroleum- or synthetic-based oil can be used after 1,000 miles. Recommended oil-change intervals after break-in are every 2,000 to 3,000 miles. Keep in mind that KJC does not recommend its break-in procedures for engines built to production-line tolerances.

Pre-Start
Prime the engine’s oiling system before start-up. Customers buying an assembled KJC engine must flush the engine’s oil tank and oil lines of all debris and verify that oil lines are connected properly before priming the engine.

Initial Start-Up
Once the engine is fired up, oil pressure and oil return to the tank are verified. Checks are also made for oil and fuel leaks and any abnormal sounds. The engine is run for one or two minutes until the cylinders become warm to the touch. The engine is then shut off and allowed to cool. This heat-cycling sequence is then repeated four more times (five total). The engine is now ready for the run-in phase.

RevTech recommends a 2,000-mile break-in period for all its engines using high-quality non-synthetic motorcycle oil. During the break-in period, oil and filter changes are recommended at 50, 500 and 2,000 miles, and at least every 3,500 miles thereafter.

Pre-Start
Pre-start procedures require prepping the oil tank before installing a new RevTech engine. Procedures include draining and flushing the tank and all oil lines. Ignition timing and carburetor jetting also must be set for the specific engine and application.

Run-In
For the first 50 miles of run-in, avoid engine speeds above 4,500 rpm and below 2,500 rpm to properly seat the pistons and rings. Always warm the engine before riding, vary engine rpm, and do not lug the engine in any gear. Change oil and filter at 50 miles.

From 50 to 500 miles, limit engine speed to 4,500 rpm. Do not subject the engine to hard acceleration or lug the engine, especially in higher gears. Change oil and filter at 500 miles.

Between 500 and 2,000 miles there is no rpm limit, but vary engine speeds and avoid hard acceleration and lugging the engine. Change the oil and filter at 2,000 miles.

S&S; offers complete assembled and unassembled Twin Cam-, Evo-, Shovel-, XL-, and Buell-style engines from stock displacement to 124ci and larger. Some models are available in both carbureted and fuel-injected versions.

S&S; recommends a 1,000-mile break-in period but leaves the type of engine oil used up to the owner. Use oil designated for an air-cooled engine and the recommended viscosity for ambient temperatures. During the break-in period, oil and filter changes are recommended at 50, 500, and 1,000 miles, then again at 2,000 miles and every 2,500 miles thereafter. After break-in, S&S; endorses using Mobil 1 V-Twin 20W-50 synthetic oil.

Pre-Start
Pre-start procedures include verifying that the oil tank and all oil lines are clean of debris.

Initial Start-Up
At initial start-up, run the engine approximately one minute at 1,250-1,750 rpm, and do not whack the throttle open or subject the engine to any loads. During this time, check for normal oil pressure, that oil is returning to the oil tank, that no oil or fuel leaks exist, and for any abnormal sounds. Shut off the engine after one minute and check thoroughly for any leaks or problems. Allow the engine to cool to the touch.

After the engine has cooled, restart it and run it for two to four minutes. When the cylinders become warm to the touch (approximately 150 degrees F), shut off the engine and let it cool to room temperature. Repeat the same checklist as during the initial start-up and continue to monitor for problems.

Repeat the previous heat-cycling procedures three or four more times. During each successive heat cycle, the engine should take slightly longer to warm up because friction is reducing. Engine temperature can be increased about 10 degrees F during each heat cycle. Engine rpm should be varied and slightly increased a little more beyond 1,750 rpm for each cycle. During the final heat cycle, vary rpm from idle to 2,500 rpm. The engine should not reach full operating temperature during the heat-cycling process. When the motor has cooled to room temperature after the final heat cycle, the engine is ready for the 1,000-mile run-in process.

Run-In
For the first 50 break-in miles, keep engine speed below 2,500 rpm, vary rpm, and do not lug the motor. Change engine oil and filter at 50 miles.

From 50 to 500 miles, keep engine rpm below 3,500 rpm, again varying engine speed while not lugging the motor. Change engine oil and filter at 500 miles.

Between 500 and 1,000 miles, ride the motorcycle in a normal but conservative manner. Engine rpm can be more liberal, and the motorcycle can be ridden at normal highway speeds. Avoid a continuous steady engine speed, and do not lug or stress the engine: no burnouts, dyno runs, hard acceleration, trailer towing, or sidecar operation.

At 1,000 miles, check the ignition timing and carburetor settings, and change the engine oil and filter as well. The break-in period is now complete. S&S; also recommends another oil and filter change at 2,000 miles and then every 2,500 miles thereafter.

Ultima Performance recommends a 500-mile engine break-in period. The engine’s oil and filter should be changed between the first 50 and 100 miles, at 500 miles, and between 1,500 and 2,000 miles. After that, oil and filter changes are recommended at every 3,000 miles maximum if using a petroleum-based oil or every 5,000 miles maximum if using a synthetic-based oil. Ultima only recommends using 40-micron oil filters (not 10-micron) during and after break-in. Ultima also recommends using a high-quality petroleum-based SH- or SJ-rated oil such as Valvoline 20W50 Racing Oil during break-in. After break-in, a synthetic such as Amsoil 20W50 Racing Oil is recommended.

Pre-Start
Pre-start requirements include verifying that the oil tank, oil cooler (if used), and all oil lines are clean of debris. Also, make sure the oil lines are connected properly (not crimped), and install an oil filter. Prime the engine’s oiling system, including hydraulic lifters. Set the carburetion (including accelerator pump) and ignition system to the recommending settings.

Initial Start-UpUse a large fan directed at the engine for cooling. At initial engine start, immediately set the idle to 1,000-1,200 rpm and, if needed, quickly make any necessary idle mixture adjustments. Do not excessively rev or blip the throttle repeatedly. Check for adequate oil pressure, that oil is returning to the oil tank, and that there are no leaks or abnormal sounds. Run the engine for only two minutes, and then shut it off. Repeat the heat cycle three times. For each two-minute run period, run the engine at idle speed for 10 to 15 seconds, then at 2,000 to 2,600 rpm for 10 to 15 seconds. The engine is now ready for the 500-mile run-in.

Run-In
Set engine idle between 900 and 1,100 rpm during the 500-mile run-in period. Do not lug the engine, and keep engine speed between 2,400 and 3,500 rpm. Keep the first two rides short (less than 10 miles), and avoid heavy traffic. Keep the next three to four rides under 30 miles to minimize heat. Vary engine speed and, to minimize high loads on the engine, do not use an overdrive Sixth gear. Take evening rides when the air is cooler, and keep oil temps between 165 and 205 degrees F. Don’t break in the engine at major events or rallies where heavy stop-and-go traffic is unavoidable. Use a minimum of 92-octane fuel and, when possible, do not use ethanol- or alcohol-blended fuels.

Do not dyno-tune the engine until the break-in period is completed. After break-in, redline the engine at 5,500 rpm and, if the ignition system includes a rev limiter, set it to 5,500 rpm. Additionally, optimize the carburetor jetting and ignition advance.

For example, heat is the engine’s major enemy during break-in. The first 10-20 minutes of engine run time are the most critical, followed by the first 50-100 break-in miles. Heat cycling is a common procedure used during initial engine start-up to minimize heat and scoring of the cylinder walls. The induction and ignition systems should be set to the manufacturer’s setting during break-in. When in doubt, a slightly rich air/fuel mixture and slightly retarded ignition advance are the rules for the day.

Be gentle when putting break-in road miles on your engine, minimizing stress, load, and rpm. Be sure to change the engine oil and filter frequently during the break-in period and monitor oil temperatures. If necessary, install an oil cooler and thermostat to control oil temperatures. Finally, do not dyno-tune your engine until the break-in process is complete – then you can let ‘er rip. Ride safely, and have fun!