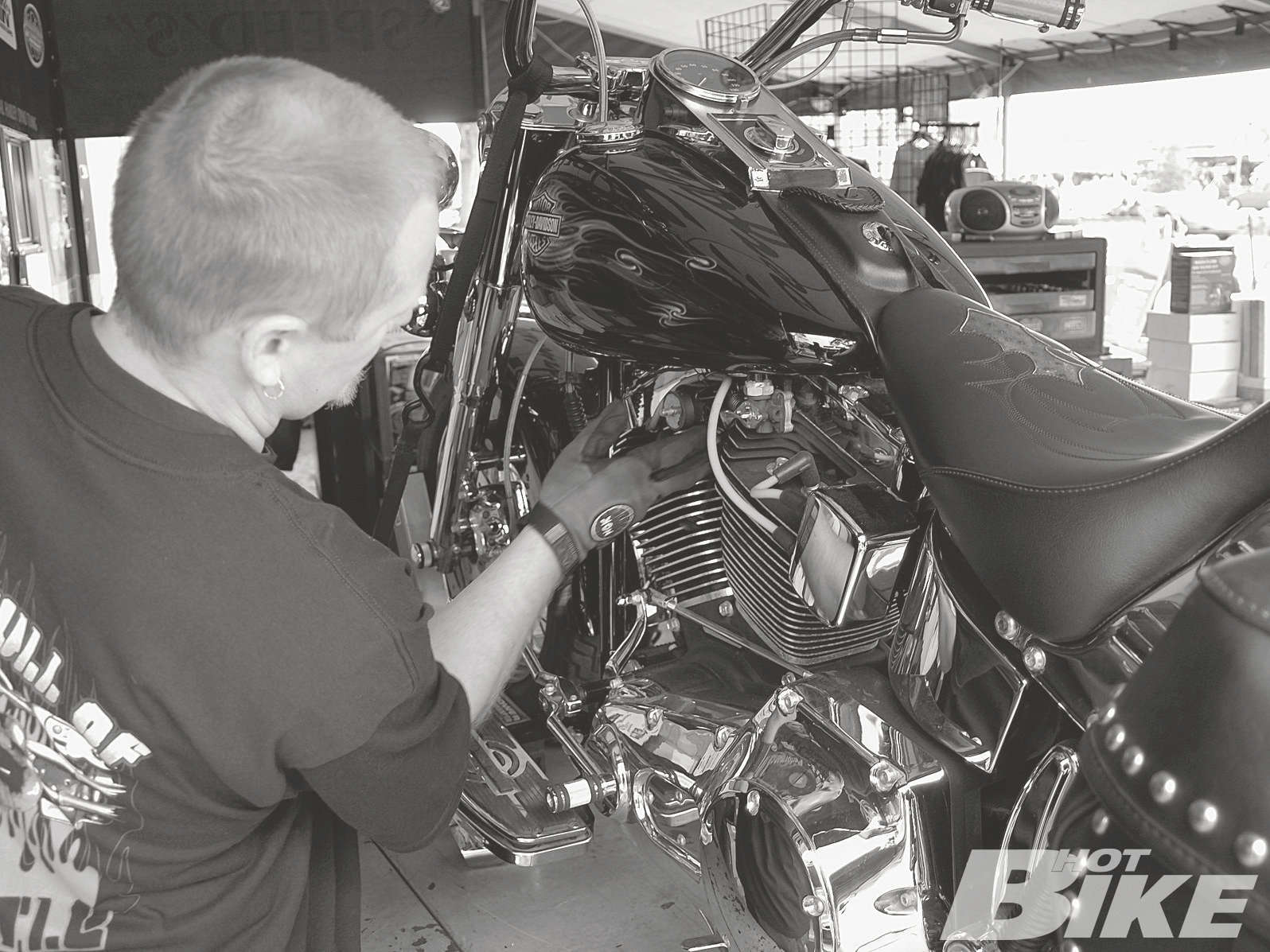 Coming from a carburetor or a pair of injectors, a perfectly calibrated fuel mixture won’t provide all the performance it’s capable of if it isn’t lit off at the right time with a big, fat spark. That optimized fuel mixture needs an equally optimized ignition system and pro tuners know it. At Speed’s Performance Plus (SPP) an ignition upgrade is always part of the plan. “It doesn’t take much, either,” says SPP’s Jason Hanson. Maybe some hot new coils, definitely an adjustable control module, quality plug wires, and performance plugs to match, that makes up the parts list. But first come the basics, those common ignition problems that crop up from time to time. “And we see it all,” say the guys at SPP. No doubt, they travel the country tuning literally thousands of bikes a year.

“Most often,” says Jamie Hanson, the other half of this two-brother team, “when a bike comes in spitting and coughing with an ignition problem, a coil might be shot, a plug fouled, or, and this happens a lot, the guy might have gotten a little too fancy trying to hide new plug wires but actually caused his problem by letting those wires rub up against something or get pinched and broken.” None of that takes long to repair, but it’s a shame to just stop there. A few upgrade parts along with a “dyno tune” of the ignition pays off big, and the more modified the engine, say the guys at SPP, the more important that ignition upgrade becomes.

Along with custom calibration, upgrades to the coils, plugs, and plug-wires make sense, too.

Neglect the ignition, specifically the advance curve, and you’ll be leaving a lot of the gains from any performance pipes, pistons, cams, and heads that you might already have right on the table. On a fuel-injected bike that custom ignition tuning, setting the timing and advance can be done using the same Power Commander that reprograms the fuel delivery. Just as precisely, too, adding advance where it’s needed or taking some away 1 degree at a time at 250 rpm increments from idle to redline. With a carbureted bike it’s pretty much the same story, differing only in how you get there. Speed’s uses the plug-in Daytona Twin Tec modules on those bikes and with the Twin Tec software, custom calibrates the ignition exactly as it would be done with a Power Commander, right down to the option of multi-spark settings and single- or dual-fire. About that…older Harleys, pre-Twin Cam, would fire both spark plugs simultaneously. There are drawbacks to that. While one spark plug is lighting the charge in the cylinder ready for it, the other is sparking off in a cylinder that’s not ready for its power stroke. If any residual fuel/air charge is left in that cylinder, which is almost always the case, it’ll also be ignited. That can have an engine actually working against itself. Set to single-fire a Harley is a much smoother-running motorcycle.

Along with custom calibration, upgrades to the coils, plugs, and plug-wires make sense, too. High-output coils, delivering up to 45,000 volts, will definitely make for a smoother-running, easier-starting engine. Matching those hi-po coils with the best set of low-resistance wires you can find is another good move. True, due to the relatively short lengths involved in motorcycle applications the energy loss in spark plug wires isn’t that great. But OE-style carbon-core suppression cables can, and do, deteriorate. Solid copper-core cables, on the other hand, aren’t always compatible with those adjustable ignition modules. A good replacement, savvy tuners have found, is a spiral-core type spark plug cable, readily available. And all spark plugs aren’t created equal, either. Iridium tipped plugs, such as the NGK Iridium IXs SPP uses, have been designed specifically for the performance enthusiast. Yeah, they’re a little more expensive, but besides reliably igniting that mixture, they have superior anti-fouling characteristics. They last. Choosing the right heat range for those plugs is important, too. Modified engines, especially when the compression has been bumped up, will generally require a change from the stock spark plug specs. When the compression goes up so does the heat, and since spark plugs must remove heat, a colder heat range spark plug might be needed. Skip the ignition step in a performance tune and you’re missing out on a lot. Talk to any tuning pros, such as the guys at SPP. They’ll tell you. Check out their website for the 2012 tour schedule. When it comes to performance there’s no reason to leave anything on the table. HB