When Jason says this 144-hp combination turned out completely streetable and reliable he isn’t kidding.

How does this sound: an everyday-rideable and mega-performance Harley that starts every time, settles into a nice peaceful idle, and then takes you anywhere you want to go and back again—and does it with 144 hp and 150 pounds of torque on tap? Any of that sound like fun?

For some riders it sure does. “That’s pretty much what we were asked to deliver,” Jason Hanson at Speed’s Performance Plus says. “A guy recently came to us wanting a mountain motor when it came to the power, but he wanted it to be just as smooth, cool running, and all-around responsive and rideable as any other street-performance engine we’d build or tune.” In short, the guy wanted it all, bragging rights when it came to the numbers, all that power to play with, but wrap it up in a no-hassle Harley that he could ride anywhere any time.

“At first I wasn’t so sure it could be done,” Jason admits. Unlike so many of those big-inch/high-power engines that can shake the fillings out of a rider’s teeth and loosen up every nut and bolt on the motorcycle, SPP has spent decades building and tuning engines known for their smooth, predictable, cool running, reliability, and most important their everyday usability. Which is exactly what this guy wanted—there just had to be lots of it.

Before saying yes to this challenge, Jason, Lyle Larson, and the SPP team put their heads together to map out a plan, determining what might work and what definitely wouldn’t. Even so, building the engine became a trial-and-error exercise. With a happy ending.

For the basics it was decided the engine would be a 124-incher and the cases would be Harley-Davidson. But that’s pretty much where any Motor Company association ended. Spinning inside those cases there’s an S&S lower end completely prepped and dynamically spun balanced by Revolution Performance. The result is a virtually vibration-free engine. Continuing the work, the cases were machined to accept big-bore cylinders, genuine S&S components filled with ping- and detonation-free mild compression pistons, and long-life and durable Timken bearings. The camshafts were also S&S, and with Easy Start technology coupled with a strong Adventure Power battery the engine cranks over and fires up like a stocker. The cam chest also features that billet aluminum and bushed Speed’s Performance cam plate for its increased stability, longevity, and oil pressure. Up top Jason used cylinder heads from R&R Cycle, Stage V versions, and the valvetrain includes SPP’s offset rocker arms that not only straighten out the geometry but reduce valve train noise. One of those SPP finned-aluminum oil filters/oil coolers joined the mix, and everything was assembled with leak-free Cometic gaskets. Finishing things up, there’s an oversized S&S throttle body on the intake, a custom 2-into-1 system with head pipes that almost immediately open up to a big 1-7/8-inch diameter to take care of the exhaust, and NGK’s iridium-tipped plugs light the fire. All of this was tuned with a Dynojet Power Commander V with AutoTune. Lubrication, incidentally, comes from both Bel-Ray and Royal Purple: Royal Purple synthetic in the engine and Bel-Ray synthetic in the transmission. By the way, Jason says if you haven’t yet tried Bel-Ray in the transmission, you should; the difference it makes in shifting ease, he says, is incredible.

Once complete the engine went back into the 2010 CVO Street Glide it came out of, and when Jason says this 144-hp combination turned out completely streetable and reliable he isn’t kidding. With work completed in the SPP South Dakota shop the owner threw a leg over the saddle and rode home to New York. And then immediately up to Laconia, New Hampshire. The 3,000 smooth, trouble-free miles averaged 43 to 45 mpg. When the folks at Laconia heard about this they invited the SPP team to do a little show-and-tell at the Broken Spoke Saloon to explain it all. Their answer? “It’s possible,” Jason says. “You can have your cake and eat it too!”

Keep up on Speed’s Spotlight and more tech in our print edition. 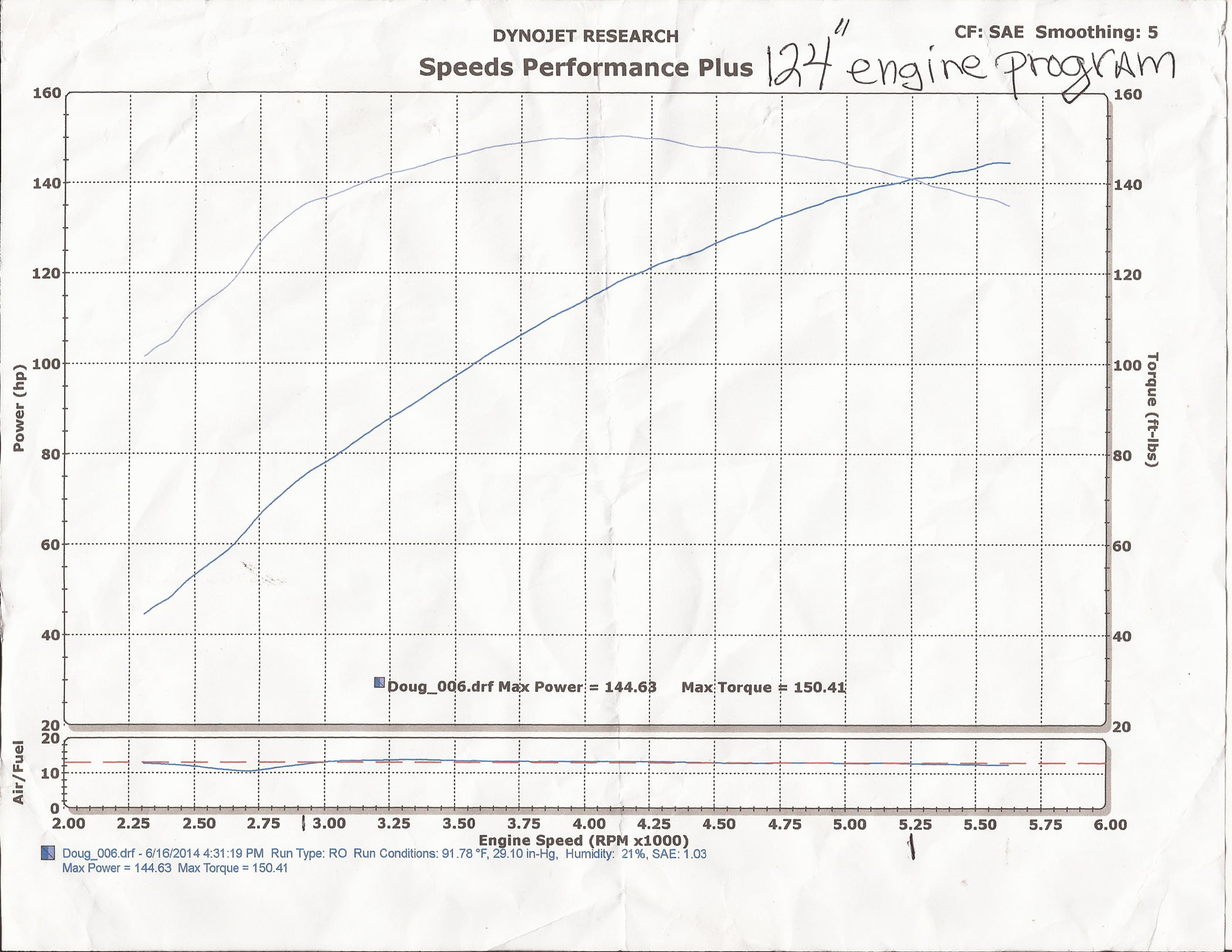 See the dyno results for yourself.