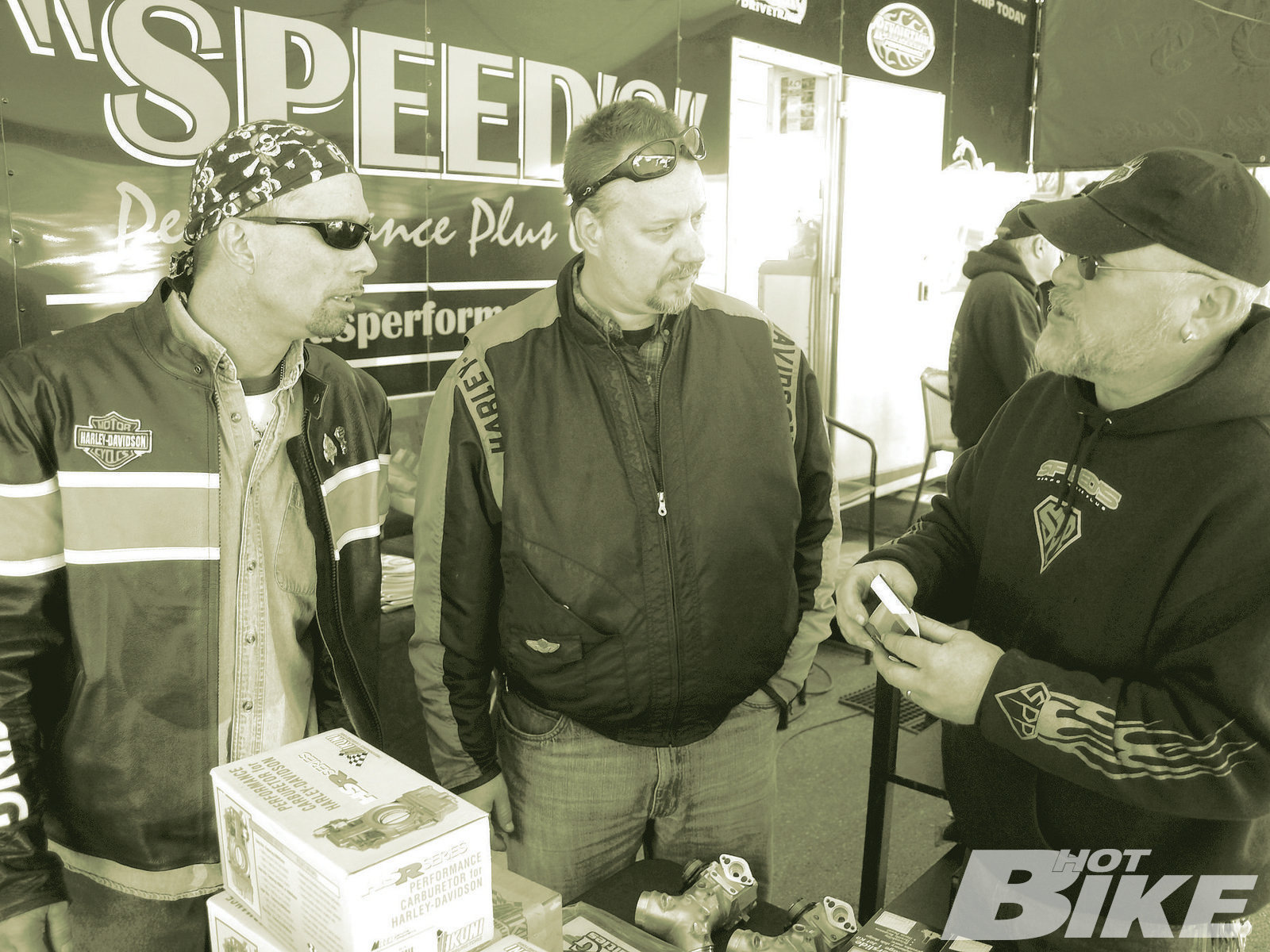 The biggest complaint about those ’07-later Harleys, and it’s no secret, is their lack of low-end power. No sugar coating, these bikes are sluggish around town and it’s especially noticeable with the baggers. Don’t despair. There are a couple easy bolt-ons to address that complaint and the guys at Speed’s Performance Plus (SPP), who tune and hop-up thousands of these bikes every year, have some solutions.

When the goal is maximum bang for the buck, the first step is always that tried-and-true Stage 1 tune we’ve talked about before. Freeing up the intake and exhaust and re-mapping the ECU is a must. Switching to synthetics for all the lubricants is a good move too. So what’s next when the goal is more low-end grunt? We’re talking cam swaps/cam-swaps and then some, because once you go into that cam chest there are a few other moves to make that are well worth the effort.

On the pre-’06 Dynas and pre-’07 baggers and Softails, the TC’s cam-drive chain and its tensioners can be problematic from the get-go, especially those tensioners. It often doesn’t take long for them to wear out, even break up, and cause all sorts of mechanical mayhem. The switch to a gear-drive setup is an option and so is installing the newer chaindrive setup with hydraulic tensioners. Then there’s the matter of the OE cam-support plate. On the late-model 96-inchers, Harley’s seen fit to eliminate the outer cam bearings. The inner bearings are still there, but the outer camshaft journals run right in the aluminum of that factory cam-support plate. A new cam plate kit, designed to put bearings on both ends of those cams, can be money well spent. Speed’s highly recommends it and, in fact, it’s even designed one of its own. It’s thicker than the factory piece so there’s no flexing, it has an improved oil passage system, an improved relief system, and includes bottom venting to let the engine breathe from both the top and the bottom. There’s a replacement plate for those earlier Twin Cams, as well, engines with cam bearings already in place, but this one allows the bolt-in upgrade to an ’07-and-later H-D high-performance oil pump with its bigger gears and better scavenging. That’s the “plus” part of this trip into the cam chest. Now come the cams.

A lot of guys will brag about the nasty camshafts they’re running, trying to wow you with big numbers. Don’t fall for it. Bigger is definitely not better here, at least not for a regularly ridden street bike. What those guys don’t talk about is what their bike is really like on a day-to-day basis. With the wrong cam choice it’s all-too-easy to give back everything you’ve gained with that Stage 1 job, all that bottom-end and mid-range power up to about 4,500 rpm. What you’re looking for in a camshaft is performance that pulls right from idle, with no flat spots, no lags, no lumpy idle, no pinging or detonation. This is the approach Speed’s unfailingly recommends, and while the cams that come with that recommendation might not have the wildest specs in the book it’s a safe bet they’ll deliver all the added boost you’re looking for and then some, without having to make any changes to the cylinder heads.

Most tuners and cam grinders agree that the factory’s Beehive valve springs, standard on all ’05-and-later bikes, allow up to .550-lift before you have to start worrying about possible coil stacking or checking for clearance issues. You don’t have to go to that limit to get the kind of performance you’re after. A set of .525 cams, for instance, a favorite at Speed’s, will step-up the horsepower and torque nicely, adding 10 to 15 ponies easy, and 10 more lb-ft of torque. That 70-plus horsepower from the Stage 1 tune now becomes a healthy 80 to 85, and the torque jumps up to a really usable 93 to 98. That’s a nice Harley. And it’s still reliable—everyday rideable—and pulls like there’s no tomorrow.

Of course, when the budget permits, things can get even better. Big-bore cylinders and pistons, a little more compression and maybe even some performance headwork are all in the cards. But that can wait. In the meantime, if the low- to mid-range grunt is lacking, and you’ve already gone Stage 1, think cams. Just don’t think too wild. Talk with the guys at SPP about all this, and check their website for even more info. Talk with some riders who’ve already gone this route. They’ll tell you. There’s plenty to do inside that cam chest to make a Harley better.

On a more serious note, our dear friend Wayne Hanson—“Speed” of Speed’s Performance Plus—has hit a hard patch. A few months back while setting up for an event in Mississippi, getting ready to put that SPP touch to another bunch of Harleys, Wayne didn’t feel right. A trip to the nearest ER confirmed the worst, a brain tumor. Rushed into surgery, the tumor was removed. Wayne’s home now beginning a long, hard road to recovery.

The Hanson family and the SPP team has set up a website where everyone interested can keep track of Wayne’s progress in this fight. You can send your best wishes and, if you choose, help by contributing what you can to defray the monumental expenses sure to come. Insurance, even the best, goes only so far. They’ve asked that you please do what you can to pass the word. The website address is www.giveforward.com/waynehanson. There’s a photo included here with Wayne, on the right, helping out a couple riders in Daytona.

Wayne and the guys at SPP have never held back, as thousands of riders will attest. Now it’s time to give some of that back and give forward. Thanks. HB