The One That Started it All 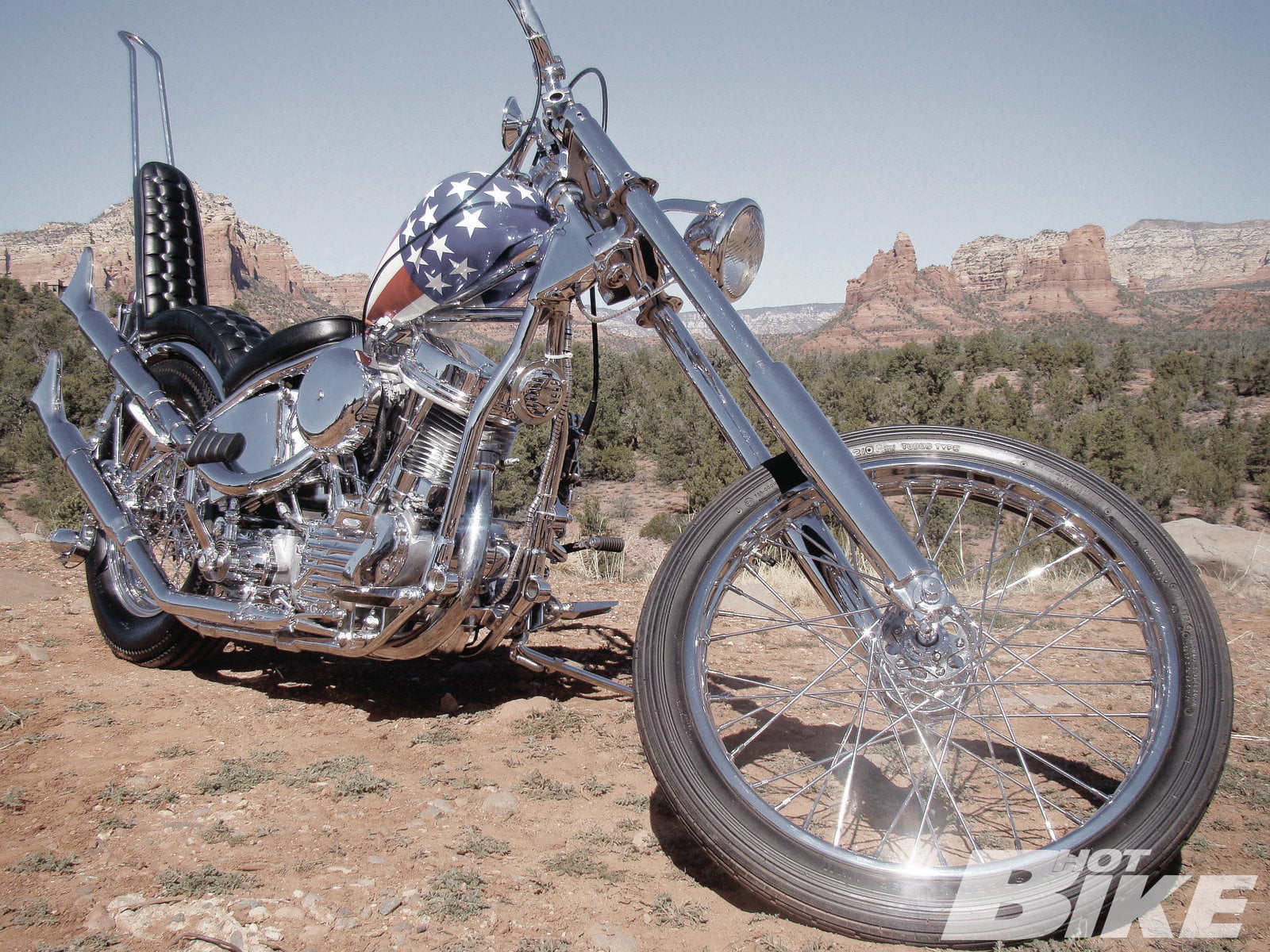 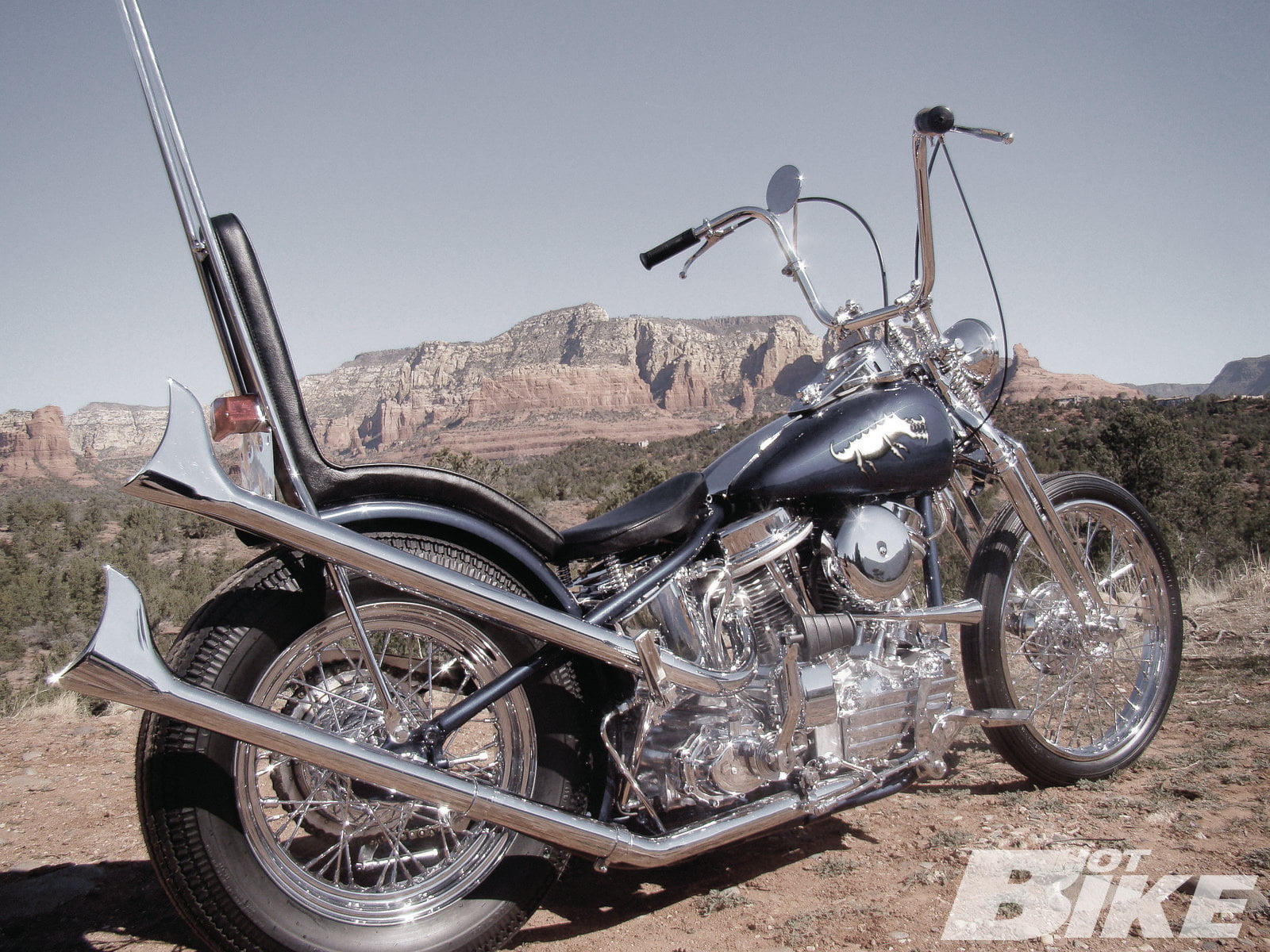 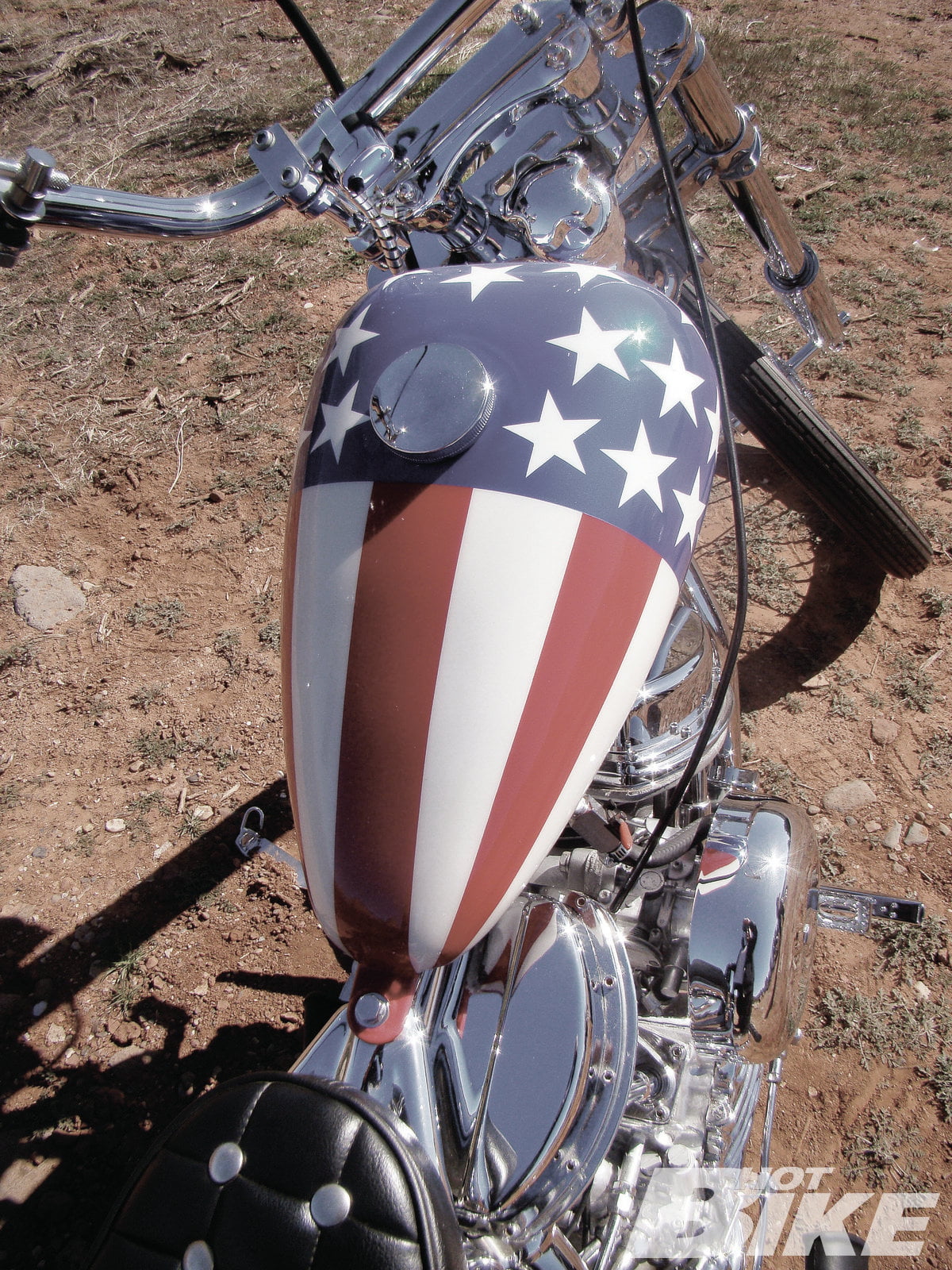 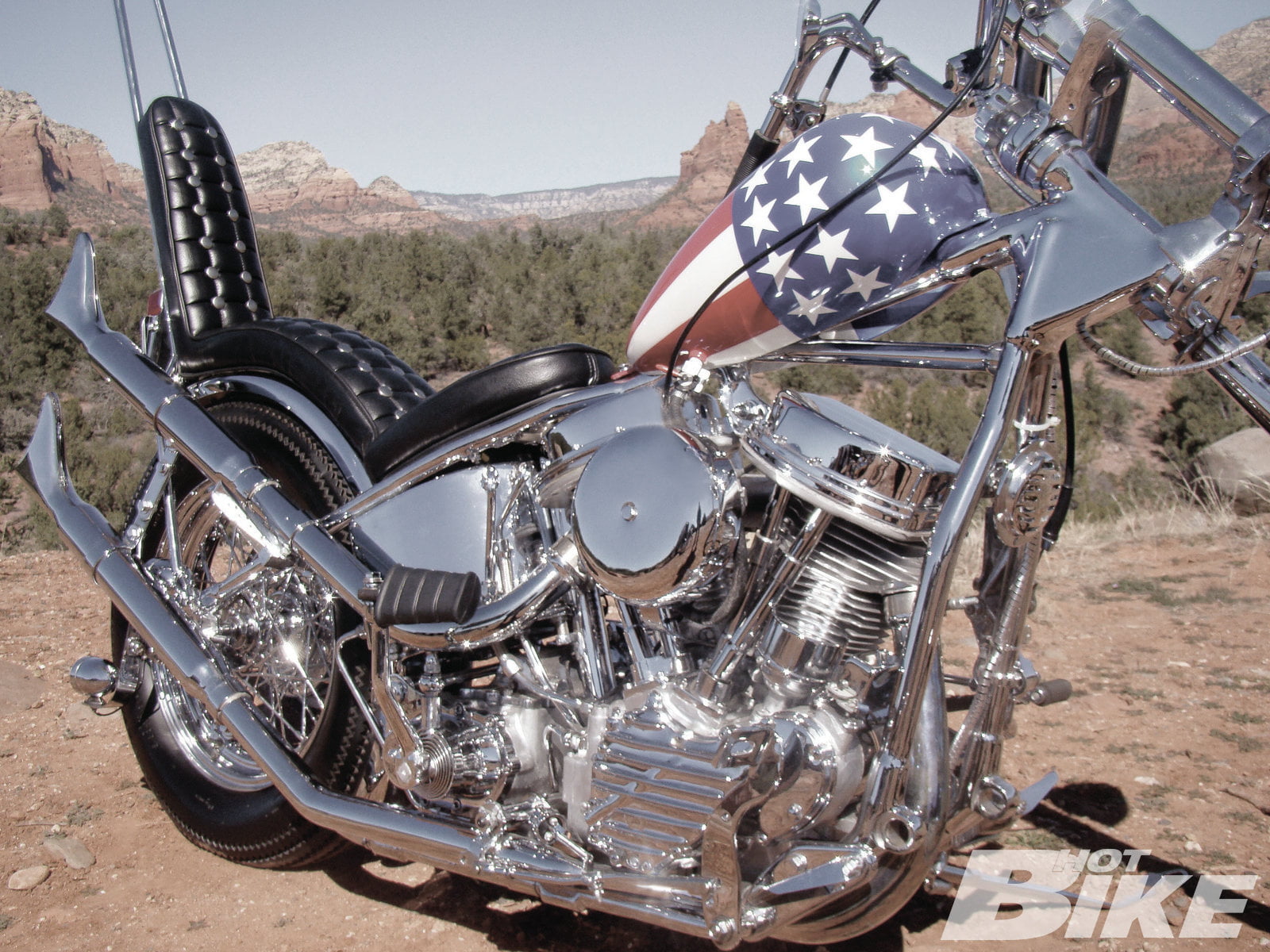 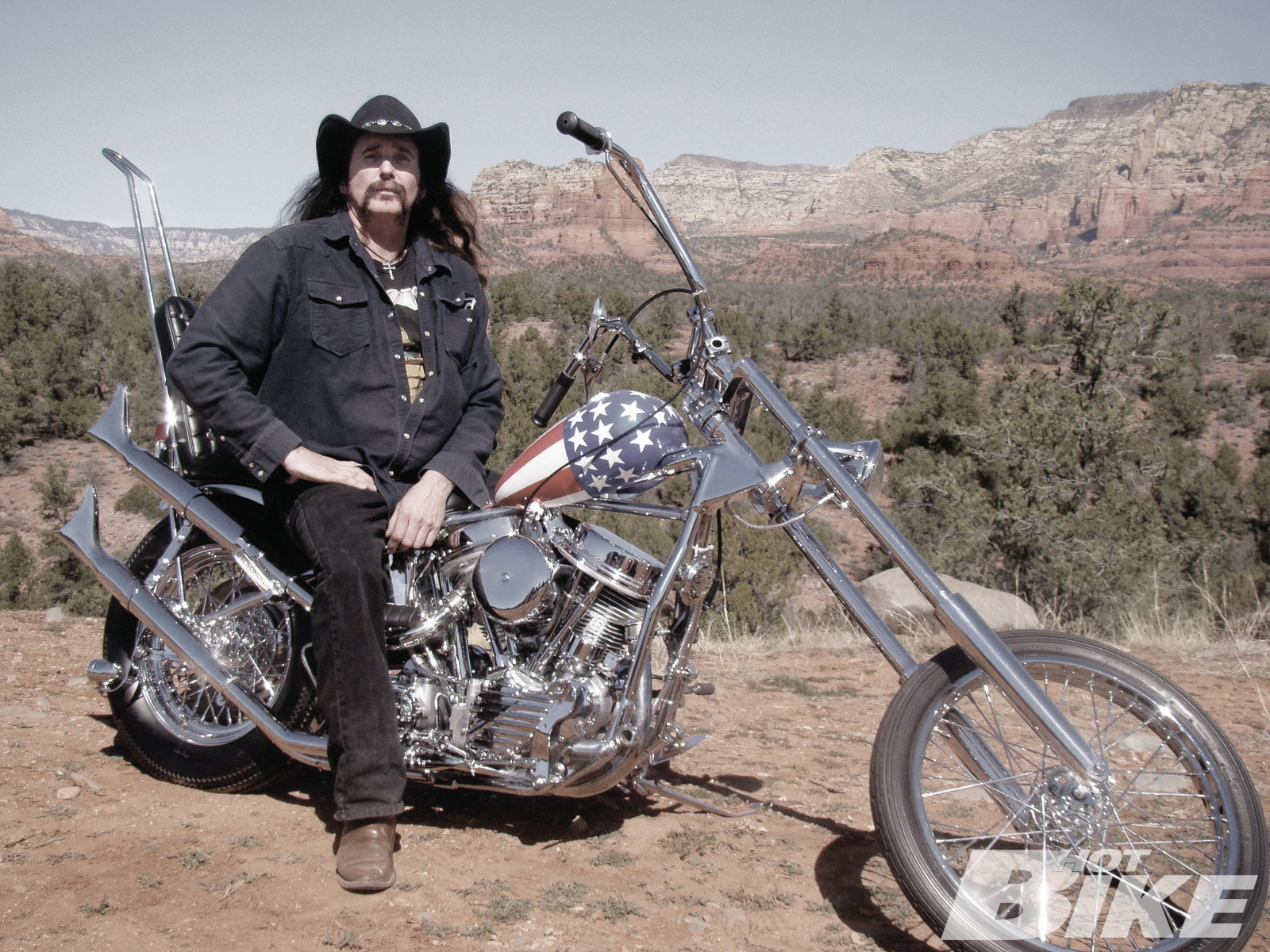 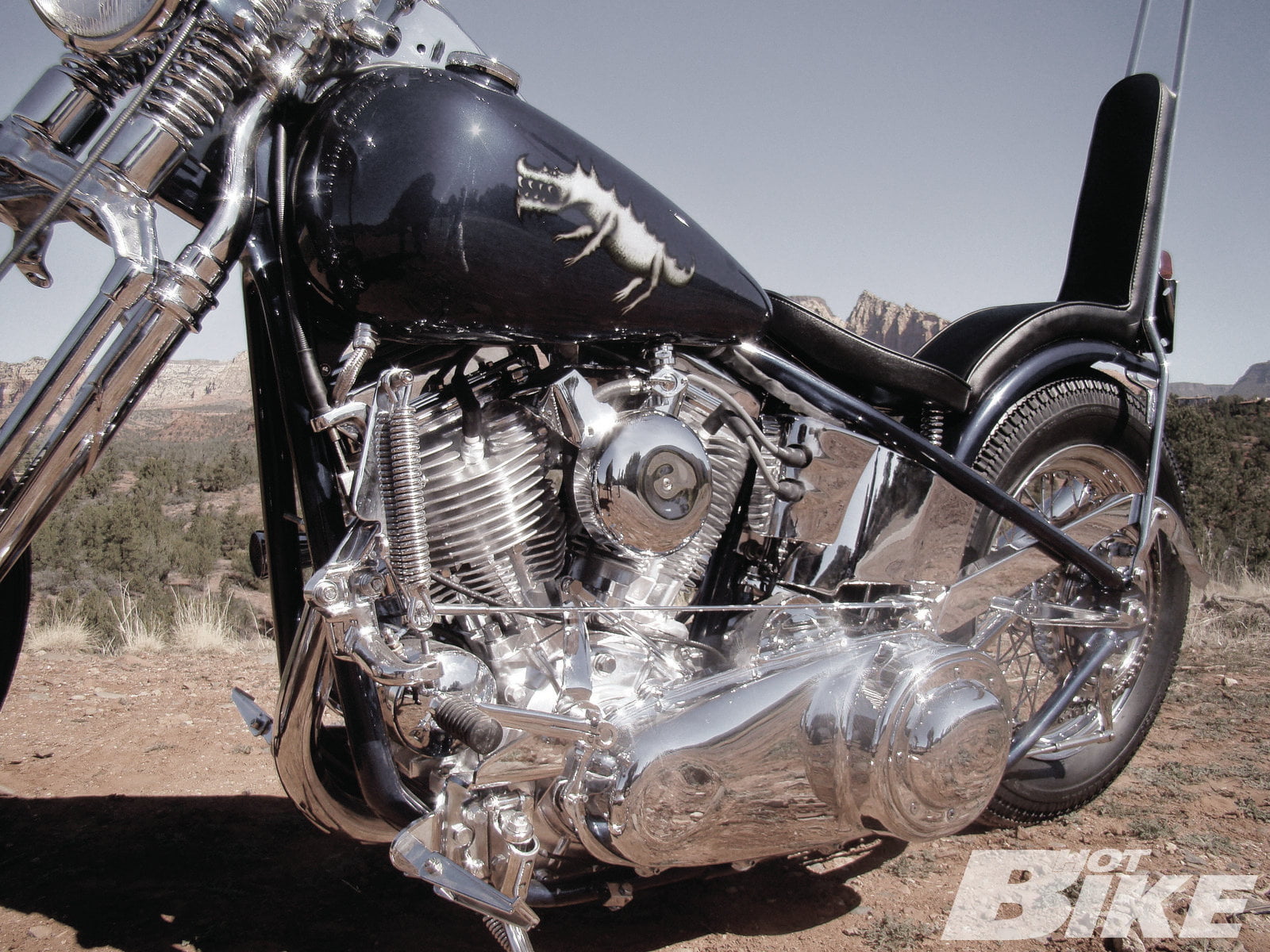 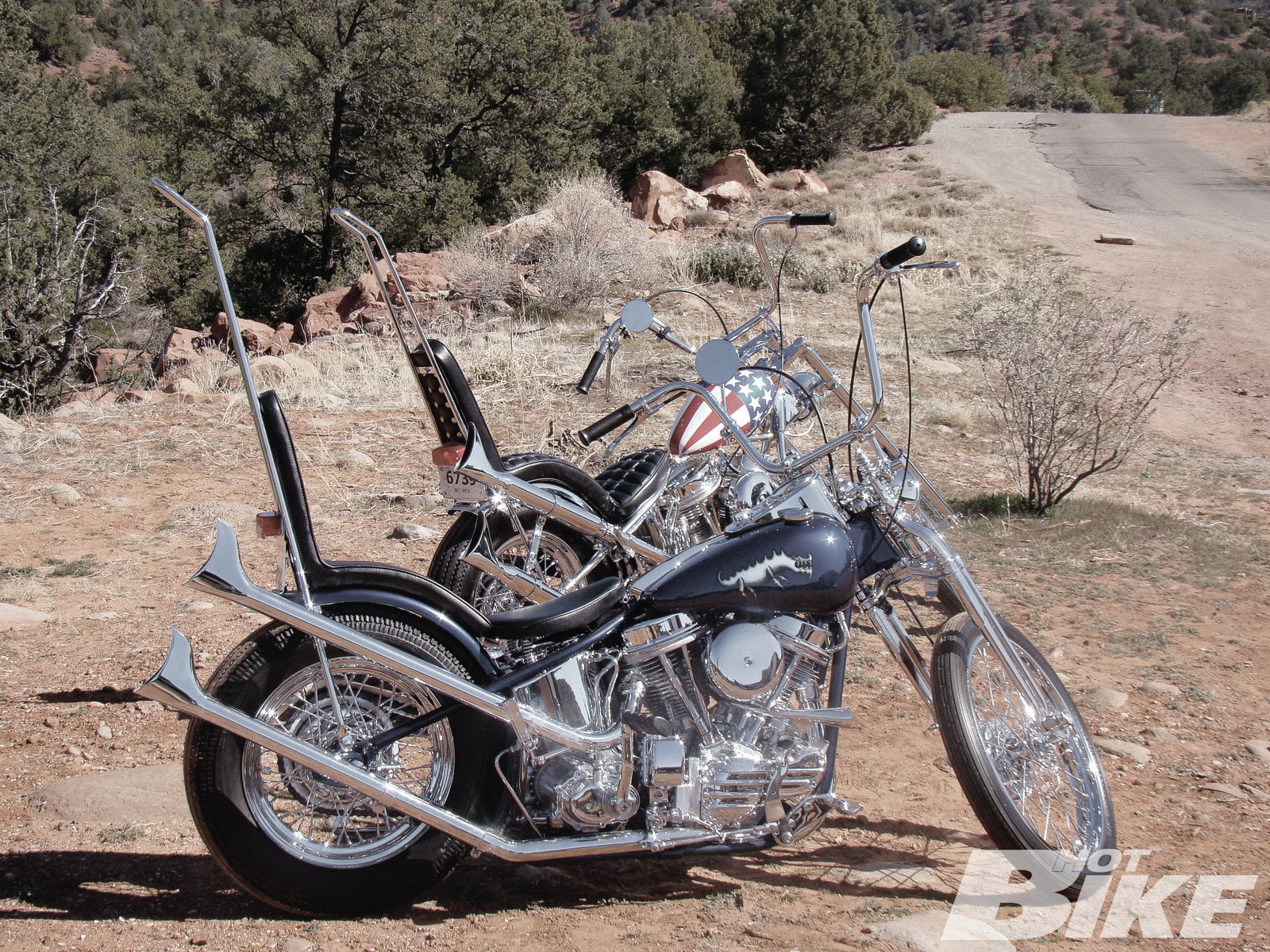 If you ever wondered how the chopper became the mighty icon it is today, we have to ride back to 1966. A full three years before Easy Rider roared across the silver screen indelibly imprinting on our biker brains the shape and sound of what is cool, the film Wild Angels set the style and tone of generations of badass bikers to come.

Peter Fonda’s first motorcycle flick began with him rolling on his surprisingly stock ’57 Panhead nearly running over a little boy on a runaway tricycle; a hard stop he would not have been able to make later on his Captain America bike, a particularly wonky machine to control.

Outside of the paint, sky-high sissy bar, ape hangers, fishtails, lizardy tank graphic, and some chrome bits, the “Dragon Bike” was pretty much as it rolled out of the factory, including the stock steering geometry. The bike’s springer axles stick out an inch or two, creating the illusion of a custom rake. It was Fonda’s oozing attitude that put the rakish into the Dragon’s rake.

Wild Angels was directed by B-movie king Roger Corman and co-written by Peter Bogdanovich. It also starred Bruce Dern, Nancy Sinatra, Diane Ladd, and a few real Hells Angels. Not only did it arguably launch (for better or worse) the biker lifestyle as the world recognizes it today, the movie produced at least one love child, Laura Dern, the loin-fruit of Dern and Ladd. More significantly, the movie spawned some of the greatest quotes in B-movie history, led by this seminal statement:

We’re only surprised there wasn’t some reference to open public intercourse on every street corner in America, but the point was made. It was perhaps that quote that inspired the Wild Angels producers to label it, “The most terrifying film of your time!” And because of this movie, some people are still scared.

Enter rhythm guitarist, harmonica player, and unparalleled classic chopper builder Jack R. Lepler. When he’s not scouring the nation for leads on lost and forgotten Panheads and other original parts, Lepler spins wrenches and keeps the locals happily motoring. His shop is on a dirt road somewhere in the scorched outer-lands and named simply to the point: Jack’s HD Repair.

“I have rebuilt hundreds of Harley motors,” said Lepler. “Hot rods, drag bikes, big horsepower engines, massaging them into all kinds of frames, but I keep coming back to the classics.” It is more than a labor of love, explained Lepler. “It’s agony.

“I found it’s very, very difficult to get people to work on your bike who really give a shit. And some that do care don’t have the skills or sense to do the job right. I pretty much realized after years of employees and partners, I pretty much had to do it all — find a wreck, find a repo, travel around the country, buy the bike, tear it down, re-wire it, paint it, fabricate and fix it,” added Lepler. For the Dragon Bike, the motor had to be, of course, a Panhead. “And it had to have an H-D title, and this is extremely hard to find.”

The lean 58-year-old looks right out of Central Casting, his long, black, wavy hair tucked under a big, black cowboy hat, which miraculously stays on even on the road. Lepler rode out of California some 16 years ago, leaving a plum H-D service manager job and the speciousness of Tinsel Town behind. He settled in the Arizona desert around Lake Montezuma, an area once at the bottom of an inland sea and later home to the Yavapai Apache. He designed and built his house and one-man shop there, carving out a homestead like a Wild West pioneer.

Lepler, whose credentials include advanced factory training and the graduating class of Harley’s first service manager training program, is a purist throwback. More artist than mechanic, his passion falls to the elegant and simple. Lepler’s ’60s-style choppers feel, look, and sound like we just rode back to the LBJ administration.

That heady, pre-unleaded aroma of oil and gasoline pumping through American-forged iron fills the air around one of Lepler’s masterpieces. He recollects some 15 or 16 Captain America bikes preceded the Dragon, all of which have gone to collectors, museums, or filmmakers. In fact, Lepler’s first Captain America replica got the attention of the producers behind the long-awaited sequel to Easy Rider.

After years of intellectual property legal wrangling, Easy Rider: The Ride Back finally debuted at Daytona this year. Lepler built several bikes for the movie, including the ’47 Kuncklehead Billy Bike, served as the film’s bike wrangler, and even had a part.

“From shipping the bikes partially disassembled overseas to the Cannes Film Festival to reassembling them and reversing that process for the trip back (and mind you I did this for two trips to France) working in the movie, working off set taking care of the machines, working 14-hour days, I can honestly say it was a thoroughly exhausting experience,” said Lepler with a grimace and a grin. It wasn’t his first rodeo. Lepler also built four fat-tire chops for the movie, Poker Run.

The Dragon Bike, however, may be his favorite. “The Captain is very cool, but let’s say a ‘challenge’ to ride, but moreover there’s just something about the Dragon that makes me want to build one for myself. It’s an exact replica, right down to that cartoonish [sic] dragon graphic there on the tank. Looked more like a gecko than a dragon to me, so I had airbrush artist Adam Bean work his magic. We wanted to make sure it was faithful to the original, but add just the right amount of color and contrast to make a subtle improvement. I think Adam did a helluva job,” said Lepler, who despite his grinding schedule, looks at least 10 years younger than the date on his motorcycle license.

“In some ways,” he added, “the Dragon is even more of a biker’s bike — it’s the granddaddy of all choppers and it cemented Peter Fonda’s role as an original, maybe the original, in chopper history. It’s built from the ground-up to ride. It handles pretty well, feels comfortable, has good power, and you hardly ever run over little kids on tricycles.”

Fonda’s historic role as Heavenly Blues as a kind of hard-ass “biker zero” more than influenced the biker lifestyle, it defined it. There weren’t many biker flicks before Wild Angels, the best being 1953’s The Wild One, famed for Marlon Brando’s portrayal of a fun-loving sociopath. After the movie was released, every American boy wanted a leather motorcycle jacket, previously worn almost exclusively by thugs and cops. It changed how delinquent American youth dressed.

In a case of life imitating art, Wild Angels had some off-camera drama that may have been better than anything seen on screen. The Hells Angels, according to Corman, sued him for defamation of character after the release, claiming the movie depicted them as an outlaw club when, in reality, they were a “technical society dedicated to spreading information about the operation of motorcycles.” Then they threatened to kill him.

Corman pointed out he could not pay out on the suit if he was dead. The club agreed. The Hells Angels went on to lose the $5 million lawsuit, and Corman lived to tell the tale. Dern wasn’t so lucky. He was beaten up during filming by two HAs for being a poseur. Dern tried to explain he was playing a part in a movie but it didn’t matter; they left him knocked out cold on the sidewalk. Dern later said, “It was, like, hey, I’m not even alive in the movie, I’m dead, and they’re still beating on me.” Maybe the video cover-line wasn’t far off: “The Wild Angels—their creedo is violence! Their god is hate!”

Corman and Bogdanovich represent the outlaw culture as an essentially American anti-hero, the free spirit who defies authority and the establishment. While fun with sex and violence is along for the ride, the ultimate futility of the life is summed up by Fonda’s character:

Medic: [said jokingly to girl dancing] Hey, don’t get none of that on me!

Mike: [cops are coming] Let’s get out of here, Blues!

If Brando was the king of cool, unknowingly launching motorcycle fashion as we traditionally know it, Fonda became king of custom, the poster boy for the biker badass, in tasty chopper style. Just how we like it.