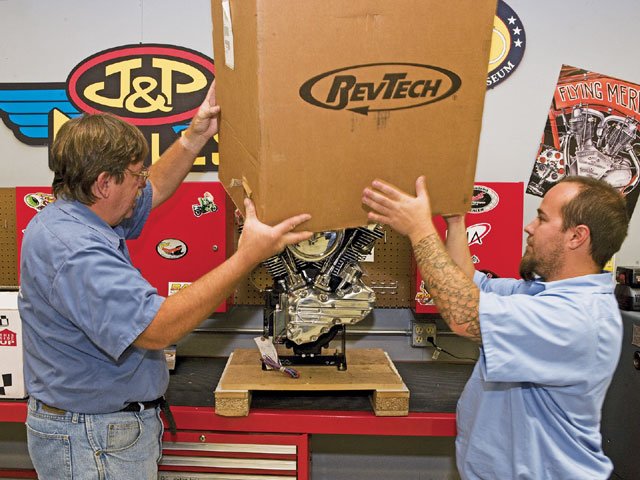 1. Here, J&P;’s Jeff Wiley and Cody Wisner unveil the RevTech Xzotic knucklehead motor that was built for the project and the RevTech tranny that will sit behind it. The 100ci motor features a 4×4 bore and stroke that fits into any Evo platform and is ready to run with a Mikuni carb and air cleaner. 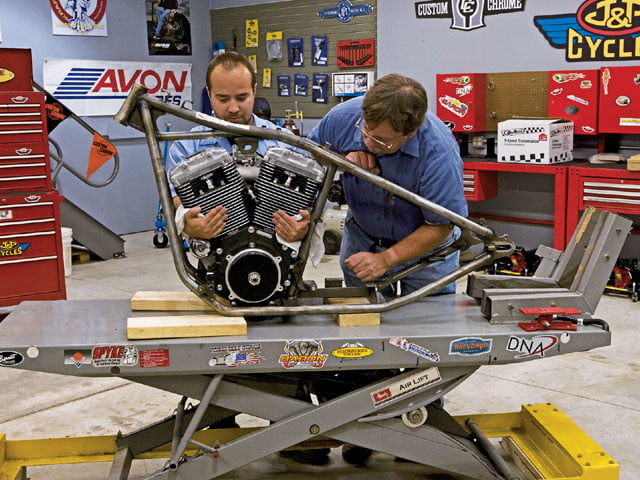 2. Cody manhandled the mill into the Kraft/Tech rigid frame. This frame features a 30-degree rake with stock stretch. It can accommodate a 180mm rear tire or a 200 with chain. 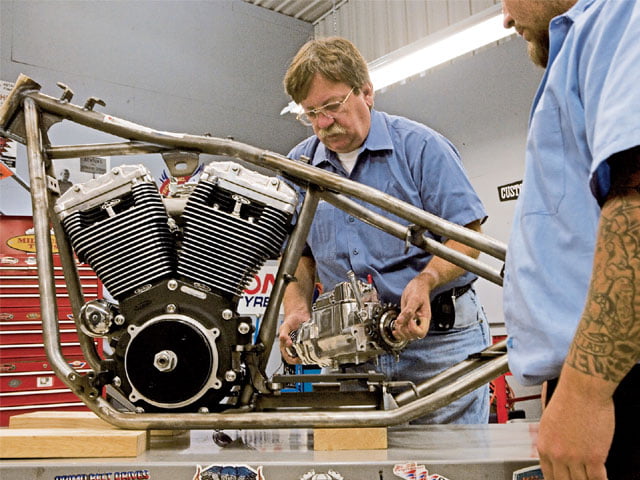 3. Jeff then placed the five-in-four RevTech transmission behind the seatpost. Although this is a five-speed transmission, it has the vintage appearance of a four-speed, complete with a kickstart. 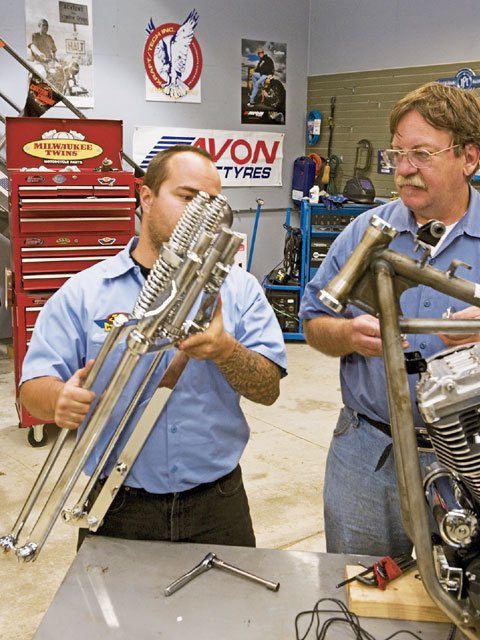 4. A chrome standard-length (31 inches) Springer frontend from DNA was added onto the frame next. It utilizes a standard 1-inch OD neck stem and Timken bearings. 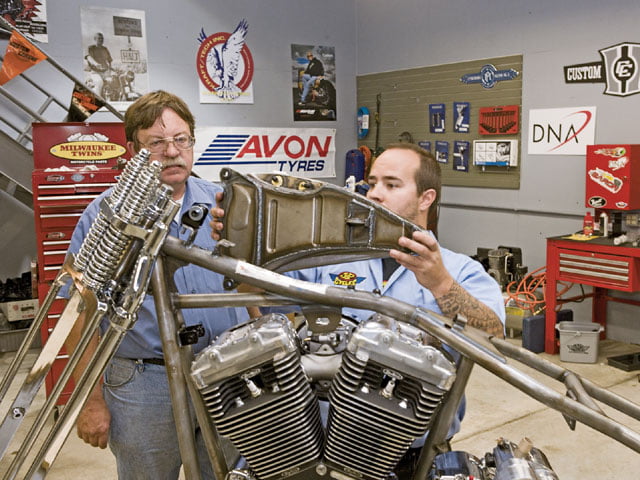 5. The right half of the Milwaukee Twins flatside gas tanks was placed into position… 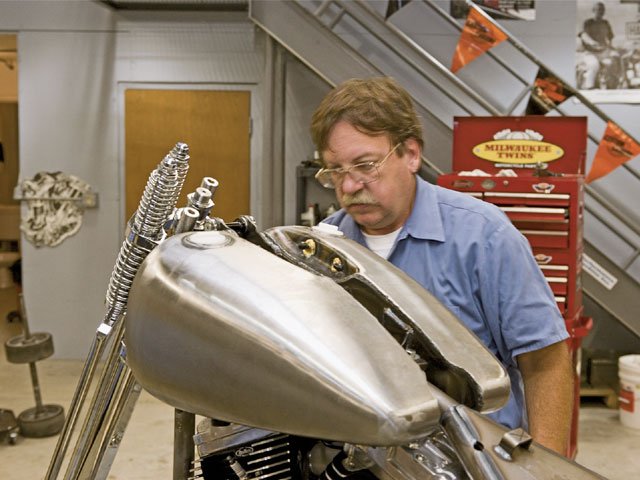 6. …before bolting up the left side of the 4.2-gallon fuel tank. 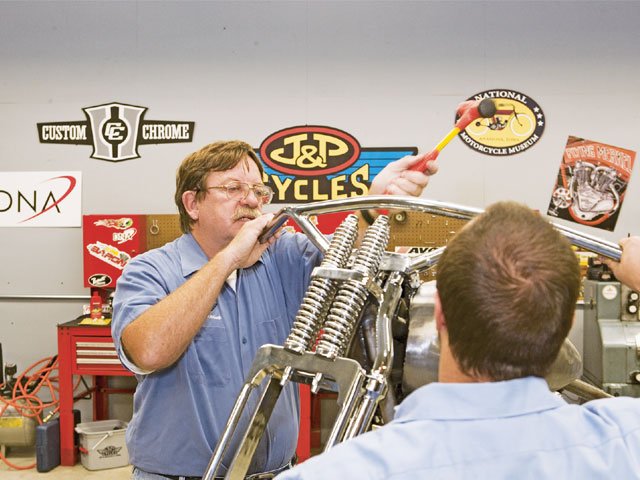 7. One-inch-diameter Jammer Hollywood handlebars round out the retro look of the frontend. 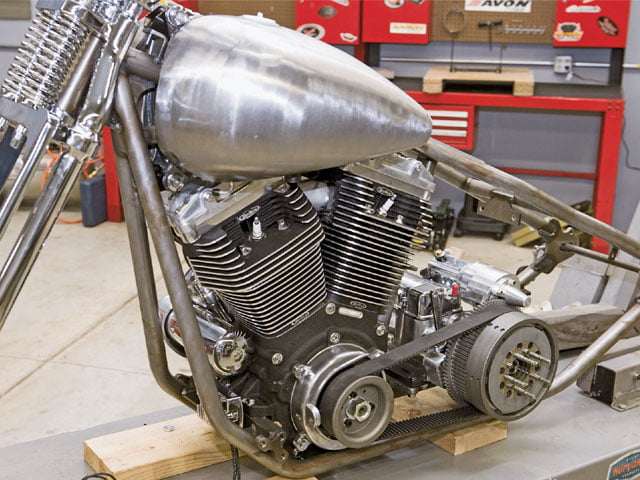 8. A Jammer open-belt primary-drive kit was used to tie together the motor and transmission. 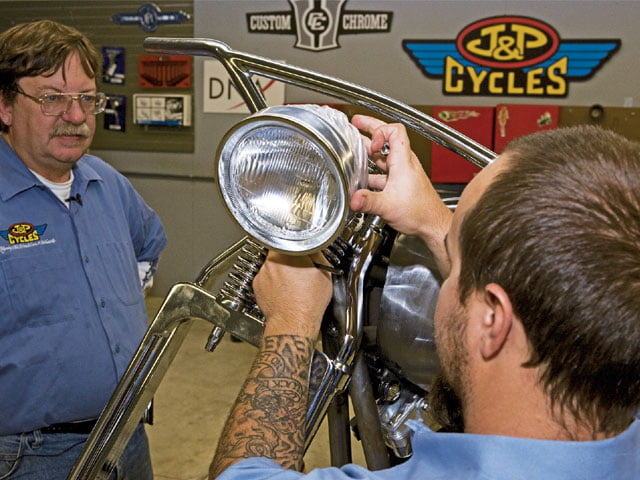 9. A 5-3/4-inch halogen headlight assembly was added to the top of the Springer. This headlight started out as a piece of billet aluminum, CNC cut, then chrome plated. 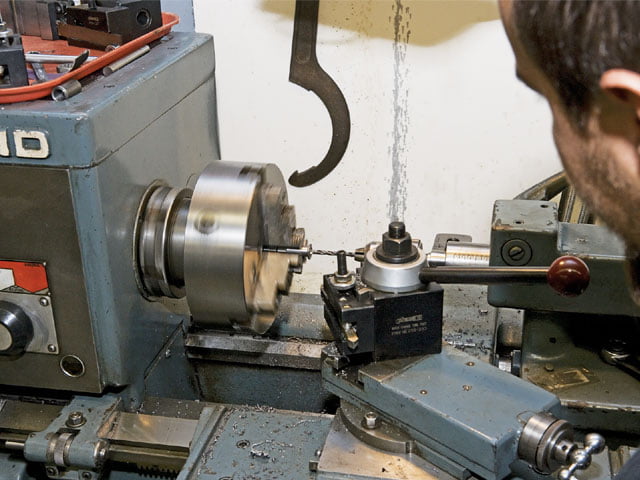 10. Although much of the bracketry and clamps for many parts were right out of the J&P; catalog, some fabrication was needed to give the bike a professional look. 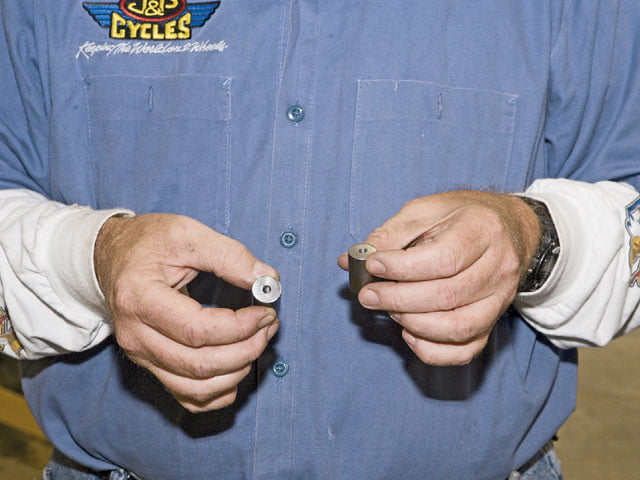 11. Here are two machined standoffs that will be used to secure the Dyna ignition coil between the gas tanks. 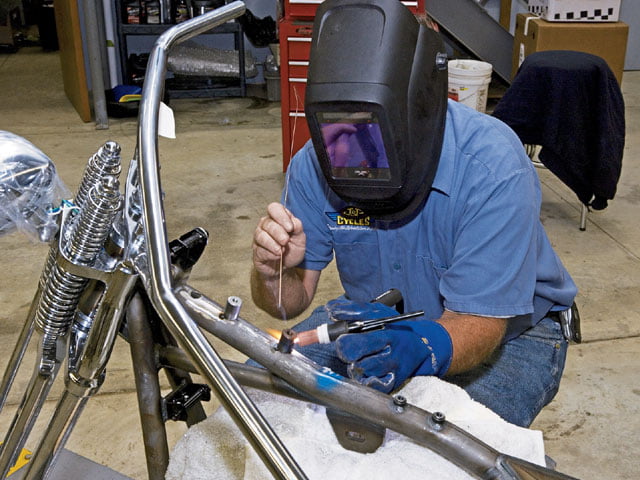 12. After removing the tanks, the standoffs were TIG-welded to the frame’s backbone. 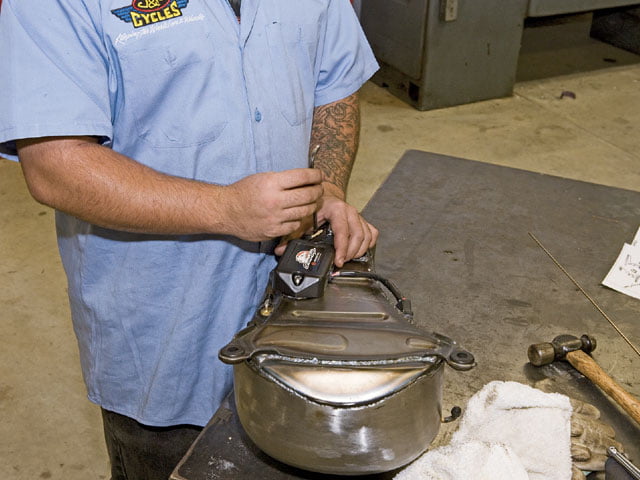 13. A Screamin’ Eagle ignition module was hidden on the inside of the gas tank. This keeps the bike’s wiring clean and out of sight. All of the electrical components would be tied together with a Wire-Plus wiring harness. 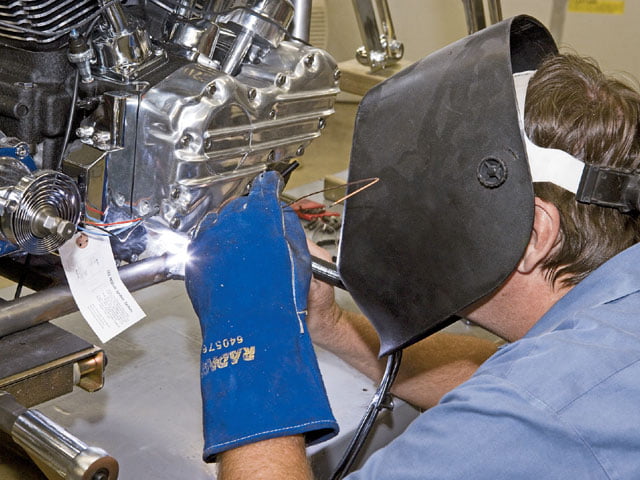 14. Tabs were welded to the frame that would hold the foot controls as well as the regulator. 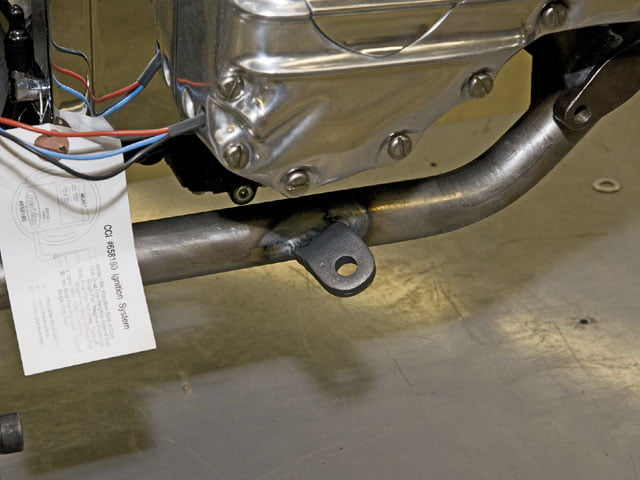 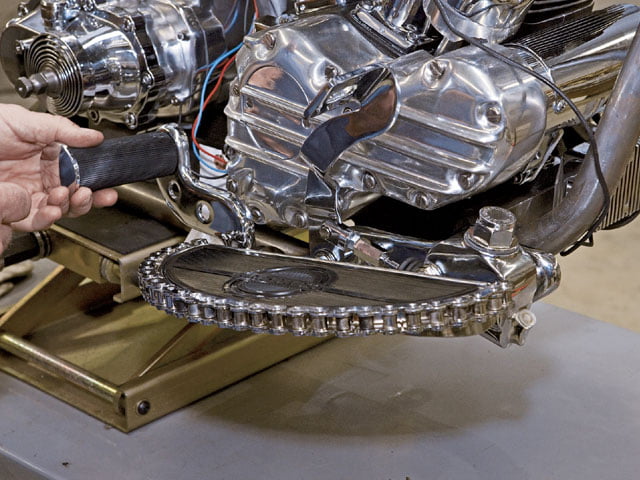 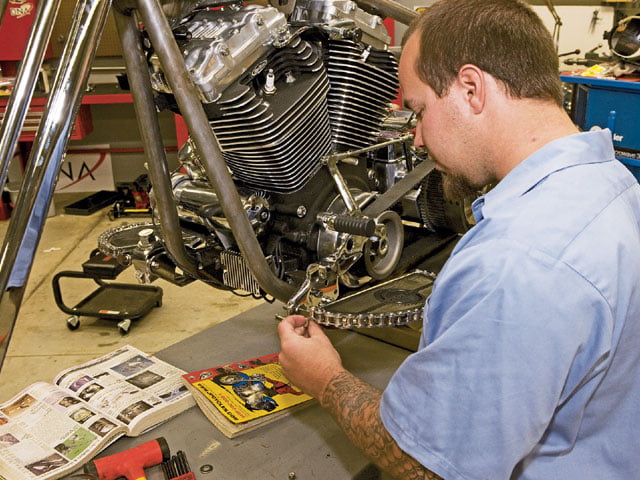 17. The left side received the same treatment, combined with a chrome shifter kit. Some of the parts are included in the main J&P; catalog, while the company’s Vintage catalog was scoured for, among other parts, the H-D-emblazoned oval floorboards. 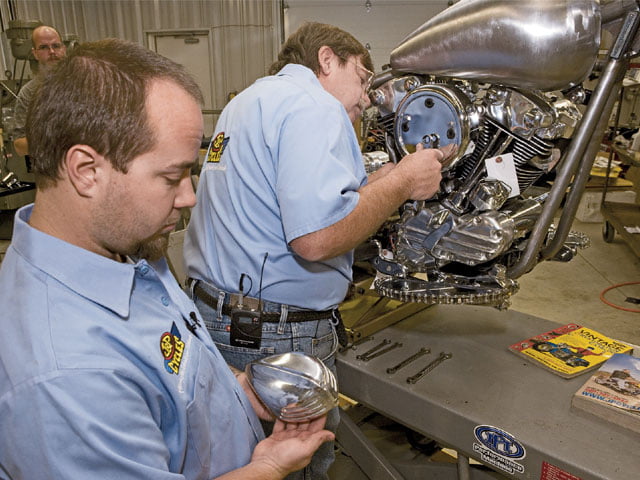 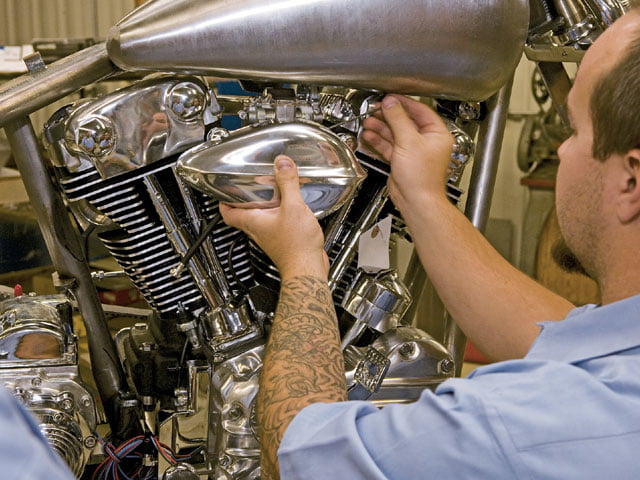 19. The Goodson cover cleans up the right side of the motor and goes great with the knucklehead. 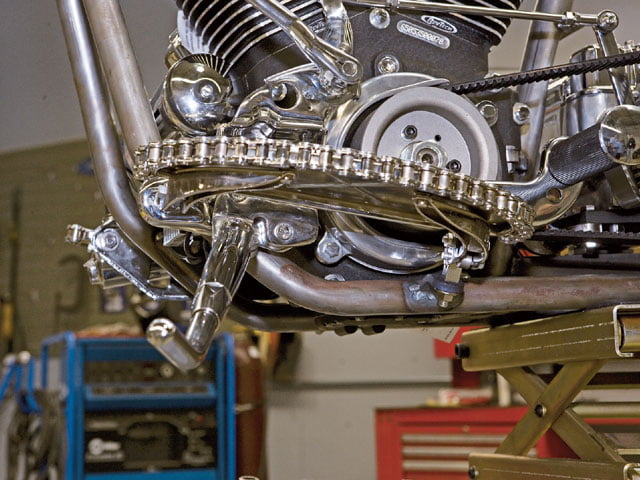 20. An adjustable Ness telescopic kickstand was installed. The length of this jiffy stand can be adjusted to tailor the lean angle of the bike. A hidden ball-bearing-design return spring has a positive feel and a sano look. 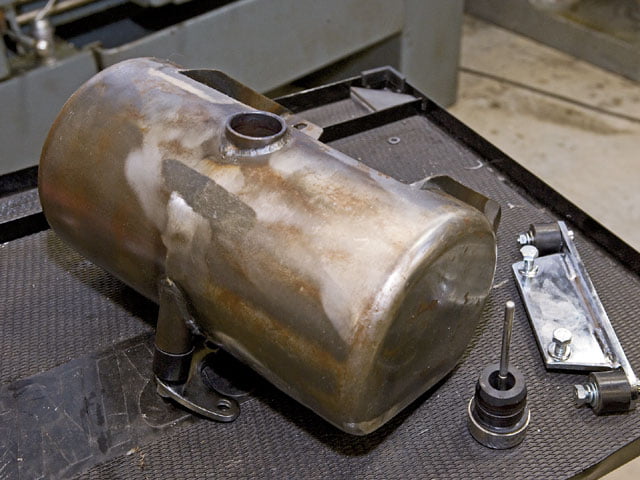 21. A 3-1/2-quart Milwaukee Twins custom round oil tank with center fill was chosen for its styling and integrated battery box. 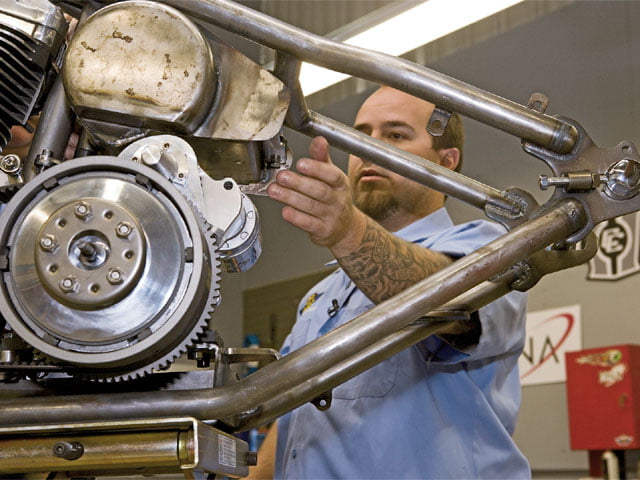 22. Cody lifted the oil tank into place to ensure clearance with the starter. The tank attaches to the frame with Softail-style rubber mounts. 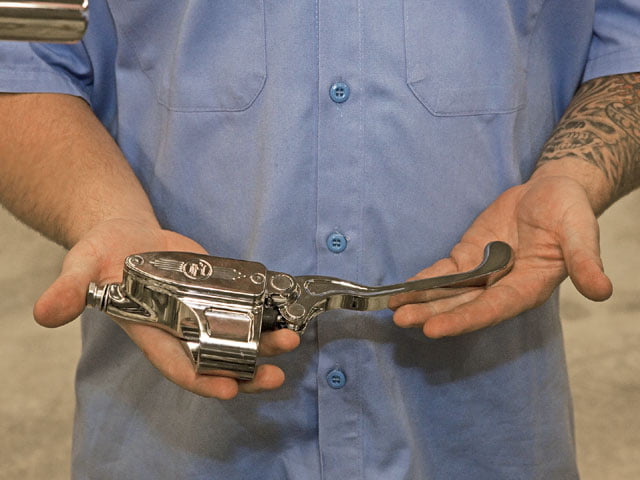 23. Chrome PM hand controls will be used for the front brake and clutch. For smooth operation, a hydraulic actuator was chosen for the clutch side of things. 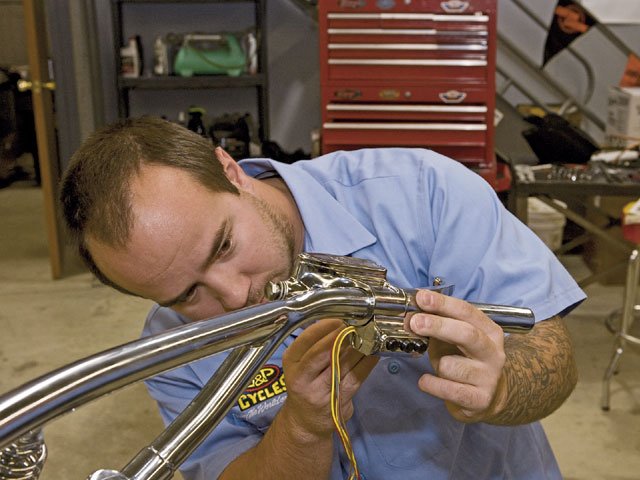 24. PM’s three-button switches mate up perfectly with their controls. 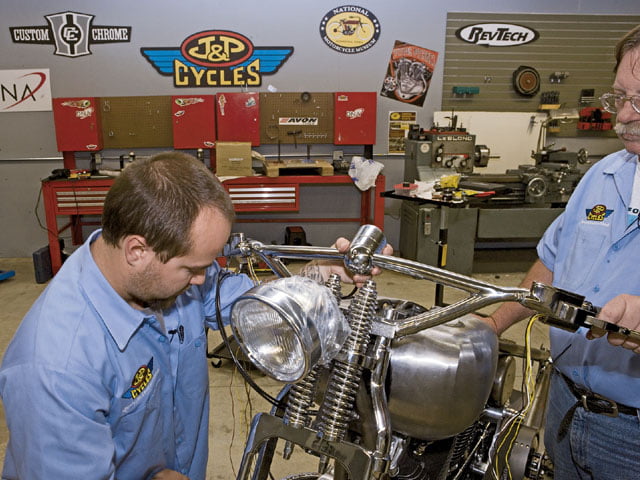 25. To keep the gas tank clean, a Wire-Plus digital speedometer was bolted to the crossmember of the Hollywood bars. This speedo utilizes a rear-wheel sensor to calculate speed.

Located in Anamosa, IA, the National Motorcycle Museum caters to people who love motorcycling. Since 1989, builders, racers, and riders have passed through its doors to view the history of motorcycling, with bikes in the museum’s collection dating back to the dawn of the 20th century. A main goal of the museum is to preserve the past and educate the public about all things two-wheeled while fostering passion for current, past, and future riders and spectators alike. In just the past few years, the museum’s bike collection has grown through charitable donations from 40 motorcycles to more than 200. Also on display is a huge collection of memorabilia, antique motorcycle toys, photos, and posters highlighting the (wo)men and machines of past.

Anamosa happens to also be the home of J&P; Cycles, one of the largest mega-retailers in the motorcycle industry. J&P; Cycles produces several mail-order parts catalogs, covering everything from late-model V-Twins to vintage bikes, not to mention metrics as well. John and Jill Parham have grown the company from one employee in 1979 to more than 200 today. John has always supported the efforts of the motorcycle community, being elected to the Sturgis Motorcycle Hall of Fame last year.

For the second year in a row, J&P; Cycles, along with other industry sponsors in conjunction with HOT BIKE, is building a custom motorcycle and donating it to the National Motorcycle Museum. Upon completion, the bike will be raffled off, with proceeds going to support the museum. The basis for this year’s bike is a Milwaukee Twins rigid frame by Kraft/Tech cradling a CCI RevTech knucklehead motor. Most of the parts for this build came right out of the J&P; catalog, with parts donated by Performance Machine, DNA, Avon, Goodson, Wire-Plus, Dakota Digital, Tedd’s Cycle, New York Custom Choppers, Crocker MC Co., and Jammer. Follow along as we take you through the build, then present the finished bike in an upcoming article. Last year’s Retro Panhead (featured in HOT BIKE Vol., 38, No. 7, 2006) was won by Mike Seneski of Palmdale, CA.

The drawing for this year’s bike is December 27, 2007. Winners need not be present to win. All donations to the museum are tax-deductible and help create new exhibits, obtain new bikes, and assist with general operations. In fact, the money raised last year helped build a recently opened re-creation of an early 1900s motorcycle workshop. More information on the museum and getting raffle tickets can be found at www.nationalmcmuseum.org or by calling (319) 462-3925. A link to the museum can also be found on J&P;’s website (www.jpcycles.com).

As with any ground-up build, the J&P; crew had to mock up all of the parts before final assembly. This is to ensure everything fits together, both mechanically and visually. After mockup, the whole bike will be disassembled, followed by powdercoating and/or painting of the frame and sheetmetal.

Come back next month, when we’ll show you the rest of the mockup, including the wheels, sheetmetal, trick seat, and custom-made exhaust-along with finishing touches-before presenting the finished product.