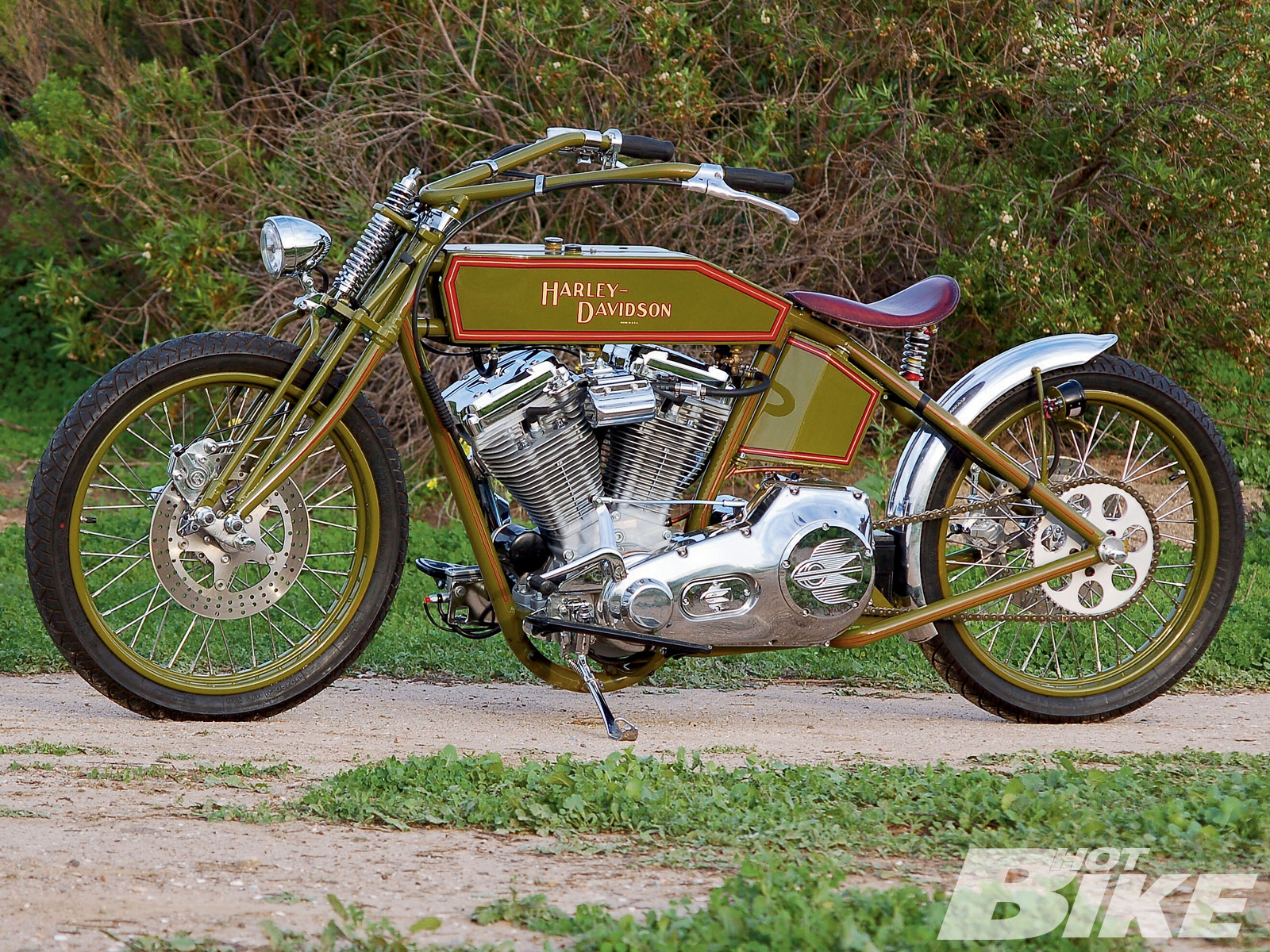 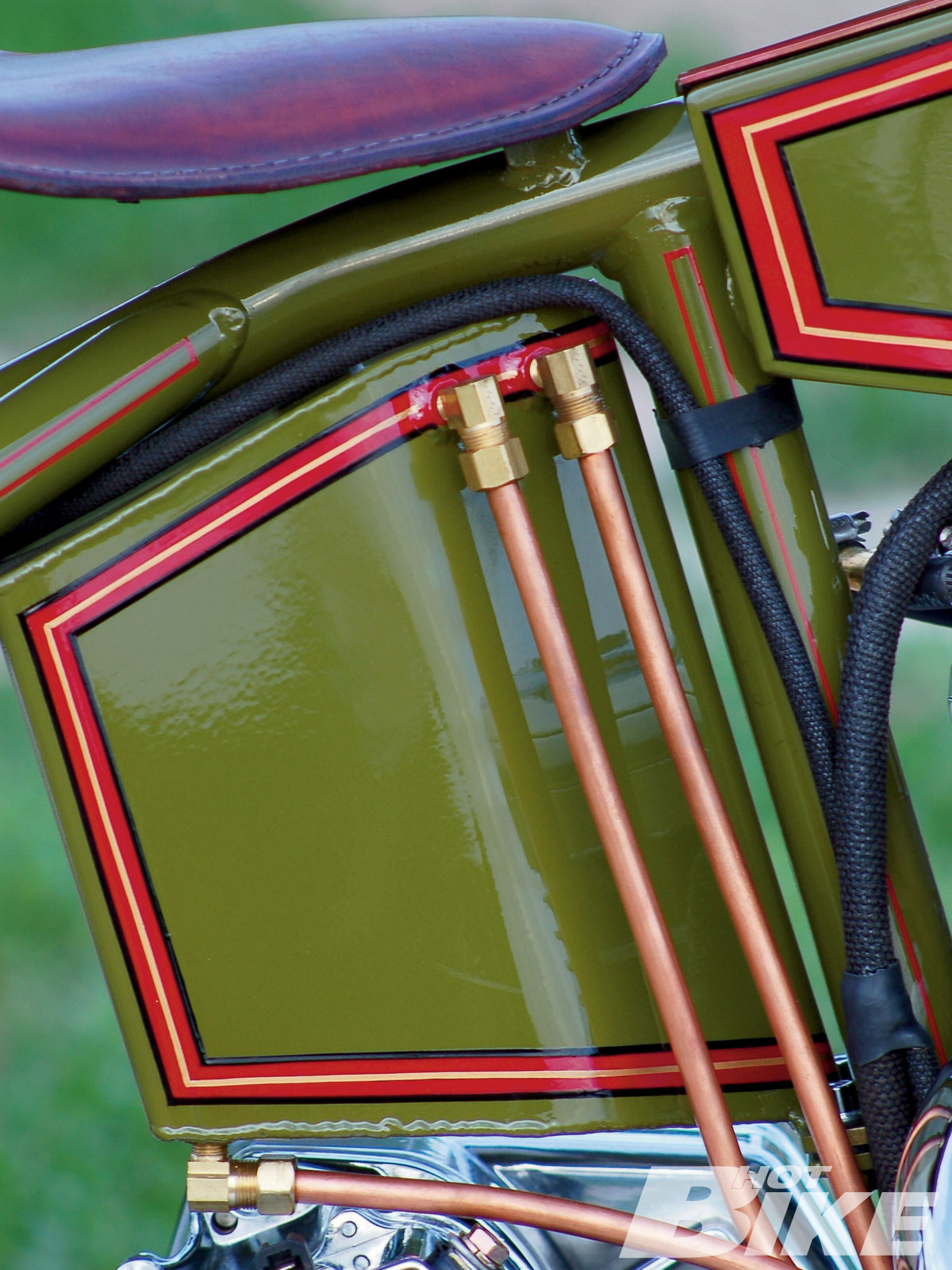 Copper oil lines and the clothe-wrapped electrical add to the vintage look of the bike. 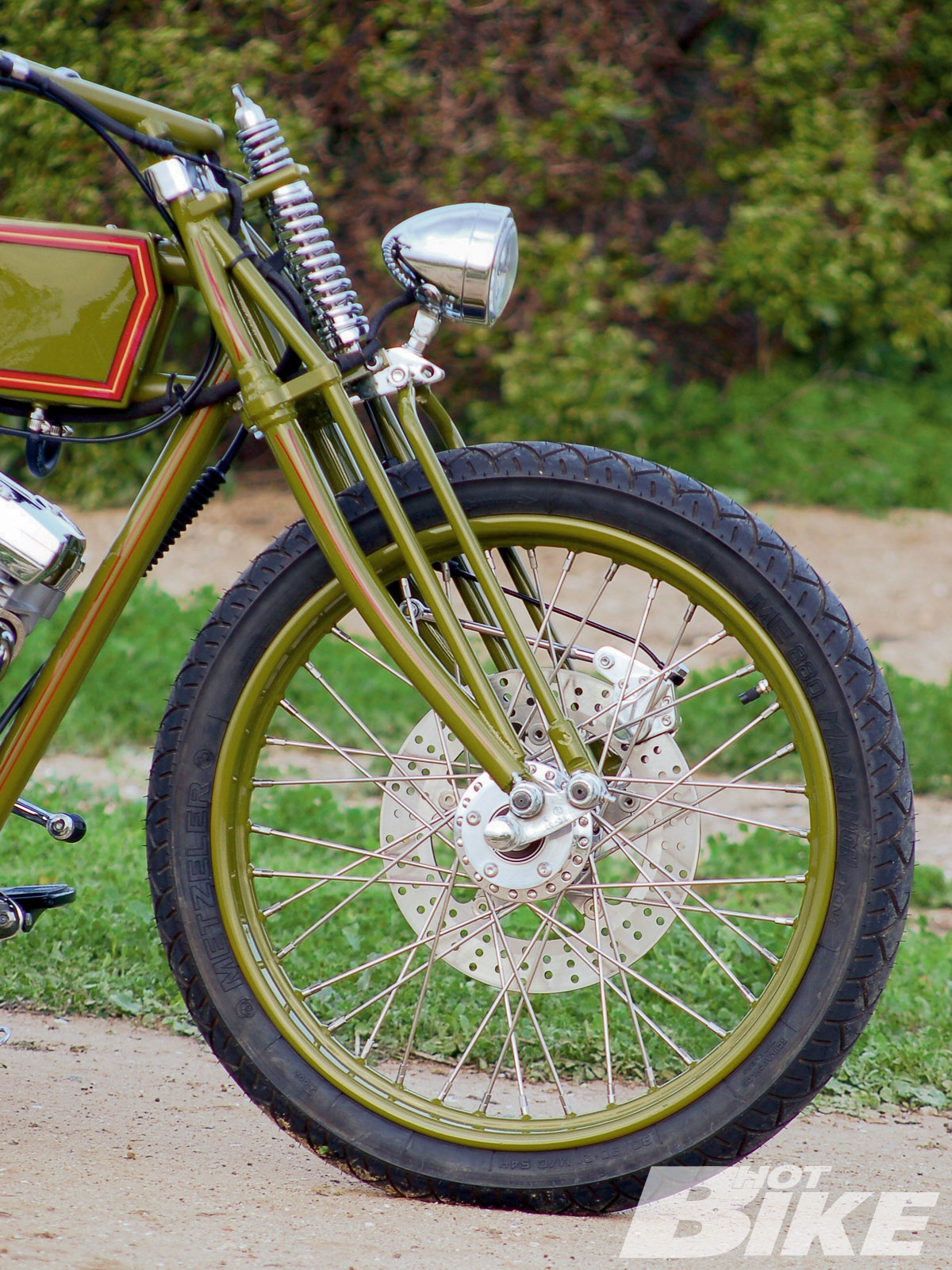 Unlike most spinger frontends with the rockers setting behind the axle, the rockers on the USC springer are in front of the axle. 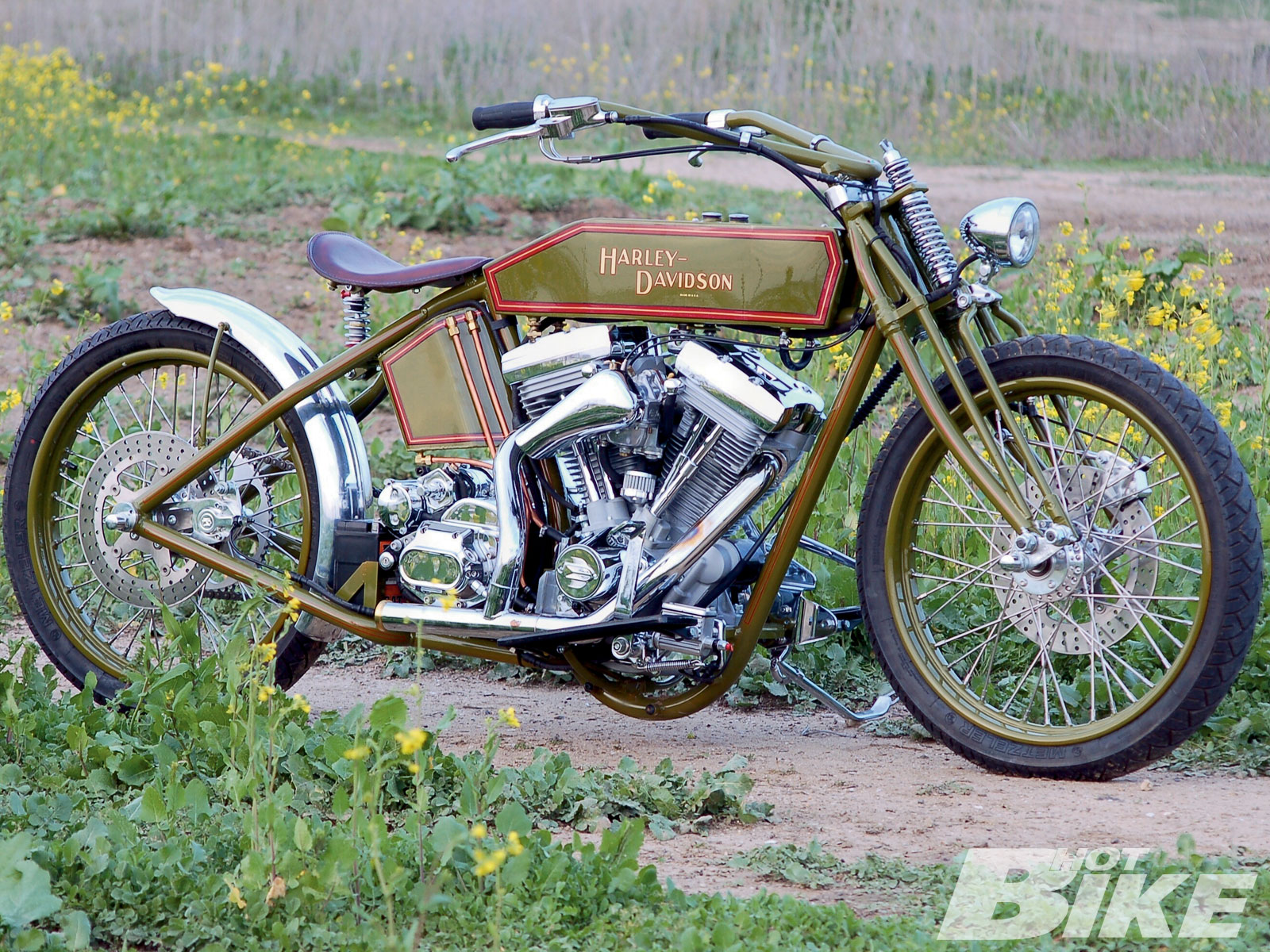 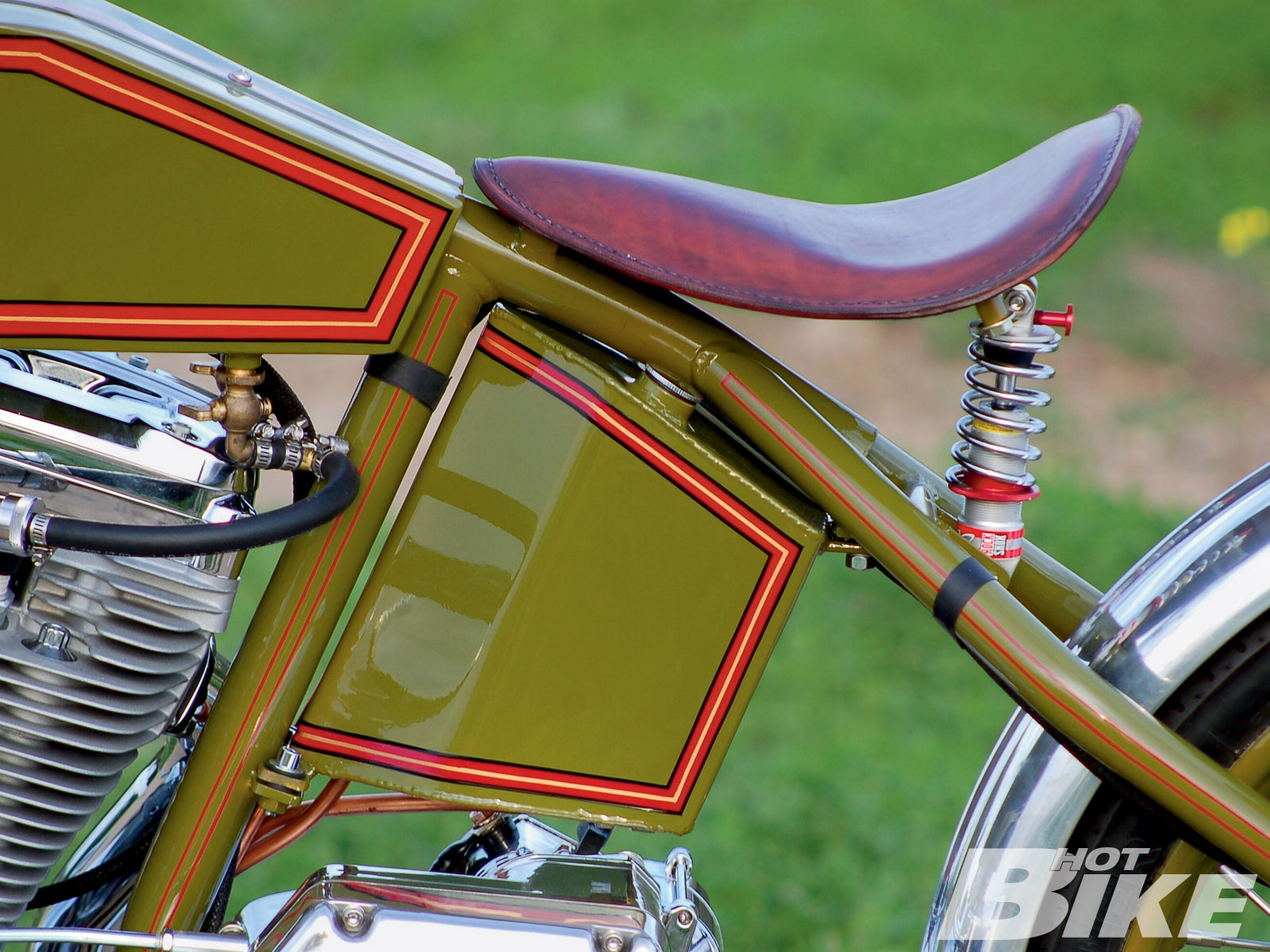 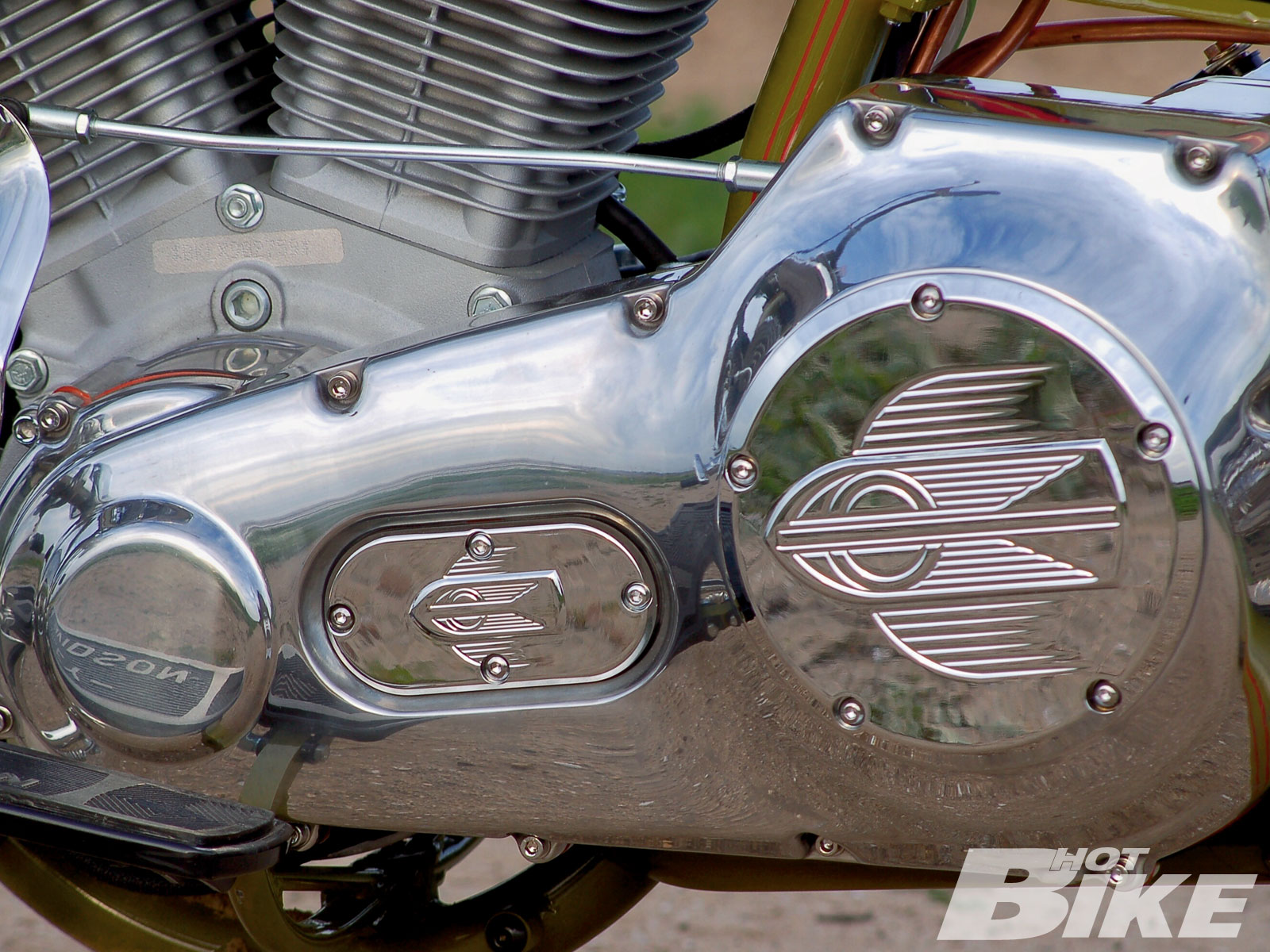 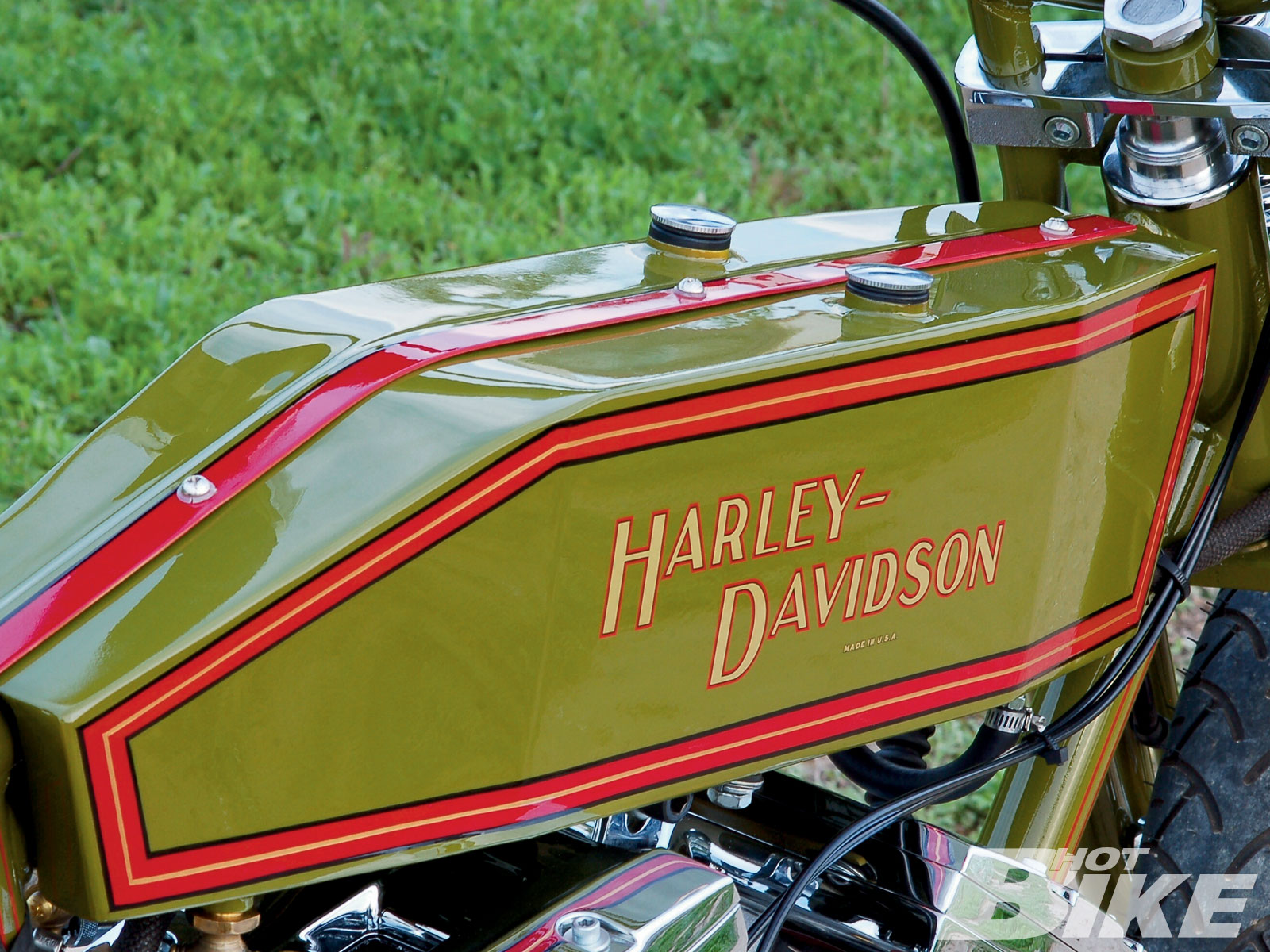 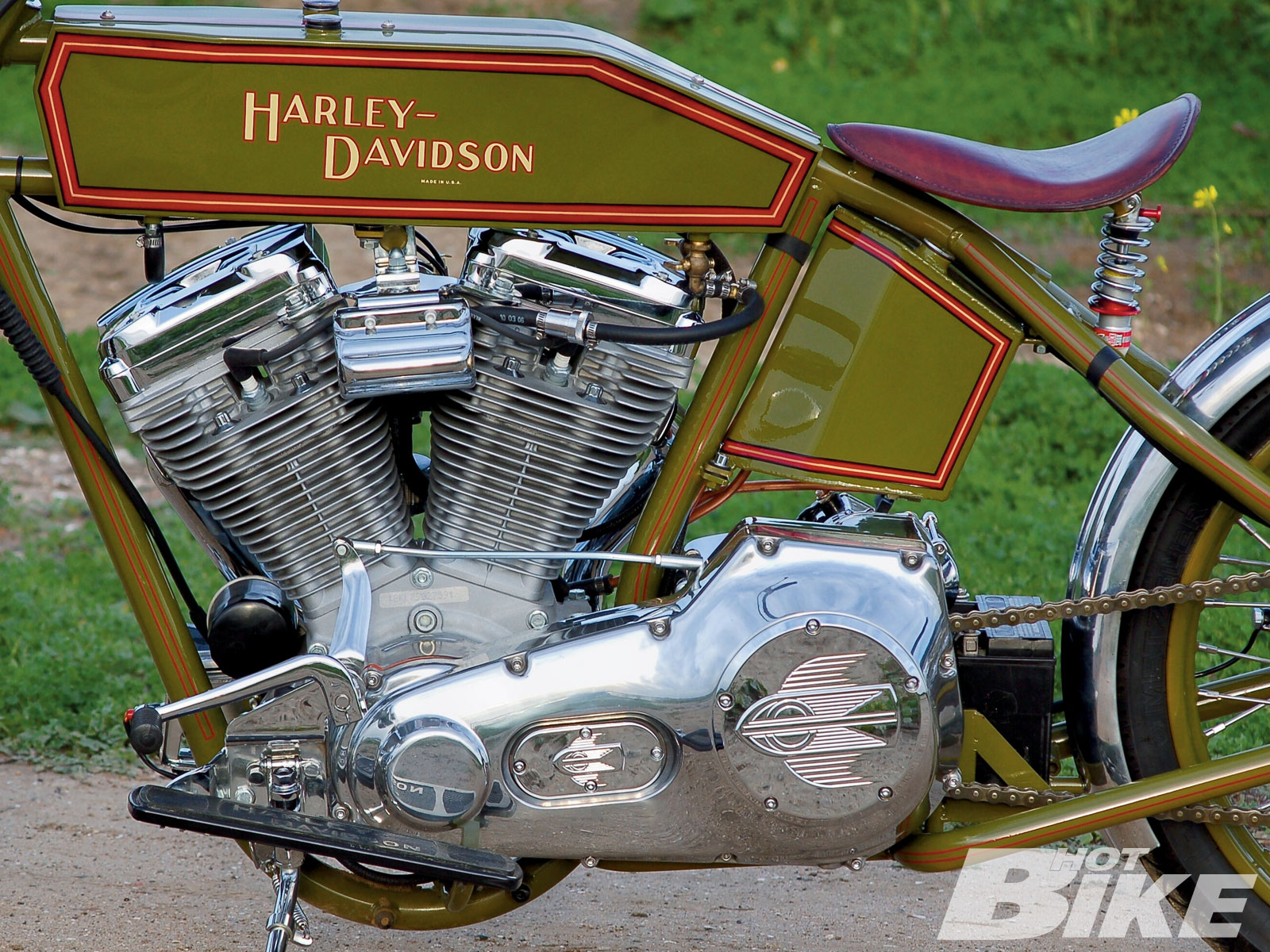 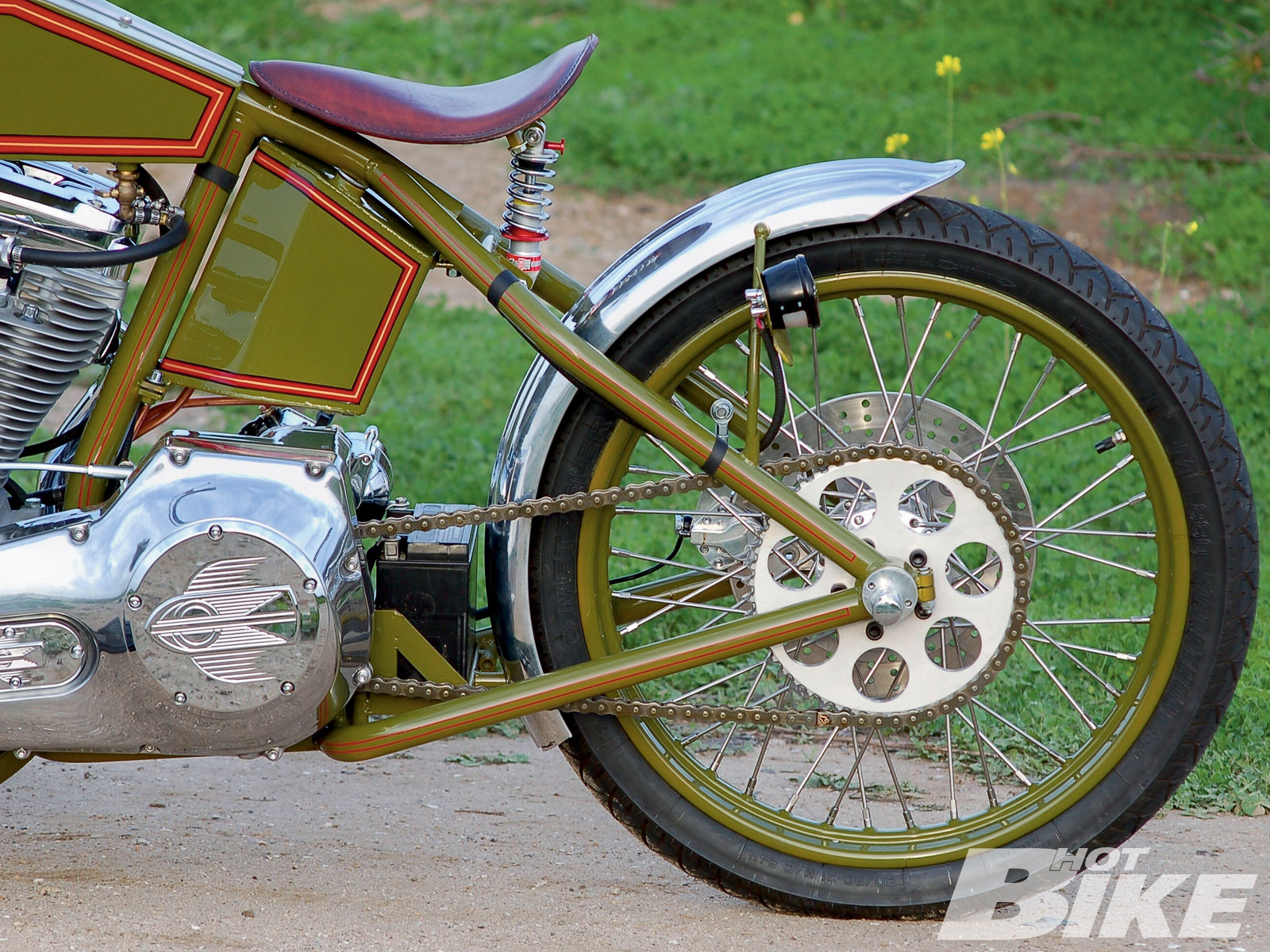 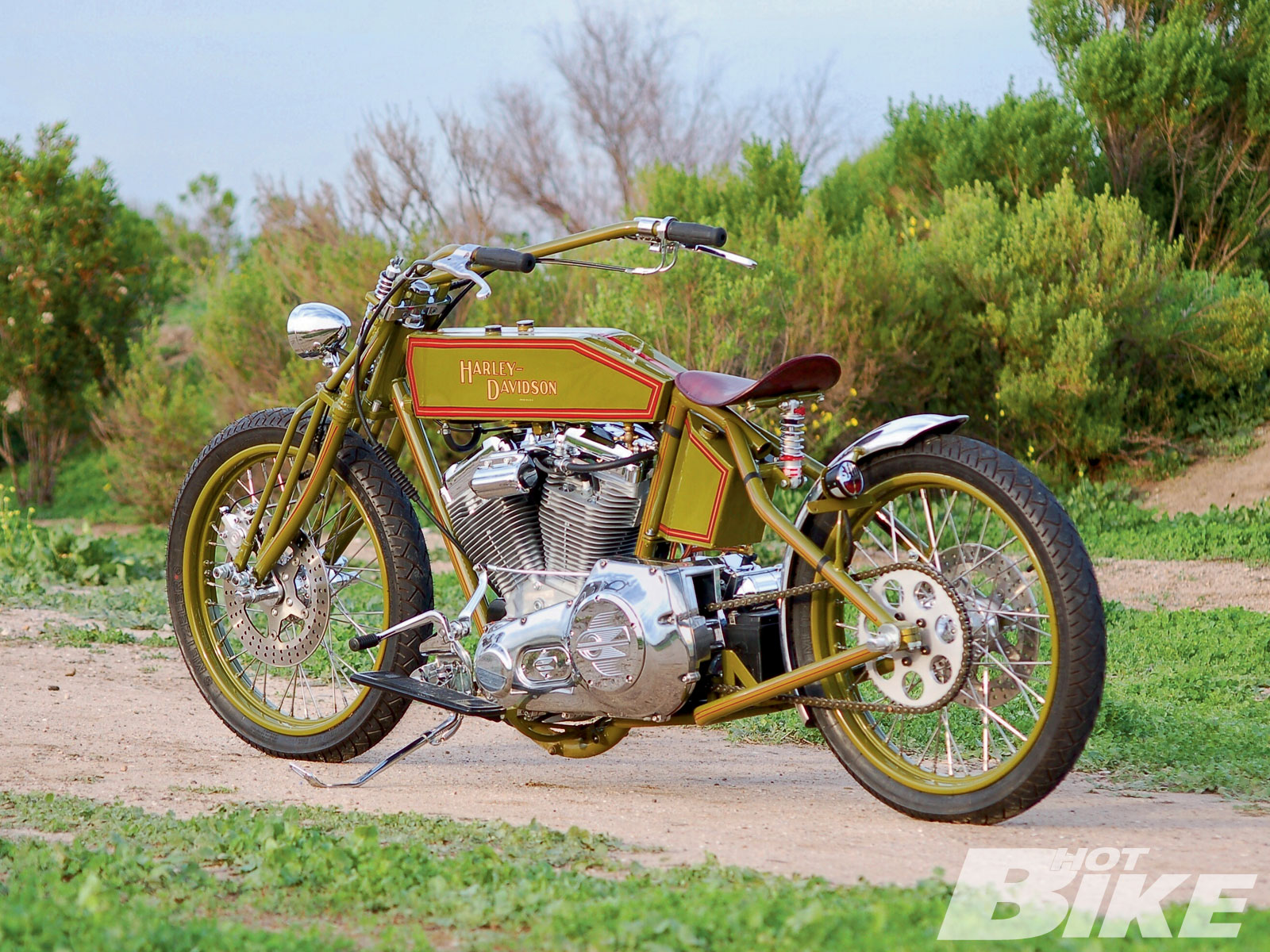 Some words just don’t belong together in the same sentence. Mismatched pairings that come to mind include: military intelligence, happily married, tax cut, and to borrow from bike builder lexicon, universal fit. Be honest, how many of those one-size-fits-all parts have you used that actually fit on your bike without you having to do a little whittling at best, a bunch of welding and grinding at worst?

The quest to offer universal-fit parts for its new Retro Factory Racer kit prompted U.S. Choppers (USC) to build the bike you see here. The plan was to check that all proprietary parts fit as intended. As a rule USC’s primary product line consists of bike kits that resemble old Harleys using late-model Harley drivetrain components to get the finished bike on the road. That means tailoring USC’s new old-looking components to work with various new (read: Harley-Davidson) parts that might be added on during a custom build. “The typical client wants to know that he, or his chosen shop that will build the bike, will experience few complications to complete the build,” USC’s Rick Krost pointed out. “They don’t want surprises, especially if it means more time and money to complete the bike.” So USC decided to construct a complete bike as the Retro Factory Racer kit components were developed in the shop. As each new kit part was completed, it was put on the bike, joining various OE replacement parts that originated in the Harley-Davidson catalog. Think in terms of a married couple solving their problems on a day-to-day basis, or witnessing Congress actually mapping out an equitable tax-and-spend policy to create a balanced budget.

But Rick was quick to explain that while he followed USC’s standard operating procedure of shoehorning a new Evolution crate motor into the proprietary rigid frame, he broke tradition to use a new Baker five-speed transmission in place of the standard Harley tranny normally found on the shop’s customer bikes. “I couldn’t resist the pure beauty and function of the Baker five-speed for this build,” he reasoned, adding that the Baker box not only lends to the bike’s retro appearance, but it shifts smoothly through all the gears, too. You might say that, in this case, function and form shared equal billing.

Because the Factory Racer chassis features USC’s new (and oh-so-old-looking) reverse-trail frontend, gas tank, and oil bag, many of the other components consisted of proprietary products, too. “This makes the bike a ‘custom’ in the truest sense of the word,” explained Rick. “We started with a proprietary frame and worked outward, developing components along the way.” And so each part was hand-built as required while the bike took shape.

Perhaps most notable among those peripheral custom components are the footboards and foot controls. “To keep with the theme-and to utilize OEM parts in the process-we elected to use OEM footboards from the ’30s with OEM Shovelhead shifting and braking plates and levers behind them. Everything bolts right up,” Rick said.

But within a few weeks of starting the project, Rick encountered a minor problem, a potential (USC) customer caught wind of the bike and offered to buy it. Since the bike’s original mission was to serve as a prototype for a new line of USC parts, Rick agreed to sell it on the condition that he retained full control on all that went into the bike itself. That meant selection of parts and color of paint. “He agreed, so we went ahead with the project. I assured him that I would build it as if it was my own-after all, this represents my product line and business,” stated Rick.

That minor matter handled, Rick continued his search for the right color. “I wanted olive green. I knew it would work with this bike-I’ve dabbled in vintage iron for more than 20 years now, and this was the color it had to be,” said Rick. Two weeks later, after scouring paint codes and color charts, he found the right shade of olive green. “I shot the rims and ran them to Buchanan’s to lace the Performance Machine billet hubs to the Performance Machine spun-aluminum rims.”

The period-perfect paint color was incomplete, however, without the right graphics. Krost consulted his pinstriper for options and he was told that small graphics seldom worked well with gold-leaf paint. So Krost sacrificed a set of NOS transfers-vintage 1916, to be exact-from his personal stash to serve as templates for a supply of replica decals. “After blocking the base coat, I airbrushed the red stripes on and applied the new Harley transfers, then applied three coats of clear before handing the tanks over to Ken the pinstriper,” Rick said, adding that he now has a big supply of replica decals!

Rick encountered one final hurdle in the build. It turns out that the customer had a bad back, and a low-slung boardtrack-style handlebar would cause him problems. Could Rick mount tiller bars instead? As you can see, Rick put a spin on the handlebar selection, and the end result is a bike that looks like it rolled right off the original Milwaukee assembly line, with one major difference-this bike is powered by a modern Evo engine. The result is a new-old bike, if you will. Now if Congress would only give us a tax cut, many of us could be happily married.