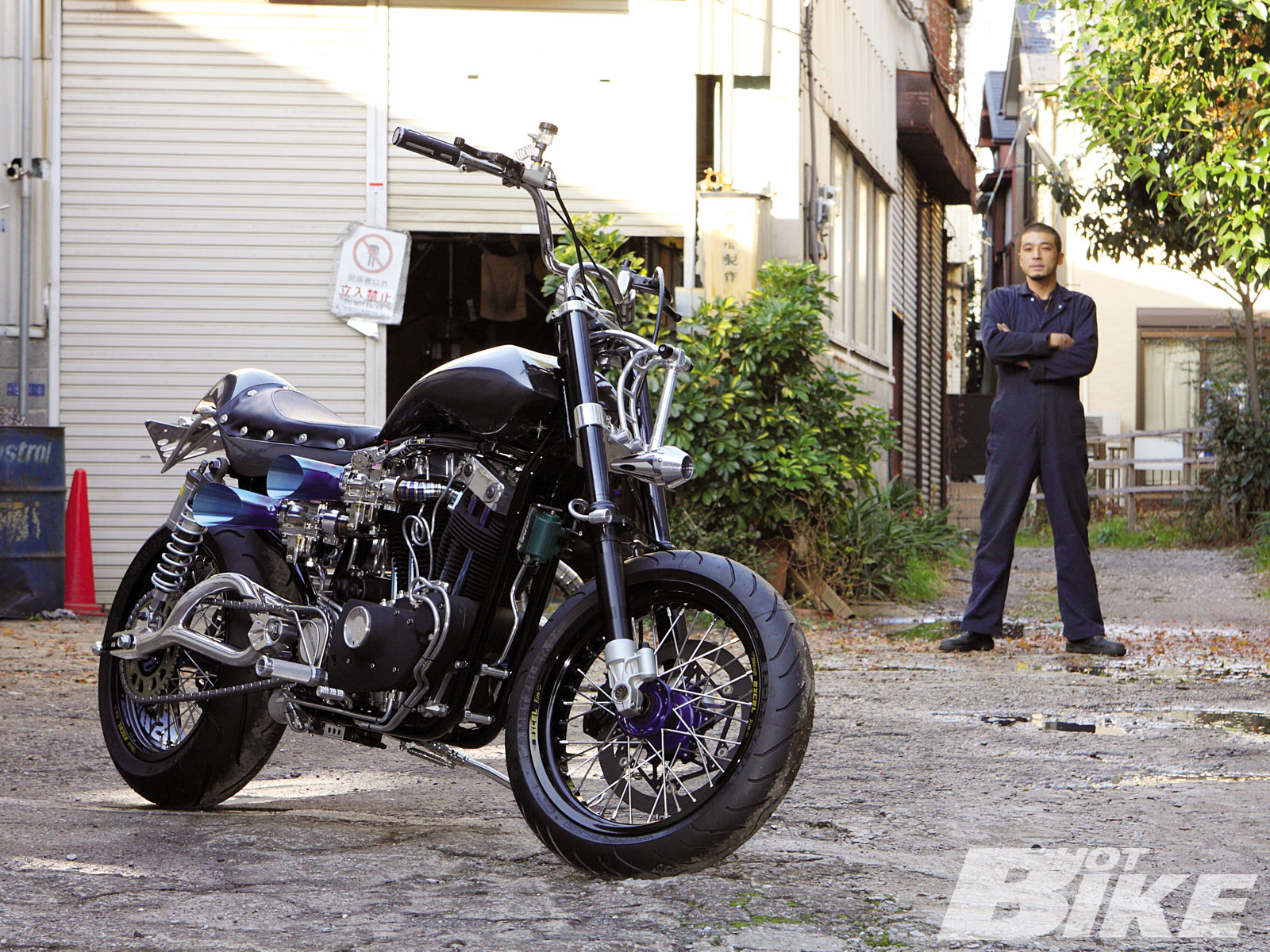 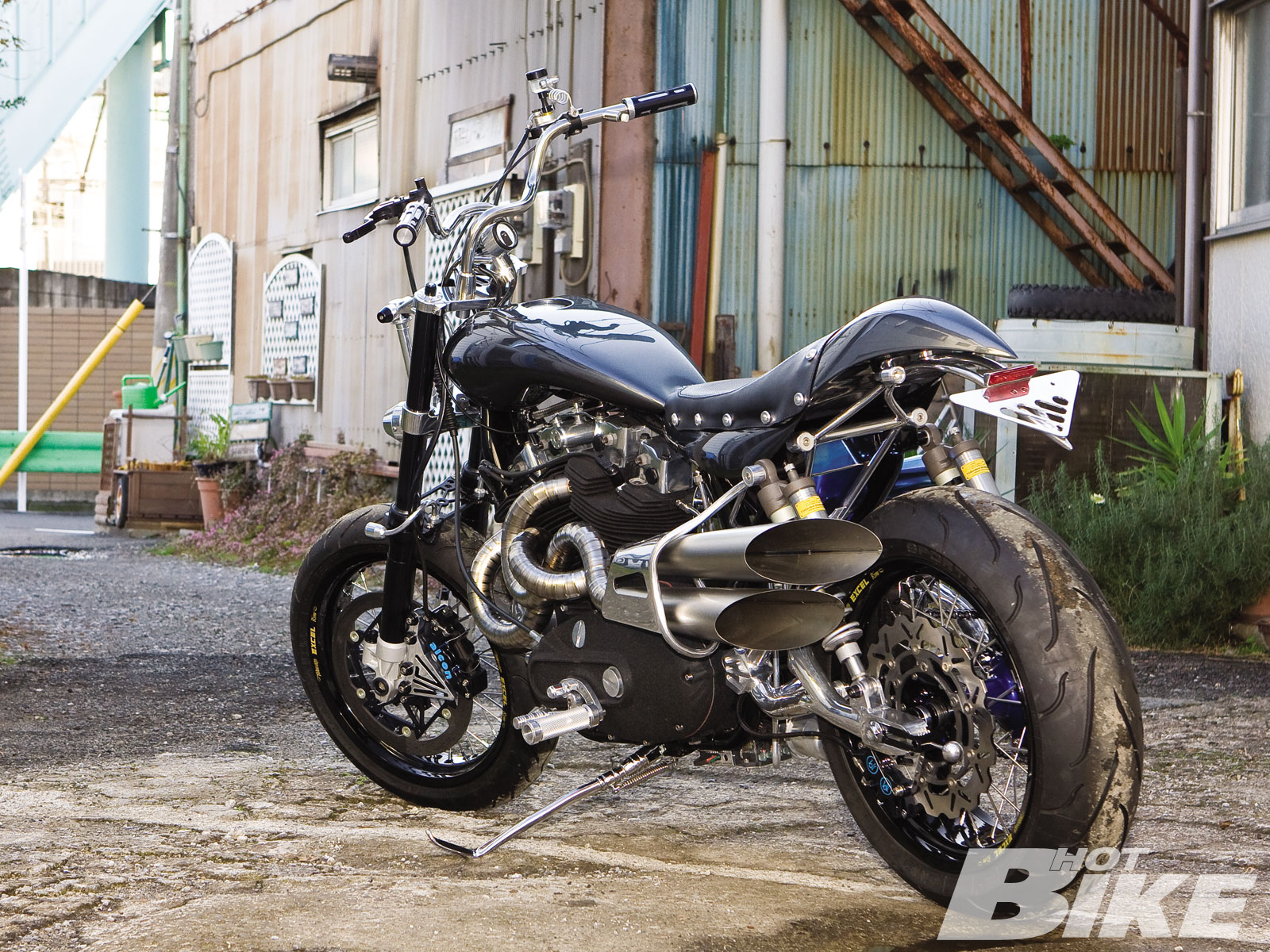 The support that Koji fabricated for the underside of the rear fender also has the rear LED turnsignals and license plate holder incorporated into it. 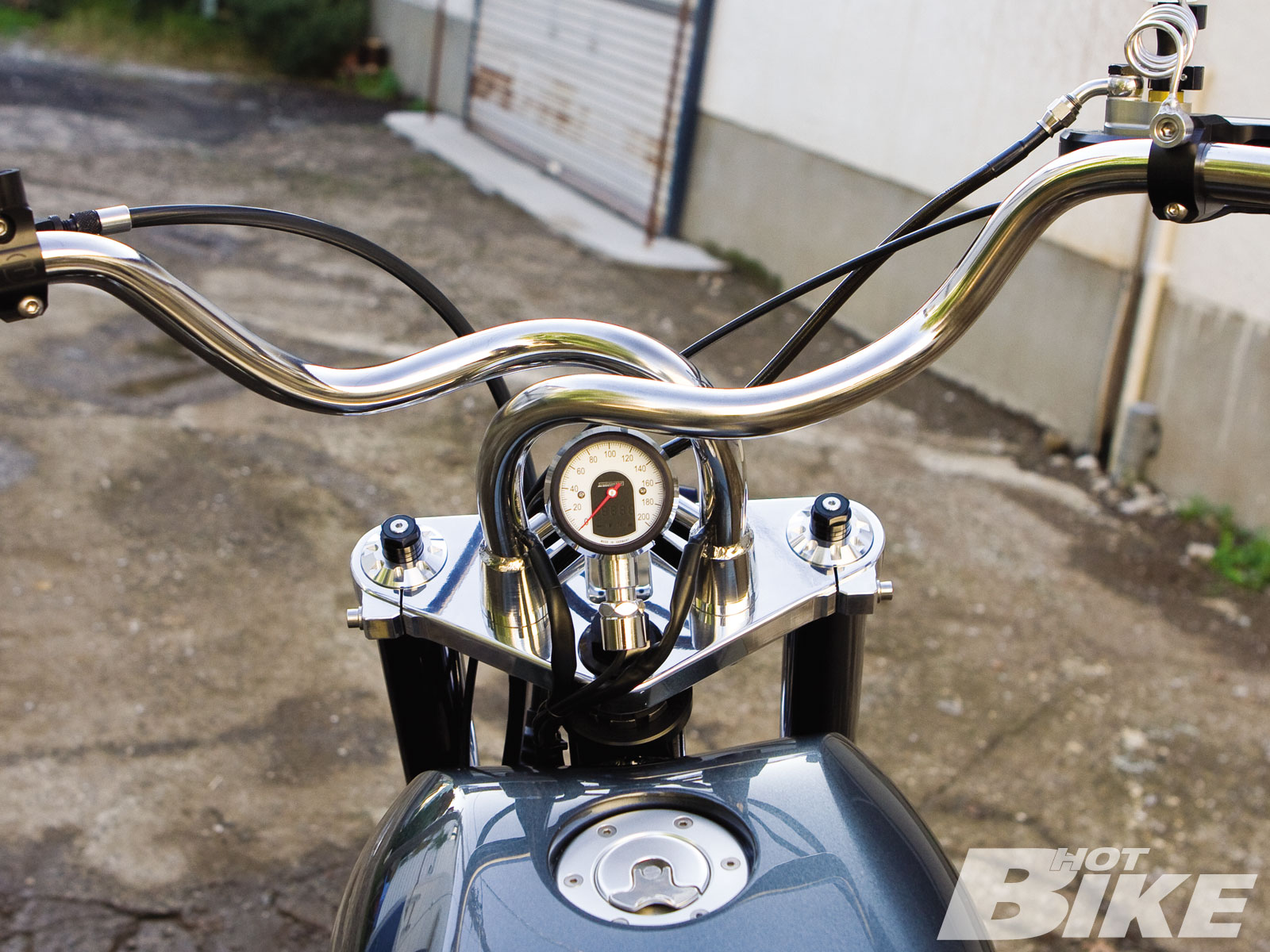 Criss-cross. These are definitely unique bars that flow with the twists and turns all throughout the bike. 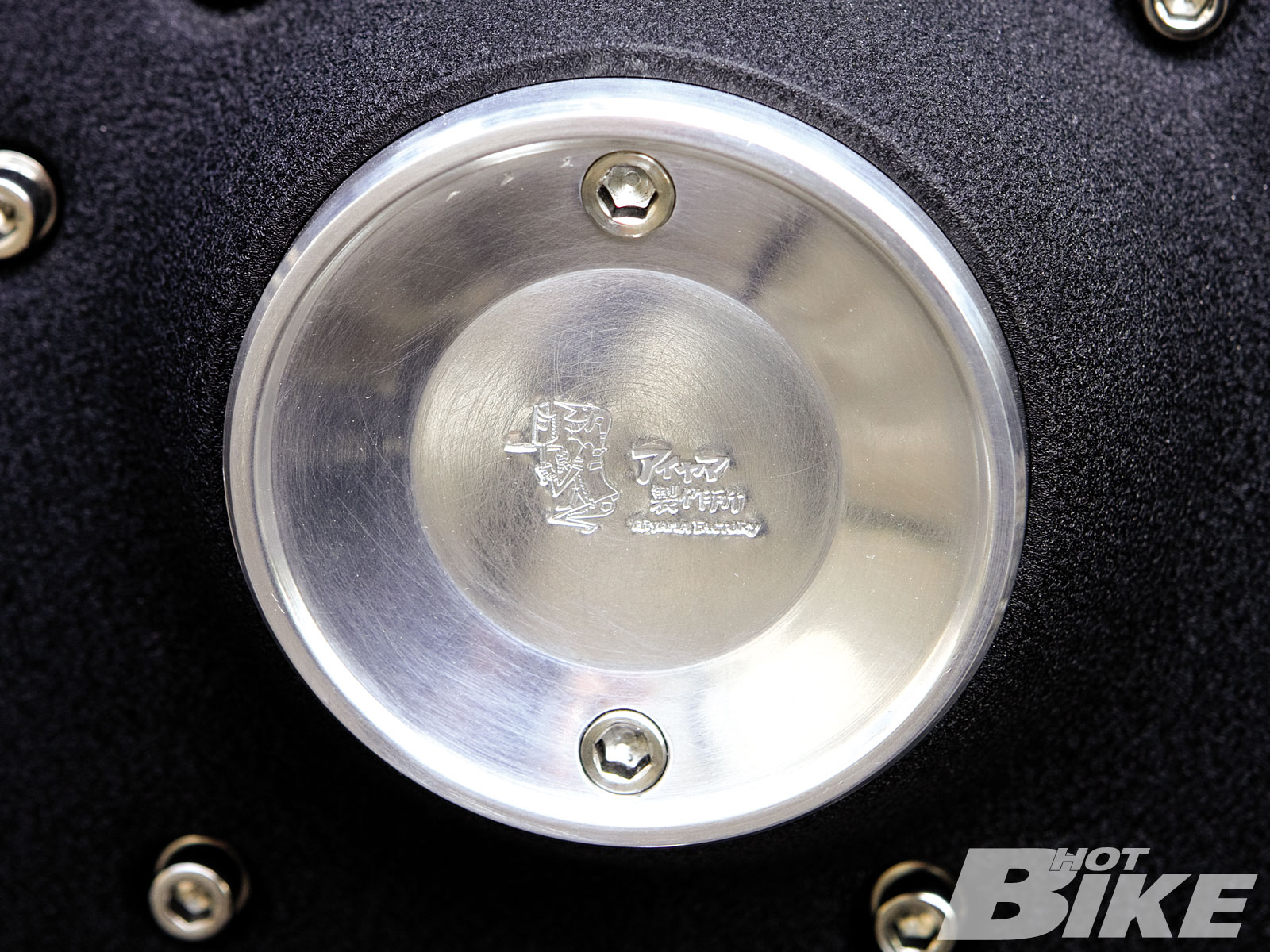 Koji’s stamp of approval is found on the timing cover. 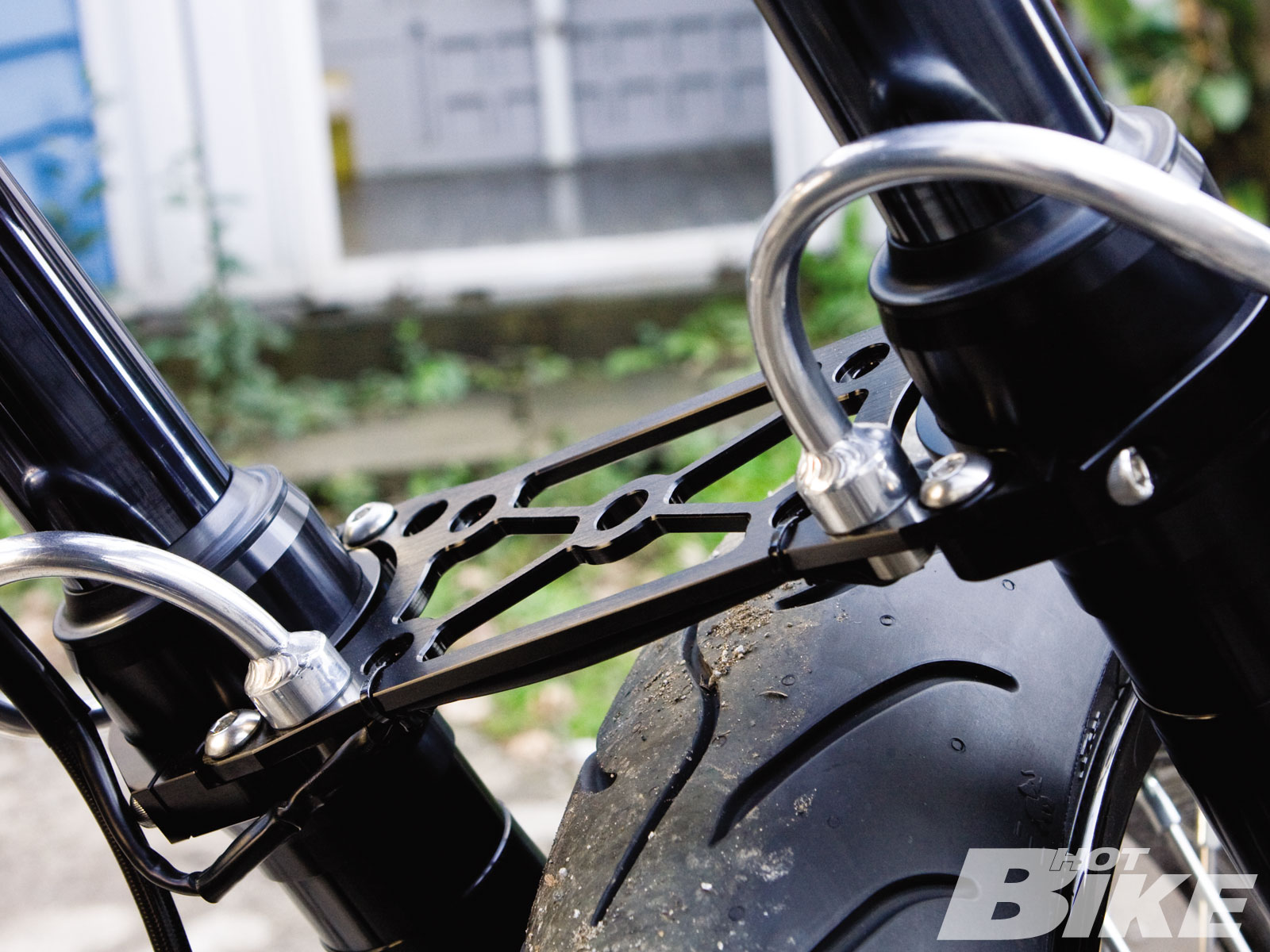 Koji fabricated this fork brace that also supports the front LED turn signals that wrap around the fork legs. 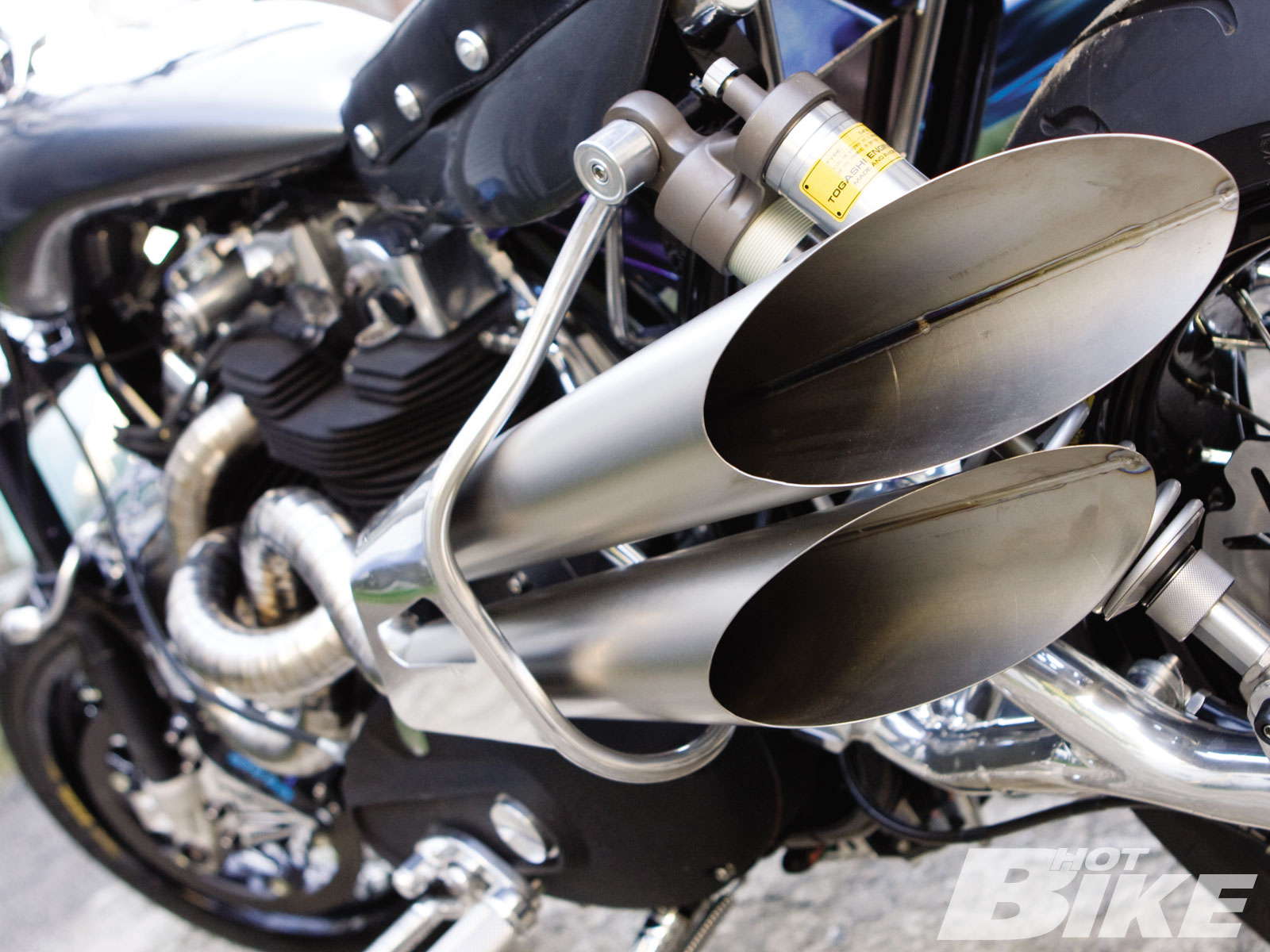 “The suspension has been updated from the 1984 items, and the swingarm is yet another impressive Koji creation. For a neat touch, the chain passes through it and the pivot point on the frame is another billet piece Koji made.” 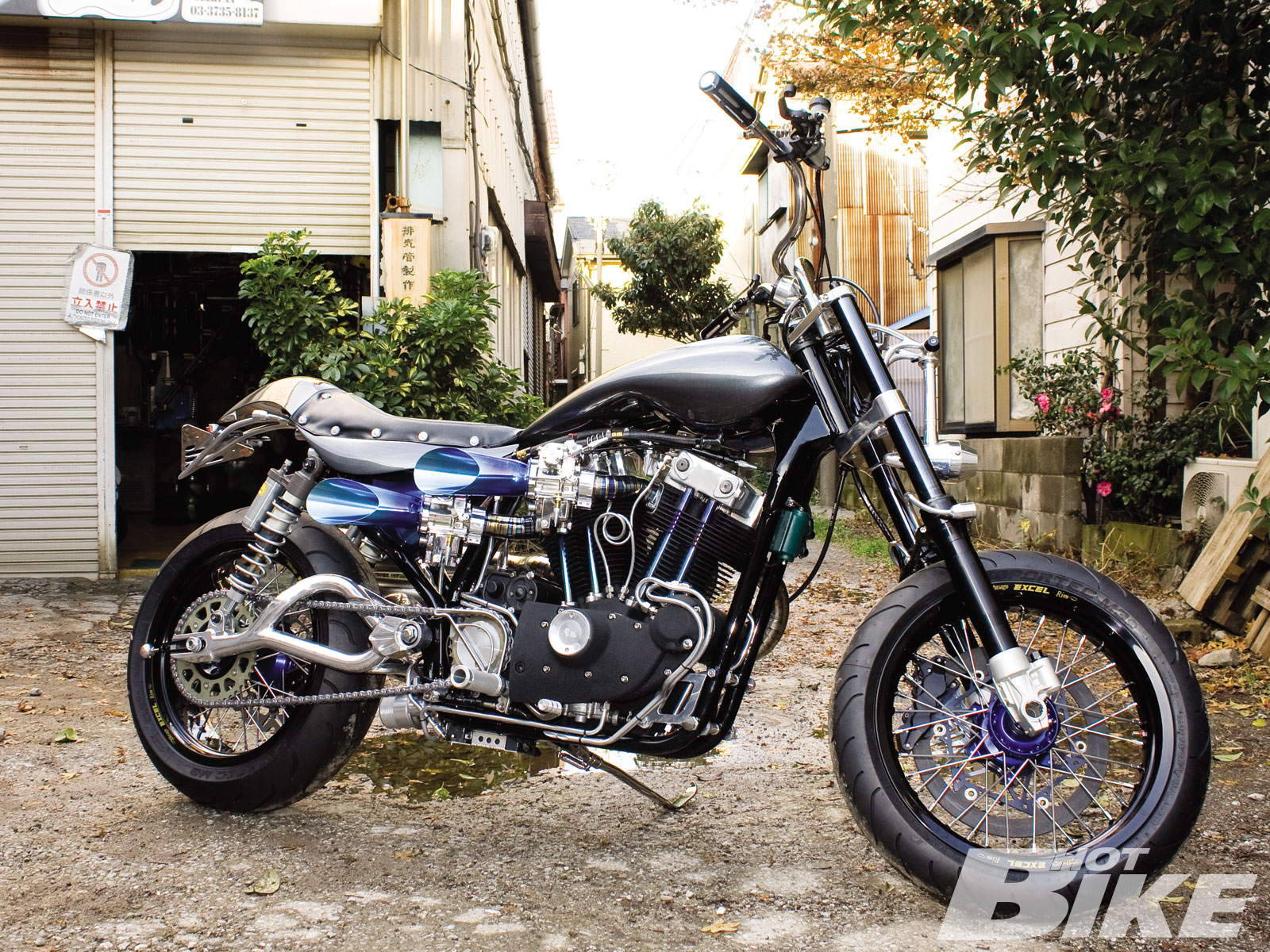 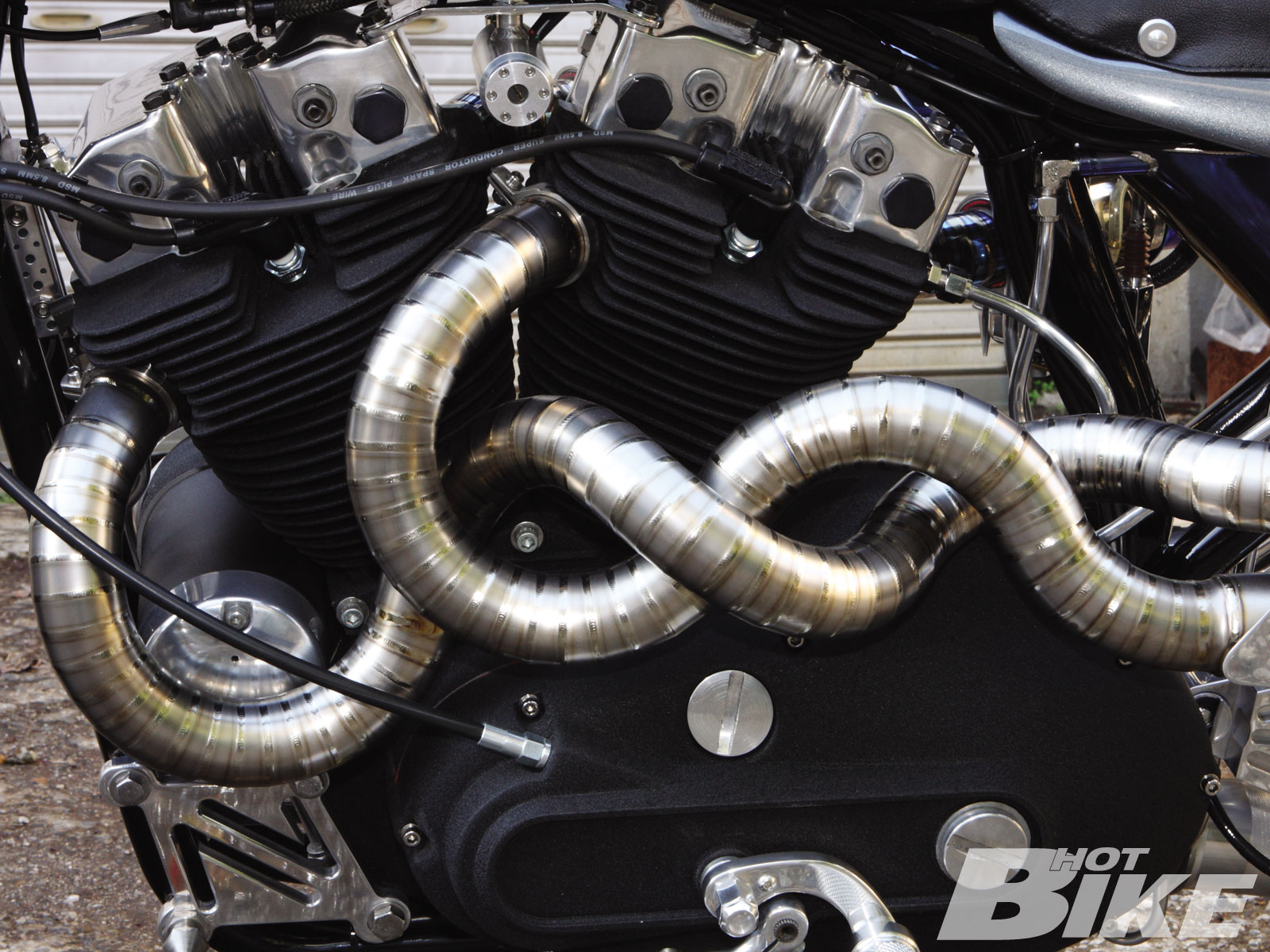 You can see each individual piece of the exhaust that Koji painstakingly aligned and welded together. It does give the exhaust a very dramatic effect. 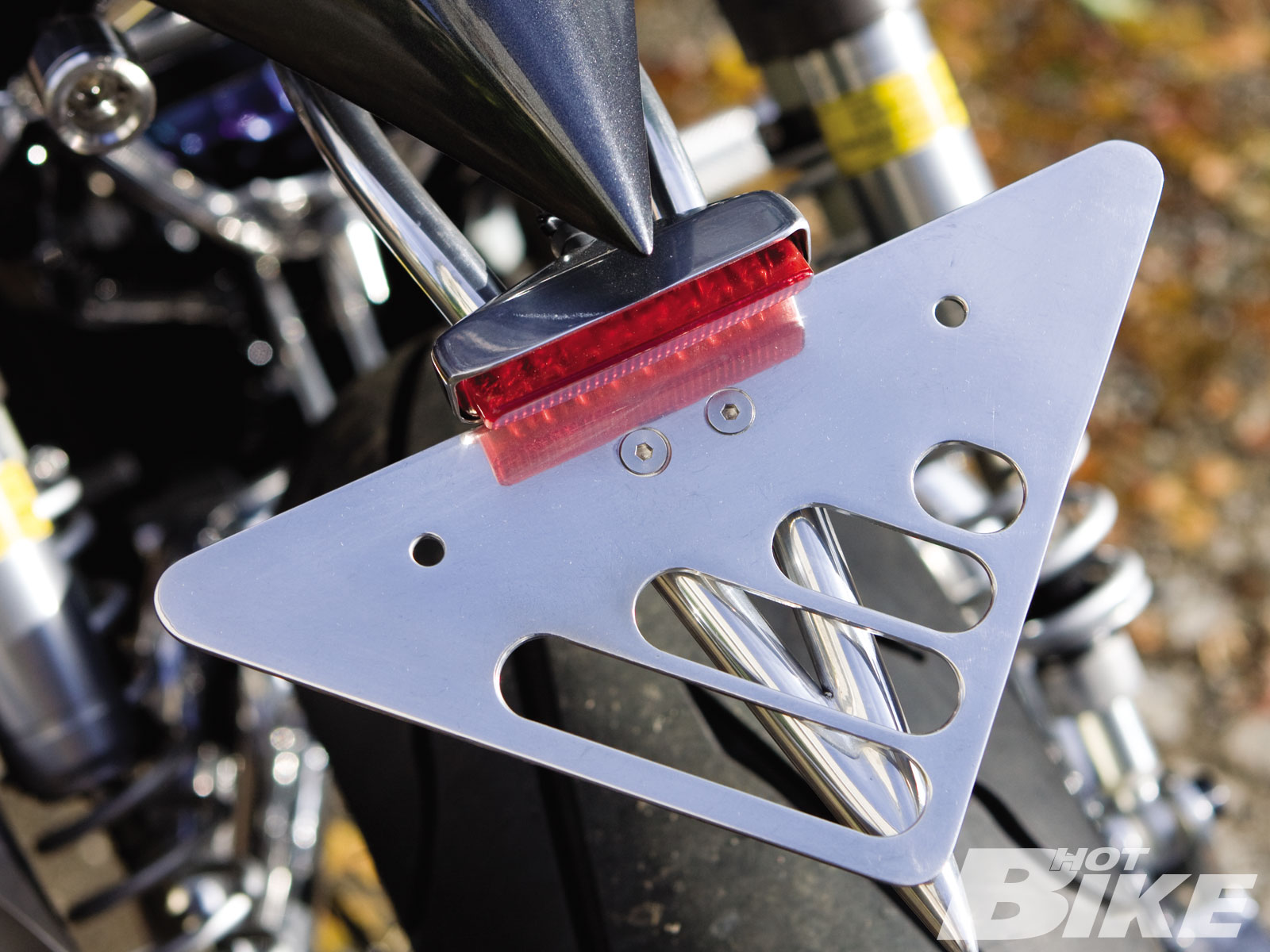 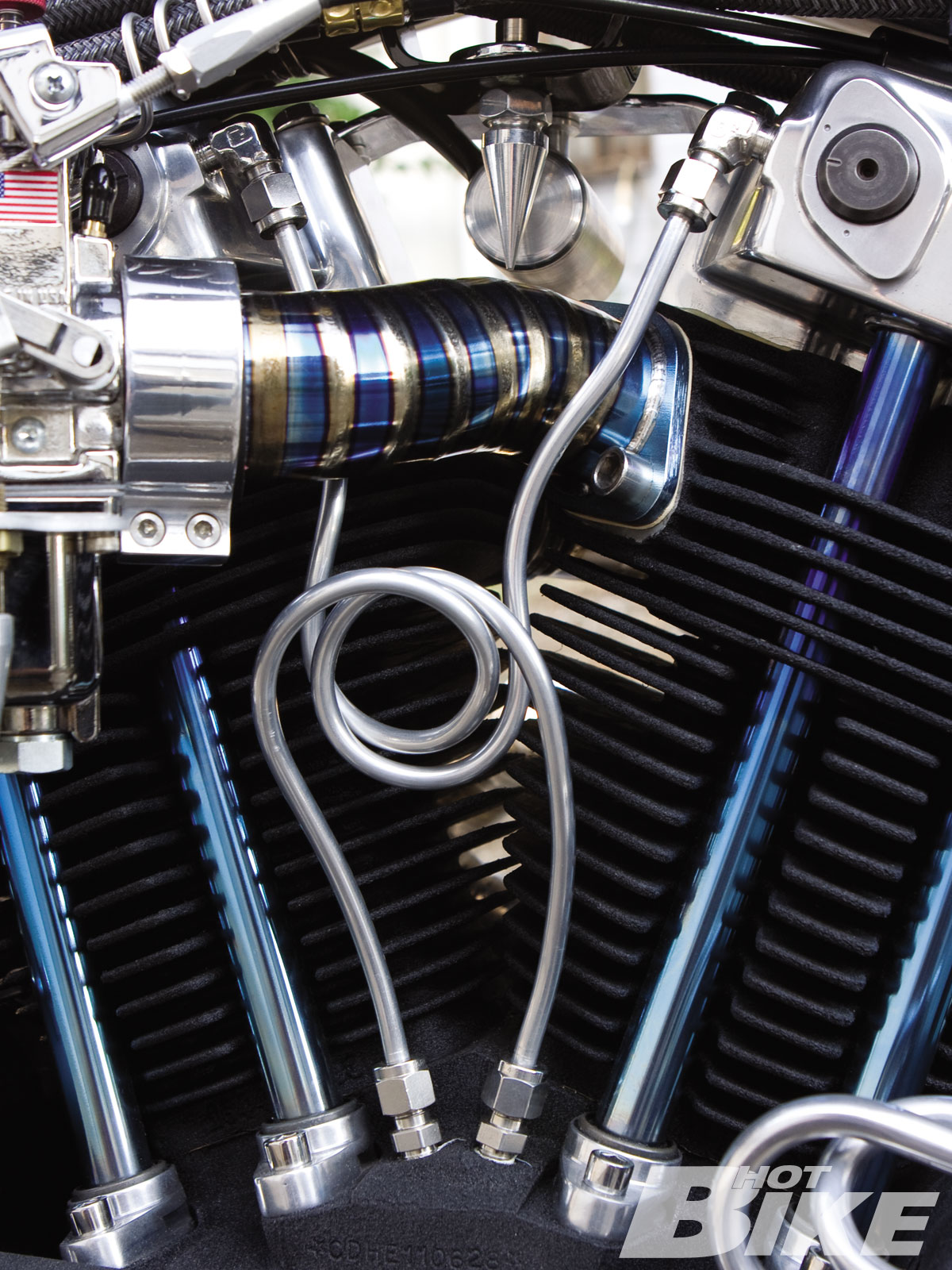 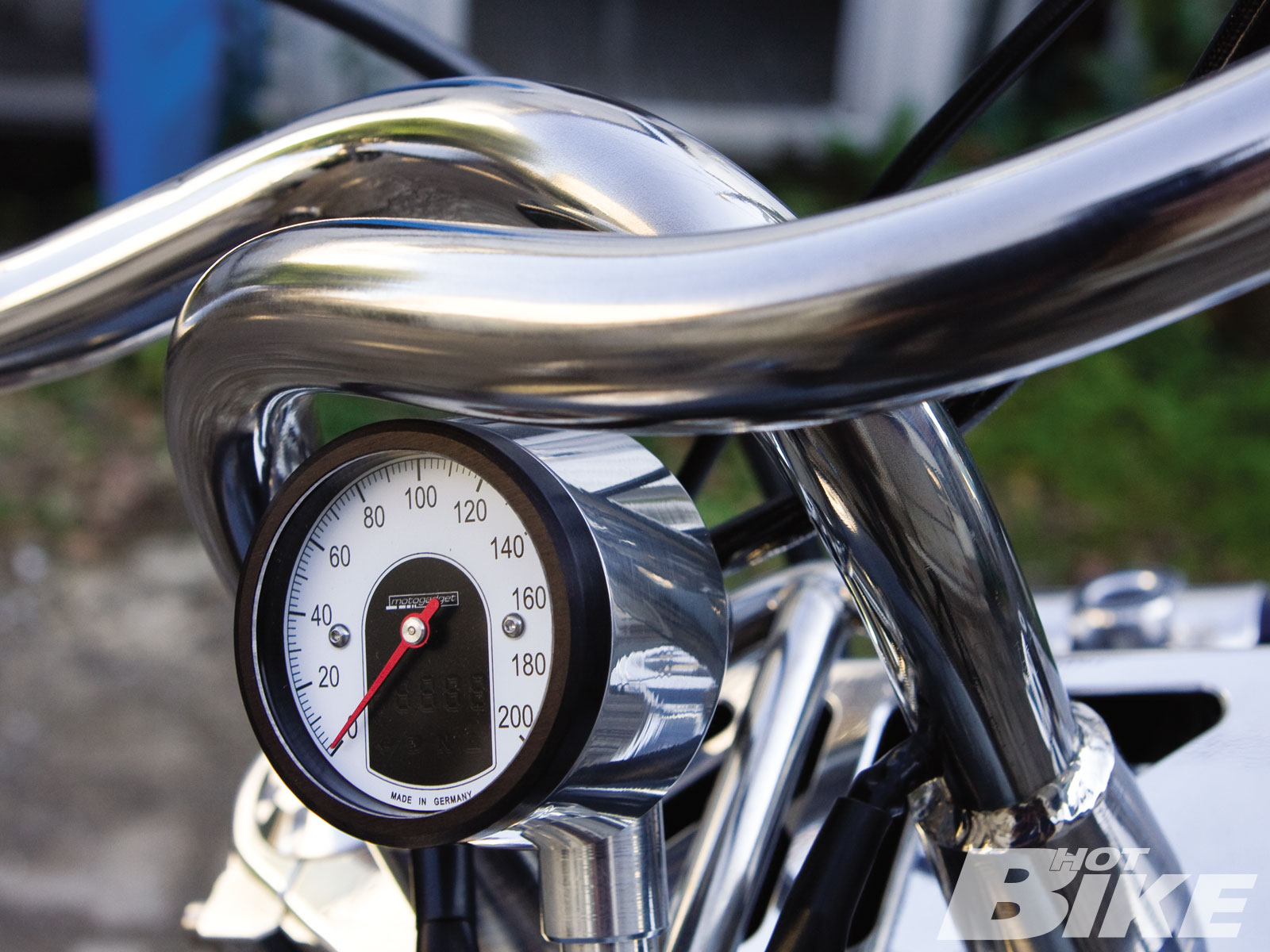 Koji Aiyama is an eccentric. He’s married to the job. He spends almost every day alone in his workshop running his car and bike modification business from morning to late at night. While for many people this might be overkill, it’s this kind of dedication that produces amazing things. So what exactly has he created? Only one of the wildest and most unexpected Harleys we have seen come out of the East for a very long time.

Koji’s specialty is metal work. This helps explain why everything outside of the engine block is a mix of custom and awesome. As a business owner, he concentrates his activities on exhausts, manifolds, and just about anything else you can turn, weld, or polish. When this is your bread and butter it helps if you can show prospective customers just what you’re capable of. The decision was made to go old-school, and thus, Koji soon got his leathery hands on a bone-stock ’84 Harley Davidson XR1000. It came complete with leaky carburetors and a mountain of grime, but as both would ultimately line a bin somewhere it wasn’t much drama.

Koji got to work stripping everything off the frame and dropped the engine out to be worked on. Internally the engine is completely stock, but almost everything hanging off it isn’t. Much of this is all about improving the aesthetics, so the heads were polished up and titanium pushrods replaced the stock ones. More titanium was used for the lobster-back intakes which lead to the two beautiful Edelbrook carburetors. These carbies are one of the stand-out features, topped off with matching inlet pipes that are a definite focal point. Oil lines have seen the Koji treatment, with new lines having been bent in a series of twists, while other lines have been bent to navigate around the frame and components. He did all of this with a simple hand-held pipe-bending tool. He also admitted that it’s actually rather difficult to get the complex bends completely perfect, and wasted a fair amount of tubing getting it just right.

The amazing exhaust system Koji whipped up was a very intricate and lengthy process. It took four days of solid work to perfectly weld together 113 pieces of metal. It’s hard to disagree with the uniqueness of its final look and the quality of the welds is very impressive for someone who isn’t a machine.

Keeping the engine attached to the frame are decorative custom solid mounts which are undoubtedly some of the many small features that are easy to miss when confronted by the bike as a whole. Also falling in this category are the foot controls, the sidestand, and the engine badge, all of which were created from scratch. The seat, while looking quite smart, was actually very simply made with some foam being covered with leather and screwed into place. Despite its apparent thinness, Koji says it’s comfortable enough.

Naturally on any serious custom bike the fuel tank has to be special, so the standard item was never going to earn its place here. Koji turned to his best friend, aluminum, and created a sleek, smooth tank that is so understated it’s almost overlooked by the other custom parts that surrounds it. The fuel cap was tastefully sunk in and the whole thing was painted gunmetal by a shop called Towa Body.

Towa Body wasn’t the only partner on this bike. Koji enlisted a friend who specializes in electronics to make the lighting on the bike. The front and rear LED indicators are quite hard-to-notice LEDs and they are mounted on aluminum rods and frame work. The headlight was actually created by Koji from billet aluminum on the lathe, and like many parts of the bike, chromed for the necessary shine.

On a bike this pretty there will always be compromises, and in this one’s case it’s the turning radius. There will be plenty of three-point (or more) turns in this bike’s future and doing this turning is a set of handlebars that deserves a closer look. Koji tells us, “I was trying to be truly unique on this bike and incorporate features you just don’t see on other machines. I’ve never seen handlebars like this, so I decided to make them myself. It took a bit of adjusting, but the final position feels pretty good and it should be comfortable to ride”.

Riding is one thing, stopping is another, and Koji might well have gone a little overboard in this department. As if an Alcon six-pot front caliper wasn’t enough, he has teamed it up with a grippy one-off carbon brake disk. The suspension has been updated from the 1984 items, and the swingarm is yet another impressive Koji creation. For a neat touch, the chain passes through it and the pivot point on the frame is another billet piece Koji made.

Koji’s ride is one-of-a-kind, and has already caught a fair amount of attention at the few shows it’s attended. It appears to be a constant work in process, with Koji shyly admitting that it still has a few things to be sorted before he carefully takes it out on the road. We guess for some people perfection is a destination they can never quite reach.