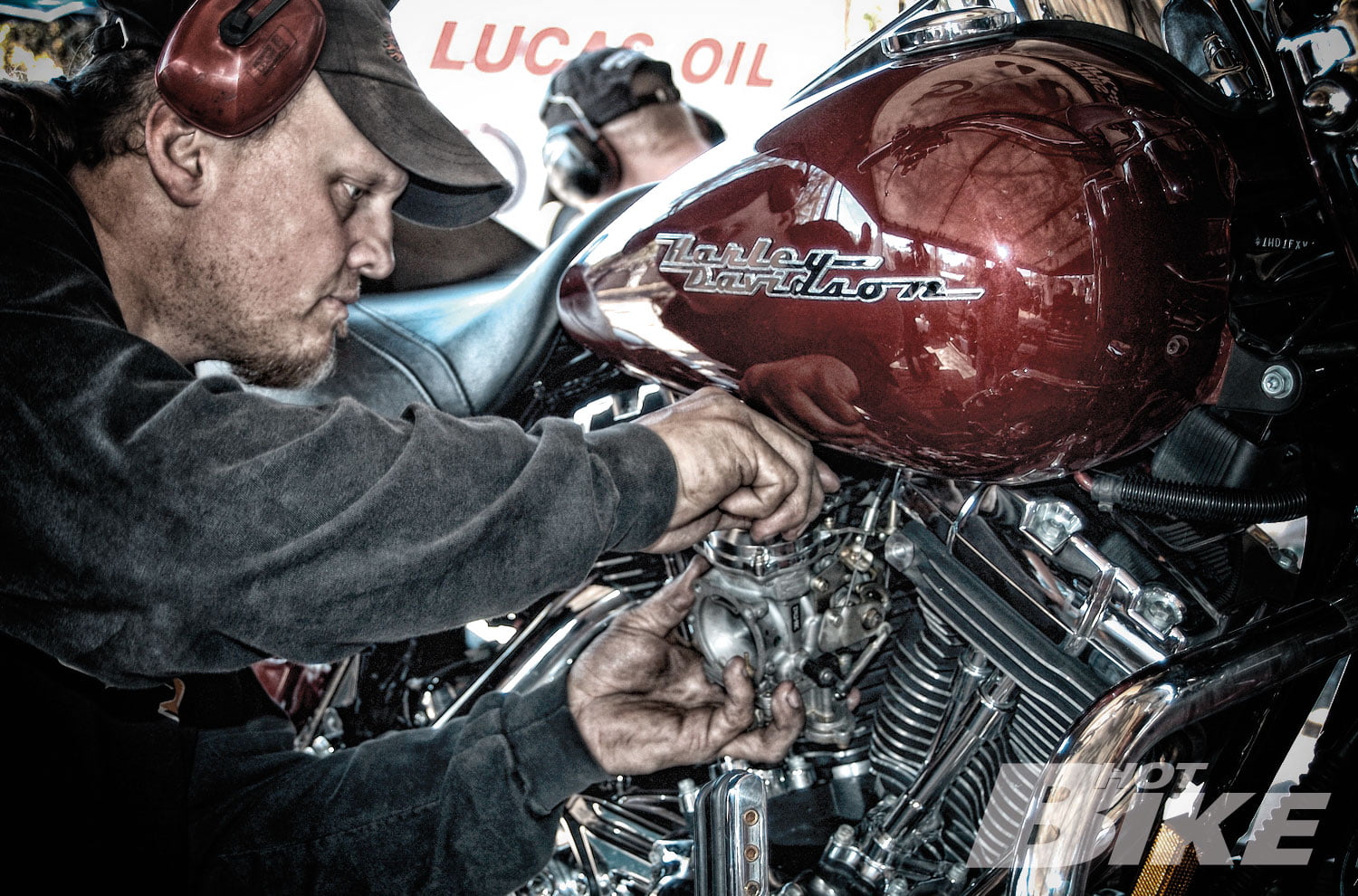 Have a carburetor on your bike? There’s nothing wrong with that. Carburetors have been an integral part of the internal combustion picture for a long time. In the last few years, though, those carbureted Harleys have been getting short shrift. All the emphasis has shifted to this or that EFI tuning module, to narrow- and wide-band sensors and re-programmed maps. Carburetors? They’re history.

“Hold on a minute,” say the guys at Speed’s Performance Plus. “Sure, we do lots of EFI tunes but there are still plenty of carbureted bikes out there, and with the right tuning a carbureted Harley can be a darn strong runner, too. Smooth and plenty crisp.” Amen to that. As a testament to that thinking we watched as the SPP guys set up one carbureted bike after another at this past Biketoberfest. More than a few of those happy riders brought their buddies back too. The difference between a properly set up carburetion system and one that’s been left stock is that noticeable.

What’s the trick? “No trick, really,” says SPP’s Jamie Hanson. “The first thing we’ll ask any rider of a carbureted bike is if there’s any spitting out of the air cleaner, and does he have to pull the choke out a little to make that bike run better? If either of those conditions occurs”, Jamie says, “it’s a safe bet the bike is running lean, and it might not be just the jetting. A close check of all the intake gaskets and seals, especially on bikes with some miles on them, can turn up some horrendous air leaks. That has to be fixed first to have any chance of jetting that carb correctly. Something else often overlooked, is the carb’s float-bowl venting. Quite often there just isn’t enough of it. The vacuum signal across the carburetor, which pulls fuel through the jets, can vary widely. The result is an air/fuel ratio that’s all over the place, lean one minute and rich the next. No jet change will correct that. Increasing the venting, a simple operation, evens out the fuel delivery with no up and down variations. This is especially critical with CV carbs,” Jamie says.

The next move with that standard CV fuel mixer is a Dynojet Thunderslide package. It comes with virtually everything needed to upgrade and recalibrate that carburetor. The kit includes a better, lightweight slide with a height-adjustable needle, a significantly better spring for the diaphragm and a completely new main-jet system with an assortment of replaceable jets. An OE carburetor set up with a Thunderslide and than dyno tuned is going to be as near perfect as that fuel mixer will get. That’s not the end of the carburetion options, though. Following that are the complete swaps, switching to a Mikuni or an S&S.;

“A big advantage with the Mikunis,” Jamie says, “is the ability to really fine-tune them. All the jets are offered in smaller increments and these carburetors, like that Thunderslide, also offer an adjustable needle with five clip settings. You can really dial these things in. Another plus is the Mikuni’s adjustable accelerator pump, but the biggest positive on the Mikuni ledger is its flat-slide design. Unlike the Harley CV, which has a slide and then a throttle butterfly behind it, the Mikuni’s flat-slide does away with the throttle butterfly. As soon as you twist the throttle you get instant response. There are plenty of sizes available, too, 42mm, 45mm and 48s, but bigger isn’t always better. As a rule of thumb the guys at Speeds will generally recommend that smallest Mikuni, the 42mm model, for bikes that are stock or just mildly modified. There’s plenty of top-end power but the bike is still crisp off idle with a strong mid-range. More displacement, of course, can take more carburetion, but not always.”

Will a Thunderslide Kit get that stock CV carburetor into Mikuni-response range? “Close,” says Jamie, “but you still have that issue of the slide with a butterfly behind it. There’s always going to be a little lag.”

Having said all of this, if the goal is all-out/top-end power there’s just one carburetor for that and it’s an S&S.; Probably the simplest carburetor in this mix, those S&S; carbs were designed for racing and at wide-open throttle they’ll out-perform any Mikuni or modified CV hands down. The one issue you might have with that S&S;, though, is the transition from intermediate running to running off the main jet. “That takes some careful tuning,” Jamie says, “but there’s a Thunderjet Kit available here giving the tuner an extra air bleed and jet to manipulate. It’s kind of like using the needle adjustment on a Mikuni or Thunderslide to ease the transition from intermediate to main.”

Like we said, carburetors have been a part of the motorcycle scene forever and there’s lots you can do to bring them to bring them into the 21st century. For more information on all of this talk with the Speed’s Performance Plus team yourself, and take a look at their web site.