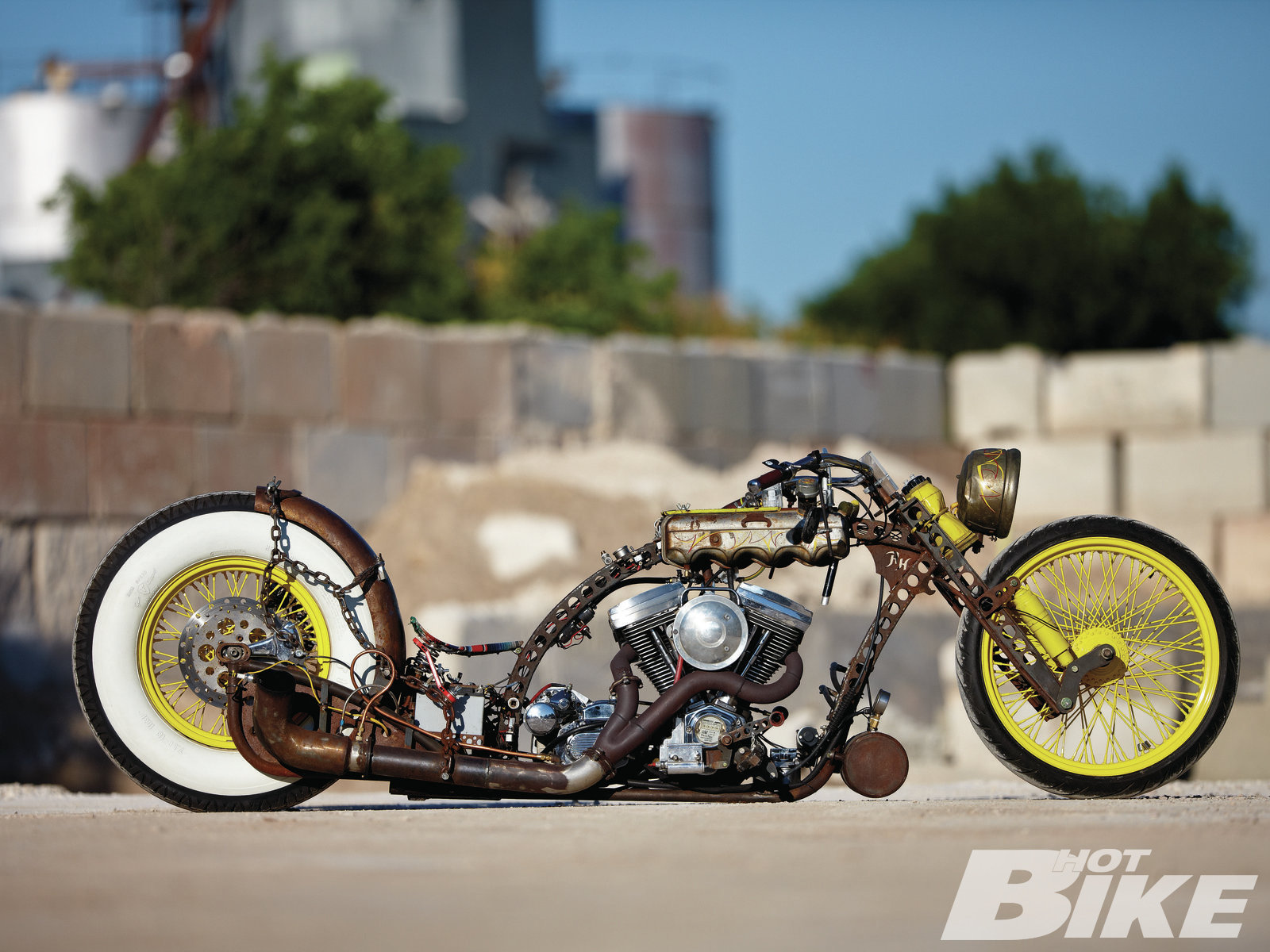 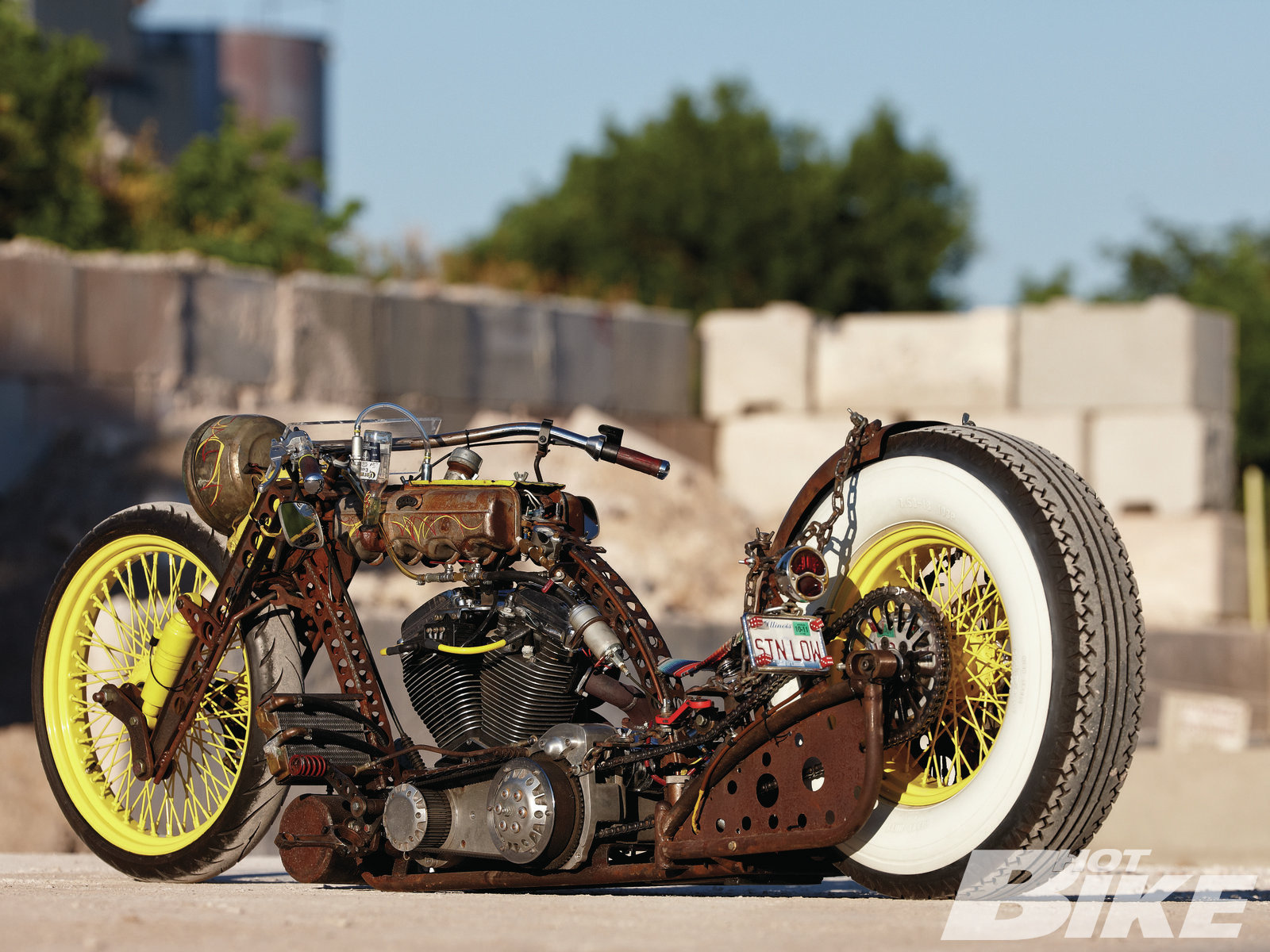 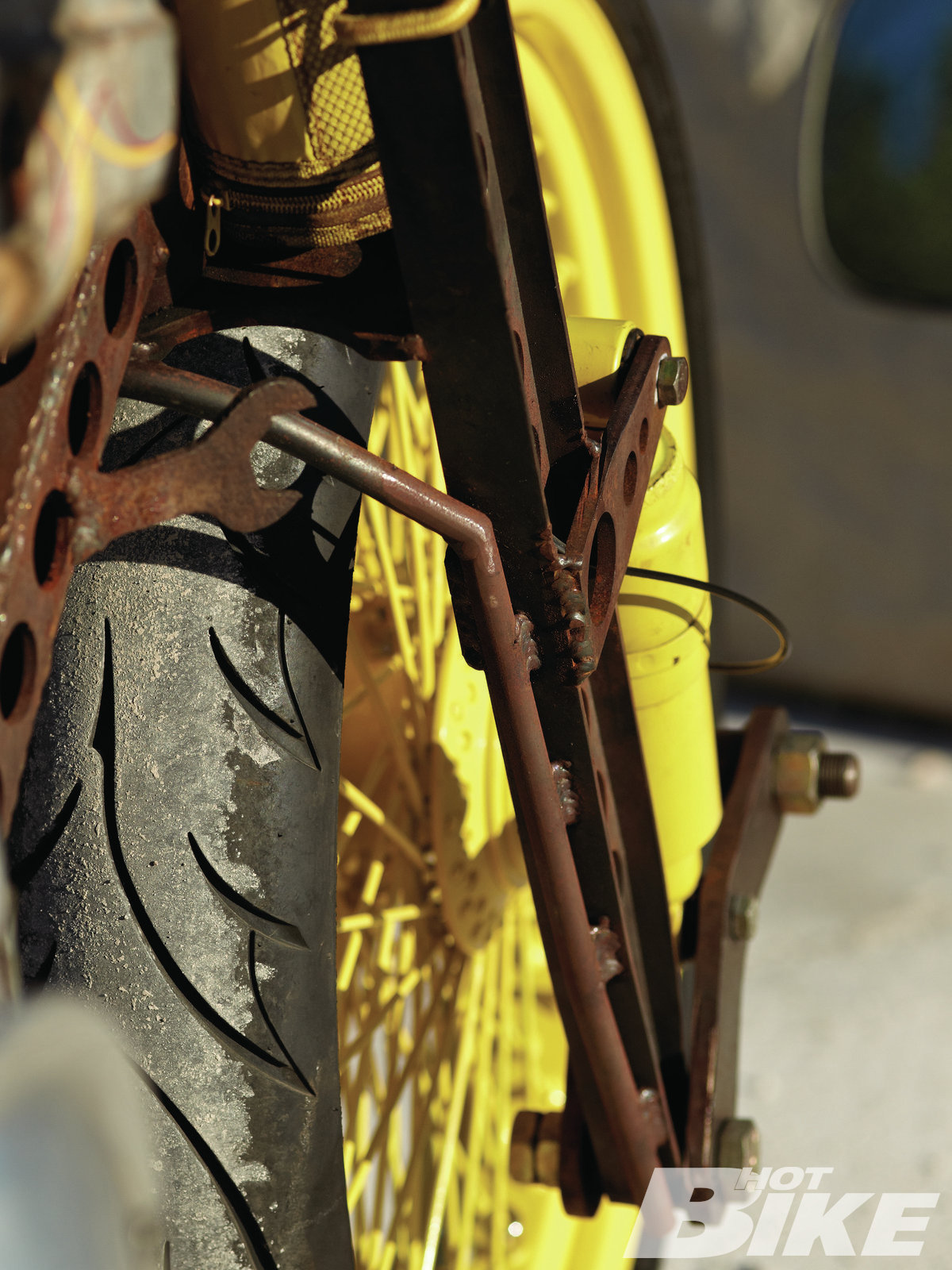 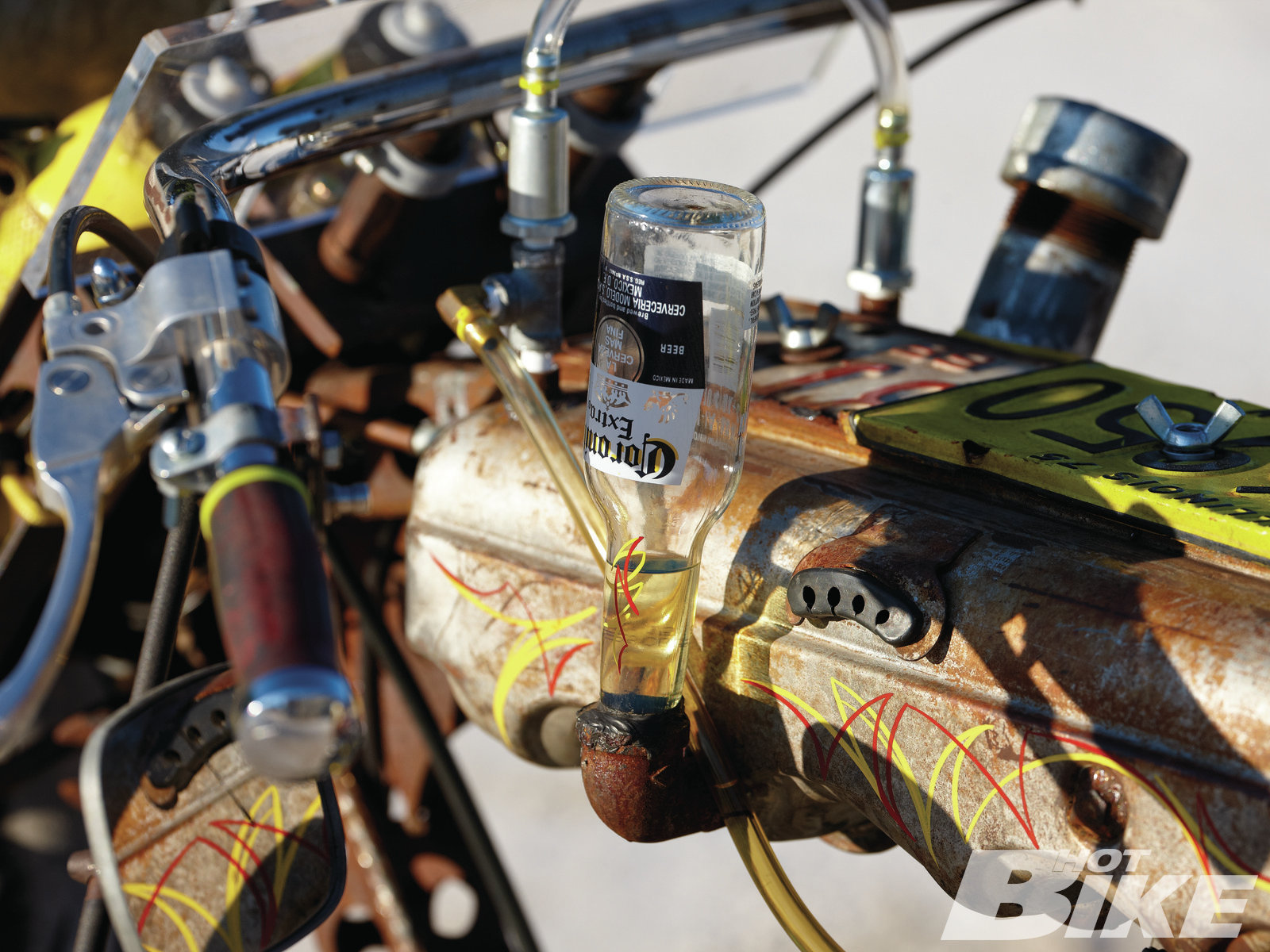 When the beer is empty the fun is done! 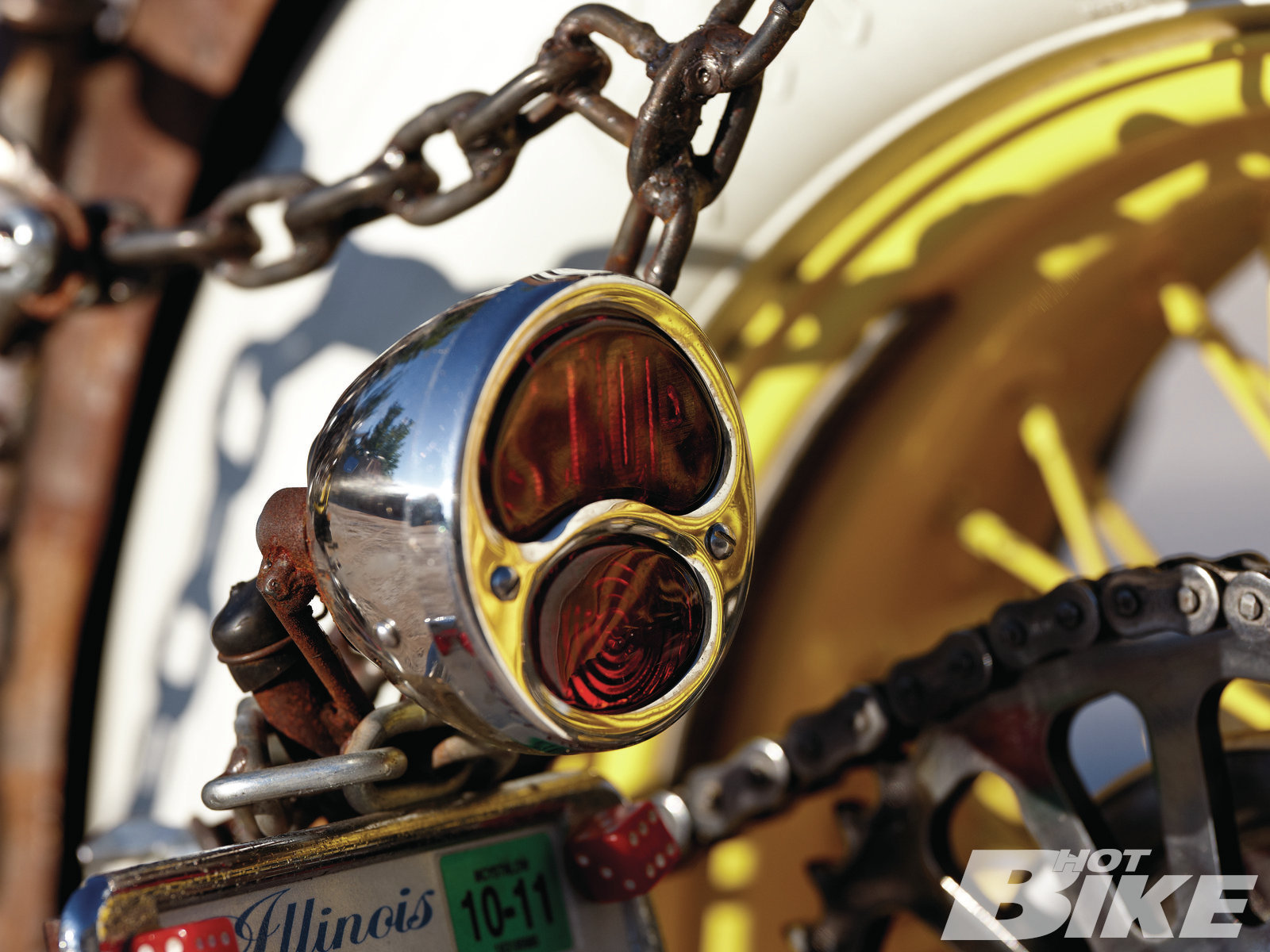 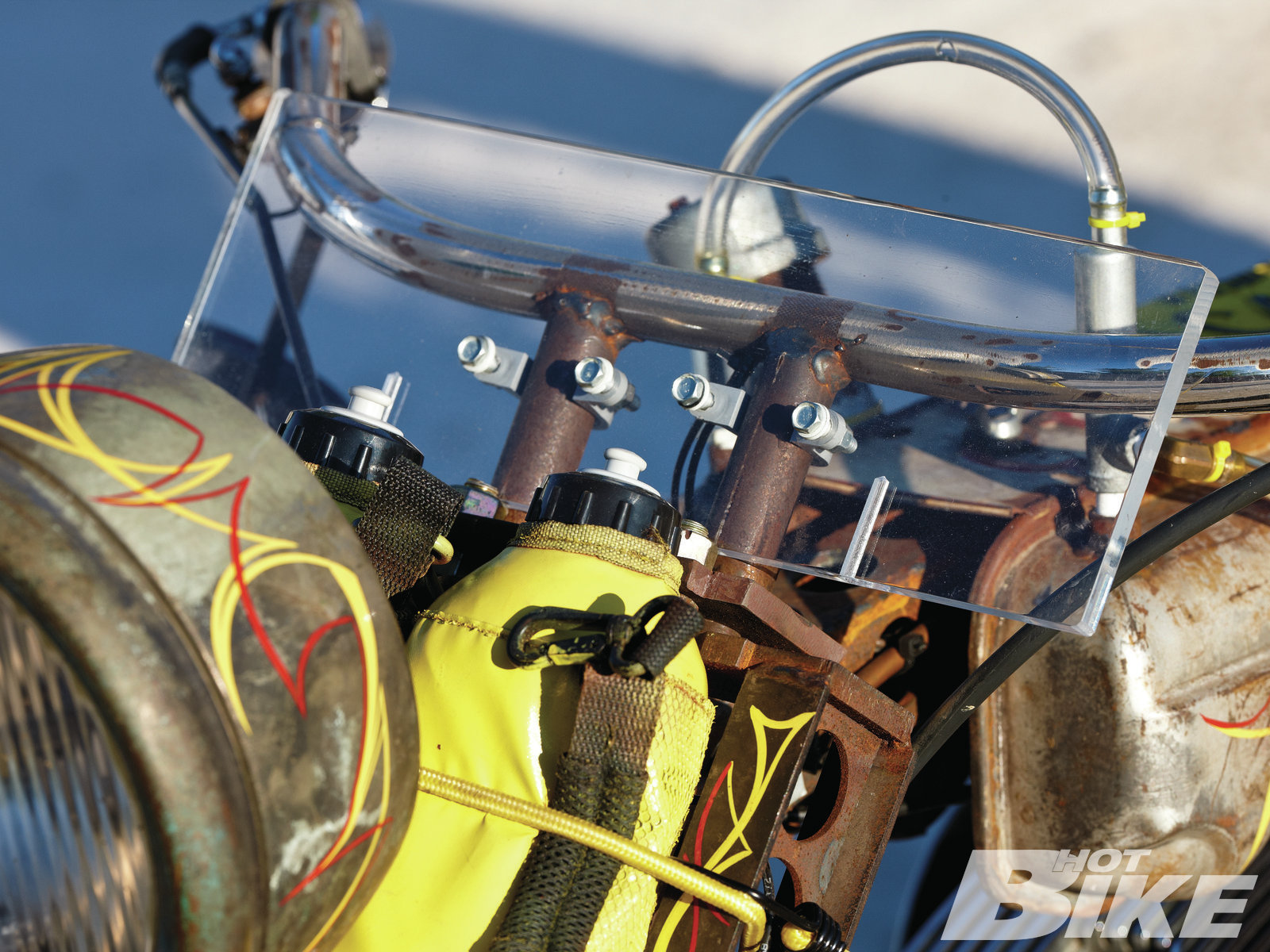 Not sure how much wind that “windshield” will block? 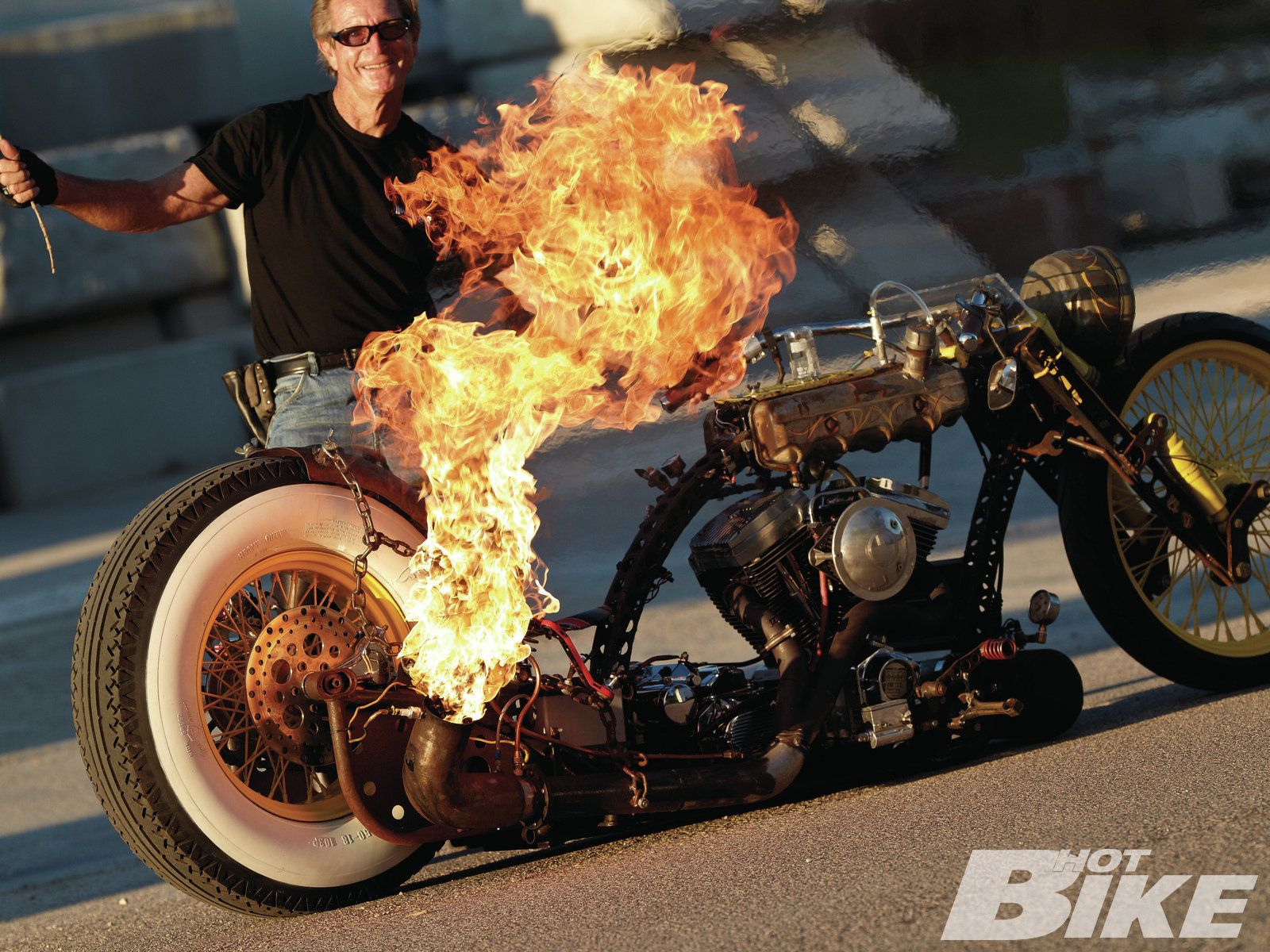 Soon to be burning a lot more than rubber! 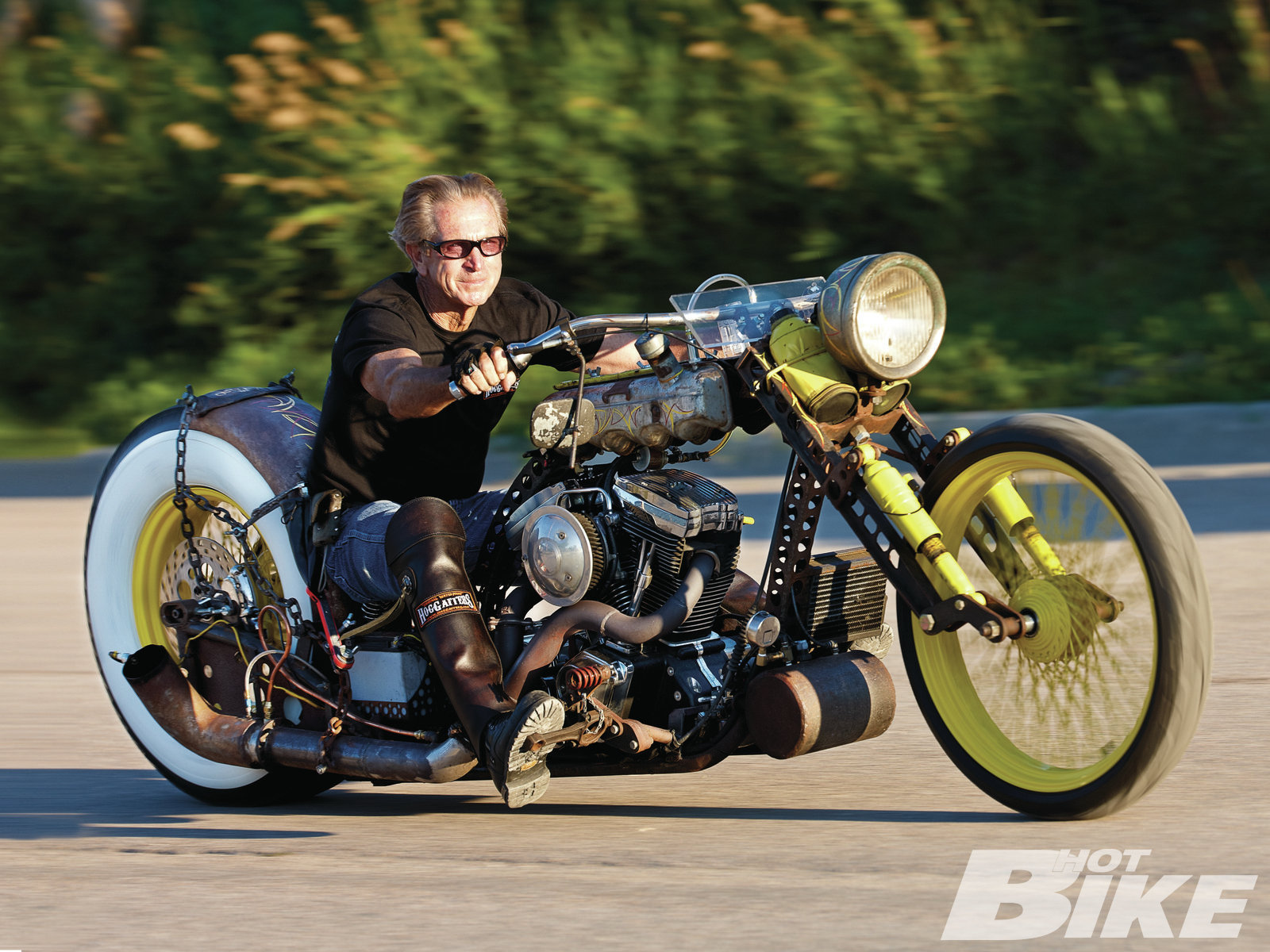 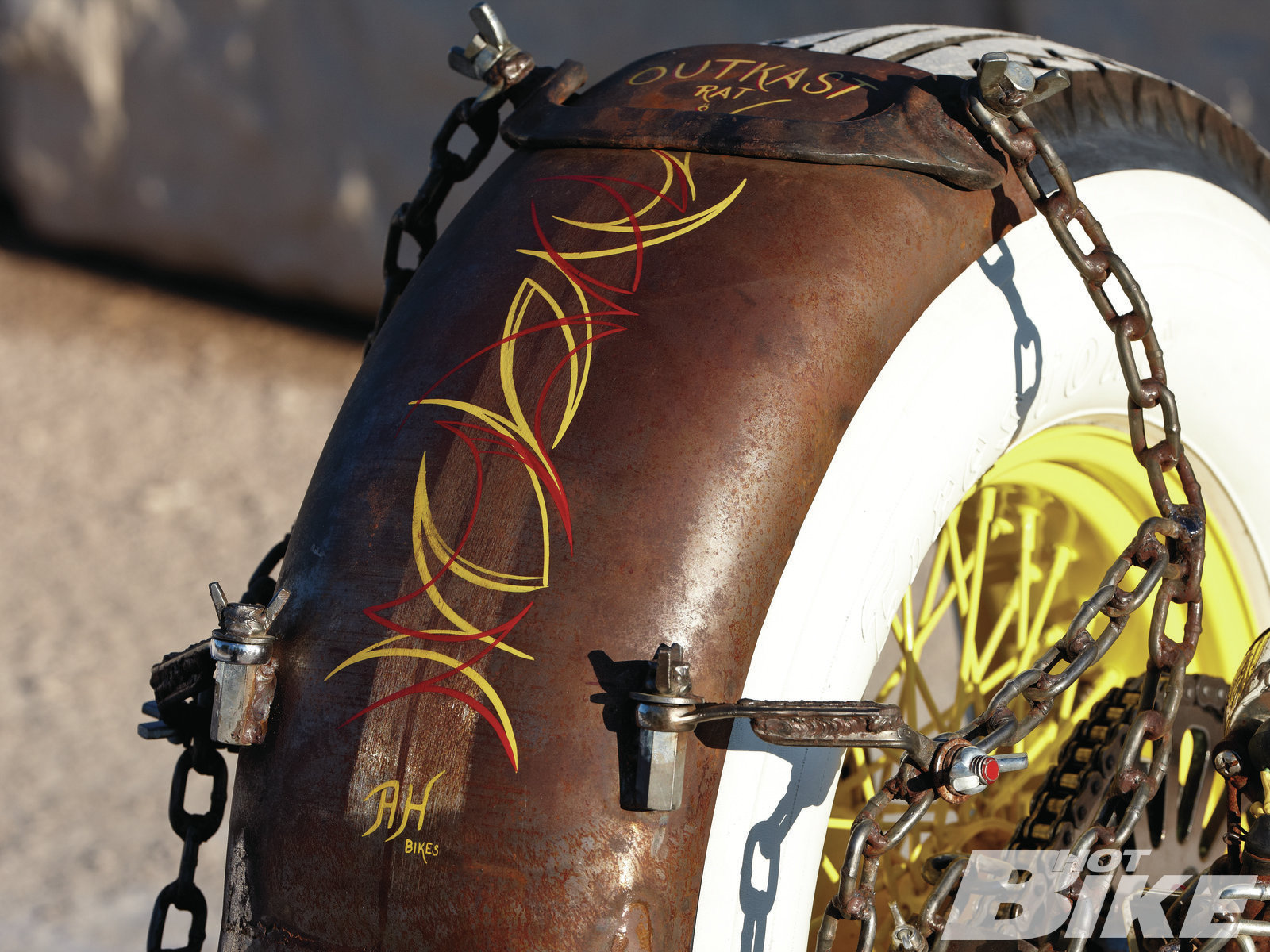 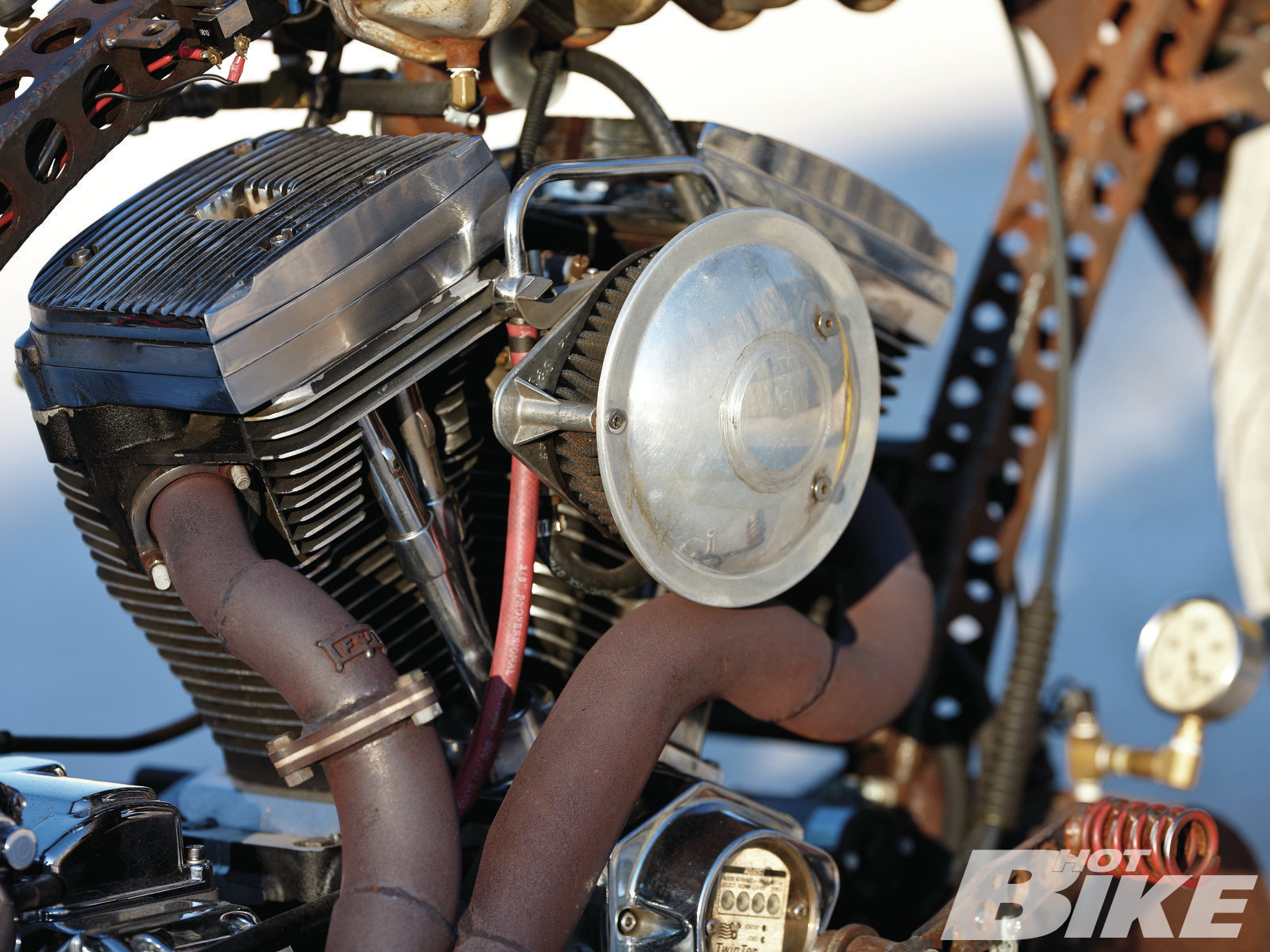 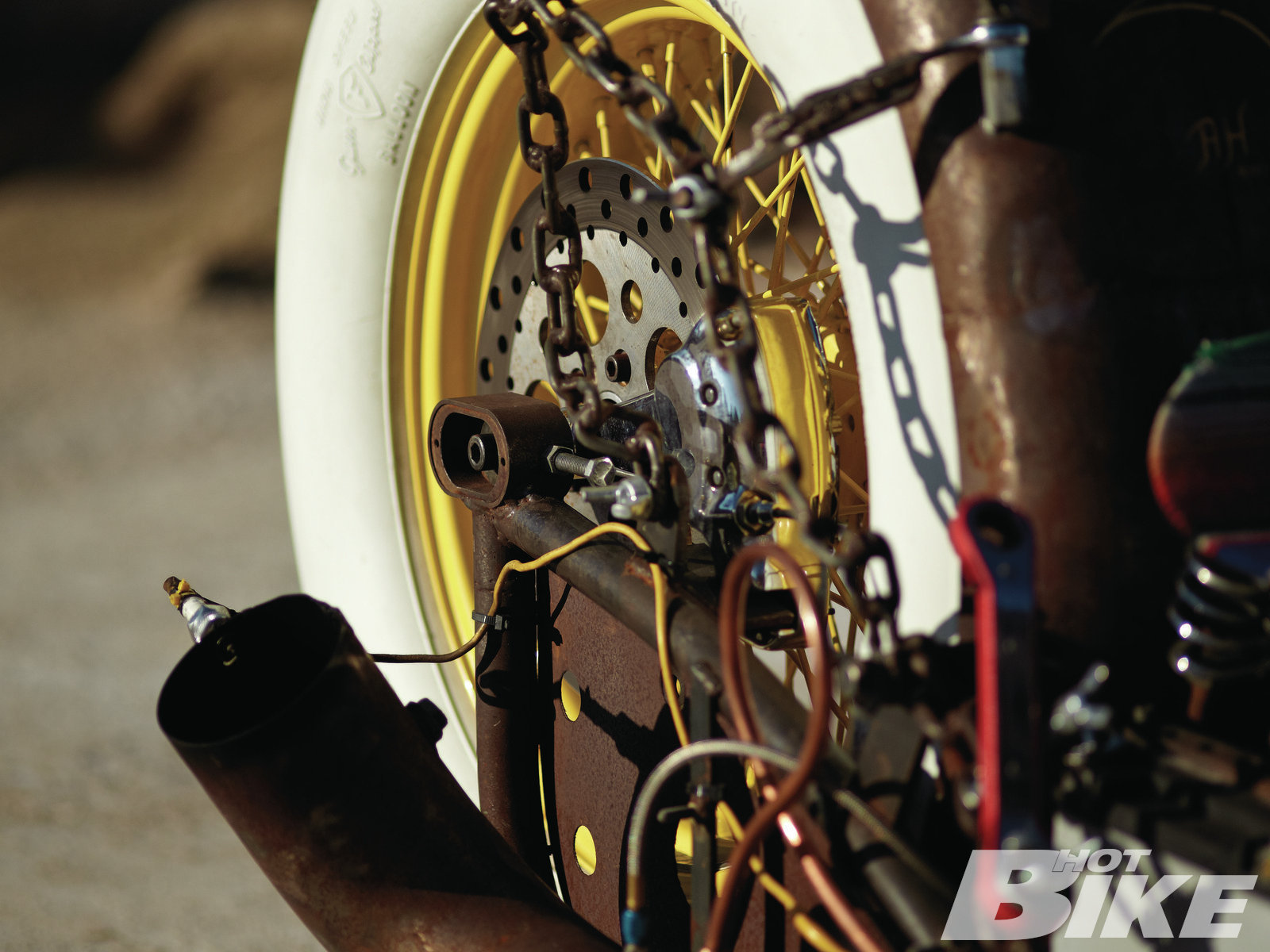 Bill York, of Vandalia, Illinois, could be called a Rat Bike aficionado. He’s amassed a vast number of ratted metric bikes, but one bike his collection lacked was an American V-twin. He had always been a fan of the brand (he bought a Fat Boy for his lady-friend a few years back), yet that sole American bike in his garage was the exact opposite of his others (and his lady-friend liked it the way it was). In his effort to complete his rat bike set, Bill went to his rat bike source, Todd Anglani of After Hours Bikes in Florida and created a joint venture to have an American V-twin rat bike built. Together, they worked out the details of what features he wanted this bike to have: tall tires, slammed to the pavement stance, patina as paint, and a hidden talent that would please a crowd.

Bikes such as the one Bill desired can’t be bought at any kind of Harley shop, therefore the frame had to be built from scratch. Wheels had to be acquired before they could make the frame, though, because there aren’t many stock frame jig reference points for a bike with a 23-inch front wheel and a framerail scraping ride-height. A call was made to Ride Wright wheels for a pair of 60-spokers, powdercoated yellow (by Fusion Powdercoat) that would create a contrast between the planned iron oxide covering of the rest of the bike. A big, 7-1/2-inch-wide whitewall Coker tire was fit to the 18-inch-tall rear wheel, and a sky-scraping 23-inch Cobra tire was slipped around the front. Essentially, the frame was built around the fit of the tires and the super-low seat that positioned the rider directly in front of the rear tire. From the motor and primary forward, the bike has typical lowered geometry with about 6 inches more in the backbone, but from that same point towards the rear, it is considerably longer than a stock bike. There’s no rear suspension beyond the sizeable sidewall of the vintage-style tire. The extra stretch in the rear allowed some space to stash the oil bag at the bottom of a stack, with the battery in the middle, and a sprung seat on the top. Driving the rear wheel required an oversized length chain; the slack is removed with a chain tensioner that forces the chain shape to follow the lines of the frame.

Just as one would guess on a bike like this, the frontend was a hand-built affair, too. Consisting of matching lightening holes in a leading-link fork configuration, the front suspension sports a pair of Gabriel Adjustable air-shocks (painted yellow for more contrast) that have enough travel to allow the bike to rest on the framerails when completely drained of air. Swap meet beach bar-style handlebars not only complement the look of the frame, but they also provide a bit of pullback and added reach that reduces the vast span from the seat to the hand controls. “Even when the shocks are full of air, it’s almost impossible to get over some speed bumps—gotta keep an eye out for ’em ahead of time,” Bill said.

With the Ultima motor and drivetrain as a few of the exceptions, most of the remaining parts, like the gas tank, oil-cooler, air-tank, and foot controls, were hand-fabricated. A pair of old Plymouth valve covers were formed into the right and left sides of the gas tank mounted on either side of the backbone. “See the upside-down Corona beer bottle on the left side of the tank? That’s a gas gauge JB welded in place with a pipe elbow,” Bill said. A junkyard heater core acts as a hard-mounted oil-cooler, and just below the cooler is a custom-made, cylindrical air-reservoir for the air-shocks. Chevy piston rods, welded to the frame, house levers tipped with valve springs that actuate the only brake (rear) and the transmission shifter. Red, ratcheting wrenches ride on both sides of the seat and lock into place when Bill attaches the seat pad for a passenger.

Remember that hidden talent discussed in the first paragraph? Well, the decision was made to incorporate a flame-thrower into the exhaust system. Not exactly an ordinary aspect of a show bike, but well worth the effort. “An in-line fuel pump was built from the gas tank, and it was attached to a nitrous sprayer nozzle, then a spark plug was welded to the tip with the flames shooting out of the end of the exhuast…this thing will shoot huge jets of flame 30-feet into the air,” Bill said (note to reader: do not piss this guy off in traffic—if he gets on your left side, you’re toast). If Bill had this bike at a show, it wouldn’t be hard to imagine it would draw a crowd after blasting a shot or two of flame into the air! And, he never has to worry about torching any meticulously applied paint. HB