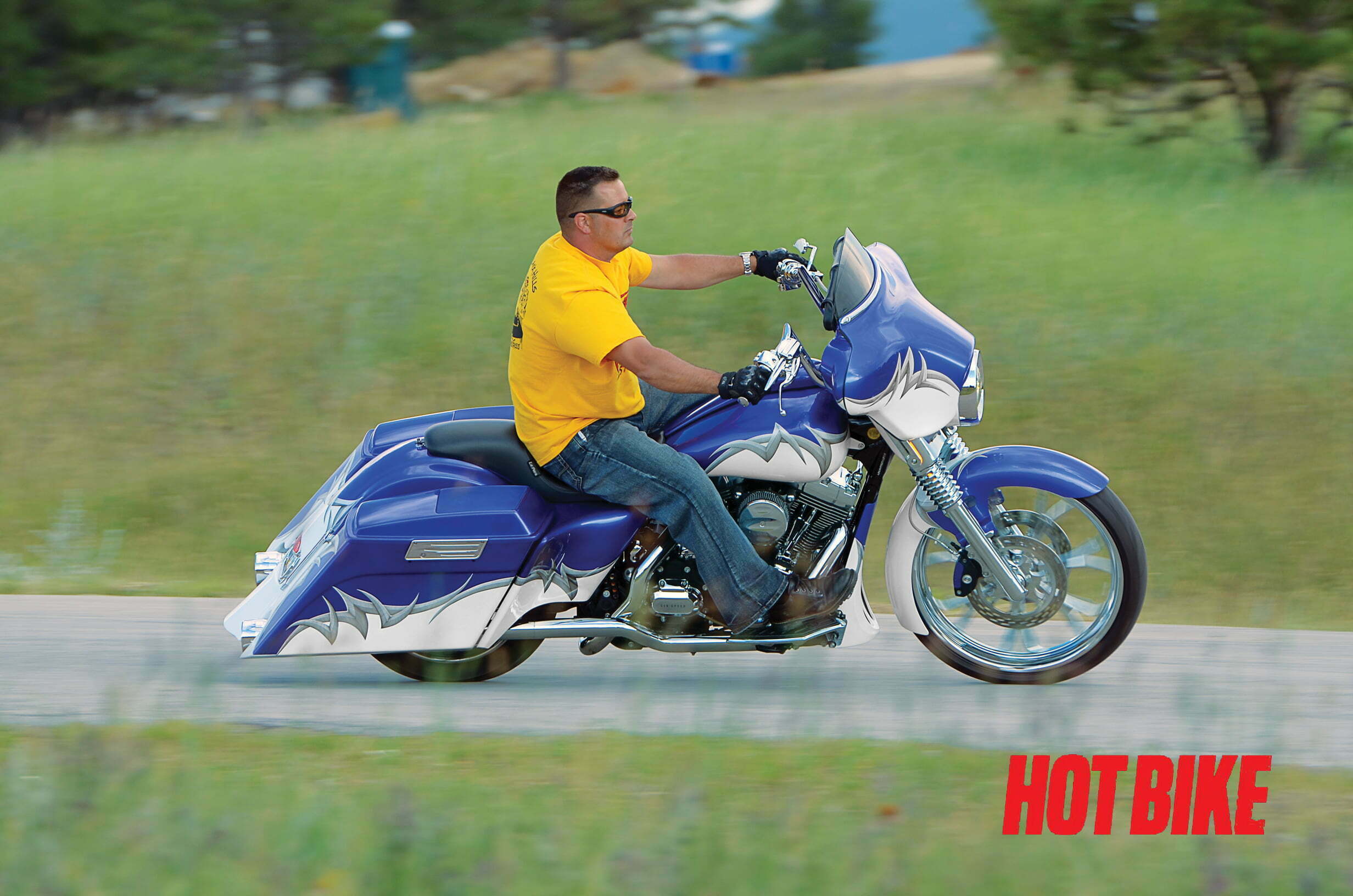 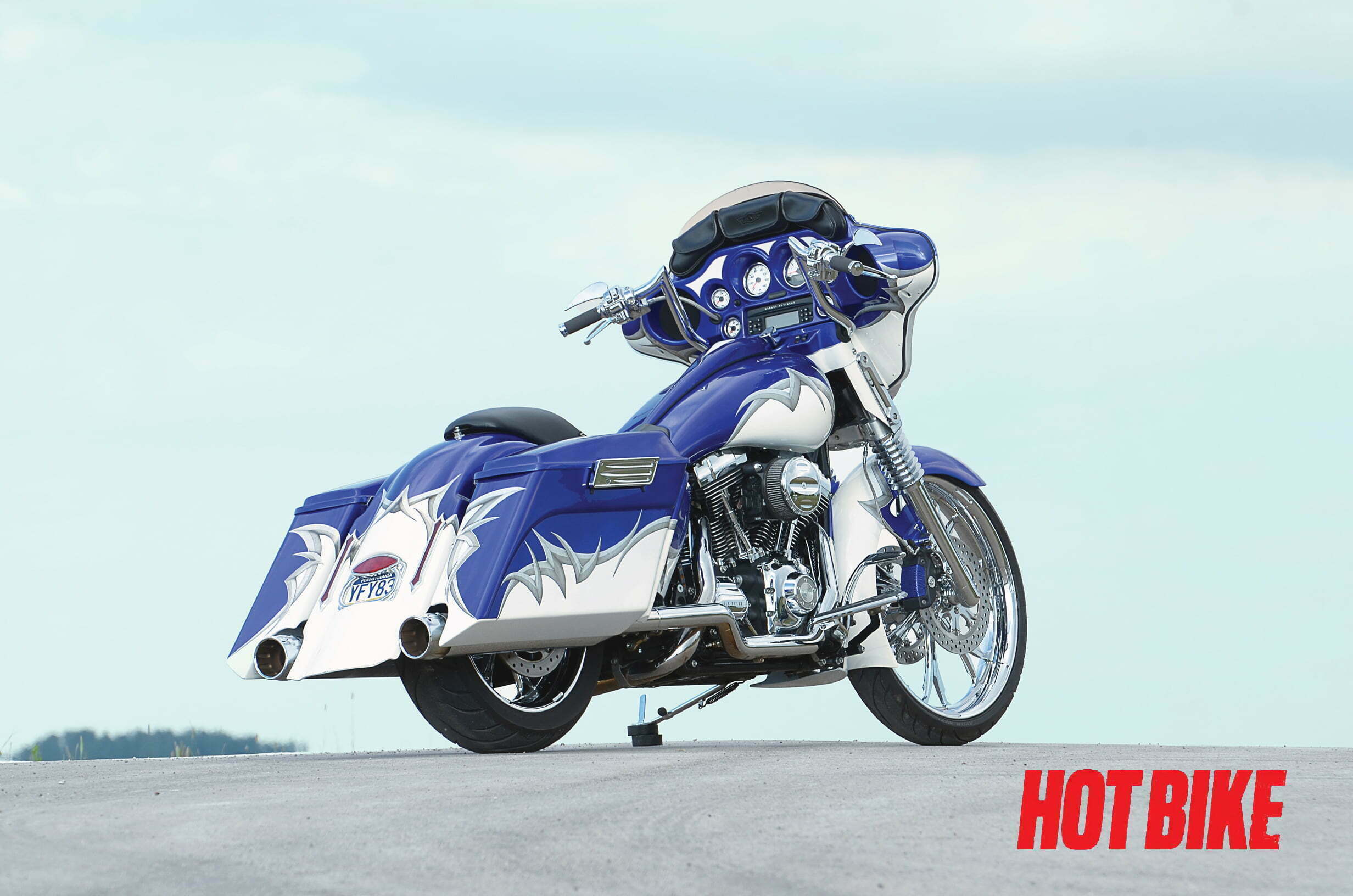 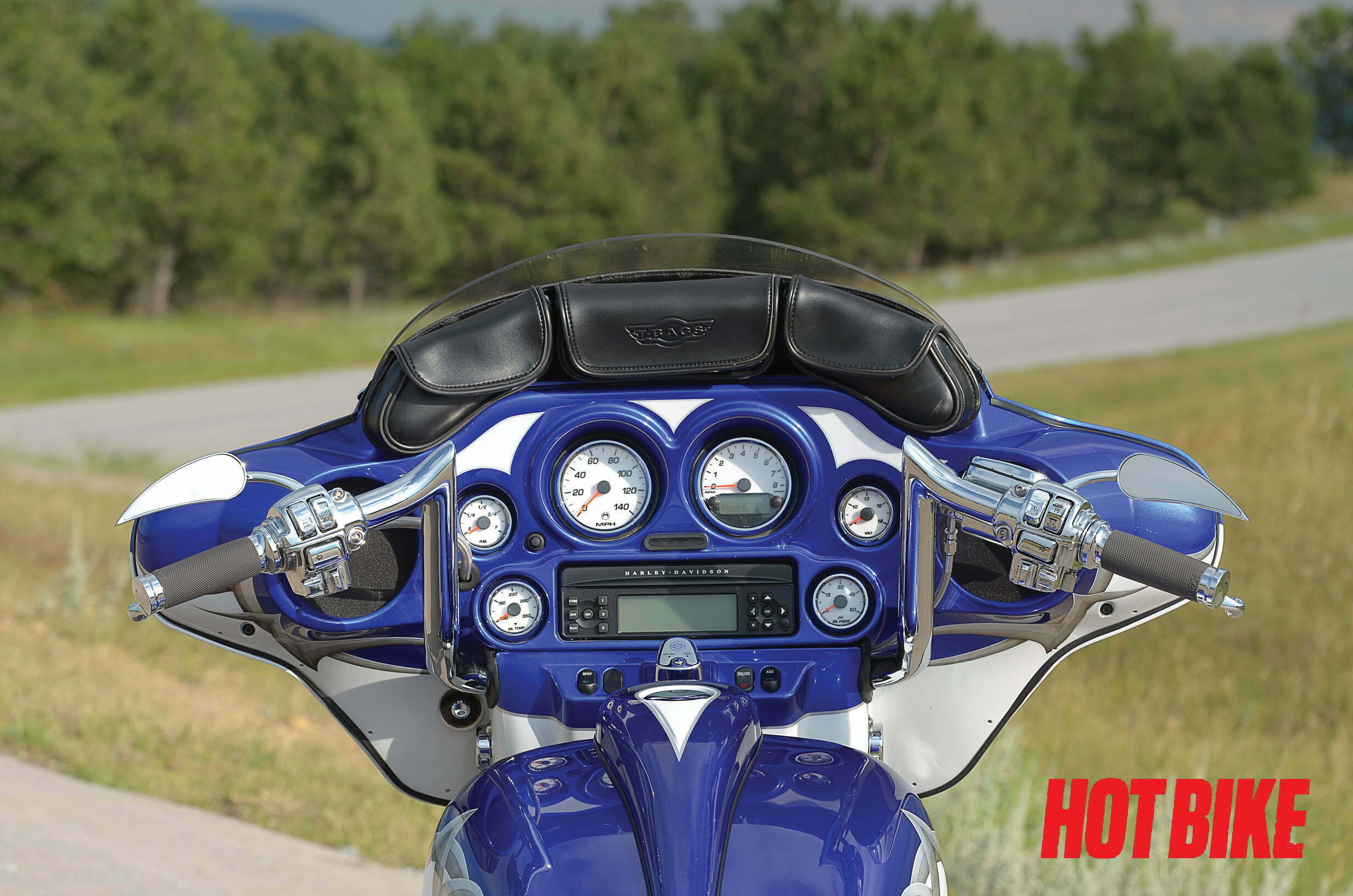 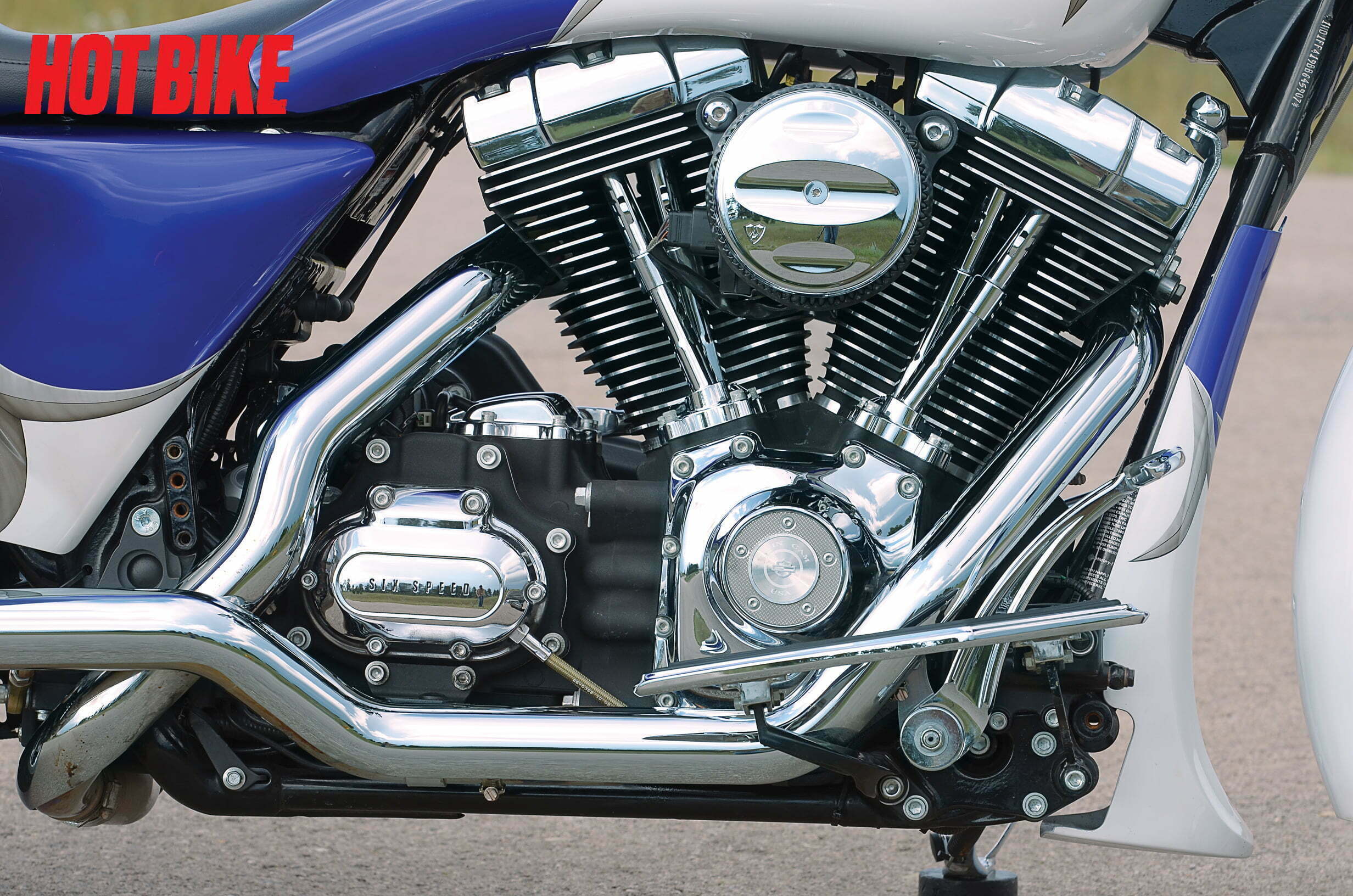 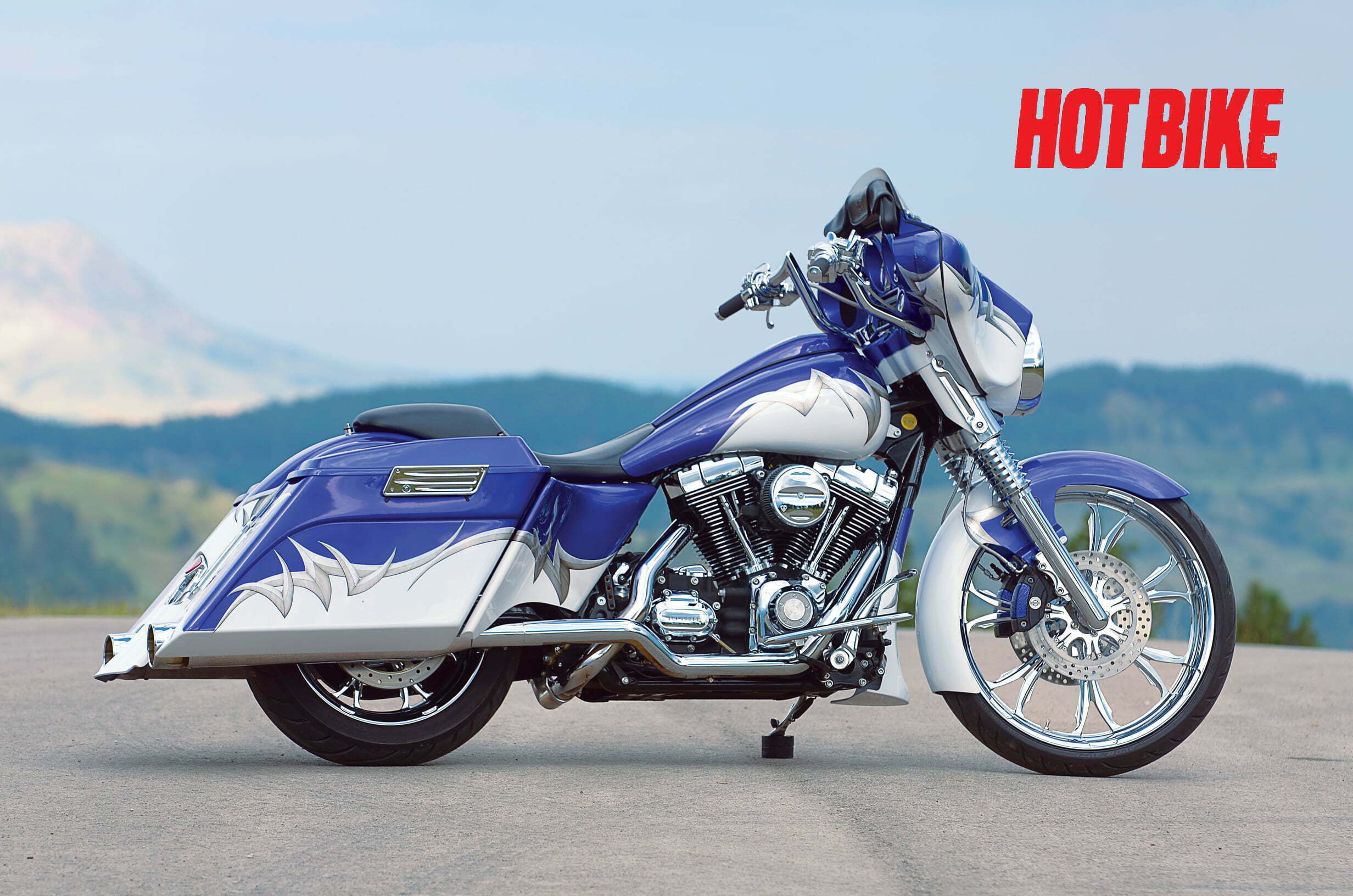 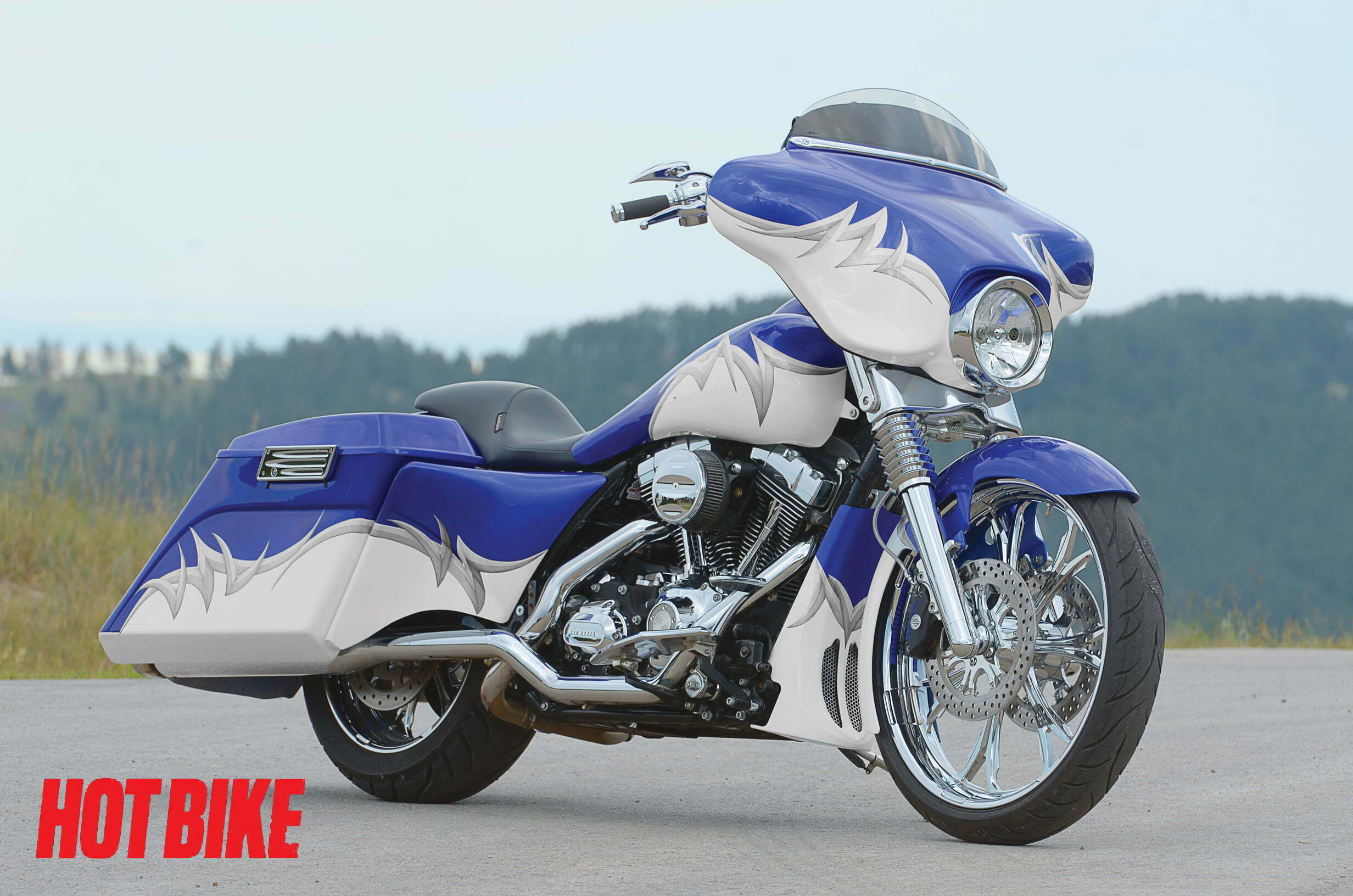 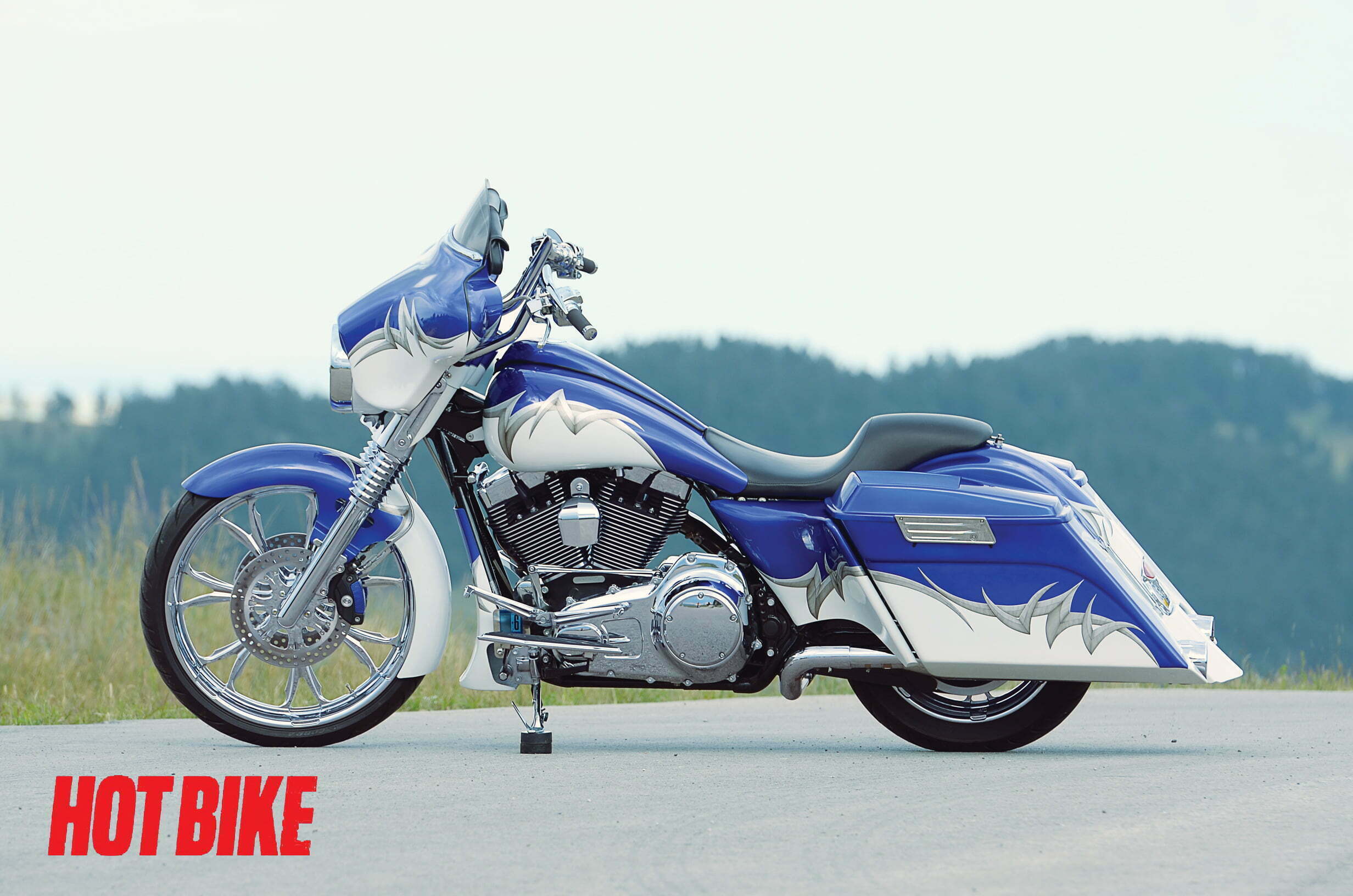 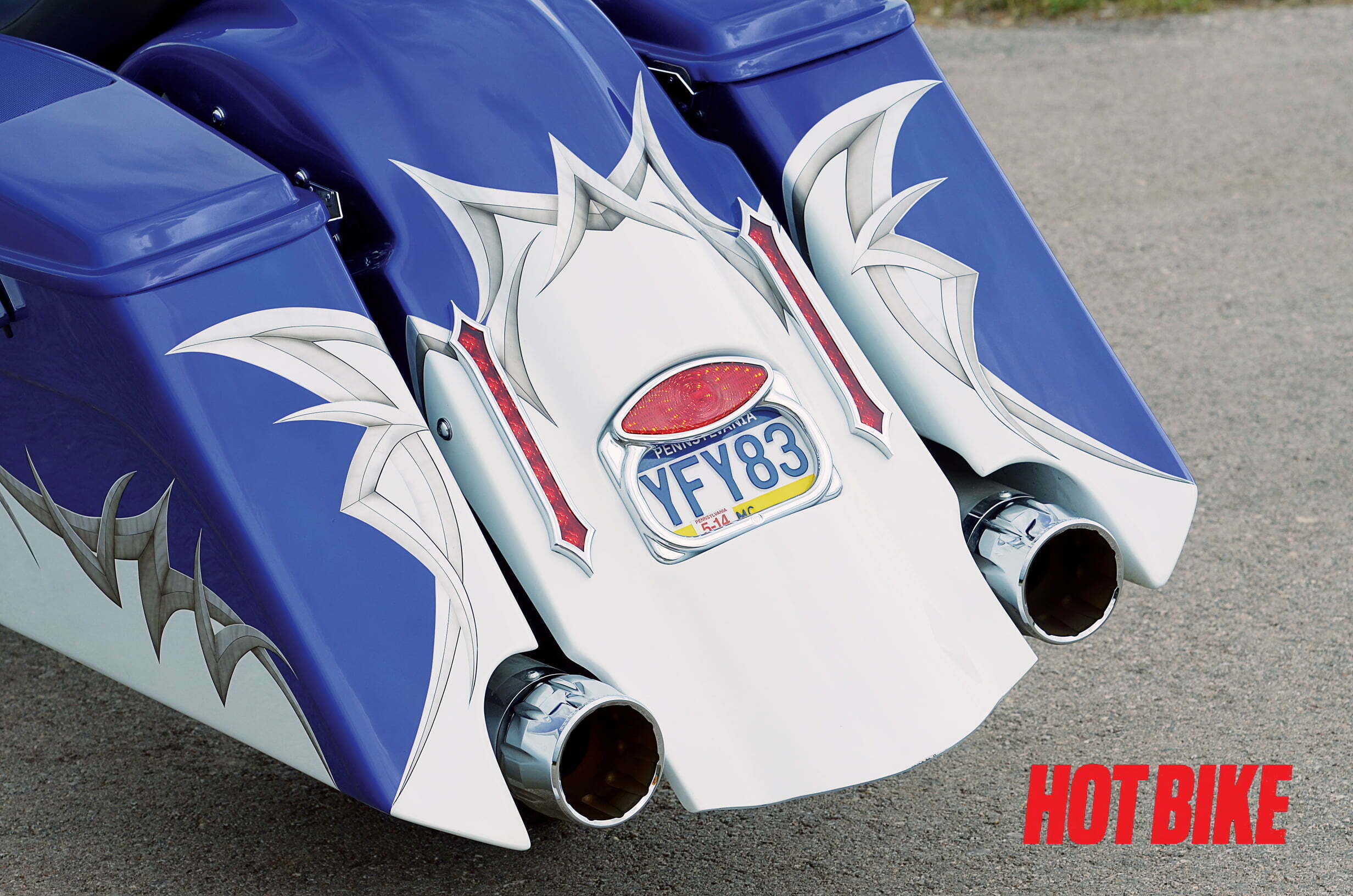 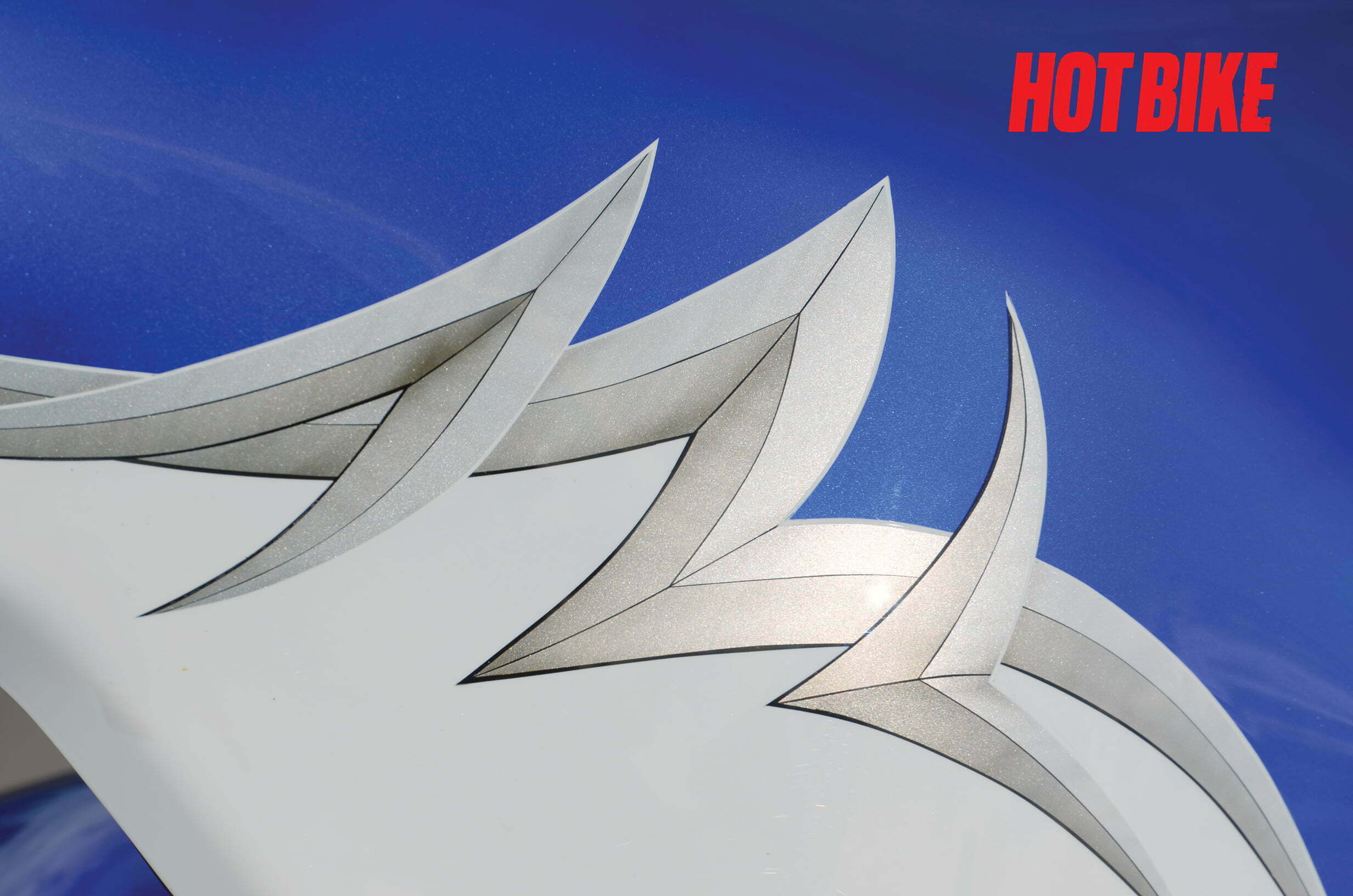 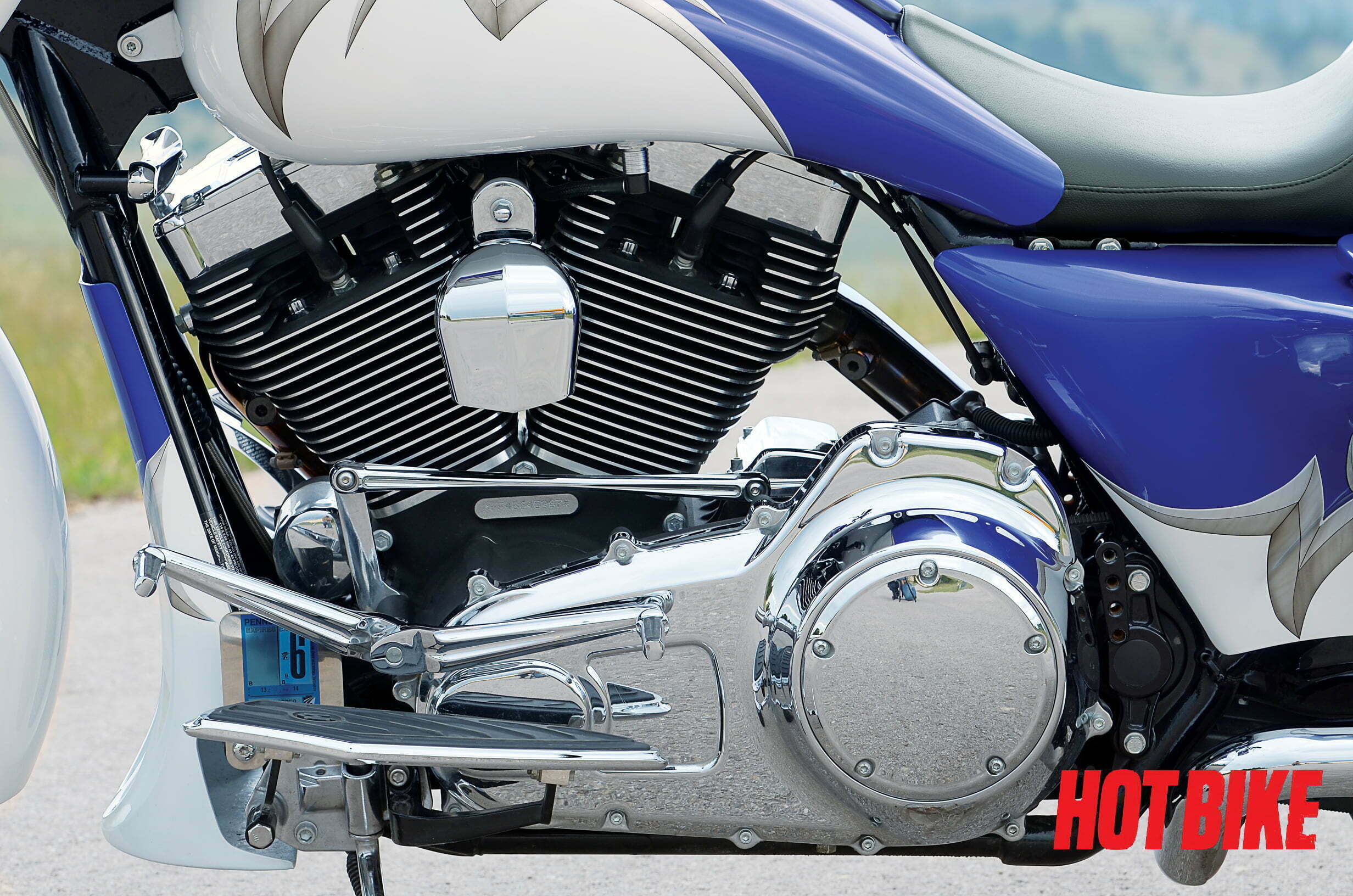 Calling this 2011 Electra Glide a shop bike is like saying Genghis Khan had anger issues. Technically, you’d be right but understating the obvious. Tom Keefer’s Franklin Church Choppers is a small shop in South Central Pennsylvania. It has been in business for 12 years now and specializes in service, repair, and customization. It’s a modest operation with a personal touch that creates five custom bikes a year or so. The place might be relatively young by business standards, but Tom’s no stranger to the bike builder rodeo. “I grew up around motorcycles,” he said. “My dad was a die-hard Harley rider. There was always a motorcycle apart in our living room. In summers we were always messing with his older bikes. When I grew up, I was a car mechanic at first who switched over to all bikes.” This baby his idea of a “shop bike.”

This Glide was found on Salvage Direct. It was totaled, with only 1,200 miles on it. Every painted surface bore horrible road rash. Mechanically, though, it was perfectly fine. It just needed some surgery so it wouldn’t look like the bagger equivalent of The Joker. When he got it home to the shop, Tom spent about a half hour stripping off ancillary parts, installing a new left turn signal and brake light lens, and it was ready to ride. Butt-ugly at the time but roadworthy.

That changed 500 miles later. “I needed a shop bagger to show what we could do with a stock bike and to try and grab some of the local bagger business,” Tom said. Stock and ugly isn’t any way to do that unless your shop’s name is “Stock and Ugly Cycles.”* It was time to bring beauty to the beast.

Tom Keefer used off-the-shelf parts without cutting into the frame to do just that. His target audience was your average rider looking to upgrade on a decent budget. All of the parts seen here were bolted on with minimal fab work. It was made to look like a million bucks—not cost it.

Seeing as how this was all about beautification, metal swapping was vital. Keefer tossed out the scarred fenders in favor of a Ness Wrapper fender that shadows the new Performance Machine Paramount front wheel. It’s partnered with a Ness Down and Out at the rear with matching hard bags while Nasi side covers dress up the center. Up top, Tom switched over to a Yaffe gas tank and dash to streamline the profile.

This revamped Electra Glide was supposed to grab eyes. Subtlety wasn’t on the menu. That’s probably why Tom had Jon Waggoner at Big Toe Paint Works dress the dresser in bright two-tone pigment instead of the evil-yet-stealth that is monochrome black. Split into cobalt blue up top and white below, the paint scheme has a silver and gray tribal border throughout the sheet metal. Saying it looks a tad better than the road-scarred stocker it once was would be a masterstroke of understatement.

Even though Tom’s main focus was aesthetic (new bodywork, custom wheels and controls), he knows there’s a lot more to a great custom bagger than its looks. Modern tech gives touring riders more options than ever before. If you want to impress them, you’ve got to come correct. He may not have thrown a DVD player into one of the bags, but you can bet your ass he didn’t leave the stereo stock. Keefer kept the stock head unit but swapped over to Rockford Fosgate 6×9-inch speakers and matching amp. It’s definitely and upgrade bagger faithful can appreciate even though it’s not a bank-breaker with all of the audio bells and whistles. This was about optimization, not overkill.

The same held true for the motor. Or when I asked Tom about upgrading versus going big: “Yeah, that’s pretty accurate. I always try to make it something that didn’t cost so much money that the average person couldn’t achieve without bolt-ons. I wanted the best of both worlds with good looks and a better-running motor.” Andrews 54 cams, Screamin’ Eagle pushrods, and a Vance & Hines Fuel Pak went into and onto the powerplant to make better use of its new Rinehart pipes and Ness air cleaner.

All of which would prove themselves on the trip to Sturgis. It took Tom two and a half days to make the East Coast run to South Dakota for the mother rally. He pushed the first two days (738 miles the first; 660 miles the second) to hit Klock Werks pre-Sturgis party. That third day was a leisurely 350 or so miles: “I got a bunch of pictures at landmarks along the way. That was my fifth straight year, and I needed to ride. I’ll be doing the East Coast ride in every year I can now.” That ain’t too shabby for a shop bike.

*If it is, set down this magazine and fire your marketing person right away. We’ll wait.