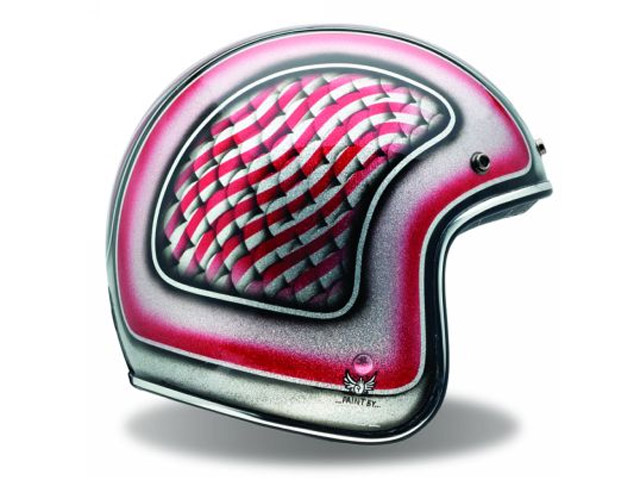 Popularized in the ’50’s and ’60s hot rod scene, and later on by custom motorcycle builders, pin striping is a form of custom painting that takes a steady hand, perfect technique and an eye for detail. With his own style that combines pin striping and airbrushed “fish scales,” Skratch has built a following of custom car and bike show aficionados. Doing a graphic for the Custom 500 is a first for him, but not his first experience with Bell.

“I guess you could say I grew up with Bell,” he recalled. “When I was a kid, my uncles had mini bikes and go-carts and they all had Bell helmets. When I got older and got my own dirt bike, I got another Bell helmet from my grandparents-a blue metal flake one. So we’ve got some history together.”

The Custom 500 paint scheme Skratch has done for Bell is called “Skratch Deluxe” and harkens back to those early days.

“He started with a silver metal flake base,” explained Bell Creative Director Casey Potter. “He laid out some side panels and filled them with fish scales, then finished it off with some crazy red candy and pin striping. It turned out gorgeous-the colors are really rich and the paint has a deep texture to it.”

Potter went on to explain that he approached Skratch because he felt the Bell brand-and the Custom 500 in particular-were complimentary to his style…a sentiment the artist echoed.

“In my early 20’s I started striping and painting the Bell 3/4 helmets-the mediums were small and tight, and had great form,” he said. “You could always lay out some killer lines on the spine of the helmet, or panels on the sides. I liked to letter the top-‘Tim Barns – driver’-you know the style.”

He then went on to describe a driving adventure of his own that involved a Bell.

“When I was younger, I’d wear a Bell open-face for street racing. It came in handy the one time I made a ramp and jumped a ’78 Monte Carlo,” he explained with a laugh. “I stuffed the car, broke my nose, sprained both hands, wrapped the steering wheel around the column and pushed the front clip into the doors. I also broke the windshield with my head…which-other than my nose-was fine since I had that Bell on.”

The Bell Skratch Deluxe is a limited-edition helmet which hits the stores in February and has an MSRP of $139.99.

Throwbacks and retro lids are nice, but nothing beats an original. Back in 1954 Bell founder Roy Richter formed his first helmet out of fiberglass and named it the “500.” That moment was ground zero for the modern motorsport helmet and it gave rise to an entire industry. Bell’s new Custom 500 pays homage to Richter’s original design and adds modern protective technology to bring the design up-to-date while still keeping the original’s aesthetic. By combining a custom fiberglass layup with a specially designed EPS foam layer, Bell engineers were able to craft a helmet that is at once light-weight, narrow in profile, and DOT-compliant. Adding custom paint-inspired graphics, chrome trim work (on some graphics) and a quilted liner, the new Custom 500 custom looks as good as it performs.