Judging by the photos, I’d say Indian Motorcycle’s Scout series looks pretty good butt nekkid. Not in the “quality-time-with-a-hanky” sense; its design lends itself quite well to being turned into an aggressive, minimalist little hot rod of a scoot. “Road Runner,” the aggressive, stripped-down Scout Sixty you’re peeping now, is the first custom Indian motorcycle from UK bike builder MotoShed, and possibly the first Indian Scout with underseat exhausts.

MotoShed’s Road Runner project came to life after a couple of the group’s members rode a standard Indian Scout Sixty shortly after its launch in 2016. They were so impressed with the ride that they soon starting talking about how they’d like to modify one. “We were blown away by how well the Scout performed but knew we could take it further as well as produce a beautifully finished and unique bike,” MotoShed says. “It was crying out for it, and after just a few hours of sharing ideas, the key underseat exhaust idea was born, then we knew we had to do it. We ordered the Scout the next day.” 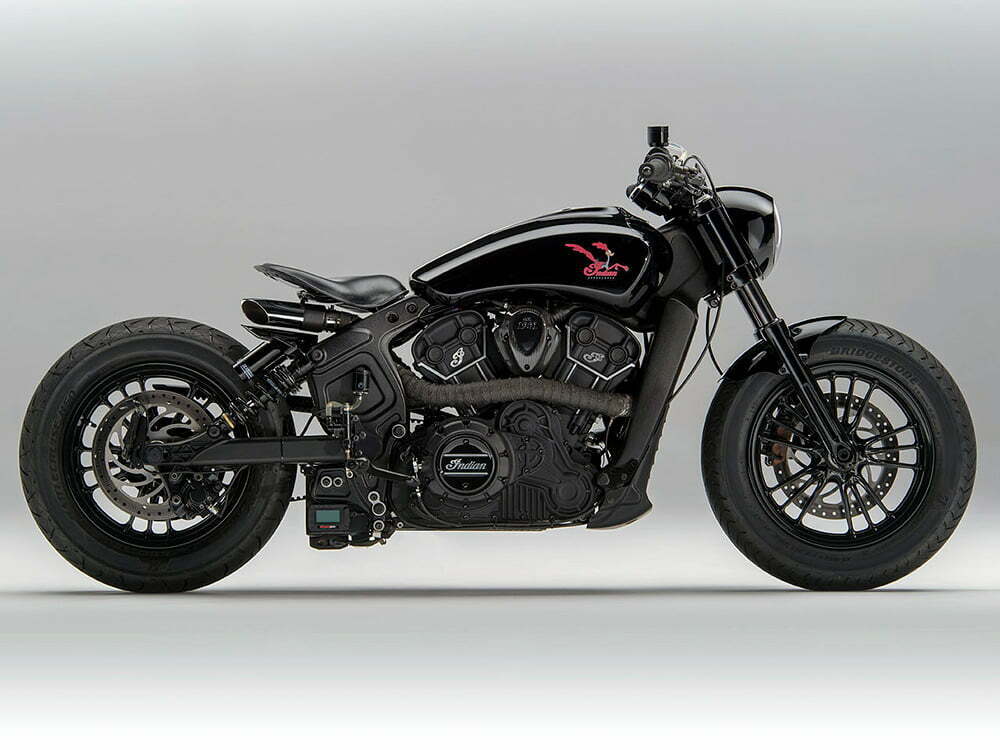 The team also removed the standard fork, had them black nitride coated, giving them a superbike aesthetic and adding to the stealth look, while a complete black titanium bolt kit was applied to the engine and chassis.

Once the bike had been stripped of all the parts that MotoShed wanted to replace, modify, or just eliminate outright, the complexity of the underseat exhaust plan became clearer. “It really was the most complicated part of the build,” MotoShed admits. “On the standard bike, there are a lot of important components hidden away under the seat such as the battery, ECU, and a lot of wiring. It’s an impressive packaging job by Indian Motorcycle.”

Removing the ABS pump from beneath gave MotoShed the space to build a custom battery box in its place. Relocated to the new enclosure were a smaller race-style battery, regulator/rectifier, and ECU, all of which required a lot of painstaking detail work to reroute and extend the wiring loom. 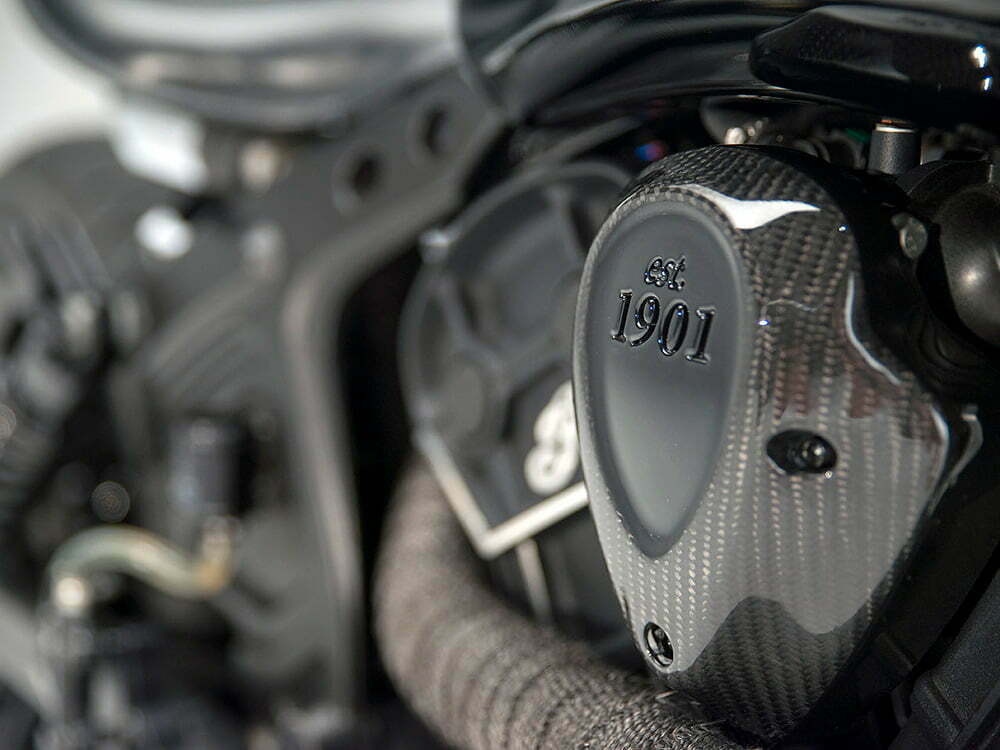 Continuing the attention to detail and to enhance the lightweight, stealth appearance, many covers and panels have been dipped with a carbon-fiber look.

With the underseat space clear, the group could then begin routing the pipes round the engine and through the gap. Managing heat was a big concern, so the pipes were wrapped to get more of the heat to the end of the tube, away from the rider’s legs—with the added bonus of looking great. Additional heat management required the fabrication of a rear hugger/heat shield which also shields the exhaust from road debris. 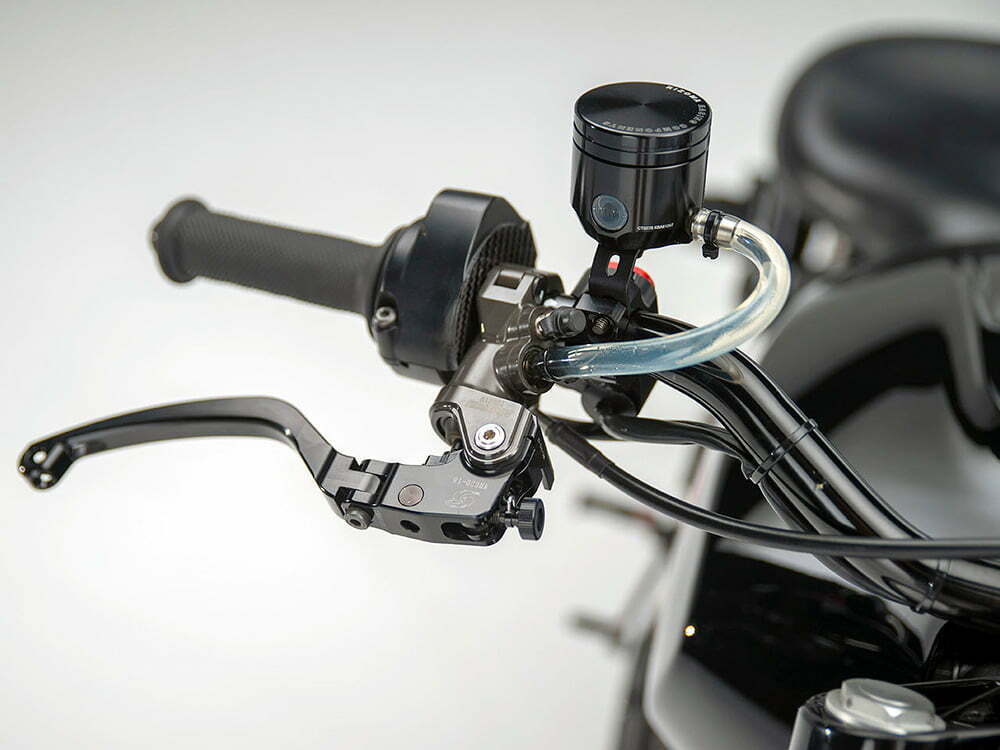 For the hand controls, minimalist switch gear was chosen, and with the Galfer clutch lever, brake lever, and master cylinder, the blacked-out theme evolved. Fully adjustable rear suspension from Hyperpro was added, while a J.W. Speaker LED headlight was selected for a modern sporty twist.

While the majority of work was undertaken by the MotoShed group, they also wanted to involve other experts. “The difference between a good custom and a great custom is all in the detail. Having worked in the motorcycle industry for many years, we’ve all made some great contacts with some of the best people in their field, people who can really make all the difference on our projects,”

The MotoShed guys say. Experts they called in for their specialist skills included Chris Walton of CW Engineering, who hand-made the sheet metal elements, such as the headlight nacelle, front mud guard, and rear hugger, and Steve Adams, an ex-Aston Martin upholsterer, who refinished the 1920 Solo Saddle Seat and Illusion Race Paint. 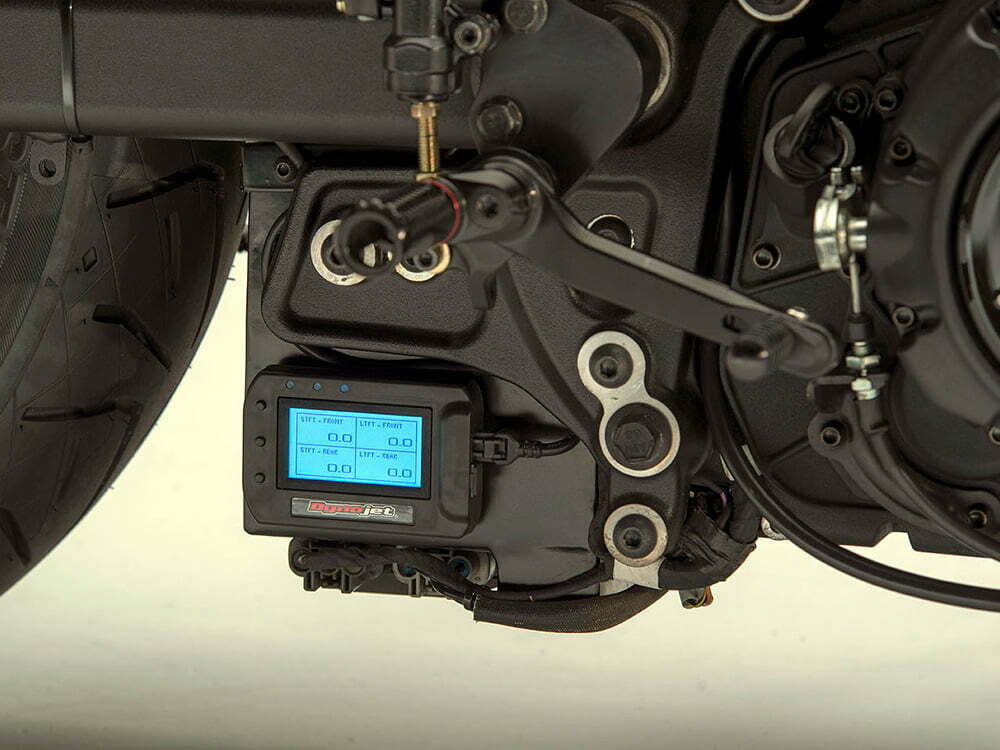 With such short pipes, a Dynojet Power Vision CX system was incorporated to log data and help remap the ECU and fly-by-wire throttle. “It’s fair to say that, right now, it is a bit too loud. It fuels perfectly and the throttle response is excellent but we will be making it a bit quieter.” 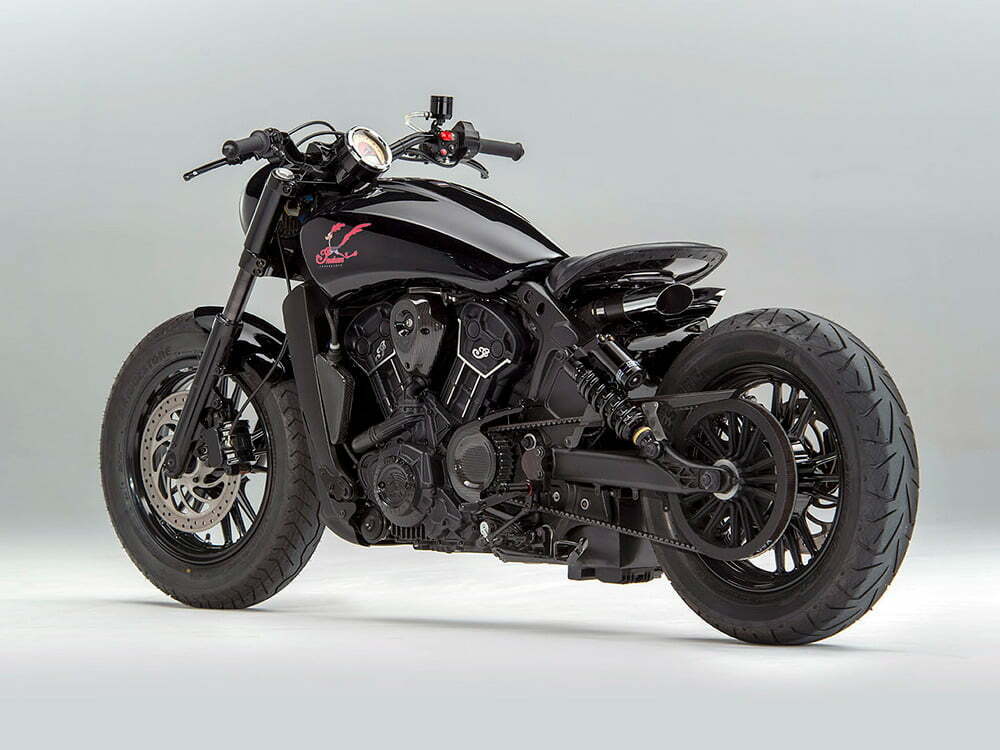 The new riding position is much more aggressive, tilting the rider forward, while rearsets also increase the cornering clearance. Ground clearance is also improved via the stiffer suspension setup which holds the bike higher with more controlled compression when cornering. 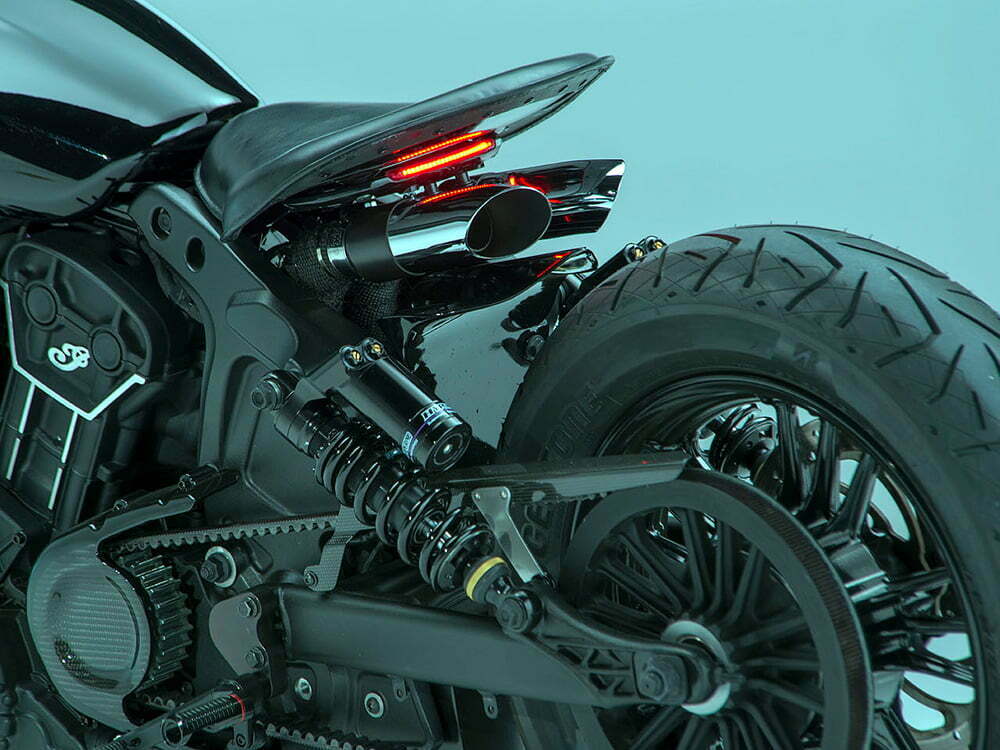 Beyond the exhaust, the team had other ideas too. “We could tell the Scout had potential, so we wanted to push the riding experience by dramatically increasing its cornering performance. To match this increased ability, we also wanted to strip the bike back to the essentials.” 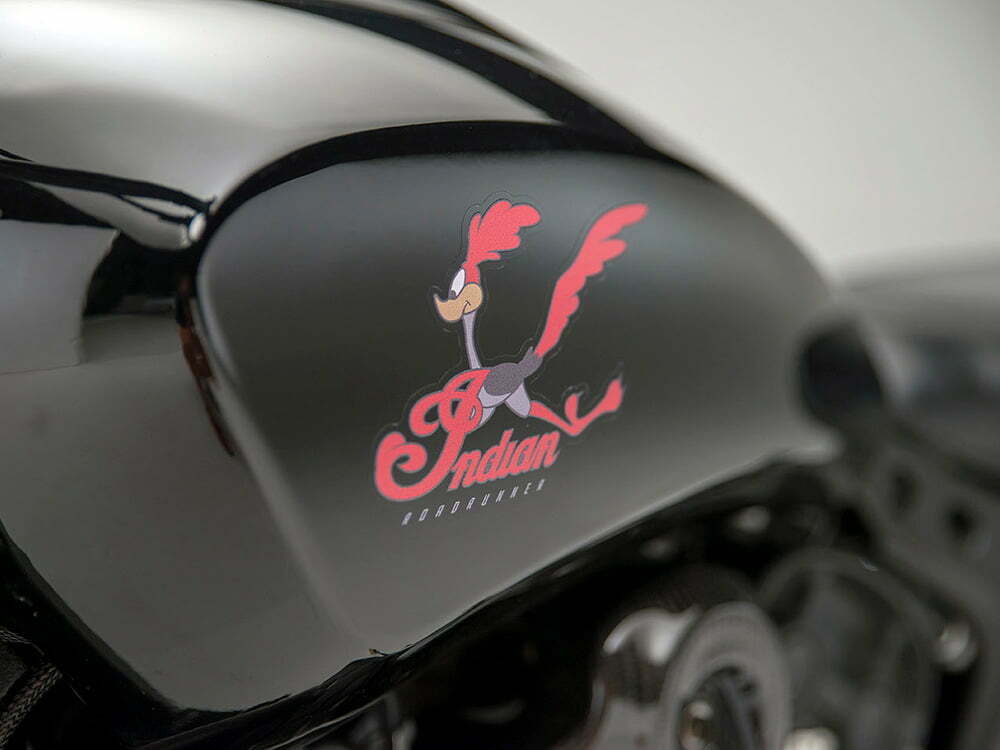 With such significant changes to the Scout and with the team’s vision fulfilled of creating a sportier version that retained a factory look, the only thing left to do was to give it a unique identity. And so, the Road Runner-themed logo was designed and applied as the finishing touch. 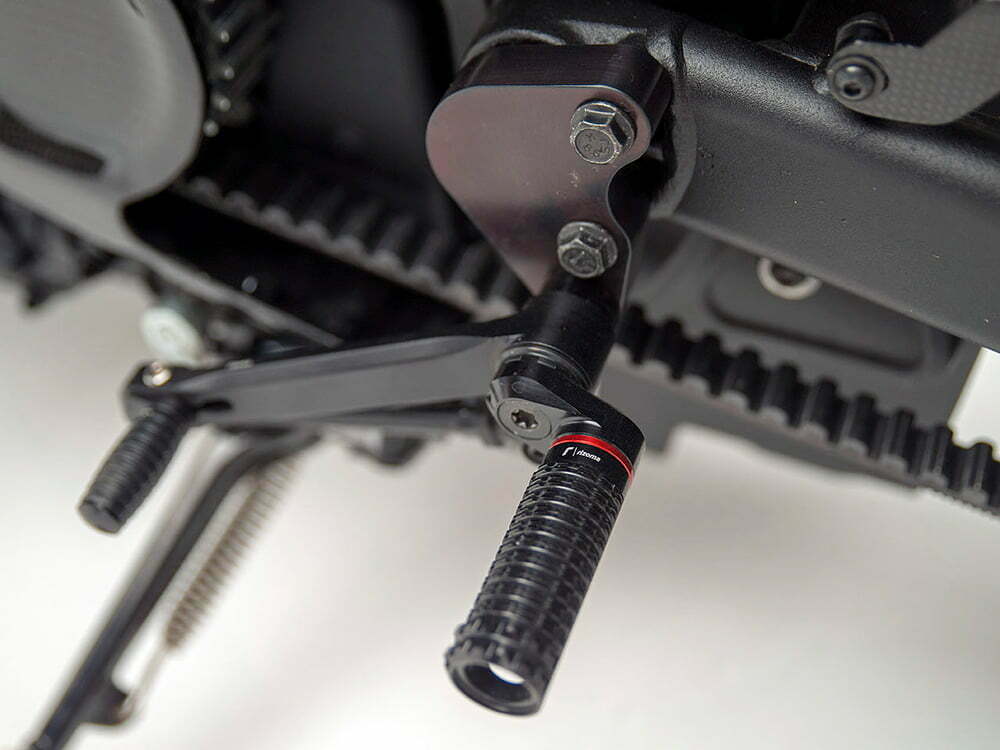