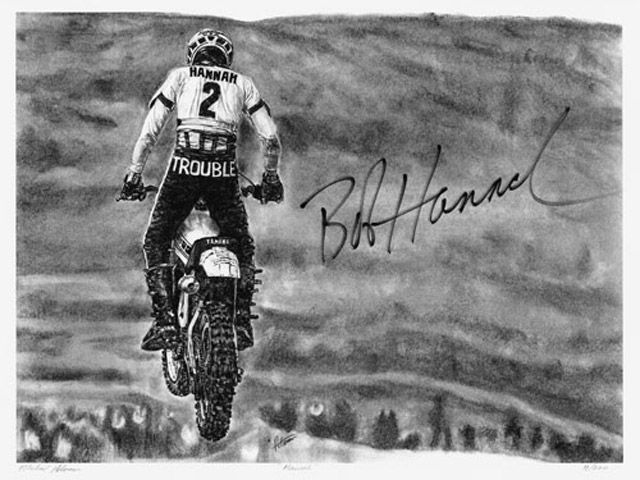 **PICKERINGTON, Ohio — **Ask any motocross fan to name the greatest American racers of all time, and Bob “Hurricane” Hannah is sure to make the list. Hannah’s immense popularity helped the sport of motocross explode in the late 1970s, and on Friday, Nov. 19, he will be honored as a Motorcycle Hall of Fame Legend at the annual Motorcycle Hall of Fame Induction Ceremony at the Red Rock Casino, Resort and Spa in Las Vegas, Nev.

When Hannah was inducted into the Motorcycle Hall of Fame in 1999, he had seven AMA National Championships to his credit, and was one of only two riders in the history of AMA racing to win championships in 125 and 250cc motocross and Supercross competition.

His moniker, “Hurricane,” was bestowed on him in 1975 by a track announcer one year before the relatively unknown 19-year-old Californian stormed onto the professional racing scene. Hannah’s victory at the first round of the AMA 125cc National Motocross Championship at the famous Hangtown racetrack near Sacramento was the first of a record 70 that he would earn during his 15-year career.

Hannah was born in 1956 in Lancaster, Calif. He grew up riding in the rugged southern California deserts with his father and got his first bike, a customized Honda 55, when he was 7 years old. By the time he took to the local motocross tracks at age 18, Hannah was more than ready. His amateur debut was so successful that local racing officials told the determined youngster he would have to advance to the expert ranks.

Hannah signed with Yamaha in 1976 and immediately won the AMA 125cc National Motocross Championship. In 1977, he hopped aboard a Yamaha 250 and won the AMA Supercross Championship in impressive fashion. Hannah moved up to the 250cc outdoor Nationals full time in 1978, winning eight consecutive events to take the title, a record that still stood at the time of his Hall of Fame induction. Counting his titles in Supercross and the fall Trans-AMA Series that same year, Hannah’s career was at its zenith.

Hannah dominated Supercross and the 250 outdoor Nationals in 1979, winning both titles. Then, a water skiing accident on the Colorado River left him with a shattered leg and nearly cost him his career.

Though he sat out the entire 1980 season to recover, Hannah was able to return to competition, and he won 20 more Nationals during the 1980s. He also represented the USA three times in the prestigious Motocross des Nations, and was a member of the victorious 1987 team when the event was held in New York.

Hannah’s recognition at the 2010 Hall Fame inductions marks the first time an existing Hall of Famer will be honored alongside new inductees, and his presence is highly anticipated by the hundreds of family members, friends, industry members and fans who will be in attendance at the Nov. 19 ceremony.

A full slate of activities at the Red Rock follows the induction ceremony.

On Saturday, Nov. 20, the 2010 Motorcycle Hall of Fame Concours d’Elegance will showcase some of the country’s most impressive original and restored classic motorcycles. Also on display will be the world’s fastest motorcycle, the Top 1 Oil Ack Attack streamliner — a twin-engined, streamlined blue bullet that recently set the outright motorcycle land speed record of more than 376 mph on the Bonneville Salt Flats in Utah.

Then at noon on Saturday, the AMA honors the best of the amateur racing community at the 2010 AMA Racing Championship Banquet, presented by World of Powersports, and co-hosted by announcers Laurette Nicoll and Griff Allen.

Saturday evening marks the Las Vegas debut of the movie “Carlsbad USGP: 1980,” a look at an iconic motocross race that some have dubbed “the Woodstock of motorcycling.”

A number of the weekend attendees are also expected to zip across town for the season finale of the AMA GEICO EnduroCross Series on Saturday evening at the Orleans Arena. Ticket information is available at EnduroCross.com.

For a complete schedule of the AMA Legends & Champions Weekend, including information about tickets and substantially reduced-rate accommodations, visit

About the American Motorcyclist Association
Since 1924, the AMA has protected the future of motorcycling and promoted the motorcycle lifestyle. AMA members come from all walks of life, and they navigate many different routes on their journey to the same destination: freedom on two wheels. As the world’s largest motorcycling rights organization, the AMA advocates for motorcyclists’ interests in the halls of local, state and federal government, the committees of international governing organizations, and the court of public opinion. Through member clubs, promoters and partners, the AMA sanctions more motorsports competition and motorcycle recreational events than any other organization in the world. AMA members receive money-saving discounts from dozens of well-known suppliers of motorcycle services, gear and apparel, bike rental, transport, hotel stays and more. Through its support of the Motorcycle Hall of Fame Museum, the AMA preserves the heritage of motorcycling for future generations. For more information, please visit AmericanMotorcyclist.com