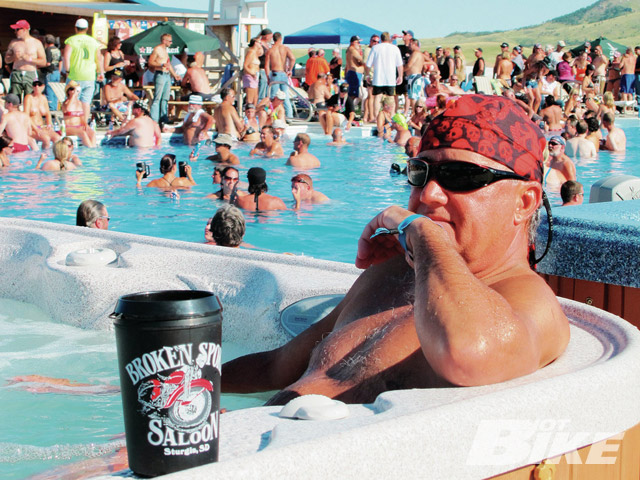 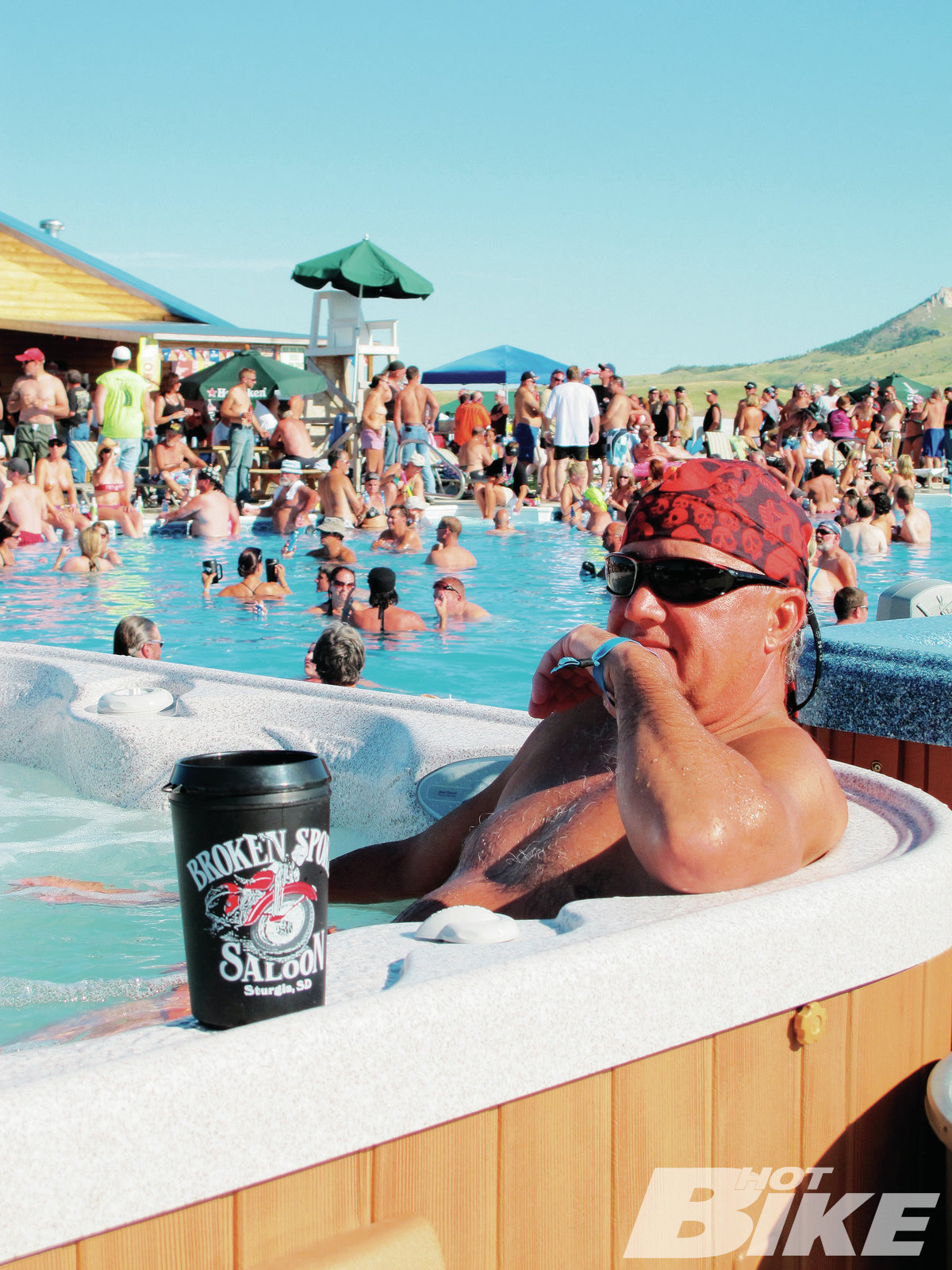 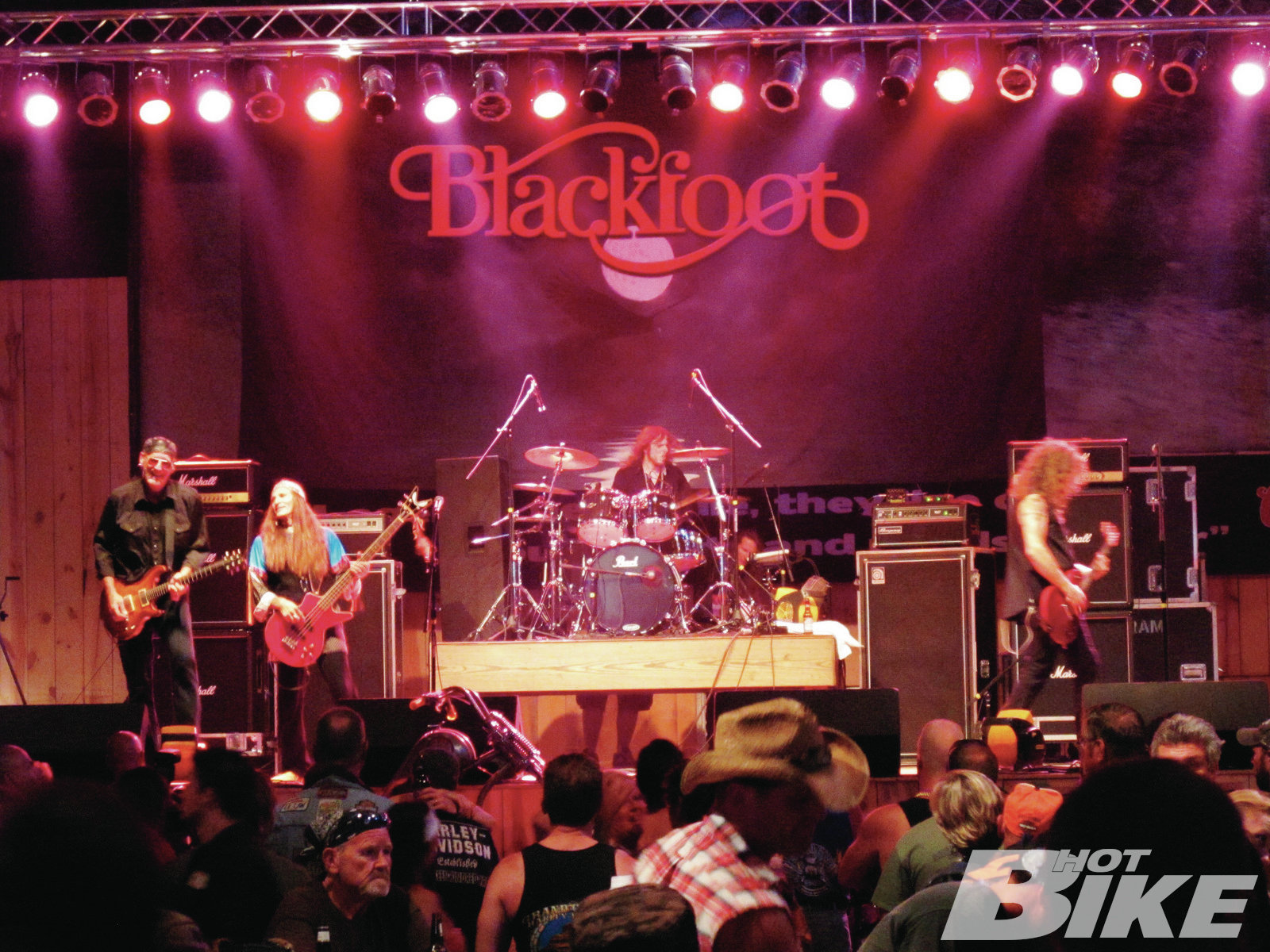 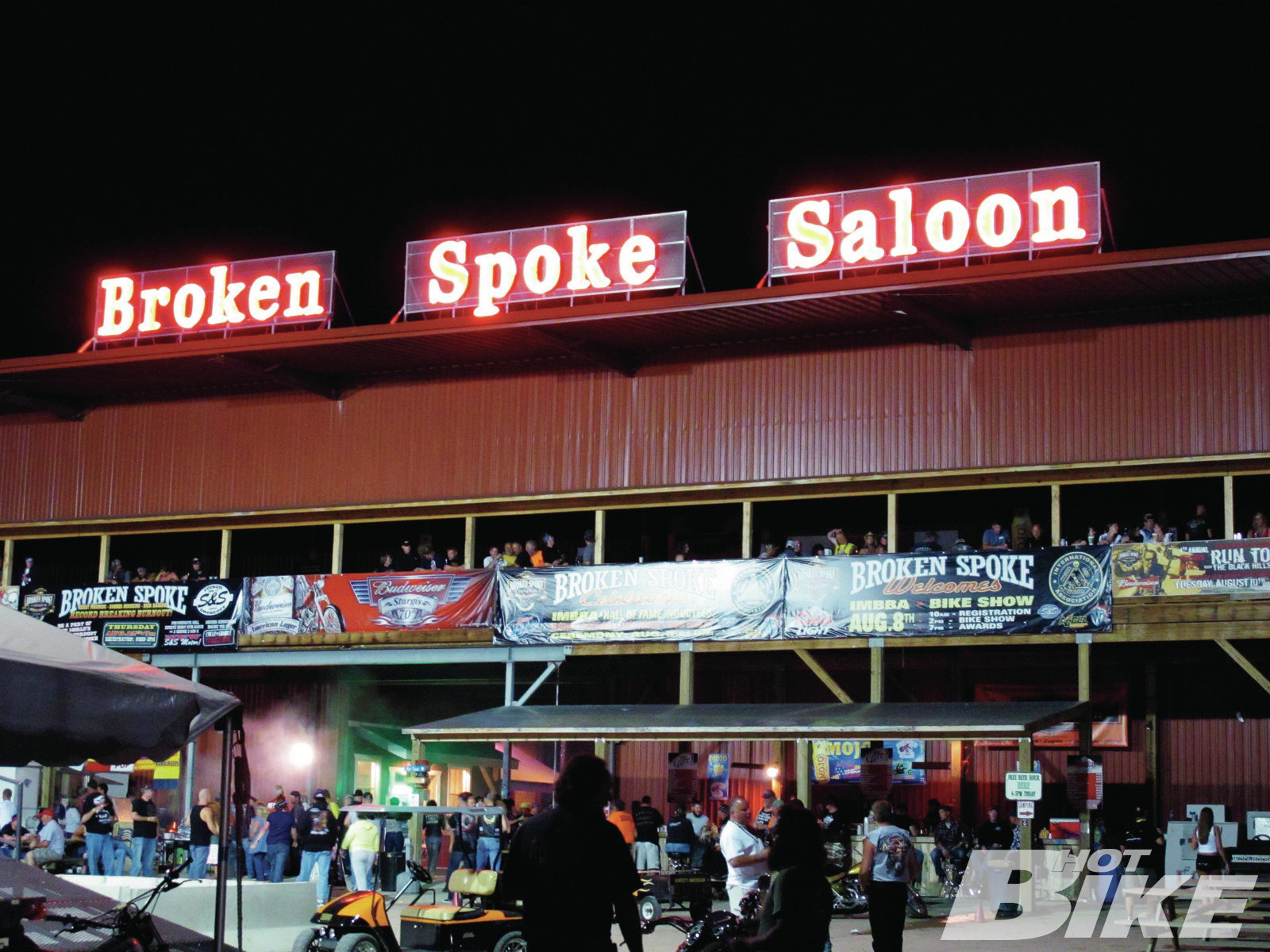 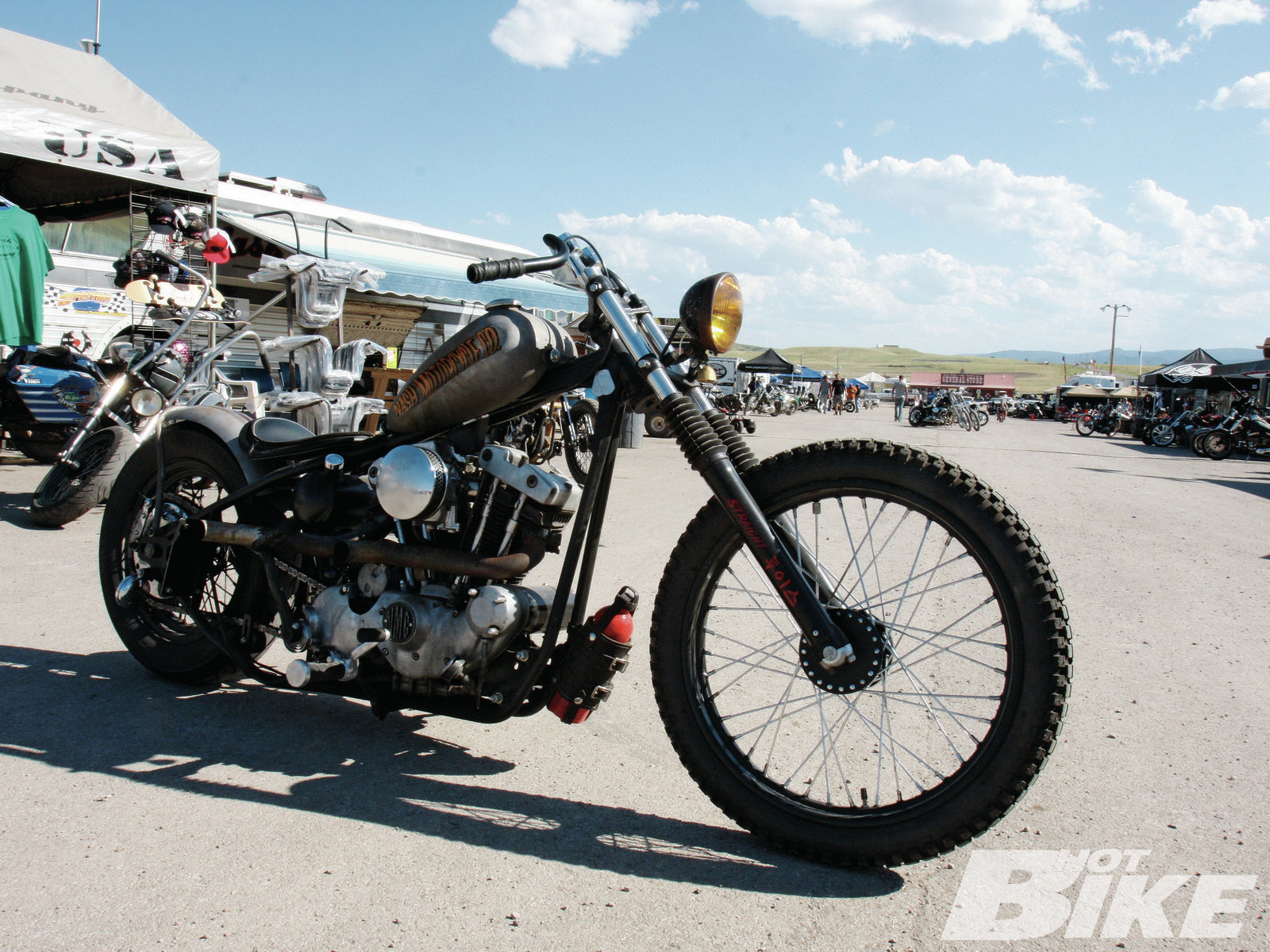 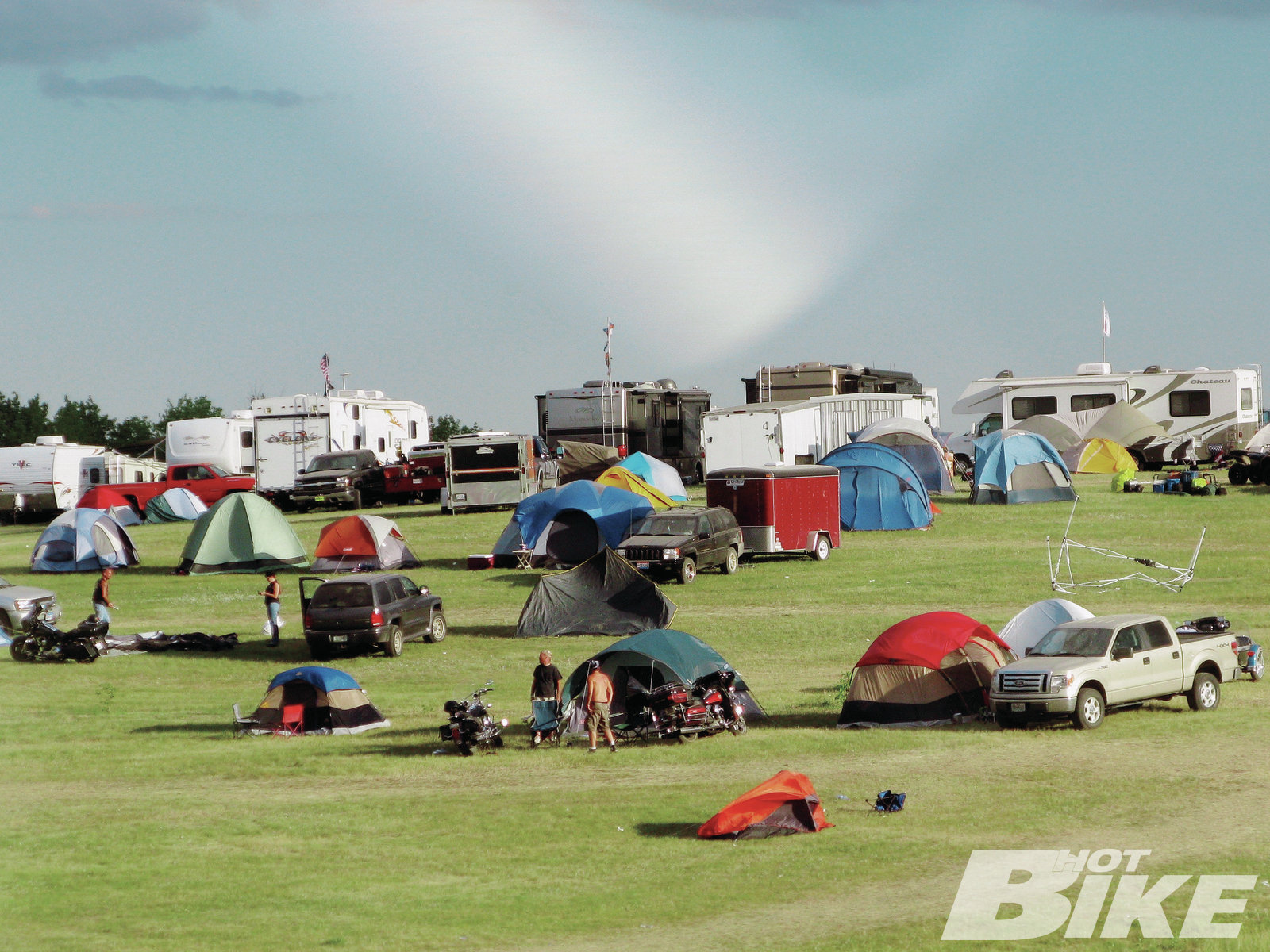 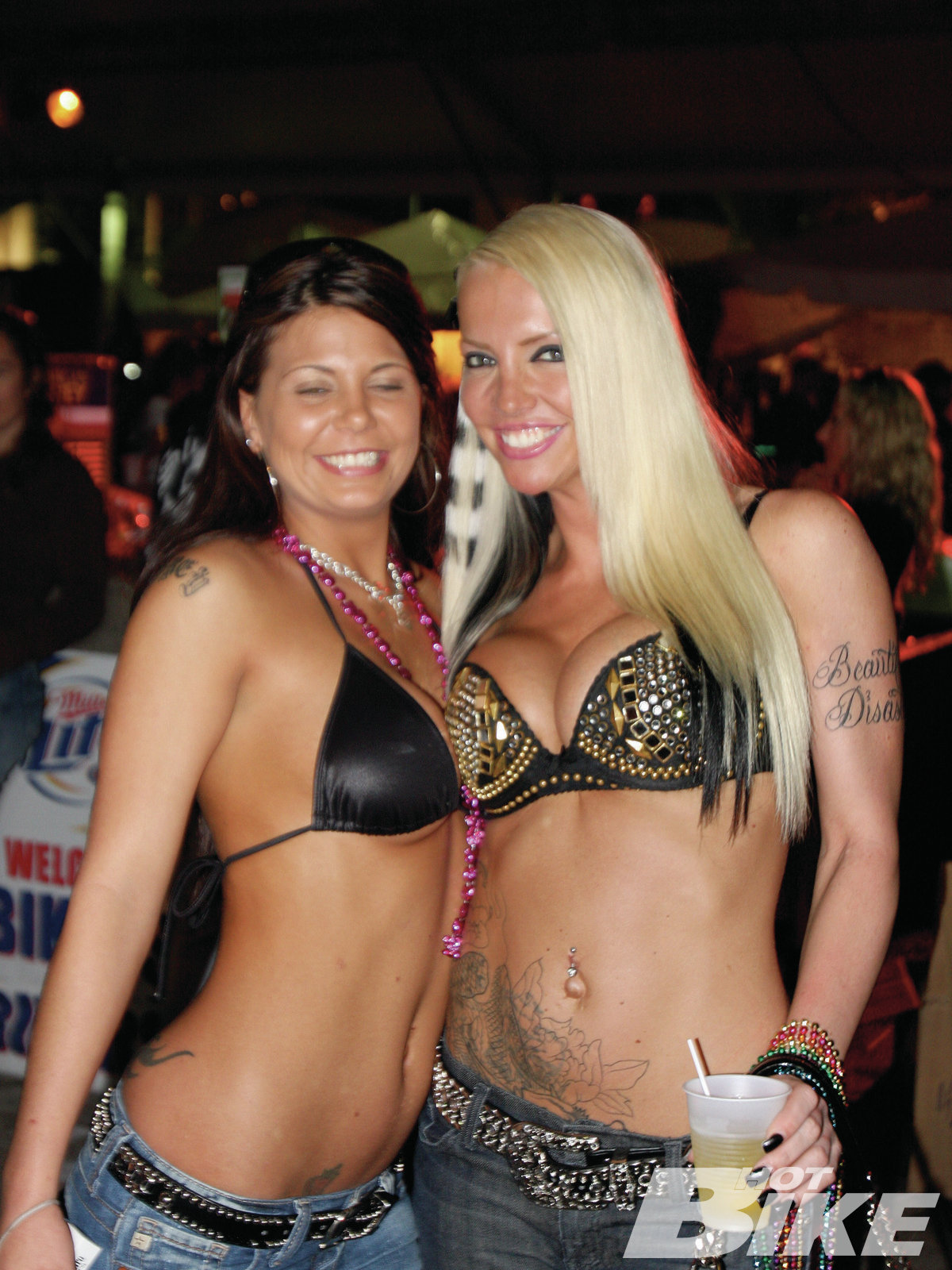 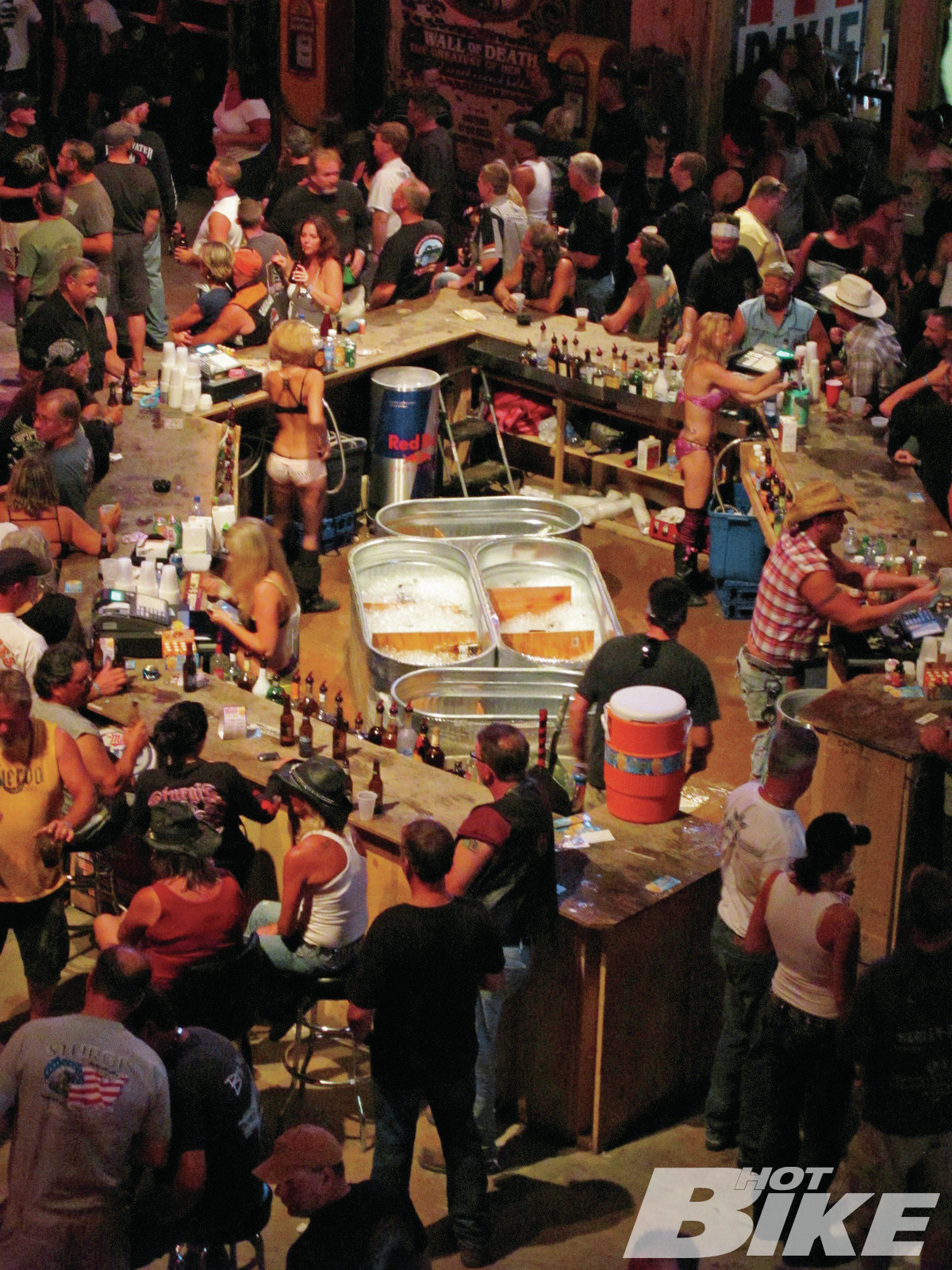 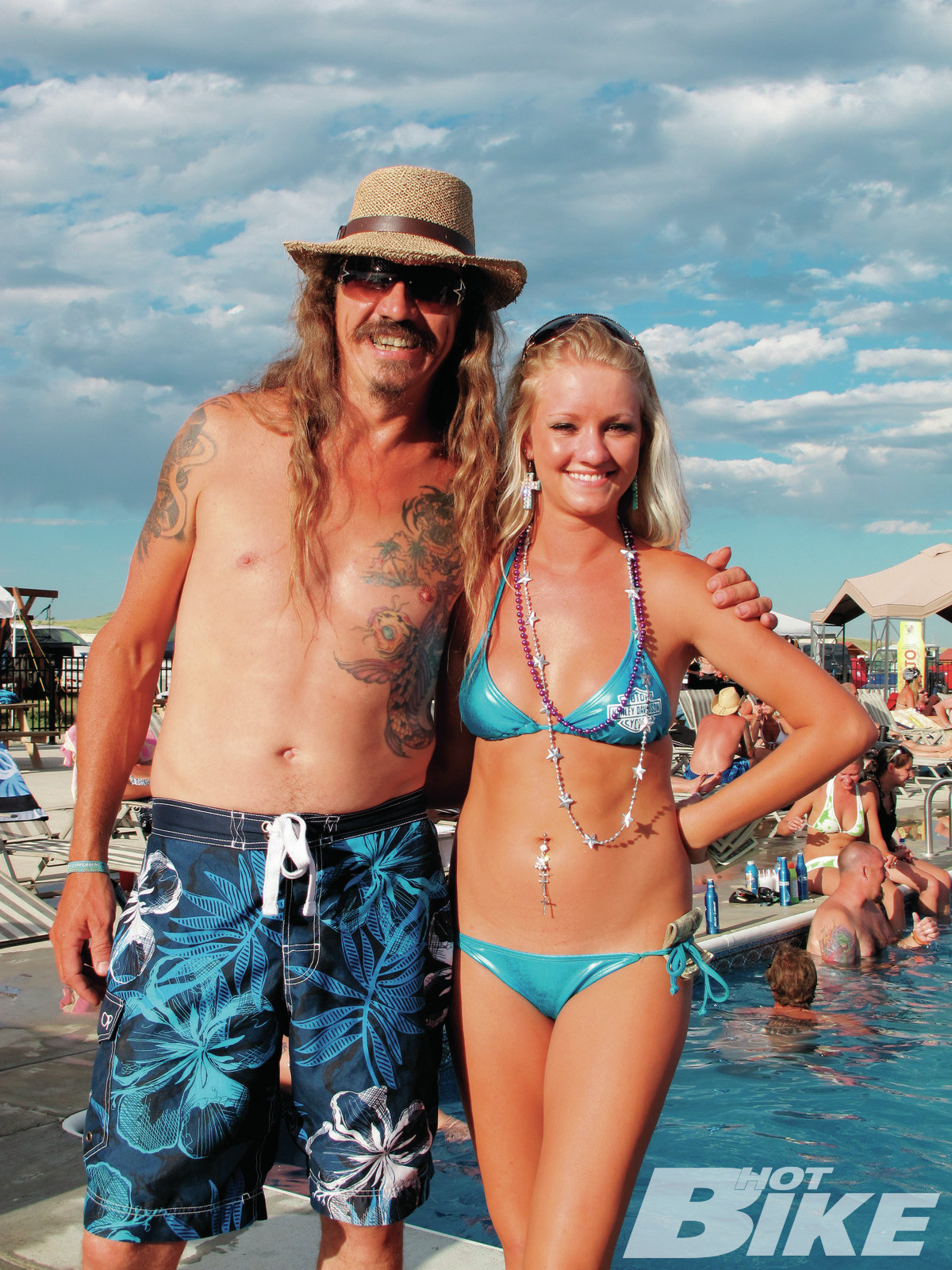 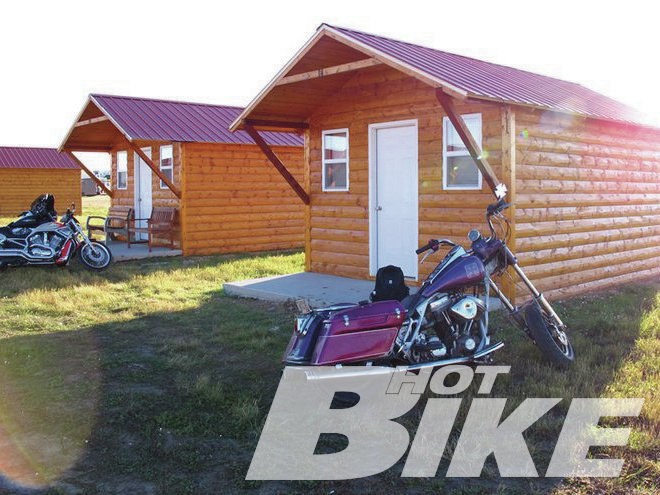 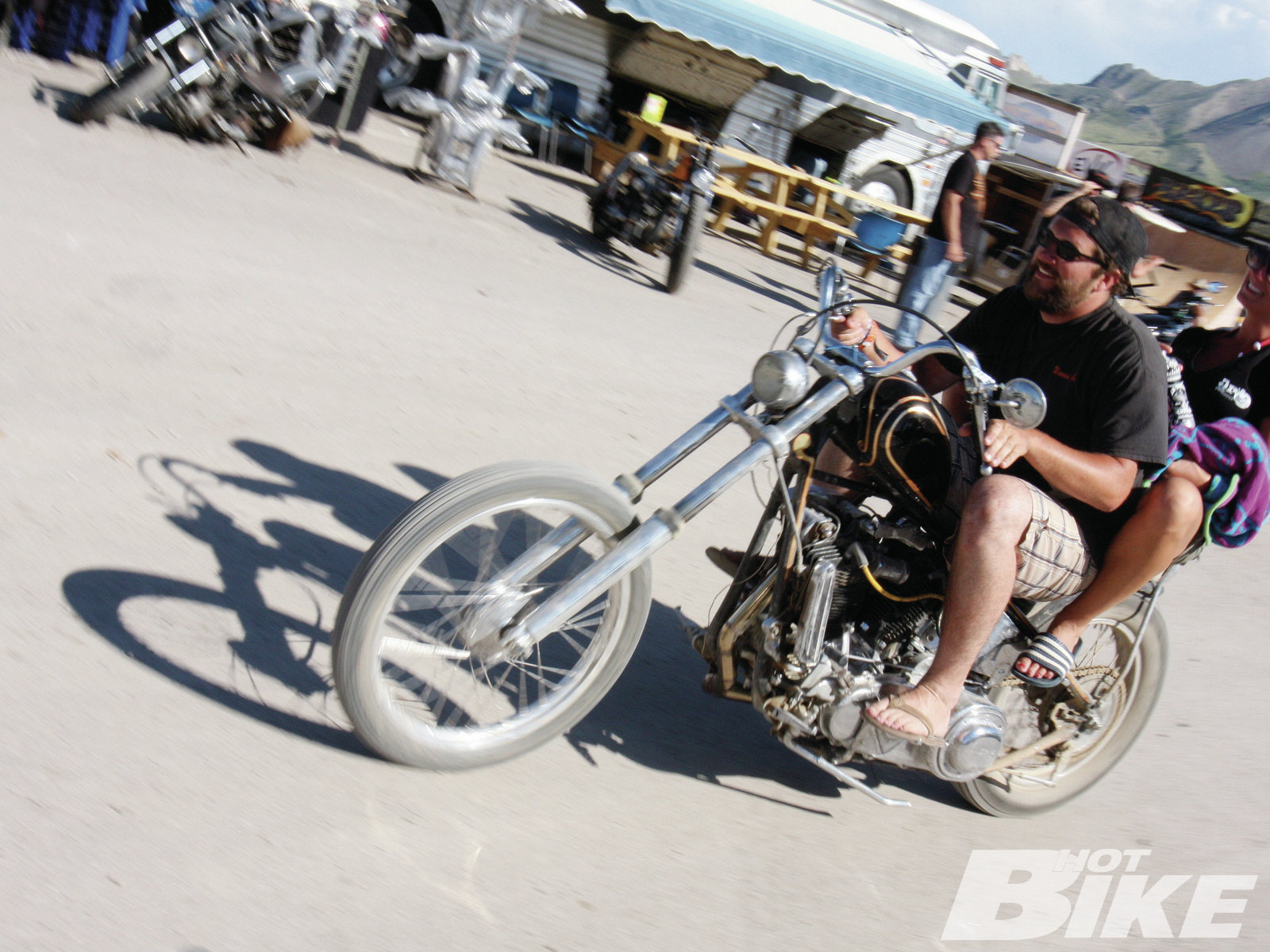 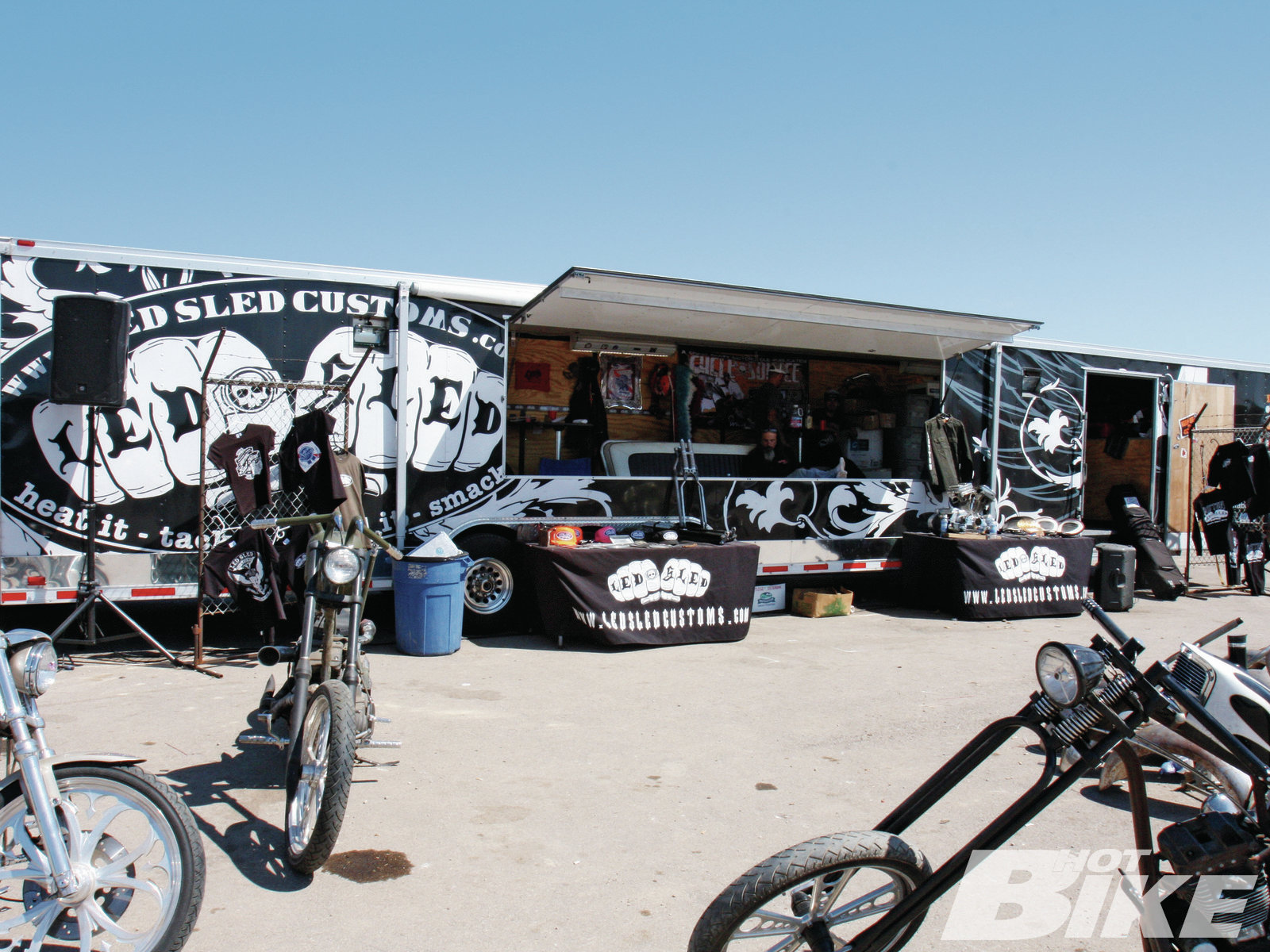 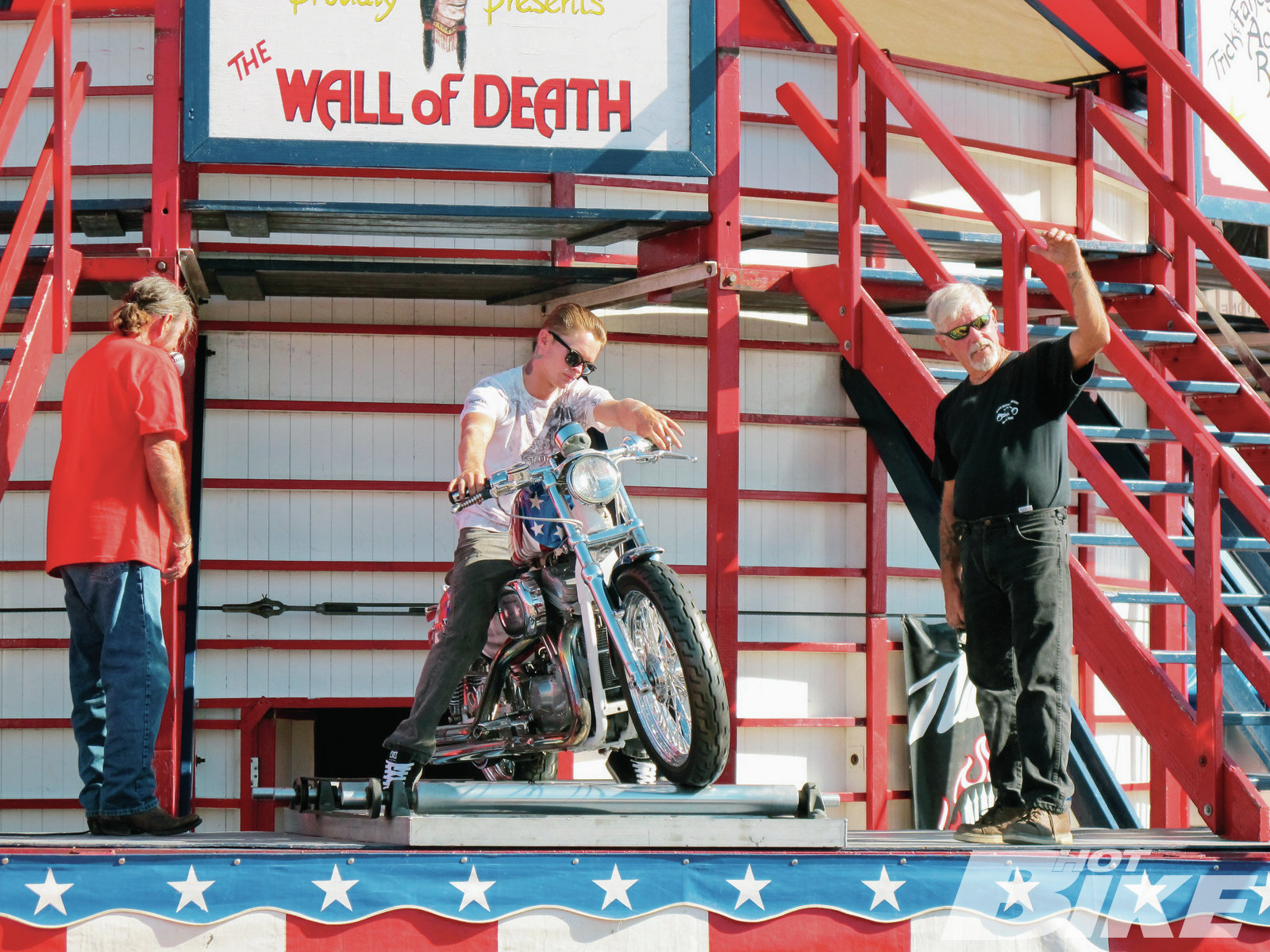 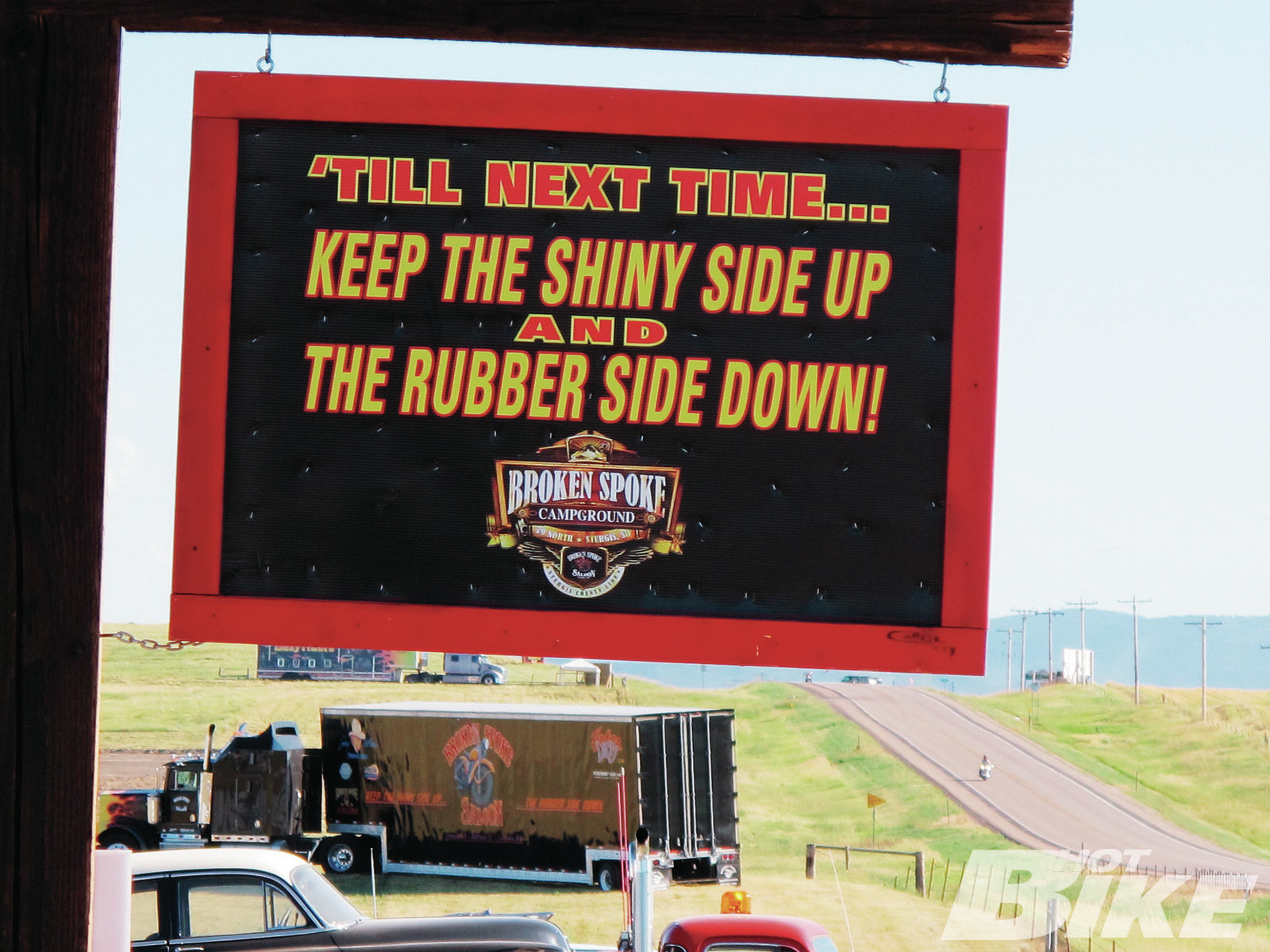 Don’t worry riders, there are plenty of bike-centric goings on, such as loud pipe, Baker Drivetrain Smoke-down Showdown, and S&S; Smokeout burnout contests.

Located on Highway 79, north of Sturgis, is the the Broken Spoke Campground. This 600-acre compound has an eclectic mix of events, sights, and sounds going on during the Black Hills Rally. It truly is like no other Sturgis experience. Whether you have a $20 tent from Big 5 or a $500,000 Prevost bus, there is a camping spot for you. During Sturgis tent camping is a flat fee of $119 per person and RV spots with hookups start at $425.

If you don’t want to camp, you can sleep comfortably in one of the Spoke’s on-site air-conditioned cabins that feature parking, a fridge, front porch, and barbecue grill. Cabin rentals are a flat 13-day rental during the rally and will run you no more than $2,250 for up to four people.

For when you aren’t resting your head, the Broken Spoke boasts a legendary ride-thru 45,000square-foot bar staffed by some of this country’s hottest bartenders. The saloon also houses a tattoo shop and a martini/hooka bar upstairs.

For music lovers, there are four separate stages hosting big and popular national acts nightly as well as thrill and freak shows.

Sturgis is known to have some warm weather that time of year, so the Broken Spoke stepped up and installed a giant plus-sized outdoor pool with bikini-clad bartenders. The pool is surrounded by 25,000 feet of concrete decked out with lounge chairs, music, and hot tubs. With all this happening, there is no telling what kind of adult antics and tomfoolery you will run into while taking a dip.

Don’t worry riders, there are plenty of bike-centric goings on, such as loud pipe, Baker Drivetrain Smoke-down Showdown, and S&S; Smokeout burnout contests, Micheal Lichter/Sugarbear bike ride, and the real-deal bike building antics of the Limpnickie lot, complete with a half-pipe for skating.

The Broken Spoke campground truly is a city of its own and visitors really don’t need to venture off the property, but when you do the Spoke is right in the middle of everything the Black Hills has to offer.