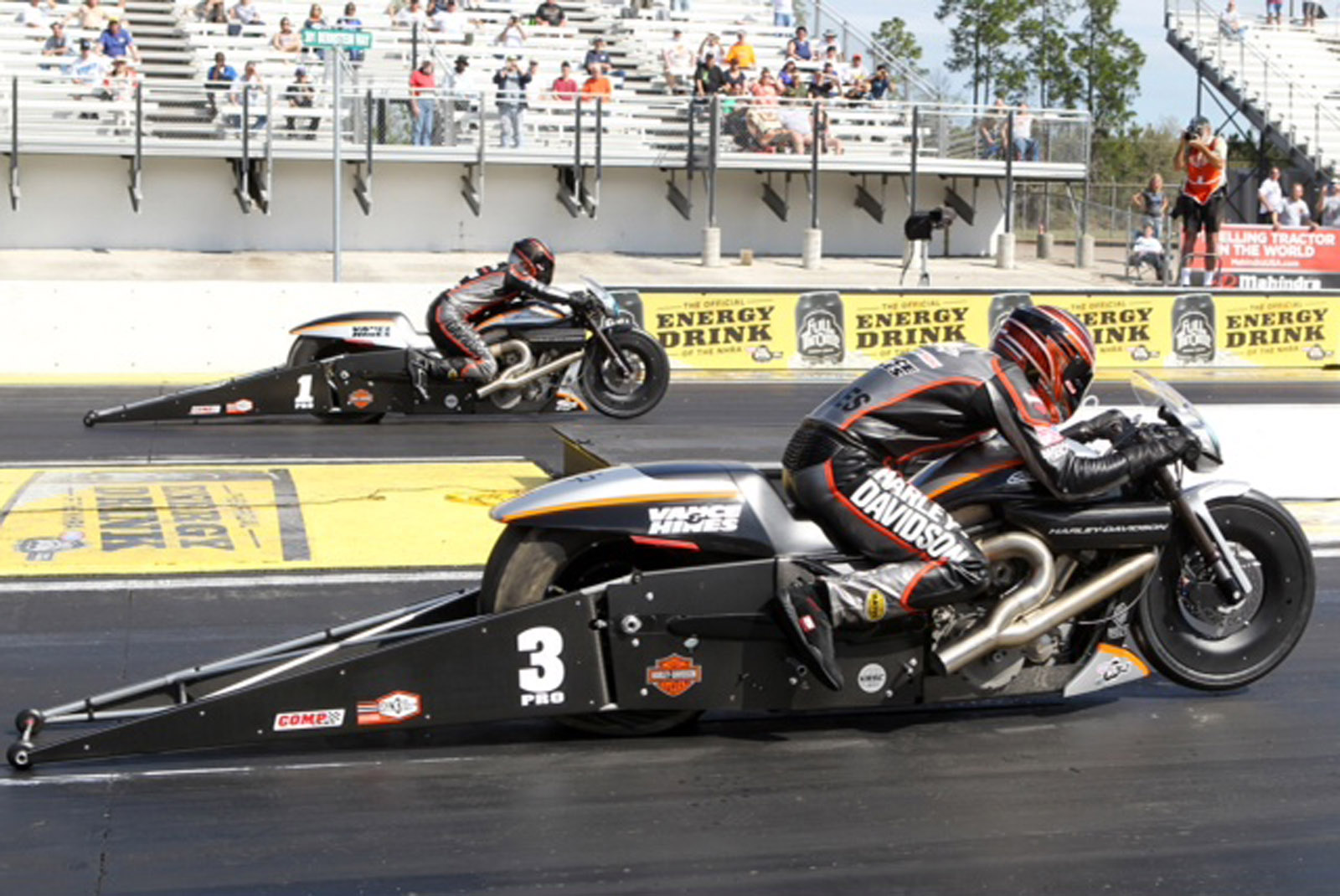 Riding a Harley-Davidson® V-Rod® motorcycle, Krawiec opened the defense of the Pro Stock Motorcycle championship he won last season by leading each round of qualifying, winning four rounds of eliminations, and setting a new national elapsed-time (ET) record for the class. According to the NHRA, Krawiec is only the second racer to score the maximum 150 points available for a race weekend since the organization started awarding bonus points for qualifying.

There was anticipation before the Gatornationals that Krawiec, who set the class speed record of 199.26 mph at last year’s event, could be the first Pro Stock Motorcycle rider to break the 200-mph barrier during the weekend. Instead, the two-time champion took his V-Rod to a new ET record of 6.750 seconds in the third round of qualifying on Saturday, breaking the record of 6.777 seconds set by Lucas Oil Buell rider Hector Arana at Gainesville in 2011.

“I guess if I could have run 200 here it would have been the perfect weekend and I could just retire,” said Krawiec, who also became the first Pro Stock Motorcycle racer to win the season opener at Gainesville in three consecutive seasons. “Unfortunately we didn’t get 200, so I’m not going to retire. We had a great off-season and my V-Rod was running well right off the truck. It’s a nice way to start defending our championship. I’m really excited about this season.”

Hines qualified third for the event with a run of 6.834 seconds.

Krawiec and Hines cruised through the first two rounds of eliminations on Sunday before rain halted the action. Krawiec got wins over Buell riders Ulf Ogge and Scotty Pollacheck. Hines got a win over Buell rider John Hall on a red light and then knocked off Nitro Fish Suzuki rider LE Tonglet in the second round.

In Monday’s semi-final round, Krawiec defeated Matt Smith on the Matt Smith Racing Buell, while Hines scored a win over Lucas Oil Buell rider Hector Arana Jr. to set up an all-Harley final between the Screamin’ Eagle teammates. In the final, Hines lead off the line with a 0.010-second reaction time to 0.033 for Krawiec, but the defending champ took the lead by 100 feet and won with a 6.822-second pass to 6.861 for Hines. Krawiec has now won 12 times in 26 career final-round appearances.

“Count back to Las Vegas and Pomona last season and this is the third consecutive race we’ve put both Screamin’ Eagle V-Rods in the finals, and that’s always our first goal for a race weekend,” said Hines. “It’s sure nice to hit a home run like that to open the season. My bike got better every round, and I think that either Eddie or I will break that 200 mph mark soon. It could happen at Houston, where we’ve put up some fast speeds in the past.”

The Gatornationals also marked the debut of new bodywork for the team’s Harley-Davidson V-Rod racing motorcycles. Inspired by the production Harley-Davidson Night Rod® Special motorcycle, the bodywork was a success in it first race outing, according to Hines. “The new body and paint scheme looks really racy,” said Hines. “Both V-Rod bikes went right down the track this weekend, so it seems to work well.”

Krawiec opens the season leading the Pro Stock Motorcycle division in points with 150. Hines is second with 101 points, followed by Arana Jr. with 80 points, Smith with 74 and LE Tonglet with 56.

The Pro Stock Motorcycles will next race April 27-29 at the O’Reilly Auto Parts NHRA Spring Nationals at Royal Purple Raceway in Baytown, Texas.