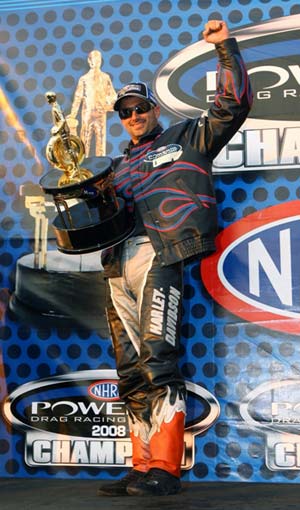 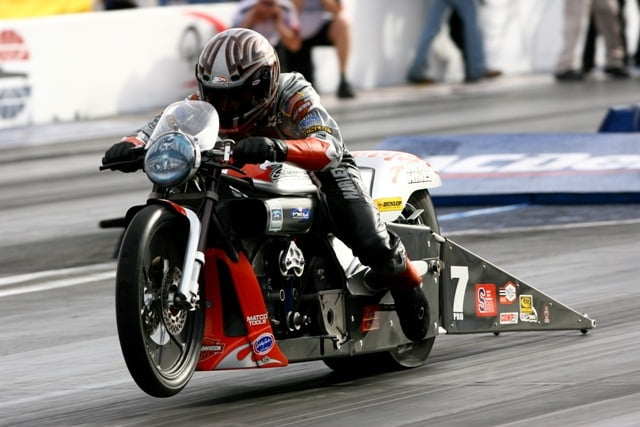 Krawiec has secured 30 bonus points for being the top qualifier for the Countdown. There is still one event – the Mac Tools U.S. Nationals at Indianapolis on Labor Day weekend – on the regular-season schedule before the playoff series begins.
“This means we can go to Indy with no pressure,” said Krawiec. “I went out in the first round there last year, and this time I want to try and win it for the Screamin’ Eagle team.”
Krawiec was the number-four qualifier for the Reading event, with a elapsed time of 7.041 seconds. Screamin’ Eagle/Vance & Hines rider Andrew Hines qualified fifth at 7.042 seconds. Hector Arana used a 6.986 ET to claim the top qualifying position.
The start of the Pro Stock Motorcycle eliminations was delayed by more than three hours due to water seeping through the track surface as it was warmed by bright sun after several days of rainy weather. Hines was eliminated in the first round when his 6.979-second ET was not enough to overcome a 0.128-second reaction time at the start, and the 0.016/7.048 pass of Rocklin Motorsports Buell rider Matt Guidera.
“My motor function was off,” said Hines, who remains a solid second in season points. “I saw the yellow and my brain reacted, but my hand did not release the clutch lever. It’s something that has happened to me in the past. By the time I realized what was going on and let go of the lever, Guidera was gone. I’m just going to move on and set my sights on doing well at Indy.”

Krawiec defeated Kendall Suzuki rider Wesley Wells in the first round, posting a 6.970-second ET that would stand as the quickest Pro Stock Motorcycle run of the weekend. Krawiec advanced to the finals when his next two opponents, Guidera and Arana, fouled at the starting line. Krawiec defeated Phillips 7.138 to 8.153, to take his fourth win in eight final-round appearances this season.

After the Reading event, seven Pro Stock Motorcycle riders have qualified for the 2009 Full Throttle Countdown to the Championship. Guidera will join Krawiec, Hines, Arana, Matt Smith, Doug Horne, and Craig Treble, each of whom qualified at previous events. Only the top 10 points earners in the class will take part in the five-event Countdown playoffs, which begin at the North Carolina Nationals on Sept. 17-20. Those final three Countdown qualifiers will be determined at the next event on the NHRA Pro Stock Motorcycle schedule, the Mac Tools U.S. Nationals, Sept 2-7, at O’Reilly Raceway Park, Indianapolis, Ind.