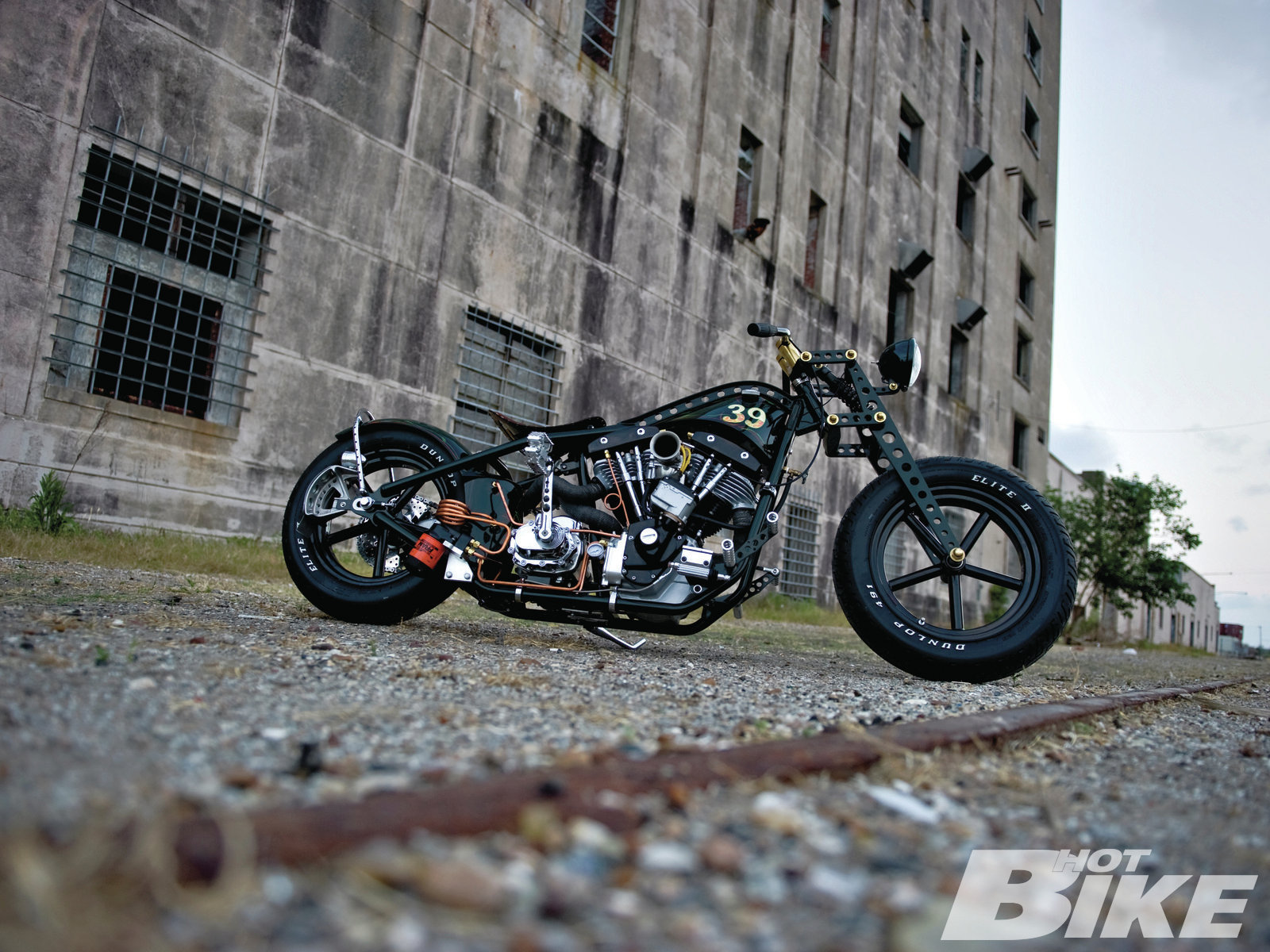 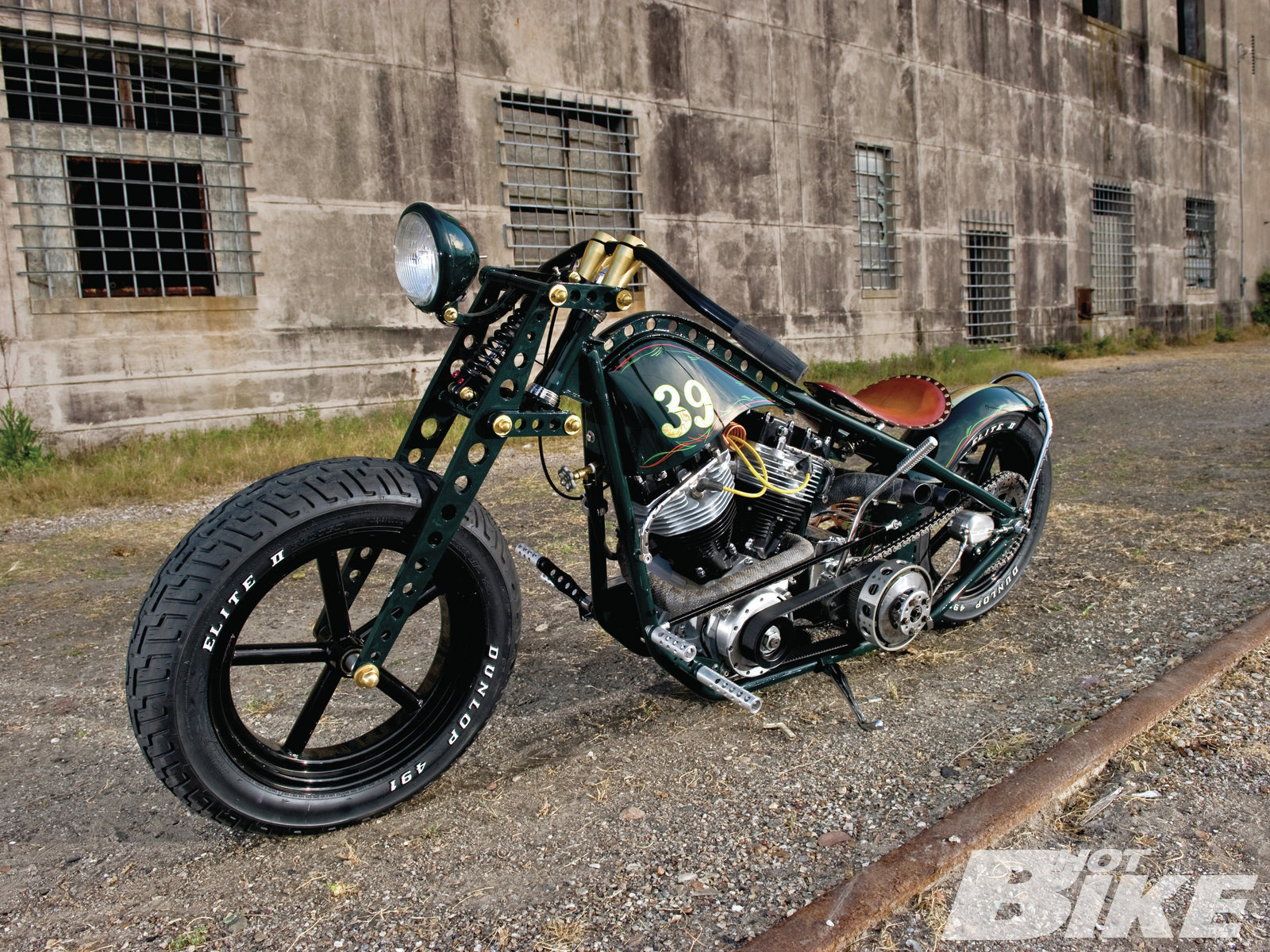 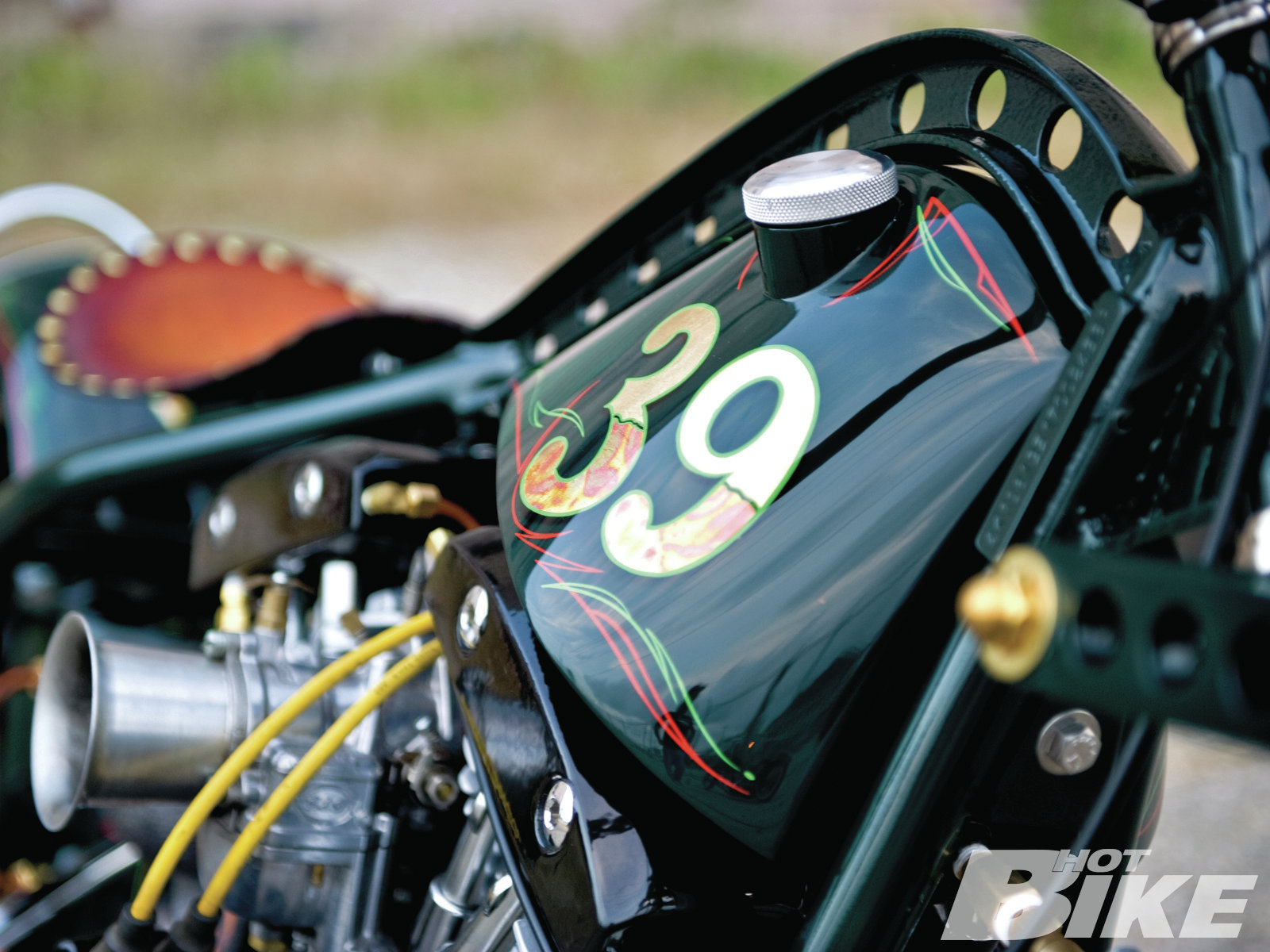 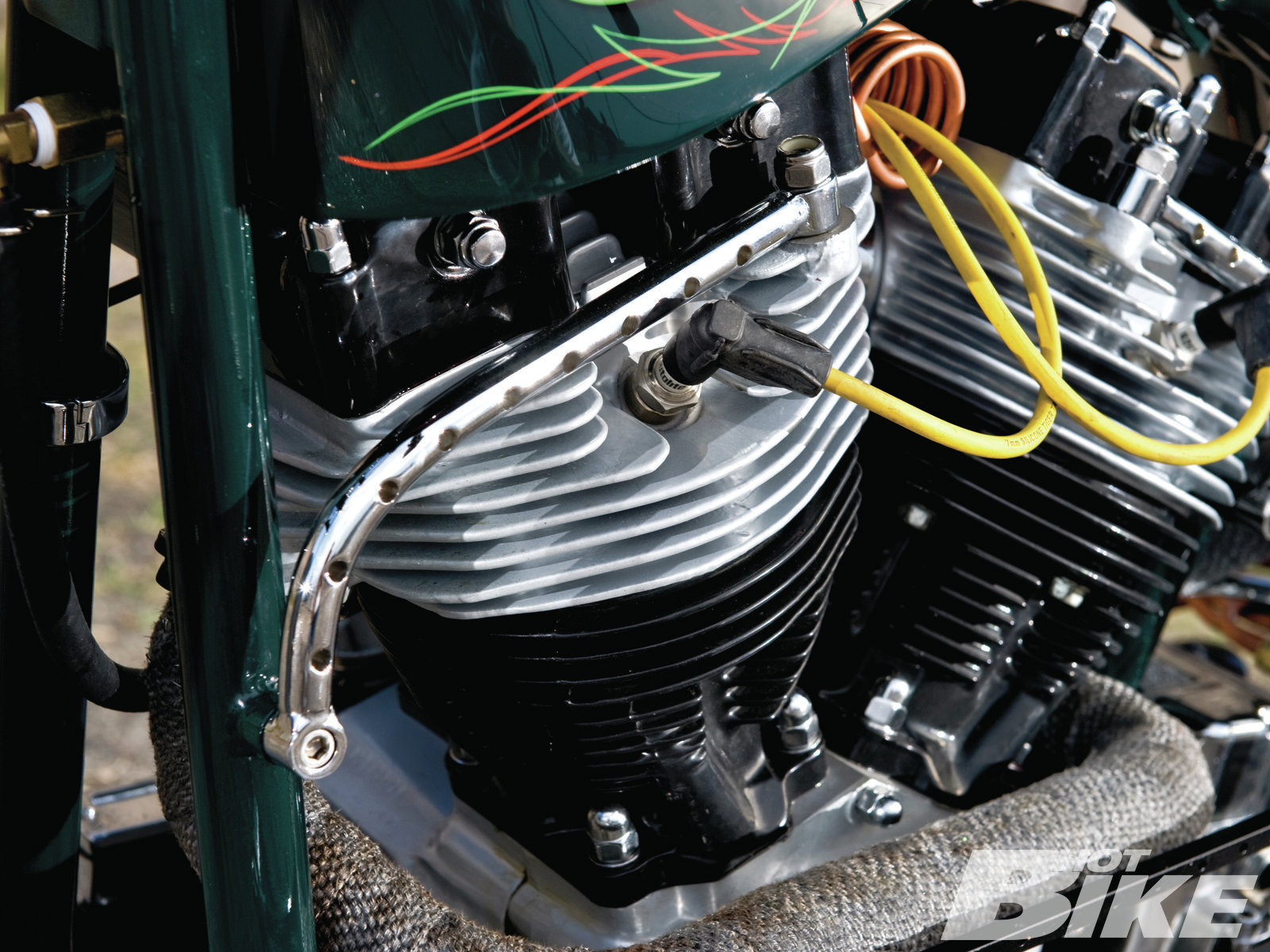 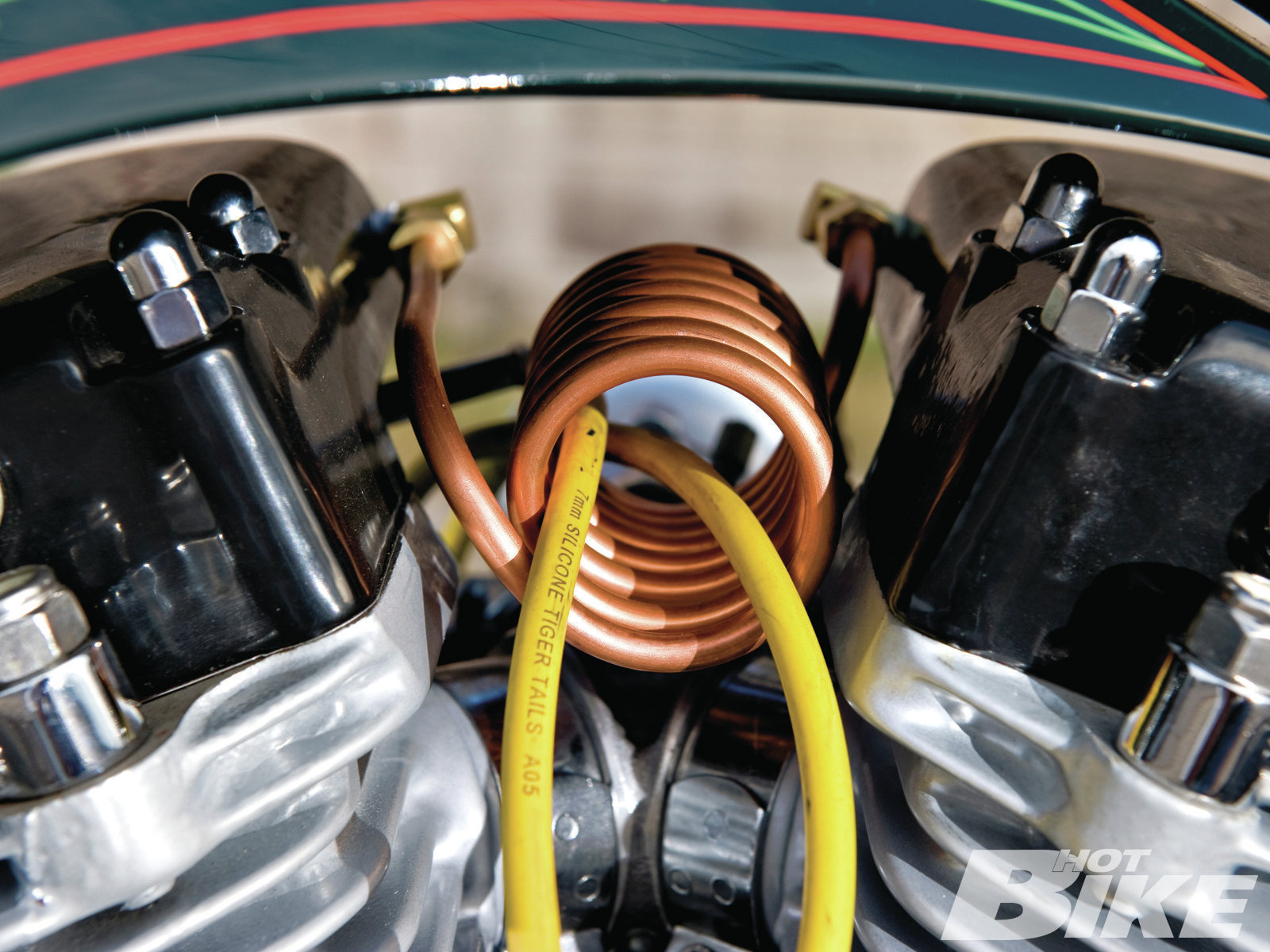 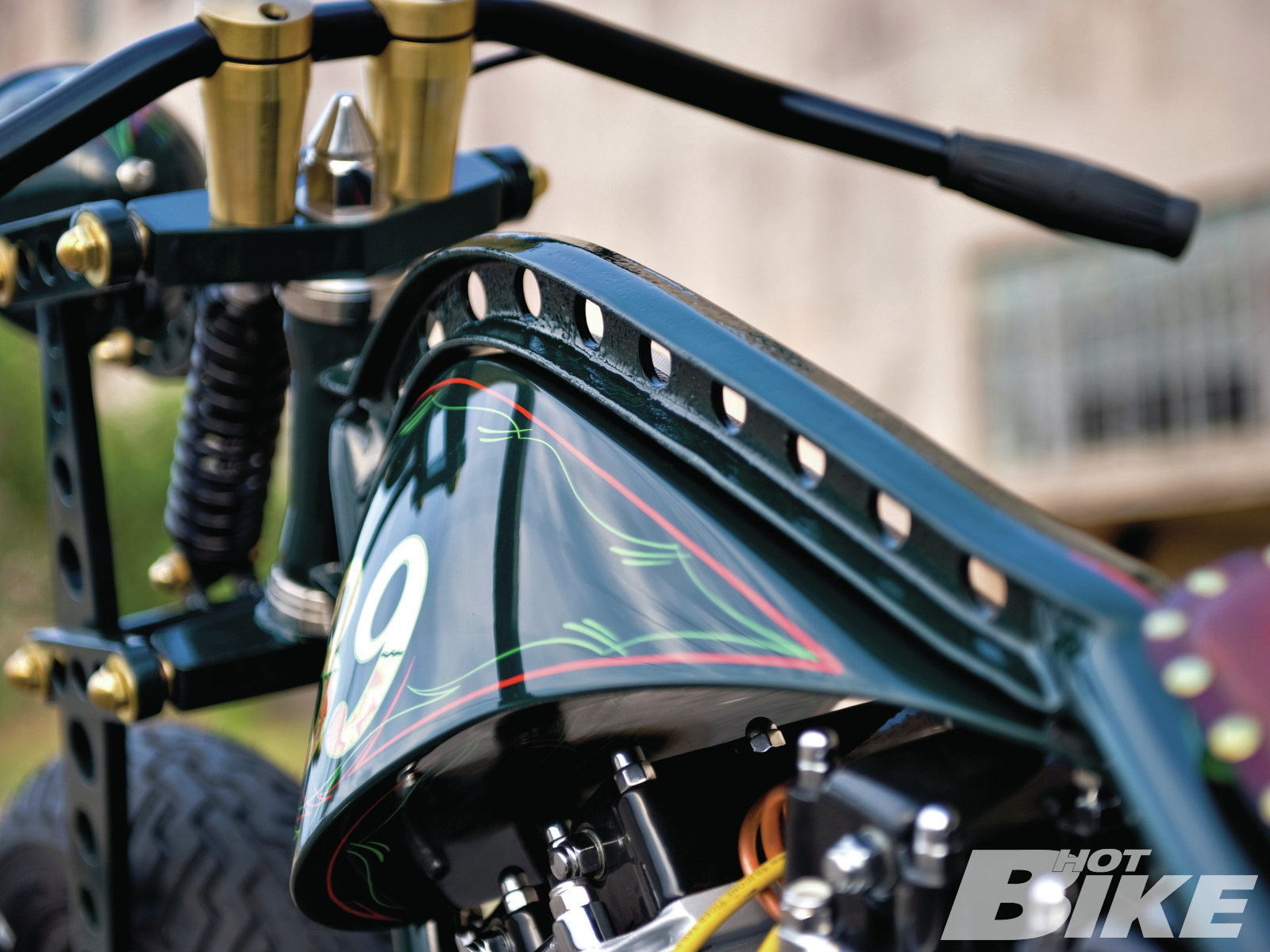 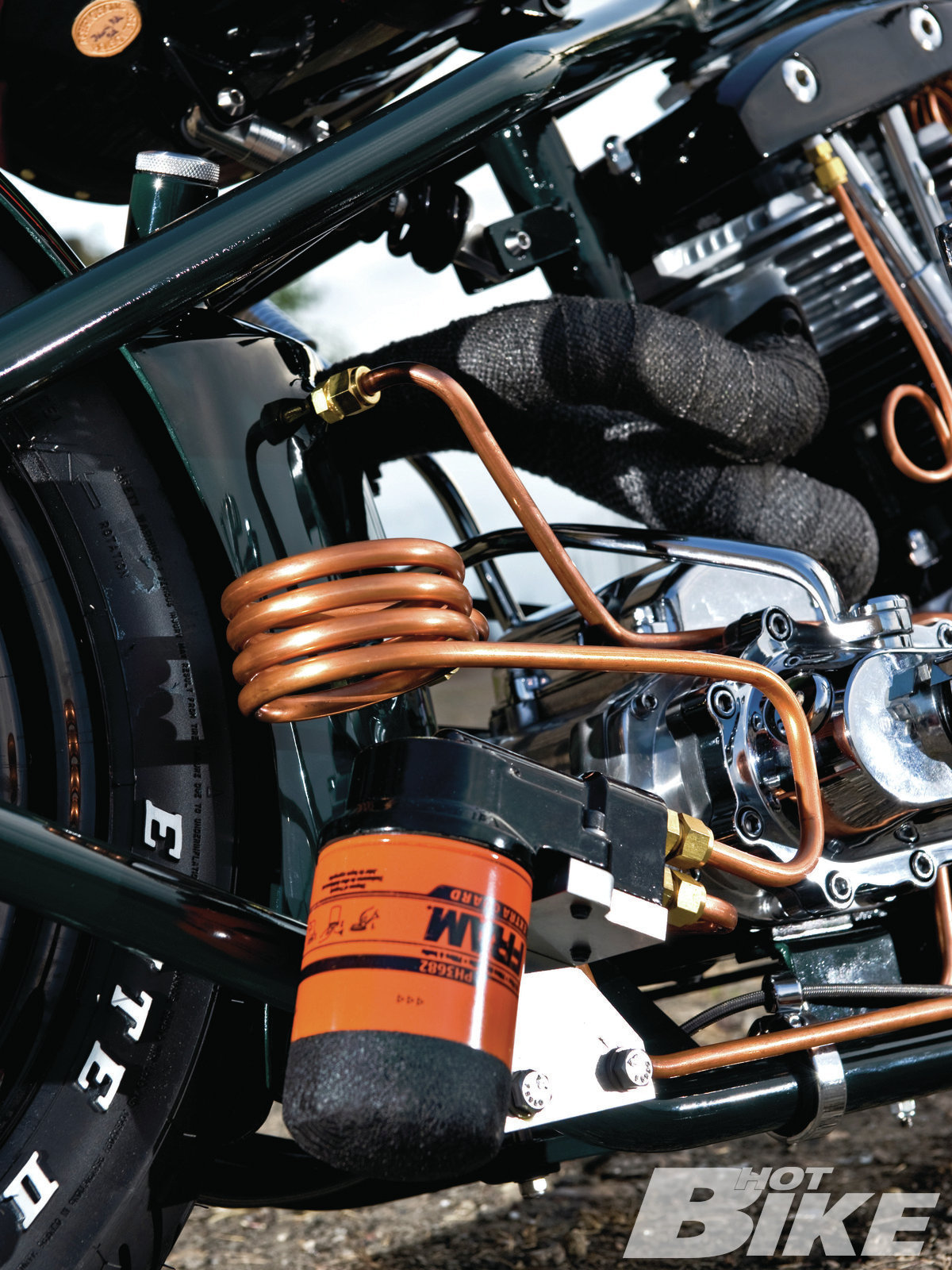 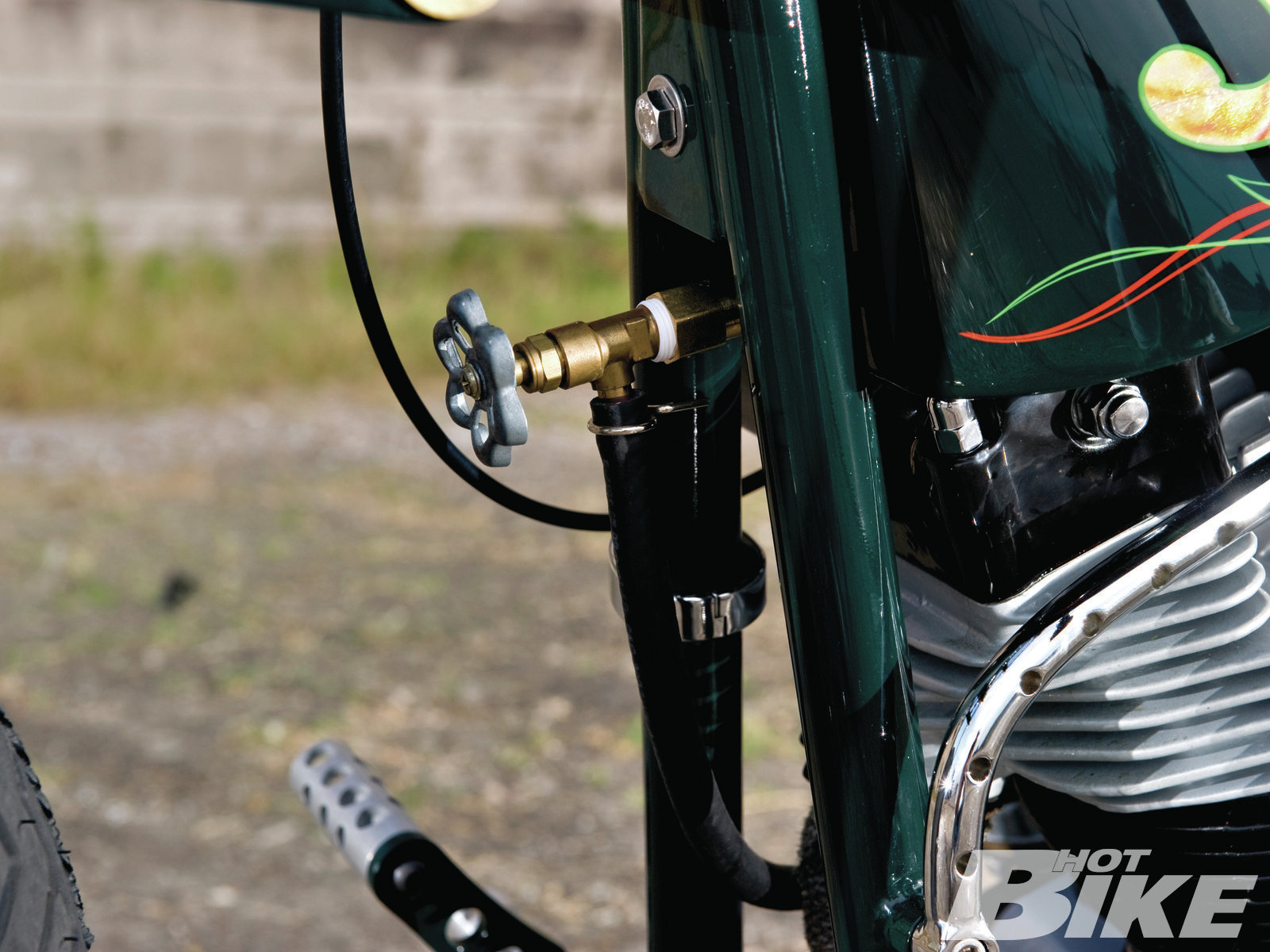 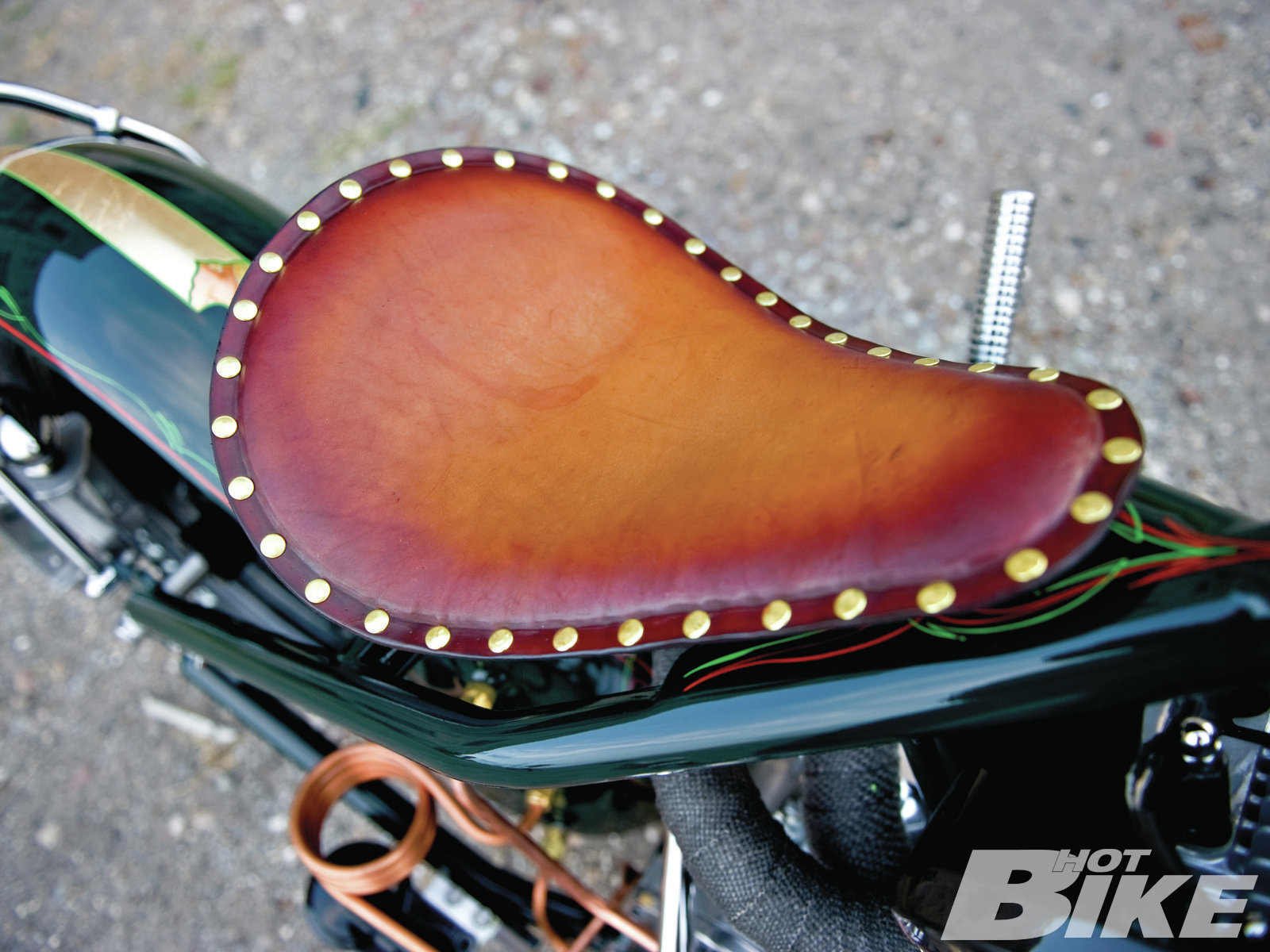 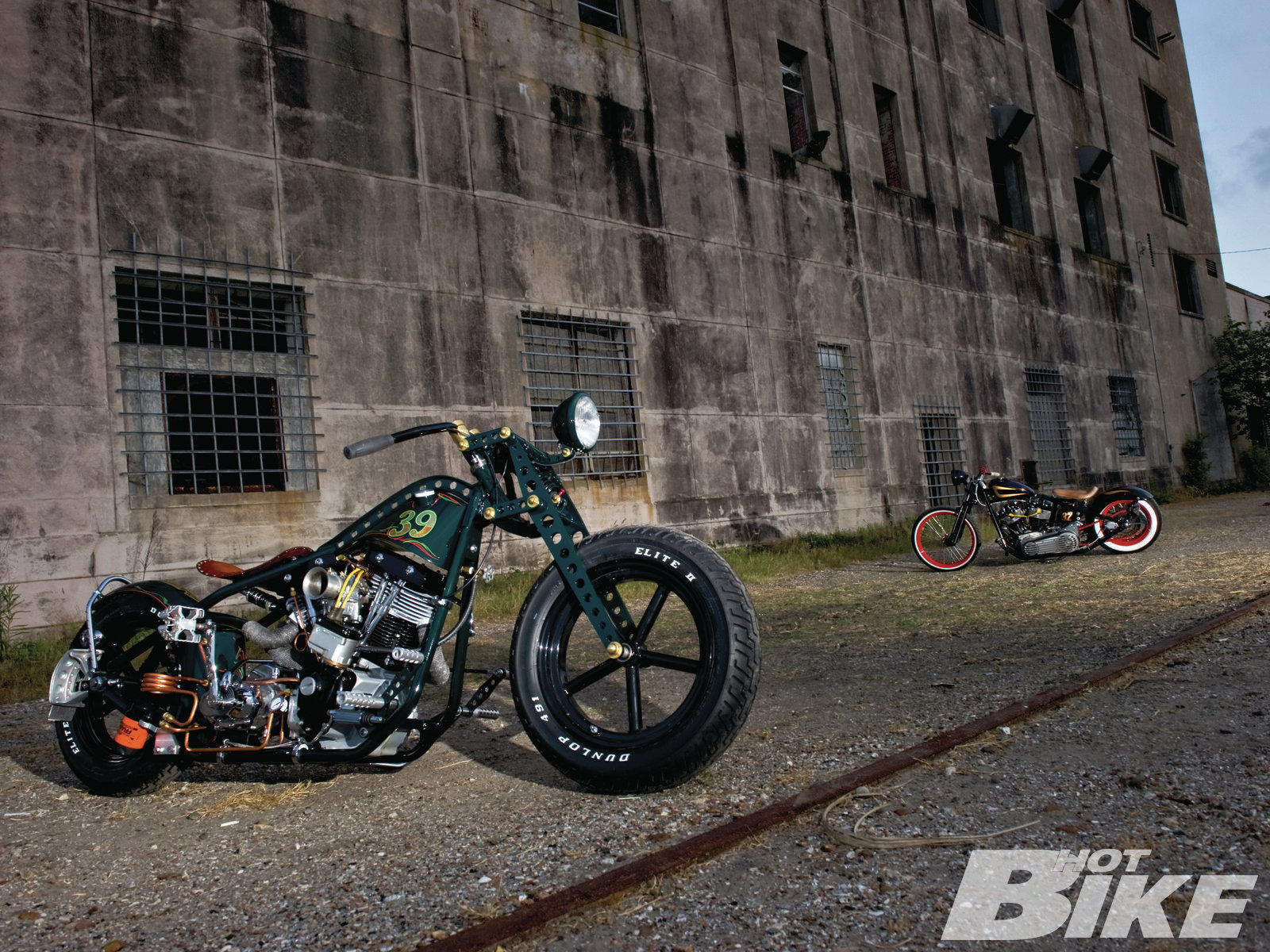 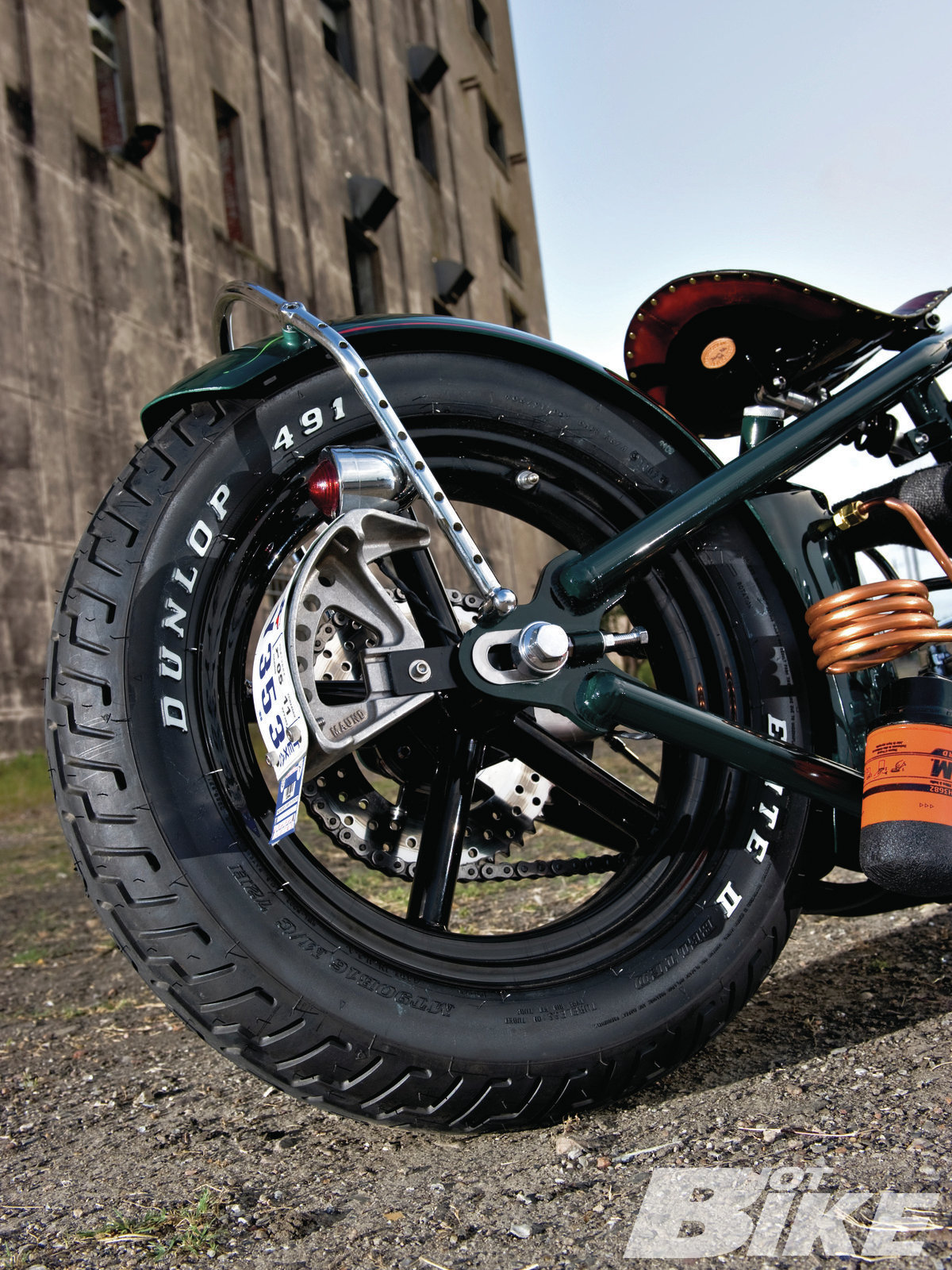 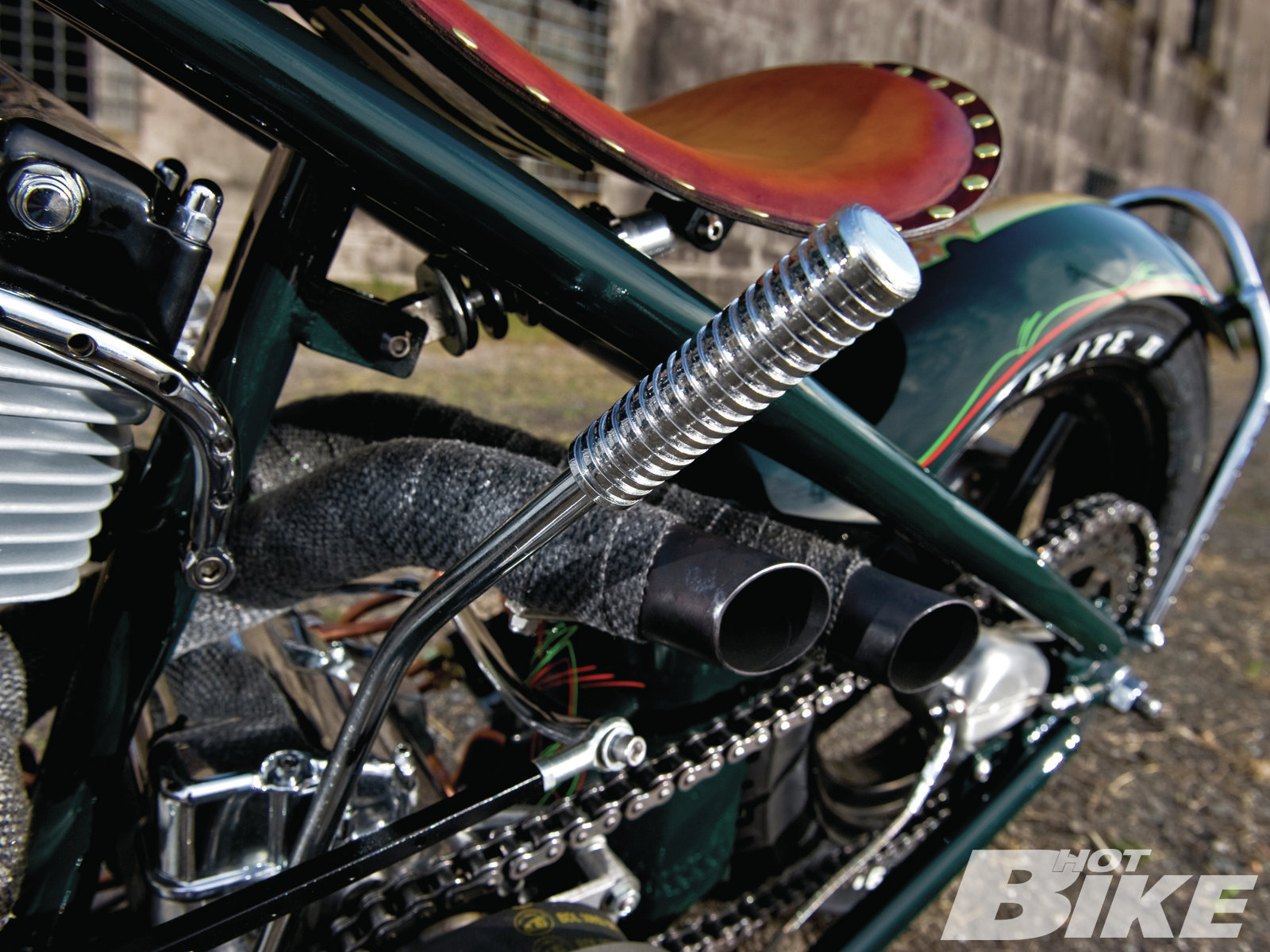 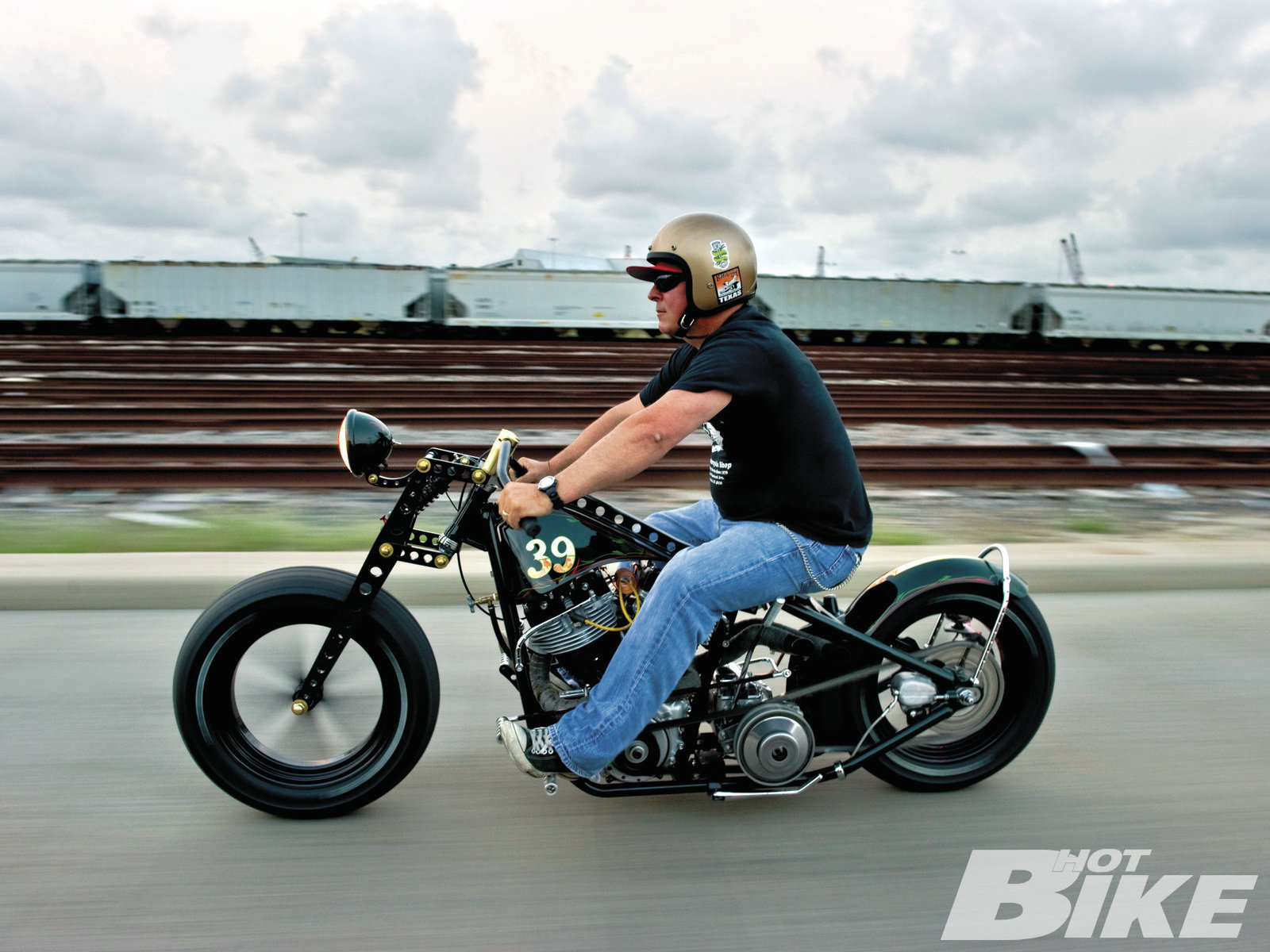 There are many aspects of a shop that make it successful, but there’s only one that trumps the rest: performing a service better than the competition. Primer Inc. of Pasadena, Texas, is one of those shops that seems to achieve that number-one trait effortlessly—and with a unique style. Started in 2006 by Pat Kahanek and Jason Barron, “Primer Inc. Customs is dedicated to building unique custom bikes that do not follow any specific trend—we blend vintage looks with modern technology,” Jason says. They prove Jason’s words with every bike they build—this bike for example; it’s their version of a boardtrack racer, but that’s not exactly how it started.

Like so many radical custom bike builds, Jason and Pat started off building the bike for Pat to ride himself. They started by obtaining a rigid Kraftech frame on eBay. “We got the frame; put it on the bench, and just started cutting off anything not needed to ride it. Less is more to us,” Jason says. Subtracting the unnecessary is customizing, but not custom. They really started to get creative with the bike when they incorporated a 1931 Ford I-Beam front axle into the frame’s backbone. They continued the styling cues of the backbone into the custom girder front end built 2 inches under stock length. A pair of ’70s-inspired 16-inch Invader five-spoke wheels were attached to either end of the chassis with a spool-style hub for the front wheel (meaning there’s no provision for any type of rotor or brake drum), and a Flyrite Rocket sprotor attached to the rear.

A modern Twin Cam is good-looking and reliable, but it is hardly considered one of the most aesthetically pleasing and isn’t known as a “technical” looking engine—Jason and Pat decided that a Shovelhead would better fit in with the bike’s general theme. Osborn’s Cycles (a local motor builder) built them a stock 1976 74ci beauty, and they slipped it into the modified Kraftech in front of a RevTech five in a four-speed kicker transmission. They installed a velocity stack that barely covers the intake side of an S&S carburetor and added a Morris magneto that provides the spark to ignite the fuel atomized by the carb.

With the mantra, “less is more” echoing in the back of their heads, they knew the bike wasn’t going to require much in the way of sheetmetal. “I guess the most challenging part was the I-beam backbone. Getting the right angle to give enough room for the tank and still look good was hard. The gas tank was a breeze, though,” Jason says. The rear fender looks like it might have been slightly more challenging—it incorporates the oil bag into its leading edge. “Most people look at this bike for a few minutes, squat next to it with a puzzled look on their face, then suddenly a big smile comes over them and you hear them say, ‘There’s the oil tank,’” Jason says. When looking at OEM bikes throughout the last 100 years, that’s not exactly traditional oil-bag placement.

I guess the most challenging part was the I-beam backbone. Getting the right angle to give enough room for the tank and still look good was hard.

The pair didn’t stop hand-making parts once the sheetmetal was finished. Every oil line was hand-bent with copper tubing—and there may seem to be an excess of it, but the added loops are very functional. The stacked coils above the remote oil filter act as an oil-cooler, and the loops that seem superfluous when a straight tube looks like it might have worked, exist as a kind of suspension between parts—every 45-degree V-twin rider knows that they vibrate quite a bit—and those loops prevent the lines from breaking or leaking. Tying the lightened look of the bike together (and actually subtracting a significant amount of weight from it) holes were drilled in just about everything and parts were found that already had holes drilled in them.

A fancy paintjob would only take away from all the custom work they’d done, so they decided on a scheme that would be less distracting. An understated basecoat was applied to the bike with subtle pinstriping—the only real flair was the variegated gold leaf number 39 on the gas tank and flourish on the rear fender. Complementing the gold touches of the gold leaf, brass fasteners were used wherever possible, further adding to the delicious blend of metal finishes that included polished, cast, machined aluminum, chrome, stainless steel, and copper.

Designed to be ridden from the start, the bike continues to see road time to this very day. The inherent low center of gravity created by the smaller wheels and under-stock frontend coupled with the bike’s light weight could only make for an exciting ride. Don’t be surprised if you see Pat slamming this bike through the gears on the local highways near Pasadena, then lined up at the bike show in the next major rally!