Headlines and Highlights of the time 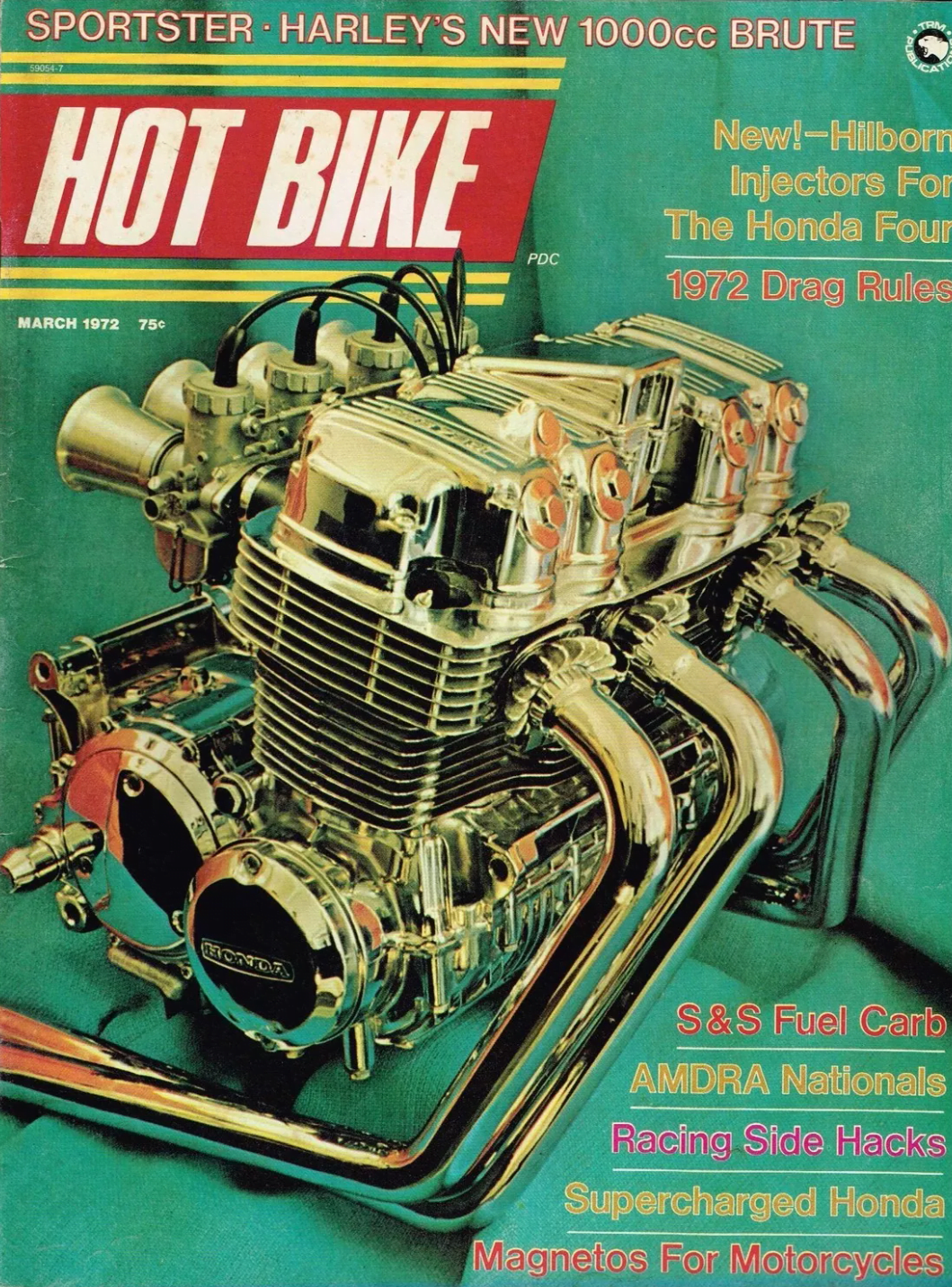 Back when Hot Bike ran bikes both foreign and domestic.

Yep, there was once a time when Hot Bike featured iron from the major European and Japanese motorcycle manufacturers too. We’re first and foremost a custom bike mag and since there’s a much larger aftermarket for Harley-Davidson cruisers, well, you see why we’ve gone to American manufacturers-only over the years. Our March 72 issue featured a Honda Four mill on the cover with a major emphasis on tech and drag racing inside. Here’s what else was going on that month:

March 2–Pioneer 10 was launched from the Cape Kennedy at 8:49 p.m.[3] Bearing a 6-by-9-inch gold anodized plaque that contained a message for alien civilizations, the American satellite attained a record speed of more than 30,000 m.p.h. on its way to the planet Jupiter, which it would reach on December 3, 1973. Pioneer 10 became, on June 13, 1983, the first man-made object to depart the solar system, moving toward the star Aldebaran. The last transmissions from Pioneer 10 were received on March 31, 1997, and the last signal was received on January 22, 2003.

March 7–TWA Flight 7 was half an hour into its flight from New York to Los Angeles when the airline’s officials were notified that it had a time bomb on board. The plane landed back at JFK at 12:10 pm. A trained German shepherd named “Brandy” sniffed out the explosive, found in an attache case in the cockpit. With five pounds of C4, the device would have destroyed the Boeing 707, with 52 on board, in midflight at 1:00 pm. Police defused the explosive with 12 minutes to spare.

March 8–As the extortion plot against Trans World Airlines continued, a C4 packed time bomb was found on a second Boeing 707. Hidden in a bathroom, the bomb exploded at 3:55 a.m. while the jet sat, unoccupied, at the airport in Las Vegas. Two searches had failed to detect the explosive. The plane had arrived seven hours earlier from New York. The plotters had warned TWA about bombs on four separate flights, and had demanded a $2,000,000 ransom.

March 10–Broadcaster Larry King was cleared of charges of grand larceny that had been brought by a former business partner. His arrest in December 1971 nearly ruined his career, and King would work at various radio jobs before getting a nationally syndicated talk show in 1978. In 1985, he would launch Larry King Live on CNN.

March 15–The Godfather, directed by Francis Ford Coppola, debuted in five theaters in New York City, and would set a record (which stood until 1975) for the highest-grossing film in history, taking in $87,500,000 in its first release.

March 21–The United States Supreme Court struck down, as unconstitutional, a Tennessee law requiring one year’s residency in the state before a person could register to vote. For the 6–1 majority ruling, Thurgood Marshall wrote “30 days appears to be an ample period of time for the State to complete whatever administrative tasks are necessary to prevent fraud – and a year, or three months, too much”. At the time, all but a few states required at least six months’ residency. The ruling, made in Dunn v. Blumstein (405 U.S. 330) effectively opened the way for as many as 5.5 million people to become eligible to register.

March 22–The proposed Equal Rights Amendment was approved by the United States Senate, 84–8, after passing the House on October 12, 354–23, and sent to the states to consider ratification. Although 35 states ratified the amendment by the original 1979 deadline (later extended to 1982), the ERA fell short of the necessary approval by at least 38 states.

March 30–North Vietnam launched the Nguyen Hue Offensive (referred to in the United States as the Easter Offensive), with 30,000 troops and 200 armored vehicles invading South Vietnam, with the objective of capturing the Quang Tri province. With American air support, the South Vietnamese army drove out the invaders. By the time the offensive ended in October, more than 40,000 soldiers from the North, and 10,000 from the South, had been killed.

March 31–A team of investigators from the Flamingo Park Zoo in Scarborough found a mysterious carcass floating in Scotland’s Loch Ness, while searching for proof of the existence of the legendary Loch Ness Monster, and loaded it into their truck. They were stopped by Fife police under a 1933 law prohibiting the removal of “unidentified creatures” from the Loch, and the incident made headlines worldwide.[65] An examination determined that the body was that of an elephant seal, which had died the week before at Flamingo Park. John Shields, a Zoo employee, had intended only to play a joke on his colleagues, and hadn’t counted on police or press attention.