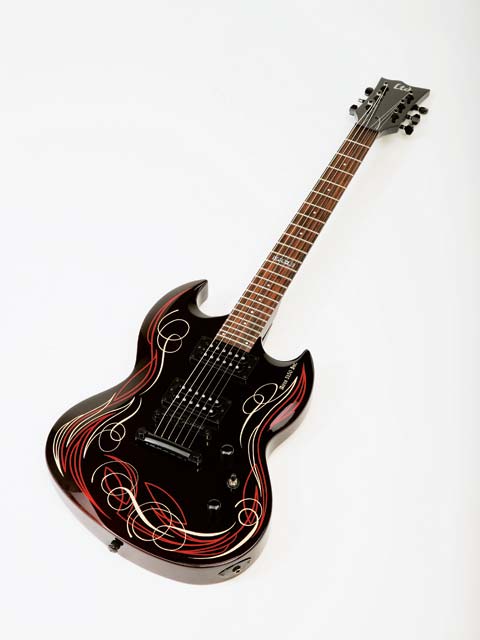 Hot Bike and ESP benefit for Rupert’s KidsHOT BIKE magazine teamed up with ESP Guitars to produce hand-painted custom guitars that were raffled off during the ’06 Sturgis Rally. Each of the guitars was custom-painted by motorcycle industry heavyweight Airea 5150 or long-time motorcycle painter Marshall Canafax.

These guitars were not just created to be played and admired, but also to benefit disadvantaged young adults. The Rupert’s Kids program was designed to teach valuable job skills and instill a sense of confidence and self-worth, ultimately leading each of the members of Rupert’s Kids toward stable housing, employment, and relationships, which in turn will help them become independent contributing members of their communities. Indianapolis-based Rupert’s Kids serves youth, typically ages 18-24, who have received intensive services in nearly every social service system in the region. Through work programs such as landscaping and home renovation, members of Rupert’s Kids learn skills and values that will lead them toward stability in their lives.

Rupert Boneham is best known for his two seasons appearing on the reality series Survivor, competing on both Survivor: Pearl Islands and Survivor: All Stars. He quickly became the all-time favorite competitor on the series. After winning America’s Tribal Council, Boneham was awarded one million dollars, much of which he used to start his dream: Rupert’s Kids.

Following the Kid Rock concert at the Buffalo Chip campground, three of the custom guitars were auctioned off. Aside from the stunning wood and paintwork, the guitars were autographed by some of the many musicians that played during the Sturgis Rally. Included were Alice Cooper, Ted Nugent, Foreigner, the James Gang, Gretchen Wilson, Buck Cherry, Alice in Chains and Kid Rock himself. In total, the three ESP guitars netted $27,000 for Rupert’s Kids.

For more information on how you can help, log on to www.rupertskids.com. To see what Airea 5150 and Marshall can do for your ride, check out www.airea5150.com and www.mccustompaint.com (Marshall’s site). ESP guitars and the Buffalo Chip are at www.espguitars.com and www.buffalochip.com, respectively.