Riding this custom Harley Fat Boy until the wheels come off 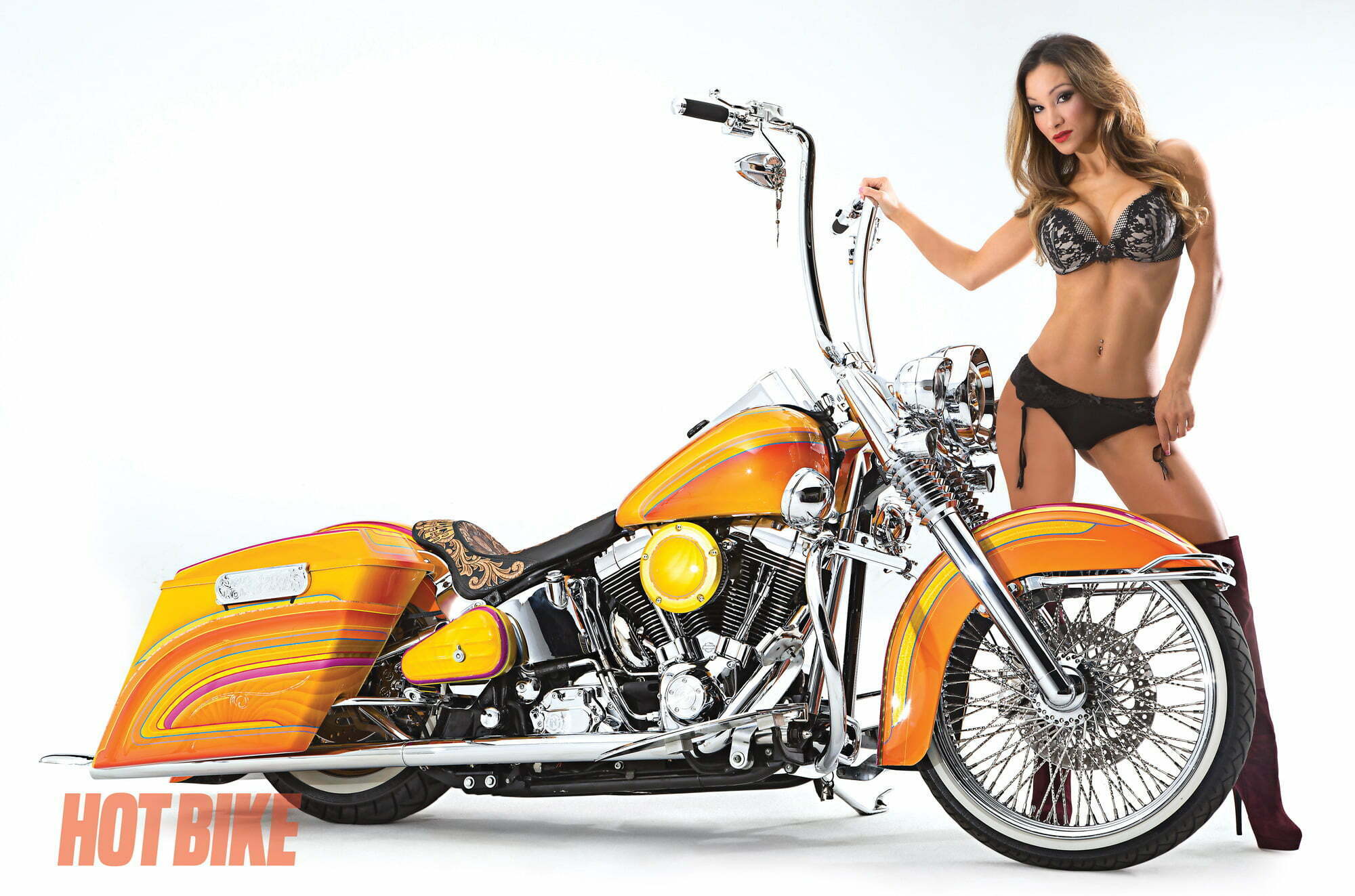 It all started back in 2009 when my dad and I went to the local Harley dealer to buy parts for his bike. On the way out we spotted a Pearl White 2004 Fat Boy. The bike had only 1,200 miles on it and was basically new. We began talking to the sales manager, and my dad already knew him, so we immediately started talking numbers. Next thing you know I was riding a custom Harley Fat Boy home. 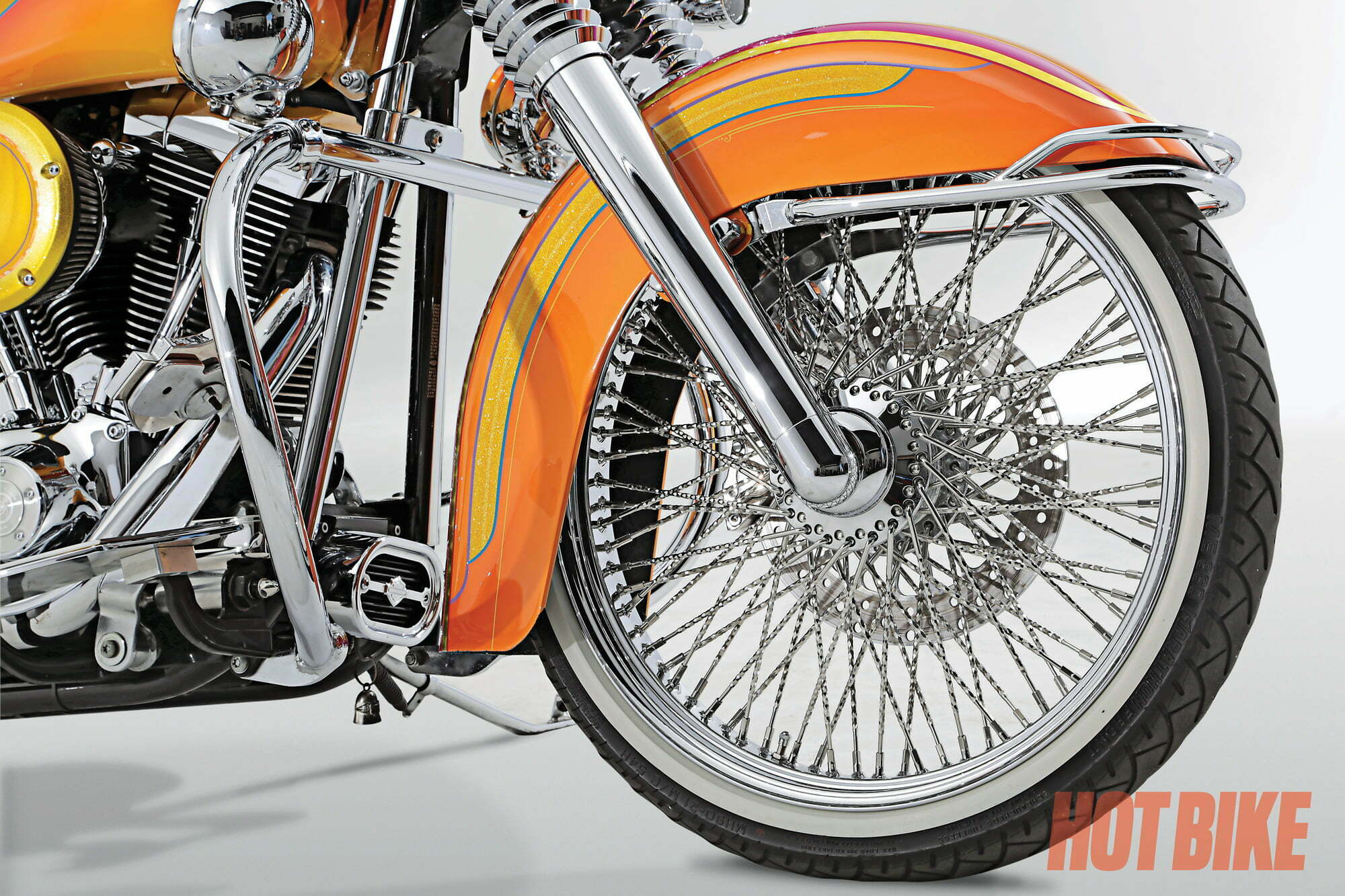 The whole way home I was making plans in my head to customize it, but I knew this wouldn’t happen overnight. I already knew I wanted to build a straight gangster-style Vicla with loud pipes and apes. I also knew it wouldn’t be easy either, so little by little I did things to it. I had some bad misfortunes along the way, including the back wheel coming off on the freeway and then getting rear-ended. 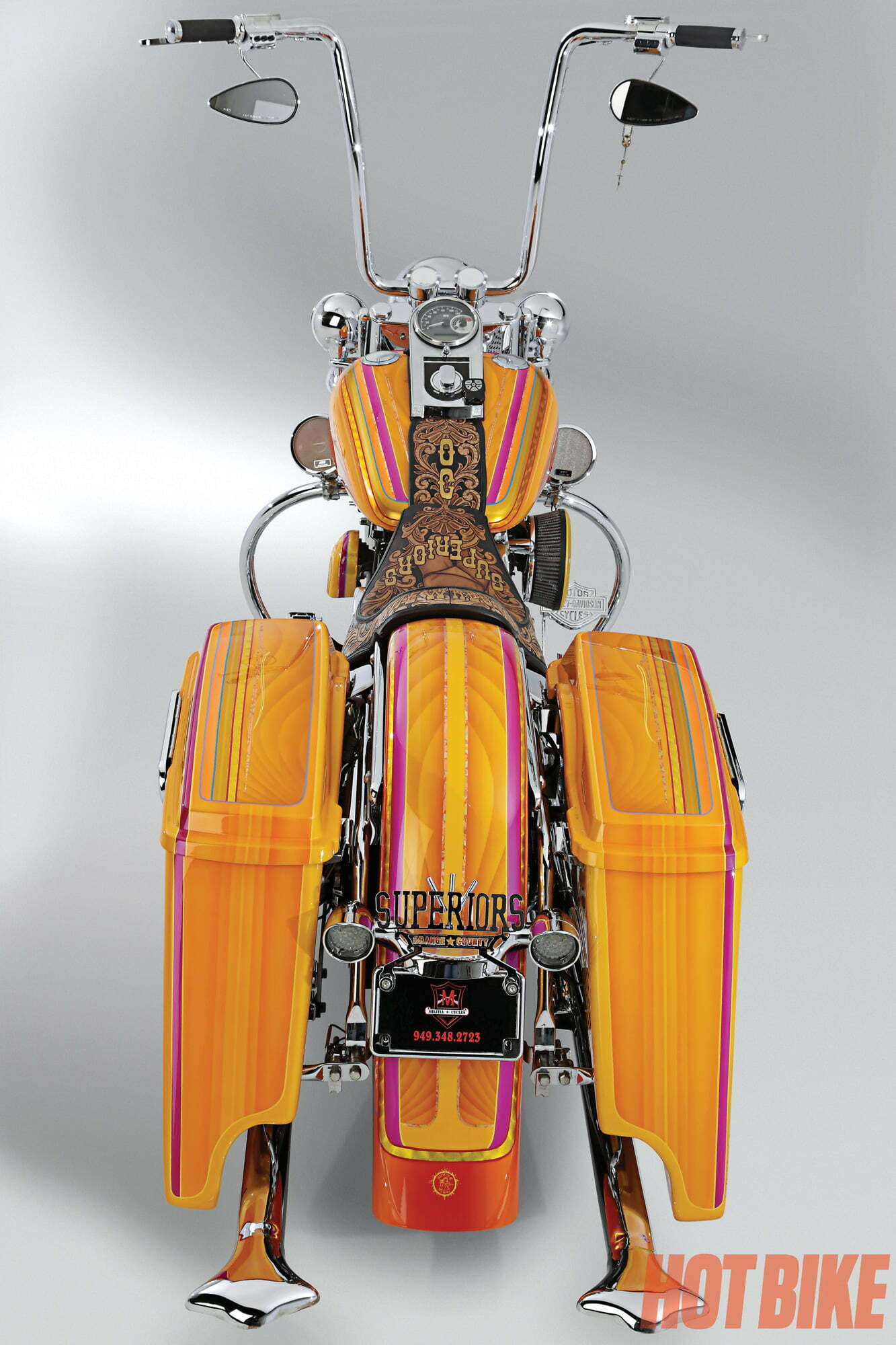 It was after that incident I decided to change the color, but before I got her painted I had my club president Jorge Maldonado stretch my rear fender, shave the taillight and seat holes, and add a badass stereo system. Although people tried to talk me out of painting it and I liked the Pearl White, it was just played out and wasn’t doing it for me. I looked around for painters, but I wasn’t really finding anybody out there who had any good ideas. In my head I knew I wanted an out-of-the-box paint job, and if I wanted to take it to the next level, I had to take it to the one and only Danny D. in order to achieve that. So one day I went to a car show and ran into my homie Jose Beltran, and I saw his beautiful badass drop-top ’65 Impala known as Love Street. We started talking, and I told him about wanting a Danny D. paint job, and he said he would take me to him. So one day we took a drive to his shop, and we talked to Danny about a possible paint job. He asked me flat out on a level from one to 10 what kind of paint job I wanted. I laughed and said a 15! I told him I want a paint job that once people look at my bike they won’t forget about it. I told him he was free to do whatever he wanted, but I did tell him no pink. 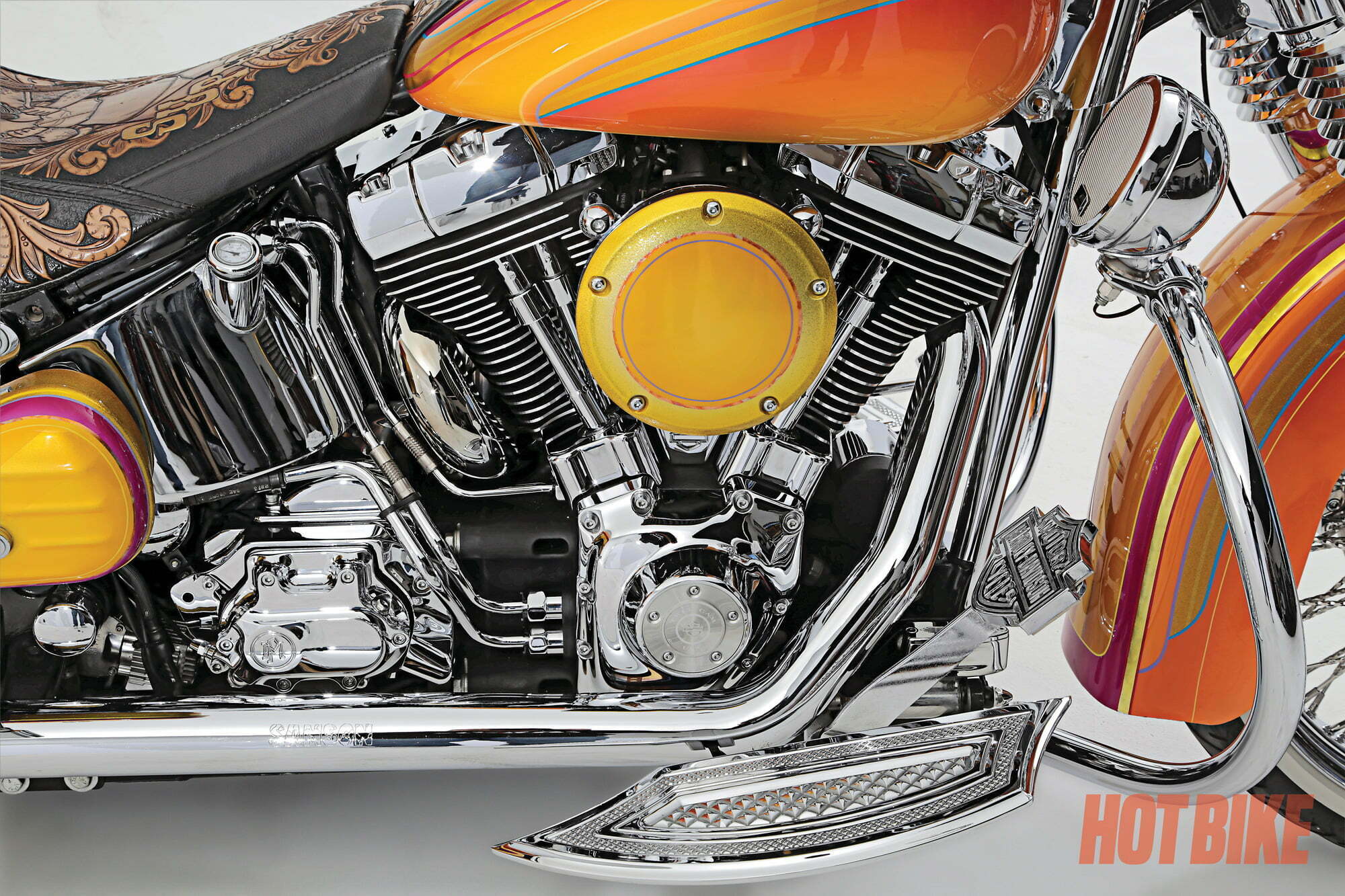 While the bike was at paint I had Pat at Militia Cycles do all wiring and throttle internally and added a hydraulic clutch. A few months went by, and the parts were ready to be picked up. All I can say is it was way more than I expected. I was like a little kid on Christmas morning! I couldn’t wait to put her together to take her to the Santa Barbara car show. That’s where my club brothers Jorge Maldonado, Jose Rodriguez, and I pulled an all-nighter to get her ready. I ended up taking home first place. When I finally got home I took her out for the first ride, and wouldn’t you know the bad luck continued. As I was coming down the freeway a truck in front of me ran over a two-by-four, and it flew back and hit my saddlebag and chipped the left bag. 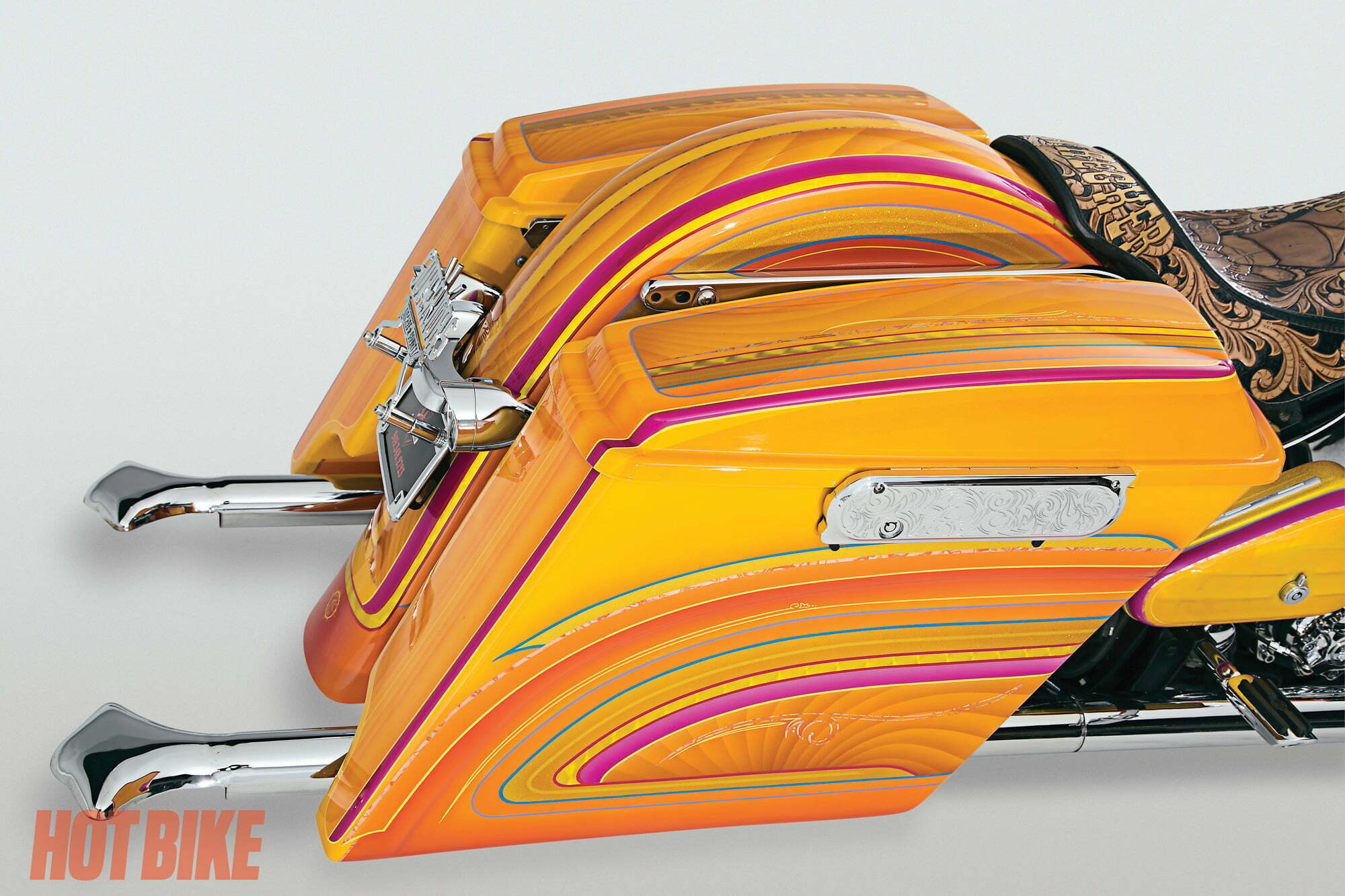 I called Danny D. to let him know what had happen and told him to add the pink—and still to this day I regret not letting him do it the first time. I must say the pink really makes it pop. I would like to give a special thanks to my dad, Leonel Gonzalez, for all the support and helping me get my first bike and getting me into bikes. My club brothers Jorge Maldonado and Jose Rodriguez for all the late nights and hard work throughout this adventure. Finally, Jose Beltran for introducing me to the one-and-only Danny D., Pat at Militia Cycles, and most importantly the man upstairs. 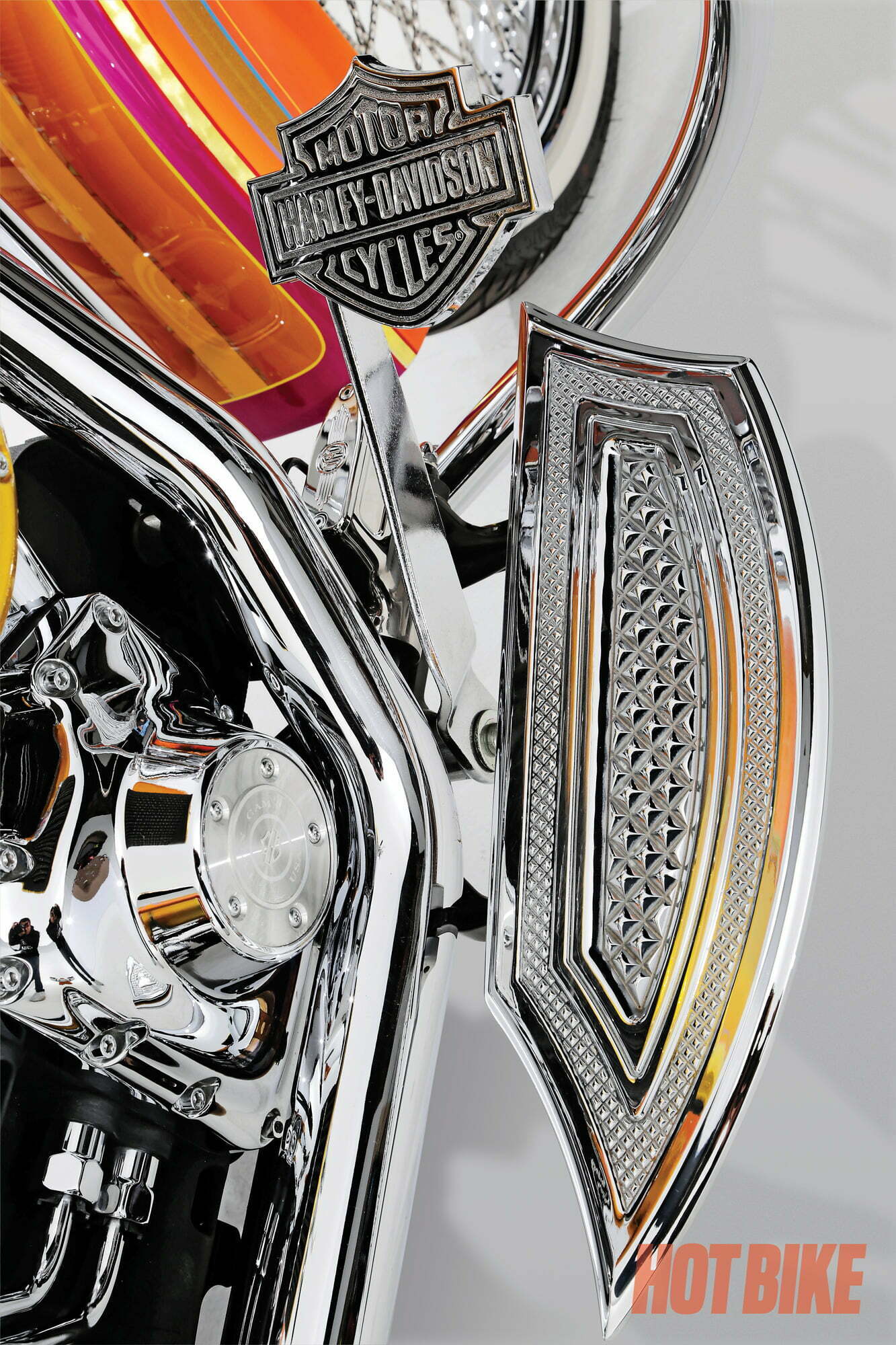 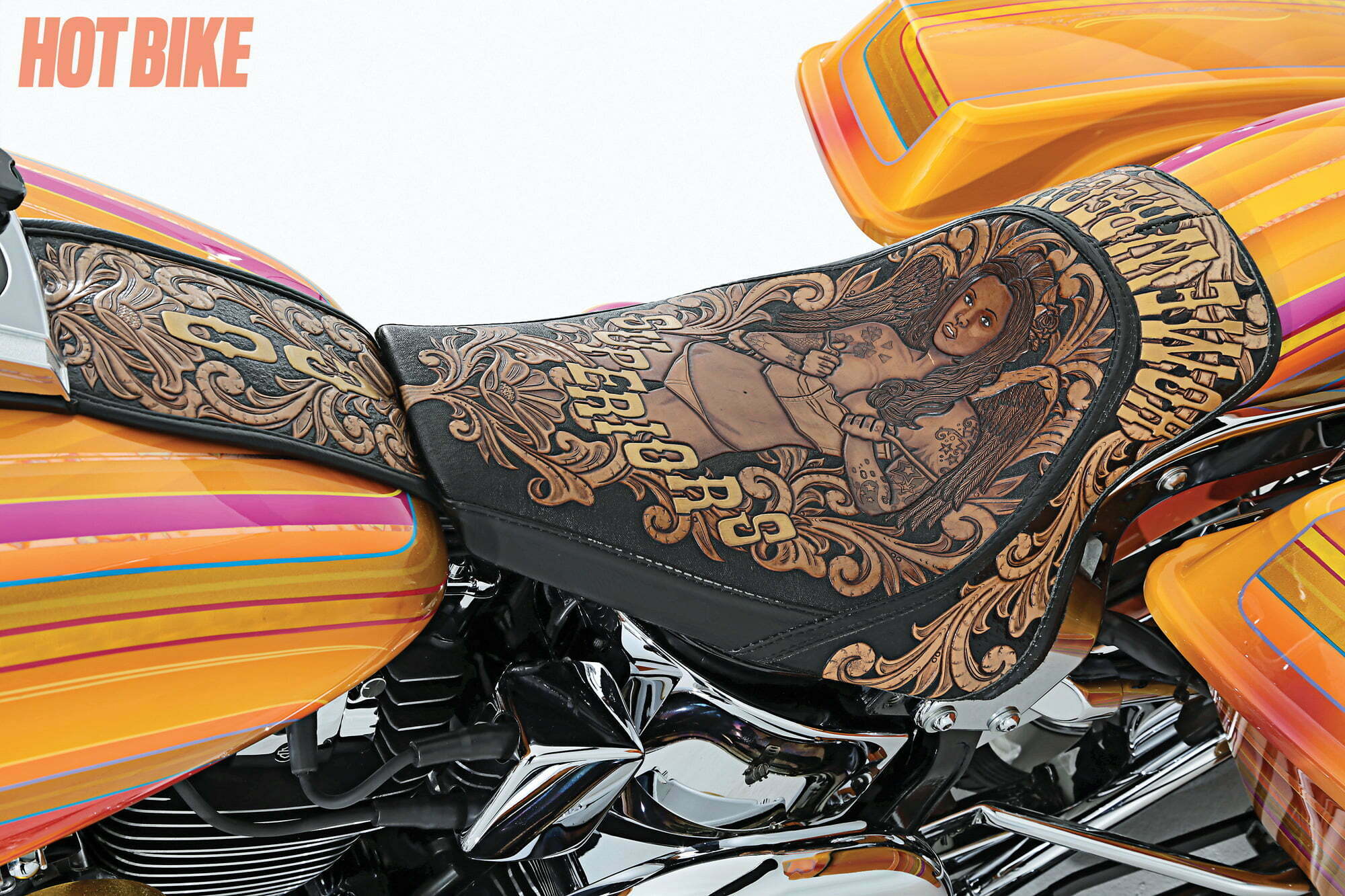 Seat by The Seat Guy 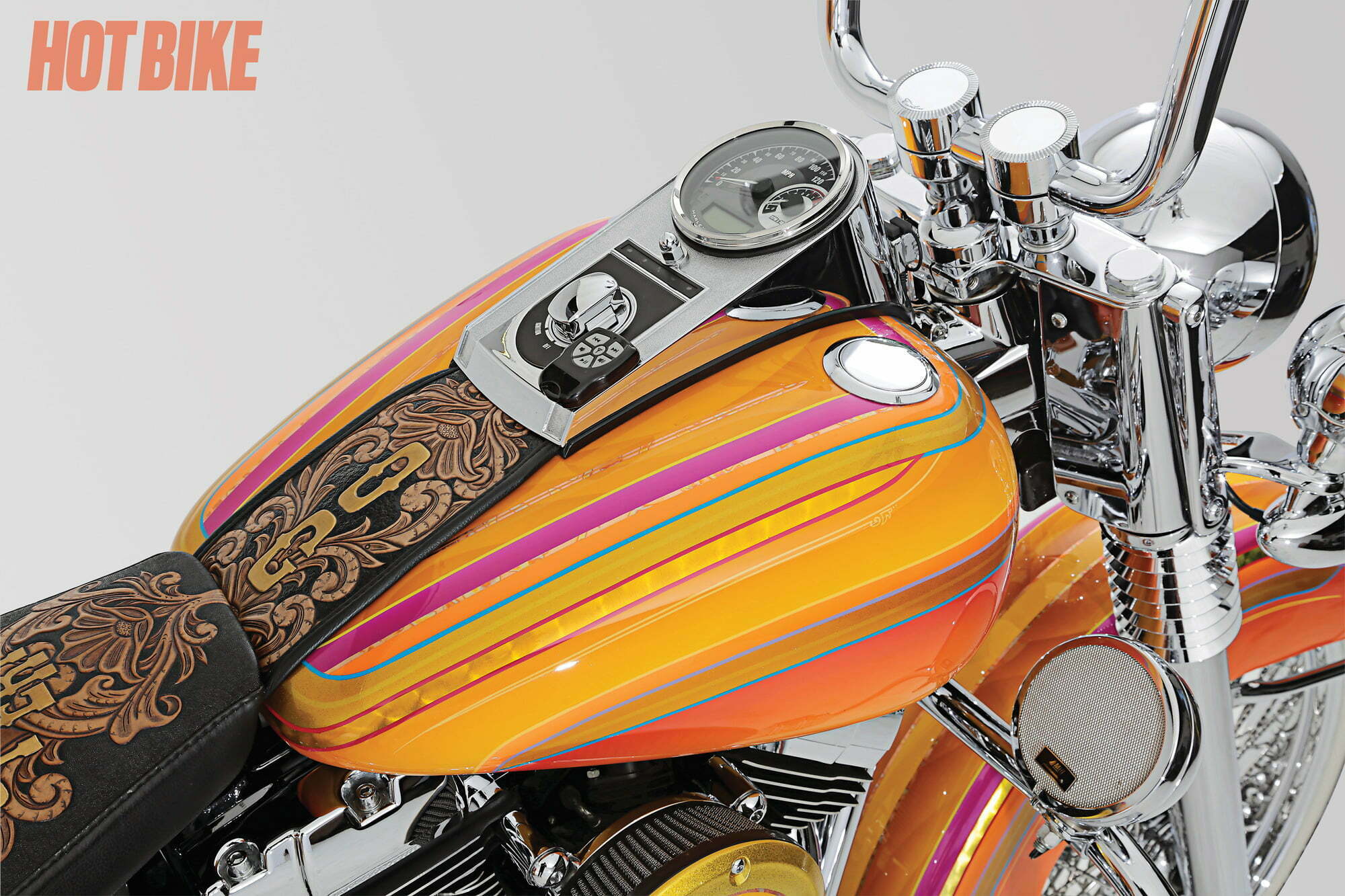 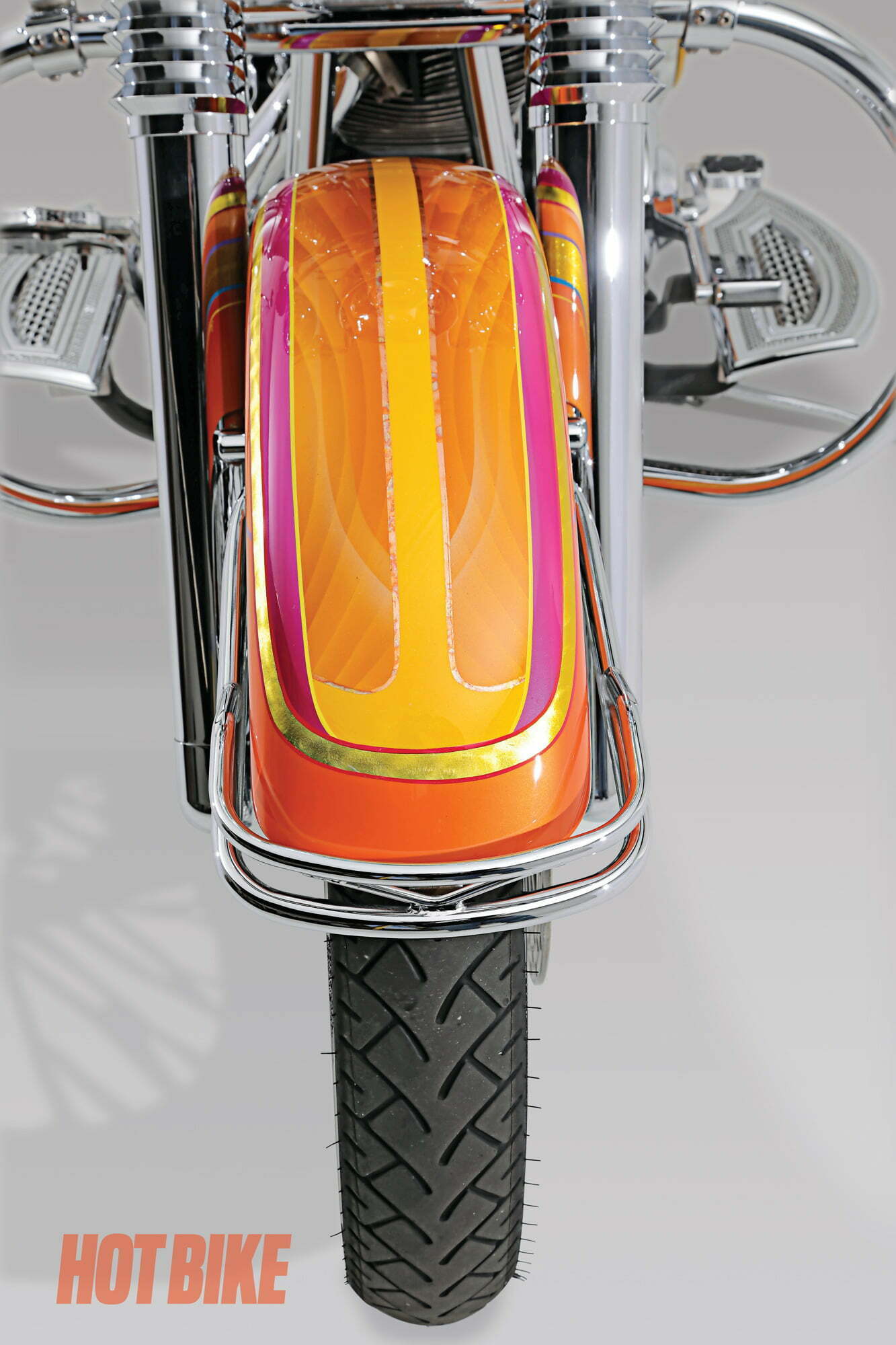 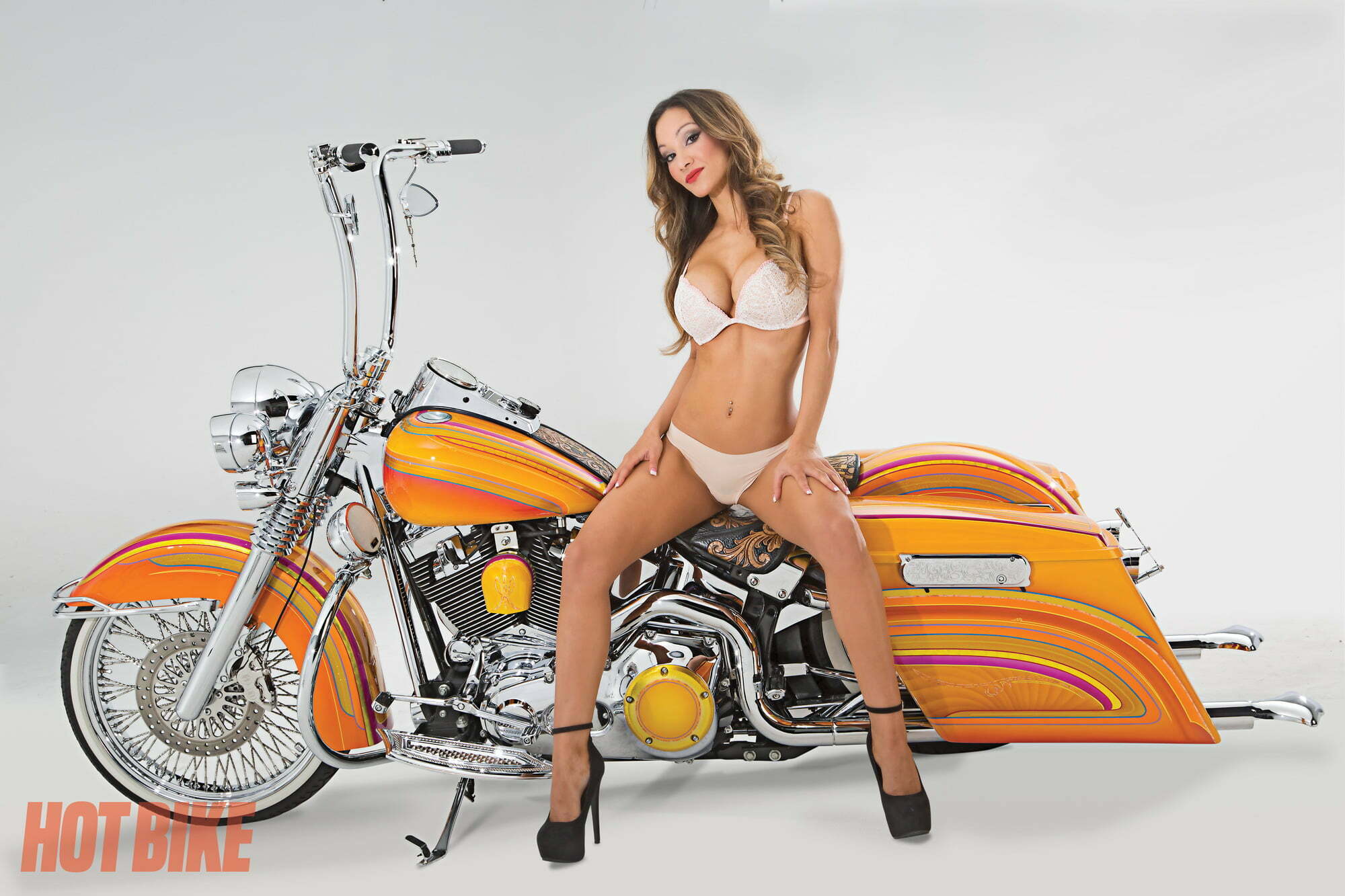 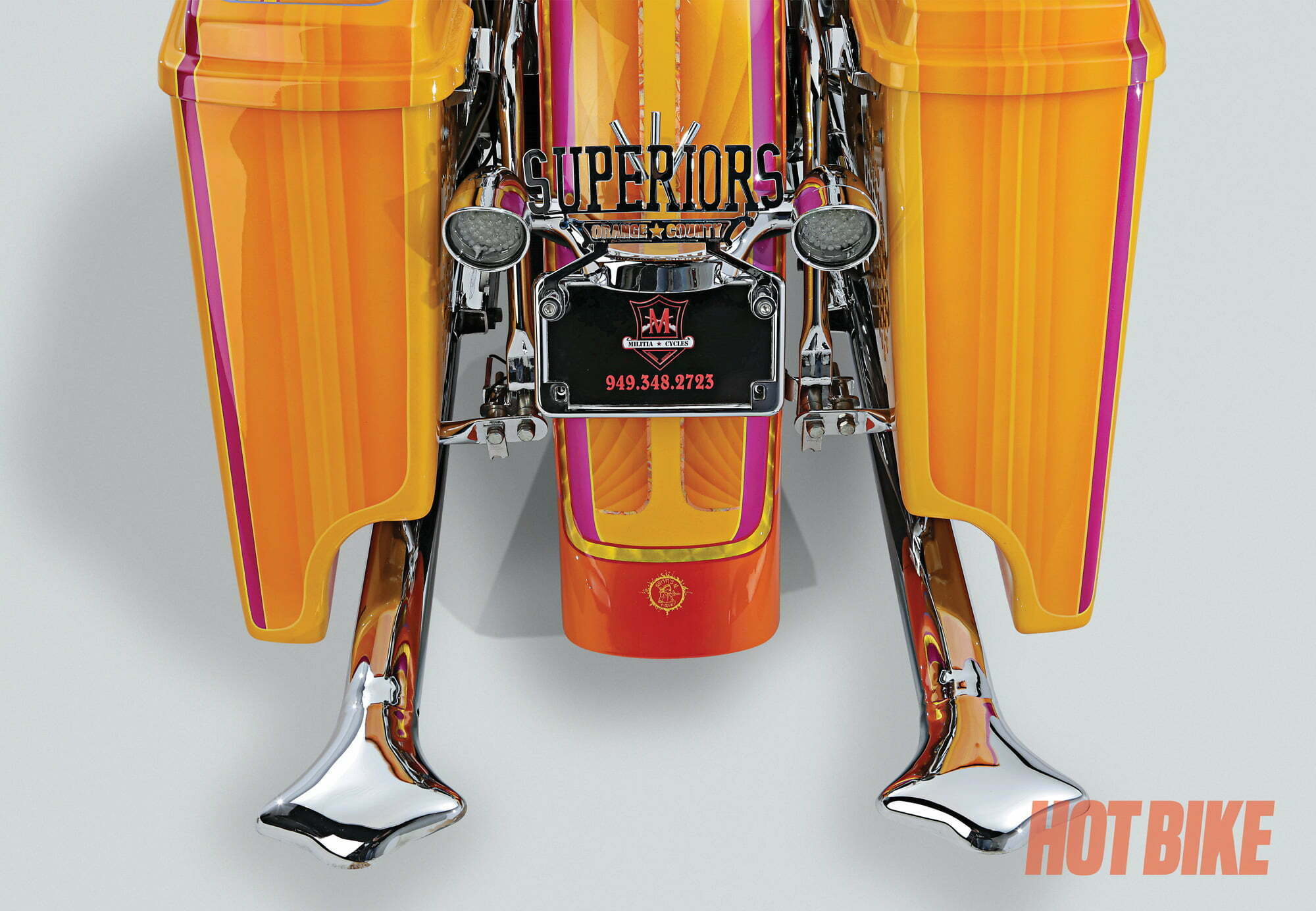