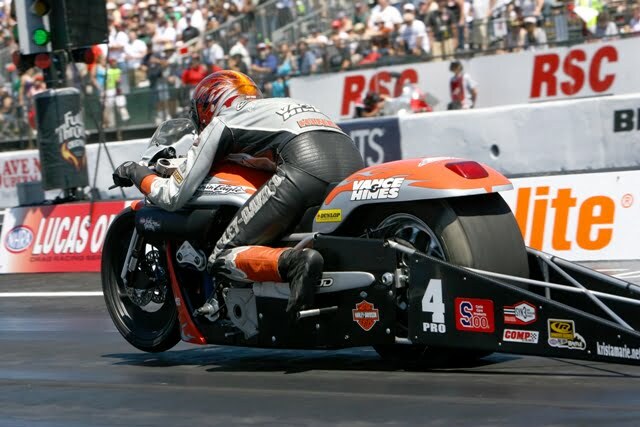 SONOMA, Calif. (July 26, 2009) – Screamin’ Eagle®/Vance & Hines rider Andrew Hines defeated his teammate, Screamin’ Eagle/Vance & Hines rider Eddie Krawiec, to win the final round of Pro Stock Motorcycle eliminations at the Fram Autolite NHRA® Nationals at Infineon Speedway. It was the third consecutive all-Harley® V-Rod® final round of the 2009 NHRA season, the second win of the season for Hines and the 17th of his career. Krawiec, the defending NHRA Pro Stock Motorcycle champion, made his seventh-consecutive final-round appearance at Sonoma, and now leads the Pro Stock Motorcycle standings by 70 points.
“I think right now Eddie and I are riding the best we ever have in the three years we’ve been together on the Screamin’ Eagle/Vance & Hines team,” said Hines. “We have both really been working on our reaction times, and we are both hungry when we come to the line. The Harley V-Rod is one bad machine, but we prove our point with our riding.”

Krawiec and Hines are also the first Pro Stock Motorcycle racers to qualify for the five-race 2009 Full Throttle Countdown to the Championship. Krawiec qualified following the Mopar Mile High Nationals on July 12, while Hines qualified during eliminations at Sonoma. Only the top 10 points earners in the class will take part in the Countdown playoffs, which begin at the North Carolina Nationals on Sept. 17-20.

For the first time this season, Krawiec led Pro Stock Motorcycle qualifying, posting a 6.915-second run in the final round on Saturday to claim the top spot. Hines qualified third with a 6.931-second ET.

Hines started his march through Sunday eliminations with a hot 6.90-second run to defeat Suzuki rider Katie Sullivan, and put up a 6.93 ET in round two after Hector Arana left the line early. Hines used a 6.929 run beat NitroFish.com Suzuki rider Matt Smith (6.999) to advance to the final round for the third event in row.

Krawiec got a free pass in round one with Stone Mountain/Granite Mountain Harley-Davidson/Buell rider Junior Pippin broke at the starting line. Krawiec made a 6.961 pass in round two to beat Rocklin Motorsports Buell rider Matt Guidera, and won in round three when Doug Horne left the line early on the Horne Racing Buell.

“Consistency and confidence are our big advantage right now,” said Krawiec. “When I go to the line, I’m not thinking about the rider in the other lane. It’s just me, my Harley V-Rod motorcycle, and my lane. If I do my job, I should get a win. And if I don’t win, it’s good to see Andrew in the other lane.”

The final at Sonoma was the 12th time Hines and Krawiec had faced each other at the starting line, each winning six times. Hines had won twice in three final-round matches between the two riders, and he made it three-and-one with an outstanding 0.007-second reaction time and a 6.972 ET to beat Krawiec (0.034/7.014) going away.

After nine events on the 17-race 2009 NHRA Full Throttle Pro Stock Motorcycle schedule, Krawiec leads the series with 837 points. Hines is second with 767, followed by Smith with 636, and Horne with 580.

The next event on the 2009 NHRA Pro Stock Motorcycle schedule is the Lucas Oils NHRA Nationals, Aug. 13-16 at Brainerd International Raceway, Brainerd, Minn.