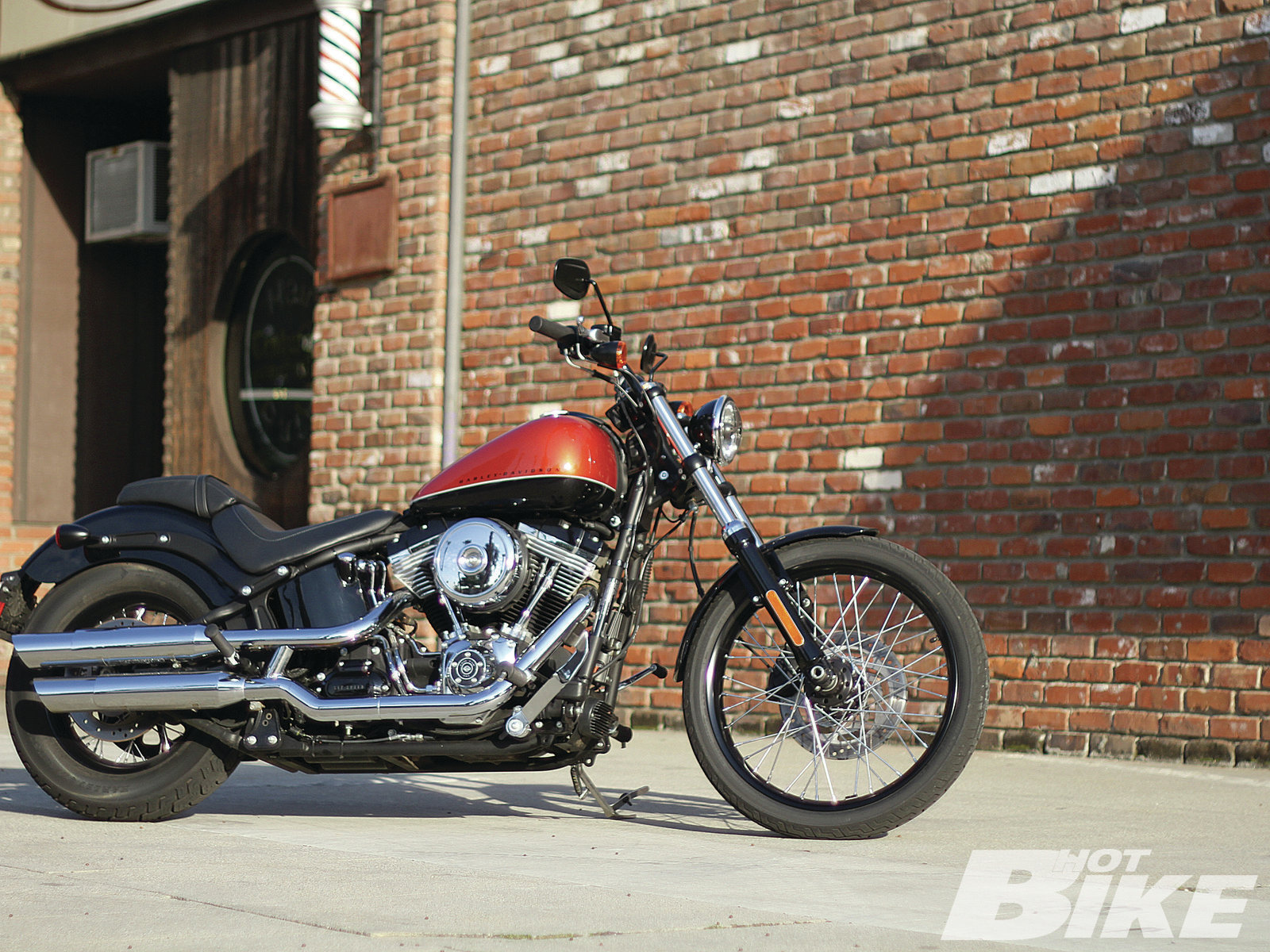 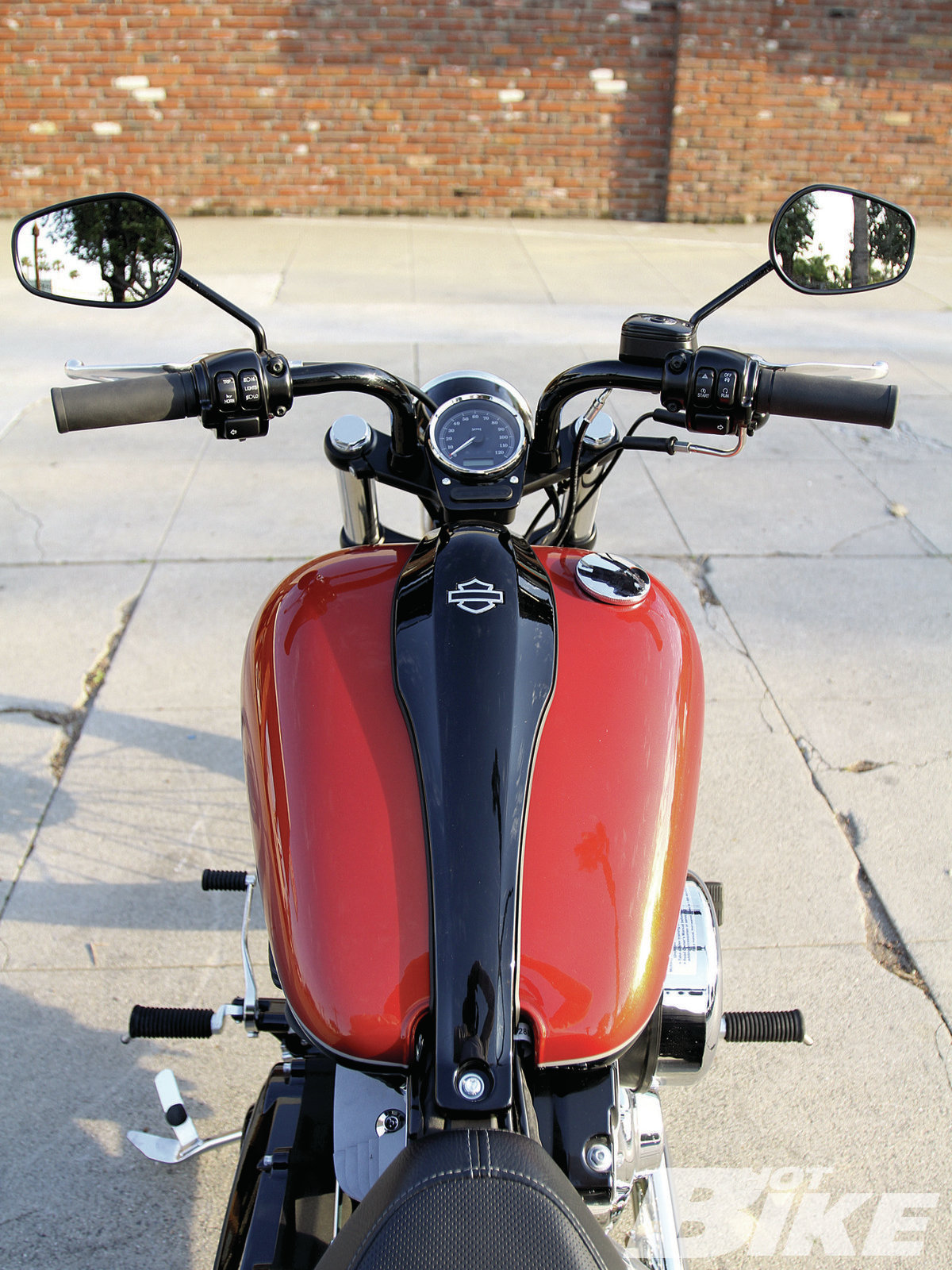 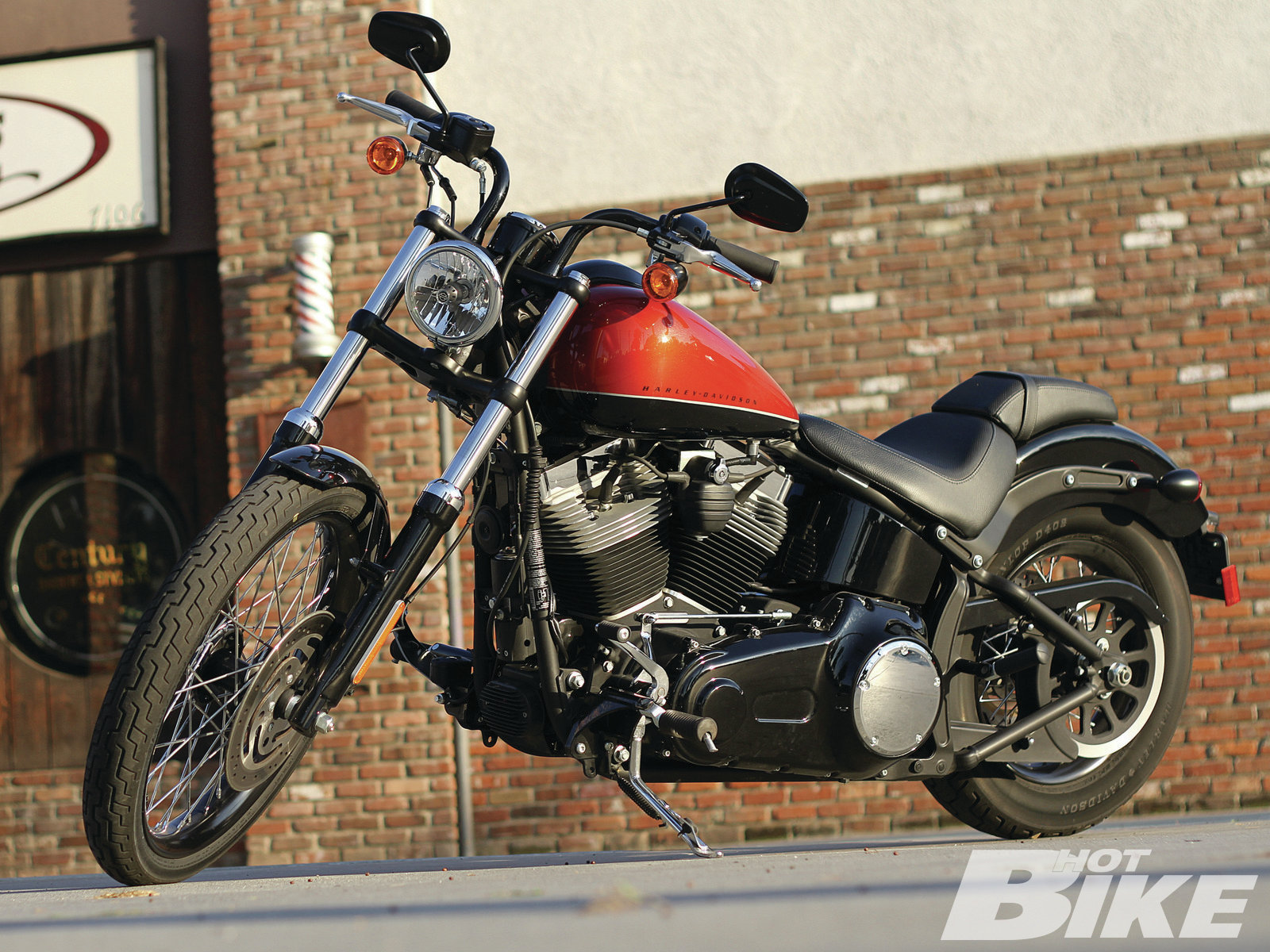 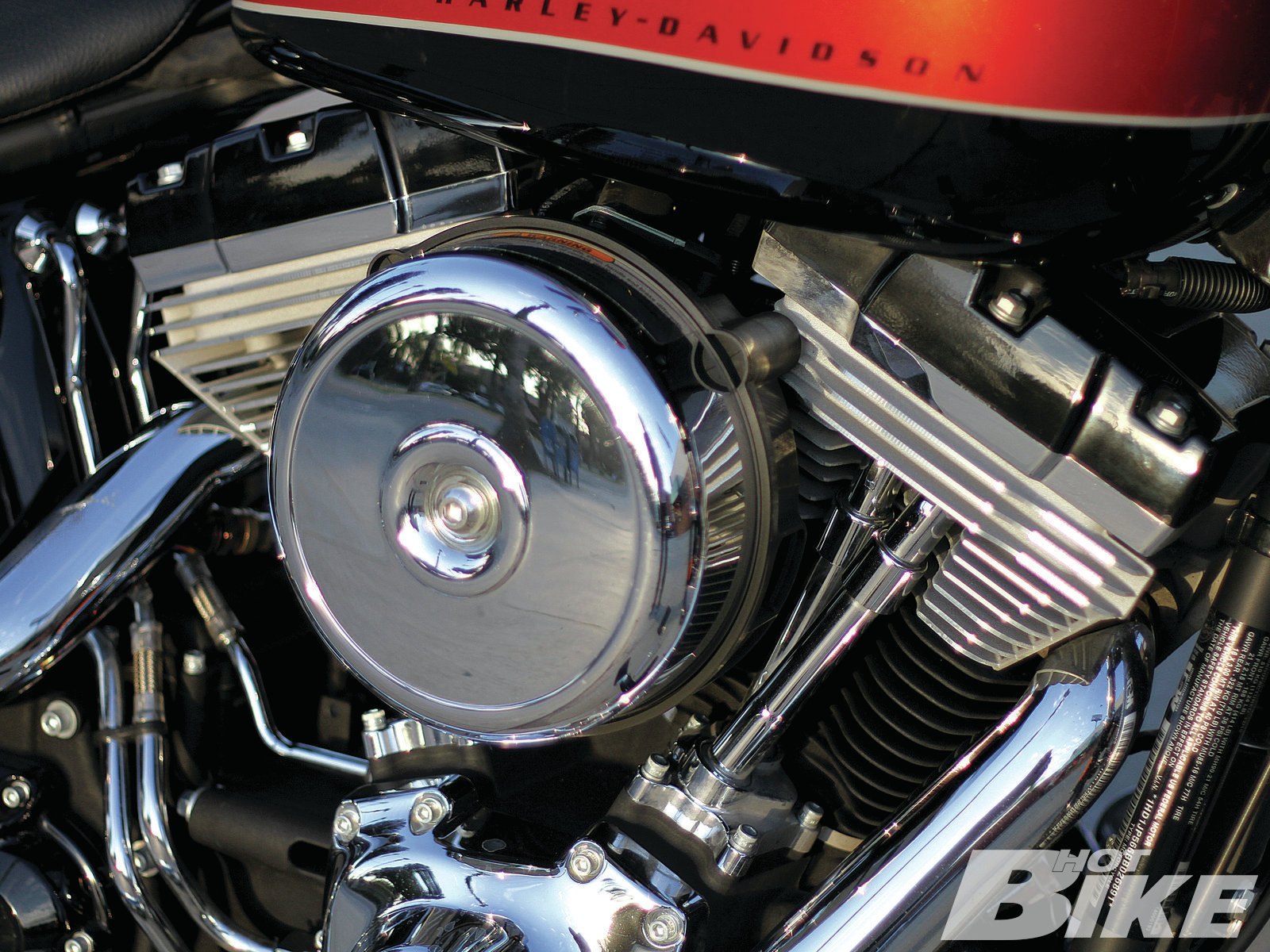 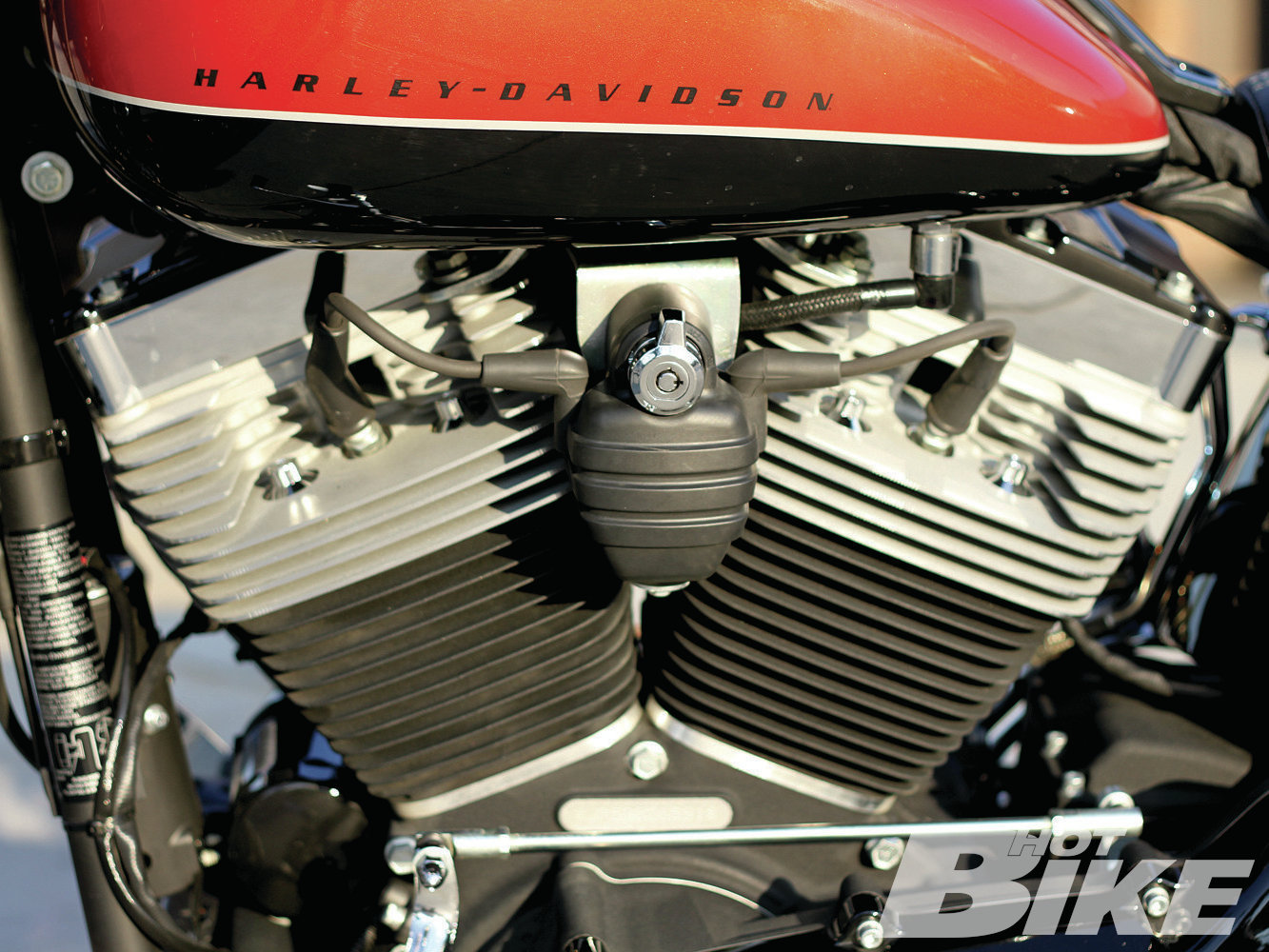 The two-tone cylinders and heads provide that old-school aesthetic with a modern twist by way of the grenade style ignition. 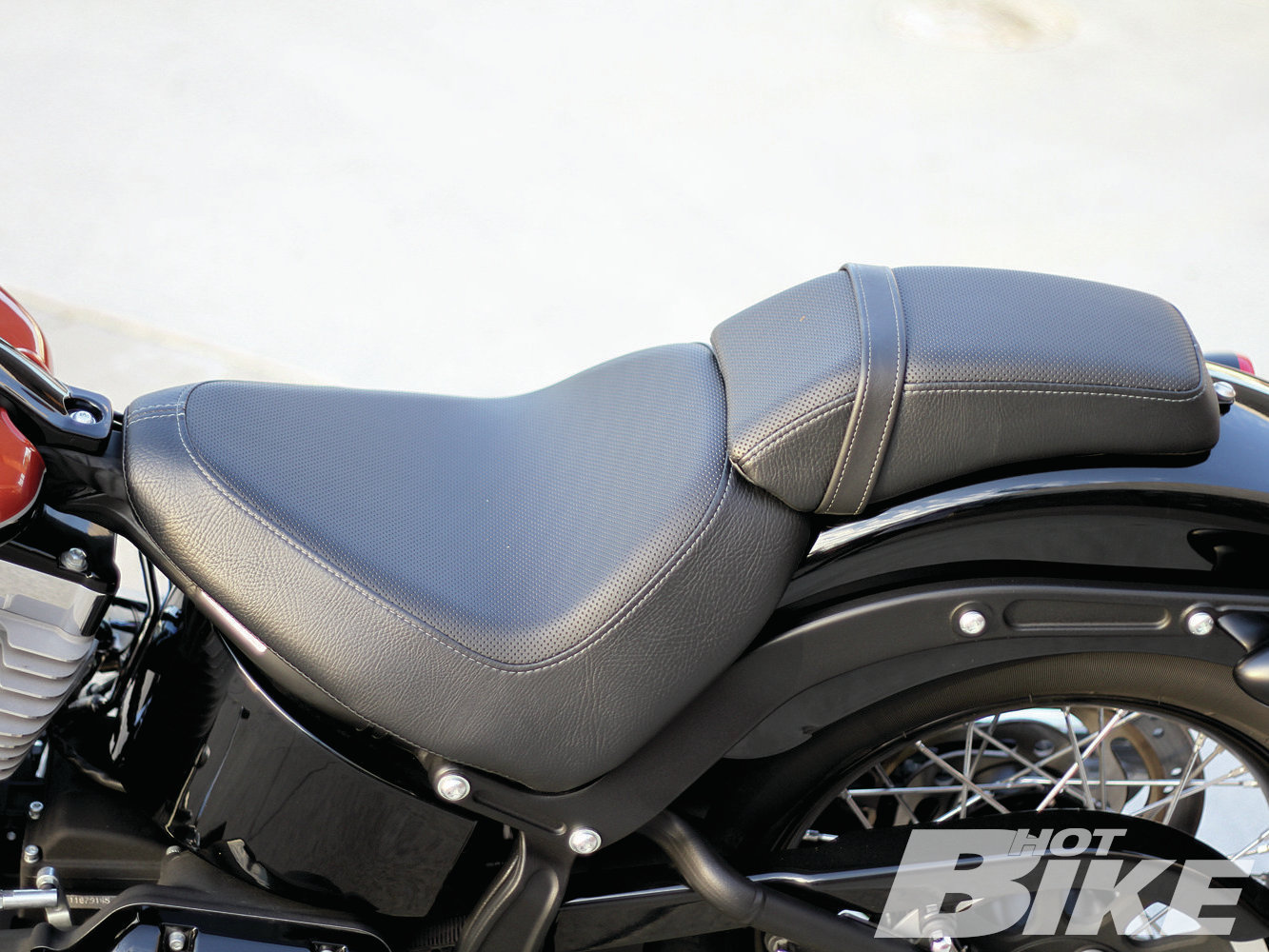 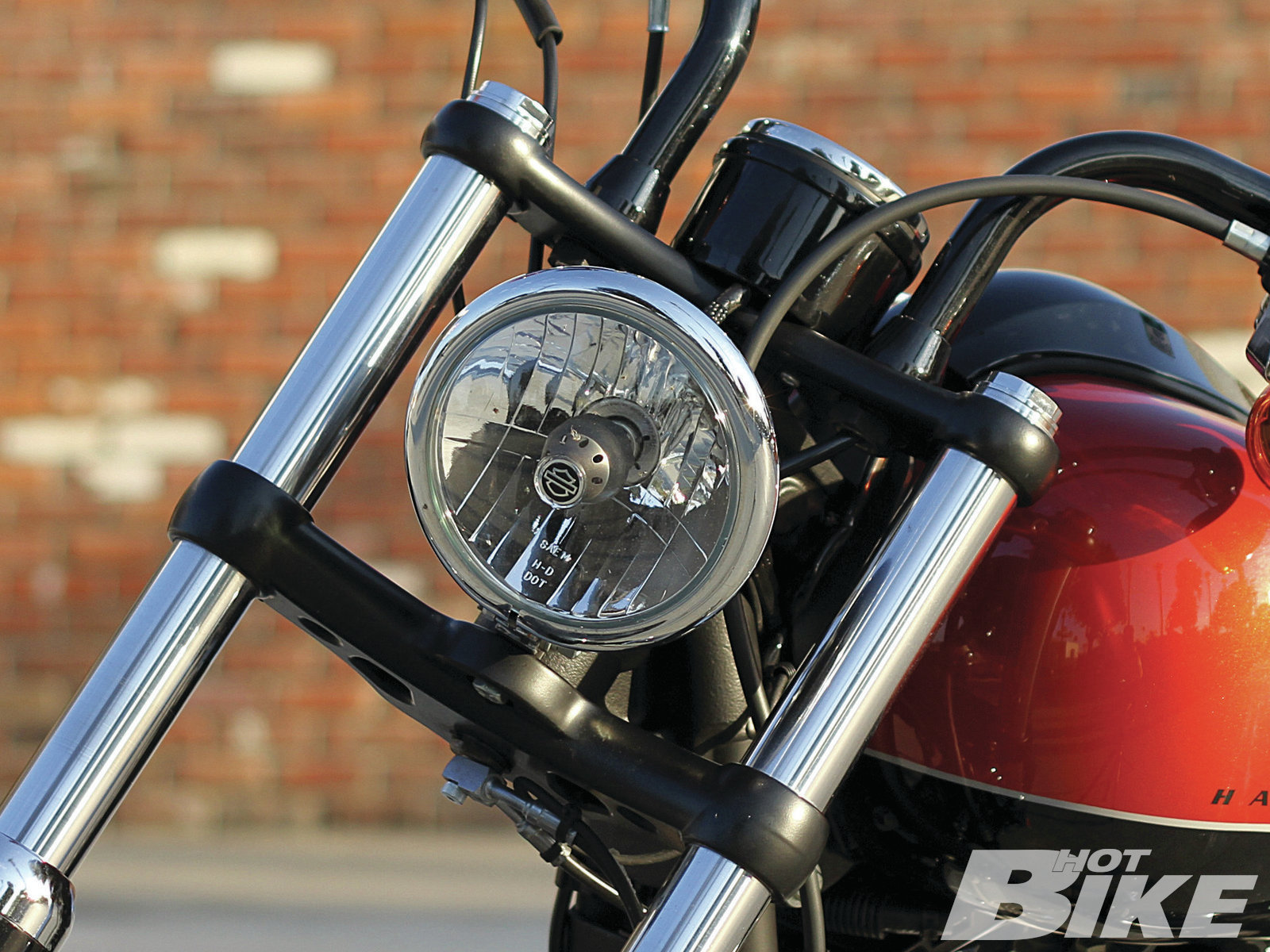 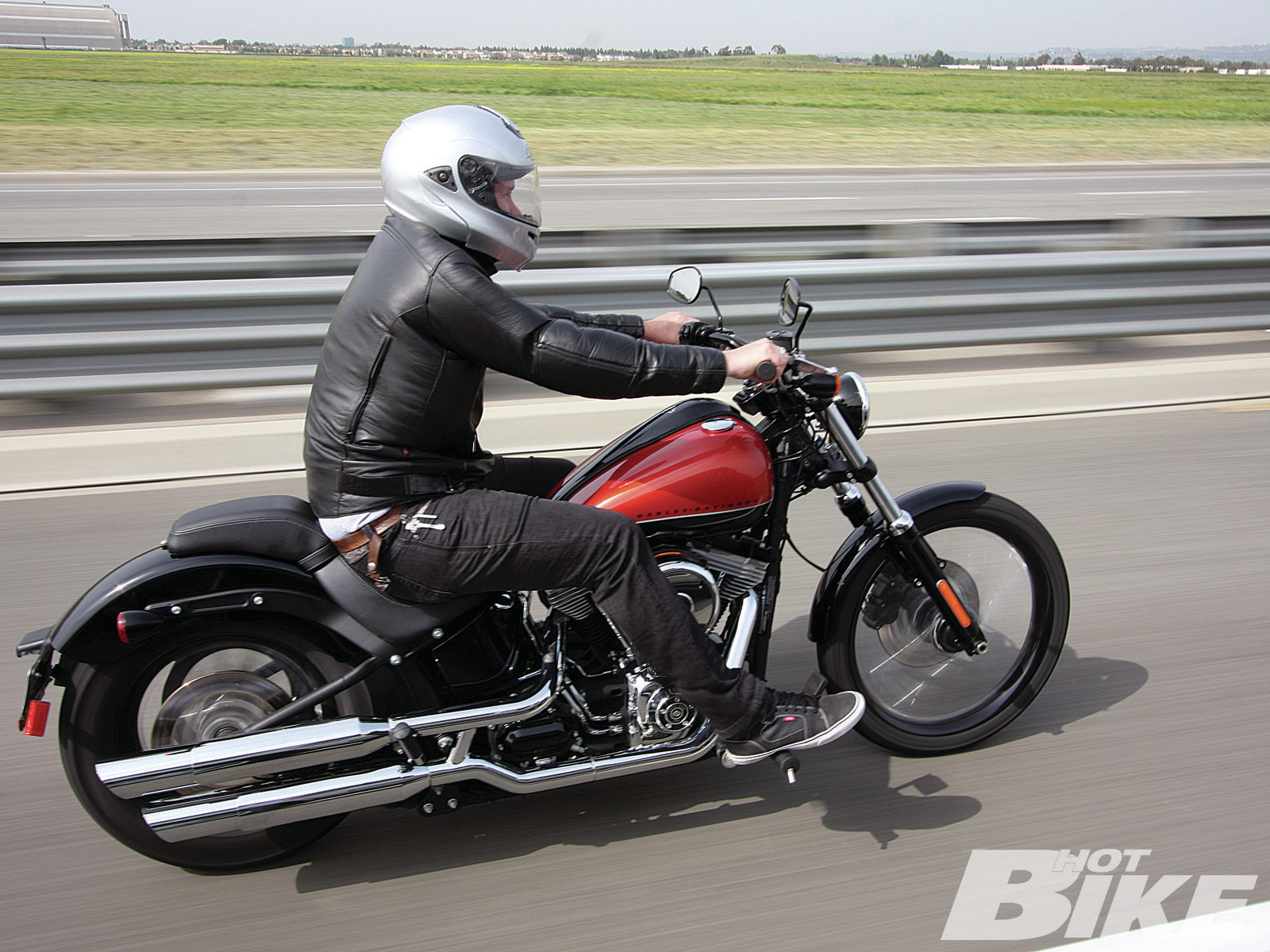 After Harley-Davidson launched its Softail Blackline, many motorcycle forums griped that the Motor Company was fresh out of ideas. Multiple blog/forum posts would question whether or not Harley had jumped the shark, saying that it just revamps regular models by switching a few things and there you have it, a new motorcycle is born. After our time with the Blackline, Harley’s Dark Custom is probably one of our favorite Softails—maybe even Harleys—in the fleet.

The Blackline is a fusion of styles. It’s a tribute bike: Evo-style air cleaner, Shovelhead-style finish on the jugs and heads, and the rigid frame aesthetic that the Softail has become famous for mimicking is a well deserved homage to the Harleys from yesteryear. However, the Blackline is loaded with many new components: Split Drag handlebars, Wide FX frontend with substantially thinner black powdercoated triple clamps, and the lowest two-up seat in Harley’s fleet. The Blackline’s frame has also been powdercoated Denim Black instead of the traditional gloss, which is a nice departure from the norm, and representative of Harley’s indelible subtlety that’s survived the company for over a century. The 5-gallon tank is asymmetrical and features a streamlined Blackline dash that’s unique only to this model. The analog speedometer mounts to the newly designed triple tree and features an LCD display illuminating a low-fuel warning and “miles to empty” function. The Blackline also features a new wider headlamp bucket measuring 5 3/4 inches in diameter to illuminate the night’s sky, and more importantly, your path. As for paint options, the split design Two-Tone Sedona Orange/Vivid Black scheme is a much-welcomed change because of its simplistic elegance; a single pinstripe separates the two colors. However, it’s available in two tone Cool Blue Pearl With Vivid Black and solid Vivid Black as well.

Riding the Blackline is extremely comfortable. The two-up seat and pillion pad cups you into the cockpit as if it were built just for you. The forward controls that aren’t too far forward seem to make a lot of sense ergonomically when coupled with the Split Drag handlebars. It’s a refreshing change of pace for hand positioning. This may be one of those polarizing arguments for some since the style is such a departure from the norm, and people fear change; kudos to Harley for taking a risk.

The 96ci Twin Cam engine and Six Speed Cruise Drive transmission come standard on the Blackline. This combo has provided plenty of oomph since its release in 2006, and it’s still going strong. How long until you see larger displacements across the board on new Harley models? Who knows? But we bet you’ll see updates in the powertrain department aboard its OE fleet soon. Until then, the 96/6 system works well. Attached to the cylinder heads of the 96 mill is the Over/Under Shotgun Exhaust system, which is a classic style, and complements the overall design elements of the Blackline.

If you’re a stickler for braking power, optional front and rear ABS is available. Harley’s ABS is definitely something worthy and has improved the bike’s stopping power substantially, adding confidence to push the Blackline to its limits as far as handling and performance characteristics are concerned. And handling is definitely something that’s improved on Harley models as of late because the rear tires are getting thinner and thinner. Slowly fading are the days of 200mm-plus rear tires. Hello nimble 144mm rear tread! As far as other options are concerned, cool is one option that’s not always available for purchase, until now. In fact, cool in this case weighs out every other option. The Blackline epitomizes cool. HB