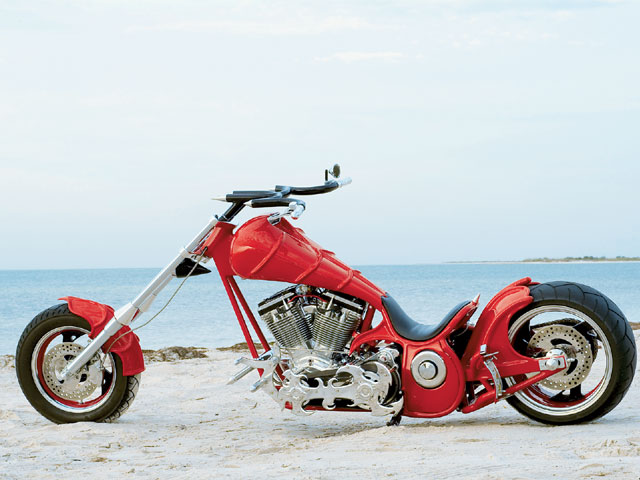 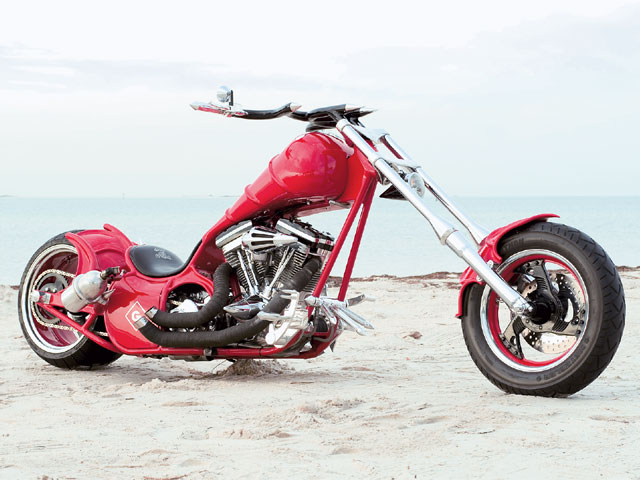 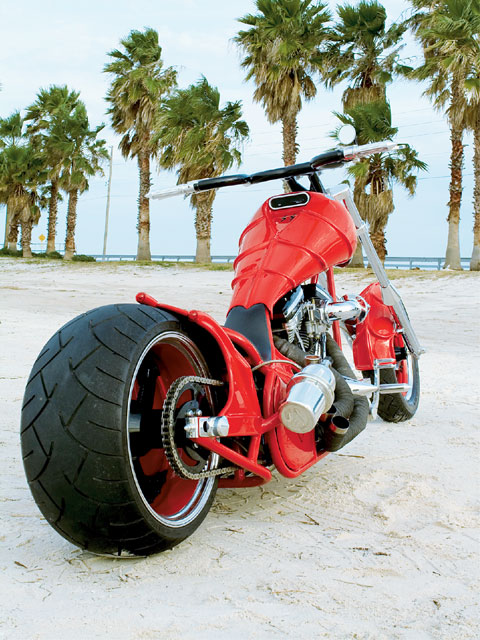 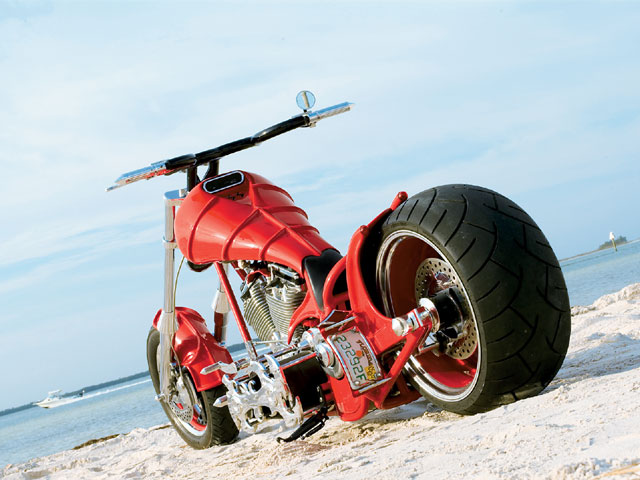 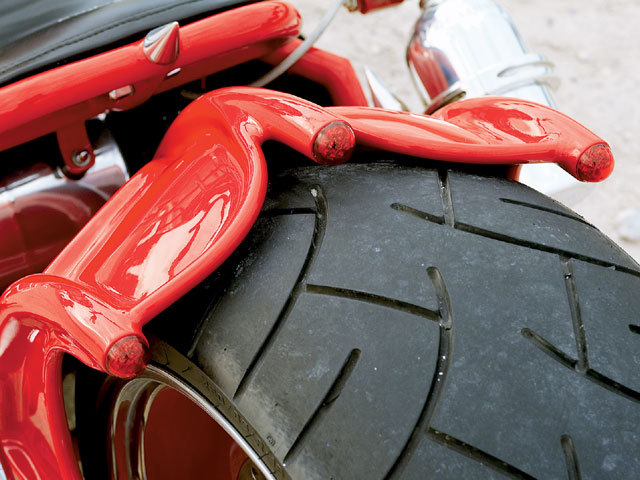 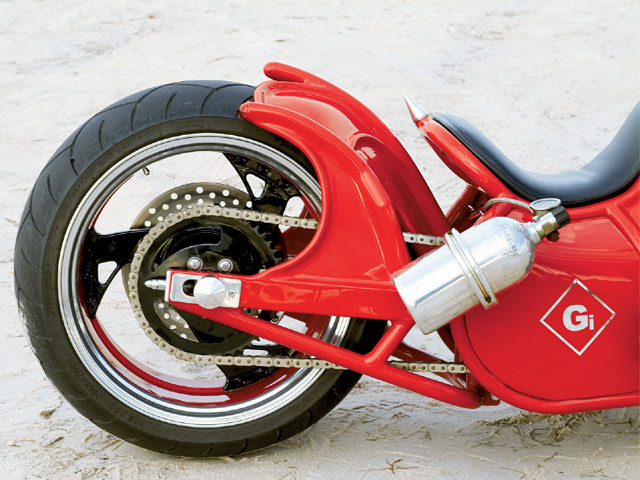 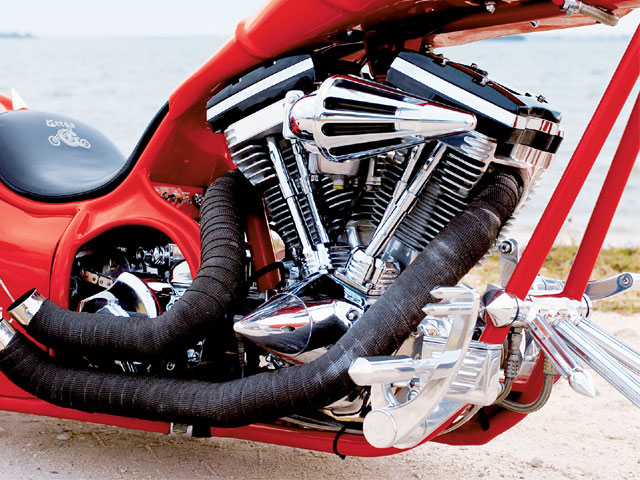 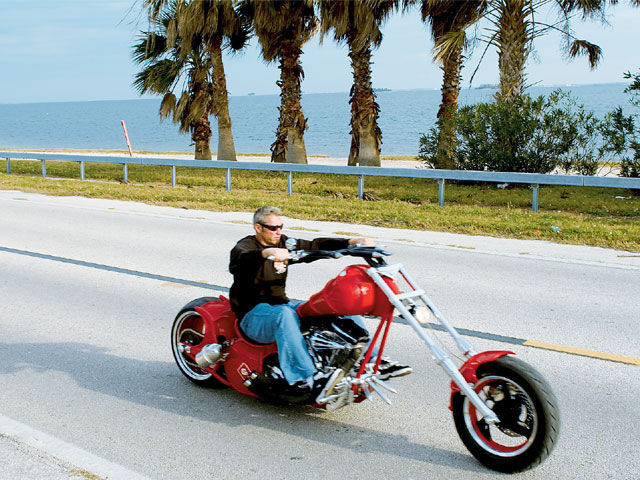 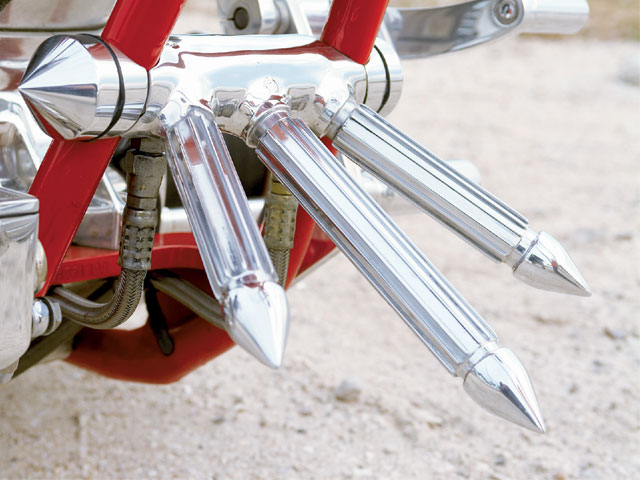 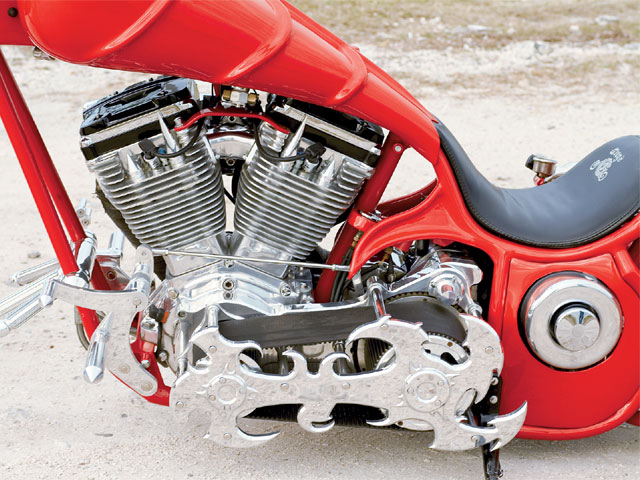 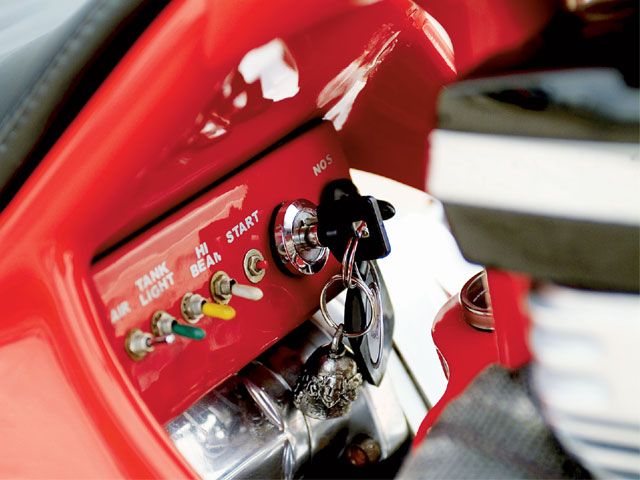 When George Gaffin first walked into Greg’s Custom Cycle Works, he just wanted to get his pile of parts running down the road. Turns out that George had purchased, essentially, a rolling basket case. Most of the parts to make it tick were there, but the bike was in sad shape, leaking and not running. George wanted Greg, owner of the Clearwater, FL, shop, to fix the motor and give it some paint to make it a little more presentable.

Greg began by looking over the EVO motor filled with S&S; goodies and topped with Edelbrock heads. That was about the only good part of the rolling anchor George brought in. The first part of the job was to take care of the motor-work. After tearing down the entire mill, balanced S&S; flywheels were fitted between the cases, while both cylinders were bored and honed to accept new big-bore Wiseco pistons. With 103 screaming inches of power to play with, Greg decided to port, polish, and flow George’s Edelbrock heads for maximum breathing capabilities. Greg called George to tell him his thoughts and to convince him that the rest of the bike needed work before there was any hope of riding it. Thinking it over, George decided to give Greg and crew carte blanche when it came to rebuilding the scoot.

Without delay, Greg had the rest of the bike stripped down to a bare frame. He didn’t like the skinny tire frame, so out came the Sawzall and goggles for a little frame surgery. He got a little carried away, and in the end only the neck and the front motor mount were reused. He dusted off the protractor and frame jig to begin welding up a new cradle. Greg settled on a radical 45-degree, double-downtube, Softail-style frame with 12 inches of stretch in the backbone. Steel sheetmetal was used on the sides of the frame to add some style and conceal the oil bag and electrics. A cutout on the left-side cover allows easy access to the oil filter. A wide swingarm was fabbed to accept a 280mm Metzeler tire wrapping a RC Components wheel. Integrated into the complicated swingarm are the rear struts and fender. The fender is made out of steel and houses three LED taillights that extend beyond the edge of the curved fender. Both handmade fenders and the gas tank feature three-dimensional raised ribs that were fabbed out of steel, not Bondo. All sheetmetal was painted in-house with red PPG paint.

A 12-inch-over frontend was added to the raked-out frame and holds another RC Comp billet wheel and rotor that’s clamped by a RevTech caliper. Atop the Hawg Halters raked triple-trees sit one-off one-piece handlebars with built-in risers that curve back to the rider. All of the wires and cables are hidden within the handlebars. Even the speedometer drive goes through the backbone. Greg fabricated a custom headlight from steel, adding it underneath the bottom triple-tree to keep the top half of the bike clean. Most of the parts on the bike were either made or modified by Greg, such as the one-off mirror stem, radiused and retapped foot controls, modified footpegs, and unique oil cooler. The three spikes that extend from the bottom of the downtubes are actually a fully functional oil cooler-the oil flows in to and out of each of the points. Pretty trick.

With 103ci of motor to contain, Greg decided to upgrade the transmission to a Baker right-side-drive unit, hooked up to the rear wheel via a chain final drive. A fat open-belt primary from HiTech feeds the six-speed and is protected with a tribal billet cover. That stainless-steel cylinder hanging off the right side of the bike is for nitrous oxide-the go-fast gas helps get the fire lit after passing through the S&S; Shorty carb. Power to the NOS system comes from a switch box beneath the seat that also controls ignition, lights, and air pressure for the rear shocks as well as tank lights. The three spikes that extend from the bottom of the downtubes are actually a fully functional oil cooler.

Just about every facet of this build was carried out in Greg’s shop-none of the work was farmed out, and very few off-the-shelf parts were used. When Greg did use aftermarket parts, he modified them. George was a pretty happy customer the day he came in to pick up his one-of-a-kind bike. Wherever he goes, people crowd around to look at the unique bodywork and the long, low lines of Greg’s custom chassis. We should all be so lucky to have our basket case of parts turn out so wild.