When I see FXR Division’s 2018 Fat Bob from the Hot Bike Tour, I ask myself, “Why isn’t Harley-Davidson making something like this?” The obvious answer being that a great deal of craftsmanship went into it and the skill set involved doesn’t (and shouldn’t) come cheap. That’s because Justin Coleman and Christopher Staab wanted to create a modern performance V-twin with classic styling cues inspired by roadrace bikes of the past. You can’t just bolt up a bunch of parts from a catalog and call it a day with that sort of project. At least some of those parts have to be made from scratch.

In the beginning, though, you strip the stock bike down to its bare essentials, tossing out everything that isn’t the motorcycle you’re creating. FXR Division reduced this Fat Bob to its frame and powerplant, then started adding what they wanted. 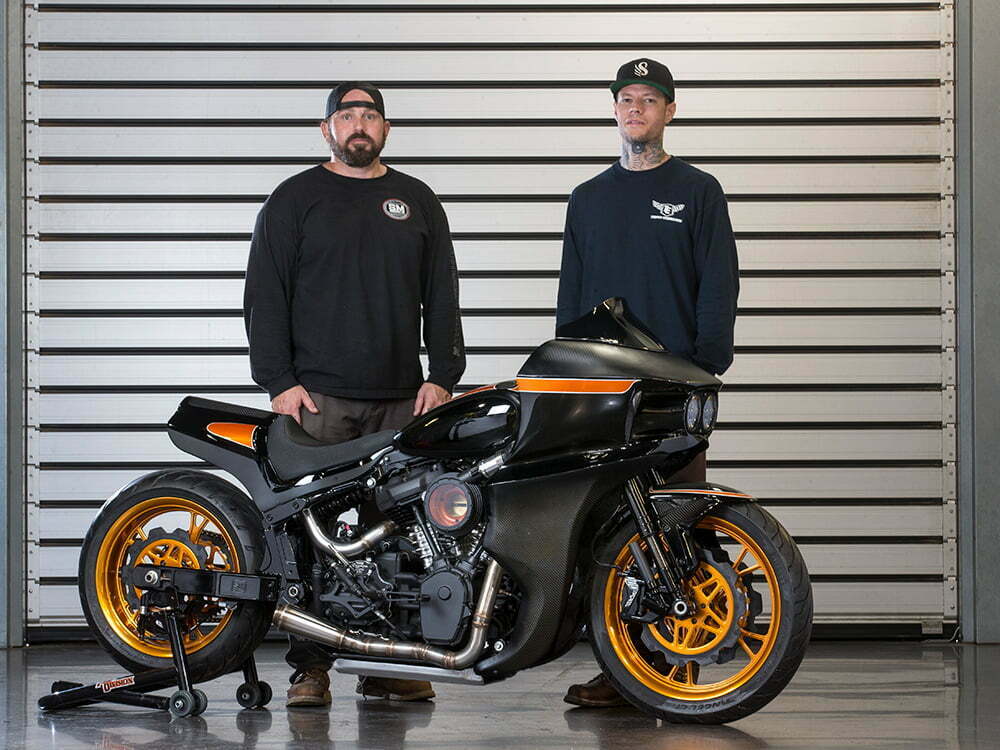 Part of which was gobs more power. “She backs up the image she portrays and does it with style,” Justin and Chris told us. “Corners hard, stops fast, and with the 151ci Milwaukee-Eight she’s hard to hold on to.” Yes, that’s right. One hundred fifty-one cubic inches of American muscle power this beauty. Danny Wilson builds ’em big and bad like that and worked his magic to ensure this bike walks the walk. The mega-mill is a combination of Leading Edge Performance, S&S Cycle, and Harley-Davidson parts with CMP Motorcycles airbox, exhaust, and Horsepower Inc. throttle body for breathing.

Hard cornering and quick stops aren’t the engine’s department though. Obviously, it’s the suspension, wheels, and braking that take care of all that. Lenny Albin put together the front end but the rear suspension is a combination of a Speed Merchant swingarm teamed with Gears Racing Suspension monoshock. FXR Division added a modified Rebuffini triple tree to the mix as well, completing a recipe for mayhem that’s accented by Lyndall’s FXR Division series wheels, Pirelli tires, and Rebuffini brake calipers over Lyndall rotors. 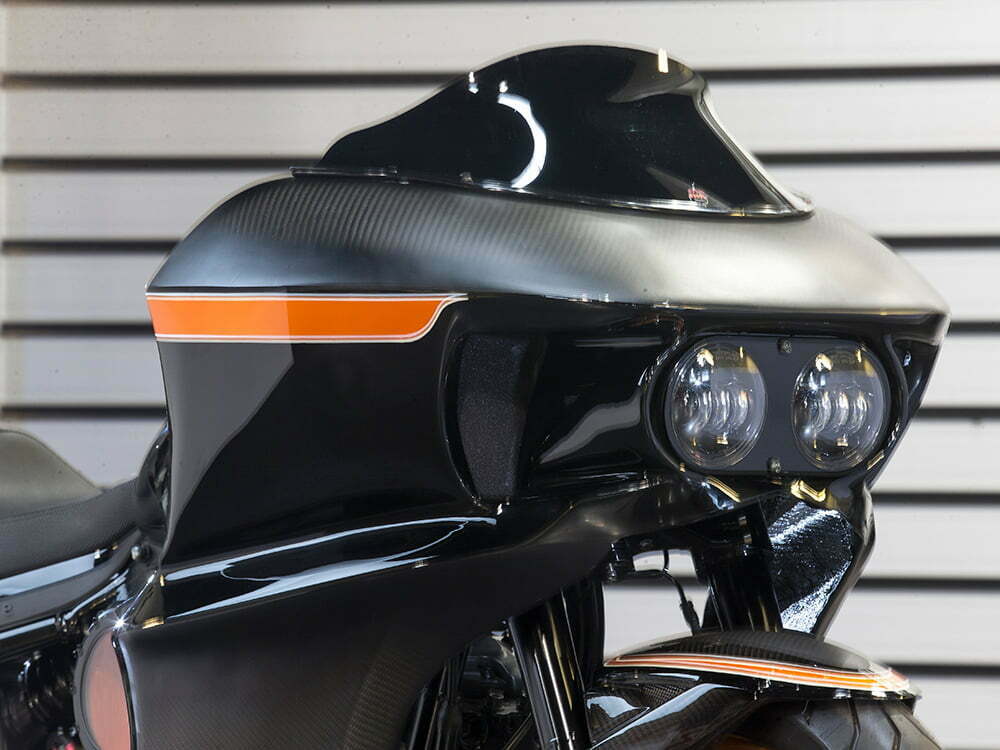 Low, tinted windscreen for a little shielding without breaking the sleek profile.

Taken together, all of this power and tricked-out handling is awesome. The icing on this cake of evil is its sexified roadracer look. From nose to tail, it flows smoother than the lies from a politician’s piehole but with all those performance components, it keeps the promise of high-performance riding that its looks make. The gas tank may be Harley-Davidson, and the fairing bears the shark-nosed pedigree of a Road Glide, but the bodywork defining this Fat Bob as a roadracer was made in-house at FXR Division, as was the handlebar. Knowing what to use to get desired results plus being able to craft what’s needed to complete the job are skills builders like Justin and Chris learn over years of hard work, culminating in bikes like this: motorcycles that you’d love to find in a dealership but never will. 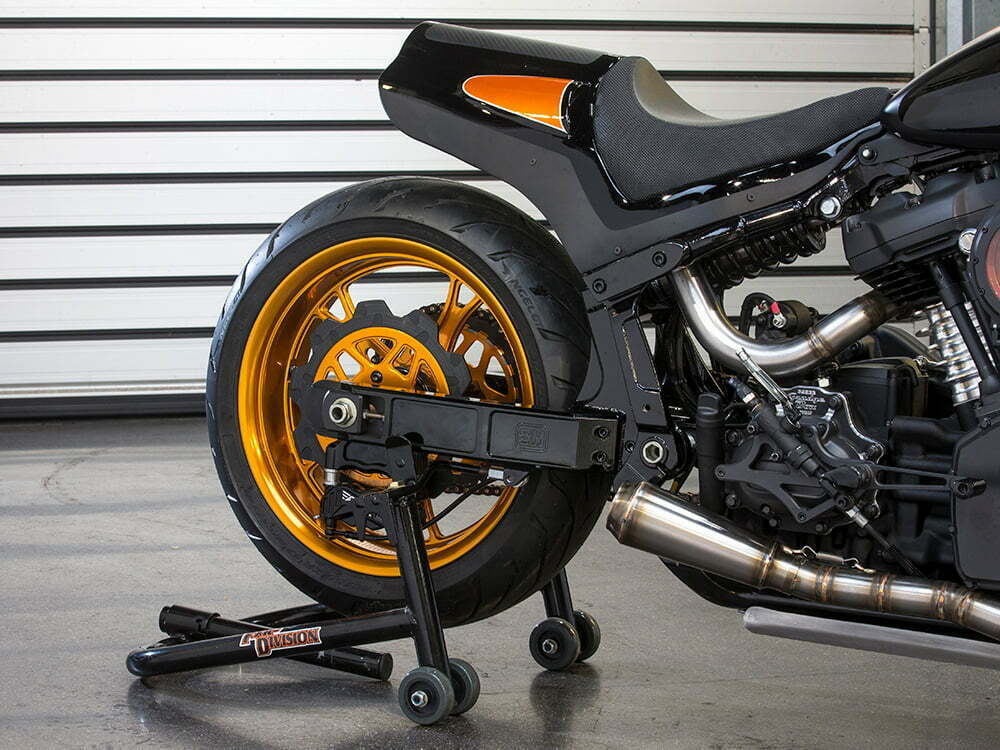 Color-matched floating rotors and Lyndall wheels make sure the bike is styled in. 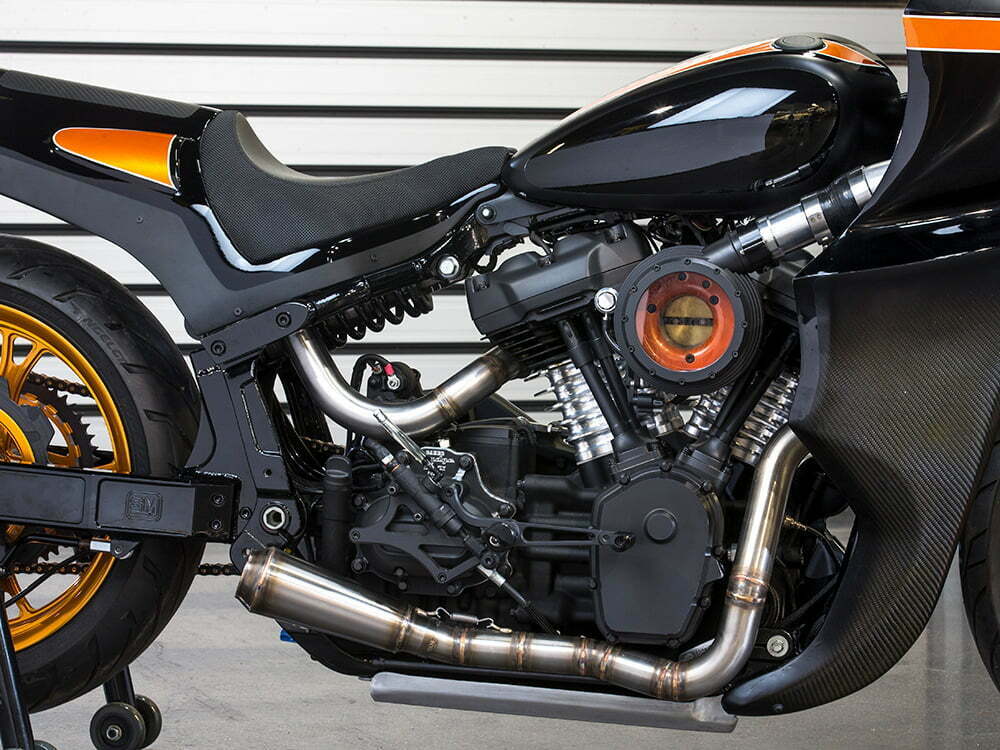 When it blasts past you on the asphalt, you have just a tenth of a second to notice the blur of the CMP Motorcycles breathing setup… 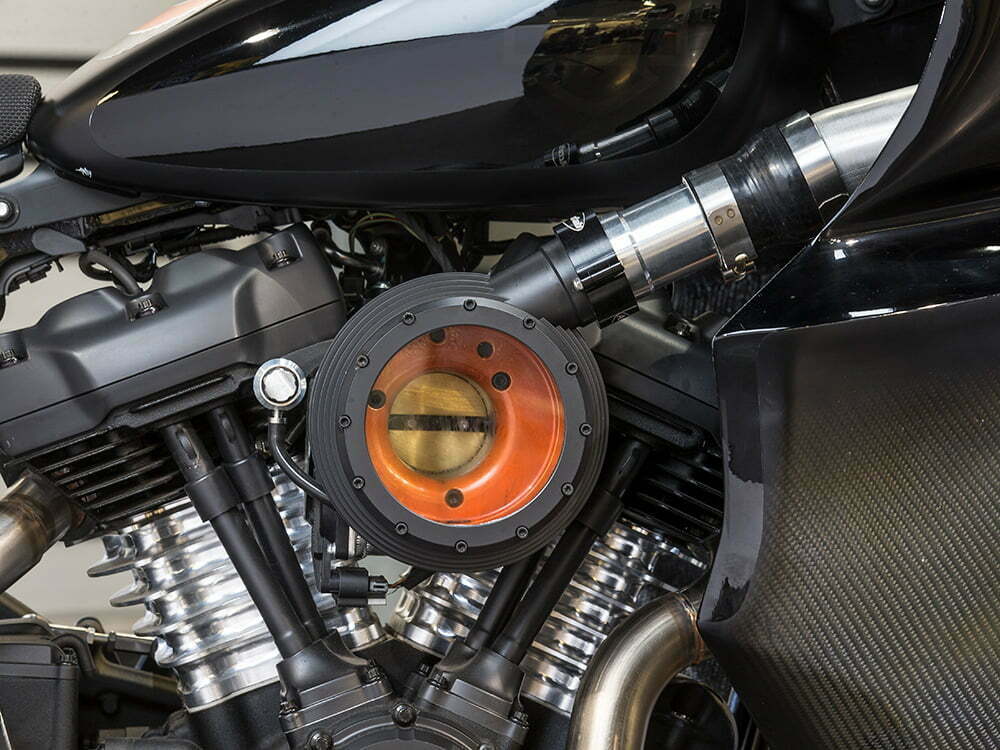 …let alone what looks to be a CMP turbo kit attached to it. At 151 inches of displacement, you need forced induction because of horsepower mayhem reasons. 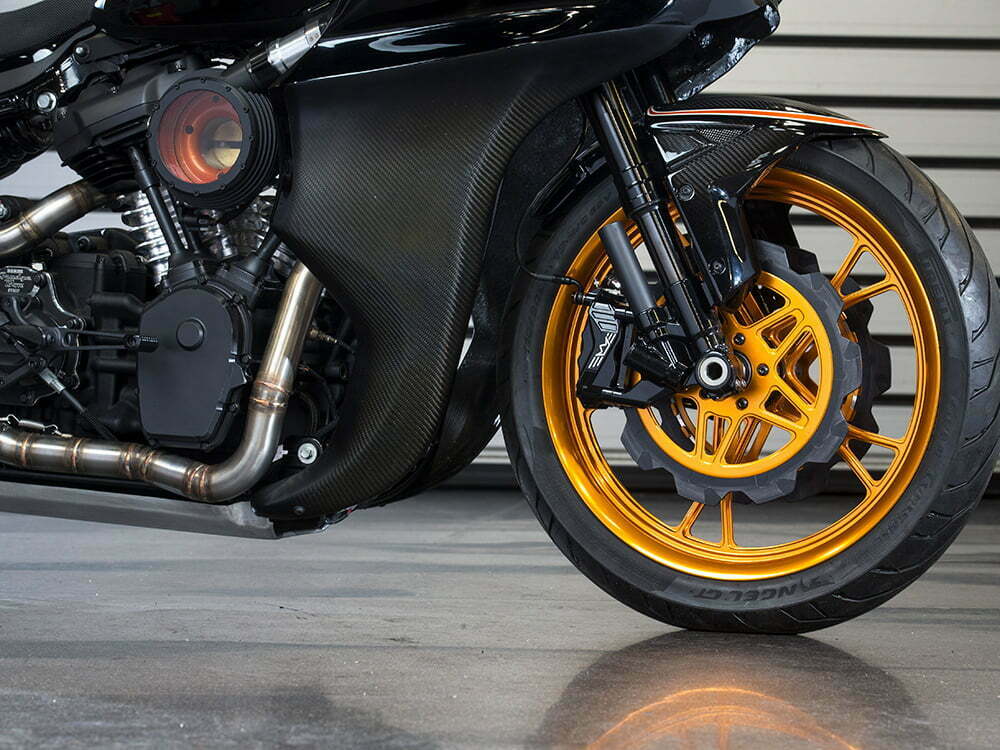 All that carbon-fiber goodness adds to the appeal too (among other things). 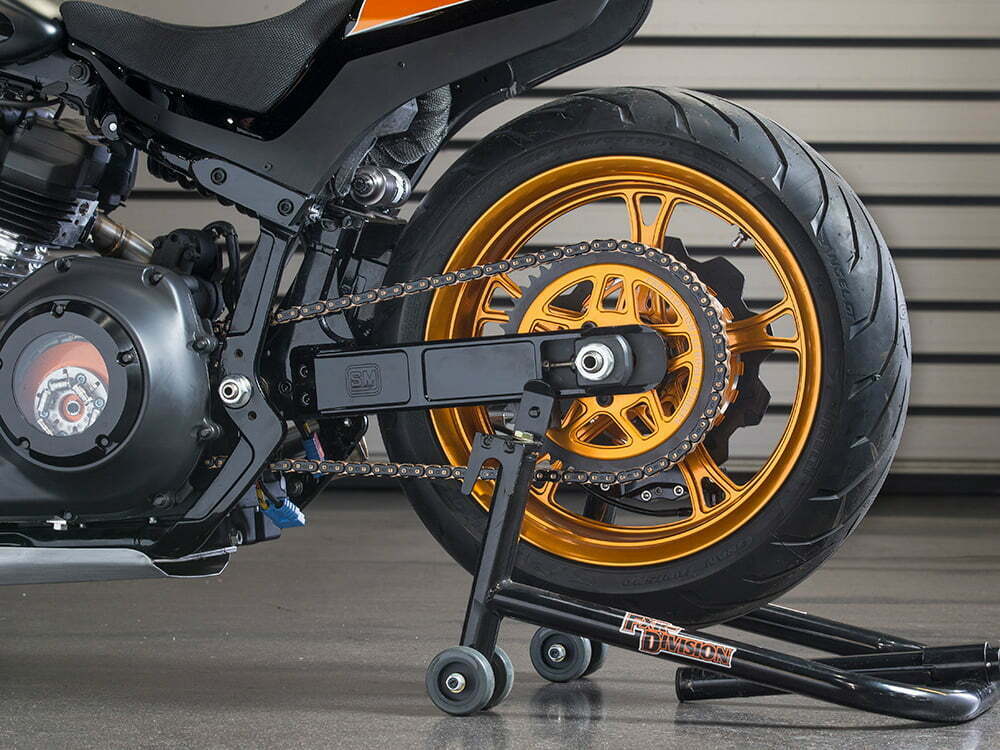 FXR Division switched to a chain drive to handle all that extra power going to the back wheel. 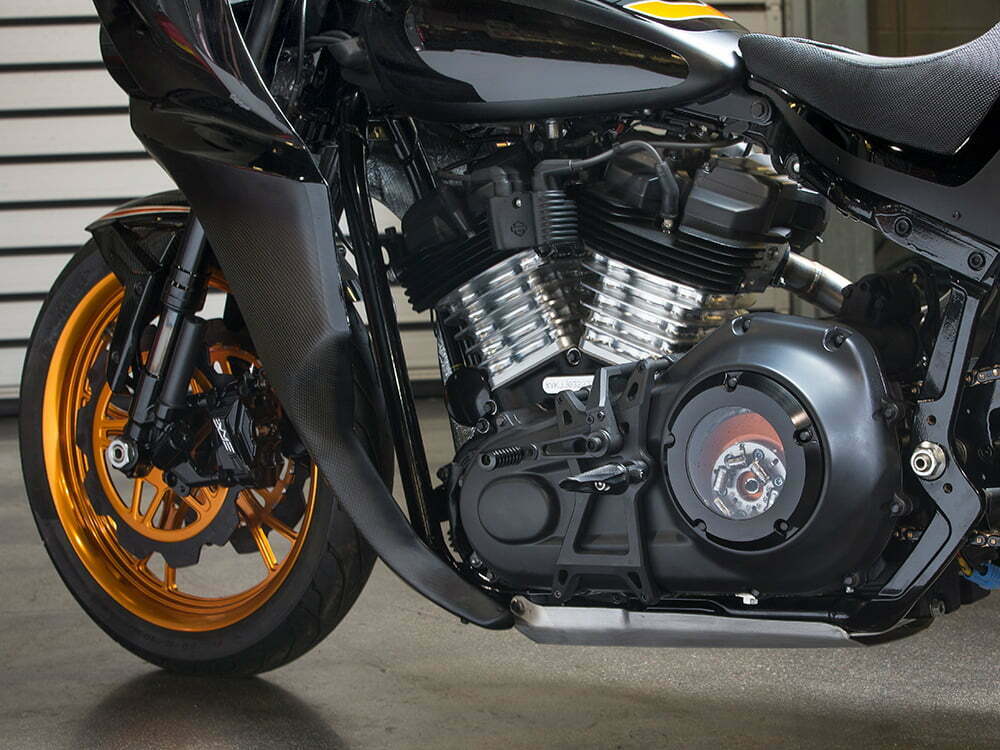 Even on the homely half, the engine and primary look pretty damn good. 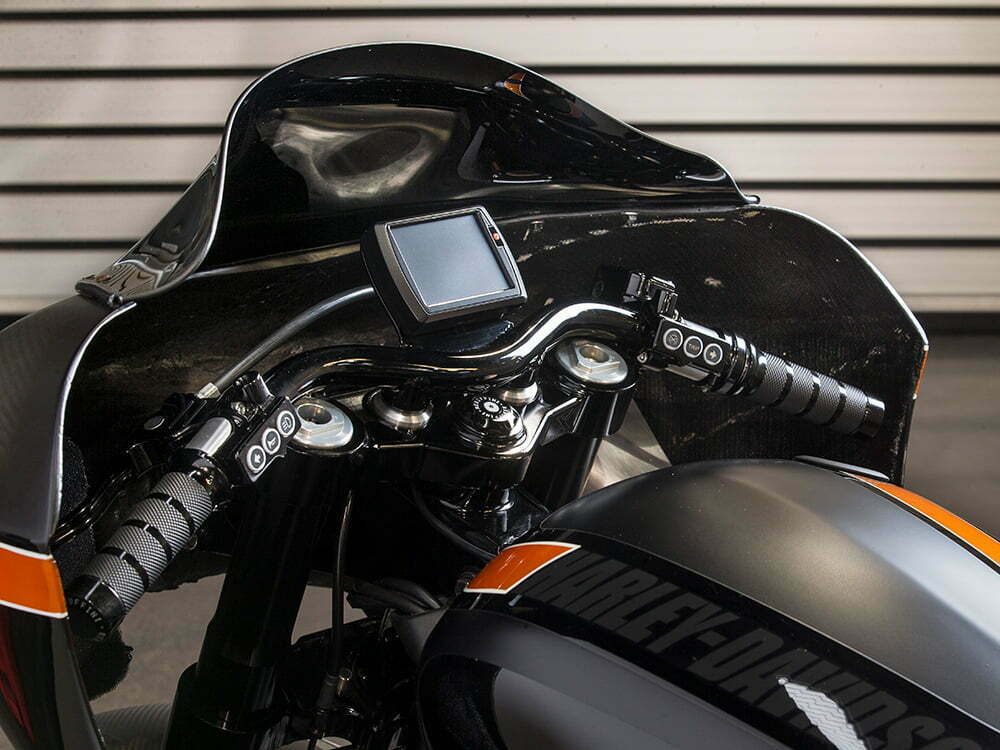 FXR Division bracketed its handlebar with Rebuffini grips and controls. Dynojet’s Power Vision flash tuner is as close as the motorcycle gets to having gauges. 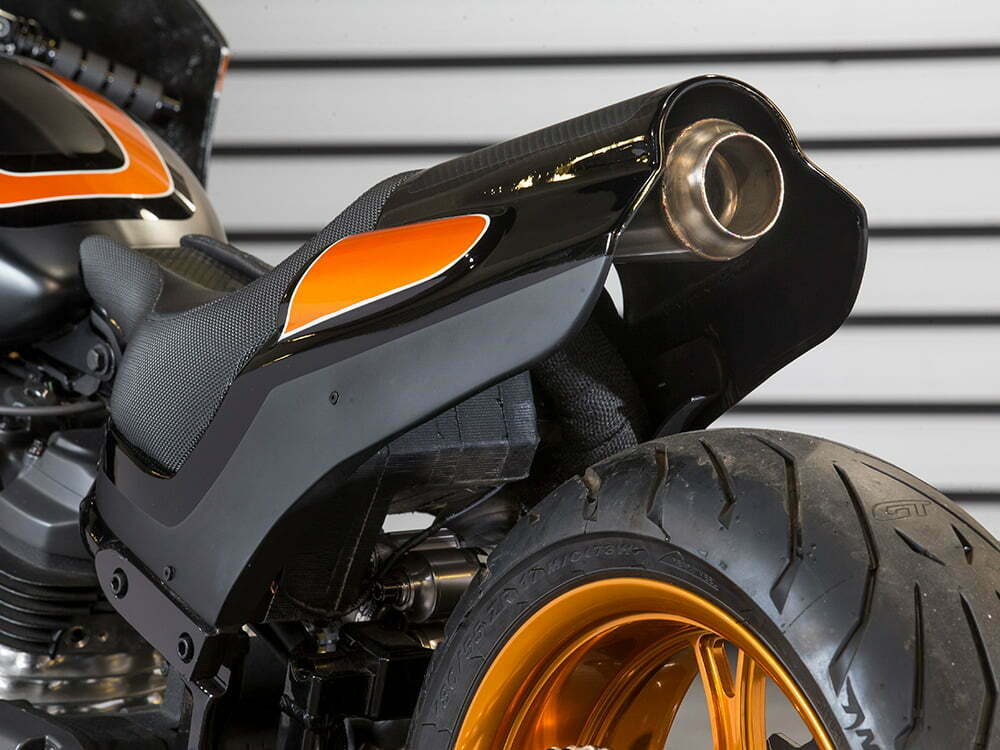 The rear tailsection completes the old roadracer look. Note how the rear cylinder exhaust pipe exits through the back. 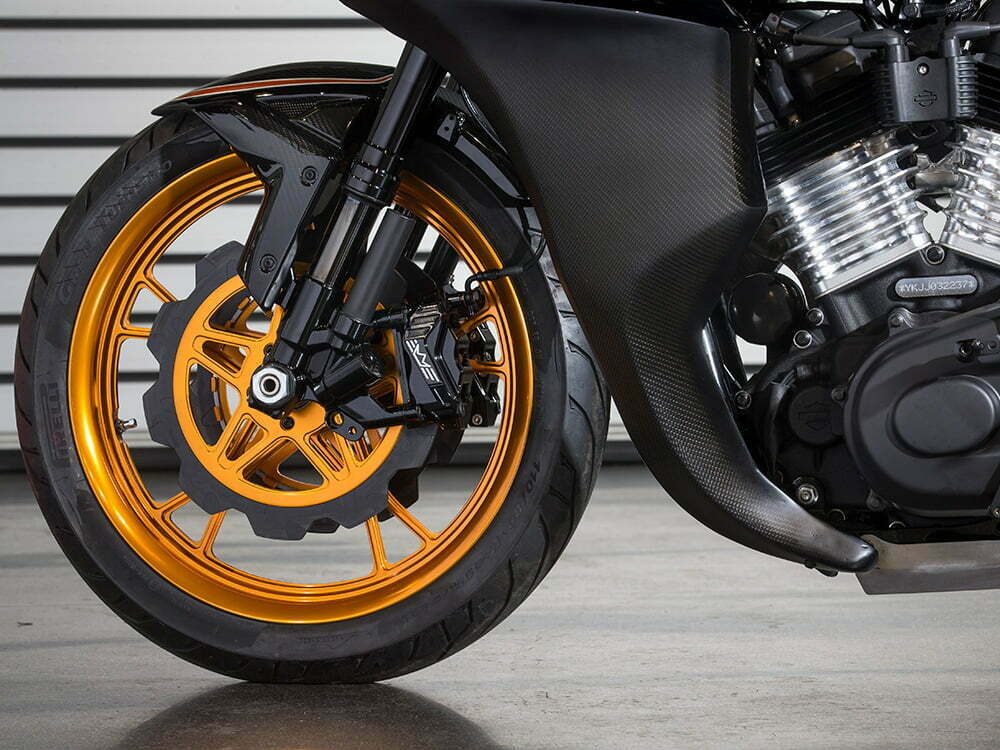 Just to make sure there is enough stopping power, the front brake configuration is of the dual persuasion.