Fishtail Tech – King Of The Fishtails 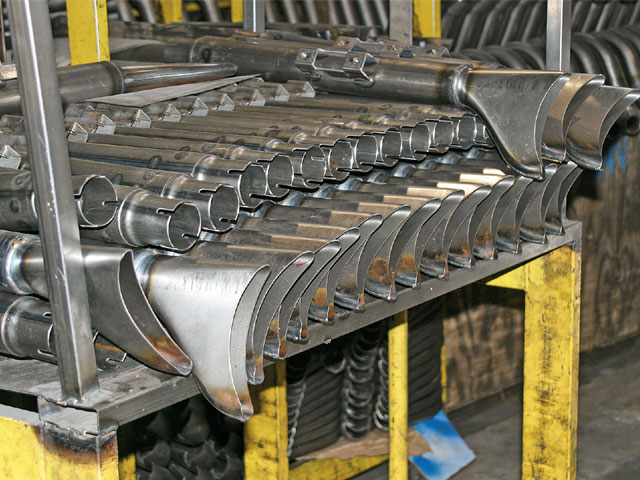 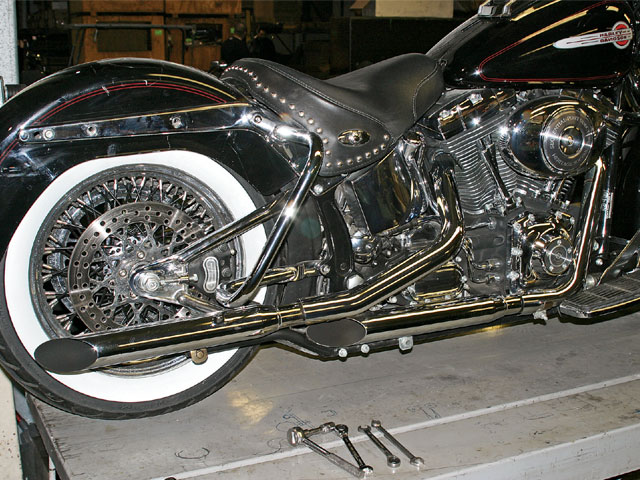 We liked the looks of the staggered pipes that were already on the bike, but we felt that a set of fishtails would be a better fit for the new “lowrider” look we were going for. 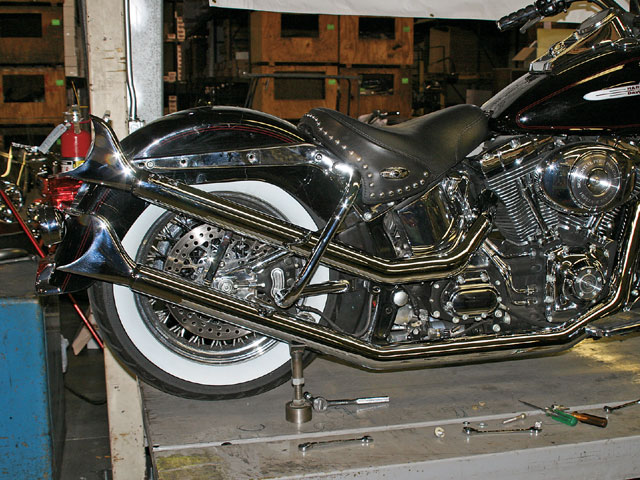 The first set of pipes we tried out were the Samson Renegades (part No. S-812; MSRP: $599.95). We liked the long, upswept look of the Renegades, but since this bike is a Heritage Softail with bags and rear crash guards, we knew they wouldn’t work out. In fact, as you can see here, we had to use a stand to prop the pipes up for the photo because the bottom of the right crash guard prevented the pipes from lining up with the mounting bracket. 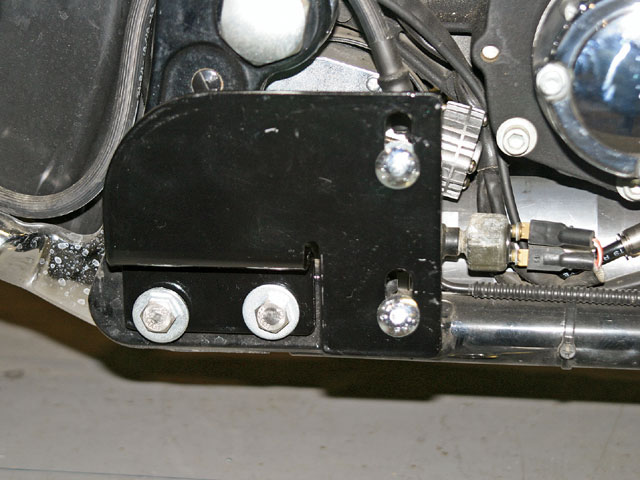 The Longhorns were the next set we tried. Before they were installed, the mounting bracket was secured to the bottom right side of the frame side plate. 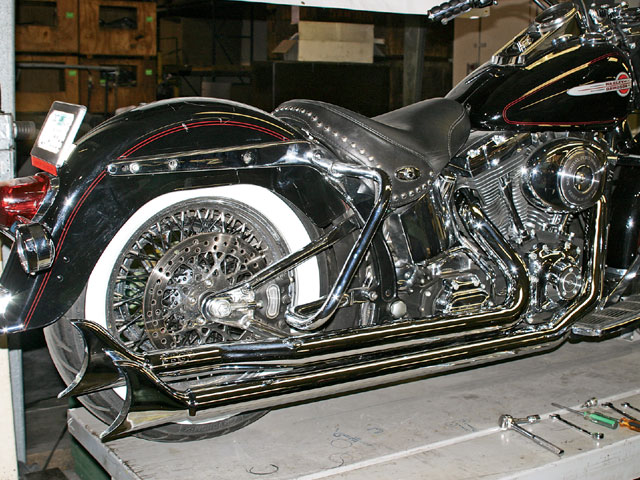 The Longhorns (part No. S-811; MSRP: $599.95) fit perfectly right under the bottom of the crash guard. What we liked about these pipes was that the rear pipe had a slight inward jog at the rear of the swingarm, which set the tails about 4 inches apart from each other for a unique look. We also liked the fact that, similar to the Renegades, these pipes were each one solid piece and very easy to bolt on-no mufflers or end caps to worry about. But these still weren’t what we were looking for. We wanted a true dual-type system with the pipes running on either side of the bike. 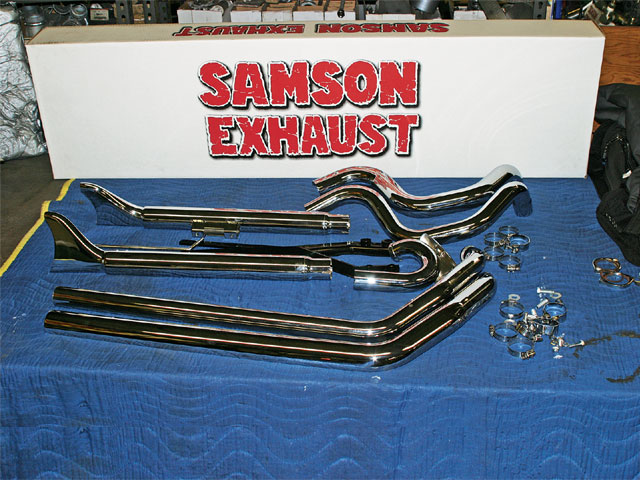 We found the style we were looking for in the True Dual Fishtails (part No. S-430; MSRP: $659.95). As you can see, the true duals have quite a few more parts to them than the other two systems we tried. Shown here are the headers, mufflers, heat shields and clamps, and mounting brackets. 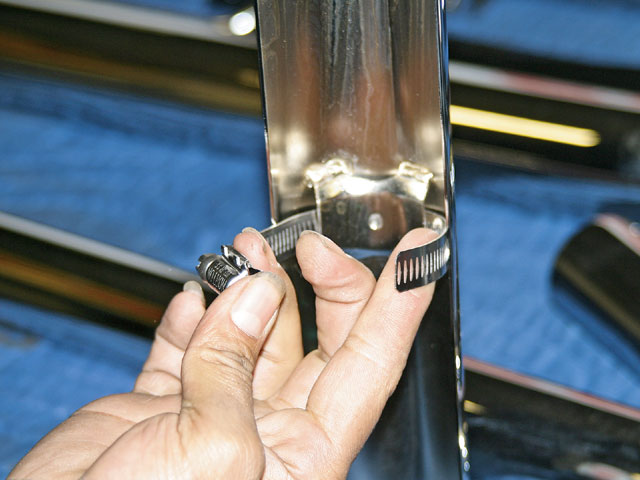 To make things easier before the system was mounted, all the clamps were slid into position in the heat shields. 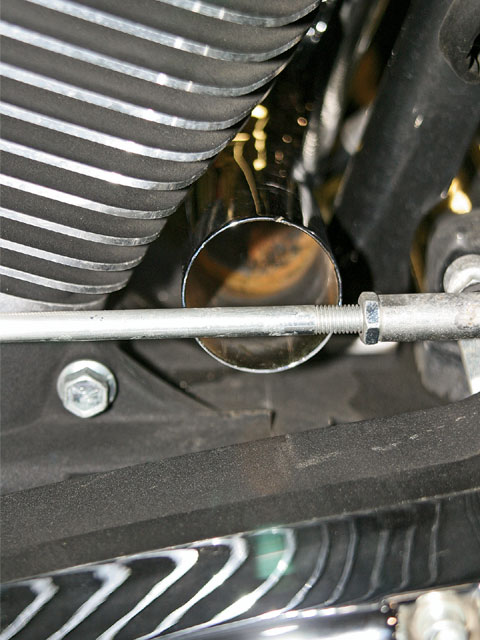 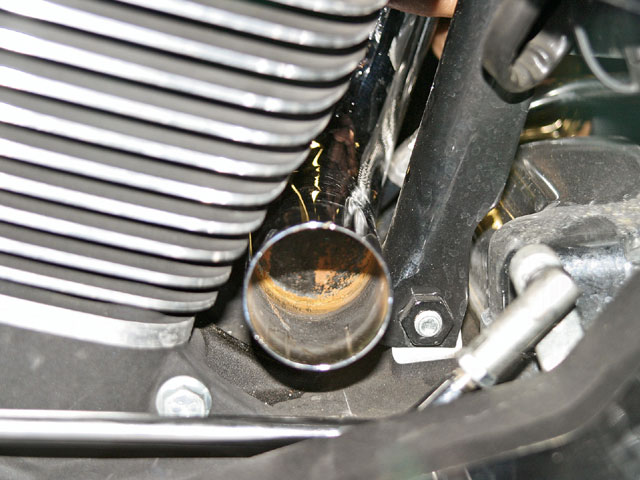 To resolve the problem, Samson provides a new shift linkage that has about a 45-degree bend at the back. This bend drops the shift linkage down low enough to provide clearance for the head pipe. 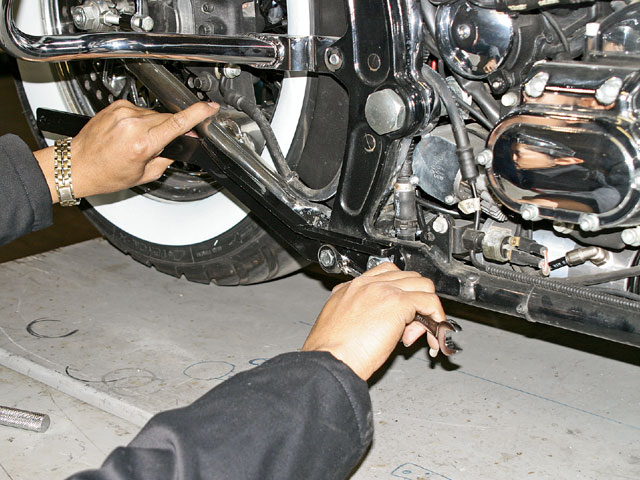 These true duals have two mounting brackets, one for each side. The brackets mount to the back of the lower framerails/frame side plates. 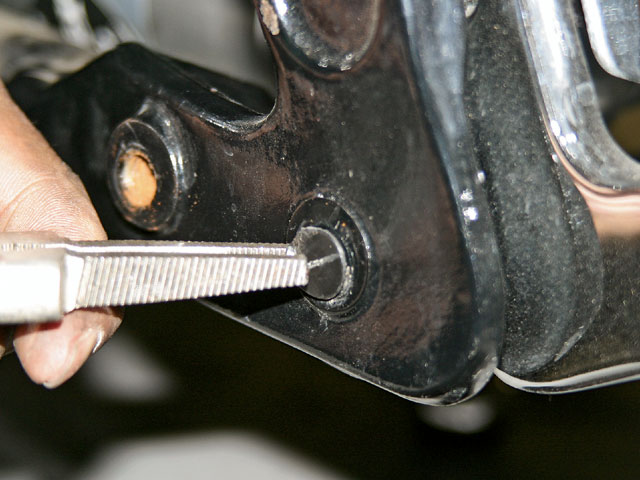 Here’s an important note: If you’ve never run a set of dual-style pipes on your bike, then most likely the framerail/side plate on the left side will still have the factory plastic plugs in the mounting holes. The plugs are threaded, so take care when removing them. Often it’s easiest to use a set of needle-nose pliers to twist them out. 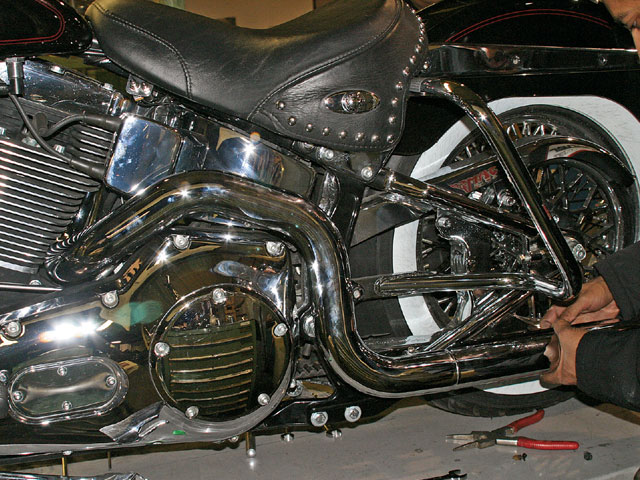 The left pipe has a center pipe that mounts between the head pipe and the muffler. Here you can see how the center pipe flows with the back of the primary for a nice, clean look. 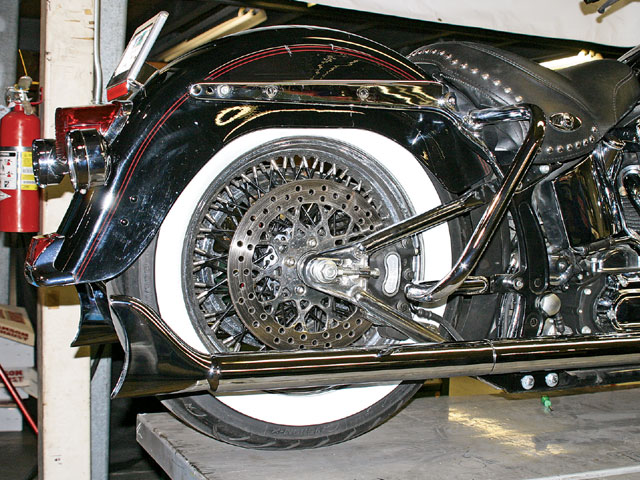 Here’s how the S-430 system looked once installed. The traditional true dual style, with each fishtail tucked in close to the rear tire, is more of what we were wanting for this bike. The S-430 system has mufflers that are about 18 inches long, with the tips lining up with the back of the tire. While we liked this look, we were informed that Samson had just come out with a new system that was identical to this, but with even longer mufflers. 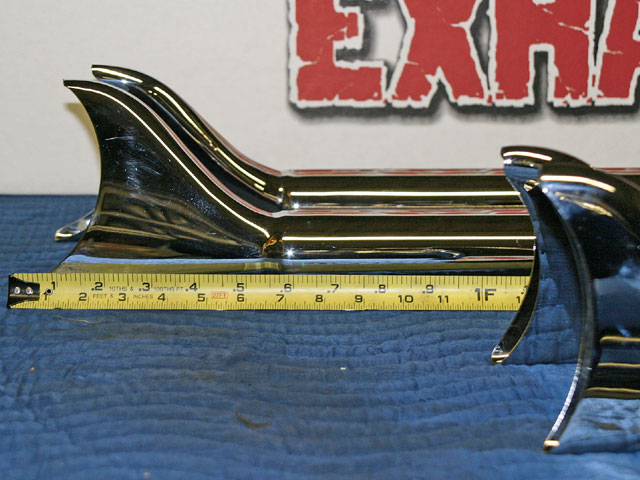 As we all know, the only way to properly document a whopping fish tale is with photographic evidence. We lined up the S-430 mufflers next to the new Softail Cholos S-435 mufflers and pulled out the tape measure. The mufflers on the S-435 system were a foot longer. 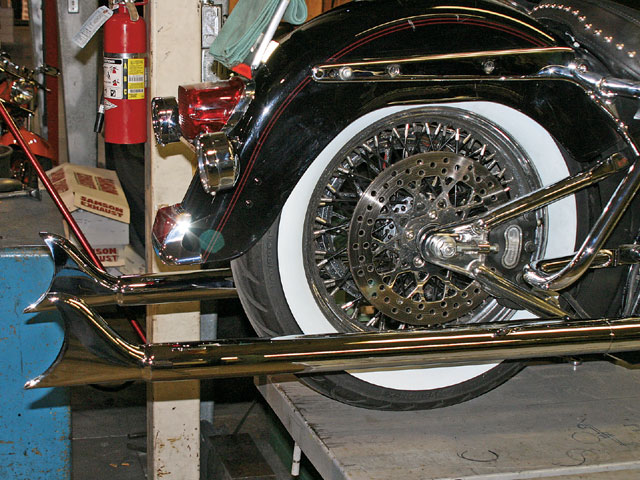 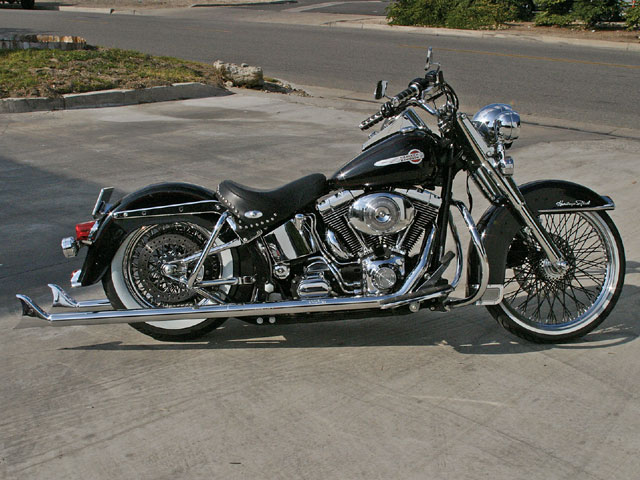 After installing four fishtail exhausts, we liked the new S-435 Softail Cholos the best. They really highlighted the look we were going for. The combination of the spoked wheels, dropped stance, and exhaust hanging way past the end of the bike really gave the bike attitude and, more importantly, SoCal lowrider street cred. Aside from their looks, these pipes sounded great. We thought they were going to be real loud and raspy/rapping like most fishtail systems. However, they had a nice, deep rumble like a hot-rodded V-8. And even though we didn’t dyno the bike, it felt as though it had the same-if not a little more-power.

While trends such as fat tires and lighting your engine up like a Christmas tree may come and go, when it comes to customizing motorcycles, there are some looks/styles, including ape-hangers and fishtails, that will never go away. No matter whether you’re building a ground-up chopper or bobber, or just giving your stock bike a makeover, a fishtail exhaust system will always be in style no matter what year it is.

There are several companies in the marketplace that make complete fishtail exhaust systems as well as mufflers and/or end caps, one of which is Samson Exhaust. Samson has been around for more than 16 years and has been producing fishtail-style exhaust systems for almost as long. Through the years, Samson has led the school of fishtails (sorry for the pun) by creating new looks and styles of the old originals. Currently Samson offers more than four different types of fishtail exhaust systems for H-D Softails.

Samson’s fishtail lineup for Softail models feature 1-34-inch head pipes, and 2-1/4-inch mufflers. All of the fishtails come with internal baffles welded in place to help improve sound and performance. And, like all of Samson’s exhaust systems, the company’s fishtails come with a mirror-chrome finish, all necessary mounting hardware, and a one-year warranty against manufacturer’s defects. We had an ’03 Heritage Softail in our fleet that had a set of staggered baloney-cut pipes on it, and we were looking to change up the look with some fishtails. Since Samson is right in our backyard in Brea, CA, we took a trip over there to see what the company had to offer.