Easier And Cheaper Than You Think 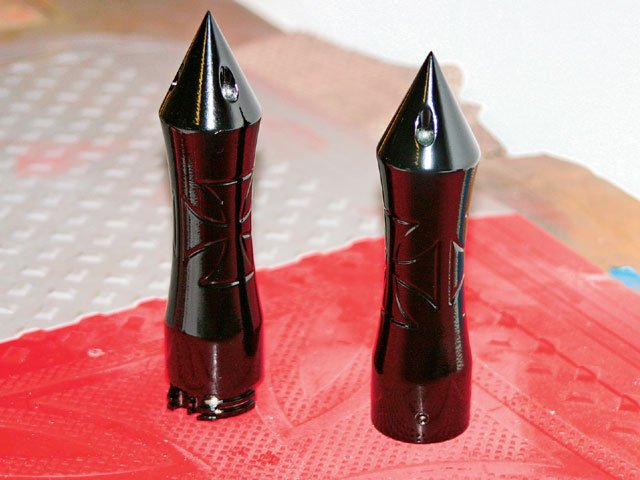 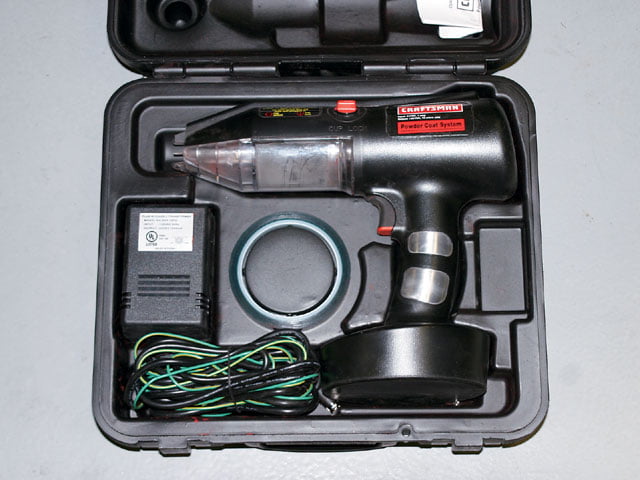 Here’s the Craftsman Powder Coat system, which comes with everything you need to start your own garage powdercoating business. On the lower left you can see the ground wire that is attached to the part being coated, along with the electrical transformer. This hookup provides the negative charge to the metal. 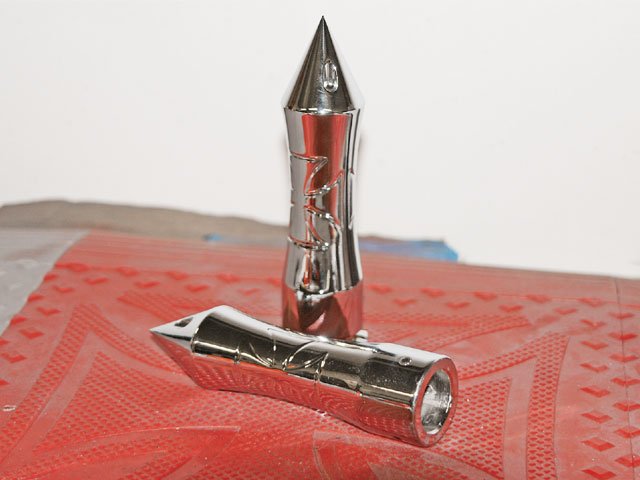 Amir started with a pair of chromed aluminum grips that he wanted black. Yes, you can powdercoat right over chrome. Any metal, but it needs to be clean of rust, corrosion, and paint. It’s important to clean any grease, including fingerprints, from the metal to be coated. He used denatured alcohol to clean up the grips, but paint thinner or your wife’s nail polish remover will suffice. 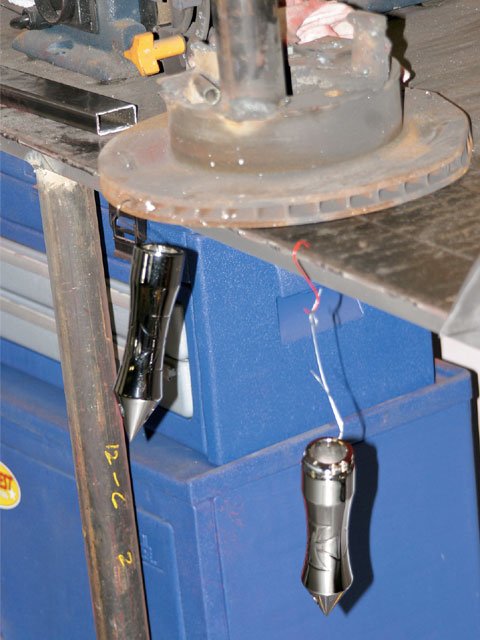 Amir used bare metal wire to secure the grips to the workbench. It’s important to use an electrically conductive material to hold your parts… 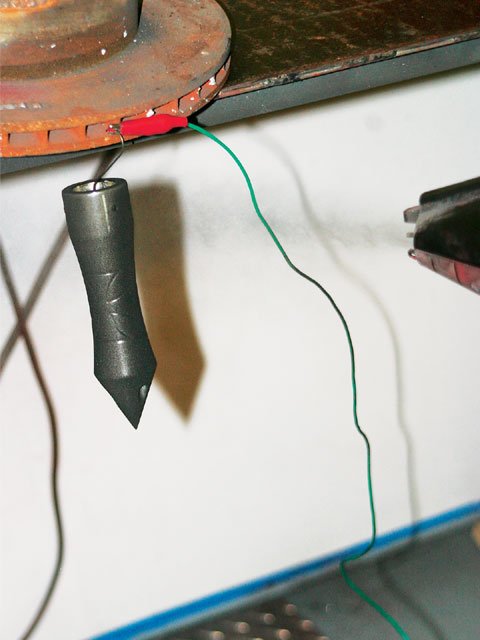 …because that’s how the ground clip can negatively charge the part. Here you can see the cloud of powdercoat leaving the gun and coating the grip. 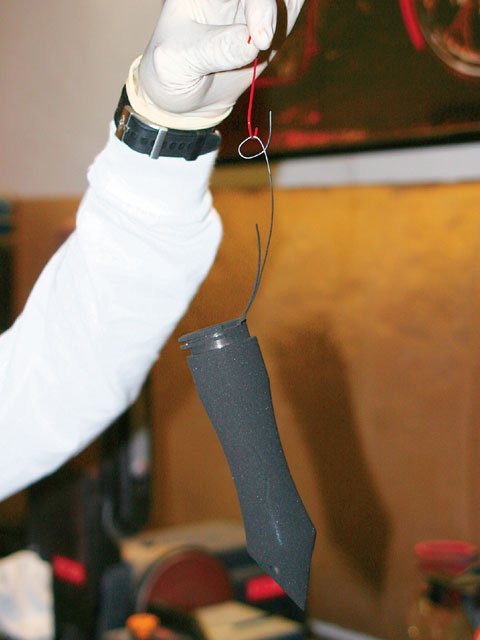 After covering all sides of the grip, it was picked up by the wire… 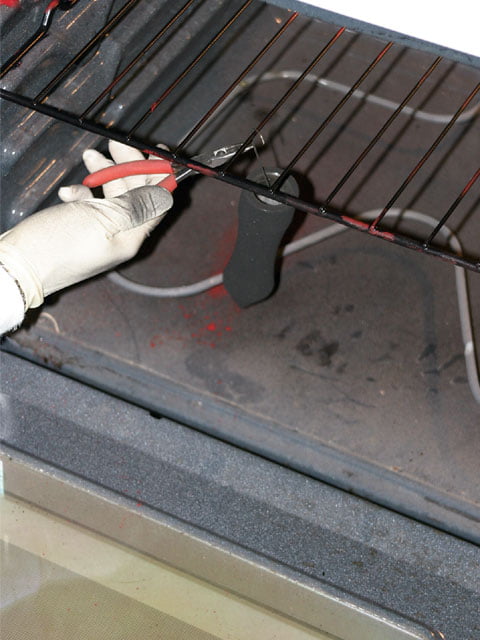 …and carefully moved to the preheated oven, ready to be baked. Much like paint, you don’t want to touch the freshly applied powder. If you mess it up, you can clean up the part and start over. 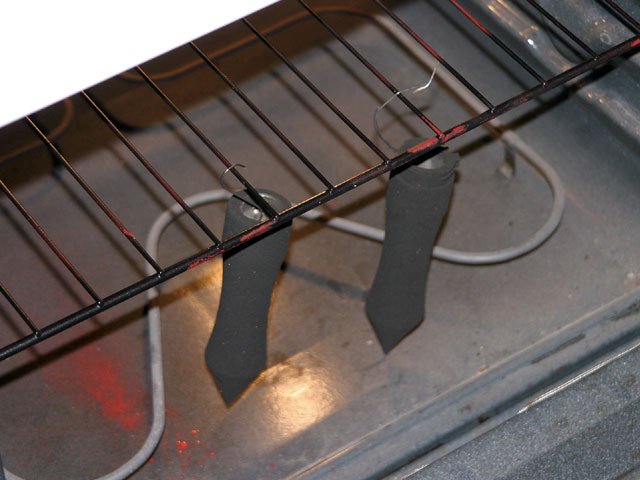 The other grip was coated and put into the oven. As you can see, the parts have a dry, matte finish after they are freshly coated. 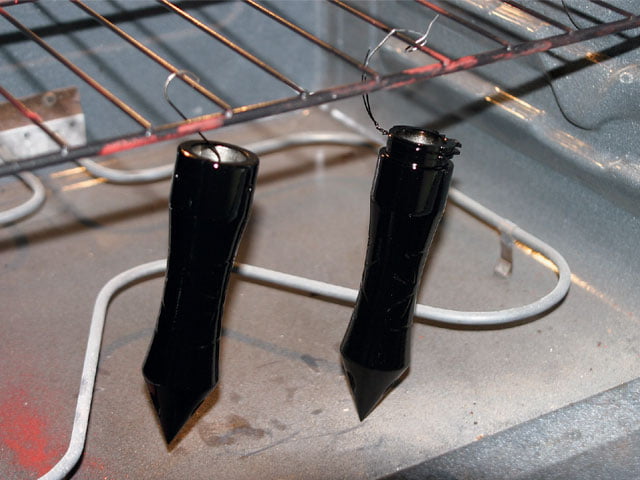 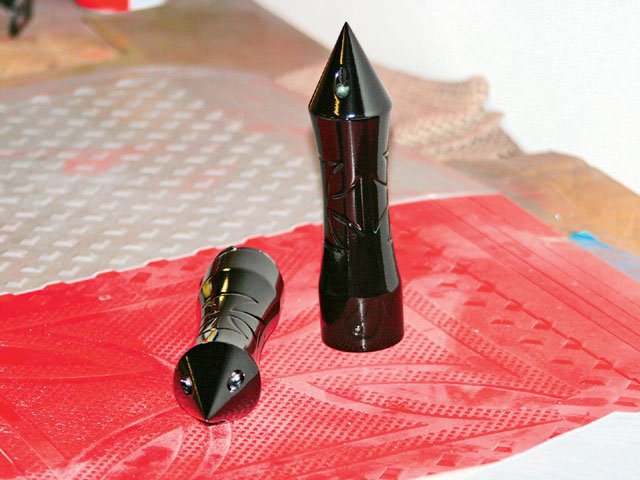 The wait was worth it, as the grips looked great. There’s no way to tell these grips were chrome less than an hour earlier.

For 21st-century motorcycle builders and manufacturers, powdercoating is the new chrome. Bikes from the last part of the 20th century were often shod in many pounds’ worth of shiny plating-it was all about bling. While the shiny stuff “that don’t get you home” is still popular in smaller doses, black and other colored coatings have gained in popularity. Look no further than H-D factory offerings such as the Night Train, Night Rod, and the Nightster to see some of the creative applications of powdercoat. In fact, the MOCO uses powdercoating for the clearcoat on its tanks and fenders, along with black for frames.

So what exactly is powdercoat? Unlike paint-based products that start life as a liquid, powdercoat is a dry, powder-like material consisting of plastic resins and pigment. Unlike chrome and paint processes, powdercoating is more environmentally friendly: no volatile solvents and no fume clouds. Powdercoating usually provides a more durable finish compared to paint-based coatings, with increased protection from the sun, corrosion, and chemicals. Coatings can be shiny or matte, similar to liquid coatings. Cure time is only 10-30 minutes, meaning the coated parts can be put to use almost immediately. It should be noted that while materials other than metal can and are powdercoated, metal is the most widely used material for this technique. You’ll see why later in this article.

As with chrome plating, powdercoating is an electrostatic process. In a nutshell, the positively charged powdercoat is attracted to and “stuck” to the negatively charged metal to be coated, then baked in an oven. This might sound complicated, requiring fancy, expensive specialty equipment. However, it’s a simple process facilitated by powdercoating guns that start in the 100-dollar range. Guns resemble hairdryers and are available in both electric and air-compressor-driven versions.

We paid a visit to Amir Yazdan’s garage to look at some of his own custom-built scoots and learned that he is a home powdercoater. He was frustrated by having to wait for parts to be powdercoated, along with the high costs involved with professional powdercoaters. After a little research, he found he was able to affordably powdercoat anything that could fit into his used, 50-dollar electric oven (check your local classifieds for free or cheap ovens). Do not use your mom’s, wife’s, or girlfriend’s oven-the resins leave behind toxins that should not be eaten. Even a small toaster oven can be used if the parts can fit inside. Sears sells a Craftsman powdercoating gun (about $160) that Amir has found to produce professional-looking results. Although some paint stores as well as Sears sell powdercoat, he’s found eBay to be a great source for supplies.

We showed up at Amir’s just in time for him to fire up the oven-bake at 400 degrees F. Take a look at how you can powdercoat with abandon, saving money and time for more parts to coat.