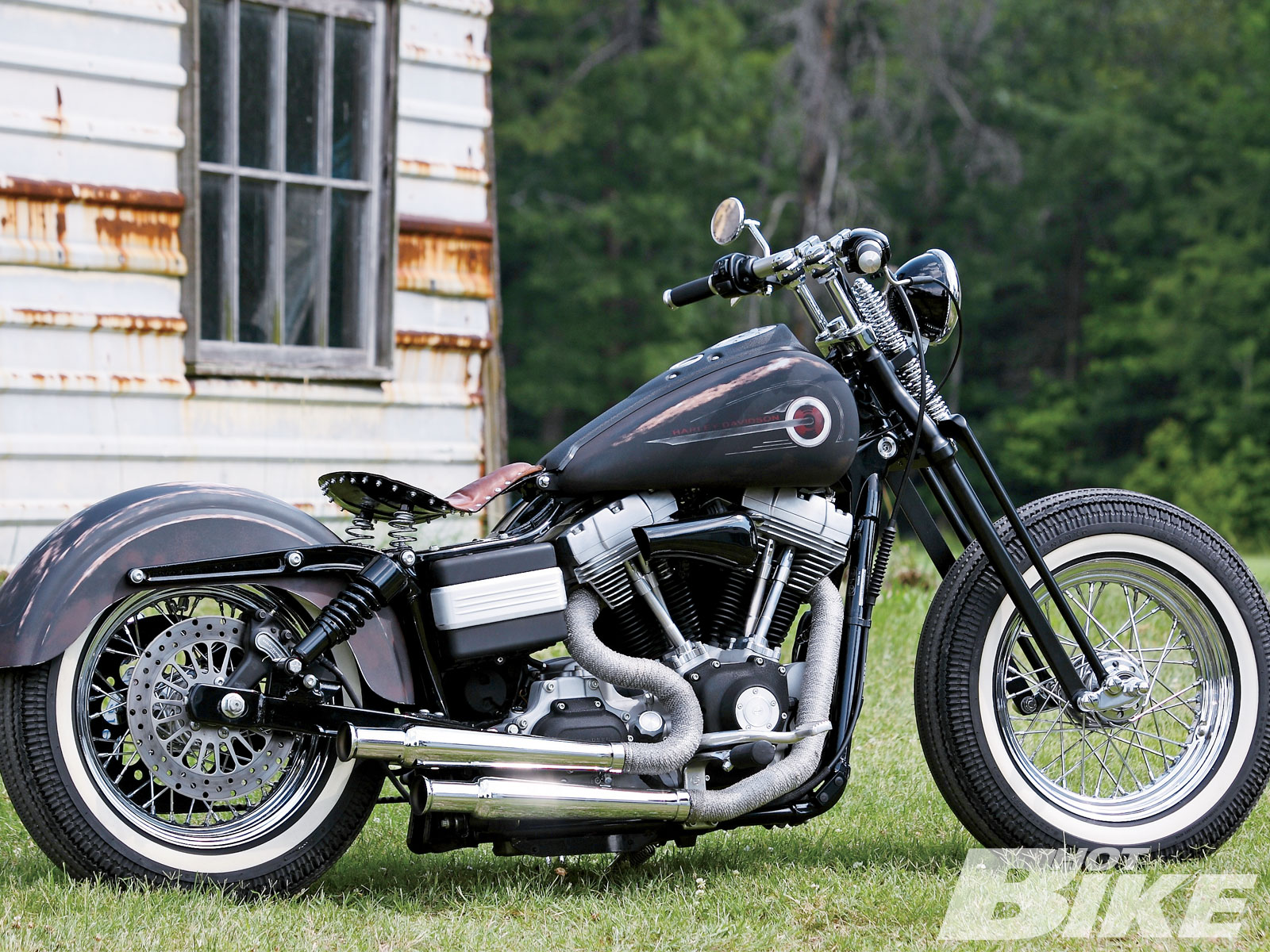 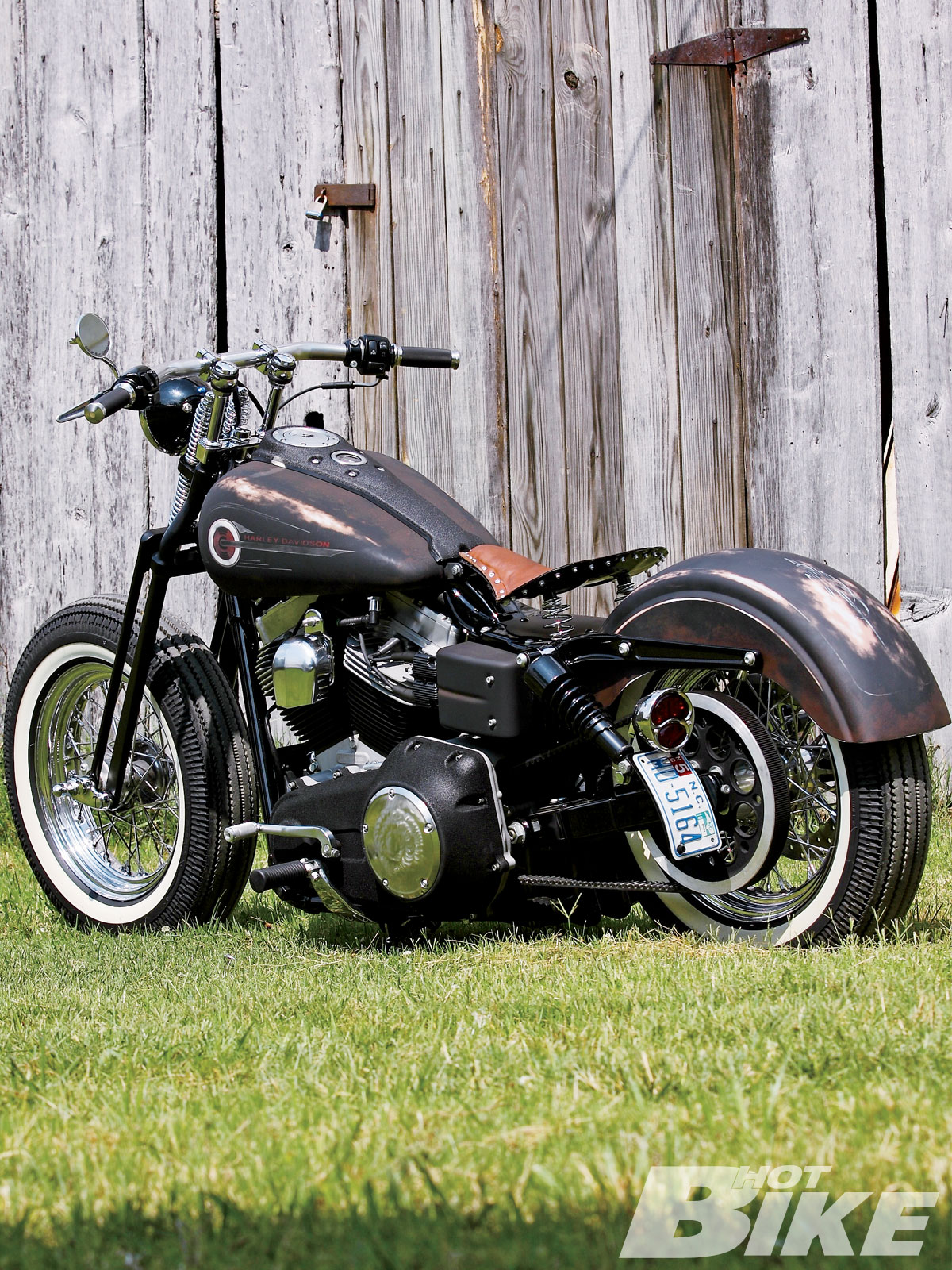 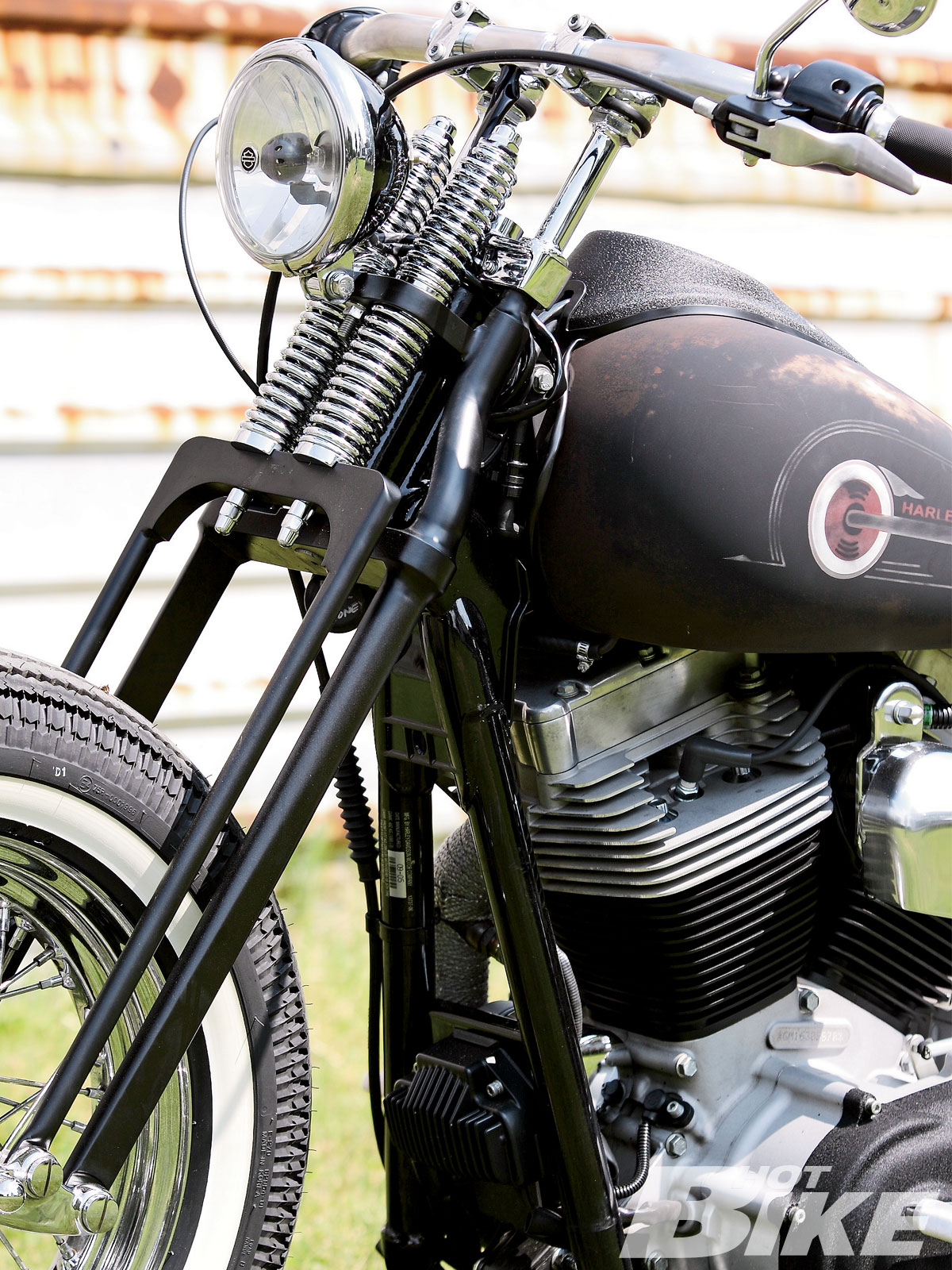 “I gave Stumpy, my one legged mechanic, the order to build the seat. I told him to throw it together, nothing too fancy, just something that fit with the ratty look.” 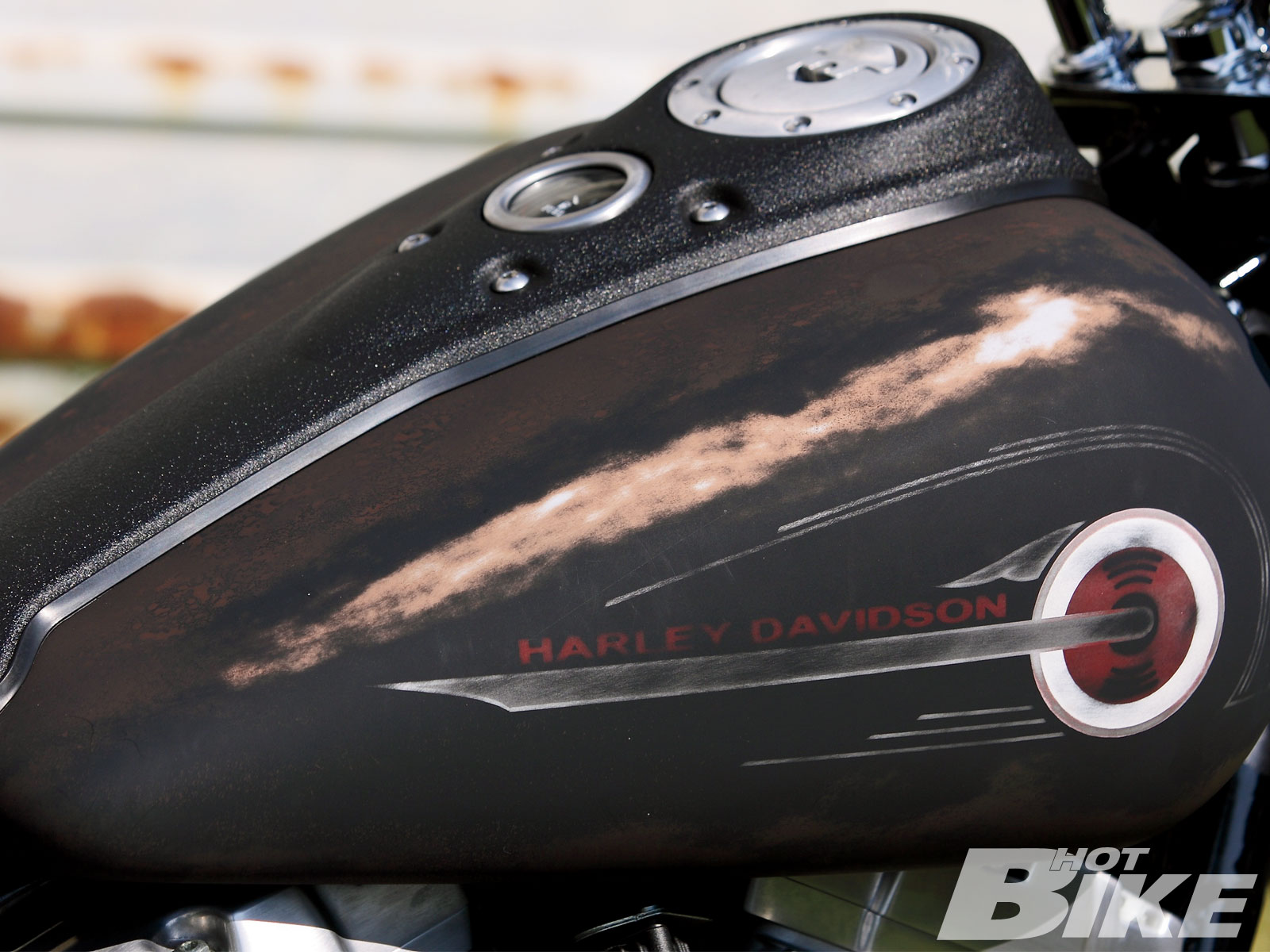 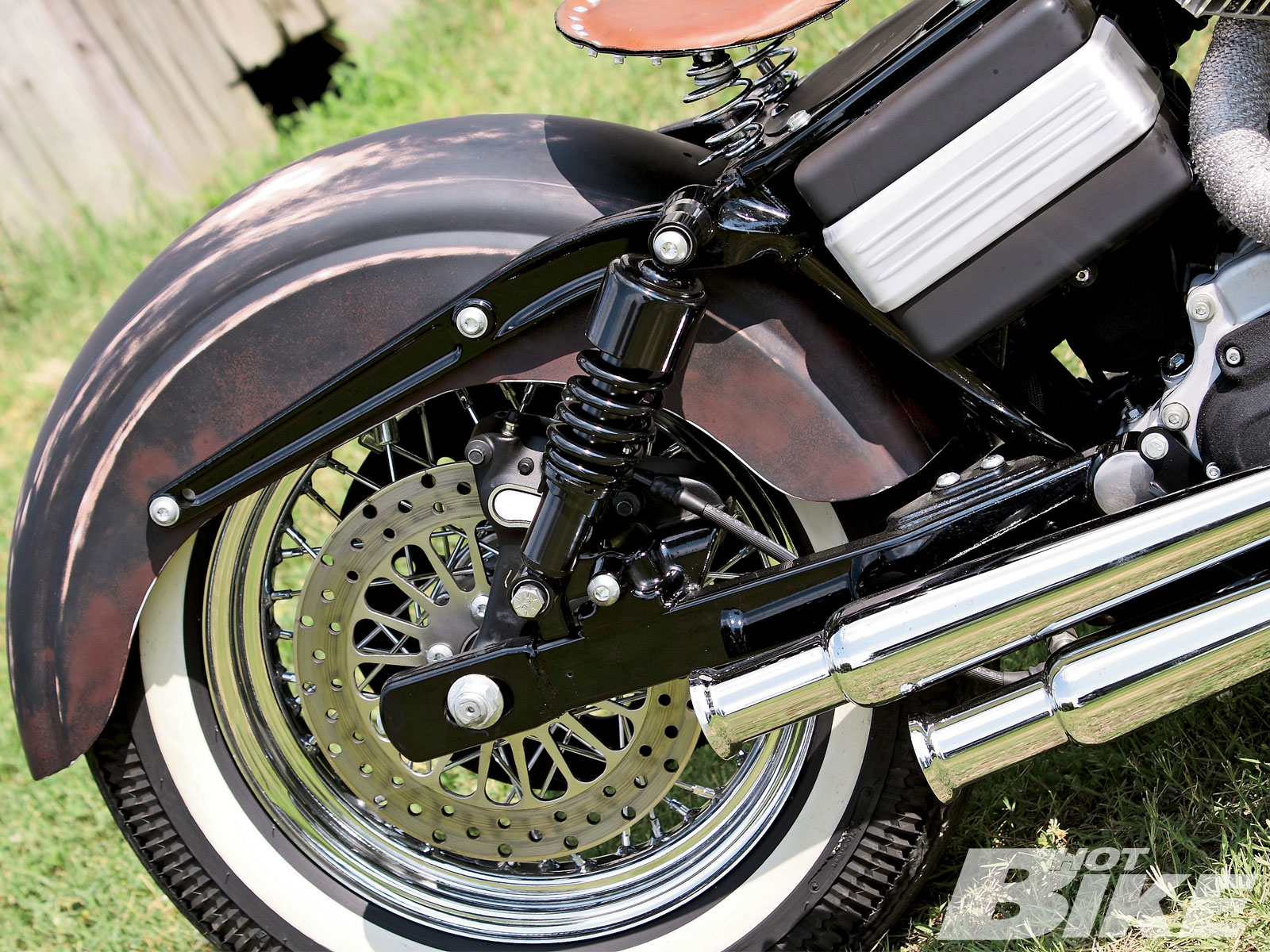 To get the rear of the bike to set right with the lowered front, SCC used a set of Burly Slammer Shocks with 1-inch lowering blocks. 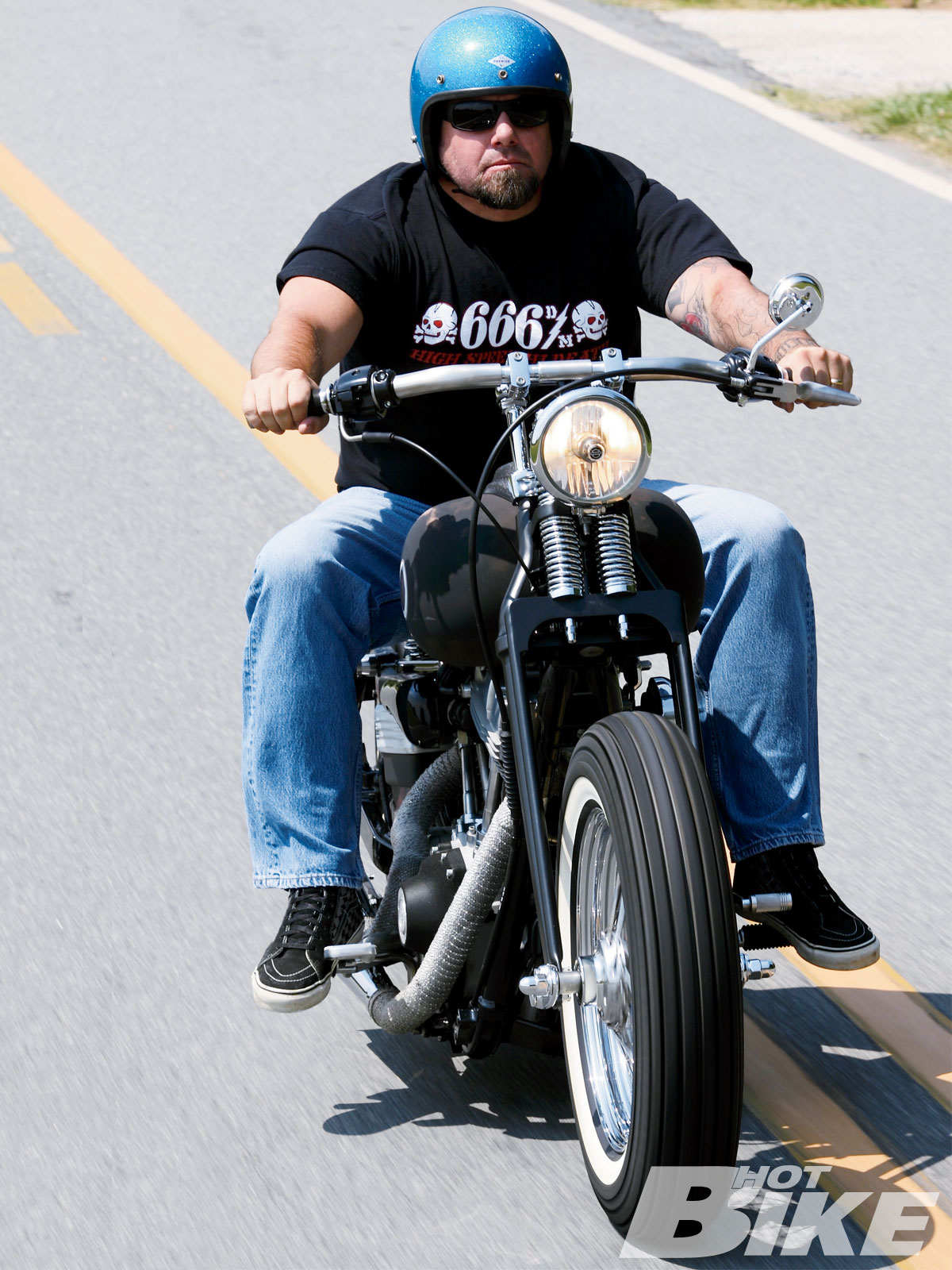 This bike was bone stock when we got it and it was draped in the ugliest red color that Harley ever put on a factory bike. I personally can’t leave anything alone, so a plan to build a Dyna bobber was rationalized. Scotty, who had just started at our shop was sitting with a clean lift. How better to test a new employee’s talent than to give him a fresh build.

Scotty jumped right on board with the idea and took no spare time tearing the bike down to the frame, transmission, and cases. We started out by powdercoating the jugs, primary cover, cam cover, and transmission side cover wrinkle black. The black jugs would be a characteristic of an older Harley to help blend the look that we were fashioning.

While Scotty was reassembling the motor, I made the decision to install the dusty 2-inch-under springer that had been lying in the corner of the shop for quite some time. The wheels were pulled from our stockpile of factory takeoffs and the tires were sourced from Midwest Motorcycle supply. The look of the bike was now taking shape.

Originally we were going to use a set of Flanders Bars flipped upside down, but the ride and comfort would be sacrificed. I knew I wanted this bike to be comfortable to ride, so I decided on a set of oversized drag bars matched with a set of Paughco dog bone risers. The seating position turned out to be much more comfortable, except we still had to make the seat.

I gave Stumpy, my one-legged mechanic, the order to build the seat. I told him to throw it together; nothing too fancy, just something that fit with the ratty look. We ended up with a killer sprung seat with a custom frame cover to hide the wiring underneath.

Scotty wanted to make the pipes, and I’d be damned if I was going to put some off-the-shelf pipes on it. I chose the mufflers and the header wrap, and Scotty made the bends. We made the exhaust equal length for performance and sound, and it sounds killer!

While all this hoopla was going on, Chris and Jay of Fox Custom Paint were busy filling the rear fender and prepping the bodywork for paint at their shop. I asked Chris to design a logo that had a retro feel to it, yet looked as if it could be a future concept logo for the boys in Milwaukee. Chris took an early Harley logo and used it to sketch out a new logo. Chris laid down numerous coats of primer and base before spending hours sanding back through to achieve the faux patina look. This paintjob really makes the entire bike.

Once all the bodywork was back, it was a full day’s worth of finishing touches. We reassembled the bike and took it for its maiden voyage over to the local Harley dealer to get it remapped. Along the way, a very nice county Mountie pulled Scotty over for speeding with no speedo.

The bike got remapped and it ran great. It wasn’t up on our website for long before its new owner from Dayton, Ohio, snatched it up. Our idea of a bobber Dyna was complete and the fast sale attributes to the uniqueness of the bike in a sea of blah motorcycles out there. It also proves that you don’t have to spend an arm and a leg to get a killer bike.