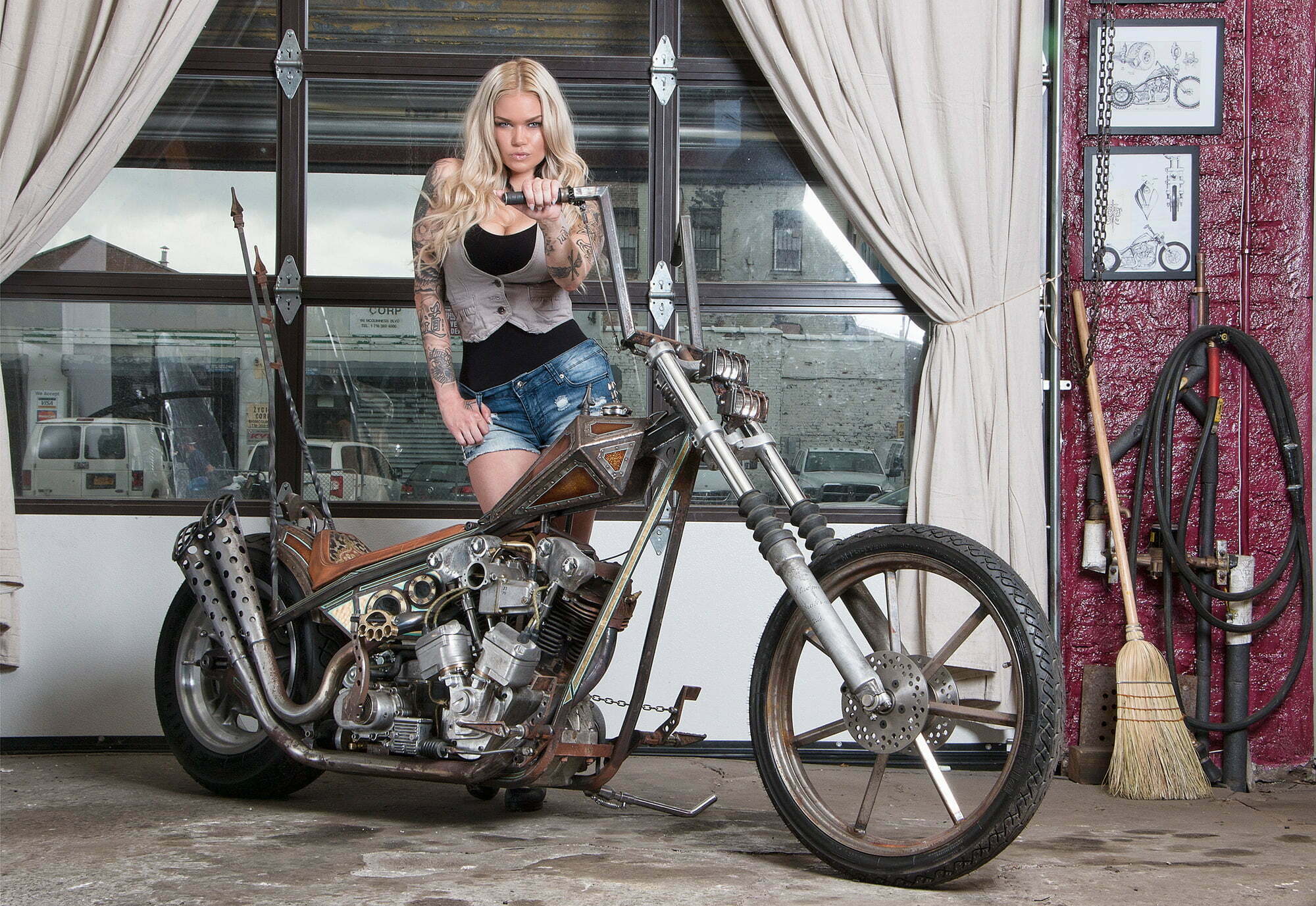 Steampunk is a type of sci-fi that blends history, fantasy, and Industrial Age looks. I’ve been a fan of it ever since I watched old reruns as a child. Paul Cox got into his head to apply the steampunk look to a chopper. The end result is this badass iron beauty right here. Below is what he had to say about transforming this metal into a masterpiece. 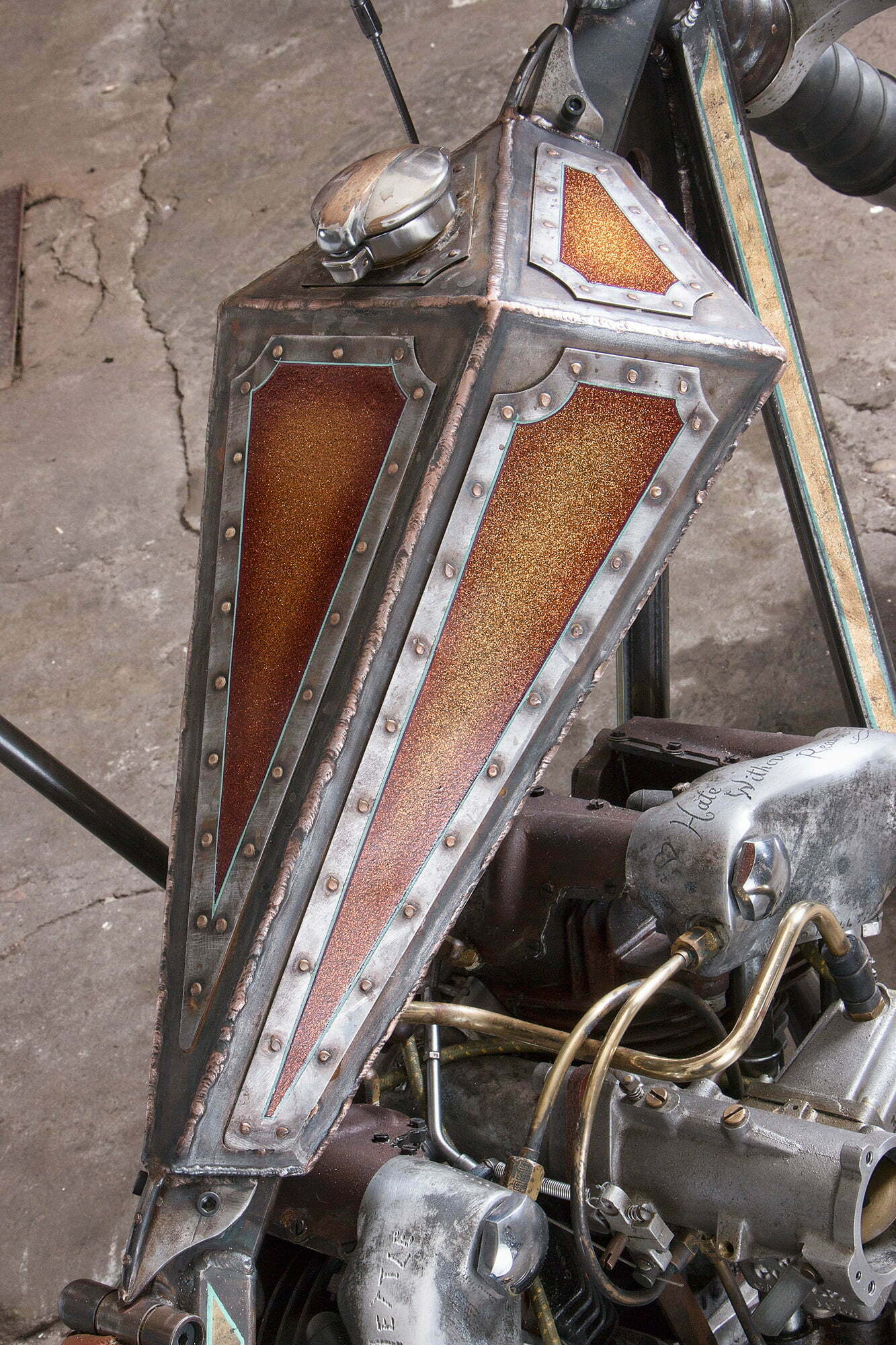 The original inspiration for the bike was a painting by Mitch Cotie. I’ve been a big fan of Mitch’s work for many years, so I was excited when my customer came to me a while ago in Sturgis with Mitch’s artwork on a scrap of paper and some notes scribbled on the back. The plan was to build something inspired by fantasy that could be ridden daily, hard, and fast.
The bike would live in California instead of NYC, so I wasn’t as concerned about length and rake as I usually would be. Even so, the starting point was the frame. We wanted some stretch in the neck and about 40 degrees rake, but the main mission was making the entire frame from square tubing, all bent on the sectional diagonal. I looked for diagonal square dies for my bender with no luck, so I made my own. I use an old homemade hydraulic bender mounted to an I-beam on wheels that was originally used for building NASCAR chassis in South Carolina. 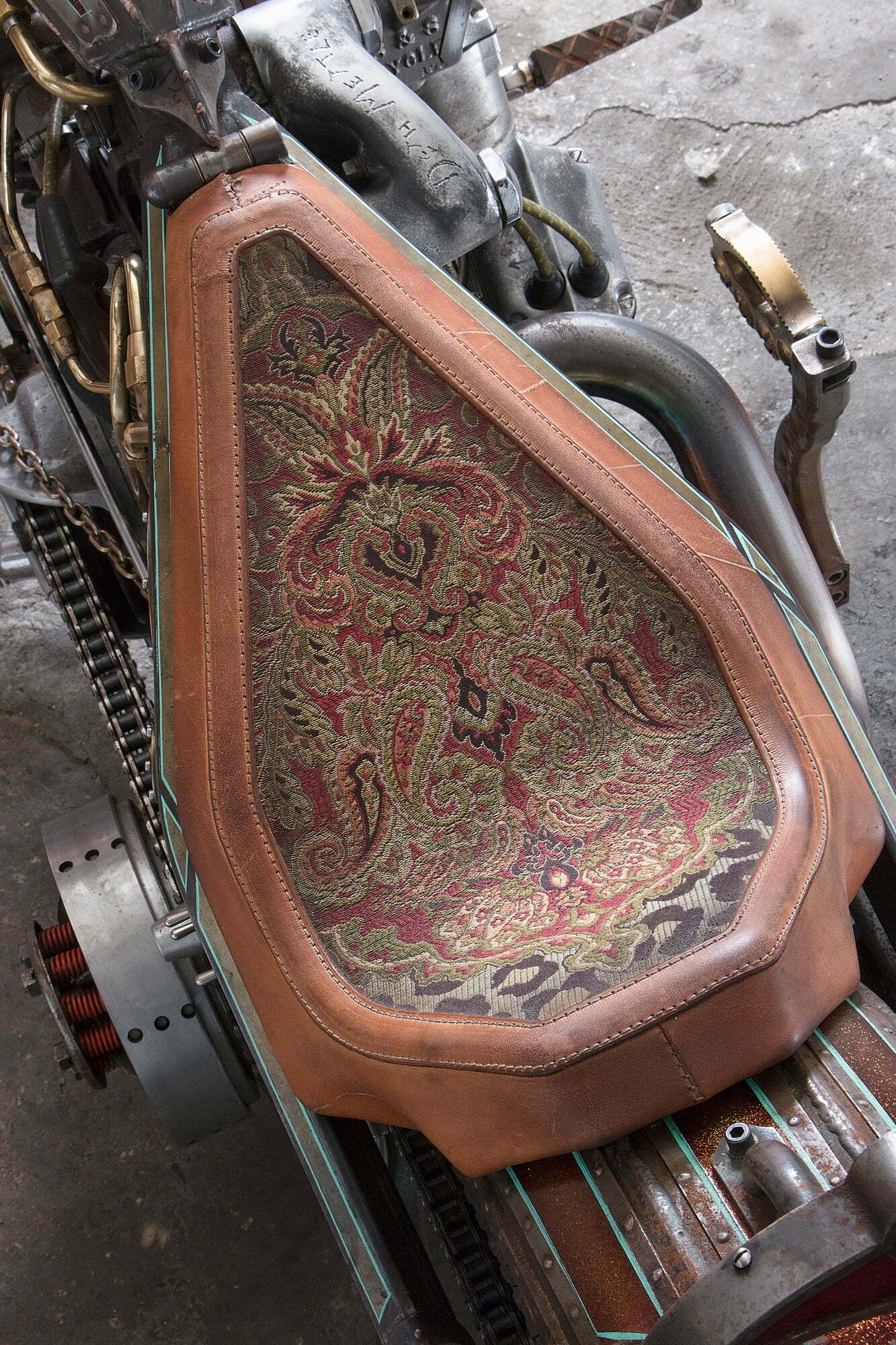 The engine was something I had wanted to do for some time. I wanted to build a real Alternator Knuckle with a Shovel bottom end and Knuckle heads, so I made a list of parts and ideas and called up S&S for what I needed. I spent some time going over my lists and ideas with their sales and tech guys. It’s a configuration that can get a little tricky when it comes to top-end oil return, lifter and cam configuration, breathing, etc. Some of the S&S team seemed pretty interested in what I was doing with the engine. Coincidentally, about six months later, S&S debuted its Kone-Knuckle at the V-Twin Expo dealer show.
I decided to use a dual magneto setup from the infamous Morris Magneto, so I definitely wanted it to serve a dual purpose and not just be for show. This inspired me to dual plug the Knuckleheads. I hadn’t seen many dual-plugged Knuckles, so I just had to figure it out on my own. I made my own fixture for the mill and did the work. Everything lined up and cleared well with no interference. Now the dual magneto fires each set of plugs separately for full mixture burn in the chamber. It works great. Topping the magnetos is a pair of original Goodson ridged aluminum mag caps. Goodson himself made these up personally for this project. He was great to work with again. His parts, like so many, have been knocked off repeatedly but he keeps on getting it done, the old way. The bike’s plug leads are classic braided fabric of solid copper core. 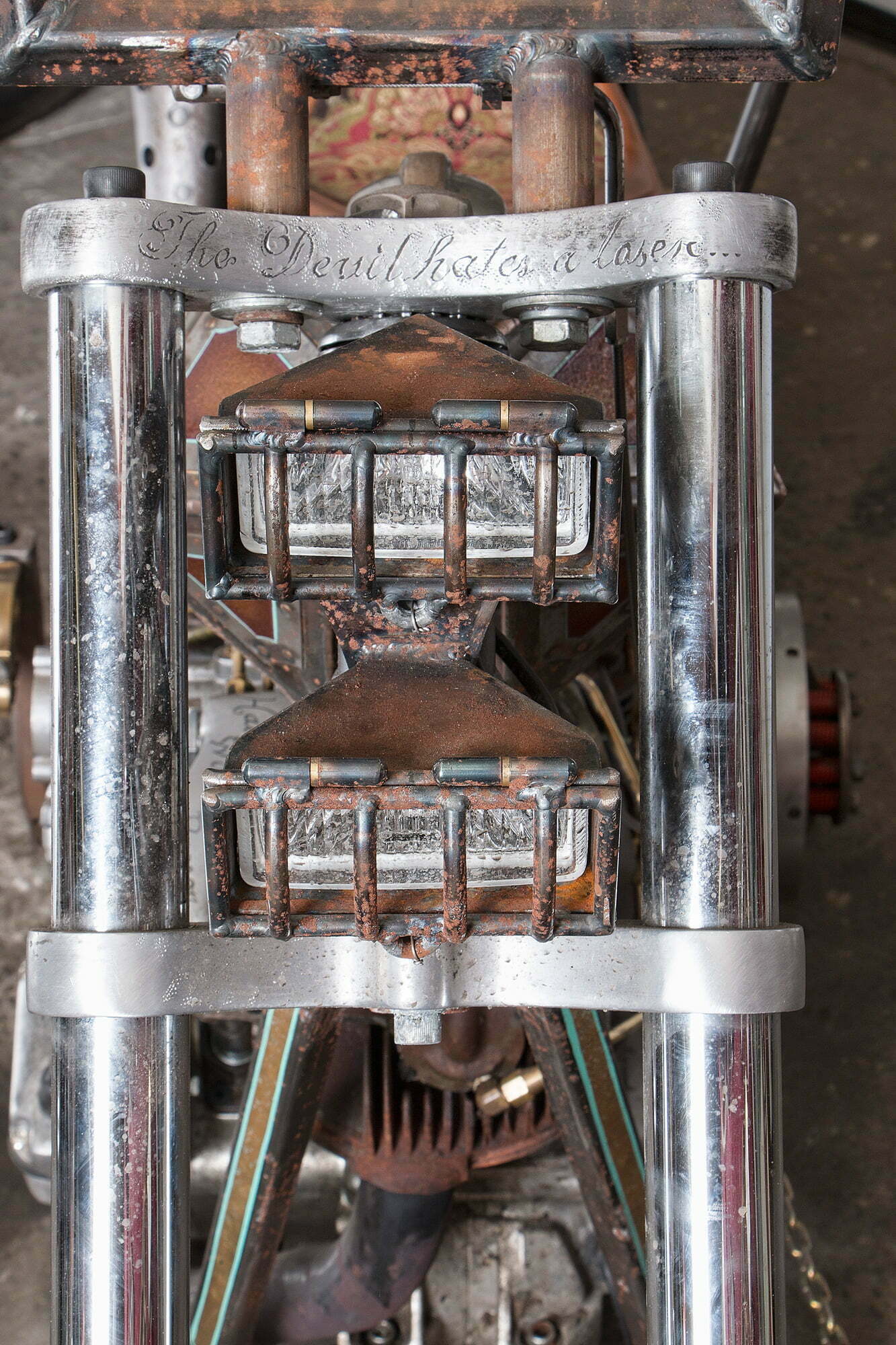 My signature four-speed open chain drive setup connects the engine to the Baker 6-into-4 transmission. Bakers are bulletproof; there was no question I’d use a Baker here. The hand shifter is mounted high on the top motor mount, and the mechanical clutch is activated by the handmade foot controls. The kicker arm and knuckle pedal are by a sweetheart of a guy, Fab Kevin.
The exhaust pipes were also inspired by some of Mitch’s artwork as they come back and up into tapered cones that were rolled, drilled, and edged with rod to finish just past the fender.
The sheet metal is all hand-hammered steel with silicone bronze. I made the fuel tank in a prism-style with a Monza flip-top cap. I built it with overlaid steel insets for added dimension. The oil tank is built the same way and includes port holes of borosilicate glass discs and machined brass bezels. All oil and fuel lines are thick-wall brass tubing and brass fittings. The whole bike is about hard edges and heavy geometry, so the dramatic bends in all the tubing added to this effect. The rear fender is made up of five flat facets set on a curve. Plus inset panels. The taillight is something I made from sheet metal and then machined the lens on the mill. The sissy bar is twisted up from square steel and bracketed to the frame and fender. I topped the rail with gate finials from a local iron shop. 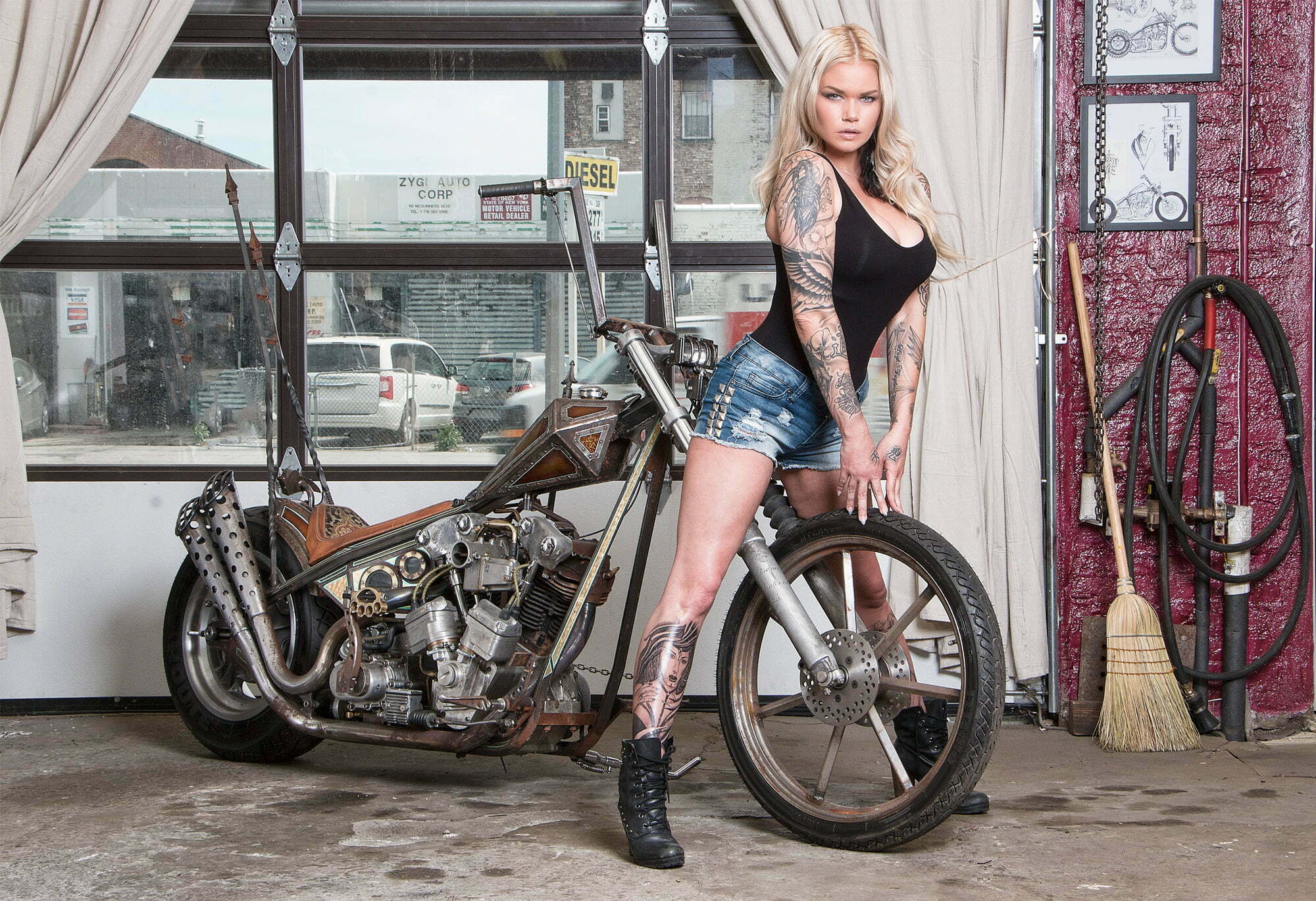 The forks started out as an early, tapered-leg Wide Glide. I shaved the fender mounts and installed longer tubes. The triple trees are narrowed 41mm trees from Bare Knuckle Choppers. The headlights are in handmade steel prism-shaped shells with pivoting steel cages. I made the handlebars from more 1-inch square tubing and built in the risers. Another special piece is the bevel gear throttle. I made it to keep the same feel and geometry as a standard throttle yet work with external gears and linkages. The movement is carried down to the bottom of the bars through rods and bell cranks then to a cable, which actuates the rebuilt vintage S&S “L” carb. 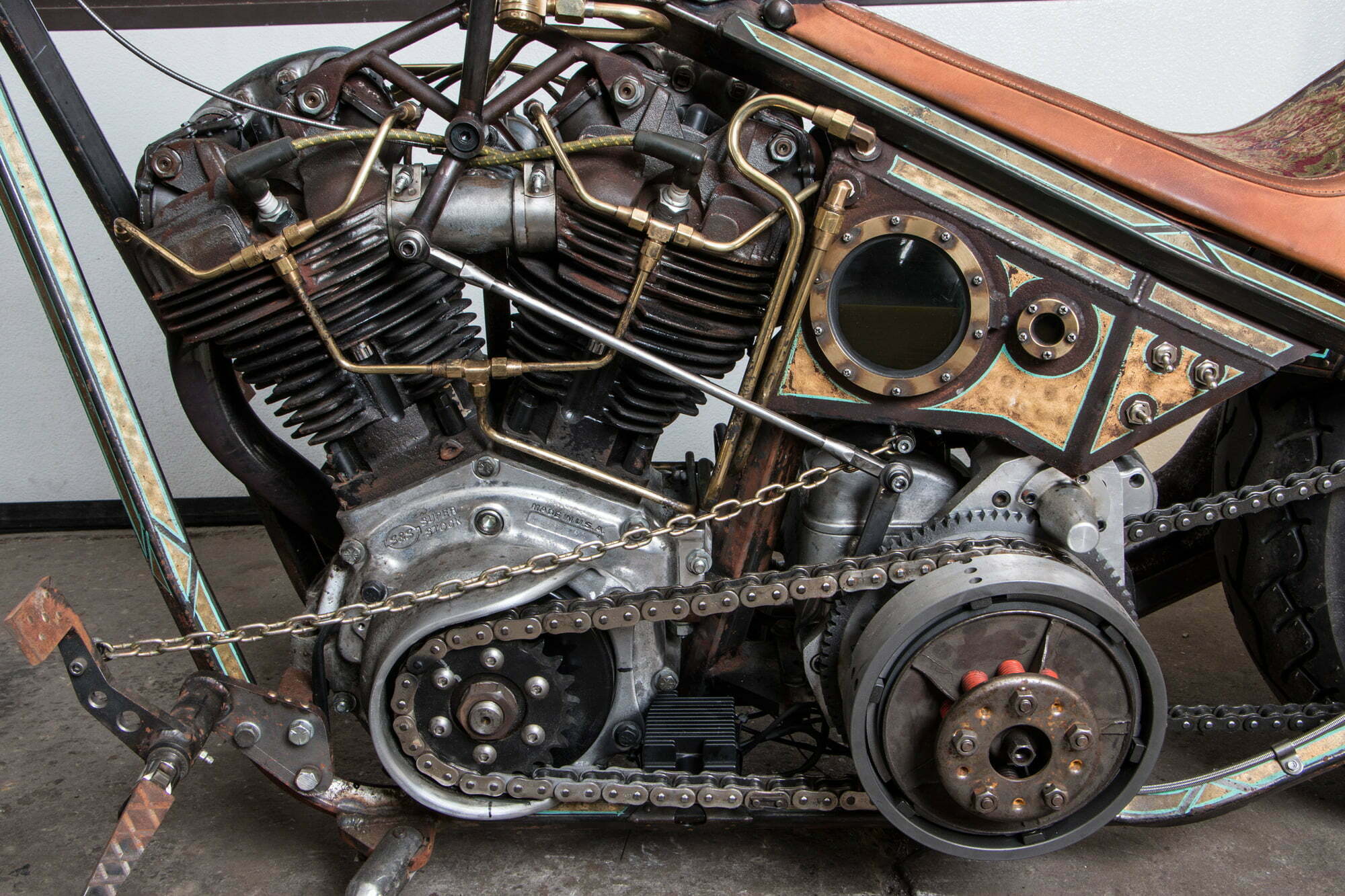 The wheels were an adventure too. The front wheel was built by one of the original Invader wheel makers for more than 40 years, Scotty’s Invaders. He made up a narrow, dual disc, seven-spoke wheel that came out great. He’s a really good guy to work with and experienced in making any configuration you might want. The rear wheel originally came from Real Rodders Wheels in California. I was interested in doing something based on a Halibrand kidney bean-style wheel, and these guys make the wheel I was looking for. When I called, they had just machined a set in the size I needed but hadn’t drilled them for an automotive lug pattern yet. That was perfect for me because it left me with a solid aluminum center to build my own bolt flanges and axle bearing setup. I designed a system that would include the inboard-mounted brake rotor with carrier and an outboard sprocket, all on the left side in the dish of the wheel. I made the disc and sprocket spacers to bolt up individually to the hub to maintain strength, and all parts are centered on stepped internal flanges.
I did the paint and engraving to contrast with the natural finishes that are oxidized and sanded to achieve the look I wanted. The steel is blackened and then flaked, kandied, gold leafed, and pinstriped in sections. I didn’t want to leave just a raw, unaffected finish that looked unfinished and amateur. There’s way too much of that going around these days, so I wanted to balance a mix of high finish and aggressive rawness–the engraving contests of quotes from the owner, symbols, slogans, and passages from the that happens to always be lying around the shop. The seat is also a bit of a fun departure. I like mixing materials and challenging myself to try new things. I wanted to use a romantic tapestry and searched until I found a vintage pattern that was perfect. I backed the heavy tapestry with pigskin so it would have the same strength as the leather around the sides. The seat is built up on my signature Rigidaire air ride system for a softer ride in that rigid frame. 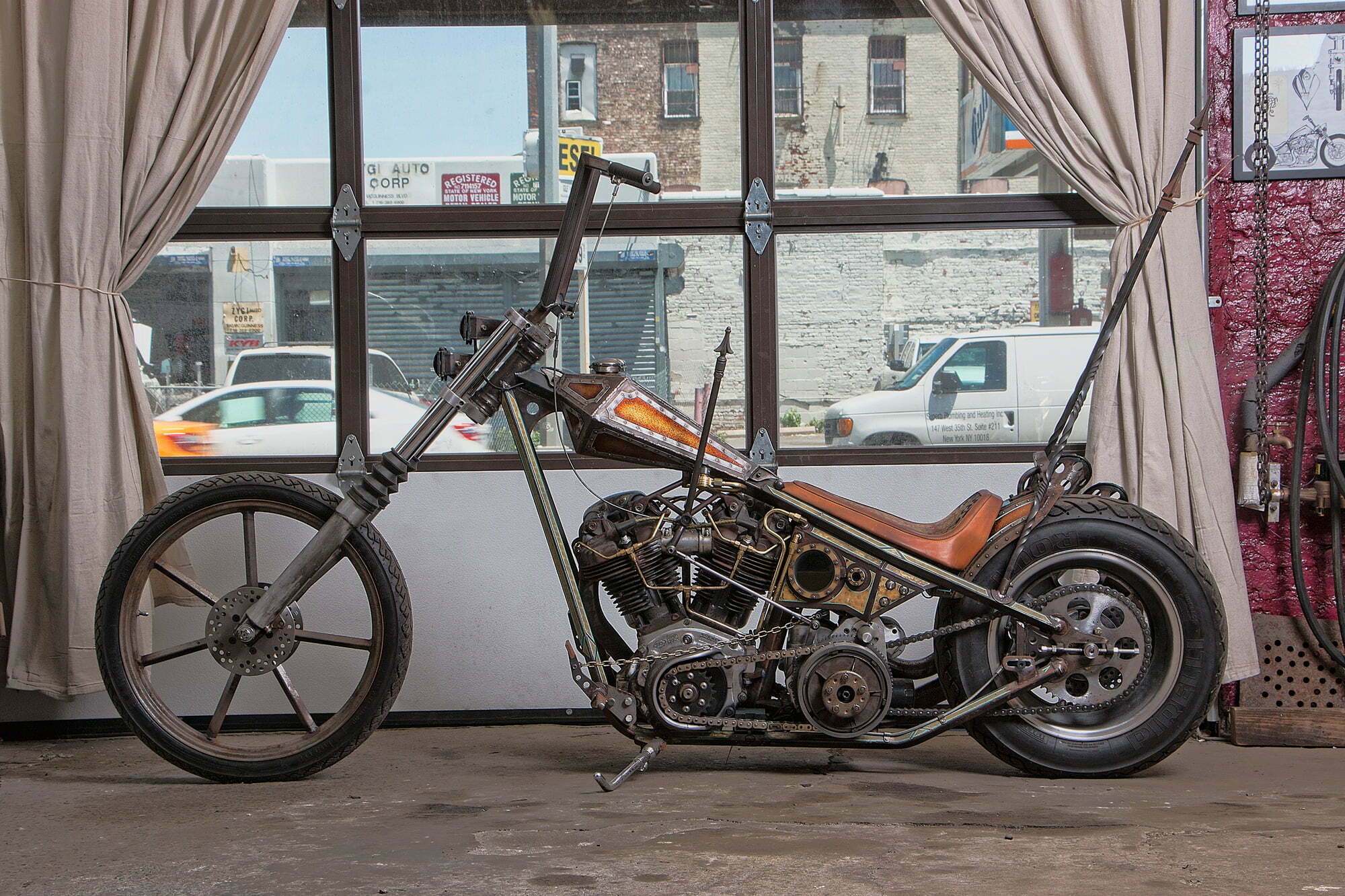 There are a few more secret gizmos known only to the owner and me, and it’s probably best to keep it that way. This Chopper, “Deth Mettle,” represents a few years of my life and is now across the country, cruising the highways of California. I hope it lives a long, happy life, and maybe we’ll see each other again one of these days. 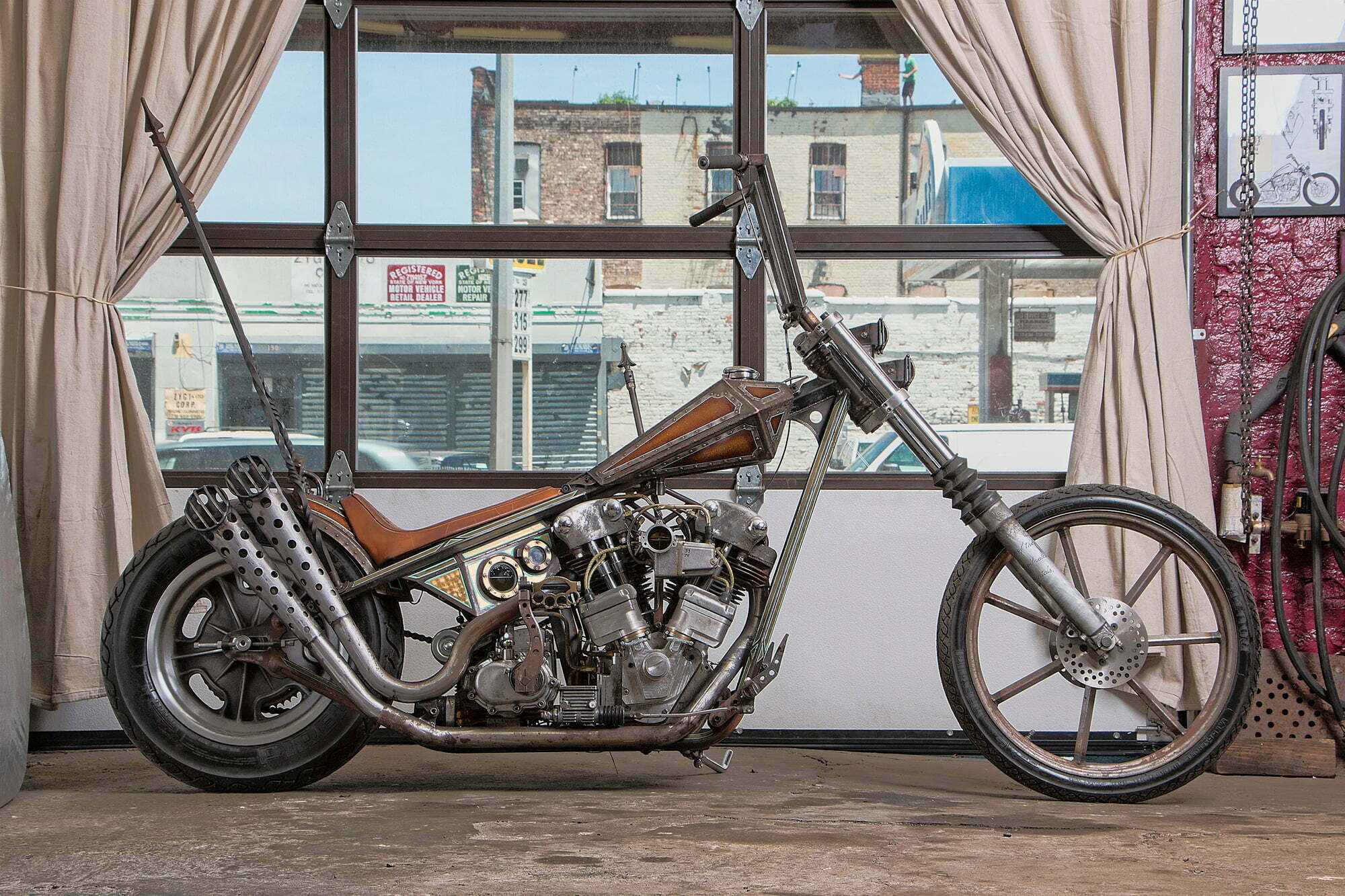 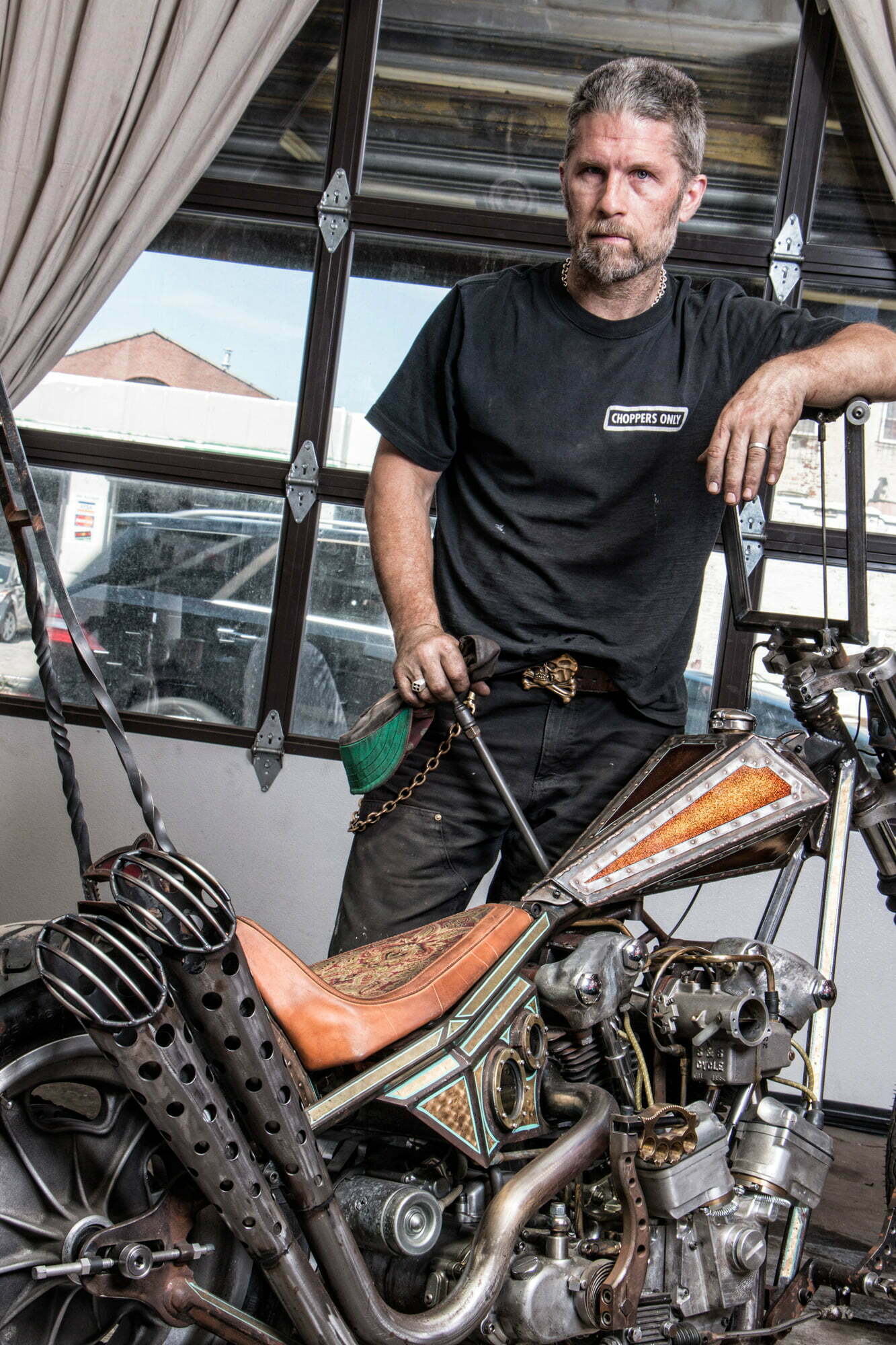