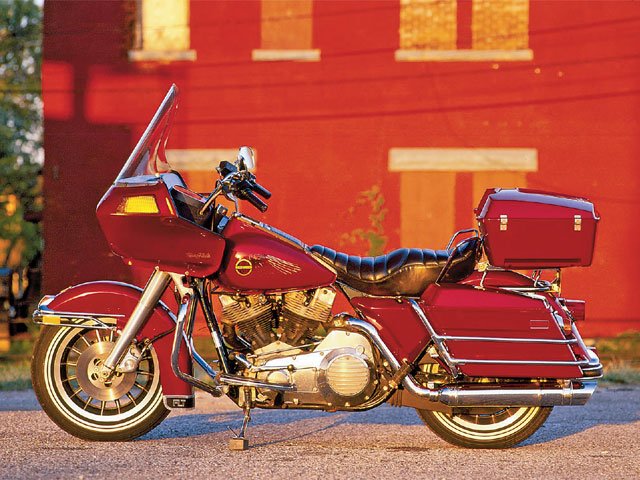 One of the earliest and cleverest heralds of the forthcoming revolution at the Motor Company is the rubber-mount chassis used on all five-speed dressers for the last quarter-century. This ’80 shovelhead arguably benefited most from the quantum leap in vibration control, precise steering, and superior handling for a touring-class motorcycle when the design was new (a ballsy move for a company that was on its knees back in 1980.) Like the Motor Company, this chassis has gone from strength to strength since then, yet has never been quite perfect. (Photo: Courtesy Wolfgang Publications) 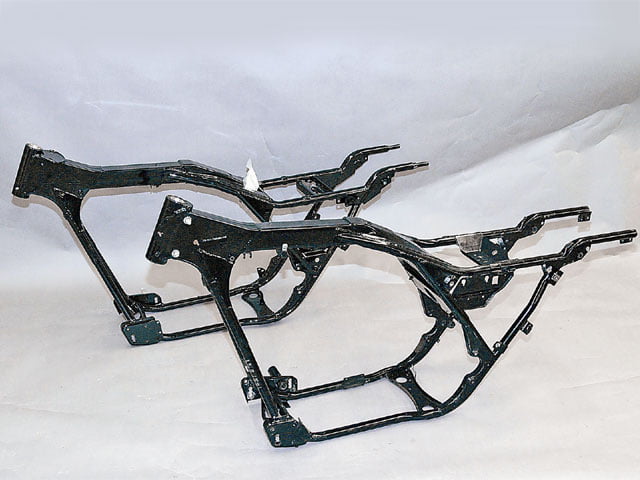 There’s a big age difference between these two frames, but you’d hardly know it by looking at them. The younger of the two, in the background, could date anywhere from 1996 to the present, and the elder pretty much from ’95 on back to the origin of the species. The basics: massive boxed-in steering head, stiff (but not straight) square-tube spine, double downtubes, decent rigidity from triangulation, and (of course) provisions for a swingarm mounted to the powertrain are common to them all. We’ll get into some details of this peculiar engine/chassis relationship and how to improve on its accuracy, stability, and performance next time. (Photo: Courtesy Wolfgang Publications} 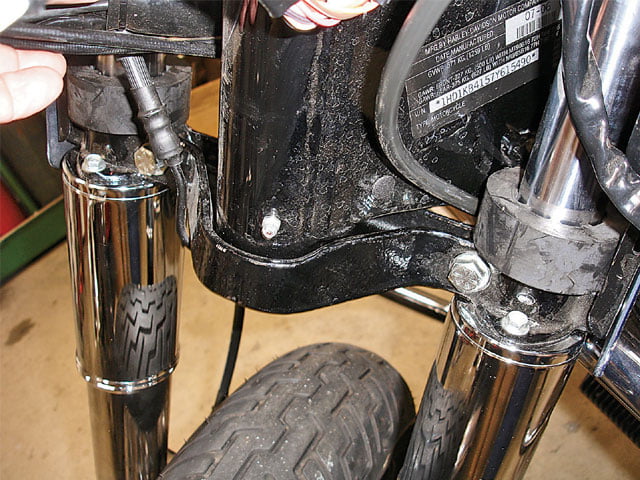 In addition to the basic virtues of this peculiar frame, there’s this to add to the chassis’ ensemble: a set of unique backward triple-trees, the lower of which is shown here. By pulling the mass of the fork (and any attachments) behind the normal pivot axis and toward the middle of the motorcycle, a pendulum effect is produced that makes for very light steering, good centering, and surprising stability, considering the rake and trail numbers on bagger fork geometry. It’s interesting that, unlike other models in H-D’s lineup, there are no options to this geometry, as with Softails, Dynas, and (once upon a time) FXRs. 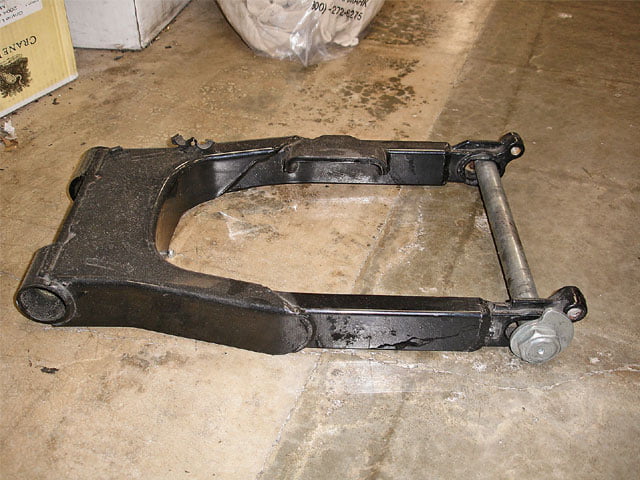 Holding up its end of the deal at the opposite end is the swingarm. Over the years, this crucial component has evolved considerably. Today, it is a much stiffer, stronger piece than it was prior to 2002. The pivotal components that live inside have changed as well, from so-called Cleveblocs to genuine bearings. It’s also worth remembering that, unlike virtually any other existing motorcycle chassis, this whole kit and kaboodle mounts to the rear end of the transmission casting rather than the frame itself. 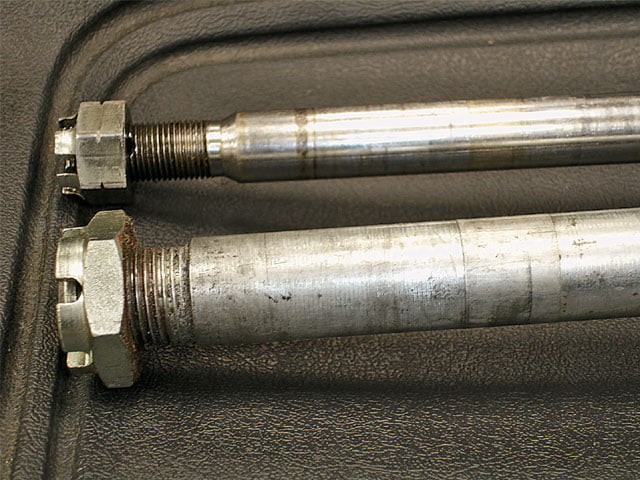 Axles and pivot shafts have altered a bunch since 1980, too. Most folks know that the diameter of the axles went from 3/4 to 1 inch in 2000, but the benefit is less known. That increase makes for axles that are twice as stiff-particularly when combined with improved clamping at the swingarm and forks. The whole drill is intended to eliminate flex at both ends, so you don’t feel as if there’s a hinge in the middle of the frame. Mostly, it achieves just that! But wait-there’s more than meets the eye…as we will see next time.

Reagan was President, Lennon was alive, Post-It Notes were introduced, and Harley got its tariff protection (lots of 700cc bikes magically appeared out of Japan), yet built only about 30,000 machines of its own.

Guess what? The frame in brand-spankin’-new ’07 dressers, from Road Kings to Ultras, dates back to 1980. That’s beyond old, even downright archaic in the natural order of a mechanical lifespan. It’s ironic that this most successful H-D chassis is now the longest-lived, since virtually every other chassis the factory uses has been redone (twice in the Sportster’s case) since this one hit the streets. Not that this necessarily proves the thing is past its sell-by date. Truth is, it’s more a testimony to just how advanced the so-called FLT frame was…and still is.

The rubber-mounted dresser chassis had its stellar debut during the shovelhead era. At the time it was flat-out brilliant, since it cured vibration, had deceptively light steering (thanks in part to backward triple-trees), and both ride quality and cornering were a measure of magnitude superior to anything that had come from Milwaukee in the past. In short, a generation before the Road King, this chassis made those elderly Big Twins kings of the road. Four years later, after the introduction of the FXR and the Evolution engine, the knowledgeable few were telling everyone remotely interested in V-Twin touring that this was the way to go. That’s still the truth today, almost three decades later, Twin Cam engine and all. But cosseting three generations of powerplants (or three and a half, if you count the latest 96-inch engine as “new”) has taken its toll and revealed some flaws, mostly due to the ever-increasing power in those powerplants. A shovel making 45-55 ponies doesn’t threaten a chassis’ integrity, no matter how hard you try. Even hopped-up Evolution engines were rarely in the 80-90hp range in touring tune, so the FLT frame and suspension remained safe in both senses of the word. Then came the Twin Cam and the aftermarket elephant-engine era with 100-plus horsepower available for the asking, and we’ve approached, if not crossed, the threshold of what this venerable chassis can stand. Sadly, there are probably no statistics showing what effect increases in power levels have on rubber-mount models, much less how many of us use how much of what’s there. Be that as it may, gut checks say it’s getting close to (if you’ll pardon the analogy) critical mass. We don’t mean the mass it carries, either. Gross vehicle load ratings, where the loads are located on the scooter, tires, wheels, air suspension, and learning-curve rider ignorance regarding prudent use of same have been relatively constant throughout the FLT’s forgiving history. No, the emergence of shortcomings is mostly down to the aforementioned injections of power, mostly massive torque, and the nature of (increased) mass production. No matter how good the QC, building ever greater quantities of a labor-intensive chassis leads to the potential for production variances.

Don’t get us wrong-the majority of rubber-mount riders do not (on a daily basis) even come close to finding the FLT’s limits. It’s just that when and if they try, on that rare occasion they might learn the hard way that yanking the wire under certain circumstances can have unexpected and unwarranted results.

The Motor Company is in an awkward position here, pretty much the victim of its own success while aligned with the boon of a boomer demographic that’s migrating like lemmings onto a sea of baggers. We suppose that (from H-D’s perspective) dealing with a major revamp of a bestseller is a lot like trying to wash your tightie whities while you’re still in ’em! Doable, but not something you’d choose if there was any alternative, meaning an all-new touring chassis is evidently still not on the horizon. All the same, over the last few years H-D has diligently laundered the existing platform as much as it can with new axles and clamping, different fork internals, swingarms and bushings for same, and so on. So the basic frame remains the same, and as good as it is and always was, there’s still plenty of room for improvement.

Here we’ve listed some of the basic changes to the FLT chassis since its inception.

1980-Based on basic patents by engineers such as Erik Buell and others, the era of vibration-controlling Harley-Davidson chassis begins.

1984-Brakes are redesigned, and the Evolution engine is added to the chassis, creating a total package that combines the best reliability, comfort, and sheer ridabilty ever offered by the factory.

1985-Chains are out, beltdrives are in. A damn good touring scooter becomes a great one, with the addition of adjustable air suspension at both ends.

1986-The troublesome three-piece swingarm pivot is tossed in favor of a one-piece shaft.

1987-Baggers without fairings are introduced in the form of the FLHS (Sport). Customers yawn (until 1994), and the bike never sells well.

1993-The oil tank is turned into a sump under the tranny, and the battery is relocated from behind the right saddlebag to under the seat. Better ergos and a lowered center of gravity, not to mention convenience and bigger bags, are just some of the benefits.

1994-The other fairing-less bagger arrives! Road Kings are so popular that the waiting list is initially two-plus years long, and its sustained demand is the opposite of the poor FLHS in appeal. (Amazing what putting a speedo on top of a gas tank instead of an ugly nacelle will do.)

1996-At last, one more refinement long overdue, as FLHT inner fairings become less cumbersome and a lot more integrated and simpler to deal with.

1999-The Twin Cam engine shows up, the third Big Twin engine to grace the tubes of this venerable frame package.

2000-A bigger axle shows up on frontends to improve torsional rigidity in forks as the increased torque of 88ci (and in some cases much larger) engines makes its presence known and reveals hitherto unimportant and largely unnoticed imperfections in the FLT chassis.

2002-Bigger axles in the back, much stouter swingarms, and honest-to-God bearings to pivot on! Fairing-equipped bikes get a dual-damper arrangement in the forks as well, with a rod with holes (as ever) on one side, and on the other a cartridge (as everyone else). EFI was updated from the original Magneti-Marelli system to the Delphi type.

2005-The hybrid fork damping goes away in favor of control valves, which look very familiar to those who have ever messed around with Race Tech’s valve-damping concepts.

2007-The chassis takes on yet another engine…sorta. There’s no doubt the new 96ci TC engine has more torque, if no more real power delivered than the 88-inchers did. The real question is: Can the tried and true FLT chassis stand yet another extra burden? We think so!

Next time we’ll get into the things you can do, which, when added to the tweaks the factory has already performed, will tame the remaining quirks in your bagger’s road manners.