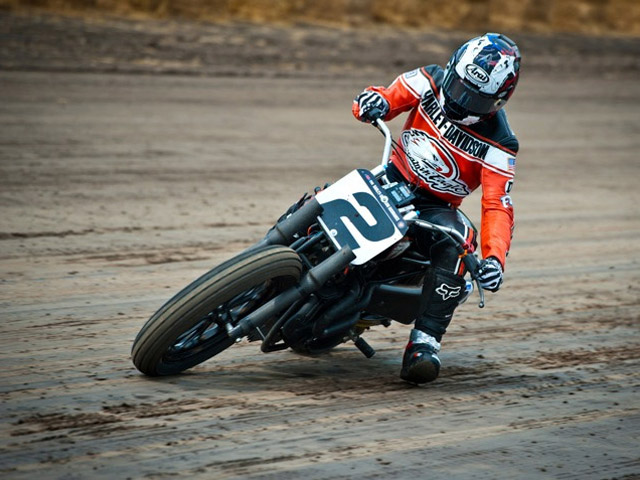 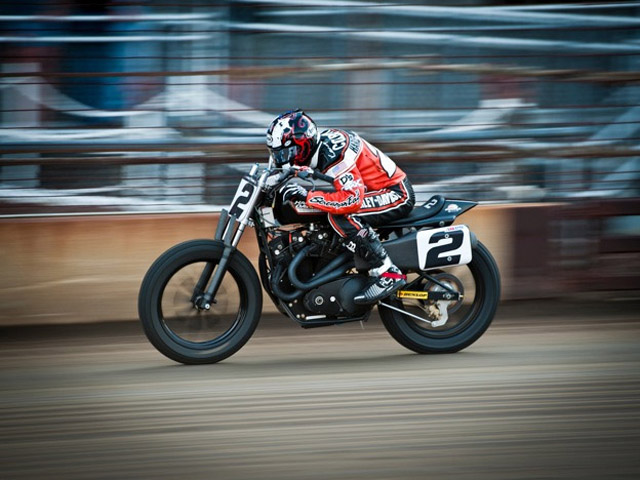 MILWAUKEE (May 31, 2011) - Kenny Coolbeth finished fourth in the opening round of the Grand National Twins portion of the 2011 AMA Pro Harley-Davidson Insurance Flat Track Championship on the Springfield Mile at the Illinois State Fairgrounds. Read more for details. – Hot Bike Magazine

Racing at Springfield was delayed until late Sunday afternoon to allow the track to dry following heavy rain on Saturday. Coolbeth placed second in a heat race to qualify for the 25-lap main. A lead pack that included Mees, Kings Kustoms rider Sammy Halbert, Brad Baker on the Lloyd Brothers Motorsports Ducati, Zanotti Racing/Schaeffer’s Harley-Davidson rider Jake Johnson, and Chris Carr on the AMA Harley-Davidson were racing together at the half-way point in the race, with Coolbeth in sixth place less than a second behind the leader. Coolbeth moved past Carr and up to fifth place on lap 15, but by lap 18 had fallen off the pace of the leaders and dropped back by more than one second. On lap 20 Coolbeth was alone in fifth place, 1.140 seconds behind Halbert in first but with a five-second lead on Carr. As the race wound down, Baker was dropped by the leaders and found himself battling Coolbeth for fourth position. Coolbeth made that pass on the last lap. Mees got by Halbert on a last-turn drafting pass to take the win by 0.016 seconds. Halbert was second, followed by Johnson in third, as Harley-Davidson riders filled the podium.

“I got stuck behind the Ducati for a few laps there towards the end. He was holding me up in the corners but pulled away on the straights and by the time I got past him, the leaders were too far up front. But overall it was a good start to the Twins season,” Coolbeth said.

Coolbeth also placed fourth in the Dash for Cash bonus sprint, which was won by Halbert.

After seven of 21 rounds in the 2011 AMA Pro Harley-Davidson Insurance Flat Track Championship, Halbert leads the series with 128 points, followed by Johnson with 112, and Coolbeth with 91. Mees and Baker are tied for fourth with 89 points.

The next race on the AMA Grand National Twins schedule is June 11 on the half-mile Hartford Motor Speedway in Hartford, Mich.