Adding A Bite With Venom 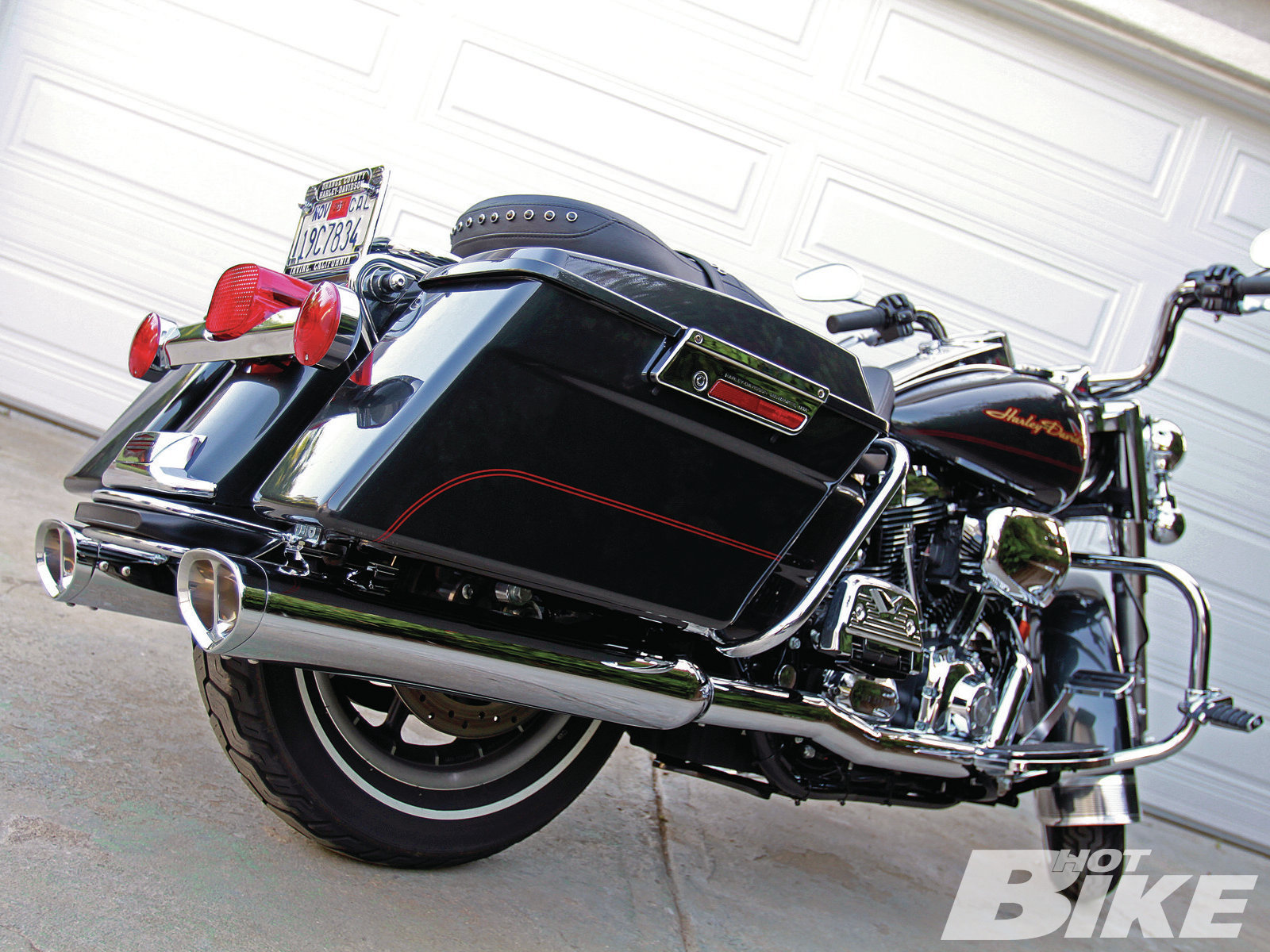 The King with its new Cobra True Dual Head Pipes, Tri-Oval Mufflers, PowerFlo Intake, and PowerPro EFI Tuner. The Tri-Oval mufflers’ unique design draws attention to the back of the bike while the exhaust note provides a smooth rumble. To hear the pipes in action check out hotbikeweb.com. 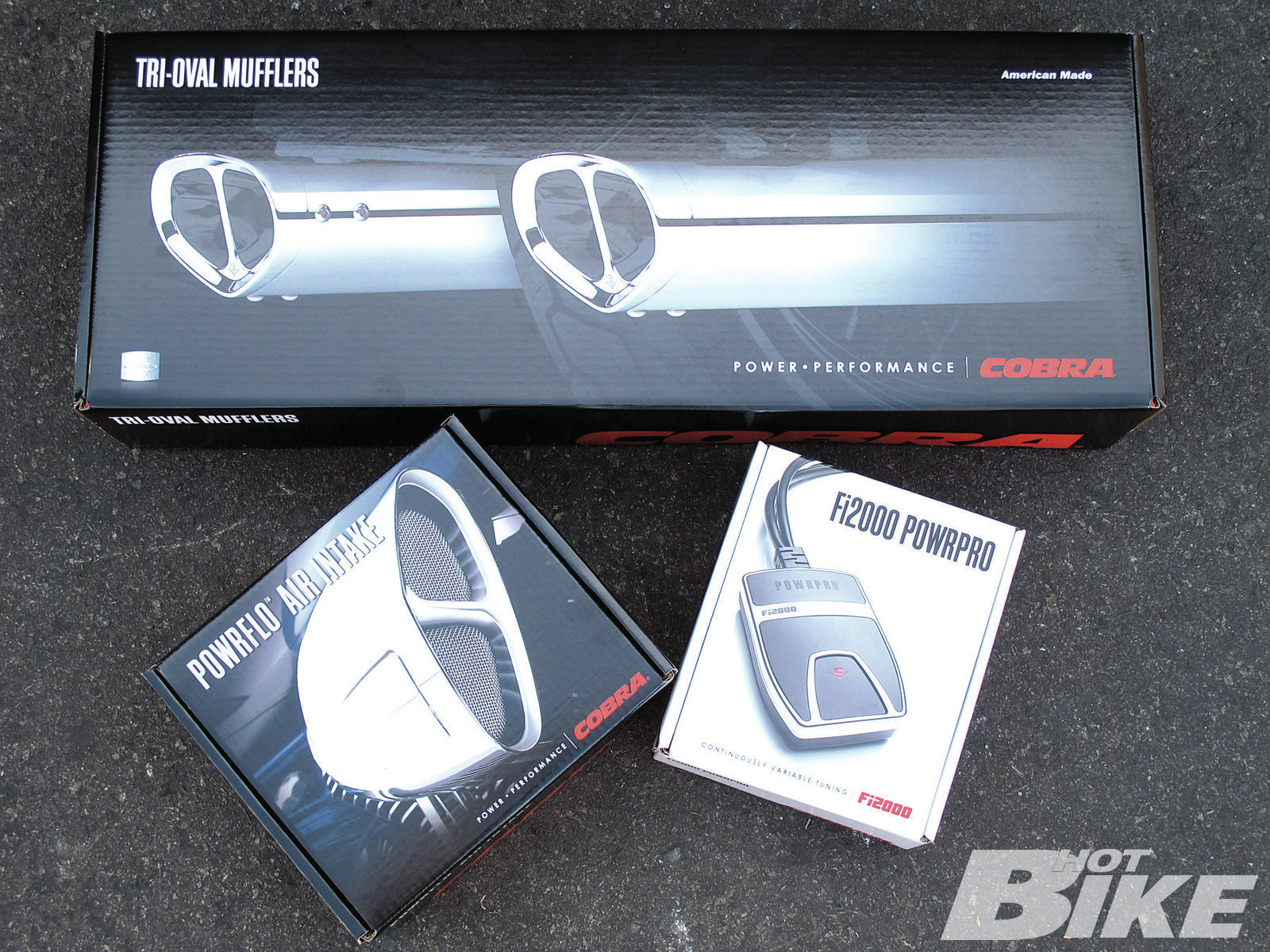 01. These are the three basics that most owners will need, although we opted for the True Dual upgrade. Cobra packs the PowerFlo and PowerPro in die-cut foam surrounding the parts like jewelry. Much effort went into the research and creation of the performance parts, and Cobra’s packaging reflected a similar effort. 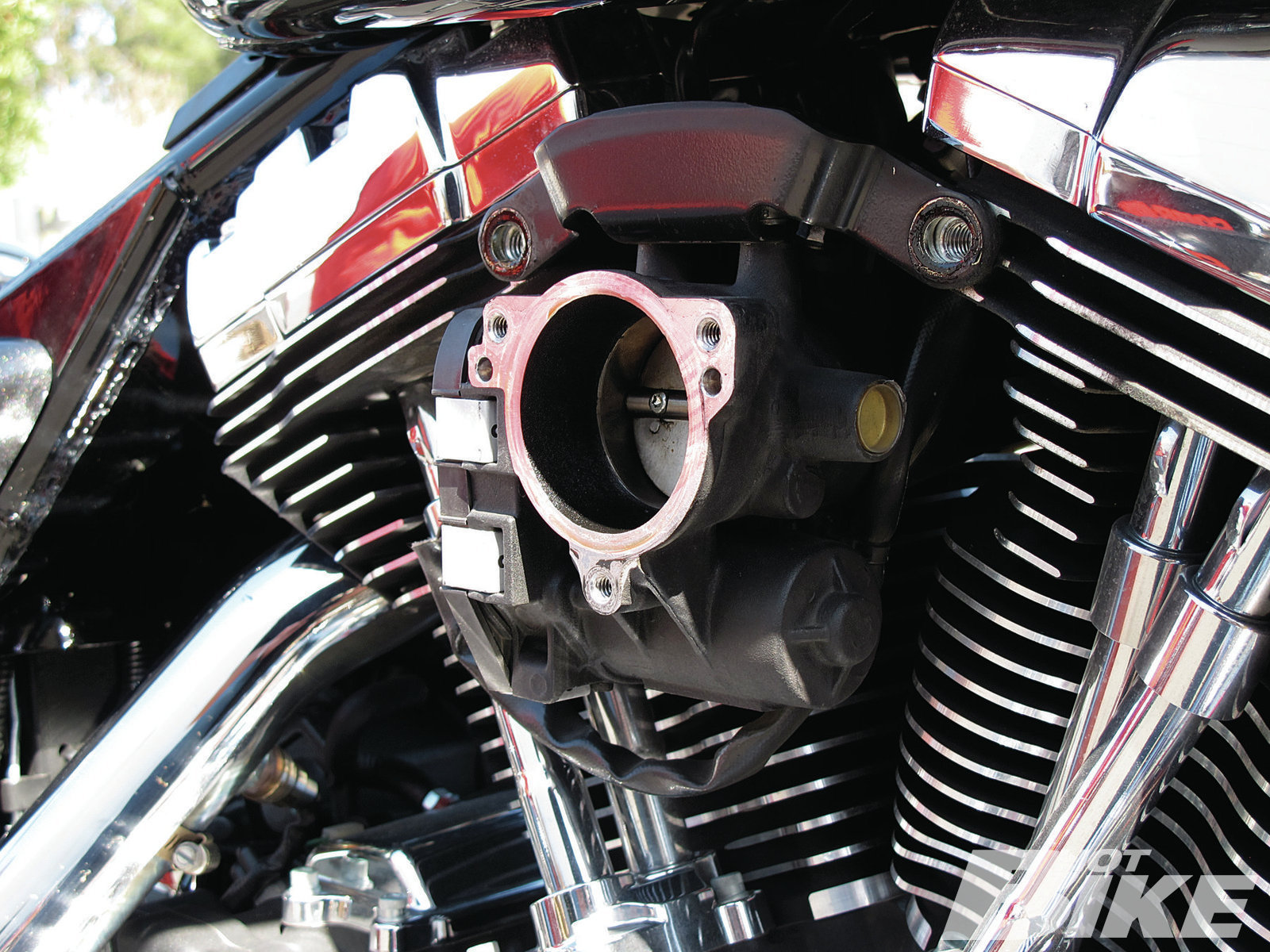 02. After running the Harley on the dyno to gather our preliminary numbers, we removed a few parts to get started. Off came both saddlebags, the seat, right side cover, air cleaner, backing plate, and breather bolts. 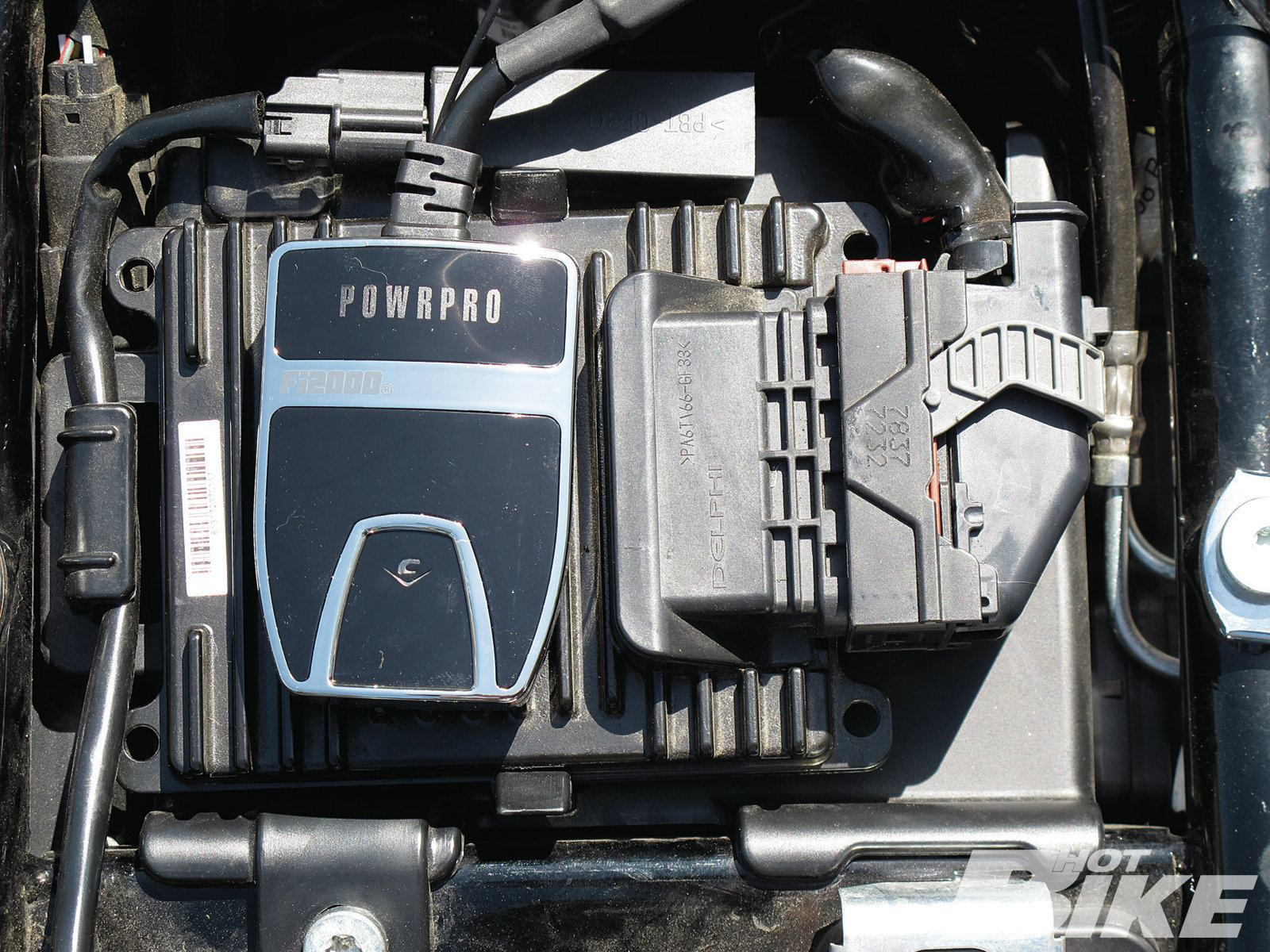 03. The Fi2000AT PowerPro module piggybacks on the bike’s ECM and comes equipped with double-sided hook and loop tape for mounting. We prepped both the PowerPro module and the ECM with some alcohol wipes to be sure the sticky side would bond well. 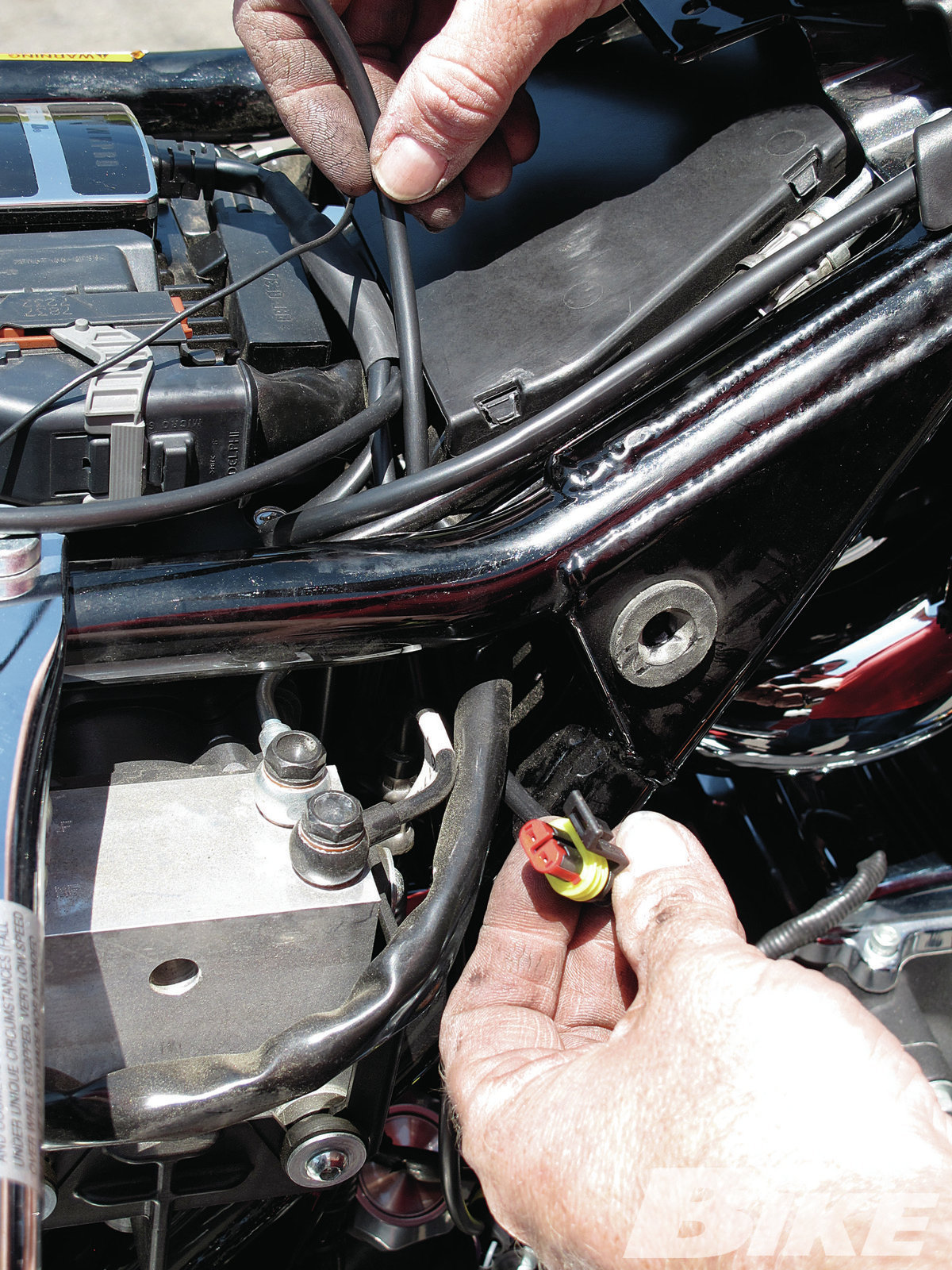 04. Following the instructions, we routed the wiring for the PowerPro down through the frame and under the backbone to drop into position. We’ll be plugging the tuning unit into both oxygen sensors and fuel injectors. 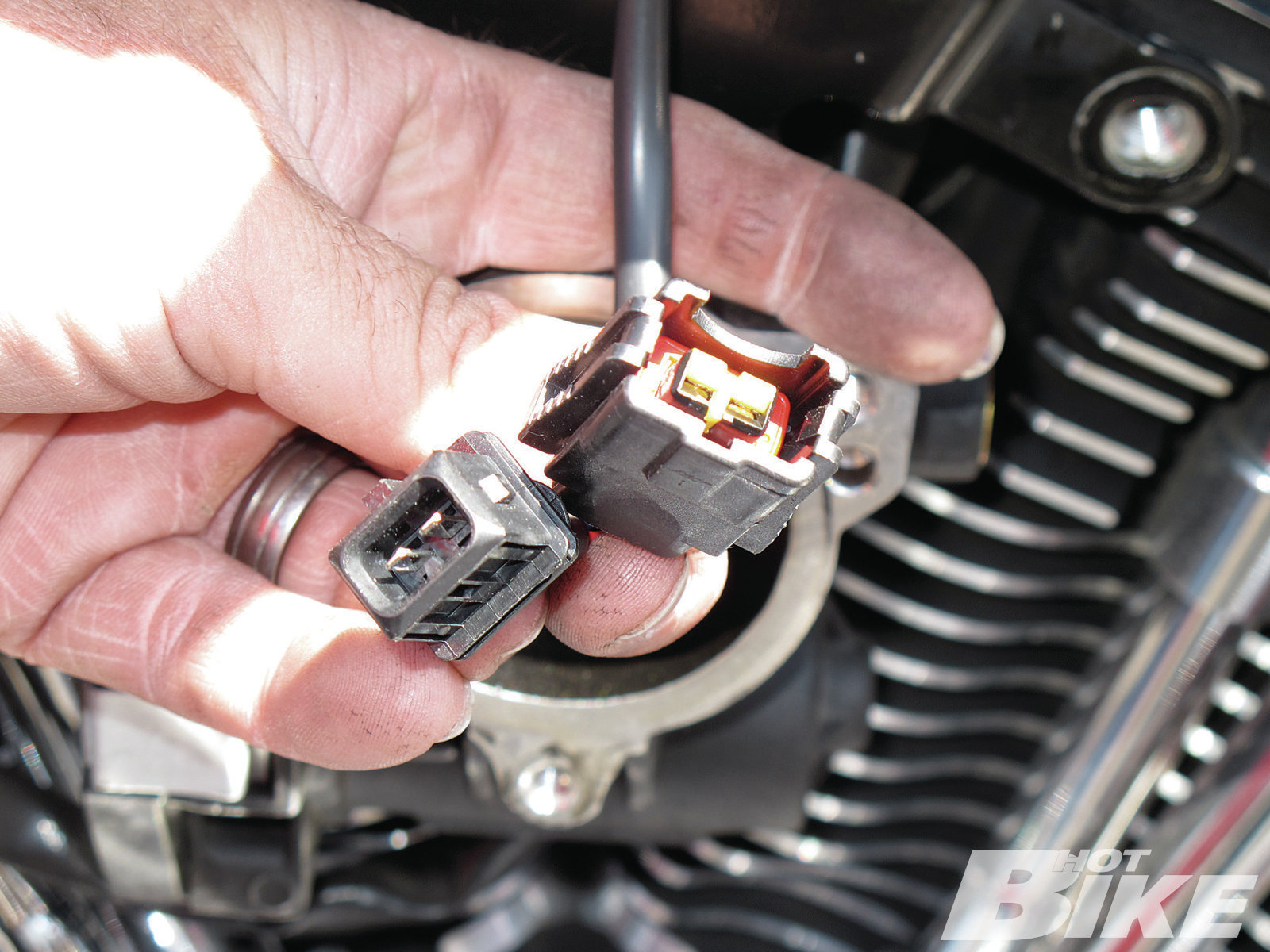 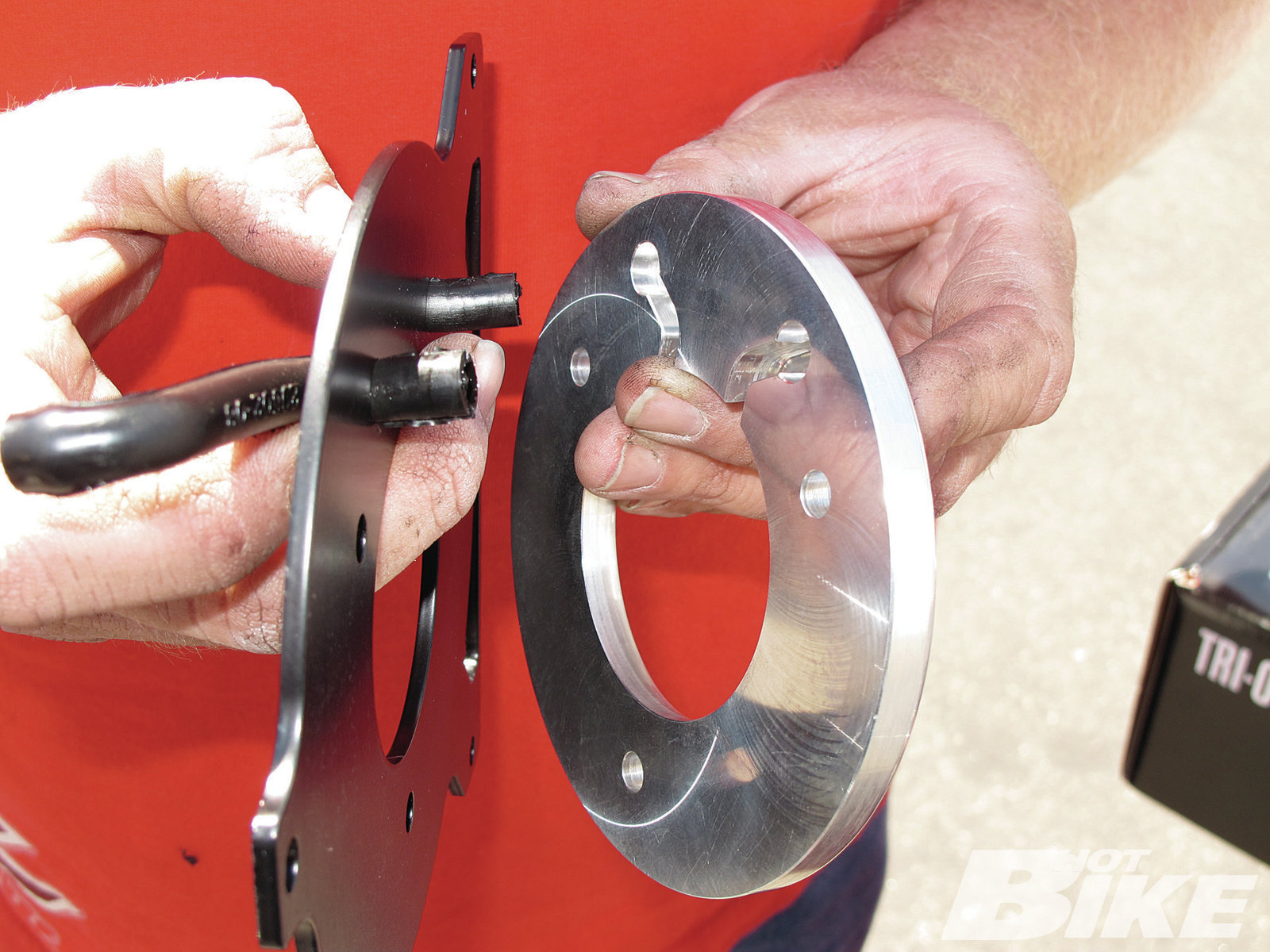 06. After finishing the fuel injection harness, we moved on to the PowerFlo intake. First to go on were the Cobra breather bolts for each head. Using the supplied hardware, the velocity stack was mated to the mounting plate. The stock breather hoses were reused and slipped in place as shown. 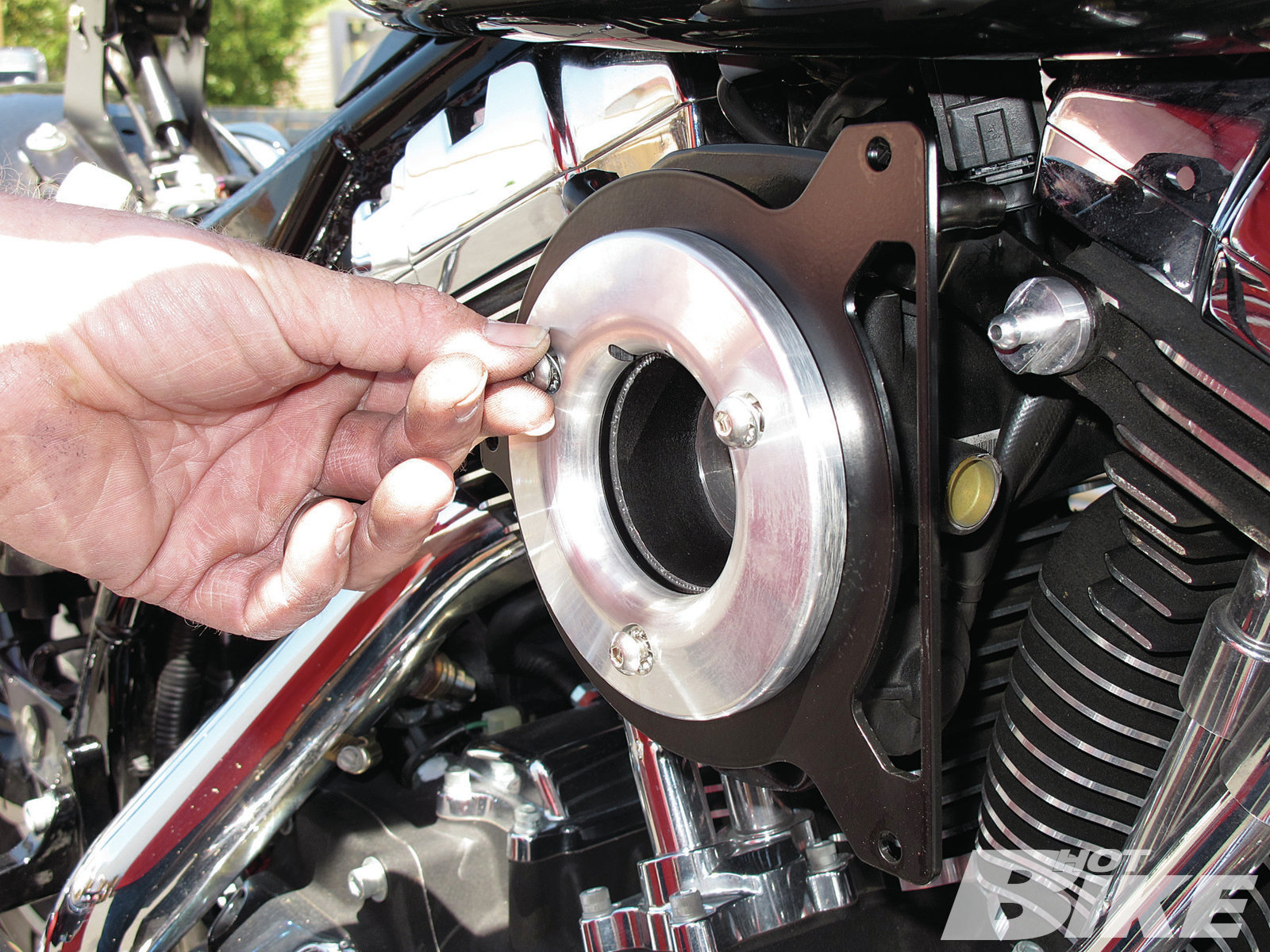 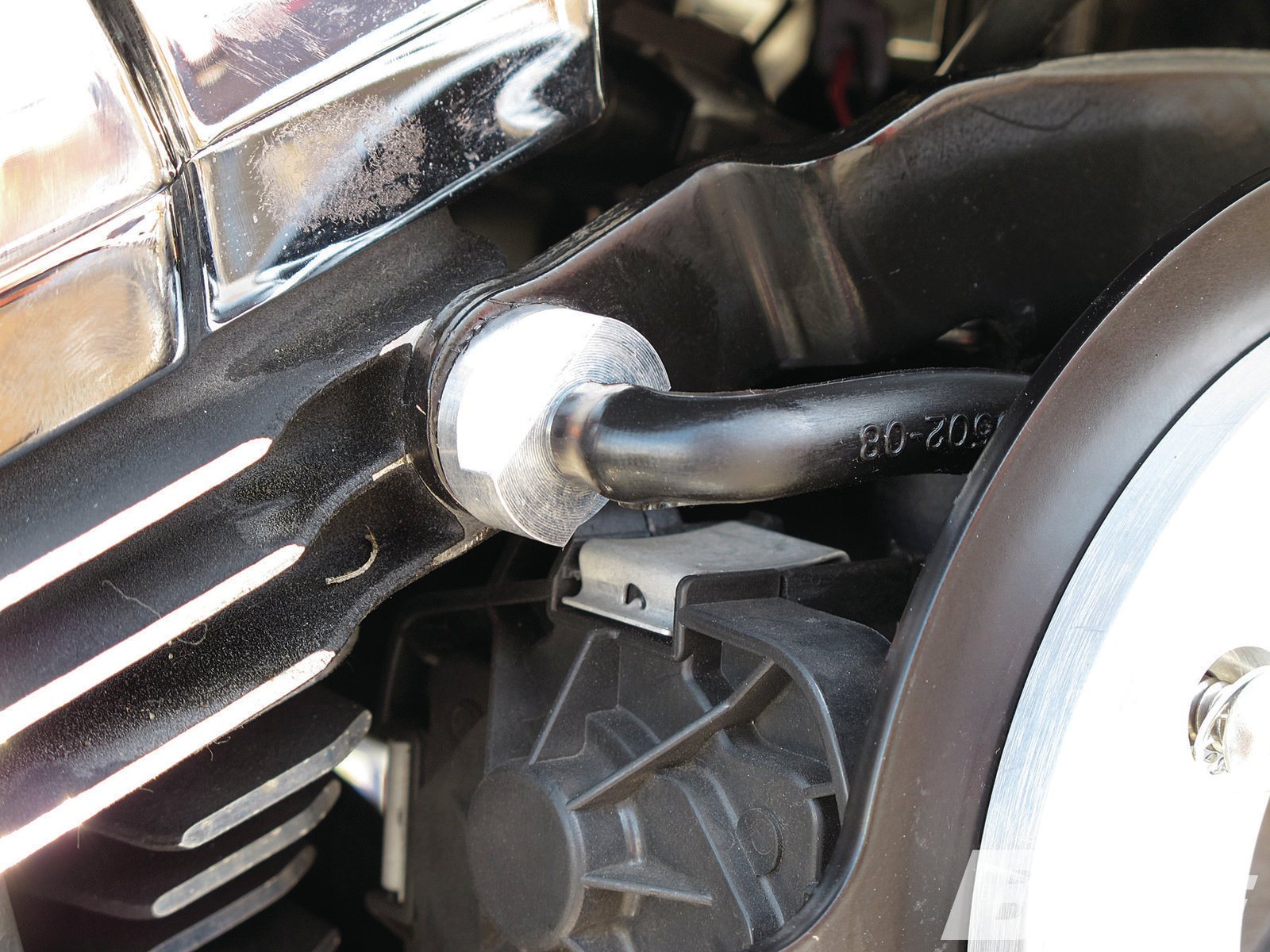 08. Both of the factory breather tubes slipped right over the nipples on the Cobra breather bolts. 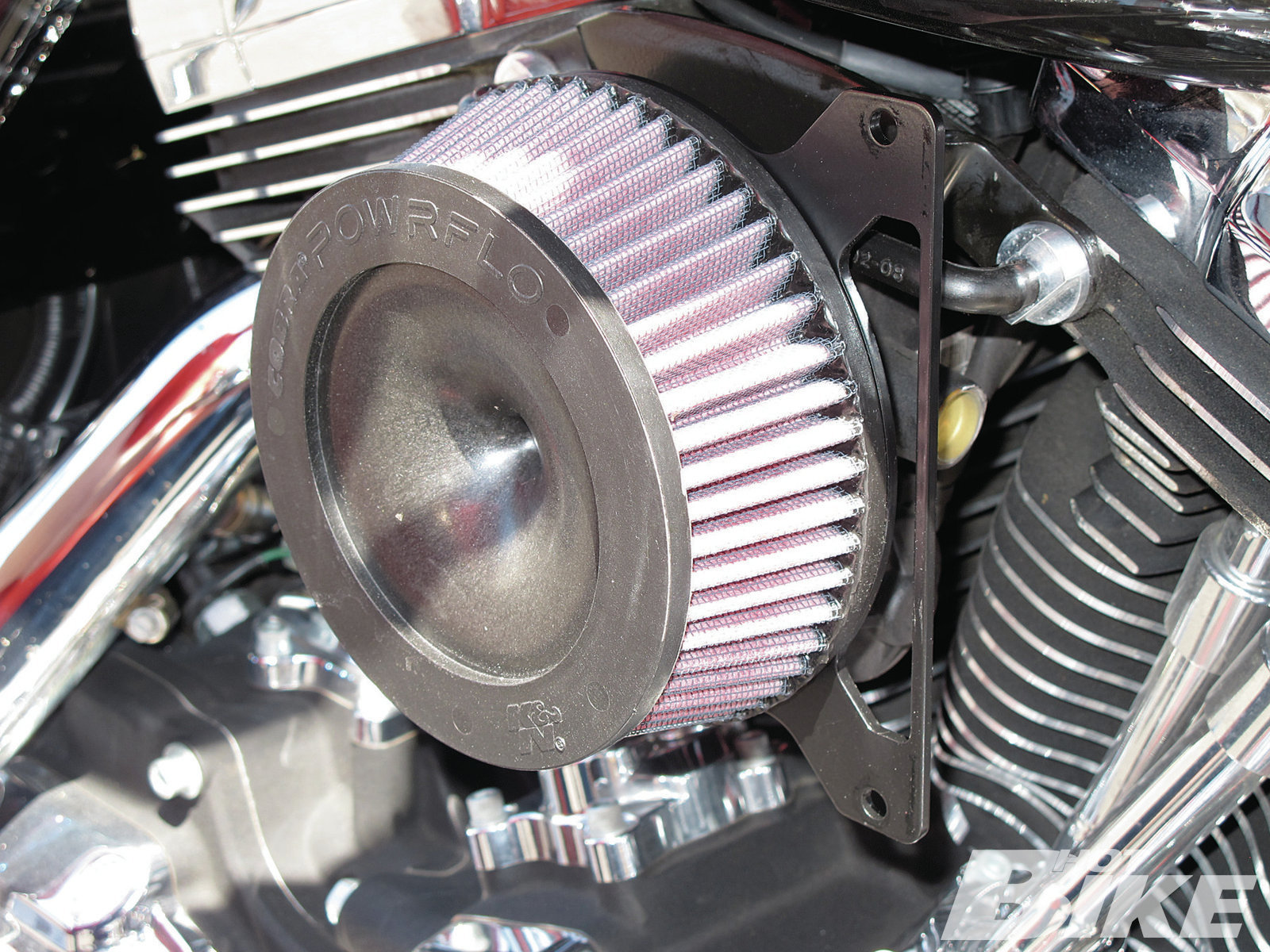 09. Everything about the air cleaner system is designed to route the incoming rush of air smoothly. Even the PowerFlo’s K&N; filter has a venturi built into it. 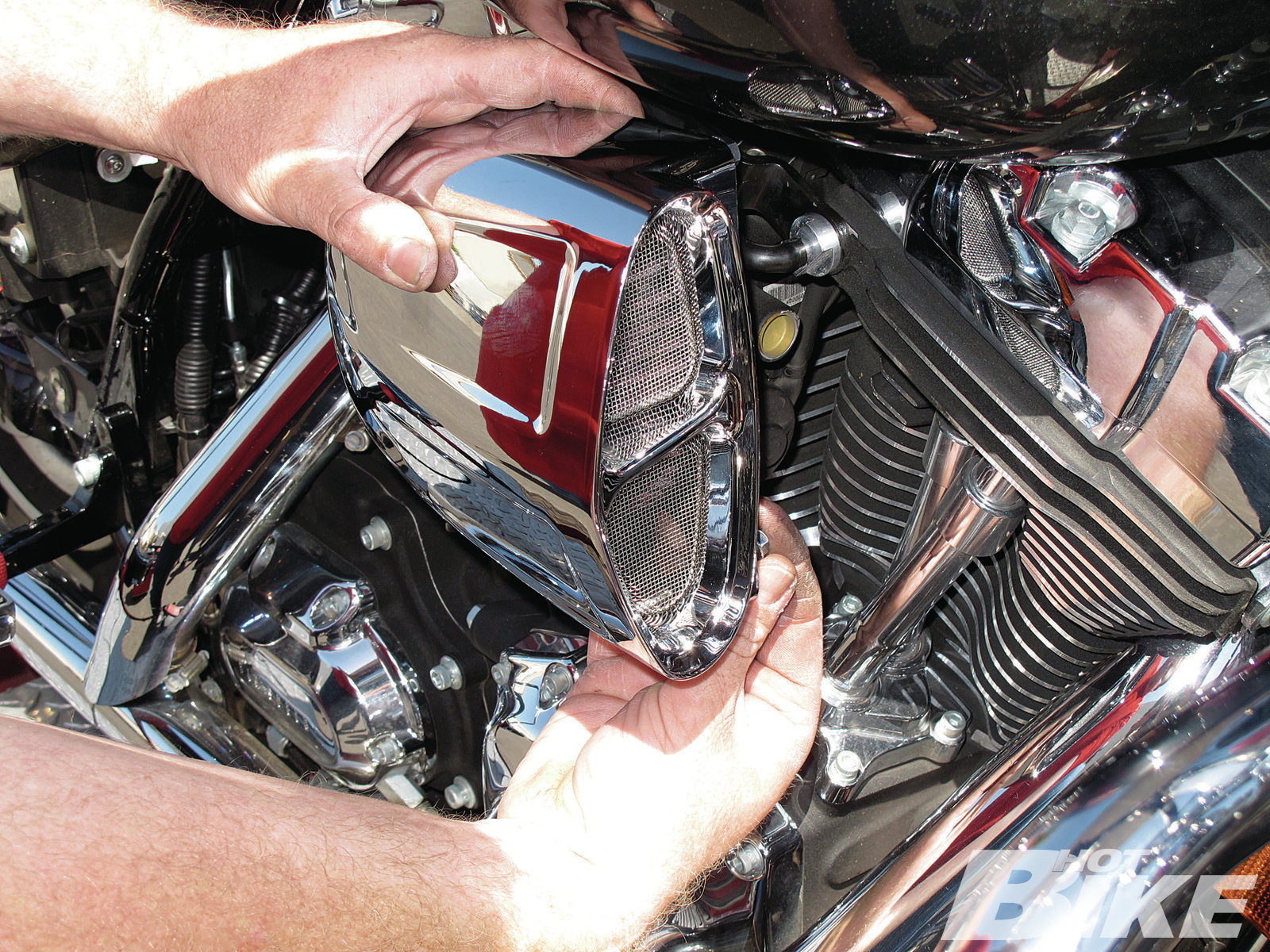 10. Completing the puzzle of parts is the intake cover. It’s held onto the mounting plate with three 1/4-20×5/8-inch bolts. 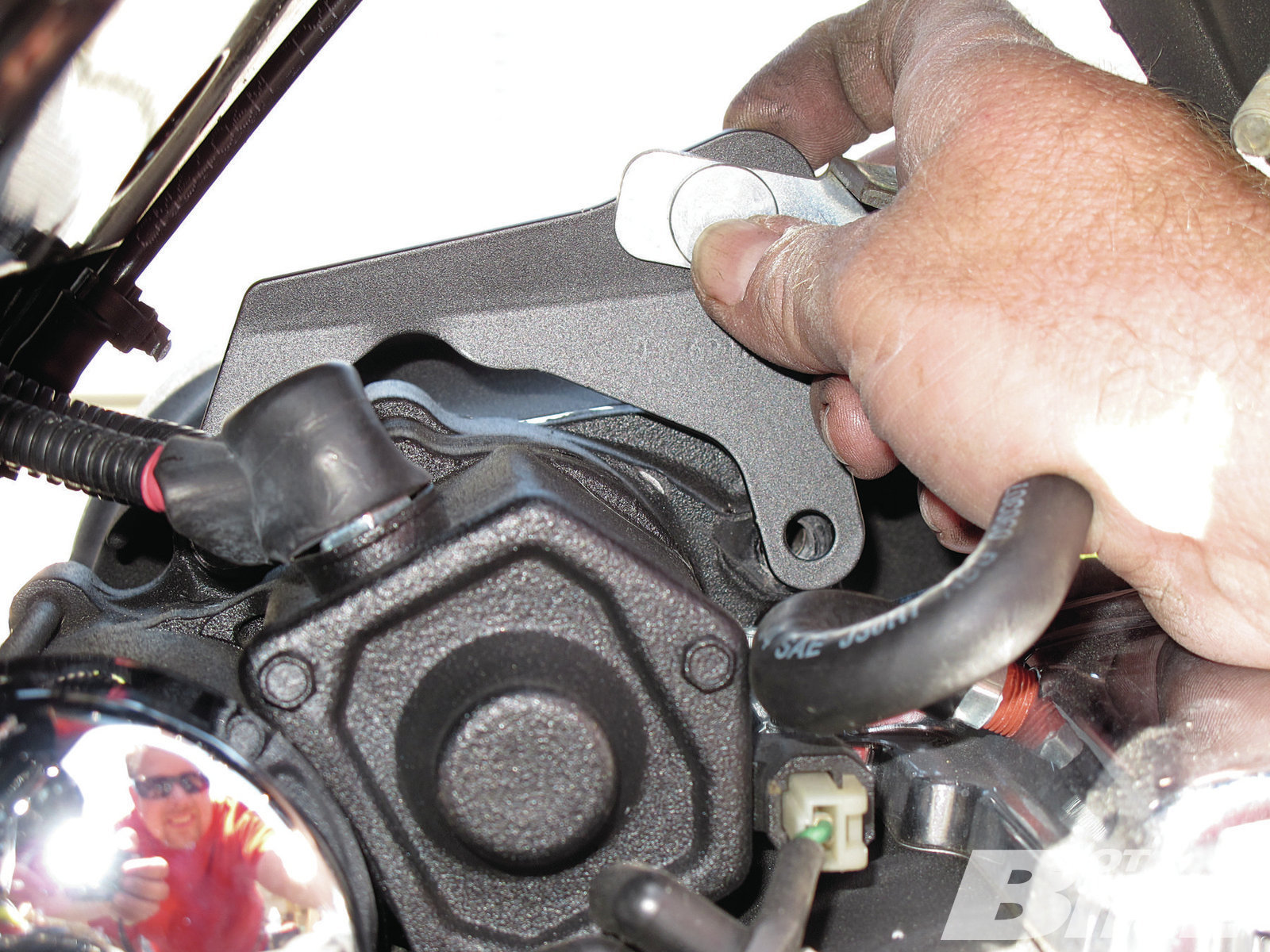 11. Moving right along, the entire stock exhaust system was dropped from the Road King along with both rider floorboards and brackets. That allowed us to remove the original support bracket and install the Cobra rear head pipe bracket into place with the stock bolts. 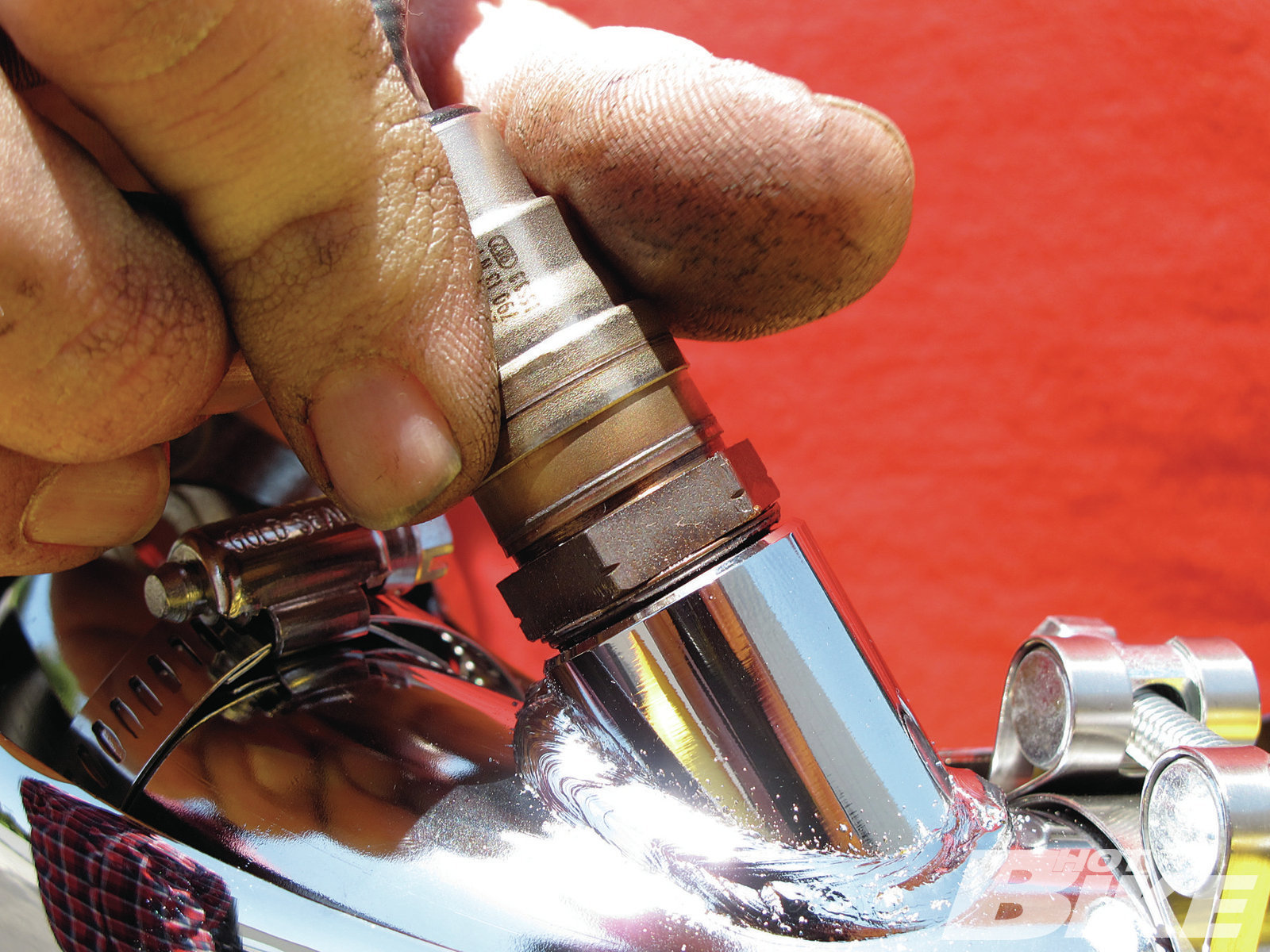 12. It was required to transfer the oxygen sensors over to the Cobra True Dual exhaust. We made sure to douse the threads with a healthy coating of high-temperature anti-seize before tightening the sensors into the bungs. 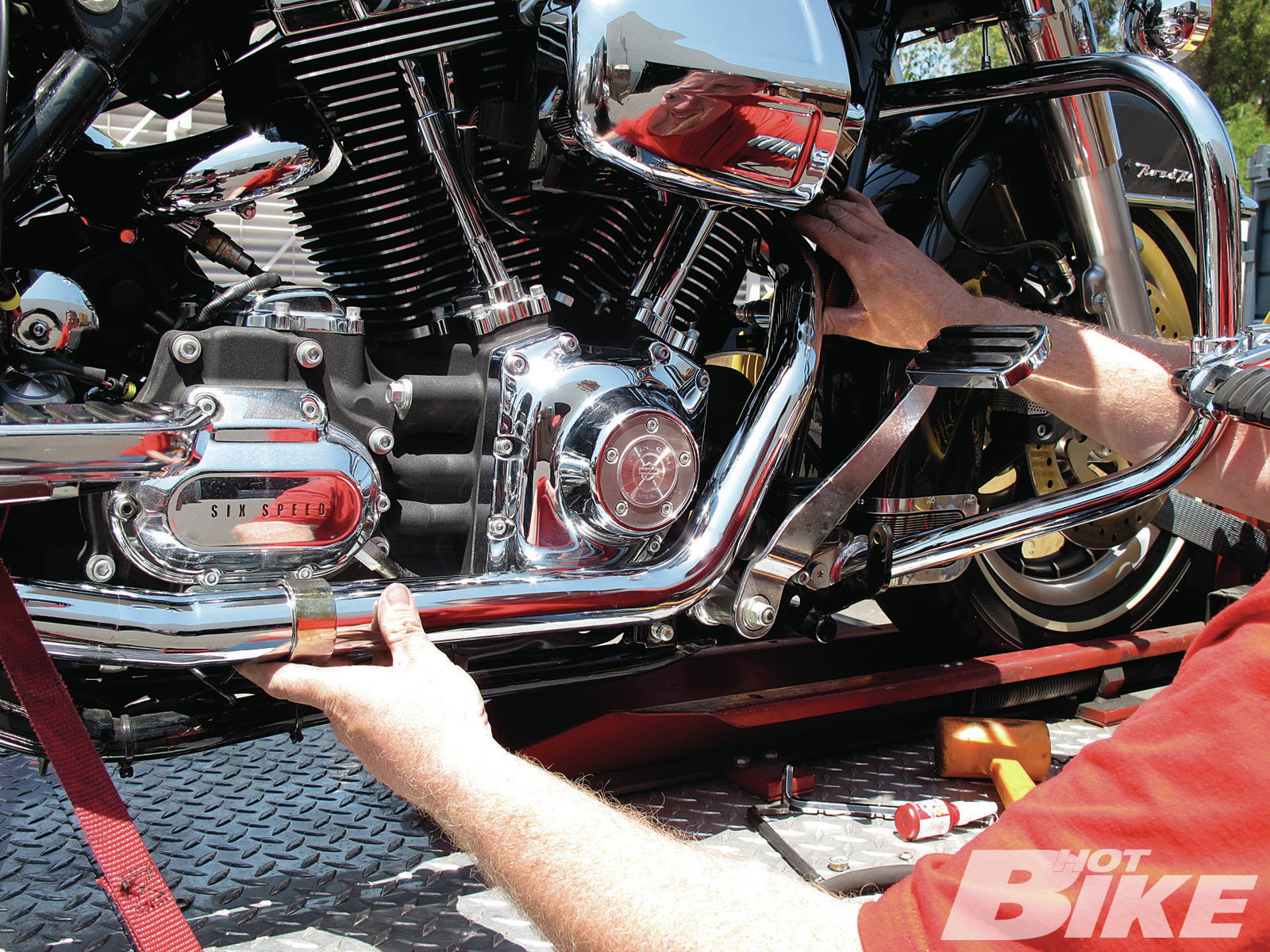 13. Installation of the new head pipes was simple and required the use of the Harley’s stock support clamps. Routing on the left side pipe was clean and unobtrusive to the rider or passenger. 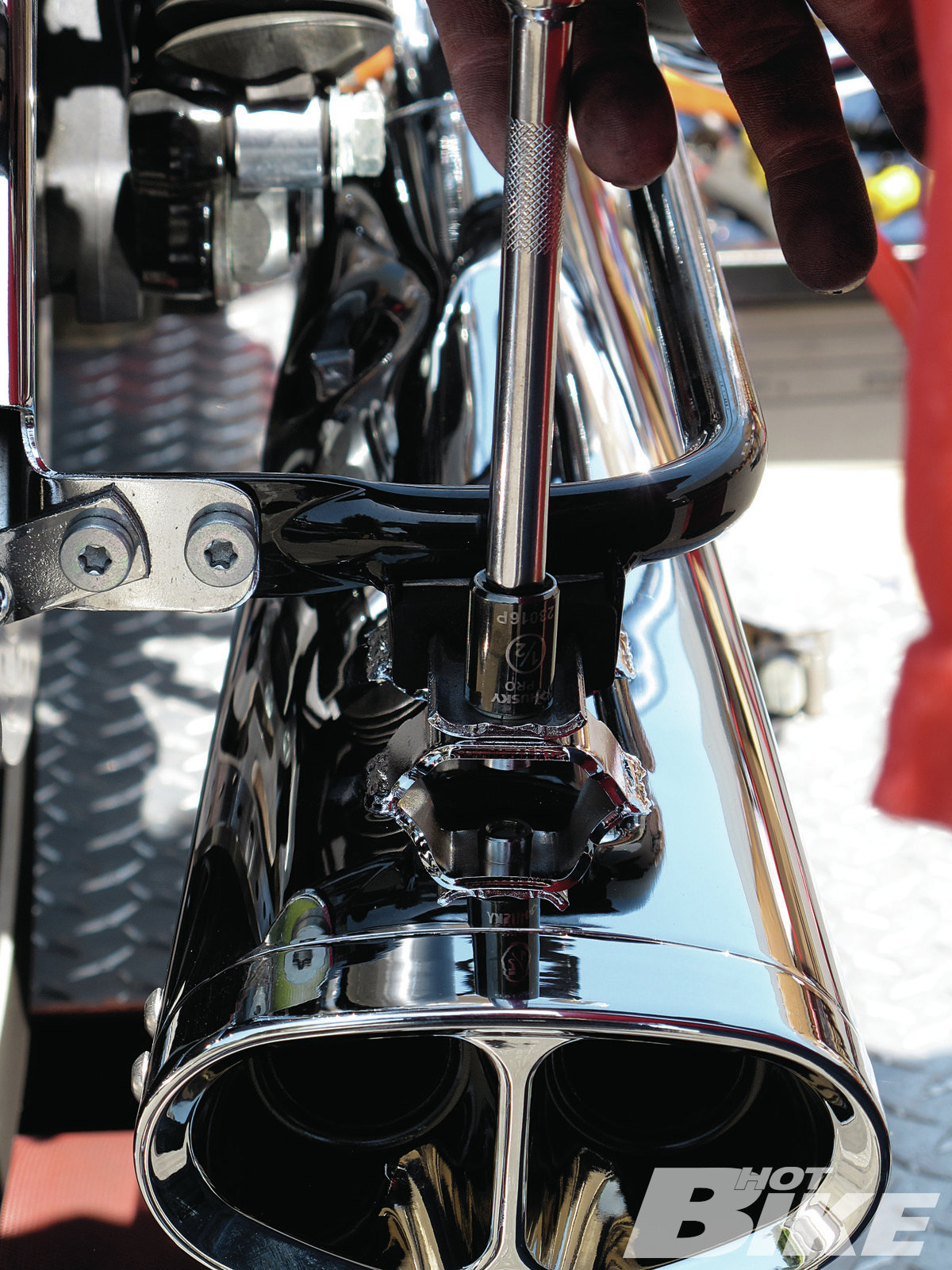 14. A little extra time was spent ensuring the left and right Tri Oval mufflers were square and level to each other before finally cranking down the hardware. A quick run through the heat shields had the system completed. 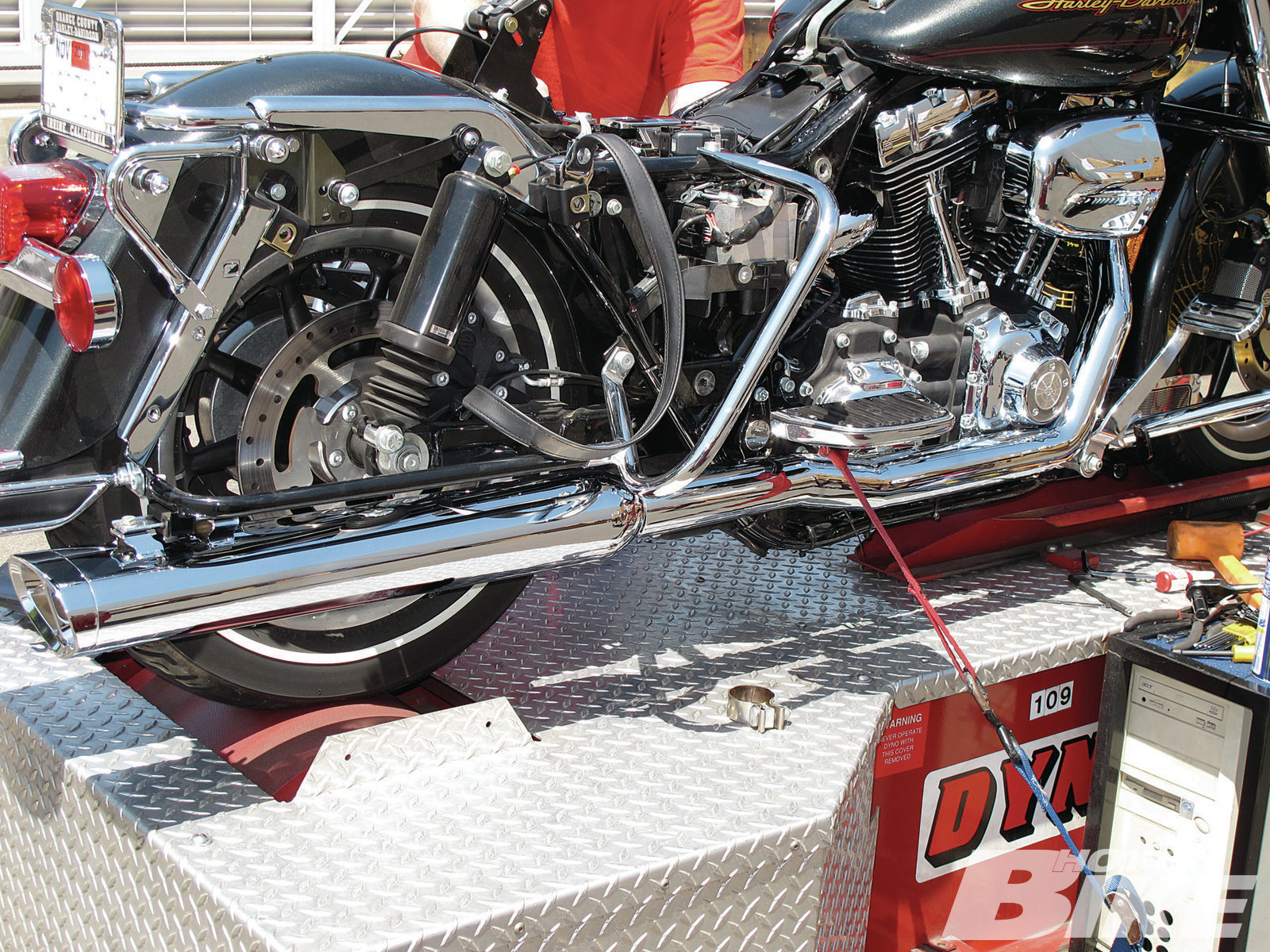 15. We cleaned up the routing of the PowerPro’s wiring and plugged in the harness for the ECM and oxygen sensors. At this point, we supplied power and ground to the tuner and clicked on the ignition to ensure proper operation. 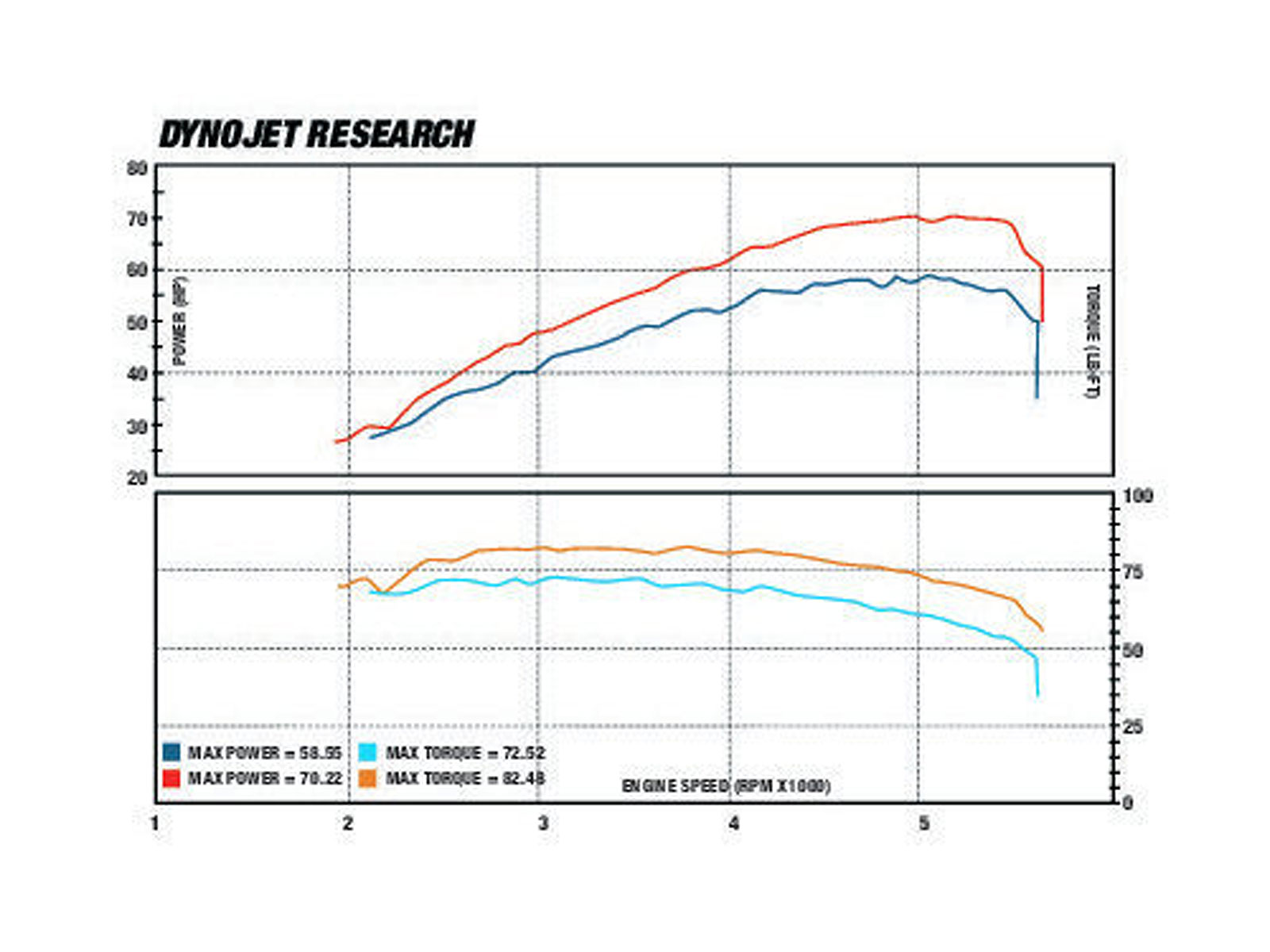 16. The Road King was redressed with its side panel, saddlebags, seat, and footboards, then test ridden a number of miles to get everything up to temperature and allow the PowerPro time to tune the 96-inch mill. Back on the dyno for a final pull, we were amazed to see such a large improvement in the figures. Horsepower jumped up 11.67 points while the torque level came in at an additional 9.96 lb-ft. Totals were 70.22 hp with 82.48 lb-ft of torque. That’s an improvement that can be felt all over the rpm range and especially riding with a passenger and/or gear.

The old adage tells us that power corrupts, and absolute power corrupts absolutely. Now, we don’t know much about absolute power, but we do know that darn near any factory-equipped V-twin leaves plenty of room for improvement on the power-delivery scale. For a case in point, we present an ’08 Harley EFI Road King. Coming straight from the Milwaukee MoCo with a pair of jugs measuring in at 96ci and backed by the Factory’s six-speed transmission, its lack of overall power was fairly noticeable when laden with riders and a little gear for a weekend getaway. Not wanting to always be running the shifter peg up and down looking for more pulling power, we placed a call to Cobra Engineering in Yorba Linda, California, for some help in adding the extra ponies we dearly wanted. What happened on the dyno was more than we could have hoped for.

Once in the door at Cobra, a quick overview was done on the Road King to determine what its ailments were. A glance at the full factory exhaust and air cleaner were all that the good doctor needed to determine a plan of action. Peering at the prescription pad put a smile on our face, as we knew all the ailments would soon be cured. Breathing in was going to be handled with a PowerFlo intake ($249.95) while gasses out would be handled with both the True Dual Head Pipes ($399.95) and Tri-Oval Slip-On mufflers ($539.95). Being this cruiser was an EFI machine; we needed some way to tell the ECM what changes were made to the breathing system for the V-twin. Enter Cobra’s latest piggyback module, the Fi2000 PowerPro ($599.95).

Now, the intake and exhaust are simple and easy to understand, so we’ll delve into the PowerPro. Cobra’s latest controller in the Fi2000 series is designed to always supply your bike with optimum fuel ratios. The unit tunes fuel delivery in every gear, with every environmental change, and every engine modification. According to Cobra, the PowerPro reads the bike’s EFI delivery at more than 80 times per second to optimize the air and fuel ratio under any and all loads. What this means is, no matter what kind of new hardware is installed on your bike, the PowerPro provides constant variable tuning in real time without having to constantly alter the fuel maps every time you upgrade parts for additional power. We were intrigued with the information given us, so we jumped right in to adding some bite to go with our Road King’s bark. HB