A Sugar Bear fork brings the style to this rigid, big time

Long choppers aren’t usually the moto fare we run on this site, but when you see something that really captures the essence of the long urban chopper era as well as this machine does, well, sometimes you have to make an exception.

George and Dee Stinsman are the brains (culprits?) behind Chaos Cycle in New York. They got to scratch the itch to build a chopper around one of Sugar Bear’s fork sets when a customer with a strong interest in that style of motorcycle came to them pining for a 1960s-esque chopper. It was win-win for everyone!

George says, “We started with a 40-inch-over Sugar Bear springer with his unique rockers and had Anthony from Chassis Design build a frame to match. Then we took the frame and modified it to incorporate oil coolers in the downtubes to give a little extra flair to the frame and add some functionality.”

With the chassis officially declared a roller, Chaos set its sights on creating the tins in-house. George had long admired a caliper Greg Westbury had made for his Biker Build-Off bike, “So I gave him a call and asked him if he had anymore. Coincidently he had recently disassembled the bike and was willing to sell me the actual one he used.” How cool is that?

After that, they built a very minimalistic sissy bar and sat Darius, the customer in question, on the bike to set the handlebars for his riding stance, inside some Indian Larry throwback risers. Chaos also made a seat pan and sent it to Christian at Xian Leather to finish it off. Those custom tins also went out to Ryzart for some candy magic paintwork.

The end result was an 11-1/2-foot-long motorcycle that, to anybody who has seen Darius ride it, rules the streets of Brooklyn. 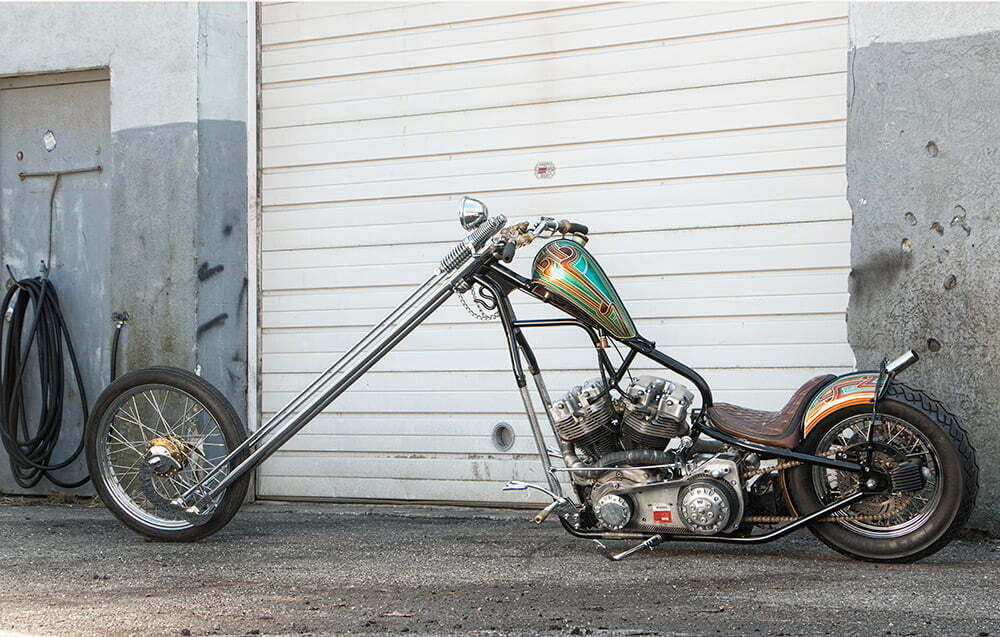 Goosenecking kicks the neck 4 inches out and extra tubing sends it 6 inches up to boot. 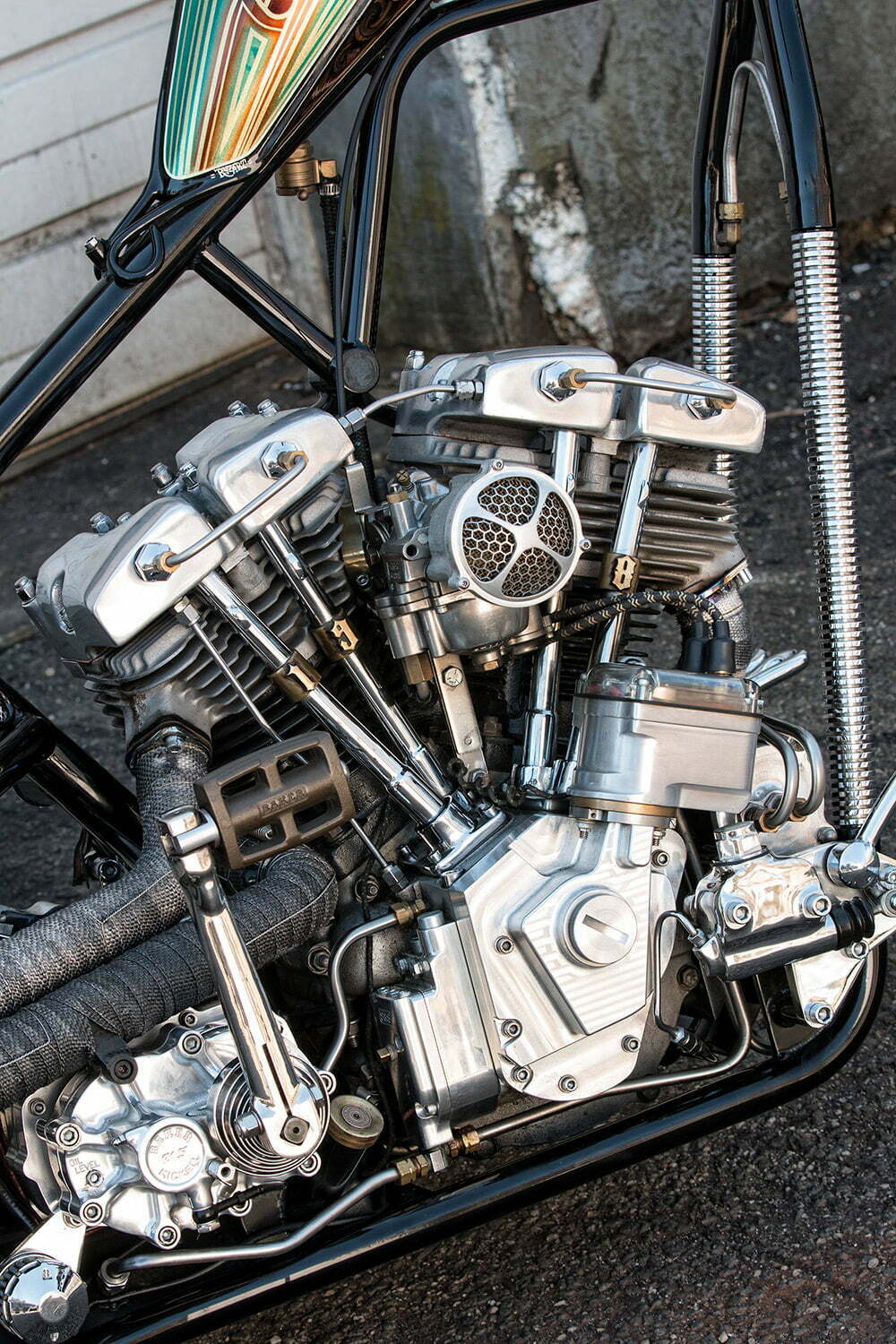 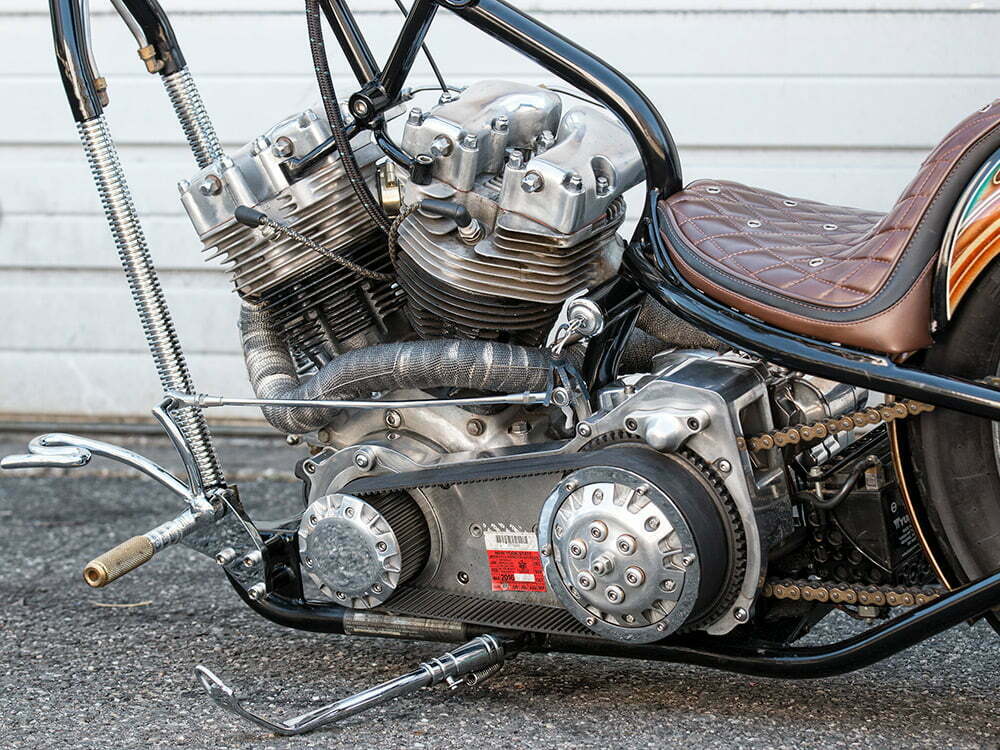 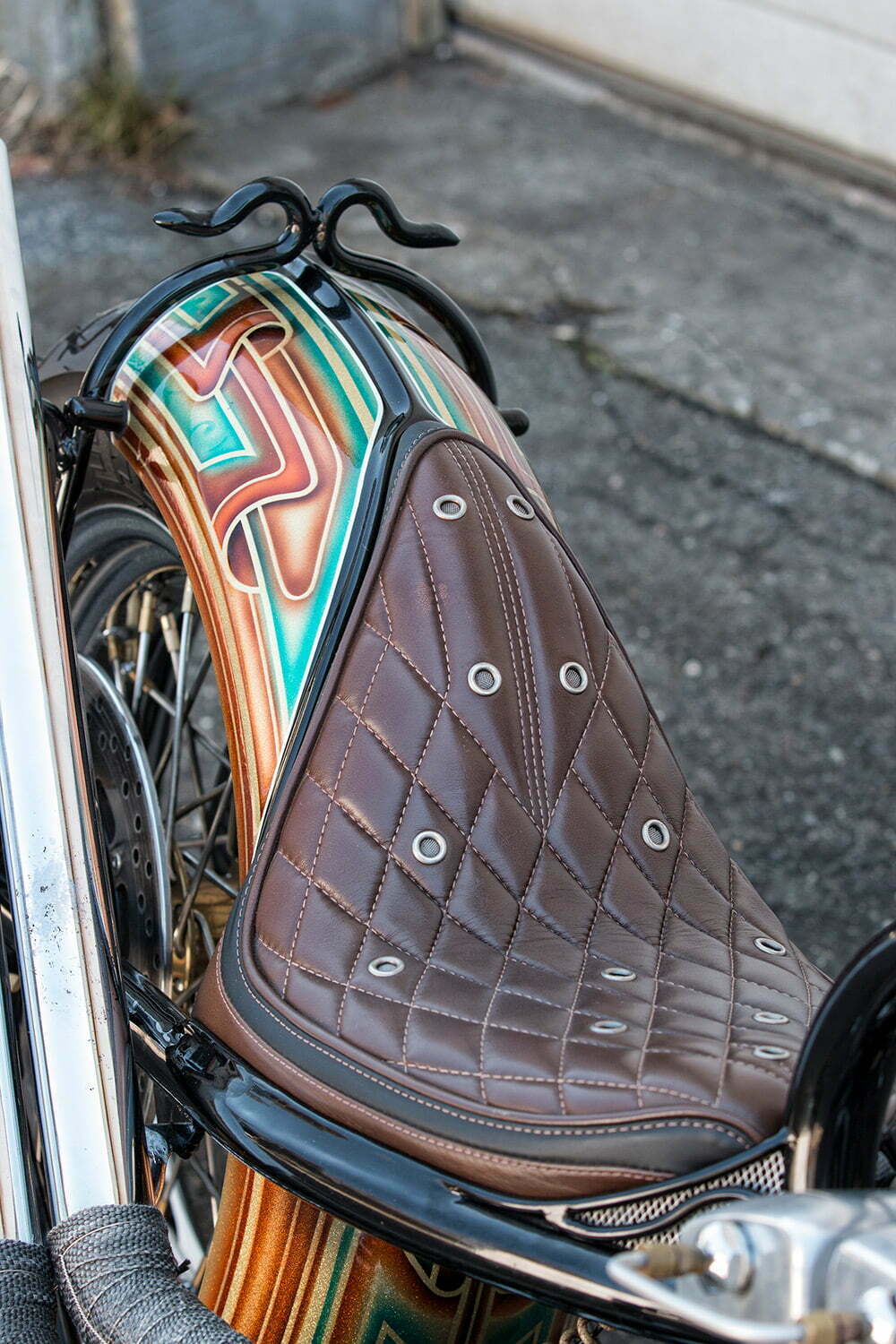 Diamond-stitch pattern in the leather. 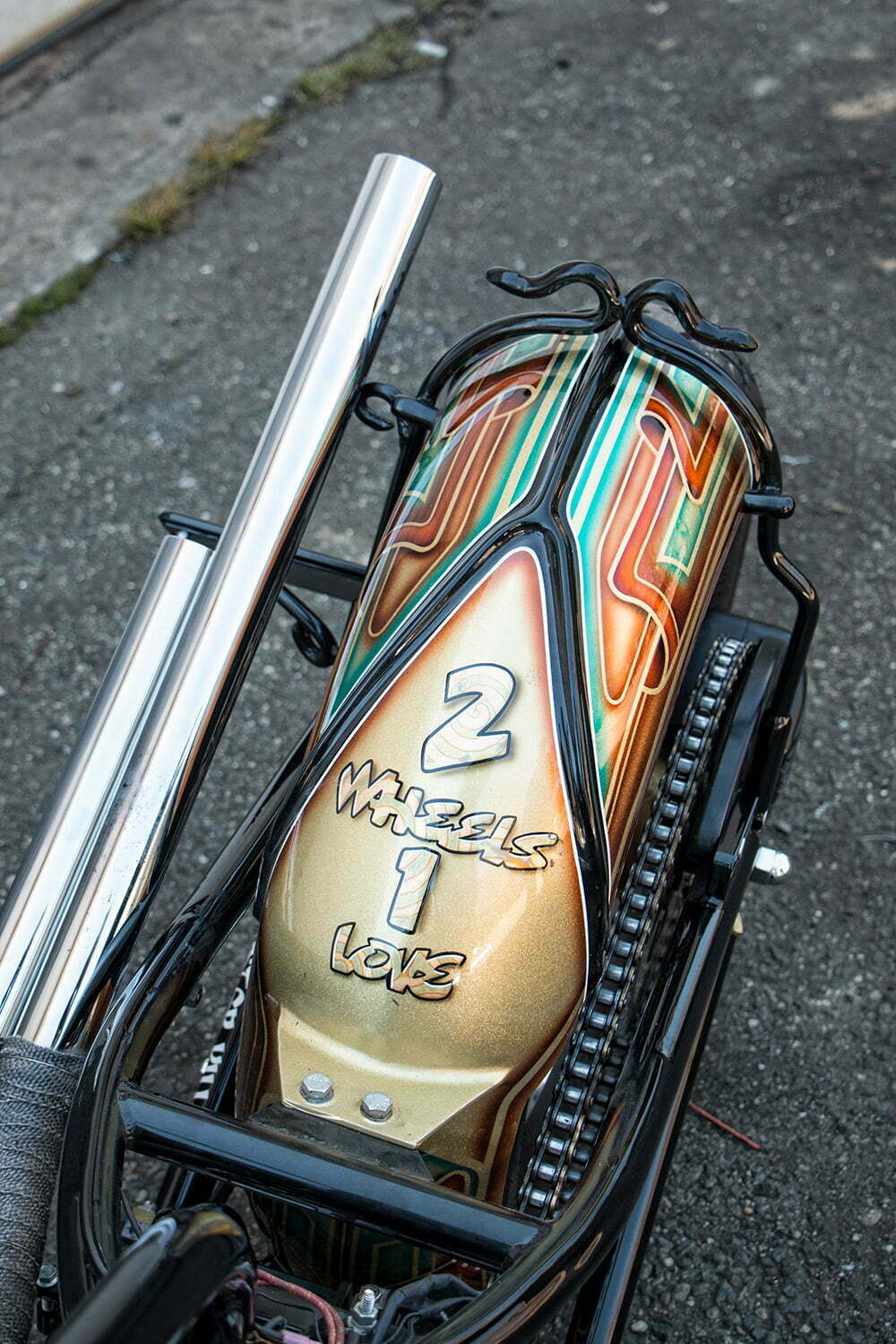 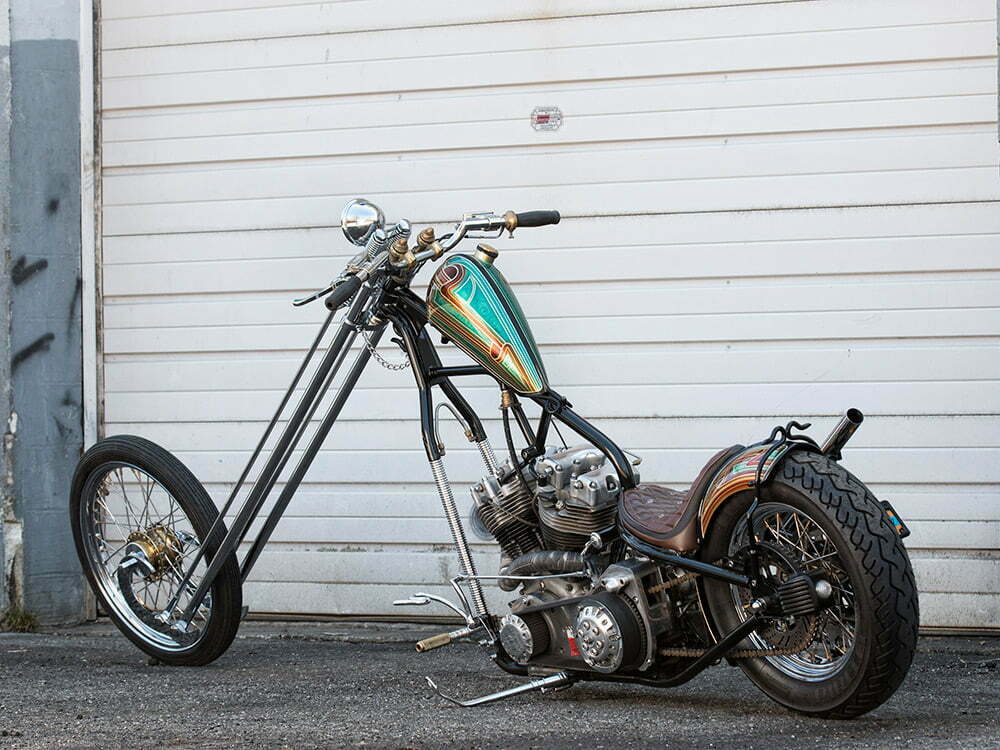 Chaos Cycle kept the profile on the skinny side. This isn’t 2005; no fat back tires were injured in the making of this rigid chopper. 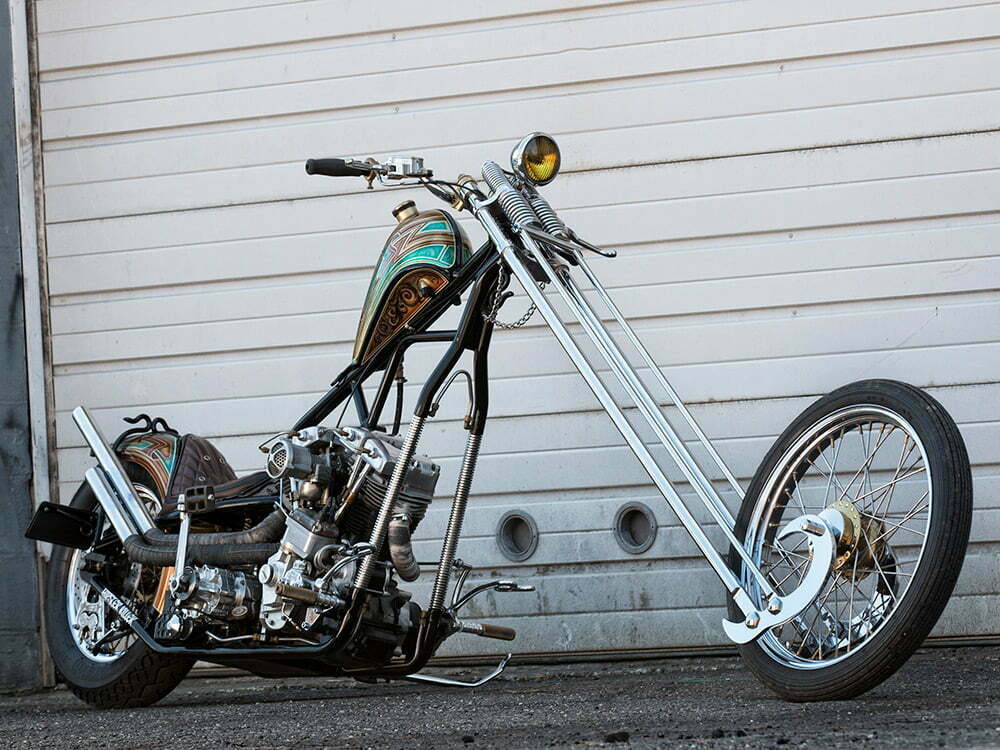 Is it comfy for weekend Starbucks runs after church? No. But just imagine what everyone would think if you did that on this chopper.