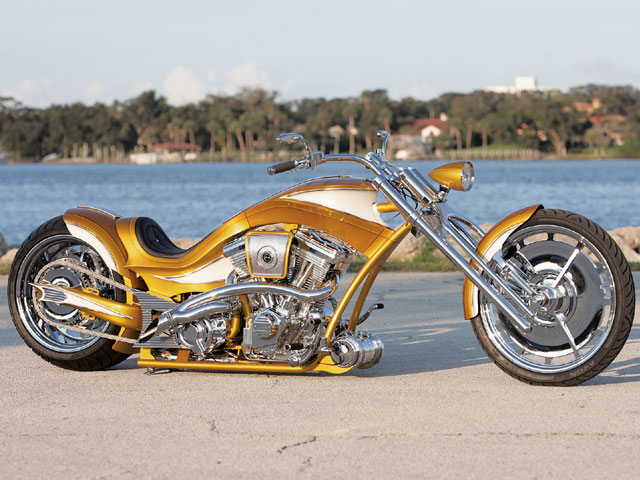 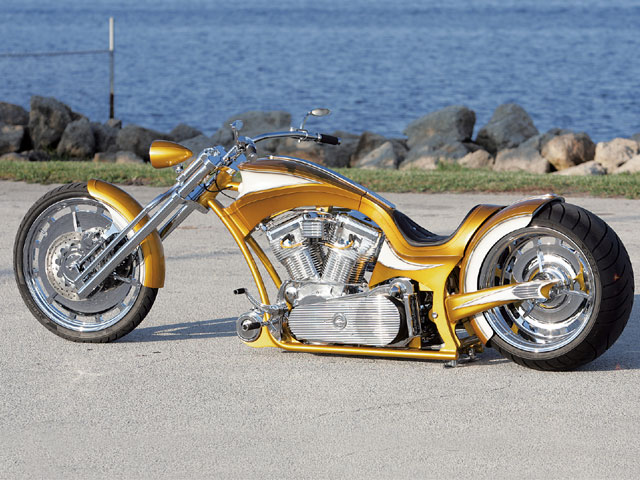 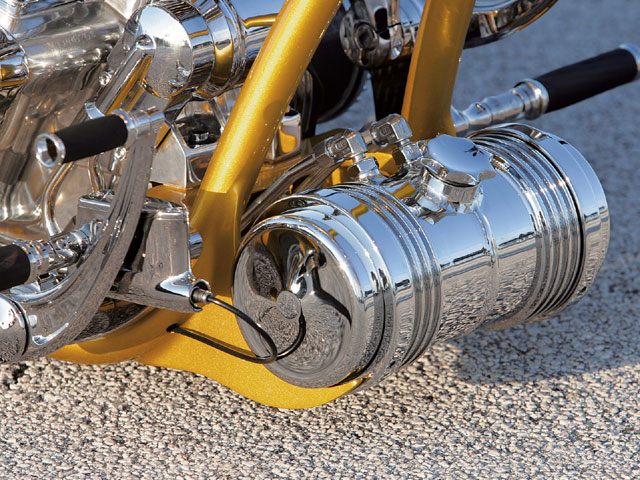 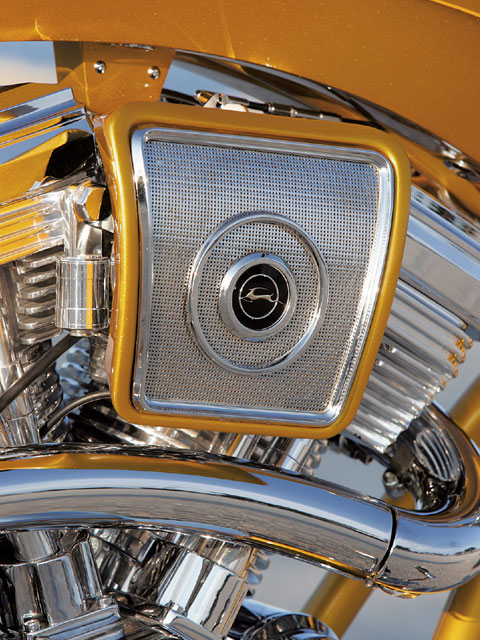 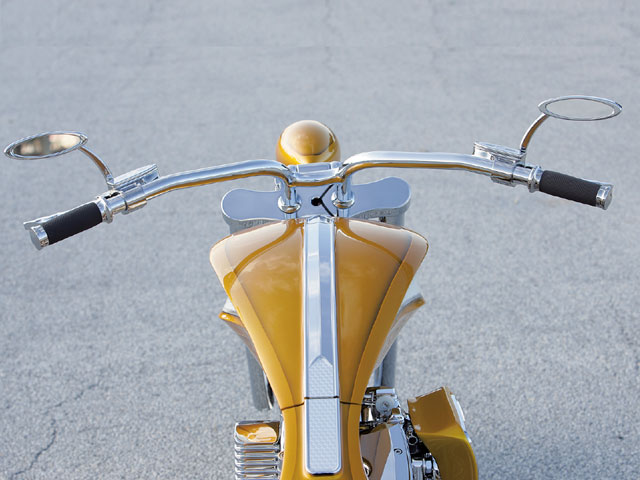 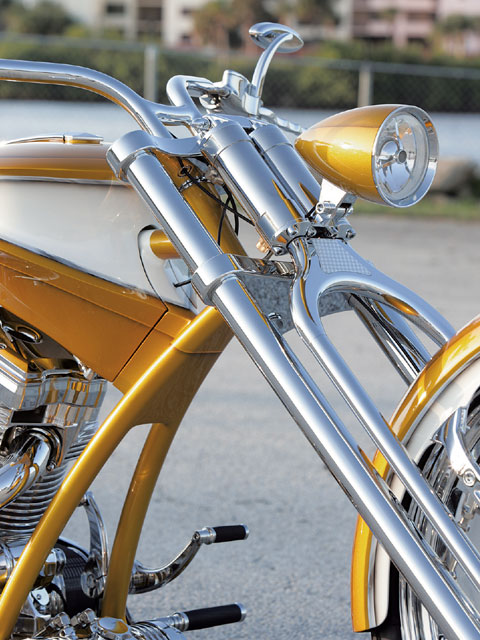 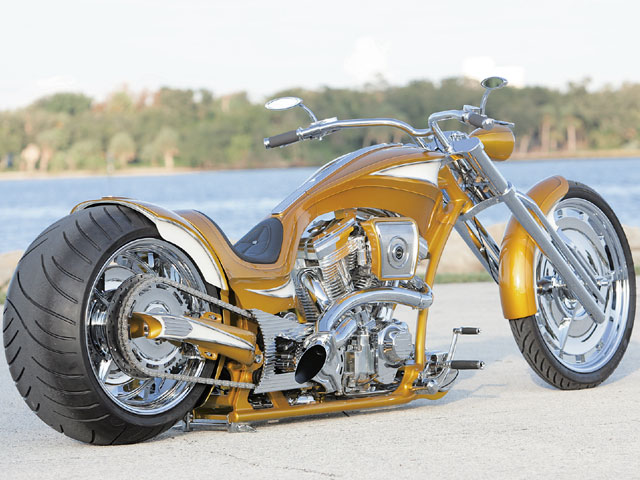 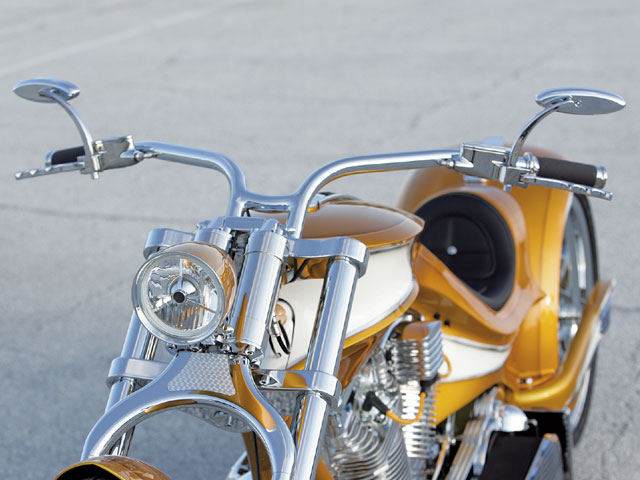 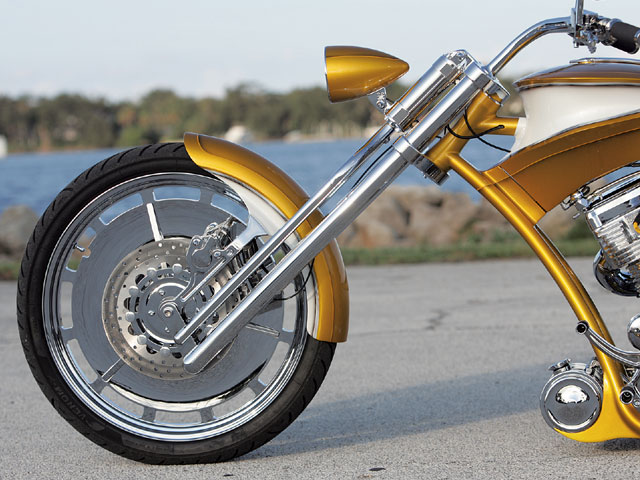 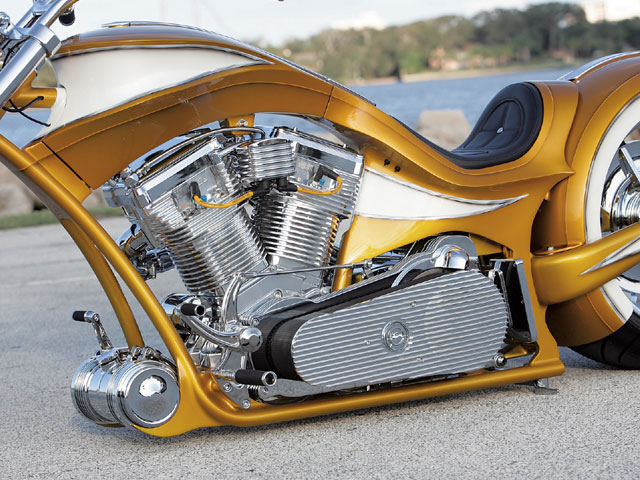 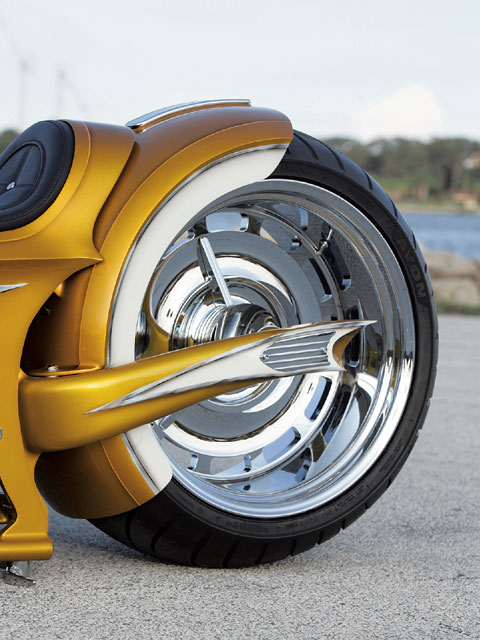 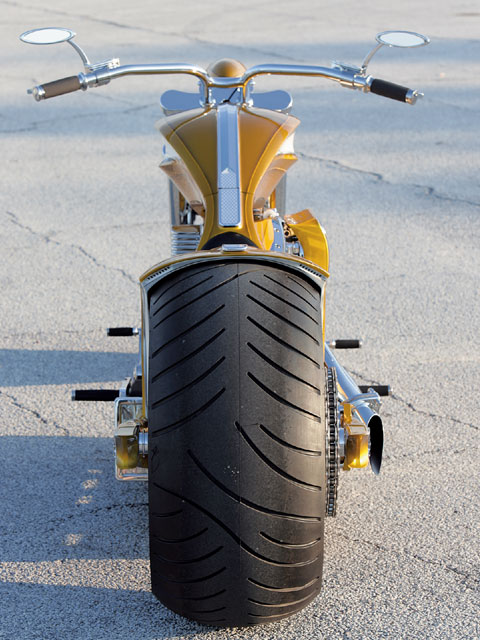 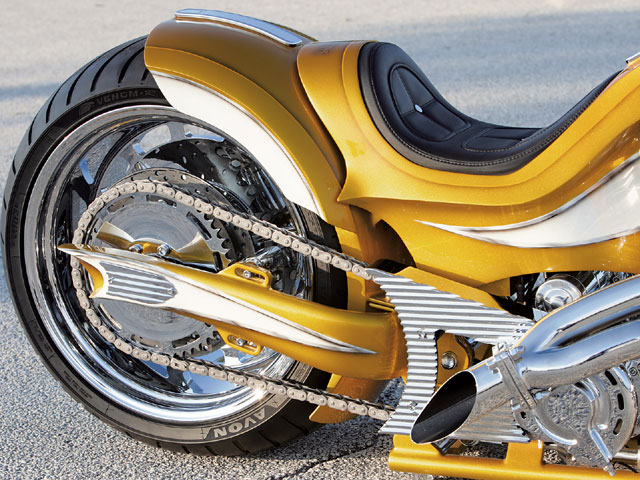 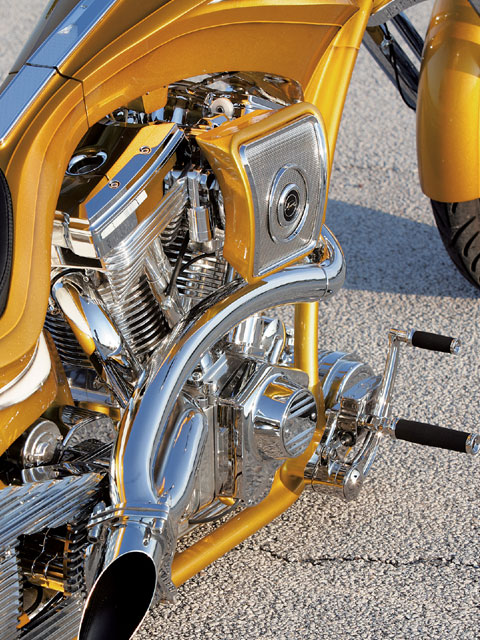 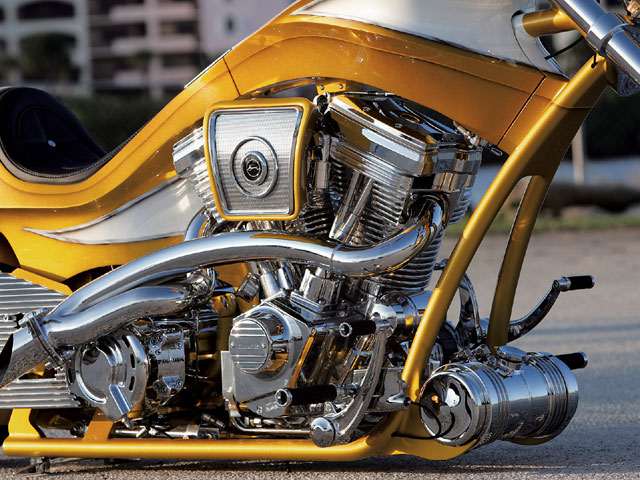 Riders, bikers, motorcycle enthusiasts, weekend warriors, posers, RUBs-whatever you want to call those drawn to the thump-thump-tater of a 45-degree, air-cooled pushrod motor-most people agree that bikes are cool. From all walks of life, the white- and blue-collar guys gather together at shops, shows, coffee houses, and backwoods watering holes to admire each other’s rides and talk about who built the scoot (or the monster motor, or even where you got that chrome geegaw). It’s a commonality of experiences and places that bring us all together. It’s not always easy to remember that not everyone was born with iron between their legs. Strange, how a rolling piece of metal has the ability to bring brainy and brawny people to a somewhat common ground.

Few will deny that riding takes us to places, both physically and emotionally, that are far away from the caged four-wheel world we left behind. This holds true for the everyman, the famous, and the outlaw one-percenter. Picturing ourselves on a one-off custom isn’t just in the dreams of your average bike-show attendee but transcends socioeconomic status. The bike you see here was the culmination of years of riding, attending bike events, and admiring custom bikes, combined with a proud cultural heritage.

Carlos Mencia, a lifelong bike enthusiast and professional comedian, was perusing custom sleds at a local bike show when he came across a bike that he fell in love with. The bike was the gold “Lucifer” custom, built by Covingtons Customs out of Woodward, OK. Carlos got to talking with Jerry and David Covington about buying the bike, but it wasn’t available. Right then and there, Carlos decided to write a check for a custom one-off of his own. One of the few requirements Carlos had for the build was the color; he wanted it to be the same golden color as the Lucifer bike. It sounded easy enough for the masters at Covingtons, except for one little detail: Carlos needed the bike in seven weeks.

You see, Carlos is the host of Comedy Central’s hit TV show Mind of Mencia, and he wanted to unveil the new bike on his show in Hollywood in front of a national audience. So the guys got to working, but not before getting a little history of Carlos’ life and style. Carlos, originally from Honduras, moved to the United States when he was a baby, with his family settling down in the largely Hispanic Maravilla projects of East Los Angeles. It was a tough place to live and an even tougher place to grow up, with the fear of the older kids turning him on to the gang culture and thug life that dominated East L.A. He turned to family (he’s one of 18 children) and school as his escape, as well as the thriving car and music culture of his neighborhood.

The Covingtons thought the lowrider theme, dominated by classic American cars of the ’60s, would be a good place to start with Carlos’ bike. They decided to incorporate styling cues from a ’64 Chevrolet Impala and, for added lowrider authenticity, use a suspension that could be raised and lowered with the flip of a switch. Already under the gun, the guys had to work overtime engineering the frame, frontend, and swingarm to accommodate the Viair compressors and the four Tricky Air-Billet solenoids used to operate the front and rear suspension.

First things first-a 6-inch stretched frame with 47 degrees of neck rake was designed by David and fabricated in-house. The bottom of the frame’s curved double downtubes would serve as a cradle for a handmade spun billet-aluminum oil bag. This design allows for lots of under-seat space (where the two air compressors and battery reside), while looking damn good in the process. Without much space for a tank to hold the air needed by the suspension, Covingtons designed the swingarm to act as the reservoir for the suspension’s vital 175 psi of air. The right side of the contoured swingarm has built-in rear brake caliper mounting bosses, while the left side is clean due to a drive-side rear brake system that doubles as a final drive sprocket. Up front, highly modified Tricky Air-Billet front forks were attached to Covingtons 5-degree raked triple-trees. The dual “shocks” located on the top of the 4-inch-over forks are controlled by air from the compressors and tank, thus allowing the ride to be tailored both for looks and ride quality.

For the sheetmetal, the Covington crew pulled out all the stops, not leaving a single detail of the bodywork unattended. A slick fuel tank was fabricated with a deep tunnel to sit low on the frame’s backbone. It flows into the seat-pan area and is fitted with the precision of a jigsaw puzzle while meshing perfectly with the molded frame. A short, wide rear fender was made and attached to the swingarm to ride close above the 300-Series tire. Two cutouts on the rear top edge of the fender would be used to contain the Eddie Trotta-designed LED lights. The guys decided to mount the front fender low and close, too, by attaching the custom mount to the leading-link axle. This way, even during riding the fender remains in constant proximity to the tire. All of the sheetmetal, as well as the frame and headlight bucket, was treated to a coating of Pagan Gold with off-white and silver graphics applied by John at Luckys’ 7. For extra attention and in keeping with the Impala theme, metal trim resembling Chevy fender trim was machined and added to the tank, rear fender, and swingarm.

A custom set of three-piece wheels was machined with an inner 12-spoke design. Separate solid rings and the tri-spoke inserts were made to resemble a classic Impala’s hubcaps and affixed to both wheels: a 21-inch unit up front with a wide 18-inch unit holding up the rear. Performance Machine hand and foot controls were attached to PM calipers through hidden brake lines contained within the handlebars and frame. Clean, wide handlebars with integral risers, two PM master cylinders, and Eddie Trotta mirrors were bolted to the top triple-tree.

Not wanting to diminish the quality of this build with any ordinary motor, the Covingtons decided to go with a powerful Patrick Racing (PR) Evo-style motor. PR round billet cylinders filled with J&E; pistons highlight the 113-inch mill. Up top, PR heads with Manley valves and JIMS rockers and boxes are fed via JIMS pushrods from the PR cases filled with a PR crank assembly. The air/fuel mixture comes from a 42mm Mikuni carb with a custom-made air cleaner fabricated from an actual ’64 Impala speaker grille. Two stepped header pipes culminate in a trick, bolted-on endcap that begs to be ridden hard while barking a melodious, thumping exhaust note. All of the power is transferred to the right-side-drive six-speed tranny through an open primary covered by a ribbed cover, made by Covingtons, with the Impala logo.

After an arduous seven weeks, the Covingtons crew brought themselves and the finished bike to Mencia’s Hollywood studio for its unveiling. For fun, Carlos held a mock biker build-off competition between his bike and one that had been built by scavenging some of East L.A.’s finest lawnmower parts. It was a joke-after all, the man is a comedian. His Impala bike won the “competition” hands down. Carlos is really happy with how the bike turned out and how the Chevy theme really sets it off. He and the bike can be seen all over town, just cruising or parked at the local comedy shops.