A stripped down XL 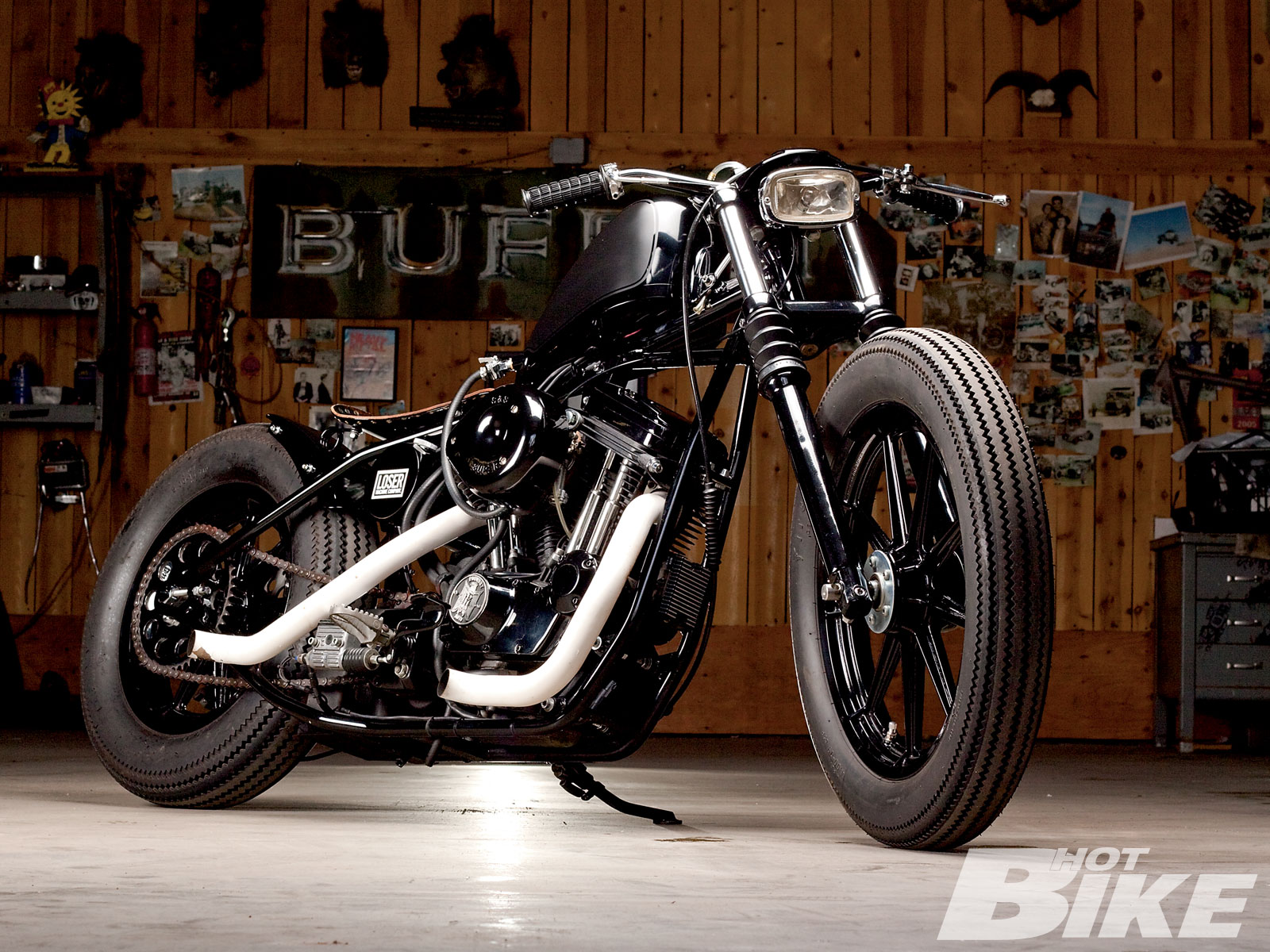 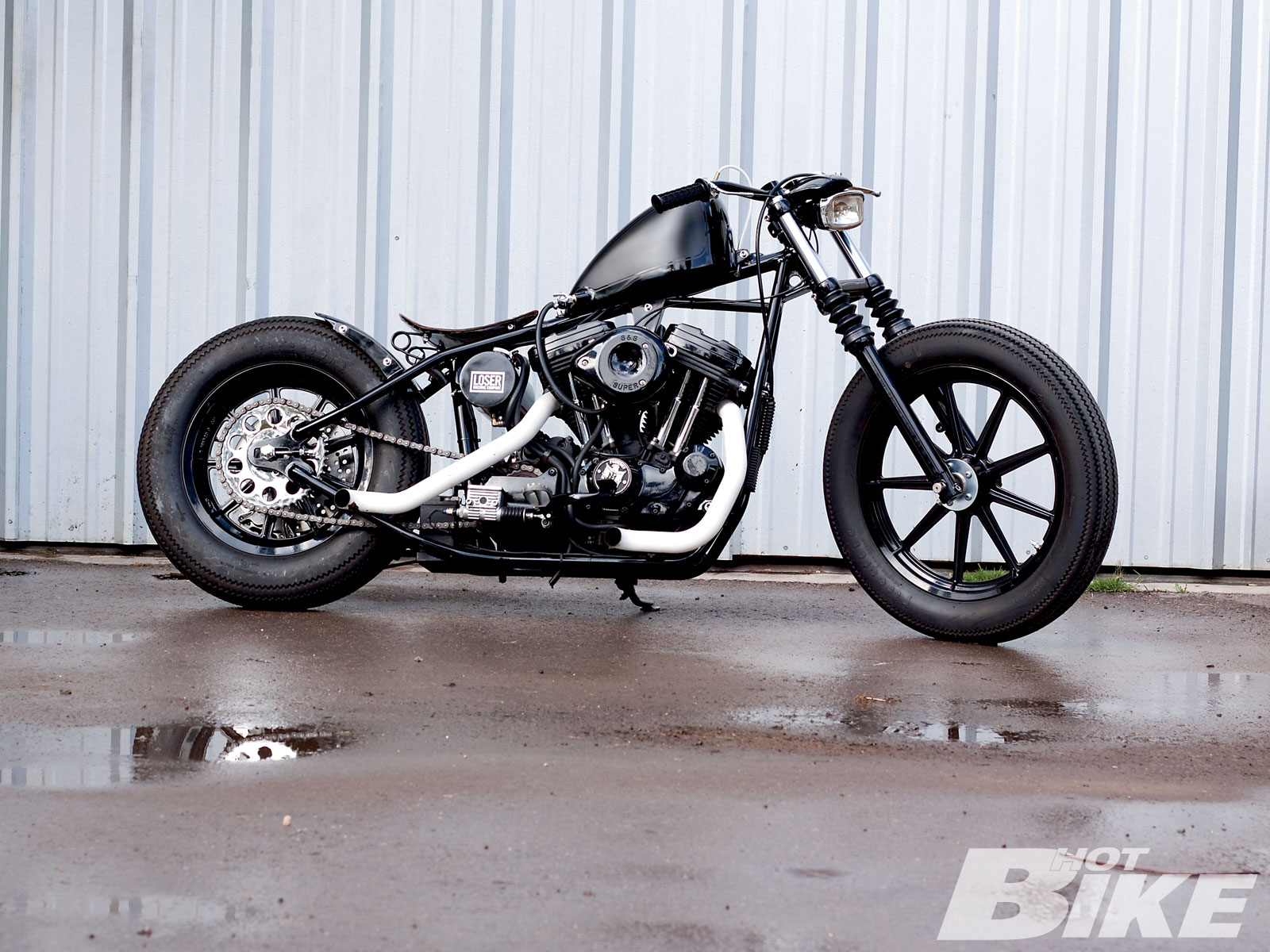 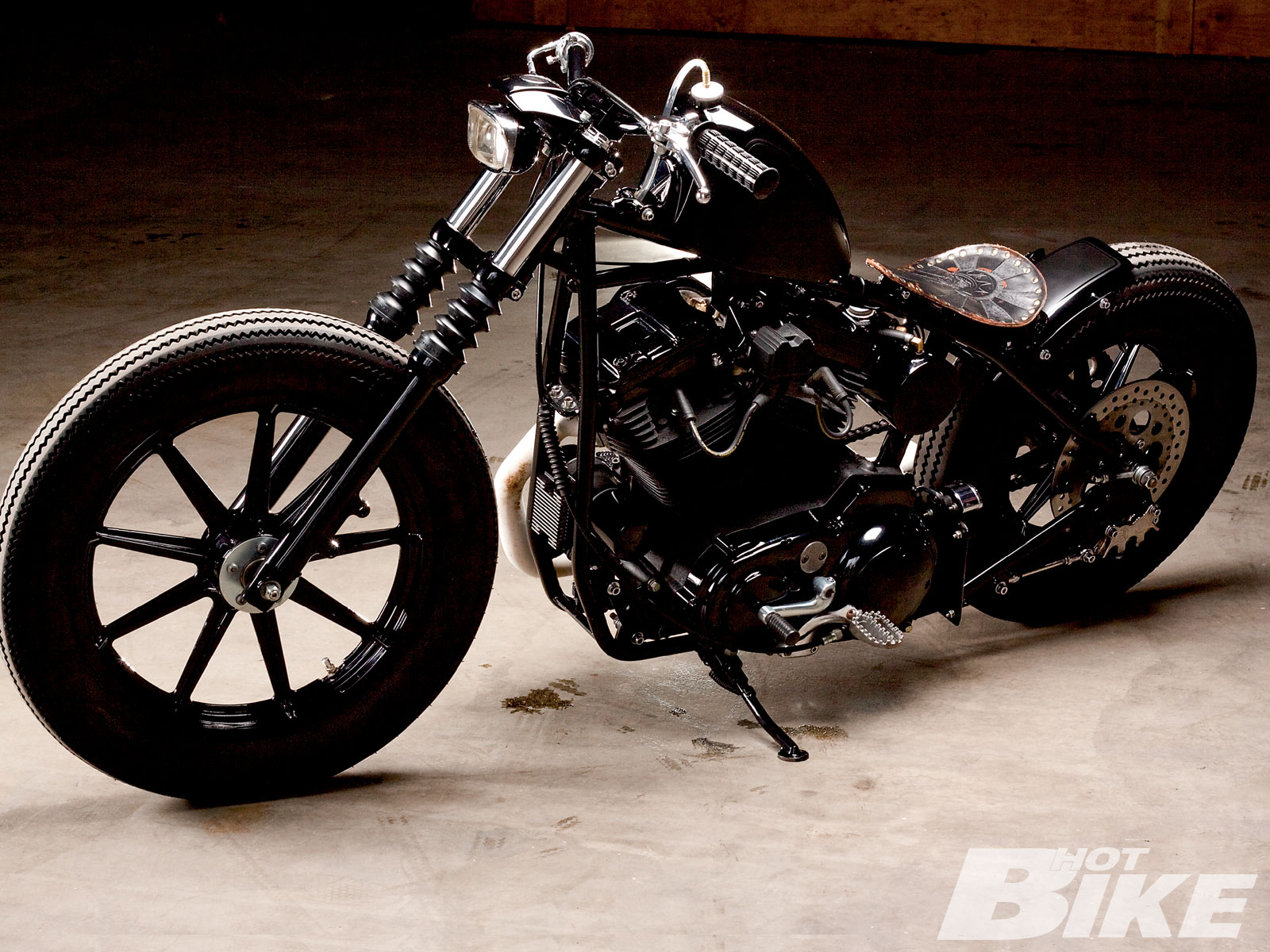 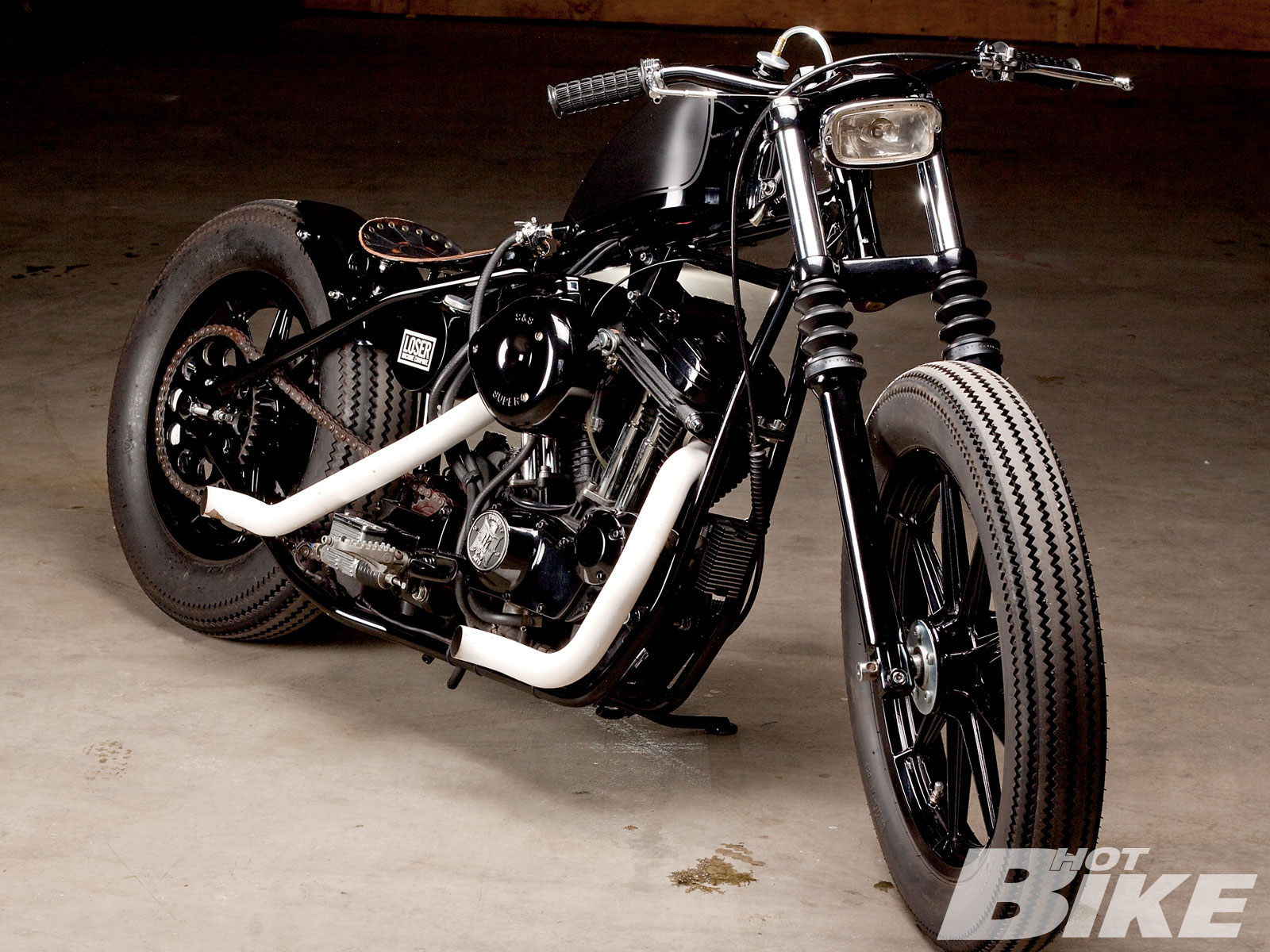 The white pipes are a stark contrast to the mostly black bike, but are a nod to Tanner’s gasser-style, dumped and chopped ’29 model A. 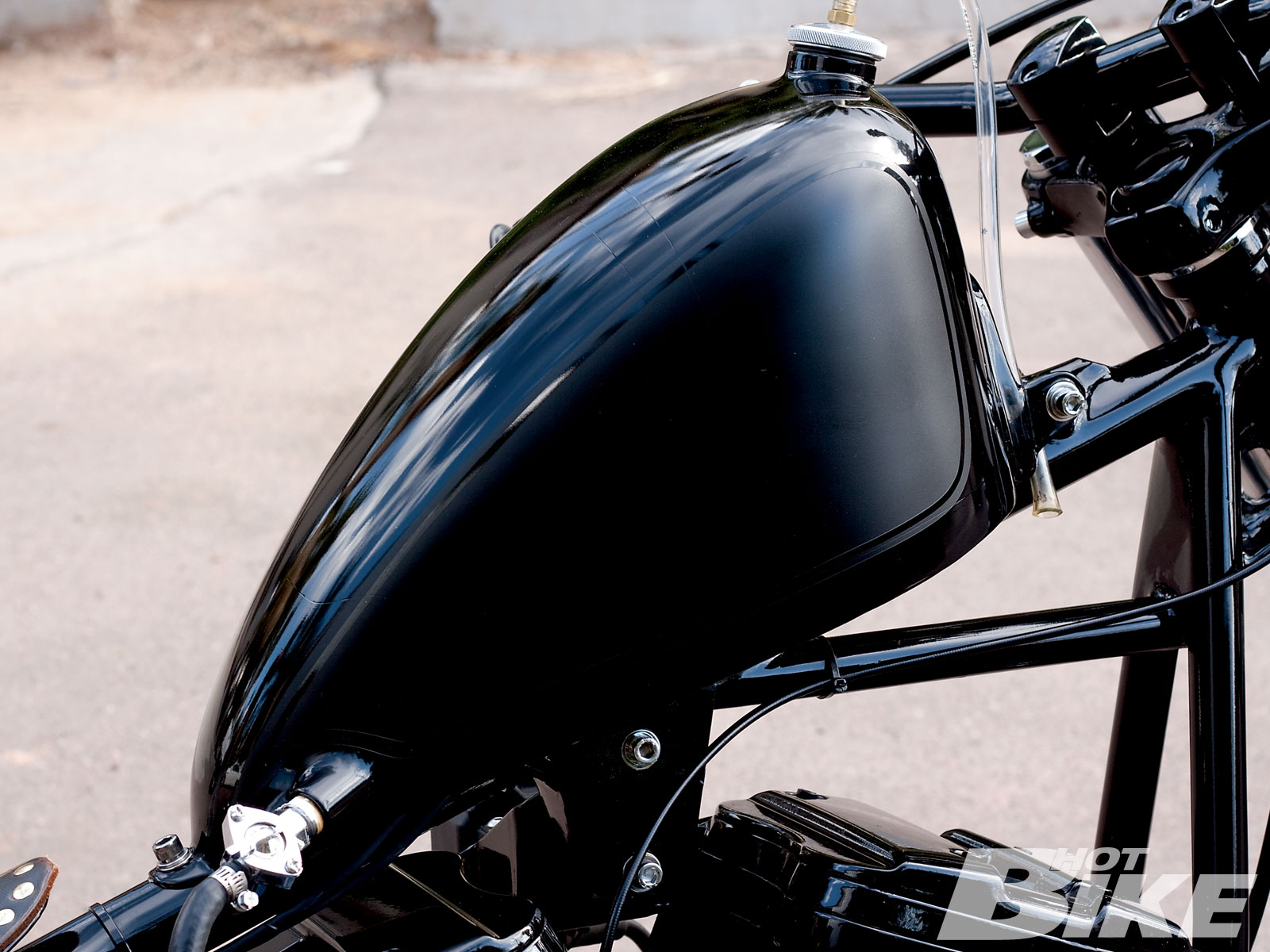 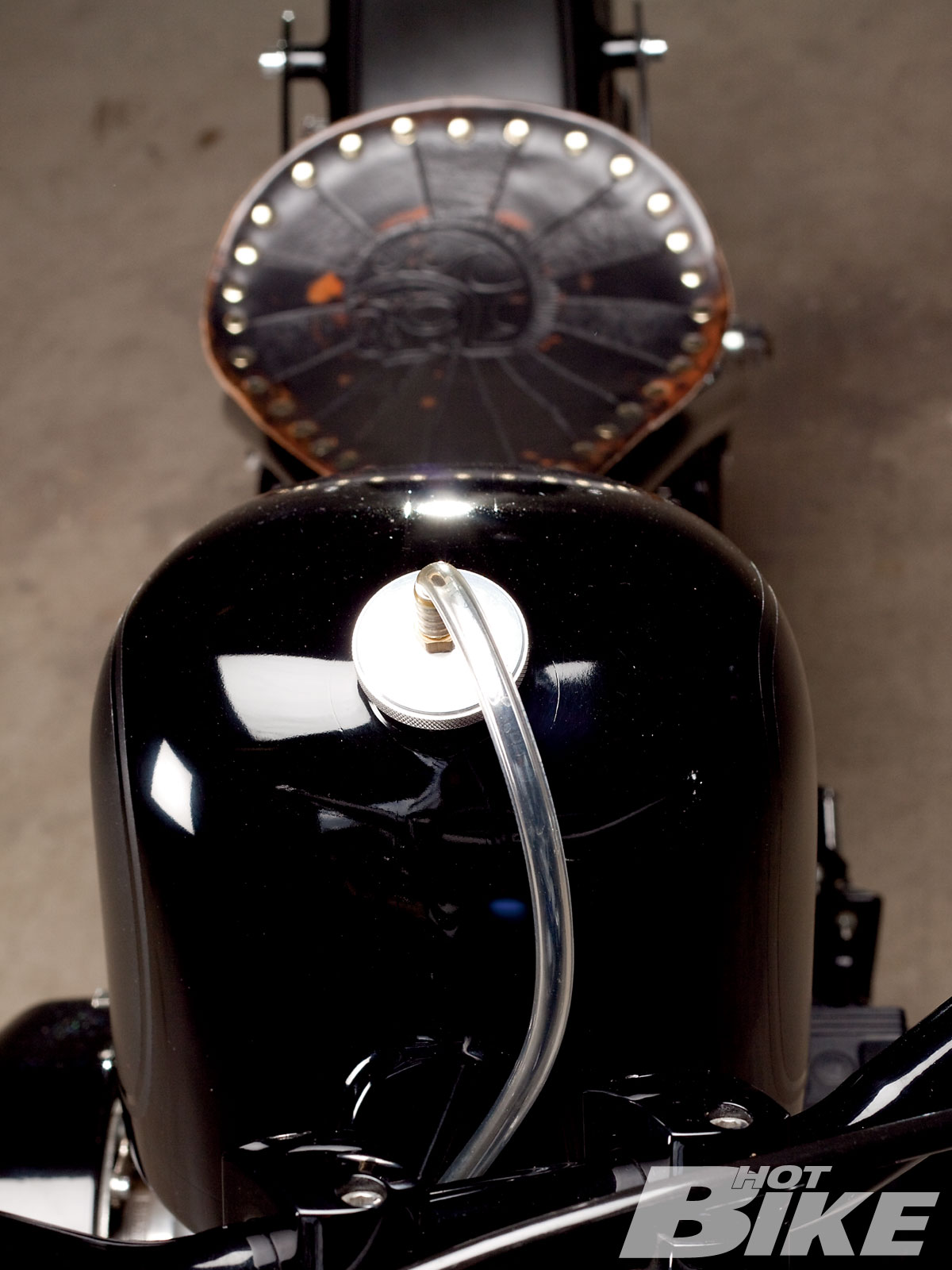 Foundry ran a motocross-style vent off the top of the gas cap. 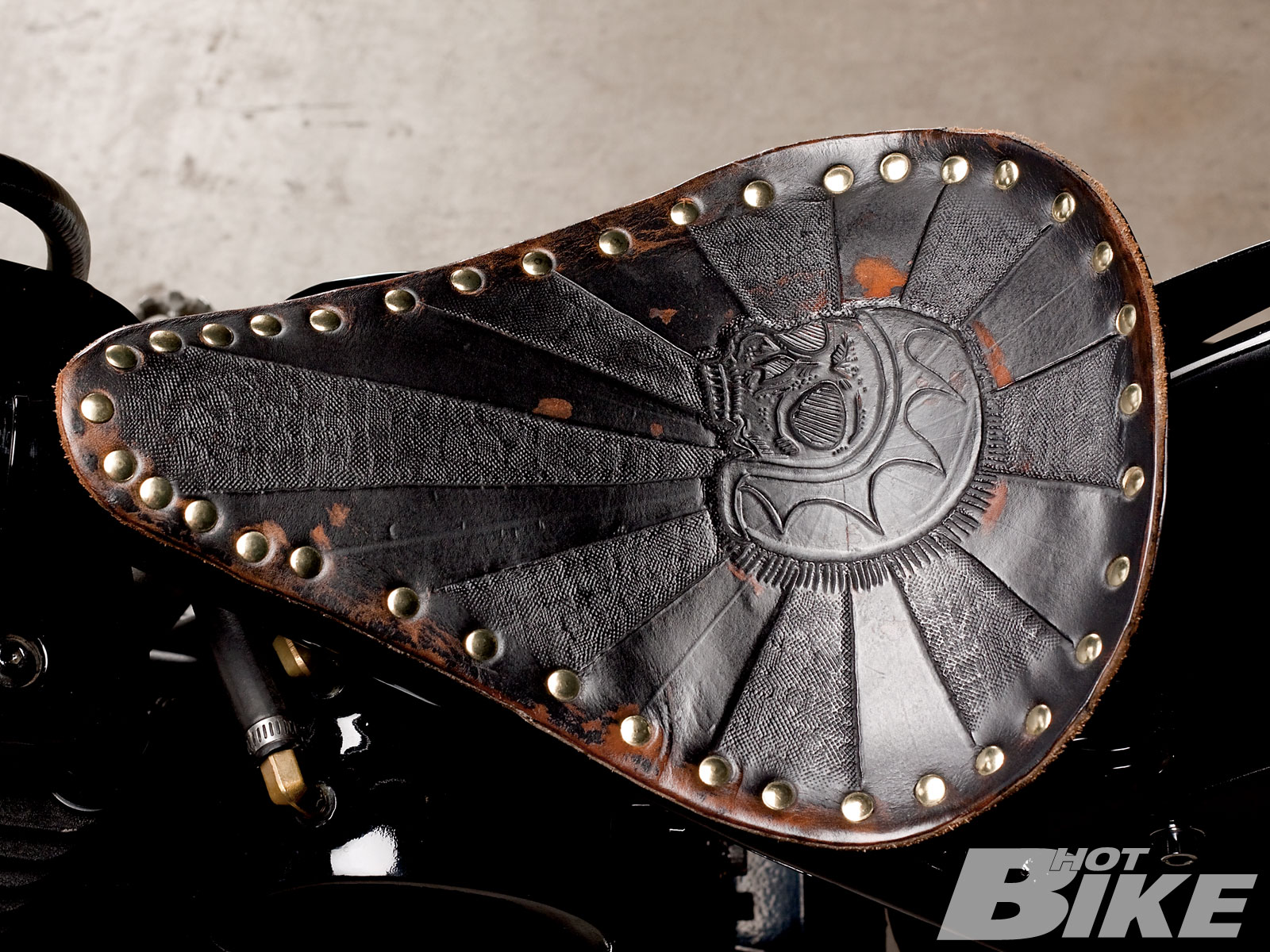 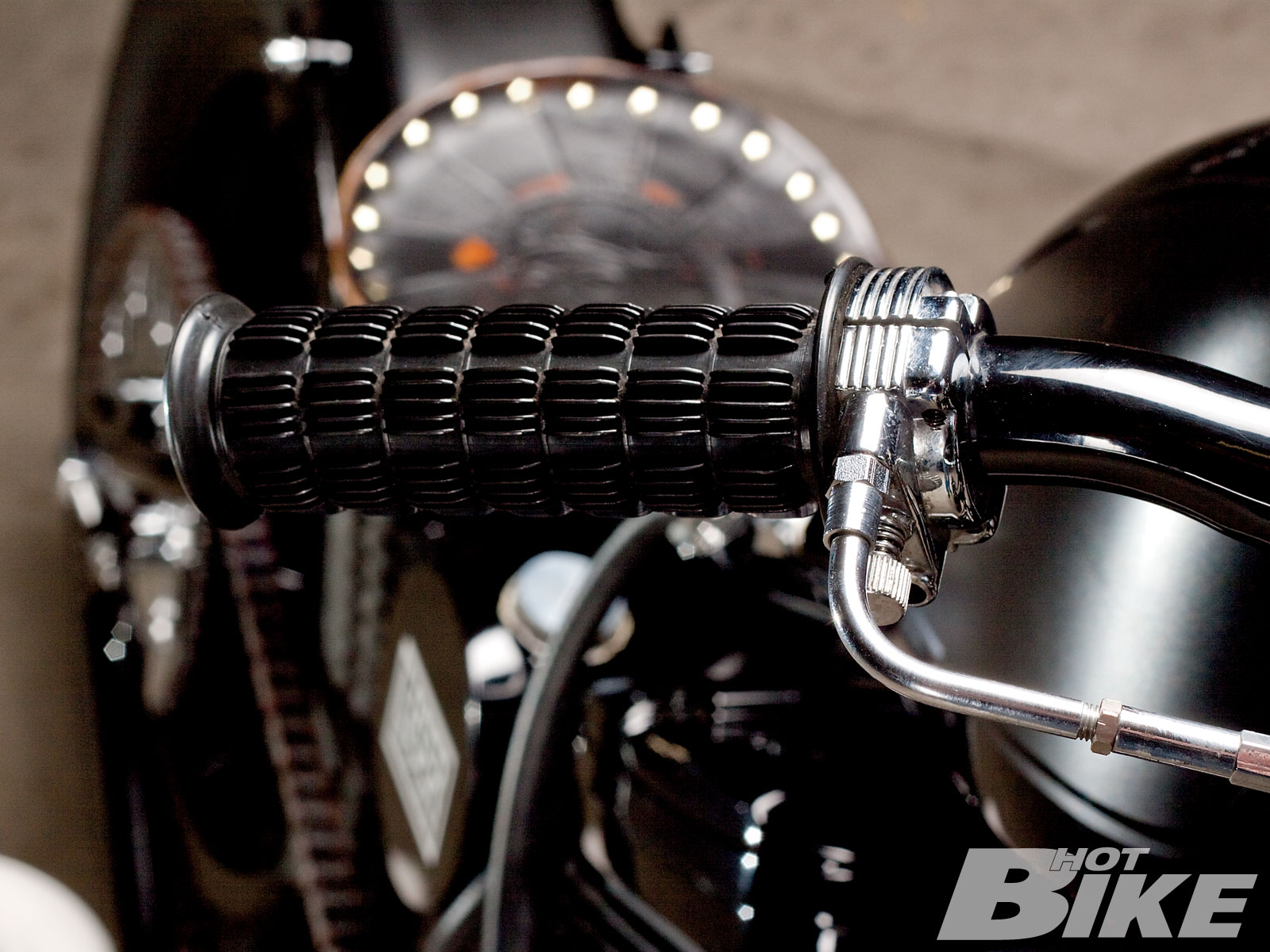 “I thought I was going to end up as the shop gimp tied up in their basement.” 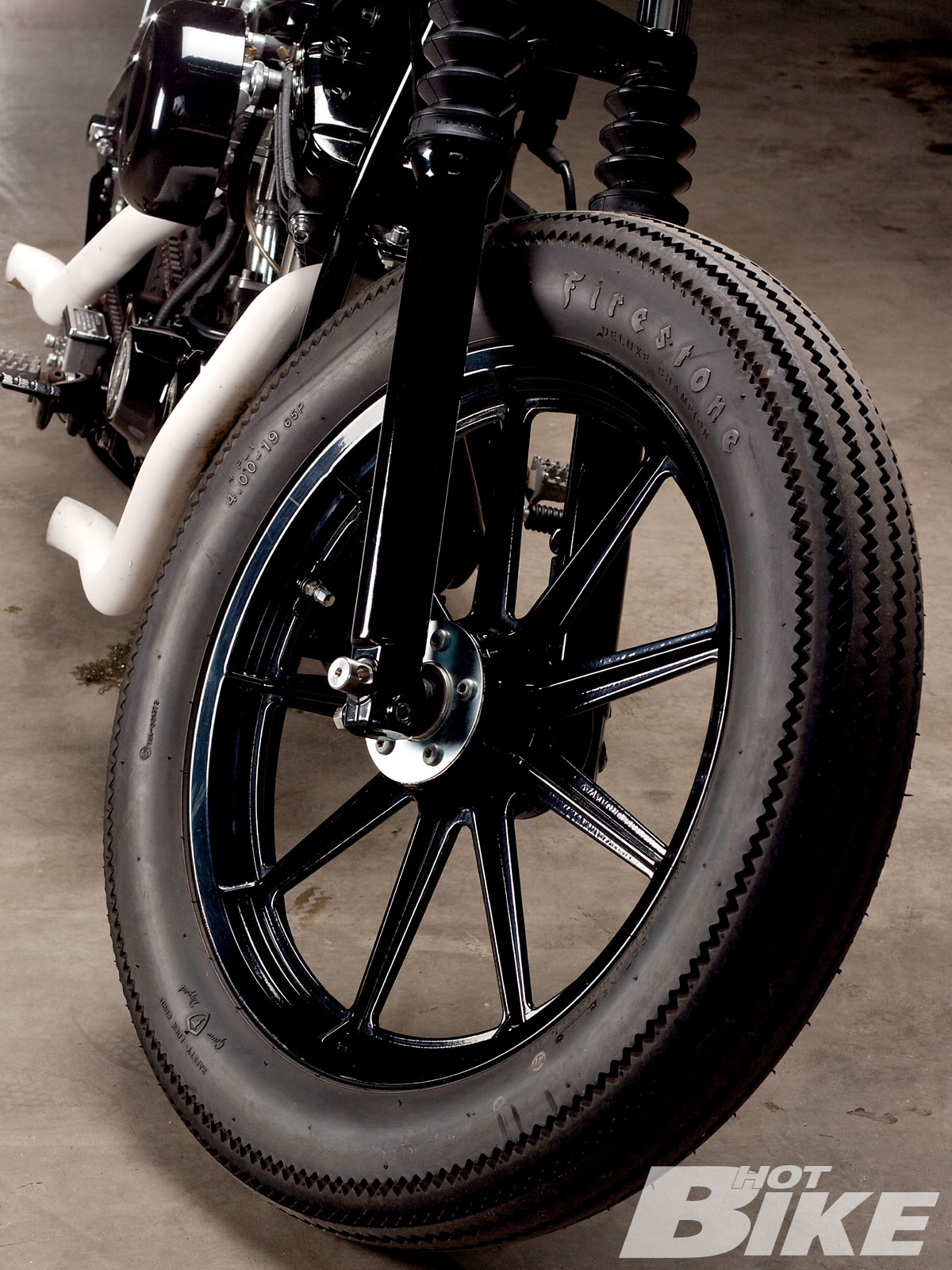 In the skateboarding and snowboarding scene, it’s all about pushing yourself to go faster and bigger. The problem is, this often leads to faster and bigger slams. But then that’s all part of the love and passion people have for these sports.

You can’t have a striped-down, aggressive-looking bike like this without making sacrifices. This bike’s owner, Tanner Irion, summed it up perfectly quipping, “You have to pay to play,” when we asked him about riding this balls-out, black-as-night, XL-powered street menace. And anytime Tanner puts more than a hundred miles on his bike he’s reminded of the sacrifices he’s made to have such a killer machine. But he wouldn’t have it any other way. “I’ve been on a 400-mile ride on this bike. Yeah, you definitely feel it. Your body aches. The guys I rode with thought I was crazy. It’s not for everybody and that’s what sets the bike apart from the rest.”

Tanner grew up slashing across the coping of empty pools on his skateboard and plowing through plush piles of fresh powder on his snowboard. To mix things up he would add some two-wheel mayhem into his adrenaline fix and rip up muddy motocross tracks. Unfortunately a couple of Tanner’s motocross buddies were seriously injured or killed, which led to Tanner’s wife convincing him to sell the dirt bike. Still wanting to feel the thrill of two wheels, Tanner made good on his dream of always wanting a Harley and followed one of his skateboarding buddies over to Foundry Moto.

“The first time I went to the Foundry shop was sort of sketchy. It’s in a shady part of Phoenix and when I walked up, there was this massive dog on a short chain going nuts at all these chickens running around. Then this guy walks up from the back of the shop, grabs a chicken by the neck, and tells me to follow him. We walk to the back of the shop and he tosses the chicken into this cage with an alligator and we just walk away. It was pretty crazy. I thought I was going to end up as the shop gimp tied up in their basement.”

As they say, “You always want to make a good first impression,” and right off the bat Tanner knew that the Foundry Moto crew had the right mix of out-of-the-box thinking and live-fast mentality to build the bike he was thinking of.

“I wanted the bike to have an old-school flat track racer feel,” Tanner told us. “I wanted it to be tight, responsive, and quick, just like riding a skateboard or snowboard. I also wanted it to be stripped down and stealthy. I’m not into flashy chrome bikes.”

After discussing his ideas of a moto-inspired pavement ripper with the Foundry guys, Big Chris, Danny G, Robbie, Rudy, Matt, and Jay, they came to the conclusion that the 883XL engine and Paugcho rigid frame they already had on hand would fit the build perfectly. From that point most everything else was fabricated or modified in-house. While Rudy was busy slicing and dicing the bottom of a sporty tank so that it could be frisco-mounted on the backbone and making a custom barrel-style oil bag, Jay was busy tearing the mill apart to bump it out to 1,200 cc. Tanner brought in his favorite set of Renthal motocross bars, and Rudy replicated the bends of the 7/8-inch bars perfectly with some 1-inch tubing. The rear of the frame was kept simple yet still served a purpose as Rudy fabbed a pair of mini struts, then added a short rear skirt in an attempt to keep some of the road debris out of Tanner’s crack. A set of take-off Mag wheels, Harley mids with Moose Racing alligator pegs, shaved 39mm legs, some throwback Hunt-Wilde bicycle grips, a rectangular KC headlight, and for a true motocross look/feel, a Baker chaindrive conversion kit were added. The build wrapped up with a deep gloss-black base set apart with some matte black paneling done in-house by Chelene, and a piece of hand-carved cow skin by Robbie that was riveted to a super-thin pan.

“Waiting four months seemed like an eternity for the build to be complete,” Tanner commented. “Making weekly visits to the Foundry was rough. Everytime I stopped by, all I wanted to do was take it home, or at least on a testride. The hardest part was during the shakedown stage after final assembly. I wanted to be the one to shake out all the problems, but for some reason Rudy wasn’t having it. I guess I found out why when I prematurely took the bike out for a long ride and the handlebars almost came off in my hands. Is that bad? Now that it’s complete, I love riding it. It’s like sessioning on a skateboard or snowboard. It’s really narrow, super responsive side-to-side, and quick. It’s definitely not a pig or slow to react. The Foundry boys killed it, and I owe them all a big thanks.”