Keeping your cool for summer riding 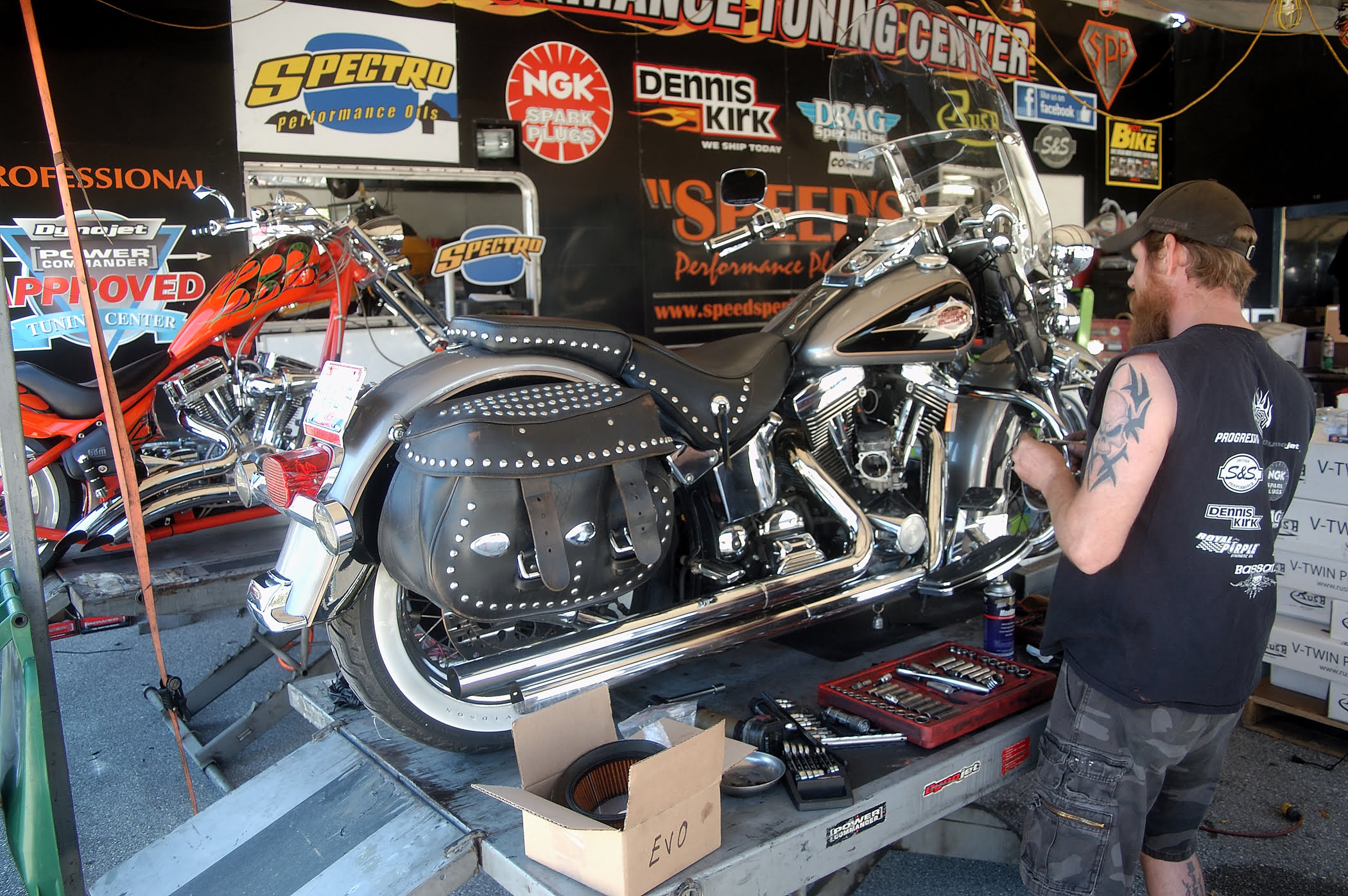 The warm-weather riding season—really warm weather in some parts of the country—comes with a price. All the engine and exhaust heat wafting up from that V-twin, on late-model bikes especially, can get almost unbearable. “And we hear that complaint all the time,” Jason Hanson of Speed’s Performance Plus says. Riders soaked in sweat will roll up to the SPP mobile shop pleading for help, anything to beat the heat. Well, over the years the guys at SPP have come up with a multi-pronged approach to significantly cool things down. Now, just how serious you are about ensuring the summertime comfort of both you and your passenger or how acute the heat condition is on your particular bike, you can consider one or all of the steps the SPP crew has come up with. But bear in mind: The full package really does make a significant difference for the better.

Number one is getting the engine tuned correctly. Seriously. If you haven’t already had that ECM and its air/fuel ratios remapped, do it. Late-model Harleys are calibrated way too lean, and a lean motor runs hot. A richer, cooler-running fuel mixture can go a long way toward beating the heat, not to mention what it can do for improvements in all-around rideability. “And with the Power Commander and AutoTune,” Jason says, “for those really severe heating cases, I can set things even a little richer than I normally would in the cruising ranges.” Sure, you’ll give up a little fuel mileage there but your engine and you will stay a lot cooler a lot longer. Next, if you haven’t already made the switch to full-synthetic oil, do that. An air-cooled engine is also oil-cooled, and running a full-synthetic like the Spectro Performance Oil SPP likes not only lubricates better and lasts longer but it can drop engine temperatures an additional 15 to 25 degrees, another step in the right direction. “And a good move here,” Jason says, “is to also screw on one of those washable and reusable metal-mesh oil filters, the ones with a finned aluminum canister.” Not only will that be the last oil filter you’ll ever buy, but the finned aluminum canisters effectively turn the filter into a combination oil filter/oil cooler further lowering temperatures.

So far so good, and everything recommended so far will do a world of good for the motorcycle and the enjoyment of riding it. But finally, Jason says, switching exhausts can be a huge help, and the aftermarket has plenty to offer here, reconfigured head pipes and full systems all aimed at cool running and added performance. “And one of the newest on the market is the Rush Racing pipes,” Jason says. “Besides everything else they have going for them, performance enhancements like stepped headers, for instance, those Rush pipes are ceramic coated inside and out, and, boy, does that make a difference.” Rush’s own testing has shown temperatures drop 300 degrees cooler than any other full system on the market, and nothing SPP’s seen disputes that. “And lowering exhaust-pipe temperatures by that much,” Jason says, “is something you’re going to feel immediately.

We’ve been putting those Rush pipes on for a while now and riders love them.” And just like everything else mentioned so far—the tuning, the oils, and the filter—the right pipes, like those Rush Racing pieces, can do more than just make a bike cooler and more comfortable in the summer. There’s also a significant performance boost to be had here, 15 percent or better in many cases. Hey, Chaz Kennedy, NHRA Pro-stock phenom, uses Rush pipes on his racebike, and they aren’t there just to make his quick rides down the quarter-mile a little cooler.

Late-model Harleys run hot, but they don’t have to stay that way. You can start small with a tune-up then switch to synthetics and then move up to the other steps as needed, or you can do it all at once. Your choice, your budget. Either way, next time you see that big black SPP truck at an event, stop by and have a talk with the guys about making those warm-weather rides a lot more comfortable.

More advice from Speed’s Performance Plus.