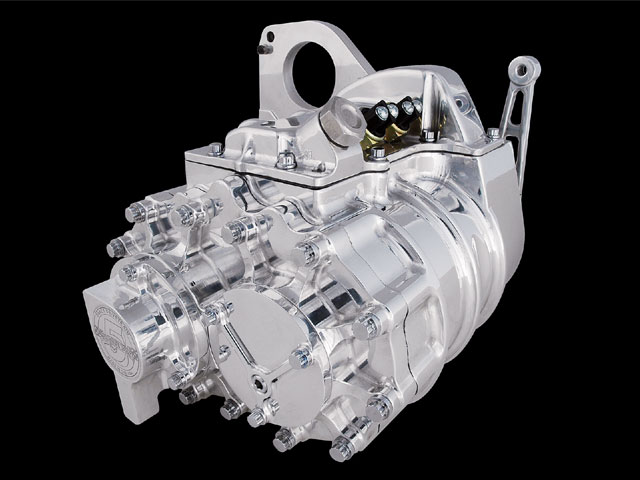 Here at HOT BIKE, we strive to stay on top of the most innovative parts to hit the American V-Twin industry, so we’re bringing you a new tech piece entitled “First Look.” With this series, we will search out the newest parts and get you the inside scoop on what they are and how they work. Then we will follow up in a future issue by actually installing the part(s), explaining the install process, and giving an evaluation.

Bert Baker, of Baker Drivetrain fame, is a riding encyclopedia of everything transmission. His previous gig as a senior project engineer with General Motors concentrated on automotive manual transmissions. In a nutshell, one of the many things Bert knew was that a transmission’s capacity to handle torque was directly related to the width of the gears and the center distance between the main- and countershafts. An increase in the center distance allows for larger-diameter gears to be employed.

For decades, the OEM V-Twin transmission has remained largely unchanged. It was designed for motorcycles that at the time put out 50 hp and torque in the 60s-if you were lucky. The distance between the mainshaft and countershaft was 2-1/2 inches, which put physical limitations on how large the transmission gears could be. Although fine for moderate power, in high-output motors, a further weakness could be found in the cast-aluminum transmission case. It has worked great for many years for H-D and other aftermarket transmission companies, but today’s big-inch motors can reliably make power and torque well above 150 hp and lb-ft.

Bert studied the issue and set out to redesign the H-D-style transmission with the capacity to transmit 250 lb-ft of torque to the rear wheel. In order to do this, he had to throw out the old notions of how to design and build a tranny. Bert and his team used sophisticated computer modeling to create three-dimensional virtual transmissions that could be studied and modified before ever making a “real-world” transmission. At the end of the development process, Bert’s new design would employ larger, wider gears along with a new 3-inch shaft-to-shaft distance. This major change necessitated the redesign of the transmission case itself with the ability to fit in with current mounting, starter, and clutch placements. Refinements were incorporated into the shift drum, shift forks, and all associated parts to create the strongest transmission available.

Baker Drivetrain sent us photos to illustrate many of the highlights of its new Torquebox transmission, which is available with both five and six-speed gearsets for Softails and custom applications.