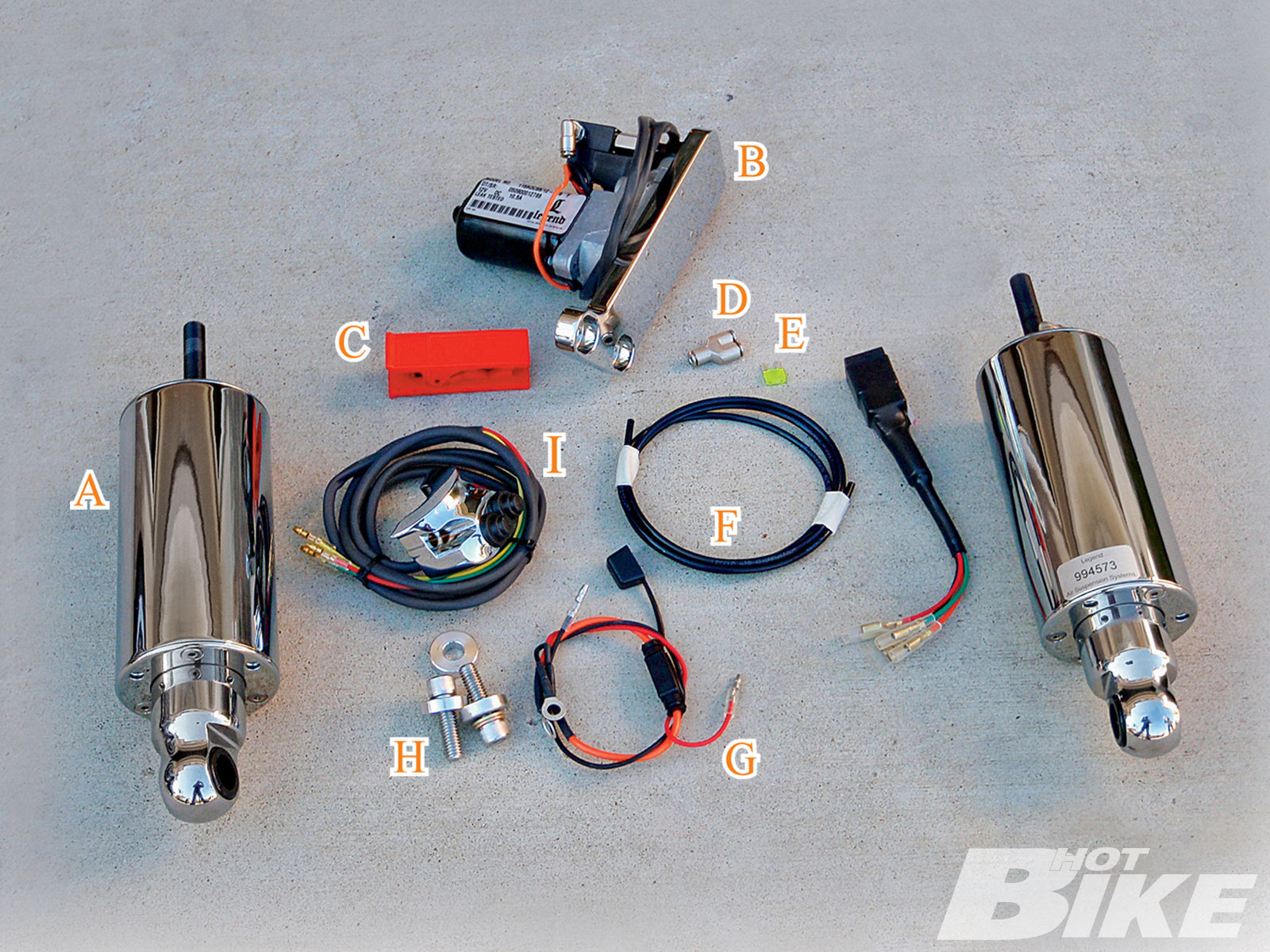 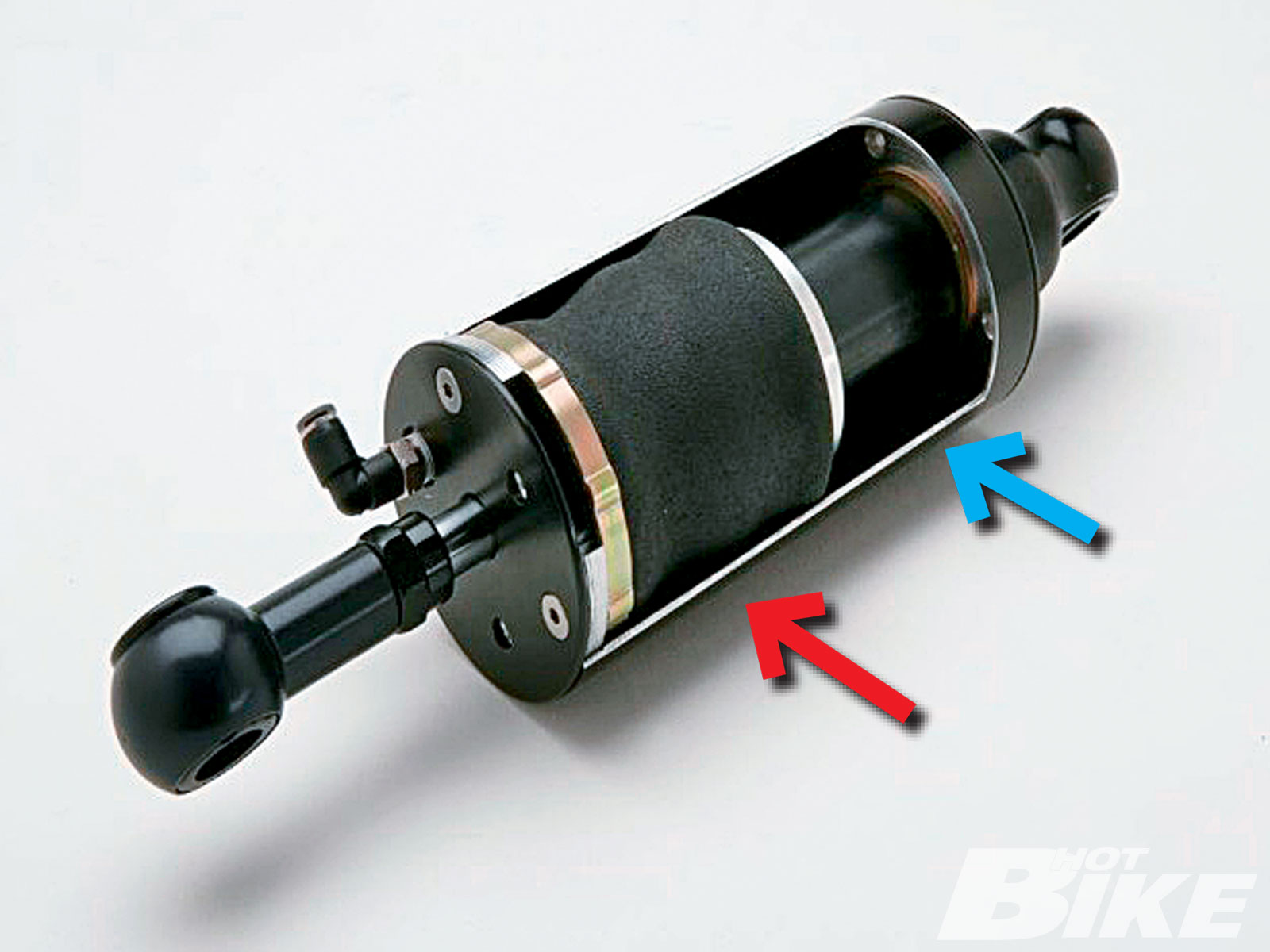 02. Here’s a cutaway of a pre-’00 L9 shock. This is the compact Kevlar-impregnated air spring (red arrow). Inside the shock body (blue arrow) is the oil and deflective disc damping system, which provides a smooth ride and great handling. 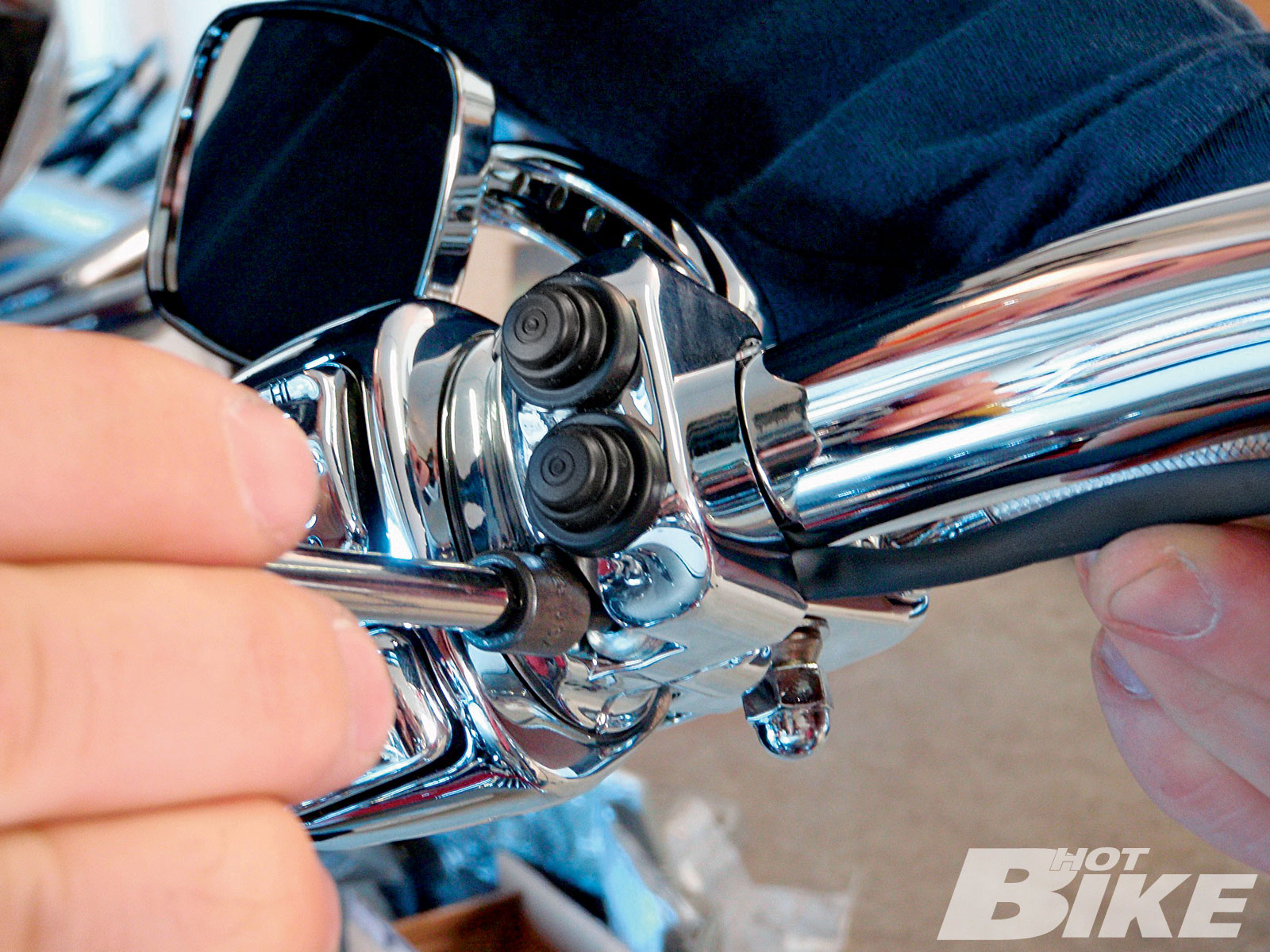 03. After securing the bike to the lift and placing a jack under the frame, we removed the stock clutch clamp. In its place we mounted Legend’s handlebar switch assembly. Legend’s offers these for standard 1-inch bar fitments as well 1-1/4-inch fitments such as these beach bars. It’s a simple two-button setup-the top button adds air, and the lower button releases air. 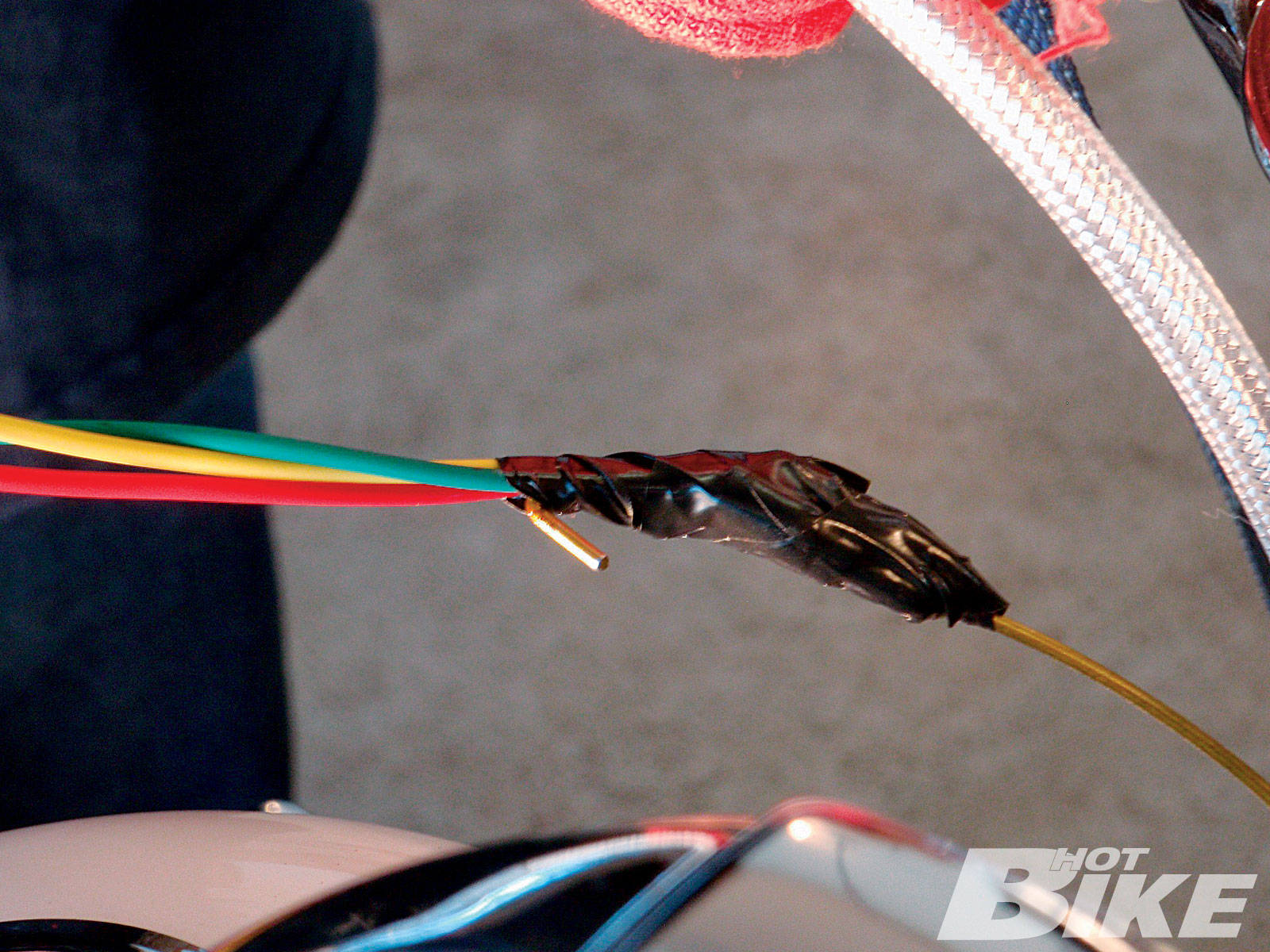 04. Next, we had to route the wiring leads from the switches to the battery compartment under the seat. We ran the leads along the bars to the front of the gas tank and then wrapped some tape around the wire ends and a coat hanger so we could pull the wires under the gas tank and along the backbone. Removing the front and rear tank mounts made this step much easier. 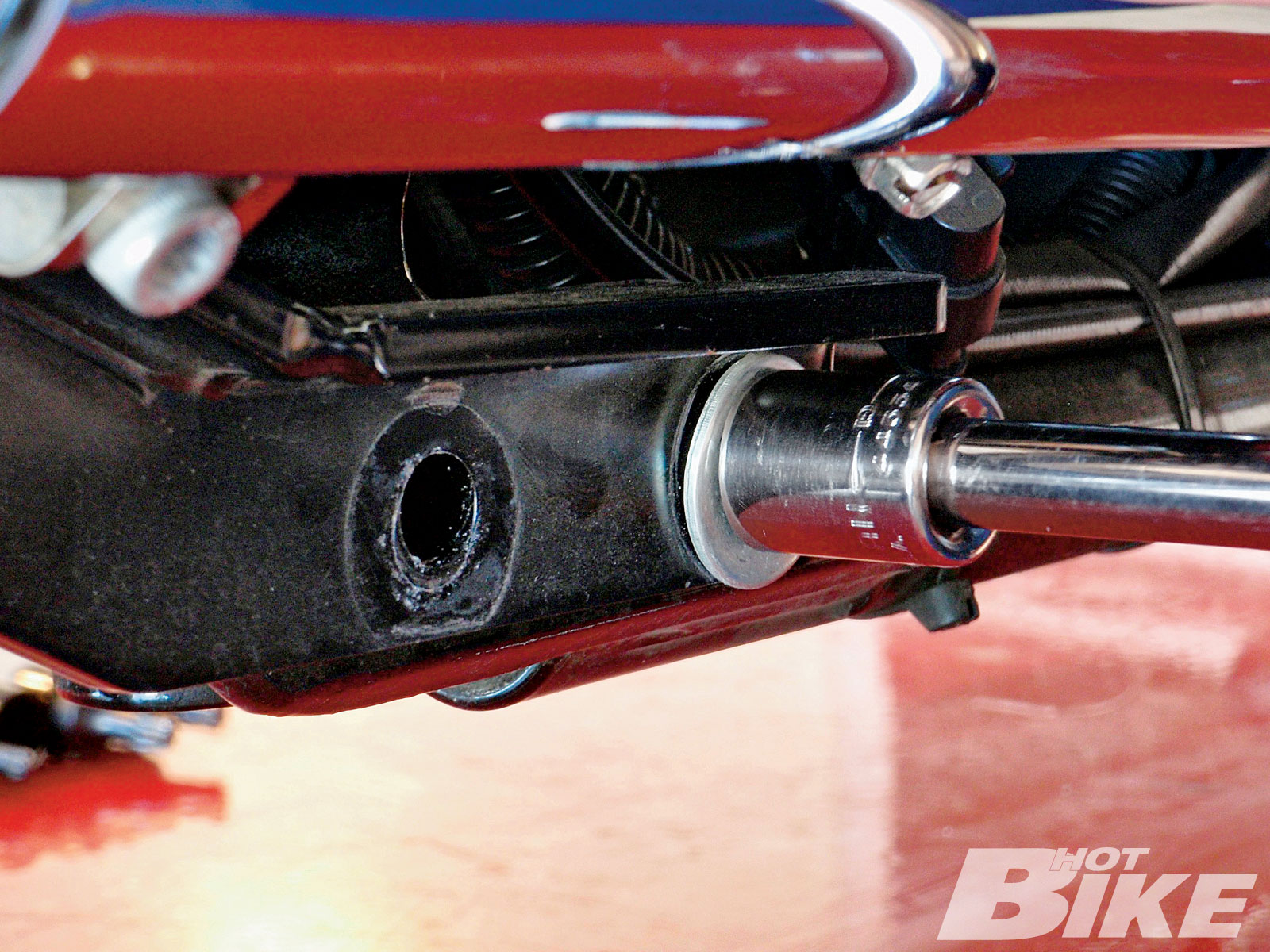 05. With switch wires at the battery box, we loosened the exhaust at the heads and removed the two exhaust mount bolts from the right side of the frame. 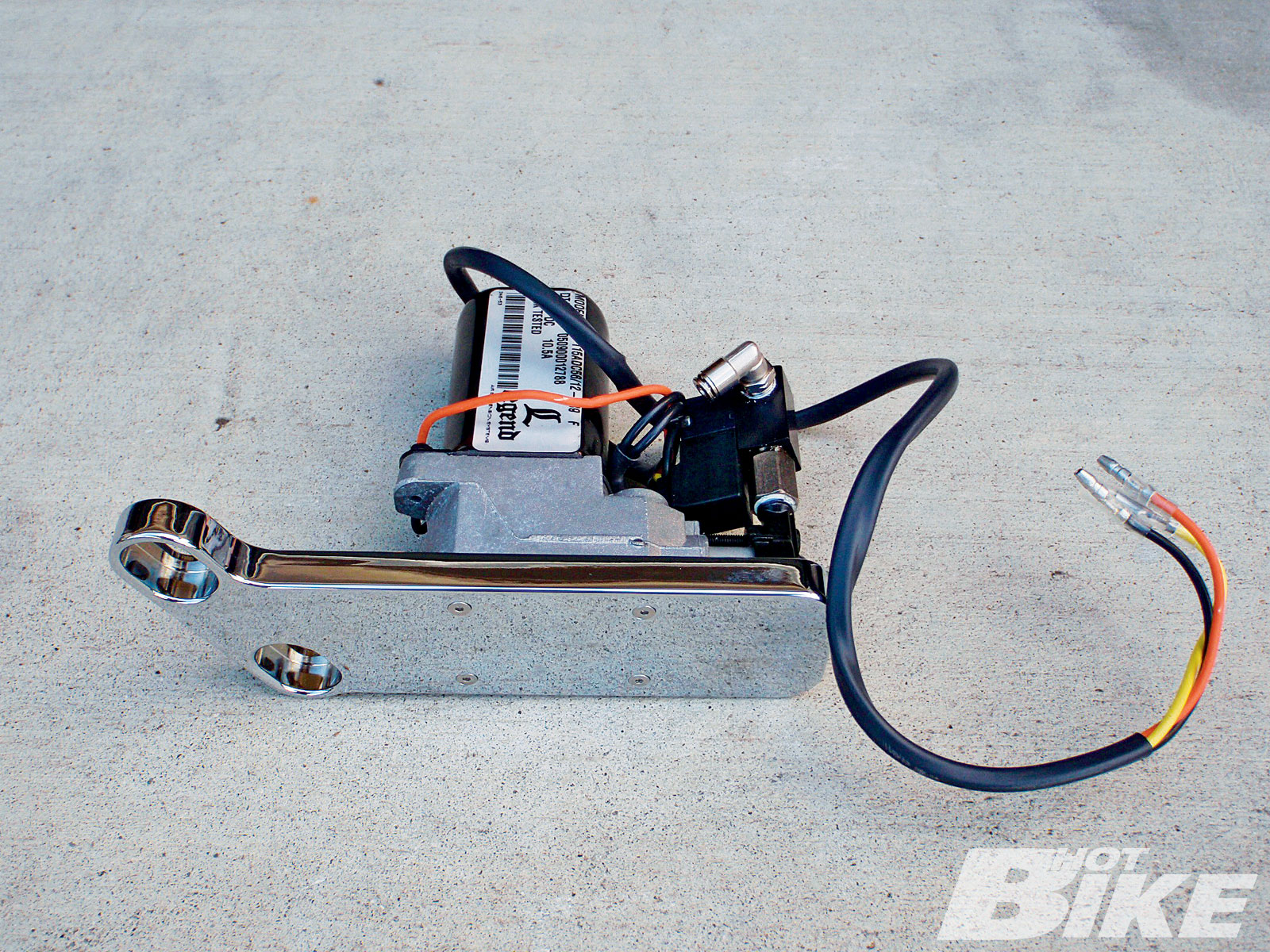 06. Legend’s utilizes a Thomas air compressor that’s secured to a LAS billet mount. The compressor fits into the inside of the frame area behind the transmission and in front of the right swingarm side plate. 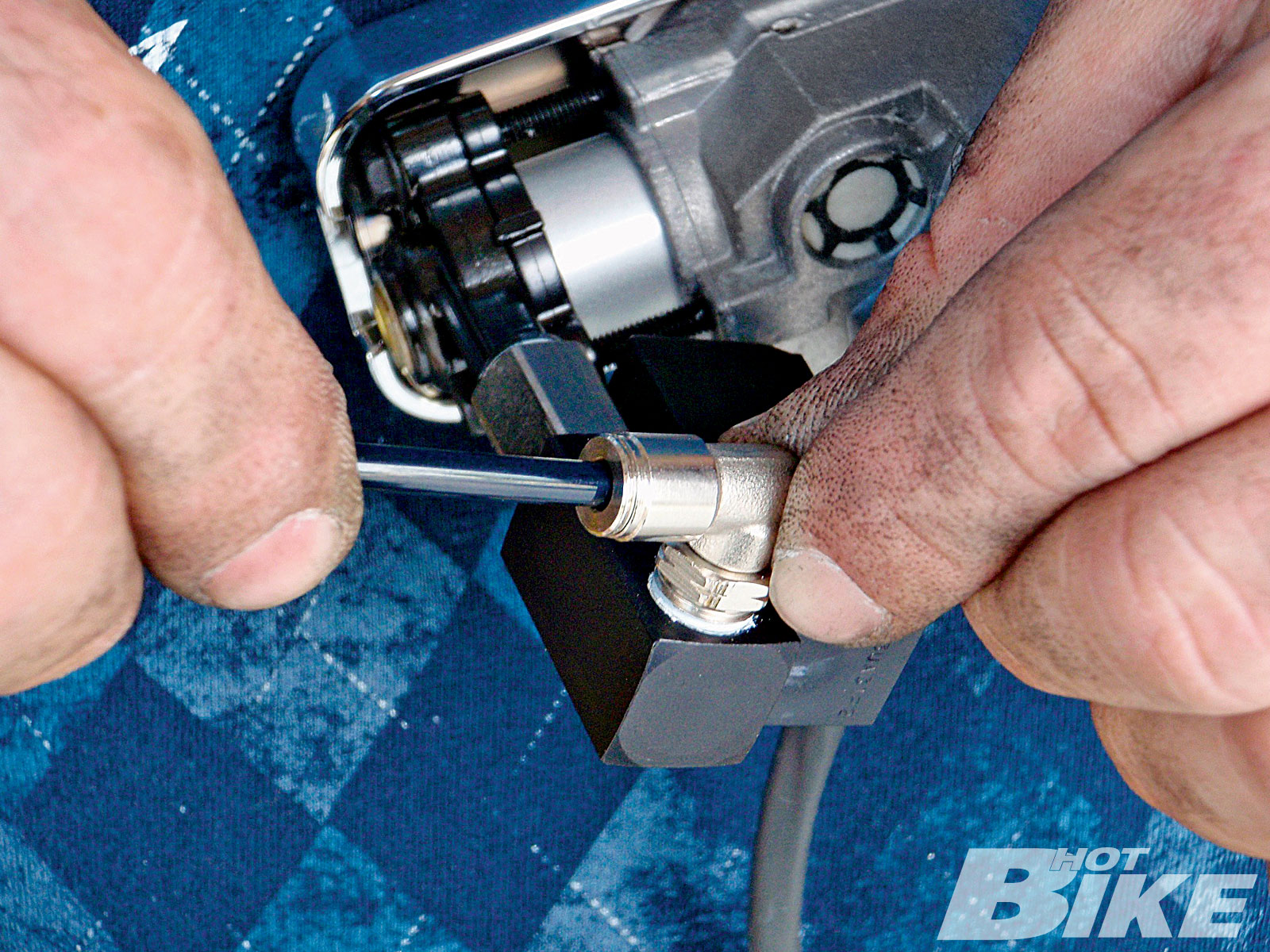 07. Next, we plugged one end of the airline into the 90-degree fitting on the compressor. The airline fittings are push-to-connect fittings, so you simply push the line into the fitting until it bottoms out and it’s secured in place. If you need to remove or replace the airline you just push down on the fitting collar and pull the line out. Legend’s uses 5/32-inch (4mm) high temp and high burst airline to help prevent failure. 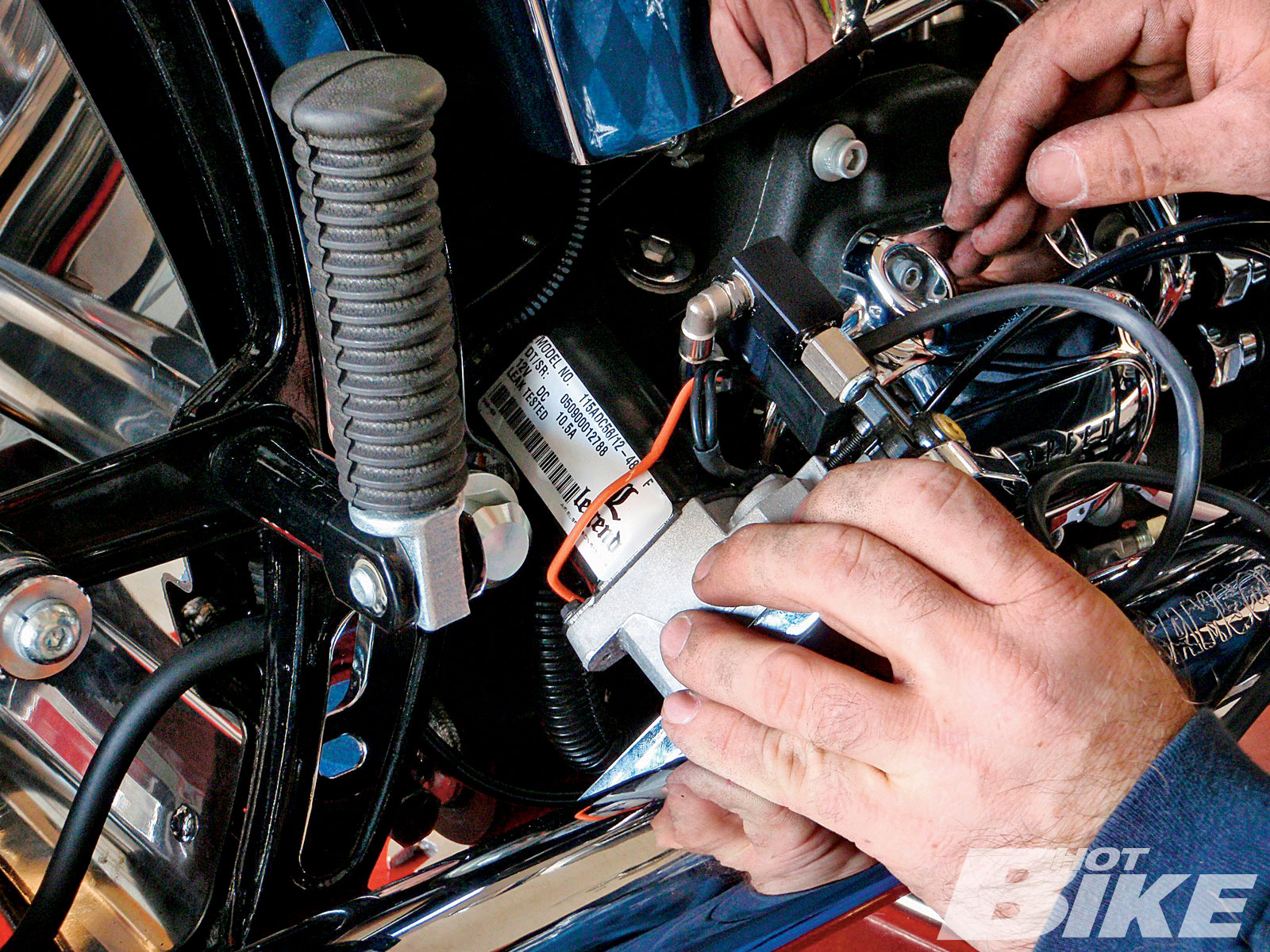 08. We then slid the compressor assembly into the frame. Depending on your setup you may need to reroute or manipulate some electrical or brake lines to slide the assembly into place. 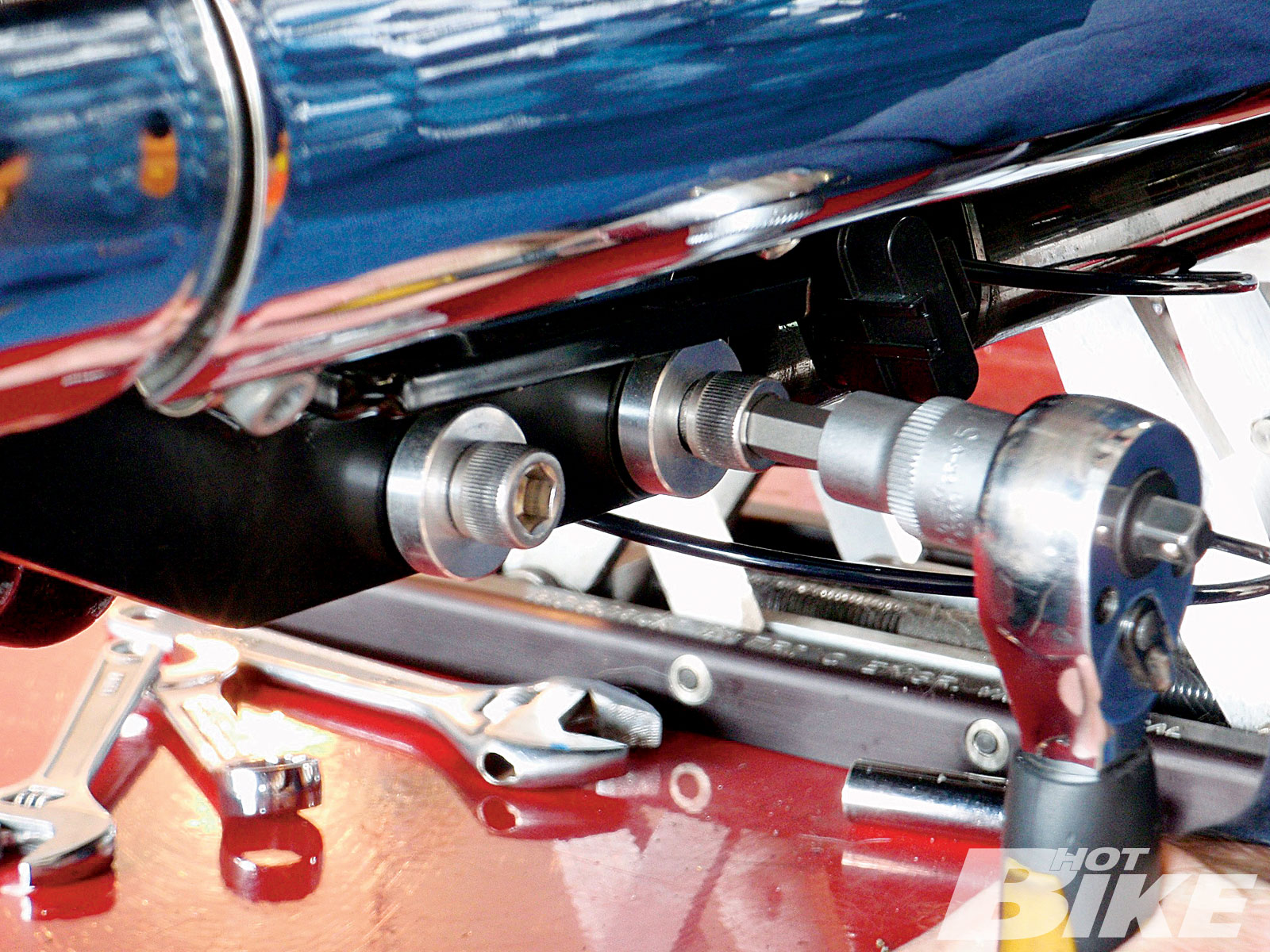 09. The pump mount fit between the right-side framerail and exhaust support bracket. Legend’s supplies 1-1/2-inch exhaust mount bolts to accommodate the thickness of the pump mount. However, the exhaust bracket for the aftermarket fishtails on this bike had spacers welded to it so we picked up two 2-inch bolts to secure the pump and exhaust to the frame. 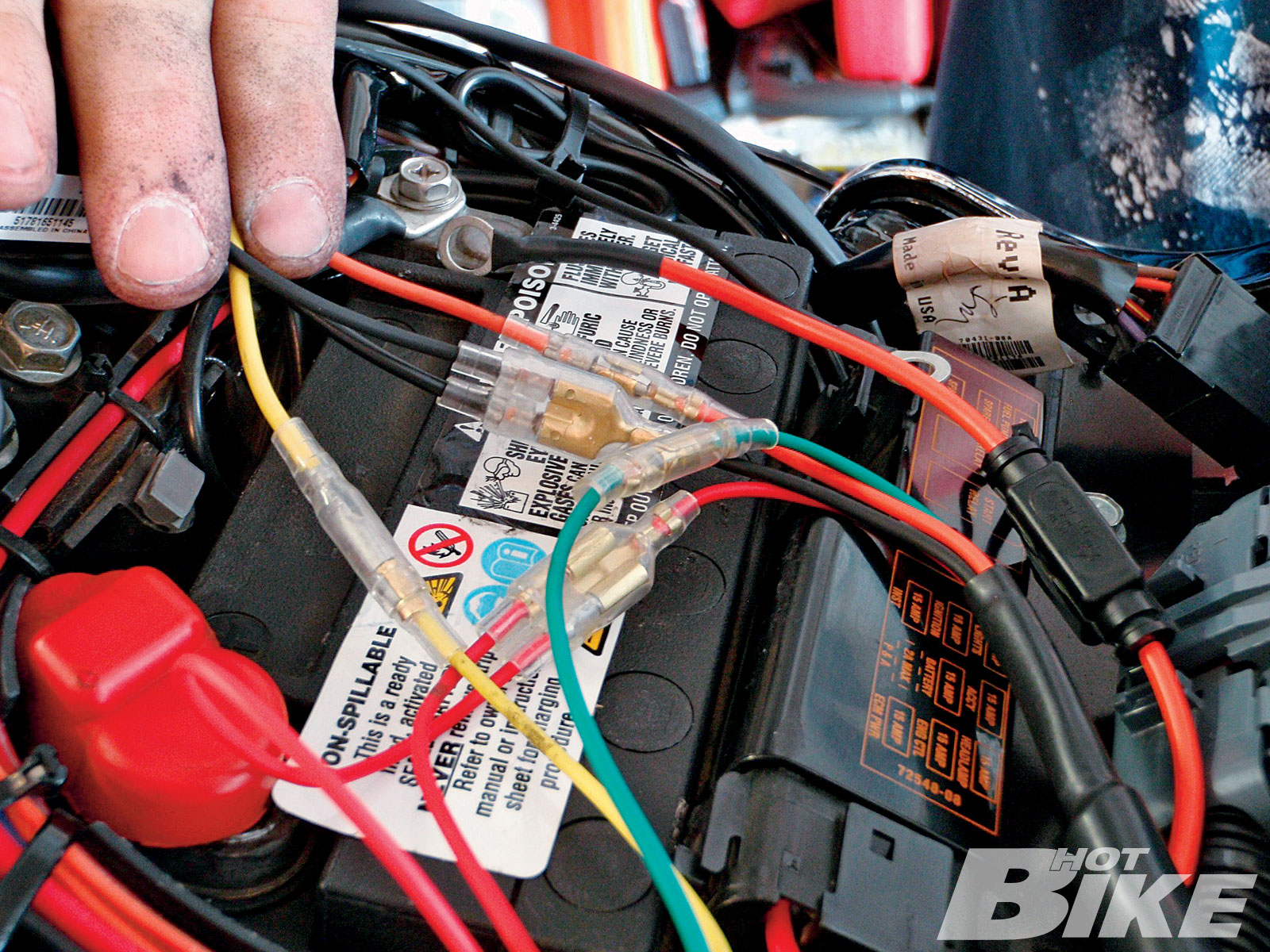 10. We then made all the wiring connections between the switches, relay, fuse, air compressor, and battery. Legend’s has made wiring as simple as possible by making all the connections color-coded and plug-and-play. 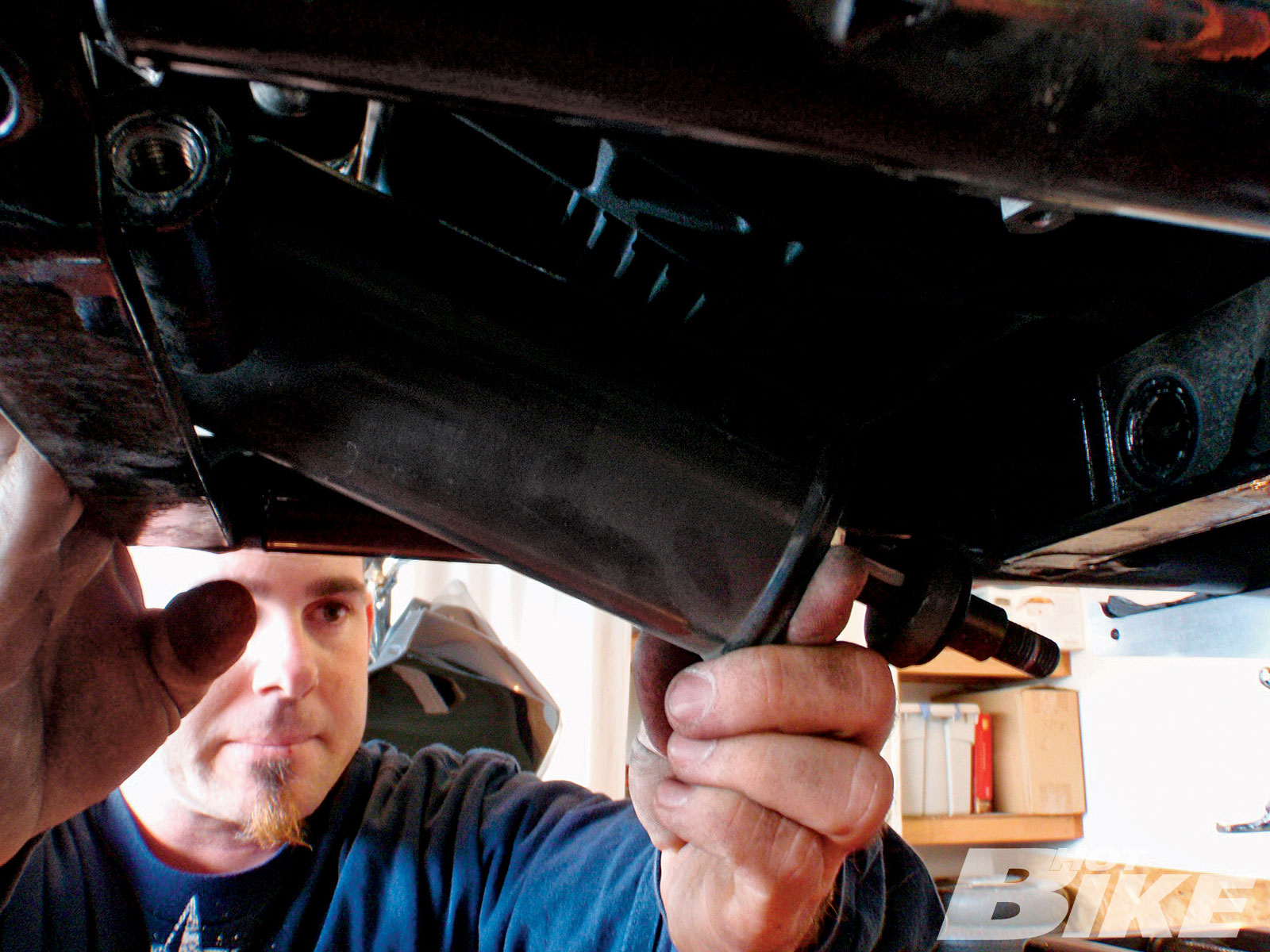 11. We then unbolted and removed the stock shocks. 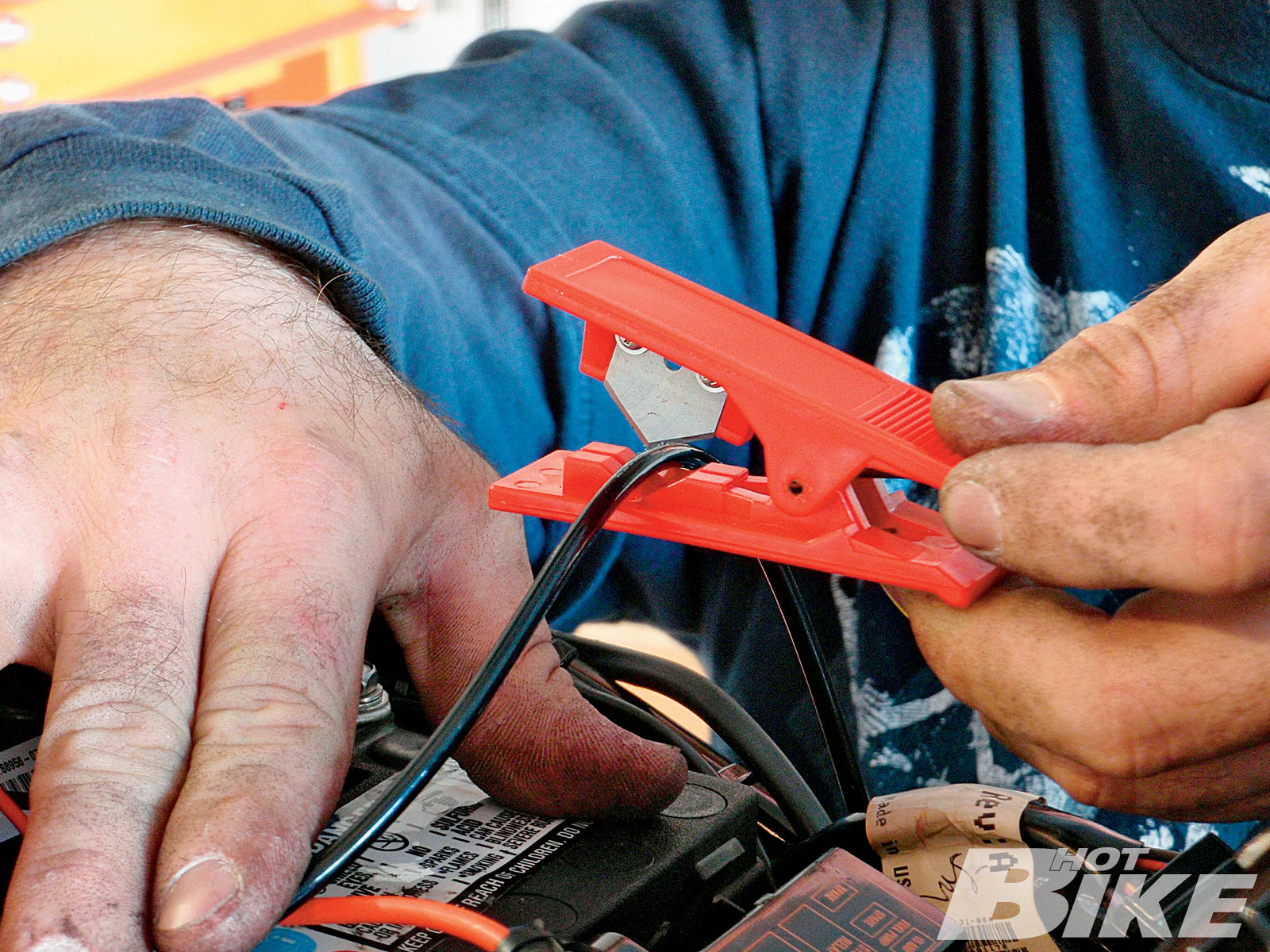 12. Next, we planned out our airline routing and made our cuts. The key to reducing the possibility of air leaks is to make a clean 90-degree cut on the airline. The supplied cutter makes this task easy. 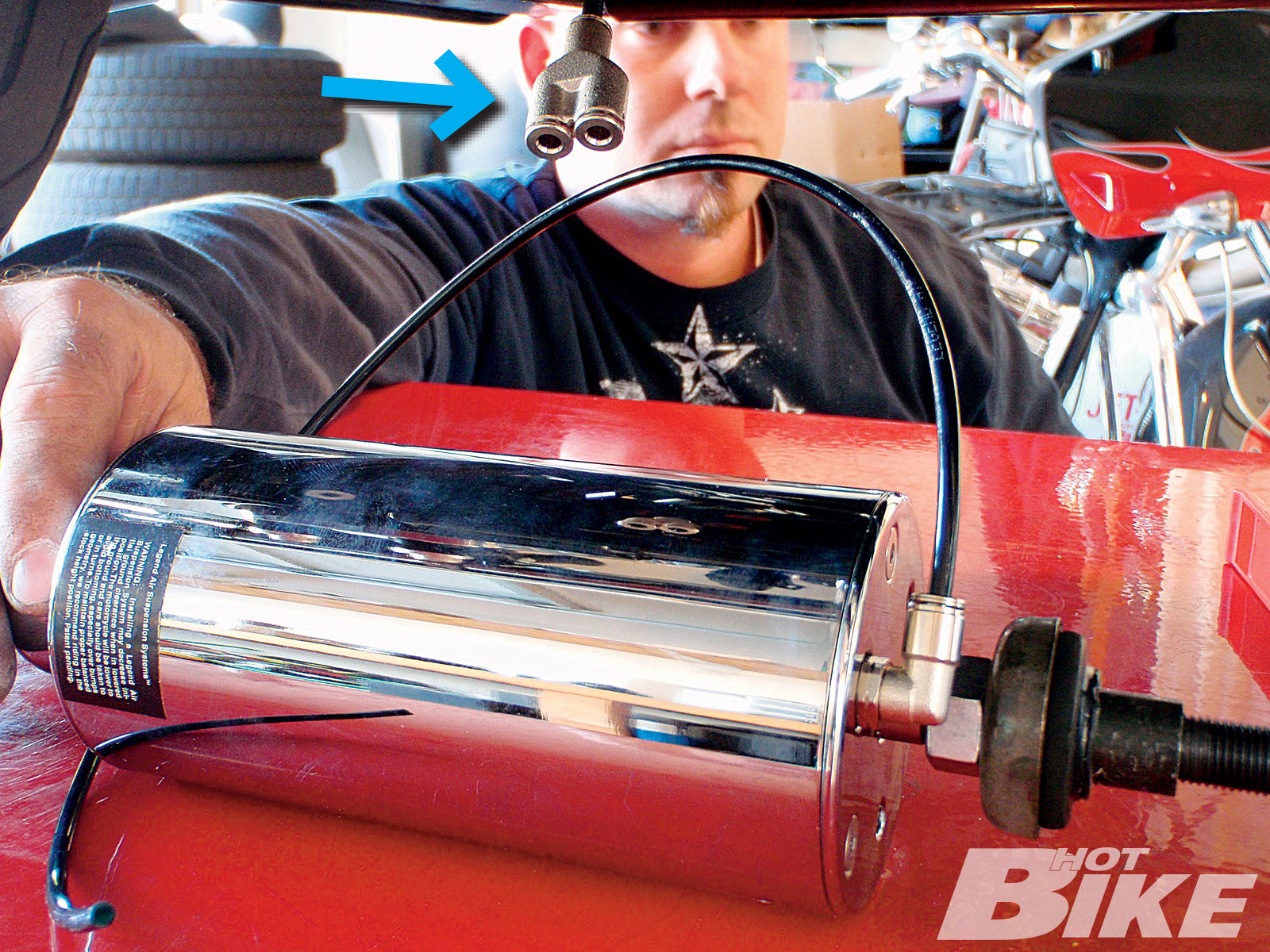 13. We then connected the Y fitting (blue arrow) to the airline coming off the air compressor and routed it down by where the shocks will mount. Next we cut two equal-length pieces of airline and connected them to the fittings on the shocks. 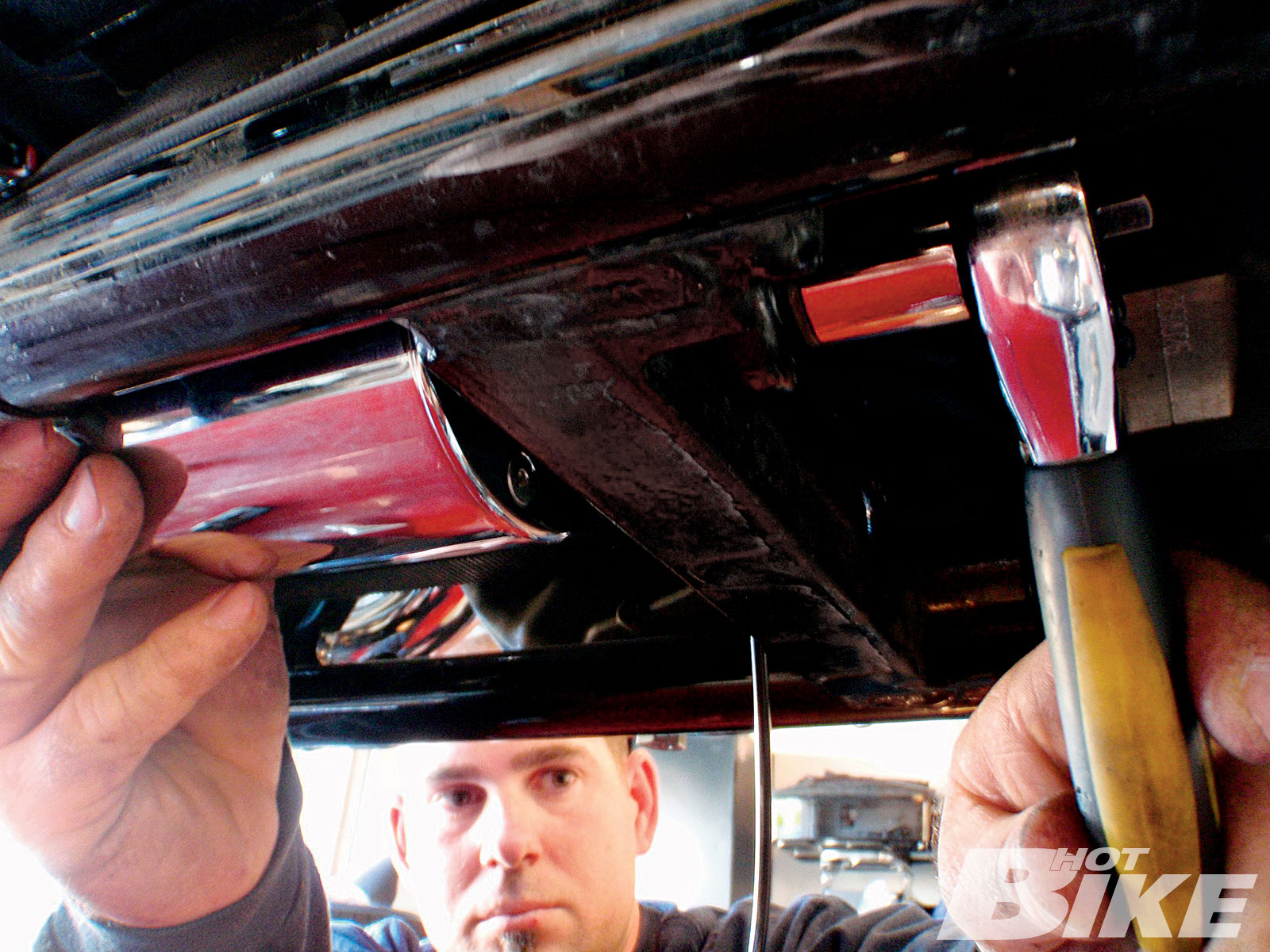 14. The right side shock was then placed up between the frame and swingarm. Utilizing the stock shock hardware, we then secured the shock into position making sure we used thread locker on the fasteners. 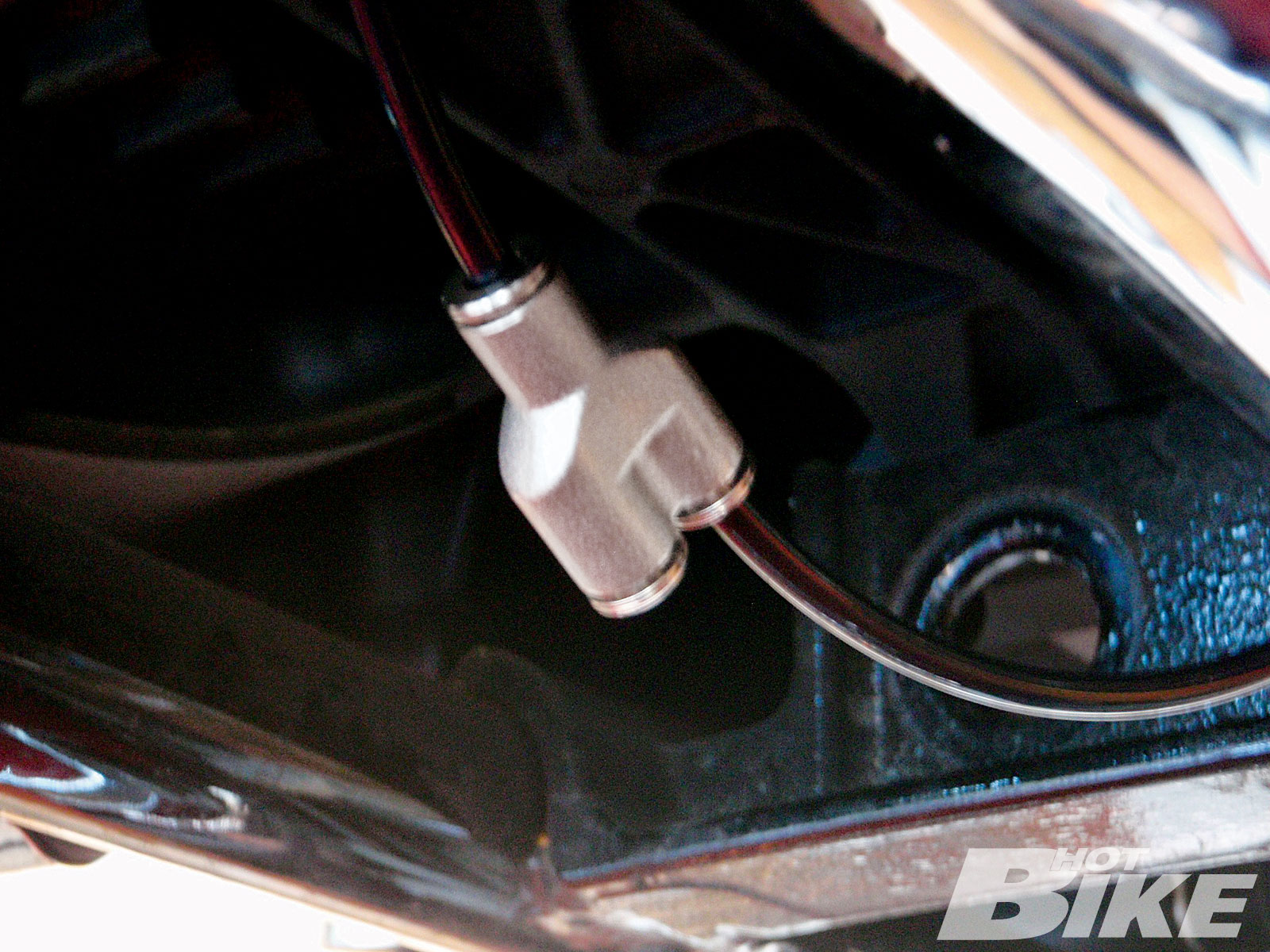 15. We then connected the right shock airline into the Y fitting and repeated the same procedure for the left side shock. 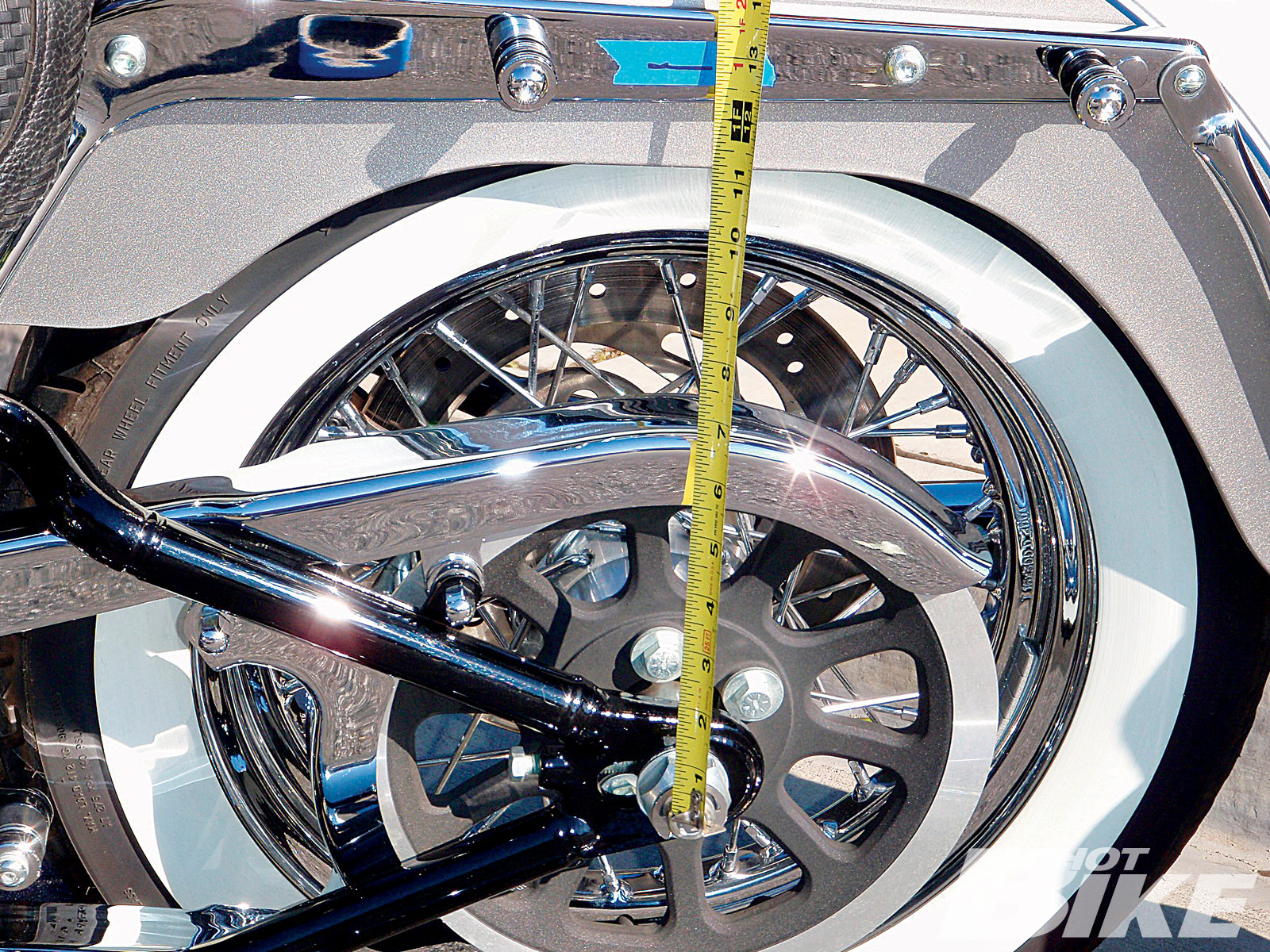 16. With the shocks mounted and airlines zip tied and secured out of the way of any road debris (the Y fitting was zip tied back by the compressor), we installed the 20-amp fuse and the install was complete. Here is how the rear of the bike sat with the stock shocks. As you can see it measured about 12 3/4 inches from the center of the axle to the mark on the fender strut. 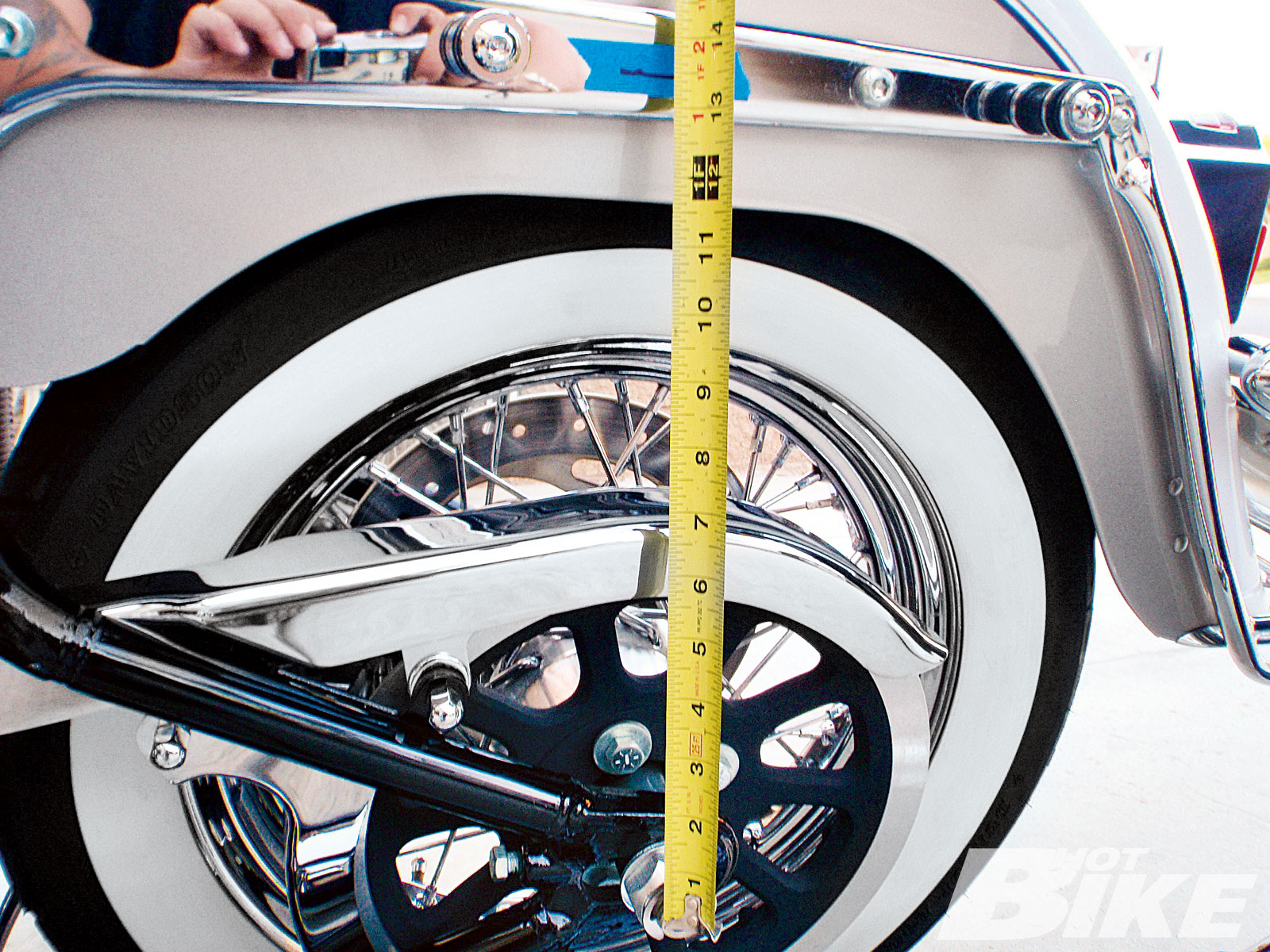 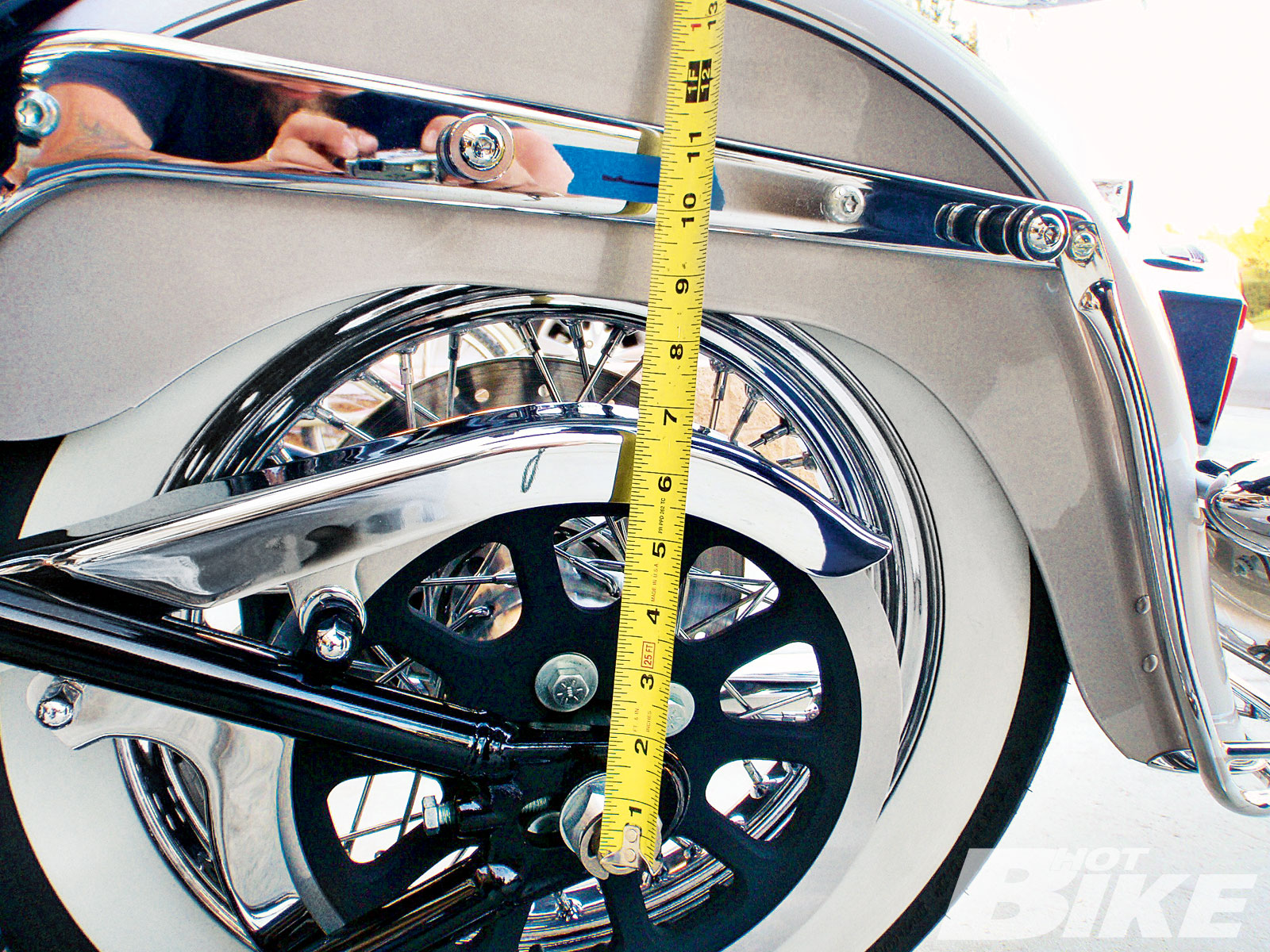 18. With it completely aired out, it dropped down to about 10 1/2 inches from the center of the axle to the mark on the fender strut, providing about 3 inches of adjustment. After putting some miles on the bike, the owner told us he noticed an immediate improvement in ride quality. The ride was much more plush and some of the bumps he was used to getting a hard jolt from were basically gone. In fact he said the ride was so smooth in the rear that now he all he does is focus on how rough the front suspension is. He was really impressed with how the bike handled loaded down with a passenger and/or luggage-the ride was just as smooth and his passenger never complained of any hard hits to the butt or spine. To see videos on this, check out hotbikeweb.com, LAS also has quite a few videos on its site on its various systems, so be sure to check those out as well.

In the February issue we showed you how to lower your bike quickly and inexpensively with a spacer kit from Blazing Bikes. But what if you’re looking for more out of your suspension, specifically on-the-fly adjustment, improved ride quality that is smoother than stock, the ability to adjust to your preferences or setup (soft or stiff, solo or fully loaded with a passenger), and on top of all that the wow factor of dropping the rear of your bike to the stops when you get to your destination. If this is the case, then an air ride system is what you’re looking for. When searching air ride systems one of the top companies that comes to mind is Legend Air Suspensions (LAS). Ever since its first Softail system, the L8, was created and immediately lauded by the industry, LAS has become known as one of the top air ride manufacturers.

In 2000 LAS improved upon its original Softail design with its L9/L3 (pre-’00/’00-later) units which house the Kevlar-impregnated rubber springs in a protective metal housing, and are more compact offering a more universal fitment, and better ground clearance. Comprised of high-quality US components (the only thing that’s not made in the US is the rubber air sleeve which comes from its supplier, Vibra Acoustics-formerly Gates) the LAS kits come with everything you need to install the system in five basic steps. LAS made installation relatively quick and easy by providing a frame-mount bracket for the pump (instead of having to pull the rear wheel to mount the pump like other kits) and making all the wiring color-coded and plug-and-play. The kits are available for both pre-’00 and ’00-later Softails-as well as many other Harley models-with standard black components, or you can upgrade the shocks, pump mount, and handlebar switch assembly to chrome for an additional cost, and all come with a lifetime warranty.

Aside from having the on-the-fly adjustability, LAS also put a lot of time and effort into creating a system that provides great ride quality. They achieved this with a separate air spring and hydraulic oil/deflective disc damping design. While the air spring provides the ride-height and absorbs some of the bumps, the oil/deflective disc damping is the key to a smooth and plush ride. The deflective disc damping system has been properly damped for each model and is velocity sensitive, meaning it can adequately handle sharp/deep jolts or repetitive bumps smoothly. Once installed the system provides about 3 inches of adjustment, and if by chance there’s a failure and the system completely loses air, LAS incorporated stops into its kits to match the built-in bump stops on stock bikes so that the tire won’t bottom out into the fender. It should be noted however, that LAS informed us that it designed its kits for use with stock tire/wheel sizes, so if you are running larger wheels, you might experience tire rub when fully aired out.

Follow along as we show you the install of one of LAS’s chrome L3 kits on an ’09 Softail Deluxe.