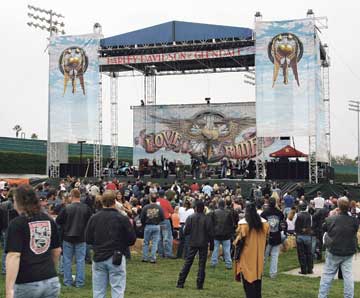 Also adding superstar wattage to LOVE RIDE 25 is Jay Leno, who’s served as Grand Marshall since the inception of the ride. Once again, he’ll preside this year as approximately 25,000 bikers from around the world – including a host of celebrity riders – convene in Glendale, CA for the revved-up benefit, which has raised over $20 million for various charities throughout the years. In keeping with tradition, riders will start their engines at 9AM at Harley-Davidson® of Glendale (3717 San Fernando Rd., Glendale, 91204) and parade up Glendale’s main drag, Brand Boulevard, before making their way over to Pomona, where Fairplex gates are scheduled to open at 10AM.
25th
Founder & Chairman Oliver Shokouh, owner of Harley-Davidson® of Glendale, launched the LOVE RIDE in 1984 as a means to raise much needed funds for the Muscular Dystrophy Association. The annual event now channels funds to a diverse array of non-profit organizations, mostly local Southern California and children’s charities. With everything planned for this year, LOVE RIDE 25 is poised to break all previous giving records.

Shokouh, who was inducted into the prestigious Sturgis Motorcycle Museum and Hall of Fame in South Dakota in honor of his remarkable accomplishments with the LOVE RIDE, commented, “More than anything, we see LOVE RIDE 25 as the beginning of the next twenty-five years, not as a cap to what’s behind us. We’re committed to sustaining this long into the future, and to taking full advantage of the extraordinary opportunity we have to help as many people as possible who are less fortunate. I couldn’t be more grateful to the amazing people who are making this year’s event so special.”

Event, entertainment and scheduling details will be announced as soon as they are available. Tickets may be purchased at Harley-Davidson® of Glendale and through Ticketmaster (www.ticketmaster.com) after July 26.