A drag-inspired power cruiser that can handle the twisties

Power corrupts good motorcycles just like it does good men. Too often when an OEM goes to make a “power cruiser,” you end up with the same formulaic composition of classic cruiser style and aggressive drag lines that result in a rake that’s too long to easily drop into turns and a rear tire that’s so wide it’s hard to stay in them. Harley-Davidson’s engineers have managed, however, to pull off the task of achieving the look without making a straight line bike. The 2019 FXDR 114 nails the drag styling that made its predecessors like the Breakout and the V-Rod so popular, but radically increases handling capabilities through new geometry in the triple trees and a cast aluminum swingarm.

The FXDR is the first bike to come out of the new softail line that isn’t really a Softail in the traditional sense. The cast aluminum swingarm is a much larger, stronger, more stable piece than the mock hardtail swingarm for which the model line is named, but when replacing the Dyna, certain sacrifices may have to be made in the name of performance. And in this case, I doubt anyone is really complaining. In updating this piece, the engineers also had to mount the rear shock a little bit higher, meaning the receiving end of the shock is unique to this model as well, and it sits a little bit higher than the rest of the Softails, which range from 4.5 to 5.1 inches, but 5.3 inches for the FXDR 114. It’s also the only model in the line that isn’t even offered in the 107ci displacement, but the whole bike was designed to look fast and handle that power, and it does a damn fine job. 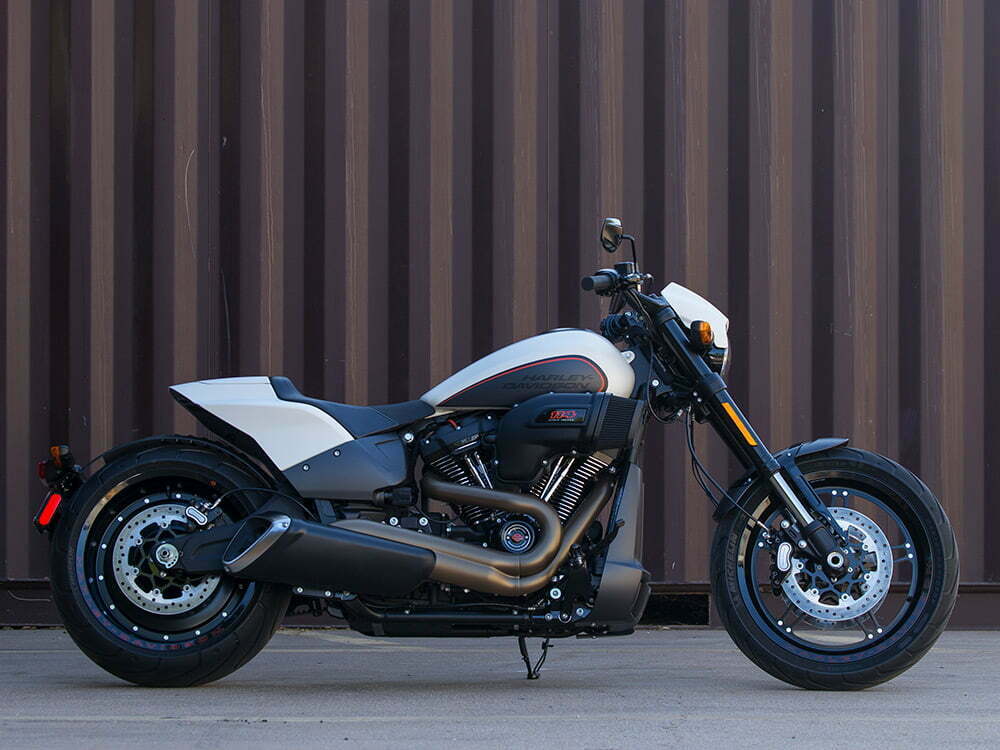 As we left the parking lot the morning of our initial ride, there was a skepticism in the air about the specs and claims of great handling at our dinner the night before. I wasn’t the only one who thought this bike was going to be a slug in the corners, but fortunately we were proved wrong very quickly. As we headed into the canyons of Ojai, California, speeds increased and civilization faded from our rear views. From wide sweeping turns to the tightest hairpins, we were tip-to-tail chasing each other through the turns. The fight we expected dropping in to turns was barely existent. The expected force of traction hitting on that 240mm rear tire and forcing the bike upright isn’t there. I mean, there’s some, but it isn’t nearly as bad as the other bikes with the same rake. 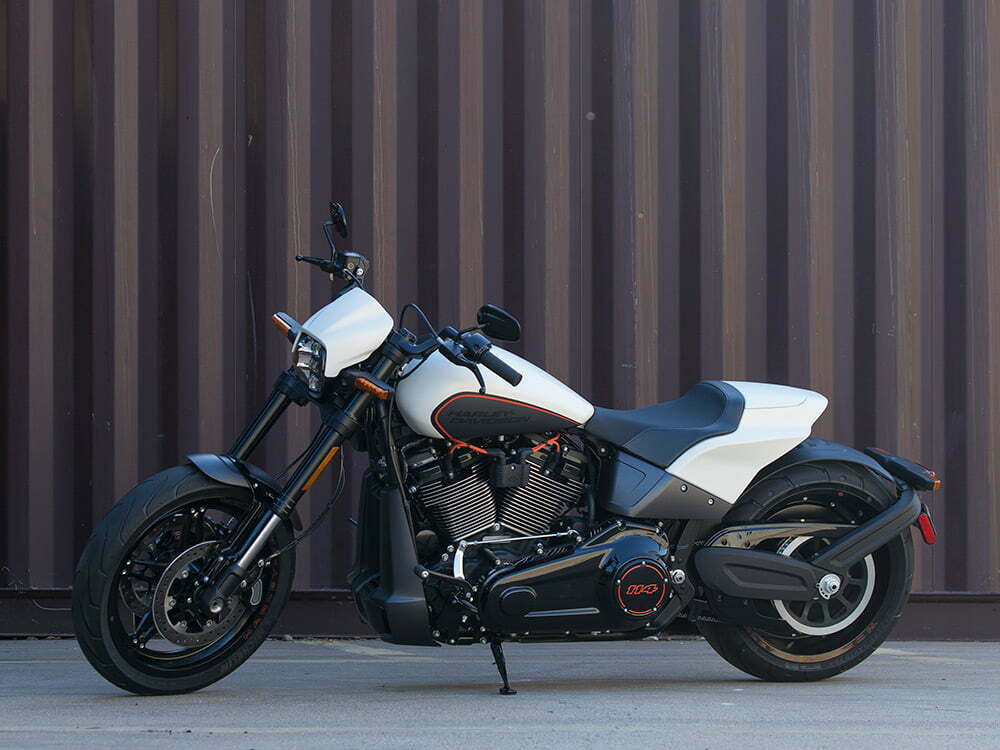 The adjustment we feel was made by significantly shortening the bike’s trail in the triple trees. This moves the fork back relative to the neck and shortens the amount of tire on the road in front of the wheel’s axle, meaning less friction in the direction the bike is traveling, so less force holding the front wheel straight, which translates more responsive handling. So while the FXDR 114 does have the same 34-degree rake as the 2018 Breakout, the trail of 4.7 inches is a full inch shorter than that of the Breakout, and even significantly shorter than the most aggressively raked model of the lineup—the Fat Bob, which sits at 5.2 inches. 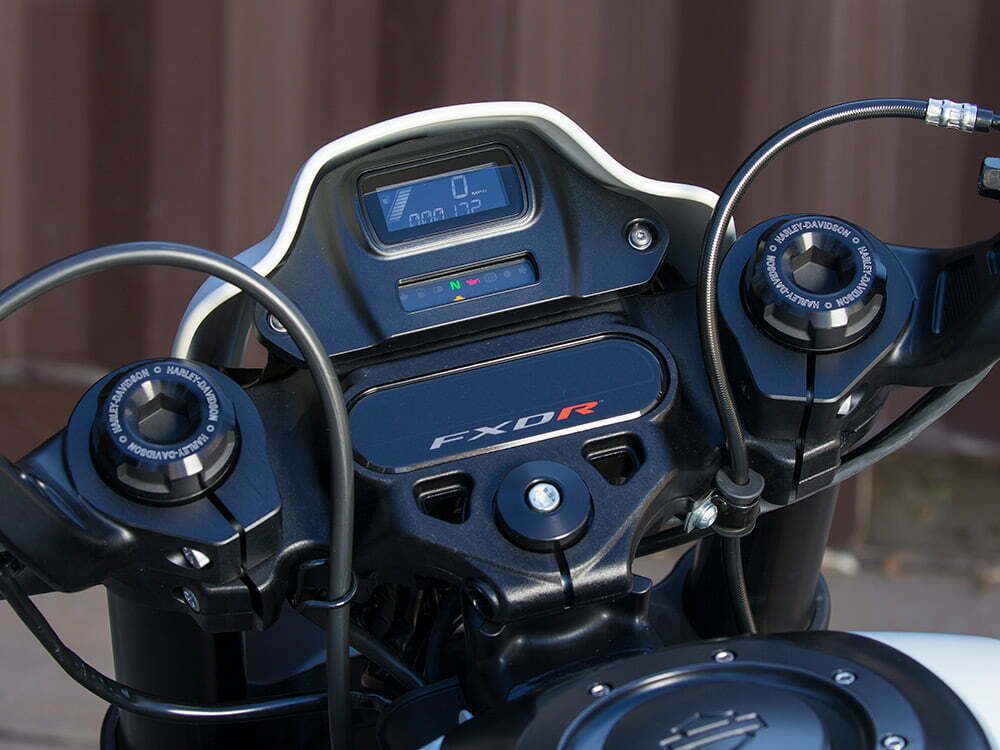 Styling on the FXDR 114 is unmistakably drag racing inspired, but with a little hint of H-D’s modern flat-track racing accents thrown in there too. The tailsection sits higher up, so a long plastic piece over the rear tire keeps water from running up your back when you go over puddles. The long inverted fork sticks out through the top of the trees, where clip-on handlebars attach—another sporty touch. The sleek digital gauge we saw introduced on the Street Bob last year makes its way to this new bike as well, not mounted behind the cowl on the triple trees. 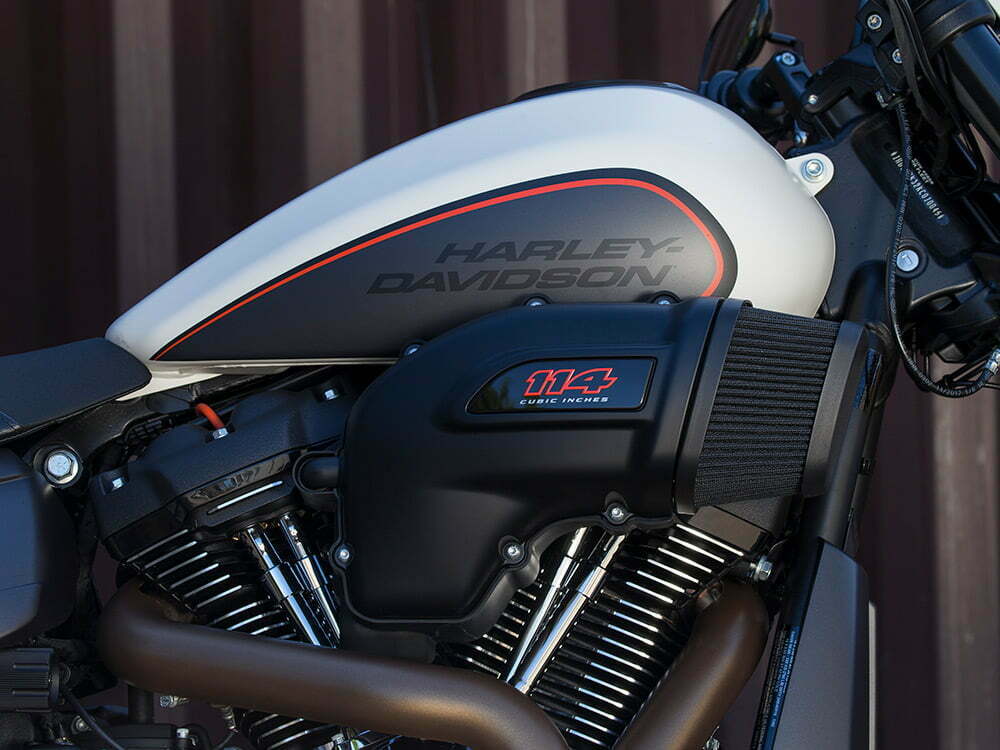 The factory upswept intake with exposed filer is a departure from traditional Softail styling.

The inverted 43mm fork does a great job at holding the bike steady, eating the small bumps and holding the front tire on the road. The rear monoshock’s preload is adjustable by hand under the seat, and combined with the wide seat, was comfortable enough to ride all day without getting saddle sore and still firm enough through the turns. Dual front disc brakes and a single rear stop the bike adequately, are smooth and responsive, and there isn’t too much dive up front. 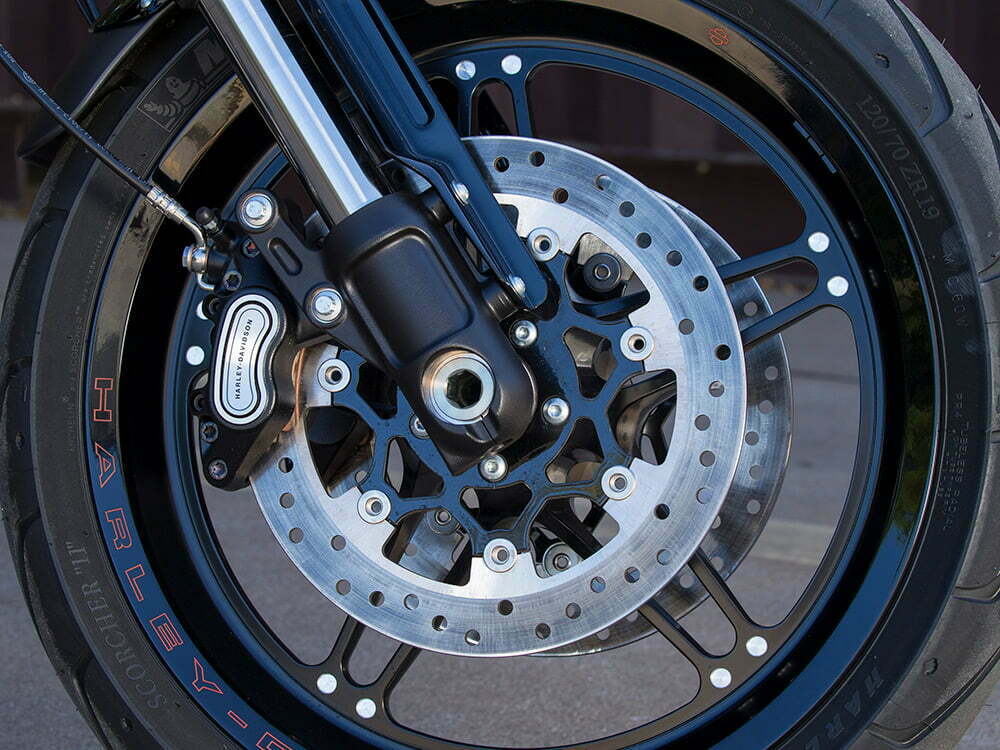 When it comes to the feel of the ride, the closest bike I have ridden is Keanu Reeves’ personal Arch KRGT-1, but that will run you upwards of $78,000. This is a well-thought-out, properly engineered bike with performance that can actually back up its aggressive styling. For a starting price of $21,349, it’s the most expensive bike in the Softail line but I would also wager to say the most capable. If you’ve been waiting for a bike to replace the V-Rod, you’re about to be in for a very nice surprise—a bike that can really handle. 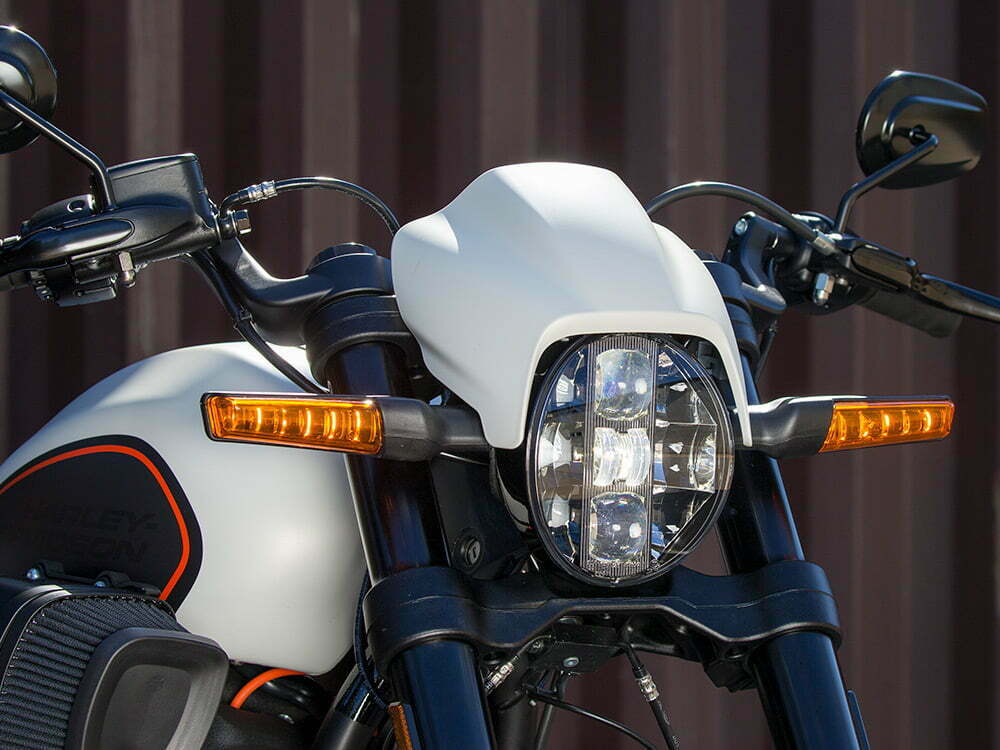 A tight view of the FXDR 114 frontend and new cowling. We feel the front turn signals could be trimmed down a bit. 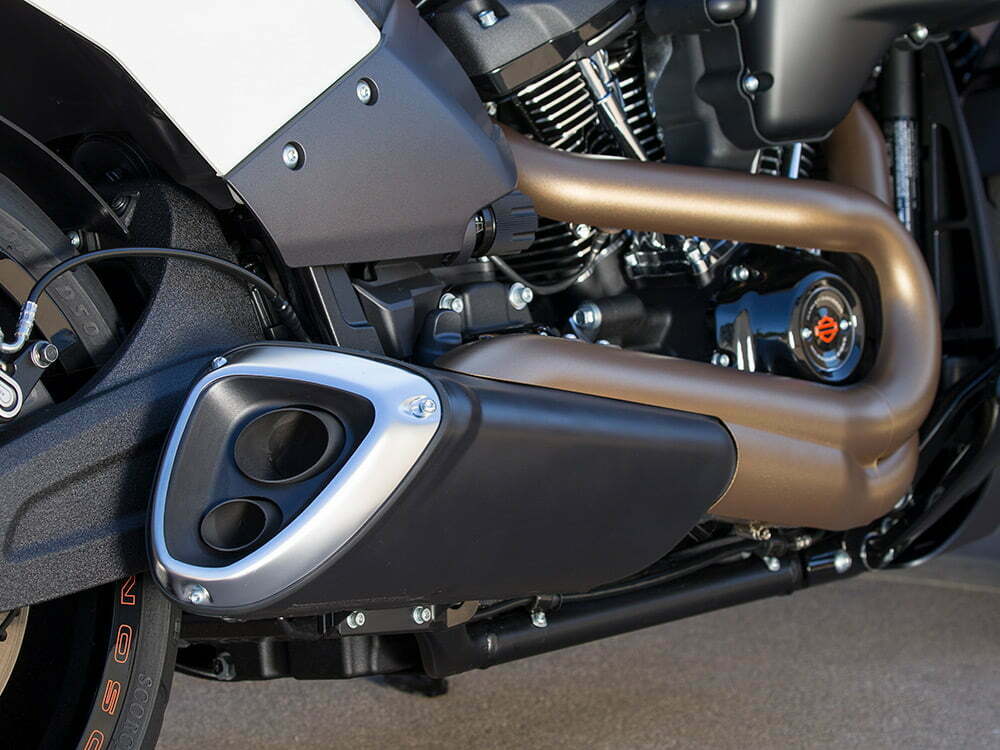 A stylish 2-into-1 exhaust with the catalyst inside the header handles spent gases for the FXDR 114. 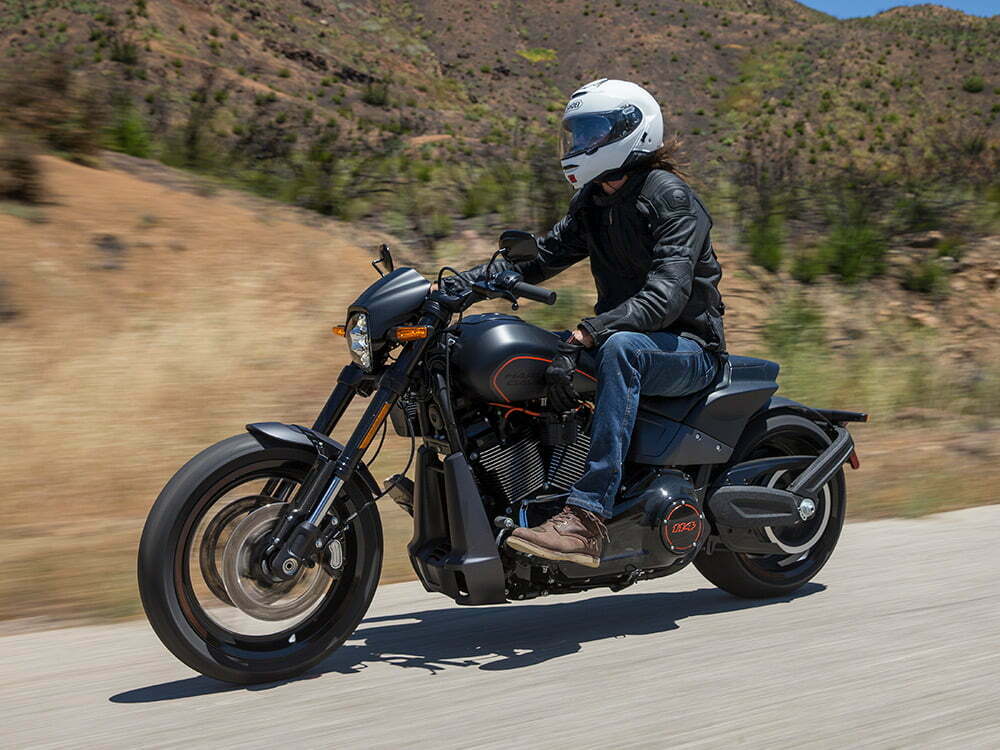 The Harley FXDR 114 offers straight line performance while also being a very capable power cruiser in the twisties.